20 Photos of 1970s Home Décor to Overwhelm You With Nostalgia

If you didn't have a bean bag chair, did you even live through the '70s?

Imagine yourself back in the 1970s for a moment. Neil Diamond is playing on the turntable; you and your friends are relaxing on the shag carpet in your living room; and over in the kitchen, the Harvest Gold rotary phone is ringing and it might just be the boy or girl you like. Yes, the 1970s were a simpler time.

But just as the decade was defined by its music, movies, and fashion fads, anyone who grew up during the '70s would also agree that there were some very memorable interior design trends. Herein, we're taking you on a trip down memory lane with the most iconic 1970s home decor—some of which we hope comes back in style, and other designs we never want to see again.

In the 1970s, swinging wasn't just for children on the playground. With the creation of Nanna and Jorgen Ditzel's Hanging Egg Chair in the late 1950s, adults too were also able to partake in the thrill of dangling in the air—and in style, no less! 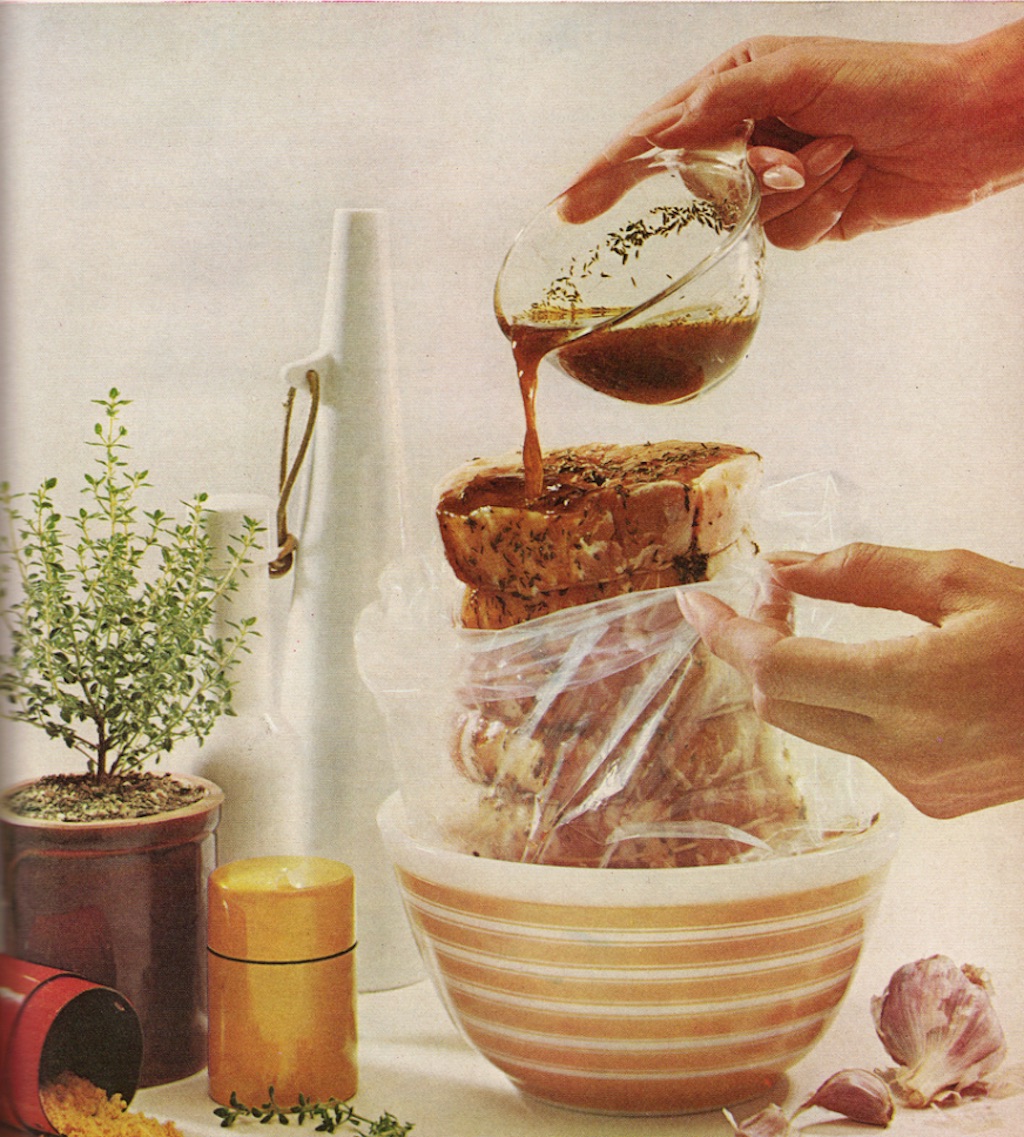 Pyrex might not have caught on right when it hit the market in 1915. But when it finally started to resonate with consumers in the 1970s, it was as if the world of home cooking had completely been transformed.

"It changed the way people thought of cooking dishes," Regan Brumagen, reference librarian at the Corning Museum of Glass, explained to Bon Appetit. "It's not this ugly tin pan that's coming out of the oven. It has elegance and style. You can serve it right on the table."

In the 1970s, you didn't wear your heart on your sleeve; you wore it on your bedroom walls. Teens and tweens at the time covered their bedrooms in posters of their favorite bands and actors, ranging from David Bowie and Led Zeppelin to Barbra Streisand and Burt Reynolds.

Though European royalty was getting ready in front of vanities centuries ago, it wasn't until the 1920s and 1930s that these mirrored pieces of furniture made it into American households. "Luxurious dressing tables came to epitomize the modern concept of glamour and luxury," notes a description for the Metropolitan Museum of Art's exhibit Metropolitan Vanities: The History of the Dressing Table.

By the '70s, the mirrored dressing tables were everywhere, and Raymond Loewy's design was the most sought after of all. Pictured here is Samantha (Elizabeth Montgomery) on the '70s hit Bewitched fixing her perfect flipped 'do in front of her mirrored vanity.

The wicker furniture that we keep outside today was actually quite popular in living rooms during the 1970s.

Alongside the insurgence of antiquing during the decade, wicker made a comeback—despite the fact that the material had an irritable tendency to poke and prod at whoever sat on it.

If you grew up in the 1970s and you weren't a fan of avocado green, then you were pretty much out of luck. From Pyrex and aprons to cabinets and wall paneling, nearly everything manufactured during the decade came in this not-so-subtle shade of green. Here it is featured on an episode of the beloved '70s series Charlie's Angels.

According to appliance manufacturer Big Chill, the rise in avocado green's popularity could largely be attributed to "a new regard for nature and environmental concerns" during the '70s.

Homeowners in the '70s didn't have to worry too much about choosing the right paint colors; they had wood paneling (as featured on the walls of the iconic 1970s Brady Bunch home, pictured here).

Despite their name, though, the material used to make these panels usually wasn't wood; rather, it was typically either plywood or fiberboard designed to resemble the real—and more expensive—original.

Having to walk down a few steps to get to your living room was commonplace in the 1970s, as you can see here on The Mary Tyler Moore Show. And, according to Realtor.com, we have Bruce Goff to thank for what was called the "sunken" living room. The architect designed a house in 1927 with a sunken area in the middle of the living room that he dubbed a "conversation pit."

And by the 1970s, architects Eero Saarinen and Alexander Girard helped catapult the trend into the limelight. They incorporated this new design into some of their most famous work in the '50s and '60s, most notably Indiana's Miller House and the TWA Terminal at JFK airport.

In addition to avocado green, another earthy tone that took over 1970s home decor was harvest gold. Here you can see it in the Formans' living room on the period series That '70s Show.

"Harvest gold, burnt orange, and tortoise shell were… key kitchen and appliance colors," explain Leatrice Eiseman and Keith Recker in their book Pantone: The Twentieth Century in Color. However, "the rigor of maintaining an all avocado and harvest gold home was perhaps too much for mainstream consumers, and the palette fell out of favor by the end of the decade."

Hanging above the uncomfortable wicker chairs and bold harvest gold couches in most '70s homes was a sunburst clock or mirror.

Designed by Nelson Associates in 1949, this retro timepiece fit in well with the Art Deco revival of the '70s.

Though macramé plant holders and wall hangings are quite modish this millennium, the woven wall art trend actually belongs to the 1970s. Here's an example behind a spying Janet (Joyce DeWitt) on the '70s-'80s series Three's Company.

"Every groovy apartment in the 1970s had its fair share of hanging art called 'macramé,' which was handcrafted and lovingly hung as (sometimes) functional home decor," noted one writer in The Denver Post.

The 1970s were a big time for ceramic and porcelain accent pieces, like lamps, vases, and wall art (seen here in the movie Casino, which is set during the decade).

It was during the '70s that artists like Rupert Spira, Lucie Rie, and Hans Coper rose to prominence, and their ceramic contributions to society helped to catapult the art into the spotlight.

Floral prints were just as ubiquitous in 1970s homes as they were in 1970s closets. And while the florals of the '50s were stuffy and proper, the flower power of the '60s and '70s was big, bold, and bright. Colors like mustard, orange, and avocado green were often featured prominently on floral bedspreads, curtains, and couches.

Check out this one behind the Fonz (Henry Winkler) and Mork (Robin Williams) during a Happy Days-Mork and Mindy crossover episode in 1978.

No groovy '70s pad was complete without at least one five-fingered hand chair. The unusual design was produced and perfected by Mexican artist Pedro Freideberg, whose training as an architect influenced his foray into funky but functional works of art like this one.

In a 1973 episode of The Odd Couple, Felix (Tony Randall) famously gifted Oscar (Jack Klugman) with a pair of hand chairs, as you can see here. "They're hands! I feel like an M&M," Oscar joked sitting in it.

While its official name might be up for debate—it's been called the pod chair, the globe chair, and the egg chair—its influence on 1970s home decor certainly isn't.

This chic oval chair was first designed in 1963 by Finnish furniture maker Eero Aarnio. But the egg shape that was popular in the '70s wasn't created until 1968 by Danish designer Henrik Thor-Larsen. Here's an example in the '70s-set movie Dazed and Confused.

Do shag carpets shed? Yes. Are shag carpets easy to clean? Absolutely not. However, folks living in the '70s didn't seem to mind either of these facts because it was easily the most popular flooring choice at the time. (Here's some carpeting as shaggy as David Cassidy's hair in The Partridge Family house in the 1970s.)

"From room to room, these fluffy rugs could be found in spectacular shades of hot pink, sunshine yellow, baby blue, and snowy white… or in gold, olive green, rusty brown, and sea blue (fashionable during the earthy 1970s)," notes David Mansour in his work From Abba to Zoom: A Pop Culture Encyclopedia of the Late 20th Century.

In the mid-20th century, "greater use of color for floor and surrounding wall materials also occurred," write the authors of Kitchen and Bath Design Principles: Elements, Form, Styles. Well, that's an understatement. The '70s were a time when homeowners and architects began to experiment with patterned tiles. On the outside of the tub, adorning the walls, lining the floors—if it could be covered in tessellated tile, then it was.

While Jennifer Lawrence wasn't alive in the 1970s, her character in the period movie American Hustle certainly was and she loved patterned tiles, as you can see here.

For most of the 20th century, plaid was only popular in places like Scotland and England. However, that all changed in the 1970s when tartan took over in the United States as the pattern of the decade.

Catherine Bach's Daisy Duke sporting a tiny plaid top on The Dukes of Hazzard on TV weekly in the 1970s definitely helped make this pattern cool.

In 1968, three Italian designers—Piero Gatti, Cesare Paolini, and Franco Teodoro—were commissioned by the company Sacco to design a chair that fit in with the counterculture of the time. The result? The world's first bean bag chair.

The youth of the '70s loved that the chair had a nontraditional and nonconforming shape (plus, it didn't hurt that the sacs were easily transportable in vans and cars). Here's a burnt orange one featured in a very '70s bedroom on The Mary Tyler Moore Show.

Afghan blankets were a staple of 1970s home decor, featuring the same chunky stitching of the popular crochet dresses and tunics during the decade. "If you grew up in the '70s, as I did, you might fear the granny square—if only because, for a while, clothing was made of nothing else," jokes Debbie Stoller in her book Stitch 'n Bitch Crochet: The Happy Hooker. "Granny square vests, granny square shorts, granny square hats."

Here's a granny square-filled afghan blanket keeping Bob Newhart cozy on his titular TV show in 1972. And to learn more about trends from the past, check out the Definition of "Stylish" the Year You Were Born.