9 Huge Stars That Started Out as Beauty Queens

From A-list actors to your favorite country star.

Some celebrities fall in love with acting after starring in their middle school's production of The Music Man, while others may get discovered at the mall. But another group of stars cut their teeth in the spotlight wearing sashes, gowns, and tiaras. It makes perfect sense that a beauty queen may eventually reach celebrity status. After all, competing in pageants prepares people for auditioning, meet and greets, and answering reporters questions on the spot. The pageant circuit also teaches you how to walk in heels, always look your best, and advocate for charitable causes. If you've watched Toddlers & Tiaras you know how much hard work goes into competing for the crown. So, we've compiled some of the most surprising celebrities that started as beauty queens, from Oscar winners to country stars.

READ THIS NEXT: Goldie Hawn Swears by This Grocery Store Product for Perfect Skin at 76.

Talk show host, actress, and everyone's favorite interviewer, Oprah Winfrey, got her start as Miss Black Tennessee in 1971. Who knew? According to her website, she took home the crown at the young age of 17. Winning the pageant led to attention from the local Black radio station, and she was hired to do the news part-time during high school. She credits her time as a beauty queen for setting the stage for her career as a reporter.

Before Britney Spears was singing Toxic she was taking home titles. The pop star most famously got her start as a member of The New Mickey Mouse Club alongside Justin Timberlake and Ryan Gosling. But before her Disney days, she was a toddler in a tiara, competing in Louisiana pageants starting at only three years old.

Unfortunately, the former Mouseketeer doesn't have the fondest memories of her beauty pageant days. In May of 2020 the Stronger singer posted about getting bangs and wrote, "Only pretty people in the south could do that and I never felt pretty enough to pull it off. All the beauty pageant girls did it but I never felt beauty pageants were my thing … I had bad teeth and felt like an ugly duckling."

READ THIS NEXT: For more beauty articles delivered straight to your inbox, sign up for our daily newsletter.

Vanessa Williams might be the most famous former pageant queen. In 1983, she became the first Black woman to be crowned Miss America, but she was dethroned when nude photos were published by Penthouse without her consent. But that didn't stop her from going on to having a long and illustrious career, acting in popular TV shows including Ugly Betty and Desperate Housewives.

Before winning American Idol in 2005, Carrie Underwood competed for Miss Northeastern State University in 2003. Unfortunately, the country singer came in second place at the time. The Oklahoma native received her journalism degree from the school and then went on to sing major hits including radio favorites Before He Cheats and Blown Away, so the loss was probably a blessing in disguise for the country crooner.

READ THIS NEXT: If You're Over 50, This Is the Piece of Clothing You Should Ditch.

Long before Halle Berry played Storm in X-Men, she had a few less superpowers but she was just as talented. The Academy Award winner first made her mark doing pageants in the 1980s. She won Miss Teen All-American in 1985, Miss Ohio USA in 1986, and was even the first runner-up in the Miss USA pageant in 1986. She came in 6th place in the Miss World pageant. In 2017, she shared a photo from her pageant days with the caption, "Where it all began. #FBF #1986 #MissWorld."

Michelle Pfeiffer looks like the ultimate California girl and in the 1970s was even named one. The Scarface actress won Miss Orange County as a teenager in 1978, and moved on to compete in Miss California before becoming an actress. In 2021, she shared a "Throwback Thursday" post of her pageant days with the caption, "Hey, we all gotta start somewhere." In the compilation, the 19-year-old is seen twirling in her sash.

Before Priyanka Chopra was a famous actress and the wife of a Jonas Brother, she was Miss World. The actress won the pageant in 2000 and before that competed for multiple lesser titles. During a 2021 interview, she spoke about Harnaaz Kaur Sandhu winning Miss India Universe and said, "I'm so excited for her and hope this is the beginning of an incredible journey."

Saved By the Bell star Tiffani Thiessen won the Miss Junior America pageant before she appeared on the iconic '90s show as Kelly Kapowski and won Zack Morris' heart. She started her career as a child model and competed in Miss Junior America pageant in 1987 before entering Teen Magazine's "Great Model Search" in 1988.ae0fcc31ae342fd3a1346ebb1f342fcb

READ THIS NEXT: 50 Essential Accessories for Women Over 50. 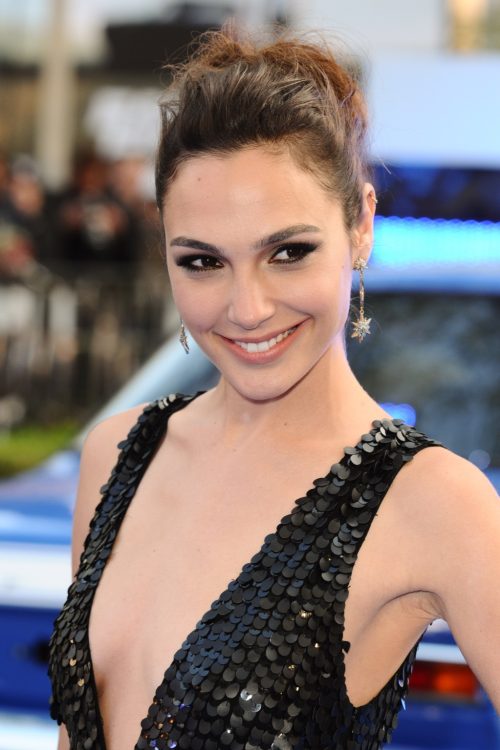 Gal Gadot isn't just Wonder Woman, she's also Miss Israel. The Israeli model and actress won Miss Israel in 2004 and then competed in Miss Universe. She later told W Magazine that it was all her mother's idea. "I got in and I never thought I would win and then I won and then it scared me. I was like, 'What? Miss Israel? All the responsibility of being Miss Israel?'"

She went on to admit, "I was very naughty. I wasn't behaving. I'm a really good girl but because I was afraid that I'm gonna win again, because I didn't want to win the Miss Israel pageant and then I won, I figured, 'Oh no, I don't want them to choose me again!' So I came down late to all the rehearsals and I wasn't wearing the right evening gowns for breakfast."

READ THIS NEXT: If You're Over 65, This Hairstyle Is Aging You, Experts Say.