Secondhand Stores Are Now Asking Customers to Do This ASAP

It might not be what you first expect, but stores are in need of your help.

Thrifters know how to score the best deals, truly living out the motto "one man's trash is another man's treasure." Locally-owned thrift stores, as well as bigger names like the Salvation Army and Goodwill, offer the ability to dig for hidden gems, whether you're in the market for a vintage outfit or a piece of furniture to restore. Secondhand stores are reliable for one-of-a-kind finds, and if you're lucky, you might have one located right in your hometown. But now, your trusty local hub might actually be in need. Read on to find out what thrift shops are asking their customers to do sooner rather than later.

READ THIS NEXT: Ex-Goodwill Employee Sends This New Warning to Shoppers.

Higher price tags are hurting everyone's wallets these days. Grocery bills and gas station receipts seem to just keep increasing, and experts, unfortunately, don't have an anticipated date for when we can expect to see prices return to "normal." Instead, fears of a recession are palpable, and interest rates continue to rise. On June 29, Federal Reserve Chairman Jerome Powell spoke on efforts to "restore price stability," but this comes in tandem with rising rates and, by extension, the risk of a recession, The Wall Street Journal reported.

With so much uncertainty, many Americans are tightening their belts. And according to reports from secondhand stores, they are feeling both positive and negative repercussions.

There has been a dip in donations.

With prices reaching 40-year highs, some shoppers are seeking out secondhand stores, which generally offer lower pricing for clothing and other preowned items. But with increased demand, these stores also need extra supplies—that's where you come in.ae0fcc31ae342fd3a1346ebb1f342fcb

As reported by Fox59, thrift shops in Indiana have seen donations slow down since they reopened following the pandemic. And due to rising prices, people might opt to wear last season's jeans or a worn-in pair of shoes for a bit longer, rather than give them away.

Ivan Cropper, a spokesperson for Goodwill, outlined the serious need for donations in conversation with Fox59, adding that they are "critical to our success."

But issues are not isolated to Goodwill, as the Salvation Army—which operates charity thrift stores—has also not been receiving as many donations lately, according to Fox59.

Thrift stores have faced these issues before, as many received fewer donations in 2008 amid the Great Recession, according to The New York Times. To prevent similar events from becoming widespread, secondhand shops are calling on residents to donate items they're no longer using or to make a monetary donation if possible.

According to Cropper, donating not only gives you an extra tax write-off but also helps to support your local community, as Goodwill is integral to the workforce in Indiana, employing nearly 4,200 residents.

Goodwill stores in one region are having the opposite issue. 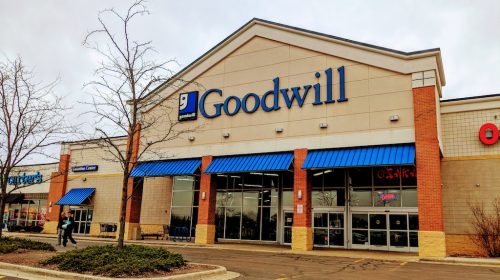 While some stores in the U.S. are struggling to keep enough inventory, tsome thrift stores in the northeast are facing different issues. Goodwill locations in Maine and New Hampshire have reported that they actually have too many donations. In light of this, Goodwill was forced to pause donations at all Maine stores and Portsmouth and Somersworth stores in New Hampshire on June 22. The stores will not be accepting donations until after July 5, as they have a large number of donations to sort through and limited staff to do so.

Contrary to the situation in Indiana, according to reporting by WABI, this is the first time since the pandemic that Goodwill stores in Maine have been forced to stop accepting donations.