This Is What Saint Nicholas Was the Saint Of

Though he's most commonly known as Santa Claus nowadays, the jolly bearded man who hands out presents on December 25th has picked up quite a few nicknames over the centuries, one of the most famous being "Old St. Nick." But while "Santa Claus" and "Saint Nicholas" are used synonymously today, there's a real Saint Nicholas in the history books—and it's thanks to his legacy that we have many of the modern Christmas traditions we know and love.

The original Saint Nicholas was born toward the end of the 3rd century A.D. in what is now Turkey. His parents had considerable sums of money, and Saint Nicholas—or the Bishop of Myra, as he was commonly known at the time—was apparently eager to part with it for the sake of others. It was that overwhelming generosity that led to his canonization and appointment as the patron saint of both children and the poor.

There are two famous stories that illustrate why this man was so beloved. 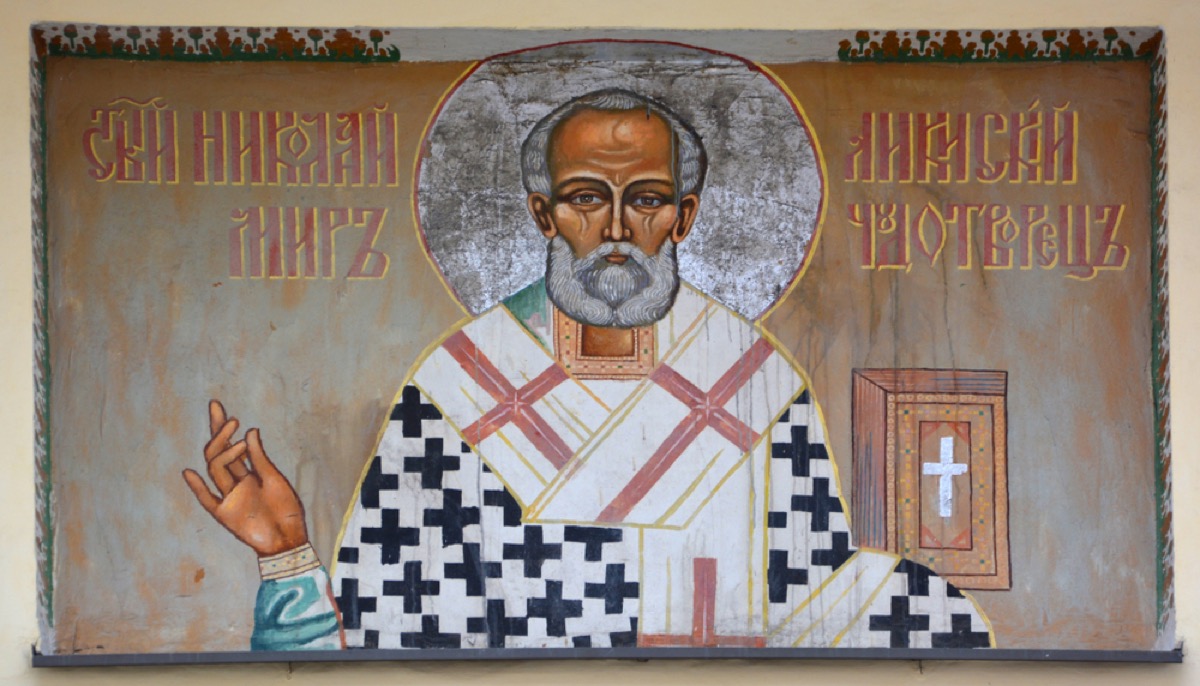 The first story—and the better-known of the two—involves the bishop discovering that a local father could not afford dowries for his three daughters. (Back in the 3rd and 4th centuries, not being able to afford your dowry meant that you would be sold into prostitution.)

According to legend, after hearing about the plight of the girls, Bishop Nicholas secretly tossed three bags of gold through the father's window in the middle of the night, preventing the girls from having to live out their lives as prostitutes. In other versions of the tale, Saint Nicholas actually tosses the bags through a chimney where they land in a sock that has been left to dry, allegedly the origin for the chimney-and-stockings mythology attributed to Santa Claus today.

In a lesser-known second story of his kindly acts, Nicholas entered an inn to find three murdered young boys in barrels in the basement. Not only did the bishop instinctively know that a crime had occurred, but he is also said to have brought the victims back to life.

"That's one of the things that made him the patron saint of children," Gerry Bowler, author of Santa Claus: A Biography, explained to National Geographic. In addition to performing these extraordinary deeds, Saint Nicholas was allegedly known to regularly participate in kind and generous acts, including surprising people with money during the annual December feast held in his honor—a major reason we associate Santa Claus with gift-giving in the modern era.

And while St. Nick is perhaps best known today for being the patron saint of children, the bishop is actually a patron for dozens of groups including businessmen, brewers, preachers, soldiers, travelers, virgins, and millers. Unsurprisingly, it is his kindliness to such diverse groups of people—combined with the surreal stories of savior and solace surrounding him—that have made the Christian figurehead so closely associated with Santa Claus, gift-giving, and Christmas. And for more holiday fun, discover the 30 Most Adorable Christmas Traditions That Make the Holidays Magical.