Politics aside, you can't deny the guy's sartorial mastery.

He's been called the greatest president of the past 50 years. He's also been called the worst one. But one thing he's never been called is "unfashionable." Yes, Barack Obama is, as described by the experts at Harper's Bazaar, "the most stylish president in recent history." And not for nothing: His wardrobe has scored multiple stories in Vogue—something few politicians can claim. In addition to being an unforgettable (to say the least) politician, Obama's polished, yet unpretentious clothing and grooming choices have made him a style icon in his own right.

"Overall, he is the most stylish president since JFK," says Dawnn-Karen, founder and CEO of the Fashion Psychology Institute and an instructor at the Fashion Institute of Technology. Just look at his everyday sartorial decisions: "Fitted suits during his speeches, wearing shades during his leisure time, and wearing a constant smile do make his style youthful, relatable, and likable."

However, his look wasn't always centered around custom suiting and sharply-maintained haircuts; in fact, Obama's style has evolved significantly over the course of his adult life, from casual looks in his younger days to the tan suit that set the airwaves ablaze in 2014. Take a walk down memory lane as we reflect on Obama's style evolution. And when you want to upgrade your own look, discover these 20 Easy Ways to Elevate Your Style Game Instantly.

As a high schooler in the 1970s growing up in Hawaii, Obama's style was emblematic of the time period in which he lived, from his mini-afro to his printed collar. And when you're ready to add the finishing touch to your style, check out these 15 Best Men's Haircuts for Looking Instantly Younger.

2
As a college student

As an undergrad in the late '70s and early '80s, Obama mastered the art of laid-back style, from the loose-fitting button-up to the ribbon-banded fedora to that Bogart cigarette—the latter often a point of contention for his political foes.

3
As a law student

As a law student in the 1990s, Obama jumped on the preppy trend, hacking a few inches off his hair, grabbing a wide-collared leather jacket, and adding a wide scarf to complete the look. And for ways to firm up your own wardrobe, don't miss the 30 Timeless Style Upgrades. 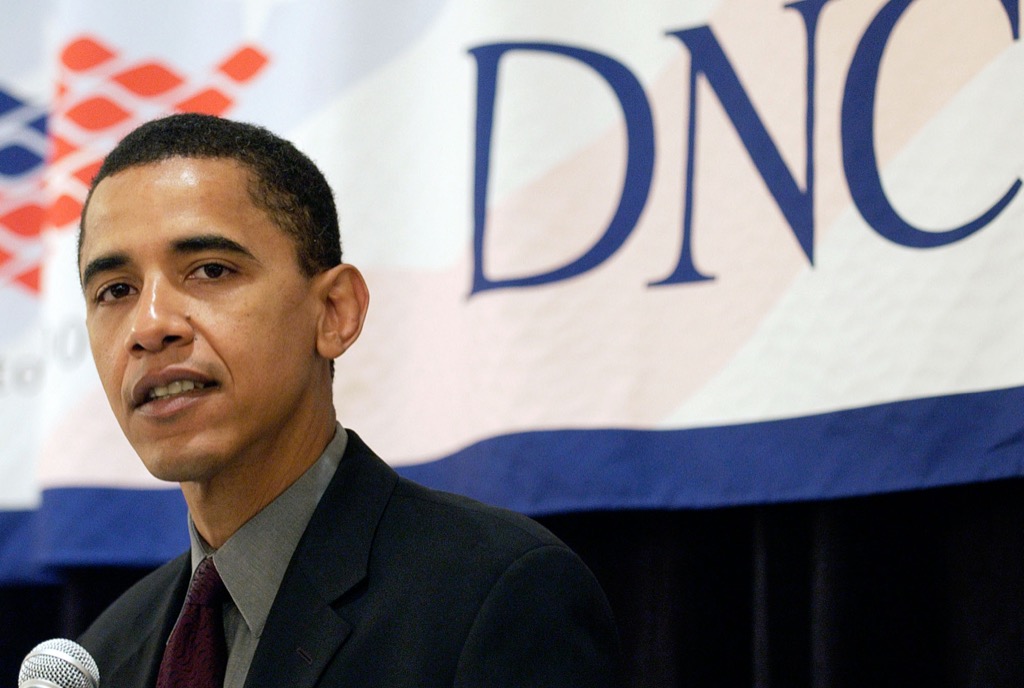 During his campaign for a U.S. senate seat, Obama further refined his look, opting for darker suits, more polished button-ups, and contrasting ties. It was at this point that he finally ditched any extra length of his hair, opting instead for a closely cropped style—which he's maintained since.

"It seems as he began climbing this ladder of success he closed the area around his neck by wearing a tie or turtleneck. A tie or turtleneck accentuates the throat area usually worn by people who speak for a living—great orators—or people who possess an amount of control over their audience using their instrument," says Dawnn-Karen. 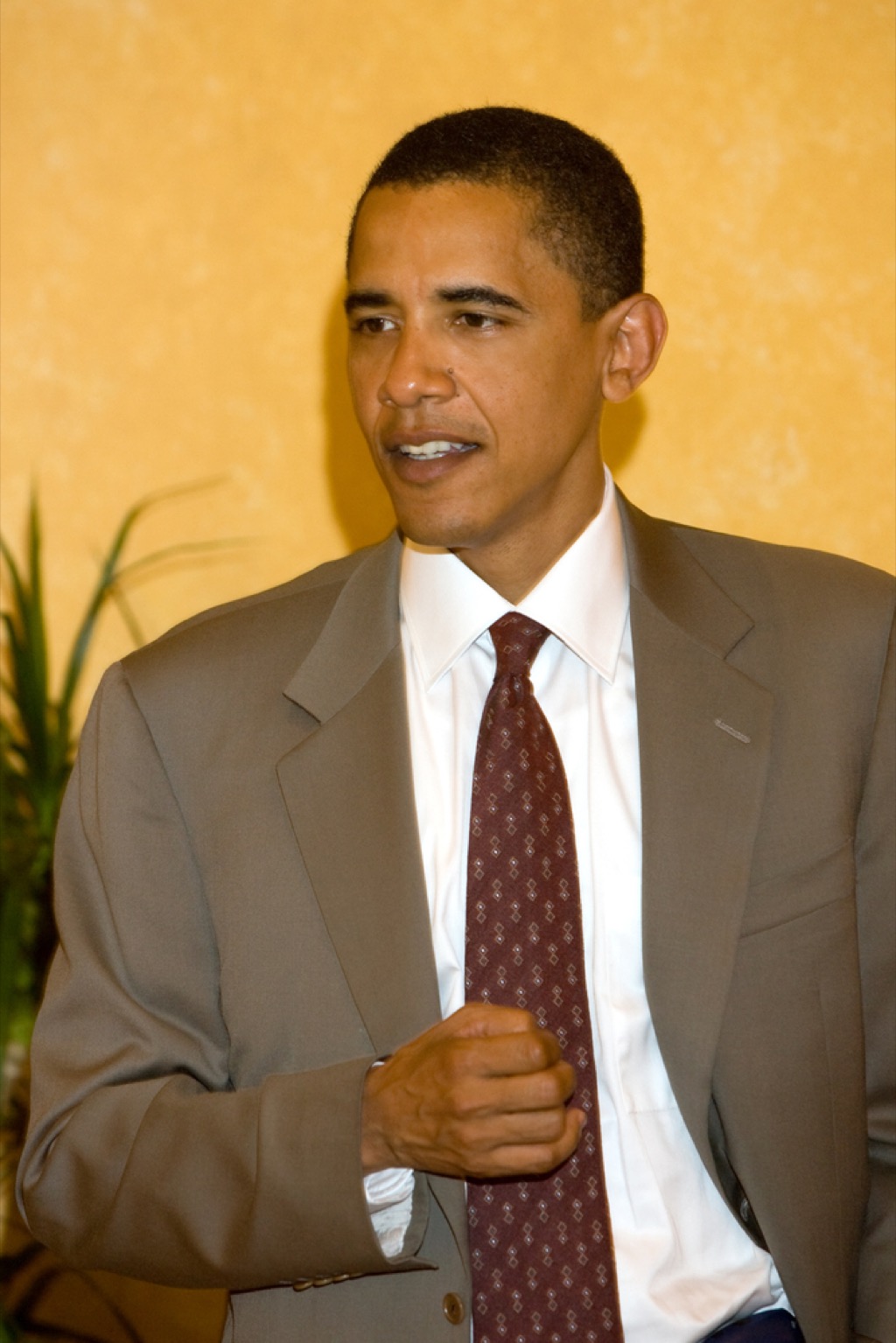 Of course, even fashionable men make some missteps. Obama's rumpled button-up, ill-fitting brown suit, and less-than-polished tie were a dated combo, at best.

While Obama had long been out of school by 2006, it seems that some of his preppier style choices hadn't faded entirely. Case in point: this short-sleeved polo shirt paired with rimless sunglasses, which, combined, achieved a particularly 2000s look.

Of course, not all of Obama's most influential style moments happened in the political arena. Despite his busy career, Obama always made plenty of time for one of his other passions: basketball. And, despite his normally buttoned-up look, Obama always went full dad on the court, with his less-than-fashionable sneakers, track pants, and t-shirts. 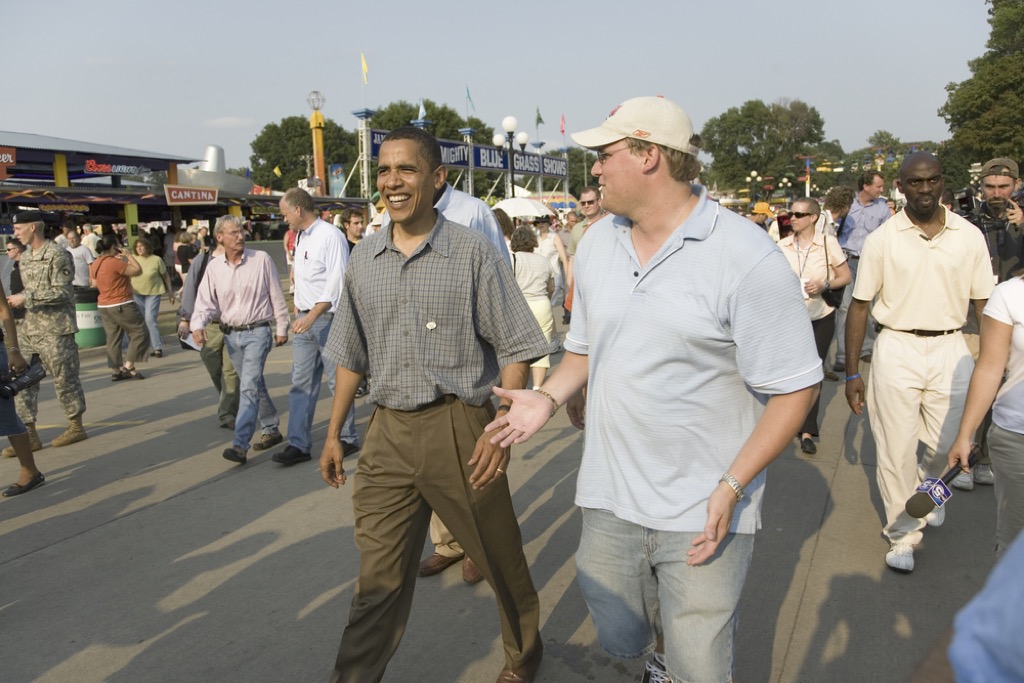 While Obama was regularly taken to task for his intellectual elitism, his outfit at the 2007 Iowa State Fair conveyed a down-to-earth style we've rarely seen from him since. In his baggy, short-sleeved shirt, brown shoes, and brown pants, Obama looked less like a president-to-be and more like any other fair attendee. 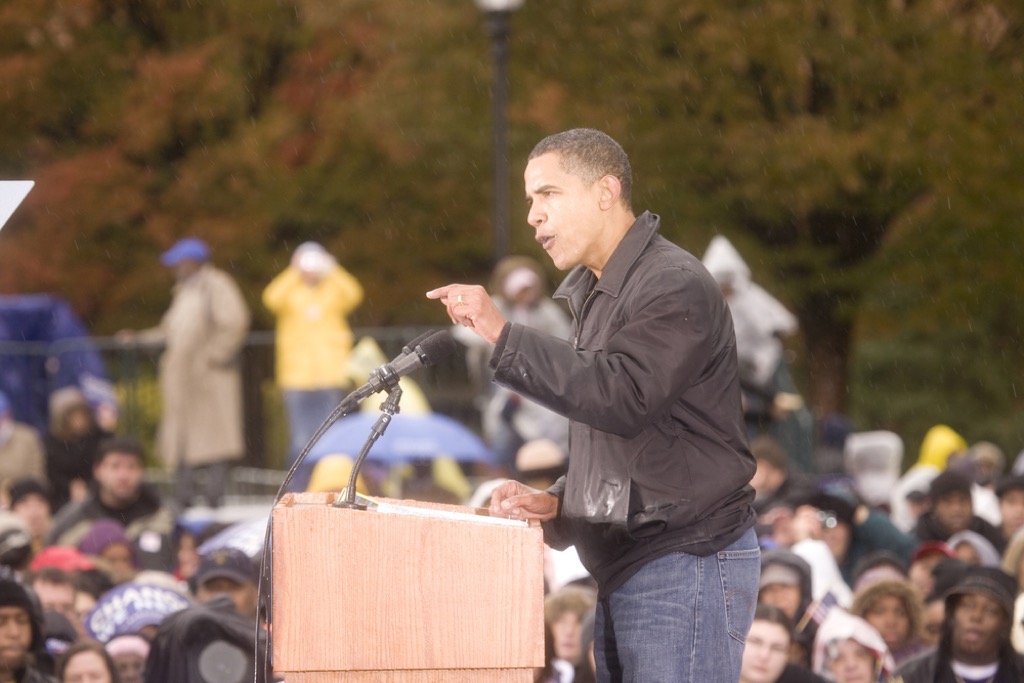 During his run for highest office in the land, Obama doubled down on his everyman look, sporting a windbreaker and "dad" jeans on the stump.

Even as president, Obama's style outside the White House harkened back to his younger days. In fact, while volunteering with wife Michelle and daughters Malia and Sasha early in his presidency, he wore practically the same outfit he'd been photographed in as a law student decades earlier.

By 2009, a year into his presidential term, Obama's style had fully evolved into the polished form we've come to expect from a world leader. Custom suits, subtly-patterned ties, and crisply ironed button-ups soon became Obama's signature look in office.

As you may recall, Obama opted for this tan suit during a summer press conference in 2014. While it seemed like a perfectly innocuous outfit to most people, it managed to be one of the most hotly-debated choices of his political career. In addition to detractors claiming the tan suit was proof of his socialism, Fox News' Greg Gutfeld described the look as "an impeachable offense." 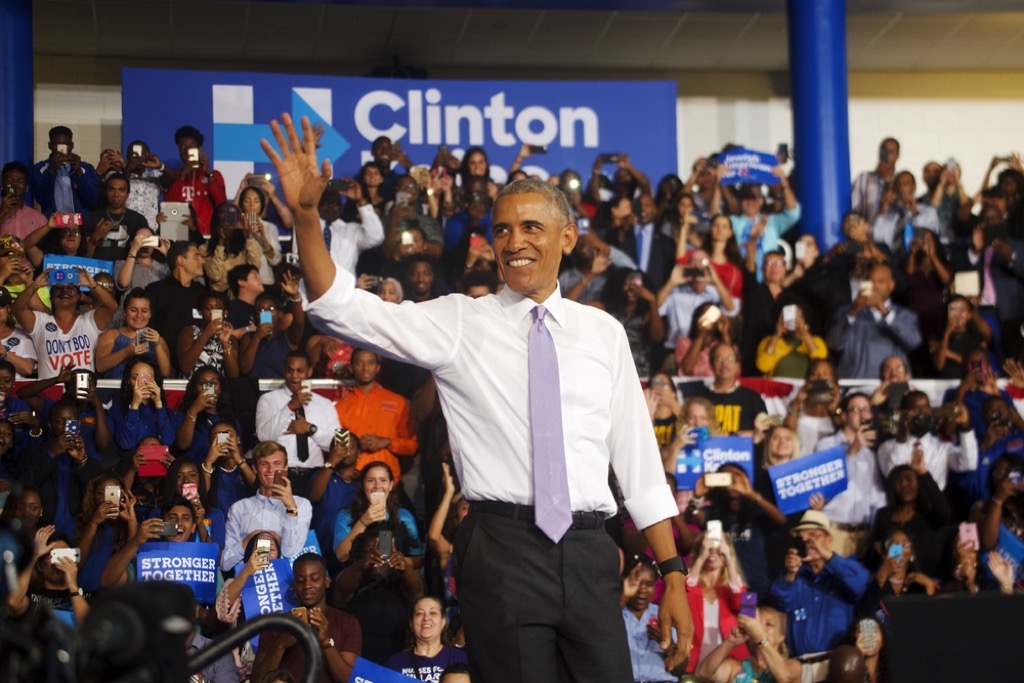 While campaigning for Hillary Clinton and Tim Kaine during the final months of his presidency, Obama opted for a slightly more casual style than he'd typically worn in the White House. The jacket was gone, the tie was lavender, but the look was every bit as polished as his followers had come to expect—and certainly a far cry from the oversized clothes he'd been wearing just eight years earlier.

By the end of his time in office, Obama was clearly eager to shed the full suits he'd worn for so much of his presidency in favor of more casual attire. Fortunately, this didn't mean a return to those unforgivable baggy jeans: instead, Obama looked well-dressed in slimmer trousers and a brown v-neck cardigan over a gray button-down. While it's not exactly like the man can live in anonymity from here on out, it's clear that Obama is feeling less constrained post-presidency, as evidenced by this outfit worn during an event in Milan in 2017. He's ditched the tie, left not one but two buttons undone, and let his cropped hair transform into something more natural.

No longer confined by his role as a politician, Obama has clearly been enjoying himself since leaving the White House, exemplified by this joyous photo captured by Virgin founder Richard Branson, who invited the Obamas to vacation on his private island in the British Virgin Islands in 2017. With his sunglasses on and his guns on display, Obama looked more relaxed than he had in years.

Finally off the clock for a while, Obama has gone back to the dressed-down style he seems to prefer. However, he's clearly ditched the fashion faux pas from his past and has opted for more streamlined versions of the outfits he once wore, including better-fitting casual shirts and more stylish shades.

"[He] has returned to wearing shirts that open his neck area, indicated by the open buttoned shirt. He has no need to possess a sense of control over his audience—his audience will follow his words to the end of the earth," says Dawnn-Karen of his new look. And when you want to give your own look an upgrade, start with these 15 Killer Style Accessories You Never Knew You Needed.