No, it's not a dog-eat-dog world out there.

Waste not, want not. Dress for the job you want, not the job you have. The only thing to fear is fear itself. Some wisdom is just timeless and will always be excellent advice—it's the kind of insight that never gets old from one generation to the next, even as the world moves from horse-drawn carriages to smart cars, telegraphs to iPhones.

But there are plenty of other tips, nuggets of advice, and life lessons from the past—even the recent past—that are a bit more questionable. Here are 30 pieces of insight that you can probably leave in the 20th century. So read on, and remember to ignore all of the advice that you encounter! And for more advice on how to actually age well, check out these 100 Best Anti-Aging Secrets. 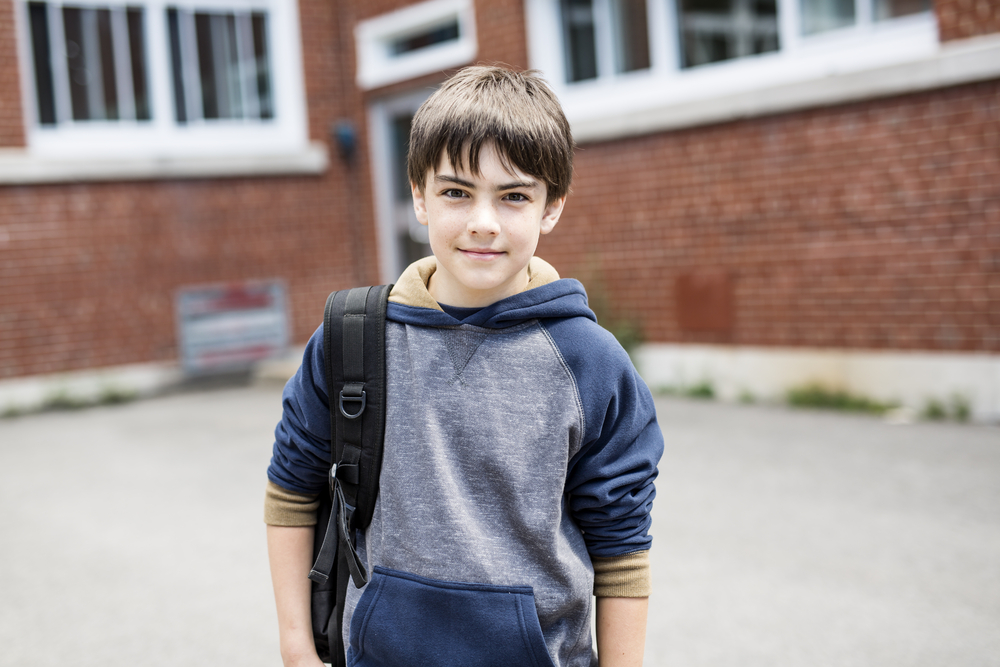 Plenty of dads and coaches passed on this insight to the boys in their charge, urging them to toughen up and push through something that was bothering them. Setting aside the sexist connotations of this statement today, it's become clear that ignoring worries or concerns can just create greater anxiety and even do long-term damage. And if you want to be a better dad of boys, read up on the 20 Easy Ways to Be a (Much) Better Father.

2
Don't Speak Until Spoken To 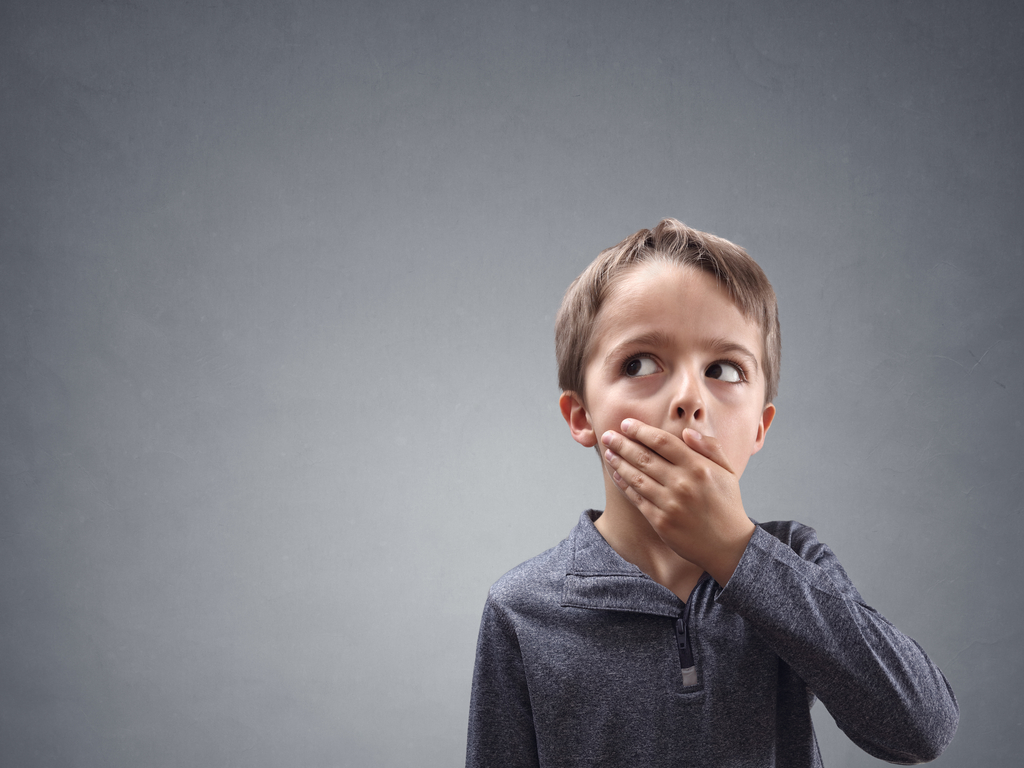 Any kids growing up early in the last century probably heard this bit of advice. While kids used to be the last thing anyone wanted to hear from, in this era—where it's become the norm to urge kids to explore every possible interest and express themselves as they like—such aphorisms don't come up too much anymore. And for more on raising kids, read up on these 40 Parenting Hacks for Raising an Amazing Kid.

3
Early to Bed, Early to Rise 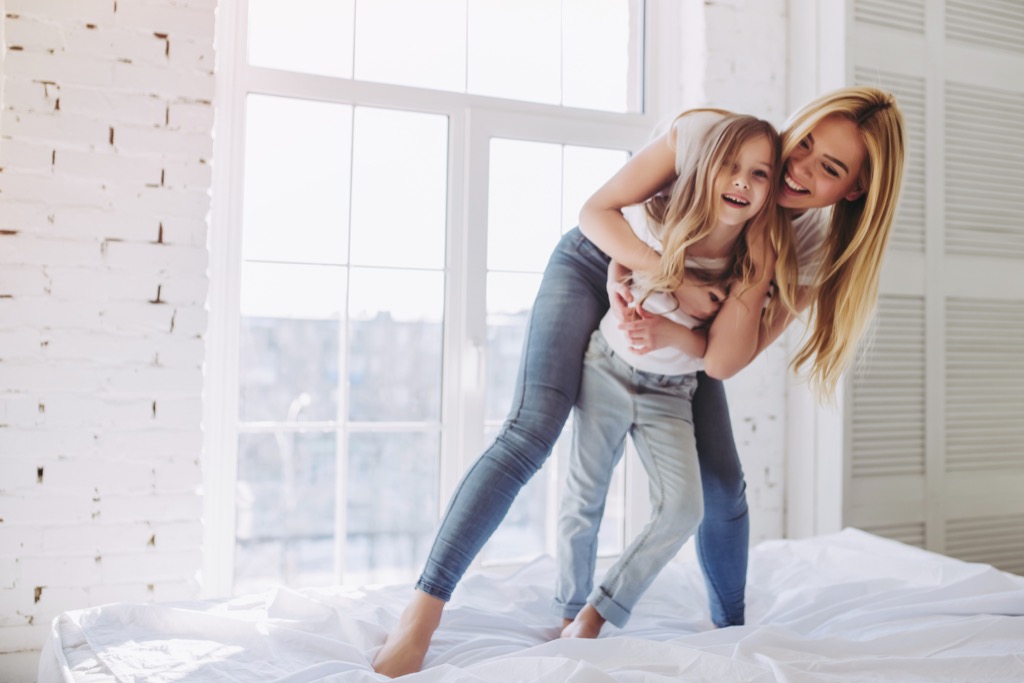 Ben Franklin's classic advice for how to become "healthy, wealthy, and wise" has become a bit outdated in this era of remote working, flex schedules, and "being your own boss." After all, in 2018, success is less likely to be seen as the result of the schedule you keep than what you actually produce. And for more advice on sleeping well, read up on these 40 Ways to Sleep Better in Your 40s.

Sort of like "be a man," this piece of advice saw feelings as something to be overcome or shoved down so that the necessary work could be done. While sometimes a little stoicism can be helpful, the dangers of ignoring one's actual feelings have only become more apparent in recent years. And for some amazing life advice, here are the 20 Genius Ways to Be Less Lazy.

5
Don't Eat Before You Swim

For decades, pool parties usually included the warning that anyone eating hot dogs and pizza should wait 30 minutes before swimming, whether because it could cause cramps or limit the amount of blood flowing to the swimmer's limbs. The science behind this has proven dubious, at best, and while overeating is probably not a great idea before diving into the water, there's little need to wait 30 minutes before taking a dip.

6
Don't Crack Your Knuckles or You'll Get Arthritis 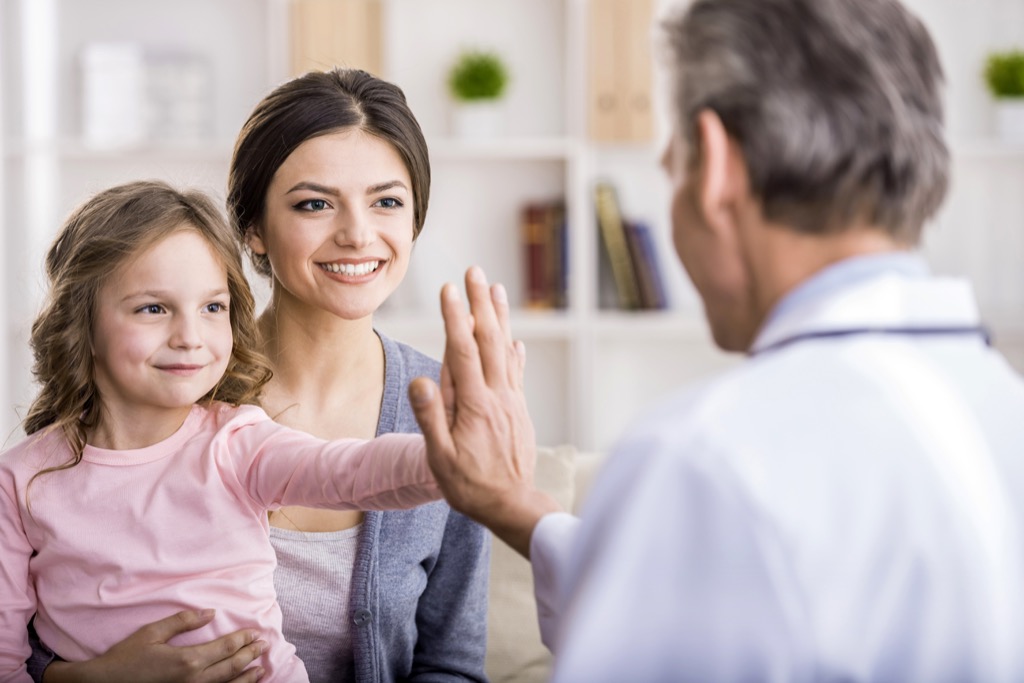 The person saying this might just have wanted the knuckle cracker to to stop the obnoxious habit and knew full well this was not true. But this advice, that persisted throughout the last century, is not true. Though cracking knuckles is caused by releasing gas from synovial fluid, there is no evidence that this contributes to arthritis (though some studies have found that it can reduce grip strength). Yes: It's definitely one of the 40 Health Myths You Hear Every Day.

7
Drinking Coffee Will Stunt Your Growth 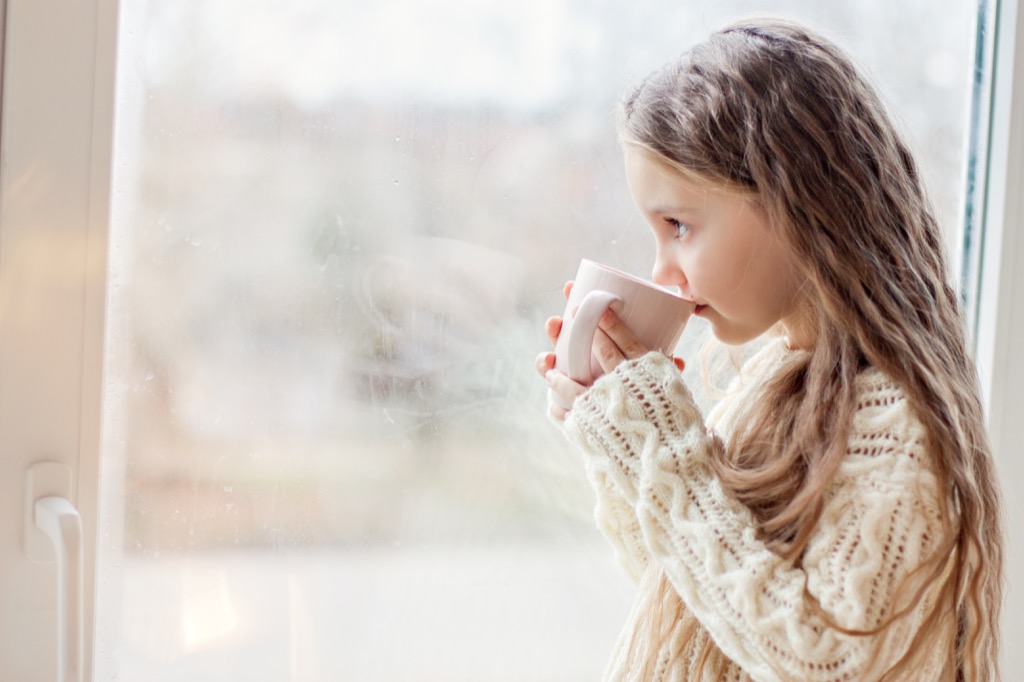 Many kids were kept from drinking their parents' coffee with this piece of insight. In fact, coffee drinking has been found to have no actual impact on one's development. However, way too much coffee is something else altogether. See here to read about How Much Caffeine You Need to Drink to Overdose. 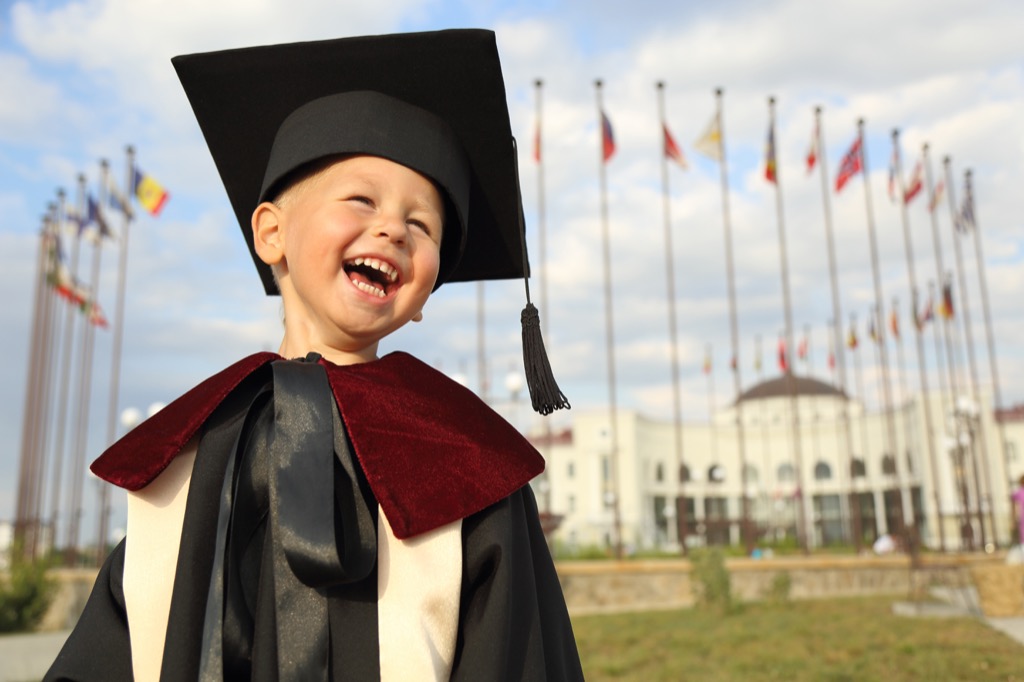 When someone considered what job they would pursue or what to study in college, this piece of insight would often come up, and there is a logic to it if the main concern is just getting a job and sticking with it your whole life. But in the 21st century, the idea of a "safe path" has almost vanished altogether. Instead, college aspirants today are more likely to be told to be bold and stray from the well-trodden path. In fact, in today's day and age, the new job appears to be multiple jobs: For proof, check out the 20 Most Lucrative Side Hustles. 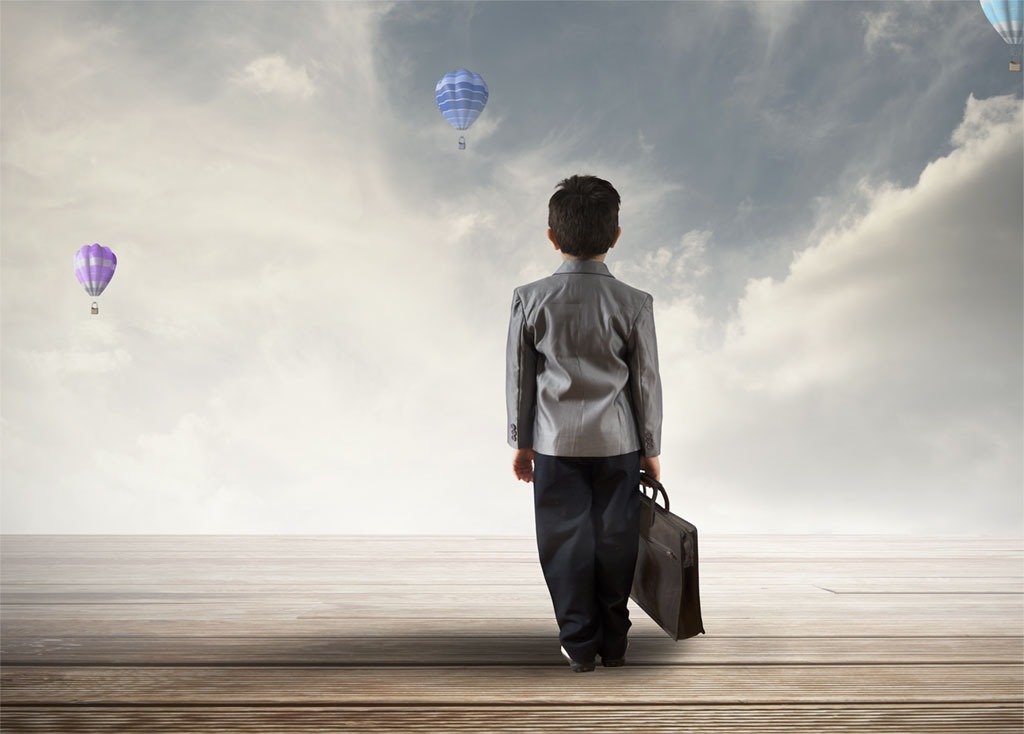 Sure, things get competitive and the world of business can get cutthroat, but the idea of zero-sum, kill-or-be-killed aphorism is a bit old-fashioned. Getting ahead in the 21st century isn't about knocking out the other guy, it's about improving yourself and what you are offering.

While looking into the sun can do serious damage to your eyes and eyesight, actually using them, even in dim lights, have not been found to have any significantly negative effect on your ability to see. It might not be all that easy to read what's on the page, but it's not going to cause you long-term sight problems.

11
Look Out for Number One

Watch out for yourself first, the idea goes, then worry about others. This is true to a point, but while this Me Generation mantra was of use during a period of rampant self-interest, it's proven less effective in more recent years.

Now organizations are all about corporate social responsibility, business leaders are getting more from workers by making sure they are happy, and successful people in general are speaking up about the power of cooperation.

12
Good Things Come to Those Who Wait 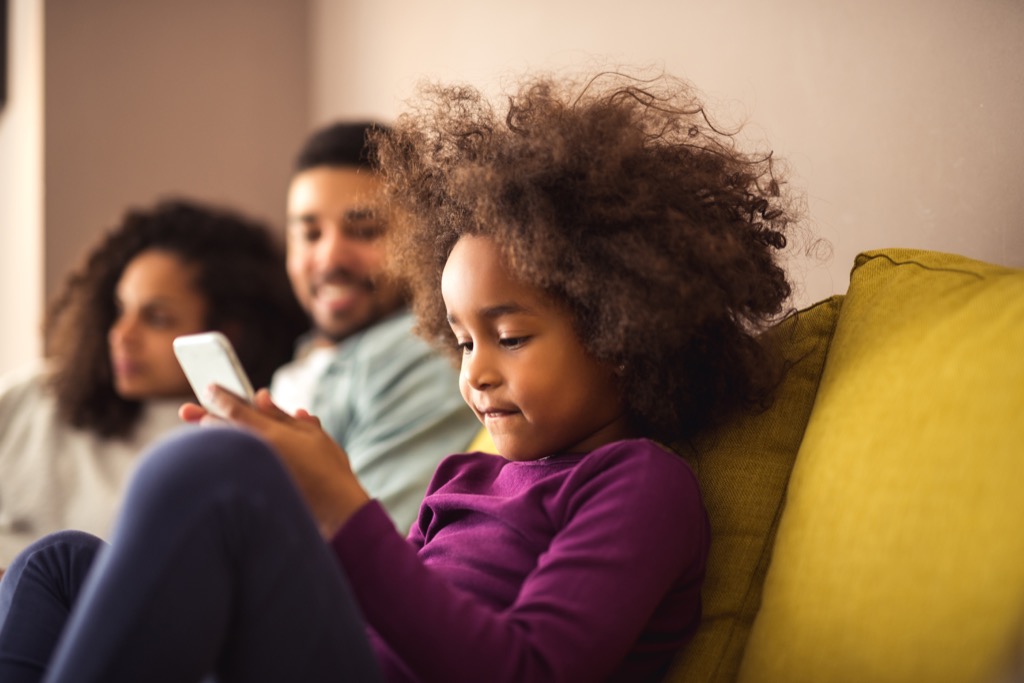 Maybe that lesson worked when life moved at a slower, more deliberate pace, but today, as things move at hyperspeed and fortunes are made or lost in a minute, waiting is not the best idea. Patience has its value, but these days, opportunities will fly by if you don't take action.

13
Sitting Close to the TV is Bad for Your Eyesight

This may have been true several decades ago, when General Electric's new color televisions emitted levels of radiation that health officials deemed dangerously high. But these sets have long since been taken off the market, and researchers have found essentially zero incidents of televisions causing physical damage to TV watchers or their eyes, no matter how close they sit. And for more on kids, here are the 40 Lies Kids Say That Parents Always Fall For. 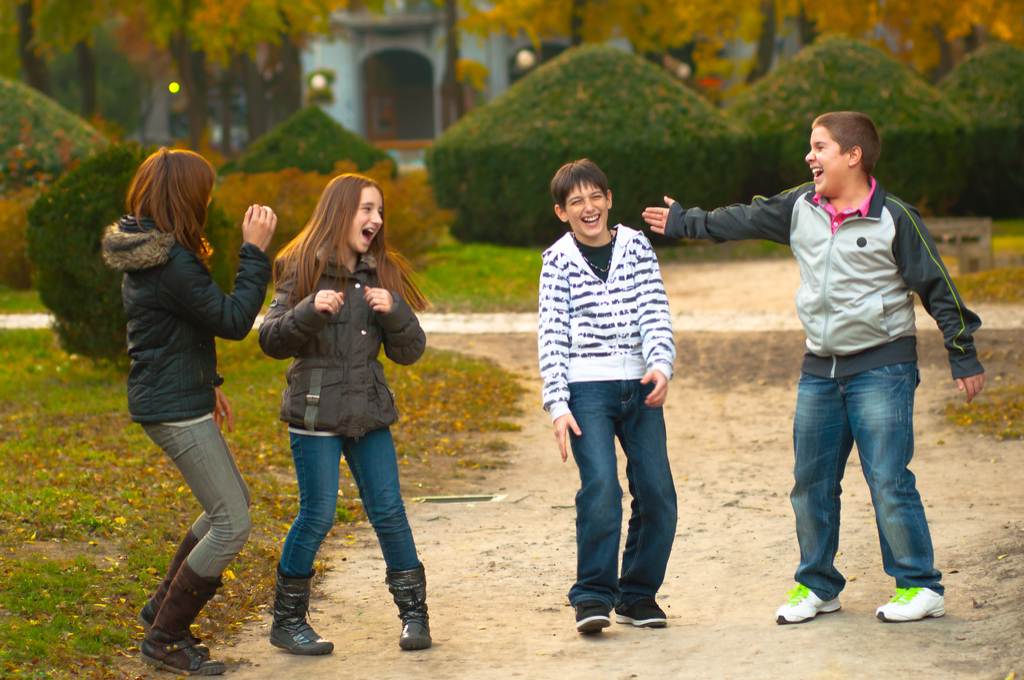 It used to seem vital to work nonstop and always have a few projects going—a life lesson we would learn from a young age and maintain through retirement. But as we've come to better understand the importance of downtime and having fun doing nothing (and how doing so can improve one's health and productivity over the long run), this kind of busy-for-busyness-sake outlook has fallen away.

Another bit of wisdom that spread like a virus at a time when people didn't really understand how viruses worked. When warts appeared on a person's skin, a popular explanation became that they may have handled a toad, which passed its bumpy skin on to the handler. In more recent years, we have seemed to have wised up.

16
Play to Your Strengths

Also see: Stay in your lane. Just as we used to stay in one job for decades, it also used to be expected that everyone would be a specialist in their particular area, sticking with one or two areas of expertise and leaving it at that.

But in an era where you can learn skills on YouTube or an app can teach you a foreign language in a couple months, the sense of possibilities has expanded and playing only "to our strengths" has come to seem outdated.

17
Breakfast Is the Most Important Meal of the Day

While there are studies that have connected eating a healthy breakfast with weight loss and lower risk of coronary heart disease, there has been little evidence found that the first meal of the day and greater health or productivity. As the New York Times concluded upon reviewing all findings, only one deduction about breakfast could be made: "If you're hungry, eat."

Anyone who went through high school in the last century probably heard this piece of advice. While keeping your chocolate intake to a moderate level remains good advice, the belief that it causes acne is nonsense. The real reason people suffer from acne is related to clogging of the skin's pores, buildup of bacteria, and excess oils on one's skin—none of which relates to the kinds of foods you eat.

19
Dry Your Hair Before You Go Outside

This is perfectly fine advice—unless the person telling you it is trying to convince you that it's a way to fend off a cold. While this was offered up as a piece of advice throughout much of the 20th century, it's not based on any supportive facts. Colds are caused by coming into contact with the virus, full stop. 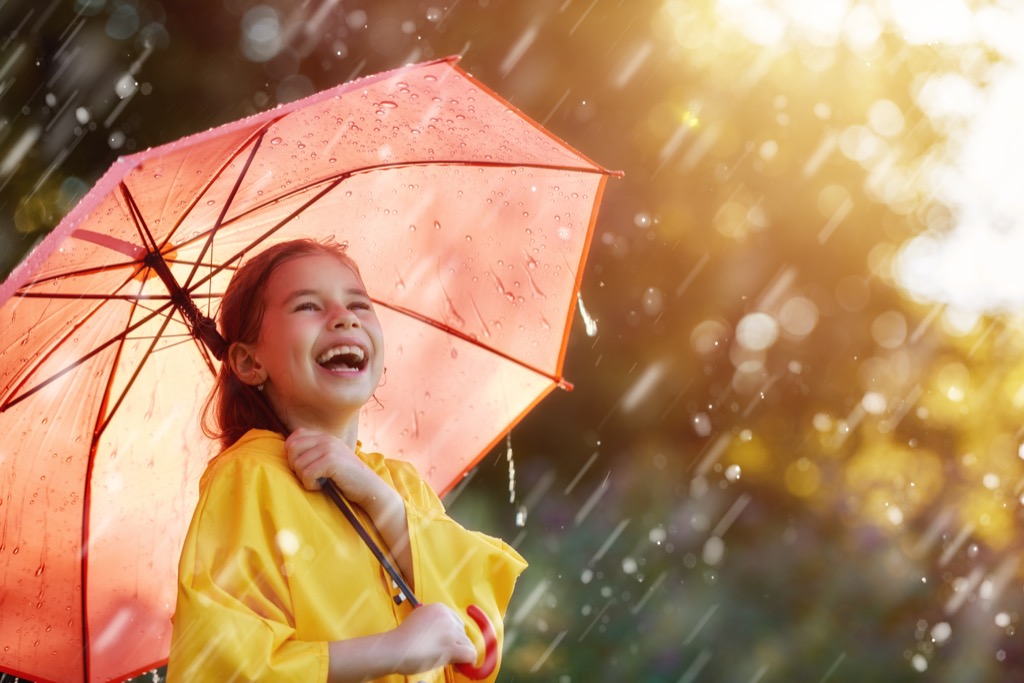 21
Feed a Fever, Starve a Cold

Speaking of colds, this was a common refrain for many decades of the 20th century—that cutting back on your intake of food helps you recover more quickly from illness, may have grown from a misunderstanding of your body's functioning: That eating fueled your body and boosted its temperature…so by cutting down on the fuel, you could keep the fever rising. And for more bogus teachings, here are the 20 Worst Food Myths That Still Persist.
ae0fcc31ae342fd3a1346ebb1f342fcb

22
You Can Catch Poison Ivy from Someone Who Has it

Plenty of kids during the 20th century may have been told to keep their distance from any schoolmates who picked up poison ivy. They needn't have worried—as has been clearly demonstrated, the only way to develop a rash is from directly coming into contact with the oil from the poison ivy plant (called urushiol). Touching a person who has contracted a rash (assuming they've since rinsed the affected area), isn't going to do much. 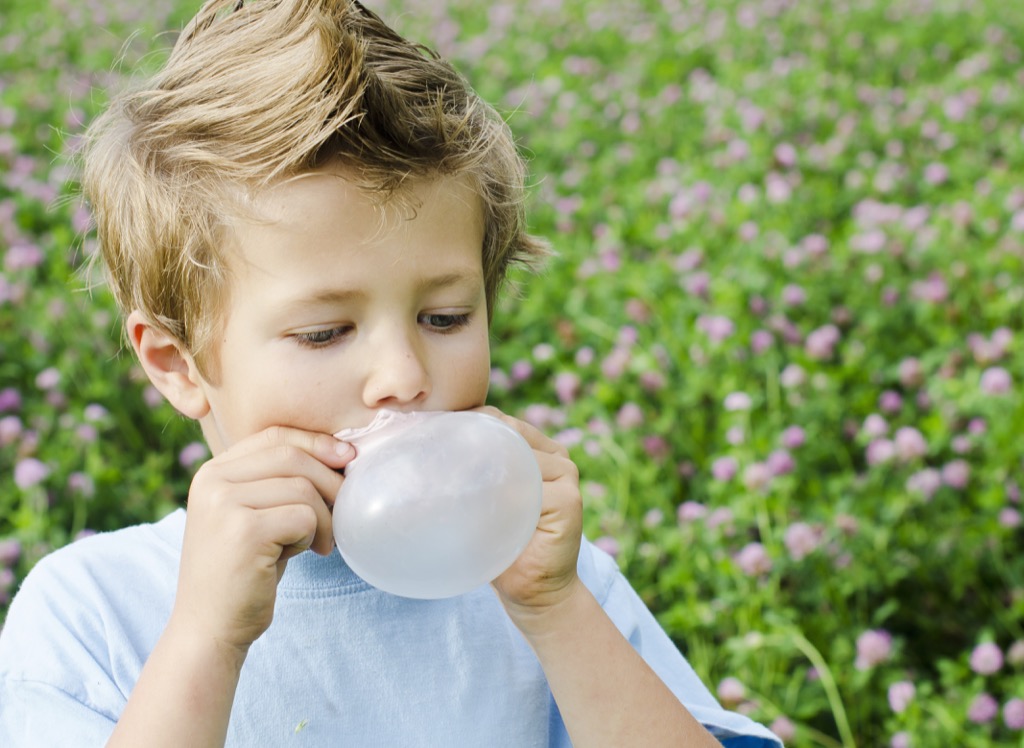 Some say seven years, some say a decade, but this bit of wisdom—perhaps created by parents worried about their kids choking on swallowed gum—has been thoroughly debunked. Gum is either digested or excreted, just like everything else you eat. Researchers who looked into it estimate that it would be unlikely to take more than a week to get through a person's body.

Wearing a hat is certainly a good idea when it's cold, but not because it's where most of your body heat escapes. Heat escapes from your head at about the same rate as it does from any other exposed part of your body. According to the New York Times, reporting on a study into this question, "If you did the same experiment with someone wearing a swimsuit, only about 10 percent of the heat loss would come from the head."

25
If You Shave Hair, it Grows Back Thicker 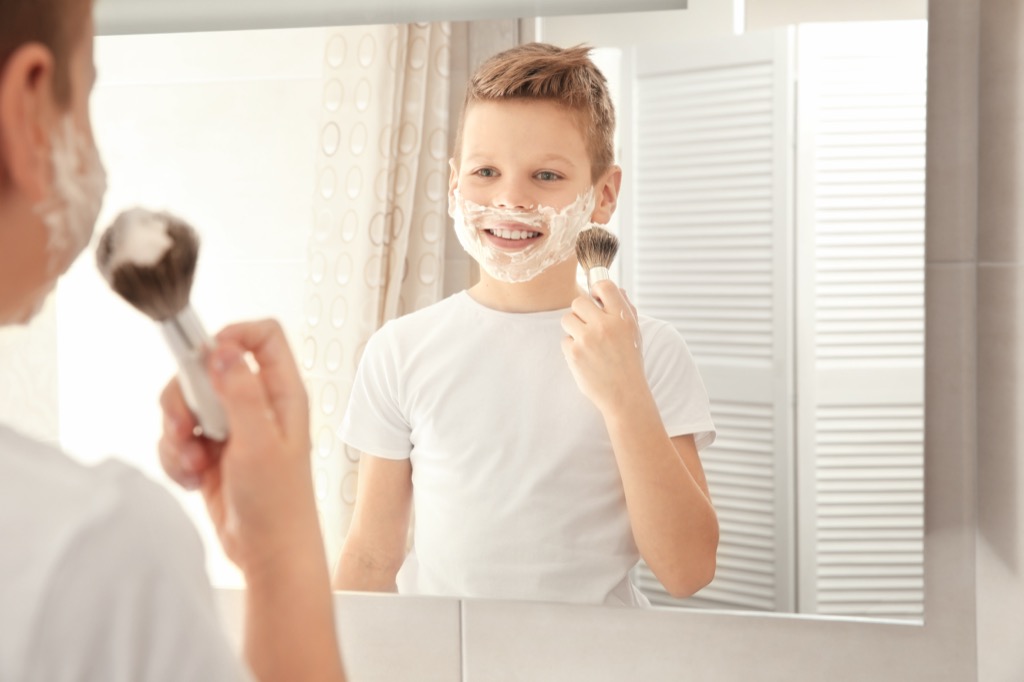 Anyone considering the removal of unwanted hair has likely come across this piece of wisdom. Instead of shaving off that hair, you should wax it, since shaving will cause the opposite effect: making it grow back thicker and stronger.

A study published in the Jounral of Investigative Dermatology found this to be nonsense, determining "no significant differences in total weight of hair produced in a measured area, or rate of growth of individual hairs which could be ascribed to shaving."