If You Live Here, Watch Out for This Common Plant That Causes Chemical Burns

Experts recommend getting rid of it right away if you notice it in your yard.

Growing up, your parents probably warned you about different plants to avoid when playing outside, like poison ivy or poison sumac. In those cases, the danger is in the name, but you may also have been unlucky enough to stumble upon other subtler but still unfriendly flora, and ended up with a painful rash or allergic reaction. As it turns out, there's one more common plant that you may not know can cause serious injuries in the form of chemical burns. Read on to find out which plant you'll want to avoid, especially if you live in certain U.S. states.

READ THIS NEXT: If You Have This Tree in Your Yard, Kill It and Cut It Down, Experts Warn.

Depending on where you live, different invasive species may be prevalent. 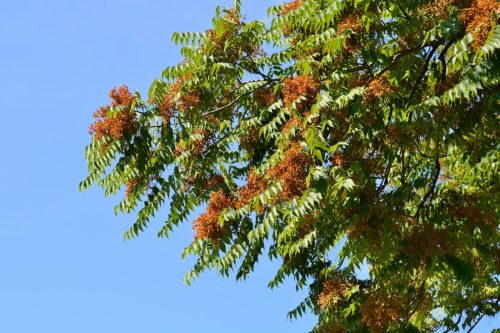 While poison ivy and sumac are native to the U.S., other hazardous plants are not, posing greater threats to surrounding nature, as well as your health. These plants, called "invasive," are able to spread quickly and aggressively, as they often don't have natural predators, according to the National Wildlife Federation (NWF).

Experts have previously issued warnings about the dangers of invasive species—including the Bradford pear tree, tree-of-heaven, and garlic mustard—which are now common in different regions across the country. Now, experts are warning about another plant that's particularly troublesome, and recommending that you take protective measures if you encounter it.

This plant looks pretty, but it's actually dangerous.

You may commonly add parsnips to your soups or stew, but be sure you don't confuse this beloved veggie with wild parsnip. Thankfully, the two plants look different, as the wild variety is a dangerous invasive.

"Like other invasive species, wild parsnip can rapidly colonize and take over an area, outcompeting native species," Charles van Rees, PhD, conservation scientist, naturalist, and founder of the Gulo in Nature blog, tells Best Life. "It can disrupt important ecological relationships with native species of insects and other wildlife that did not evolve adaptations to it."

According to van Rees, wild parsnip can look different depending on where it is in its two-year life span. In the first year, look for "long compound leaves" coming up from the ground, which then form a rosette. During year two, the plant will "bolt," or flower, van Rees explains, and can reach four to six feet in height. It will also have several stalks with yellow flowers.

"The flowers, packed in dense little groups, form a sort of umbrella shape, which is known as an umbel," van Rees says.

READ THIS NEXT: If You See This Flower in Your Yard, Call Local Officials Immediately.

This invasive plant has great survival skills, which allowed it to spread across Europe and Asia—where it is native—as well as throughout the U.S. According to van Rees, you can come across wild parsnip in 45 U.S. states, excluding Hawaii, Mississippi, Alabama, Georgia, and Florida. But one state, in particular, is the most afflicted.

"The densest infestations of this invasive seem to be in New York state, especially in the Hudson Valley," van Rees says. In fact, the New York Invasive Species (IS) Information website has an entire page outlining wild parsnip and the dangers it carries.

Whatever you do, don't touch this plant, experts warn.

If you're able to identify this umbrella-shaped plant, avoid touching it. Wild parsnip has a compound in its sap that can cause chemical burns on the skin when mixed with sunlight, the New York IS Information page states.

"In the case of wild parsnip, the condition is known as phytophotodermatitis, and includes extensive painful rashes and discoloration of the skin," van Rees explains. "Even after blisters have healed, skin can be sensitive to light and burn more easily for months afterward."

According to the New York IS Information page, this isn't as severe as coming in contact with giant hogweed, but van Rees explains that reactions can occur if you're mowing, picking, or cutting this plant without gloves or protective clothing.

If you are exposed to wild parsnip sap, the New York IS Information page recommends that you cover the affected skin to prevent reaction to sunlight, then wash with warm water and mild soap. If you've started to blister, you can use a damp cloth as a pain reliever, and call your doctor if your blistering is severe. According to the website, a cortisone steroid can help in this case, but unfortunately, there is no quick cure for these parsnip burns.

Get rid of wild parsnip if you see it around your home.

Obviously, you'll want to get rid of wild parsnip if it has managed to infiltrate your yard. Van Rees recommends cutting these plants below the soil line in order to kill them, but mowing can also be a good approach if you do it when the plant has started to flower and "is low on energy" in early summer.ae0fcc31ae342fd3a1346ebb1f342fcb

"If the plant has already gone to seed, prior to any other control, the homeowner should cut off the seedheads and put them in a plastic bag so that they don't spread," van Rees tells Best Life. "The species' biggest advantage is its huge number of tiny seeds that can spread rapidly, so containing that is a priority."

He also suggests reporting invasive species if you encounter them, which you can do easily using the EDDMaps app on your phone.