The 15 Ugliest Light Fixtures on the Planet

You don't need me to tell you that we're living in an artificially lit world. According to one survey, the average home has a whopping 47 different points of illumination in it, and chances are you hardly even notice them all. But when you do, let's face it: it's usually because its ridiculous and unusual appearance makes you stop in your tracks and say, possibly out loud, "My god that's ugly."

To make sure no one ever does that in your home, we've decided to round up all of the ghastliest lights, lamps, chandeliers, and other lighting fixtures that you can actually buy right now. So click on, and take pleasure in your superior taste. (Well, unless you actually have one of them in your home right now. If that's the case, toss it immediately!)

There's a design scheme out there to suit virtually any style, whether you love a classic Victorian home or are fans of a more modern aesthetic. What virtually everyone can agree on, however, is that a chandelier of purple-lidded eyes affixed to green tentacles doesn't go with any of them. 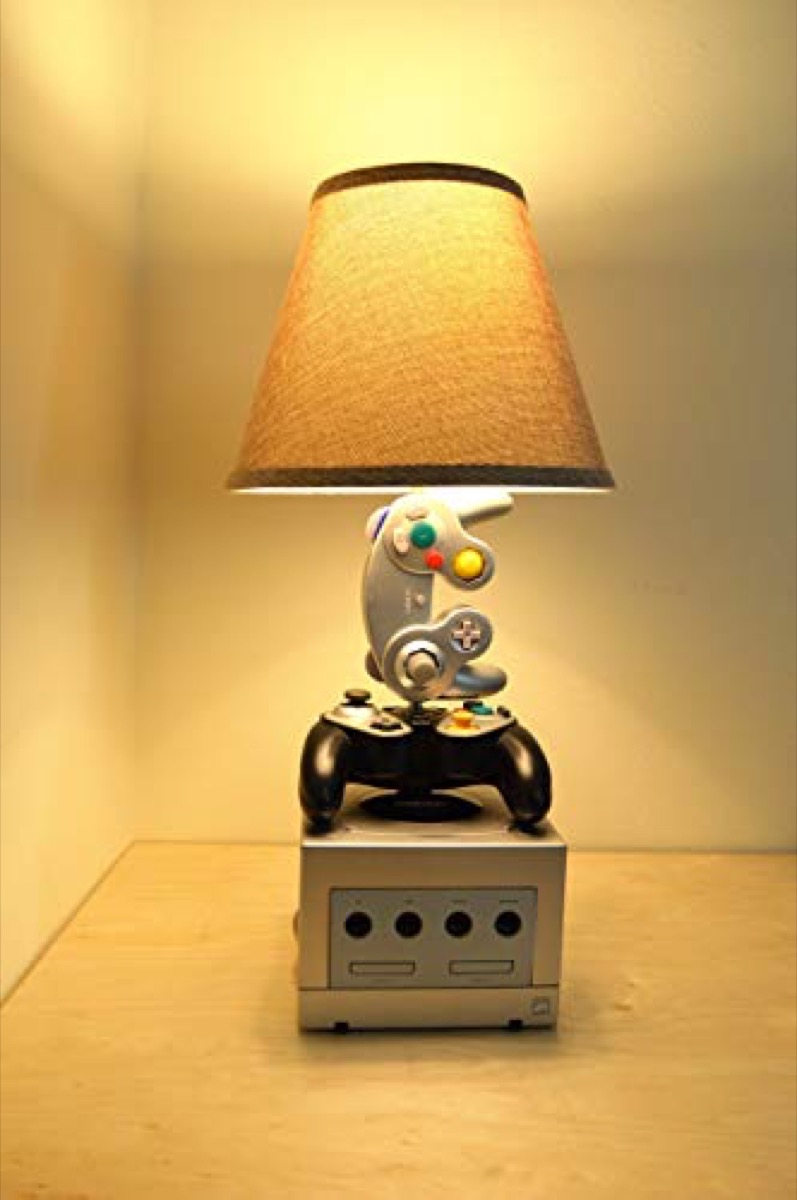 There's no denying that gaming culture has become more mainstream in the past decade. (Just look at the recent blockbuster launch of Red Dead Redemption 2, which earned $725 million in one weekend.) Unfortunately, this shift means there's also been an uptick in ugly lights, like this GameCube and controller stack that's suited more for a kid's room in 2002 than an adult's room in 2018.

Love Game of Thrones? Love drinking bourbon straight from the bottle? For those who answered "yes" to both questions, there's this particularly ugly light, featuring an over-imbibing dragon who's probably going to be in need of a cab ride home.

For some folks, Halloween isn't a single day of the year, it's a lifestyle. And for those so inclined to pursue the spookier side of things year-round, there's a light fixture that will keep your house looking horrifying year-round. Combining a bordello-inspired shade, fake spiders, a glittery pumpkin, ceramic skull, and, as the pièce de résistance, a taxidermy rat, this has to be one of the world's ugliest lights—especially if it's part of your year-round décor.

Some over-the-top chandeliers still manage to stay on the right side of elegant. This supposed bunch of grapes, however, does not number among that group. Not only is it a perplexing orange color, it also looks a lot more like bugs trapped in amber than your average bunch of grapes. To paraphrase Jurassic Park, "Light, uh, finds a way."

The great mysteries of the deep can now take center stage in your home, thanks to this perplexing lamp. A lantern-holding octopus, sitting on a tree stump, can now grace any of the surfaces in your home, shedding light on its own ugliness along the way.

While a classic Chanel Flap Bag-turned-lamp would be ugly enough as it is, the designer of this particular lamp took things one step further and created a purse no sensible person would be caught dead wearing, let alone using to light up their room. The combination of feathers, jewels, beads, embroidery, and a quirky little set of wire legs make this particular light source an undeniable fashion don't.

There's no denying that Americans love their beer. In fact, according to a recent Gallup poll, it's the most popular alcoholic drink in the United States. However, no matter how much you adore the IPAs and porters of this world, making your used bottles into ugly lights—or, worse yet, paying a pretty penny for someone else to do so—will never yield the stylish sophistication you're hoping for. If you were going for more of a frat-house-saloon vibe, however, you'll definitely nail it.

The bounty you reap from your own vegetable garden can be a beautiful thing. What's less beautiful, however, is sitting under a cabbage-heavy mélange of glass veggies, each slightly more lumpy and misshapen than the last.

Vegetation is a frequent theme among chandelier designers—for better or for worse. For a good example of one of the ugly lights that falls squarely into the "for worse" category, feast your eyes on this chandelier, adorned with wilted leaves and bulgy-eyed ceramic frogs looking as though they might leap onto your table at any moment. 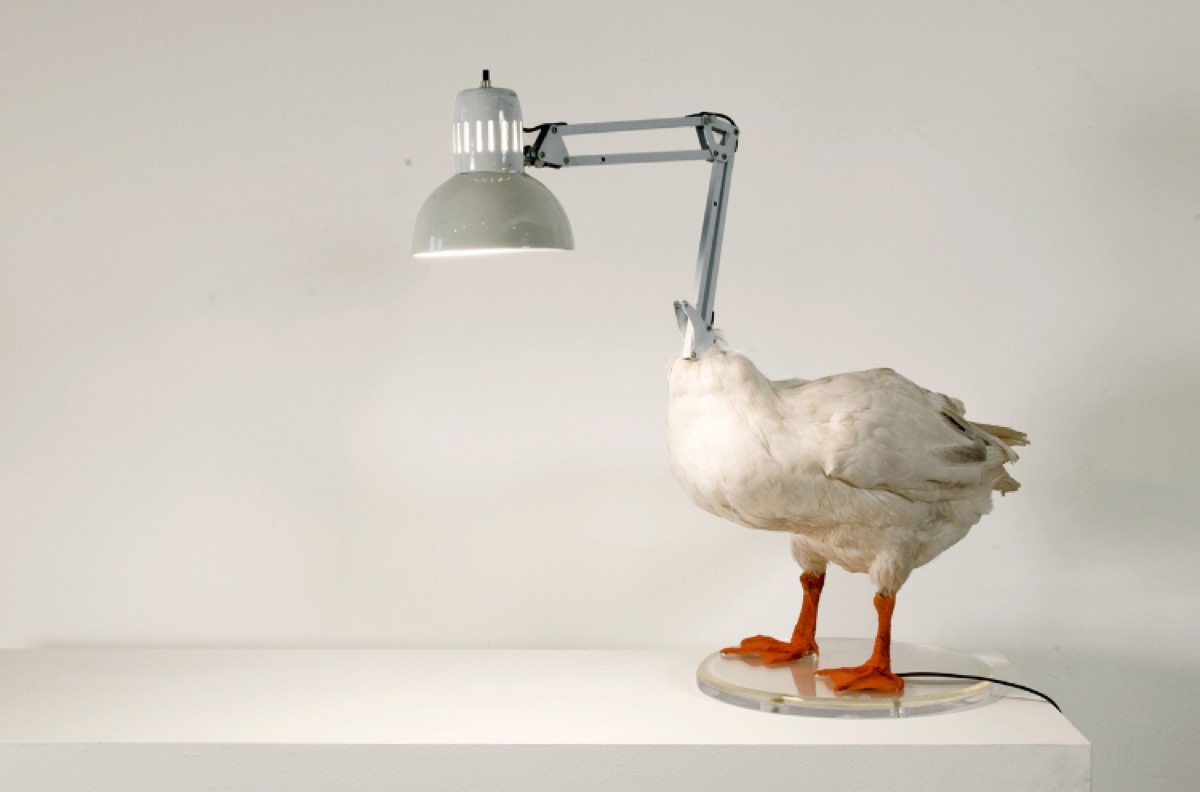 There's a time and place for taxidermy—namely hunting lodges and a time before people came to the general consensus that shooting animals for sport isn't exactly a kind endeavor. Unfortunately, the artist behind this horrifying light didn't seem to get the message before lobbing off the head of this poor bird and replacing it with a run-of-the-mill desk lamp.

Regardless of which side of the aisle you find yourself on when it comes to gun control, it's hard to argue for the beauty in this ammo-themed illumination device. Perhaps worse than its design, however, is the parade of ominous shadows it casts across your walls.

If you're looking for the right light source to instill terror in the members of your family, there's a zombie for that. Receding gums, flesh wounds, sunken eyes, and, conveniently, a little lantern, all combine to make this the undead king of ugly lights.

It takes a very special type of person to want this illuminated doll's head lamp to be a permanent fixture in their home. Specifically, someone who loves cigars, antique baby dolls, and being absolutely terrified every time they set foot into their home. And for more awful styles to avoid, discover The Worst Home Decorating Trend the Year You Were Born.

Sarah Crow
Sarah Crow is a senior editor at Eat This, Not That!, where she focuses on celebrity news and health coverage. Read more
Filed Under
Home
Read This Next
Latest News
Read This Next