25 Reasons Why Prince Harry is the Coolest Royal

He may never be king, but he'll always be the king of the people's hearts.

Prince George and Princess Charlotte are adorable. The Queen is respected all over the world. Prince William is England's future king and Duchess Catherine never puts a foot wrong (as the Brits like to say). But everyone knows Prince Harry is the coolest member of the royal family and, at this particular moment, the most popular.

Who can forget the grief-stricken 12 year-old boy walking behind his mother's coffin at the funeral of the late Princess Diana? Who didn't tear up when we saw that card nestled in an arrangement of white roses bearing the word "Mummy" is his spidery child's handwriting? We've watched him go through some very public rough patches, seemingly find himself when he joined the military and emerge a stronger man very much comfortable in his own skin. And now, he's finally no longer the third wheel younger brother in the royal family, but a compassionate, charismatic prince about to marry the woman he loves.

With that in mind, here are the 25 reason why we think Prince Harry is the coolest member of the British Royal Family. And if you're sad to hear that Harry's off the market, don't fret: Here are 10 Most Eligible Royals Right Now. 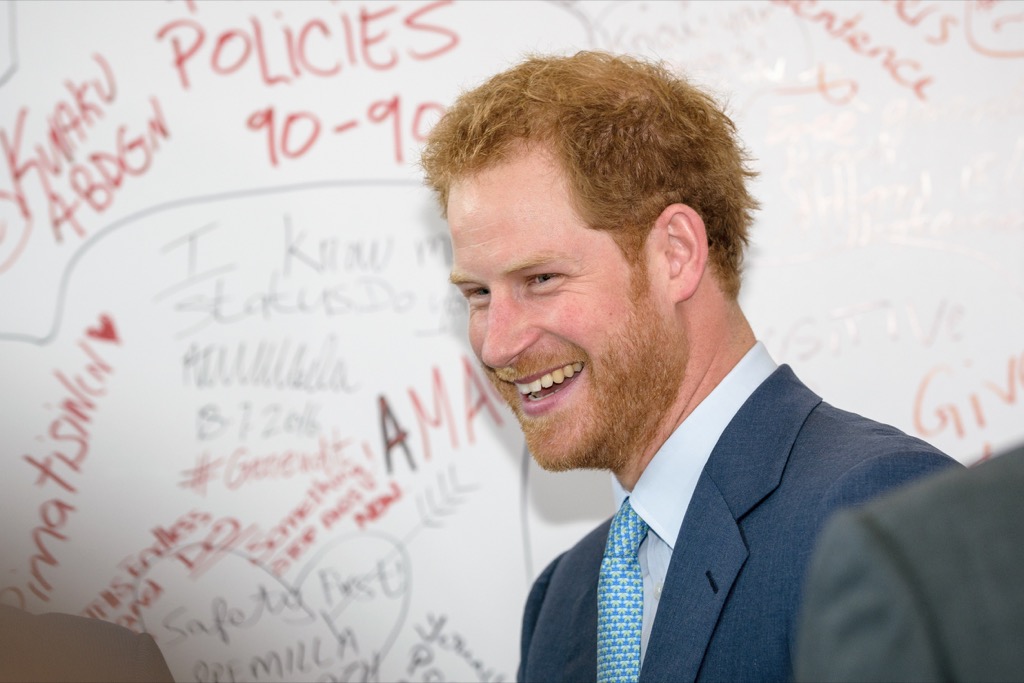 We knew he liked it here—he's held The Invictus Games in Florida, played polo in Greenwich, Connecticut, and spent plenty of time in Washington, D.C. But now that he's engaged to California girl Meghan Markle, he's fully declared his love for America, and the feeling is mutual. "All the stars were aligned," he said of falling in love with Meghan.

In their first joint interview after their engagement announcement, Harry explained he designed Meghan's engagement ring himself with a large diamond sourced from Botswana, a place that holds special meaning for the couple where they "camped out under the stars." So as to include his mother in this important event, he chose to surround the larger stone with two diamonds from Princess Diana's personal collection. "It's perfect," beamed Meghan. And to help you prep for their big day, read up on these 30 Fascinating Facts About British Royal Weddings.

3
He's going be a great husband

"I know that at the end of the day, she chooses me," said Harry of Meghan. "I choose her. Whatever we have to tackle will be us together as a team."

Harry has spoken out on sexual harassment. "This is not just about women. We men need to recognize the part we play, too," he said. "Real men treat women with the dignity and respect they deserve."

5
He's served in the military 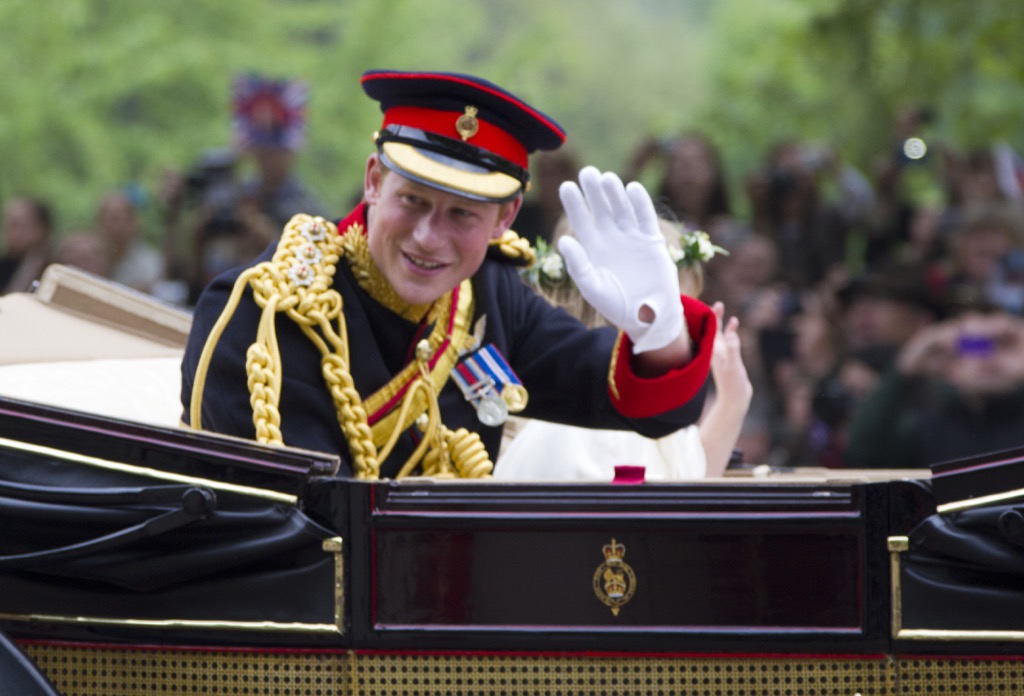 Harry did two tours of duty in Afghanistan. He has said of his decision, "There's no way I'm going to put myself through Sandhurst and then sit on my arse back home while my boys are out fighting for their country." 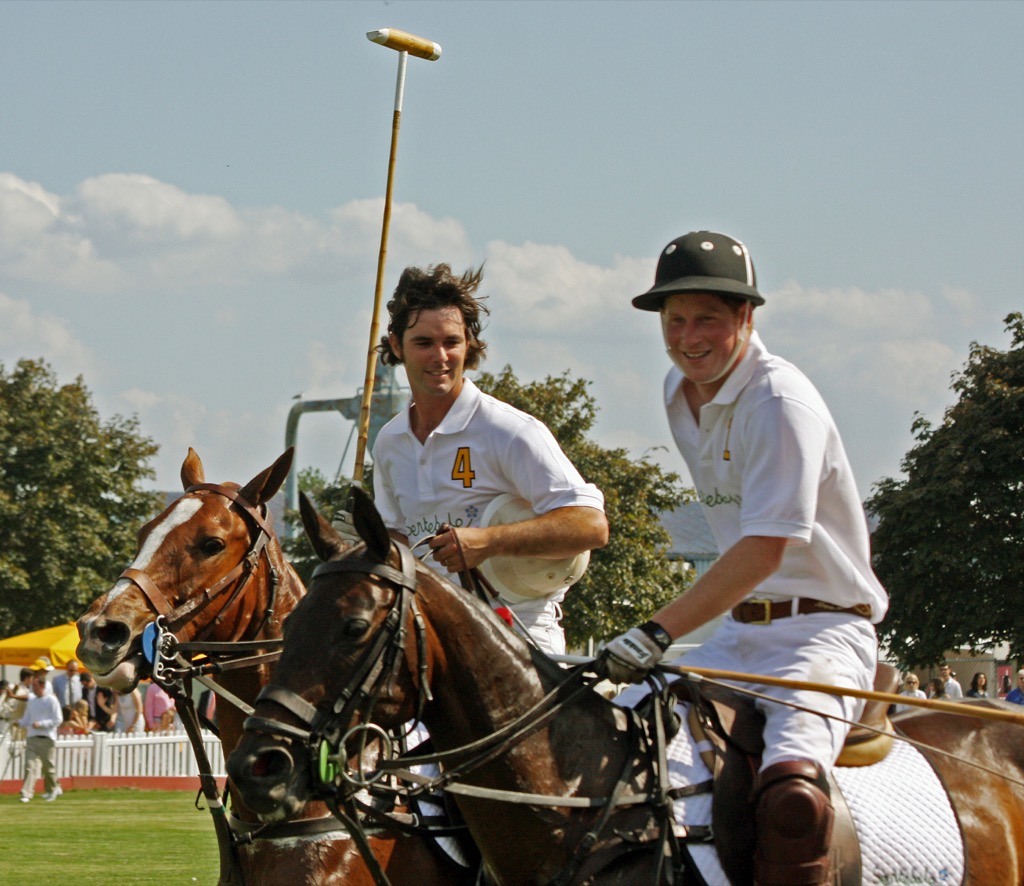 7
He wants to live a normal life 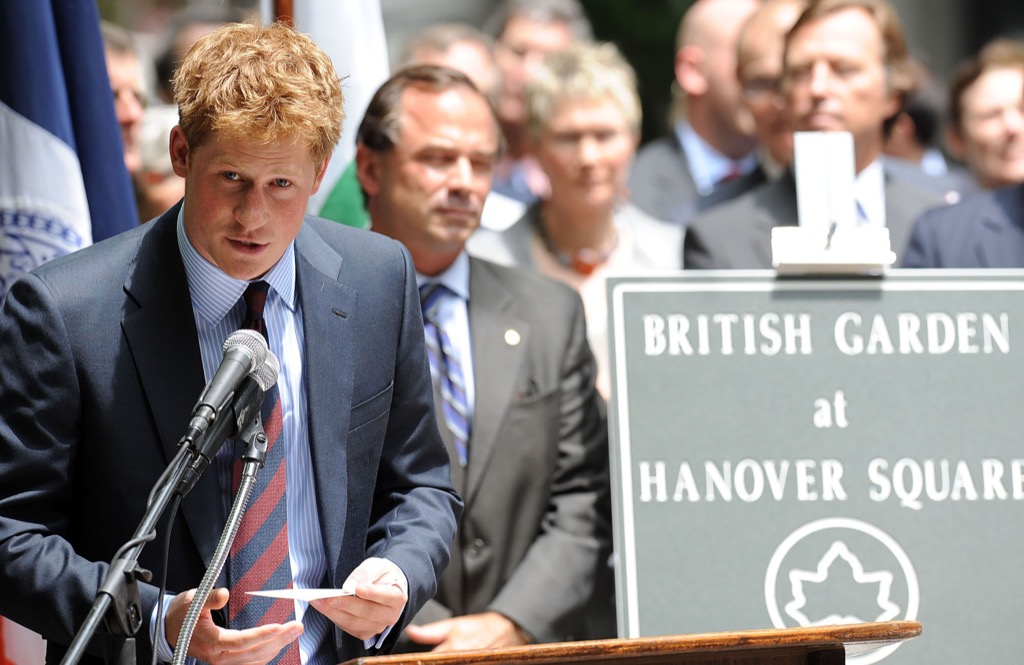 Well, as normal as he can be as a member of the royal family. "There's a lot of time that my brother and I just want to have a normal life," he's said.

8
He believes in using his celebrity for good 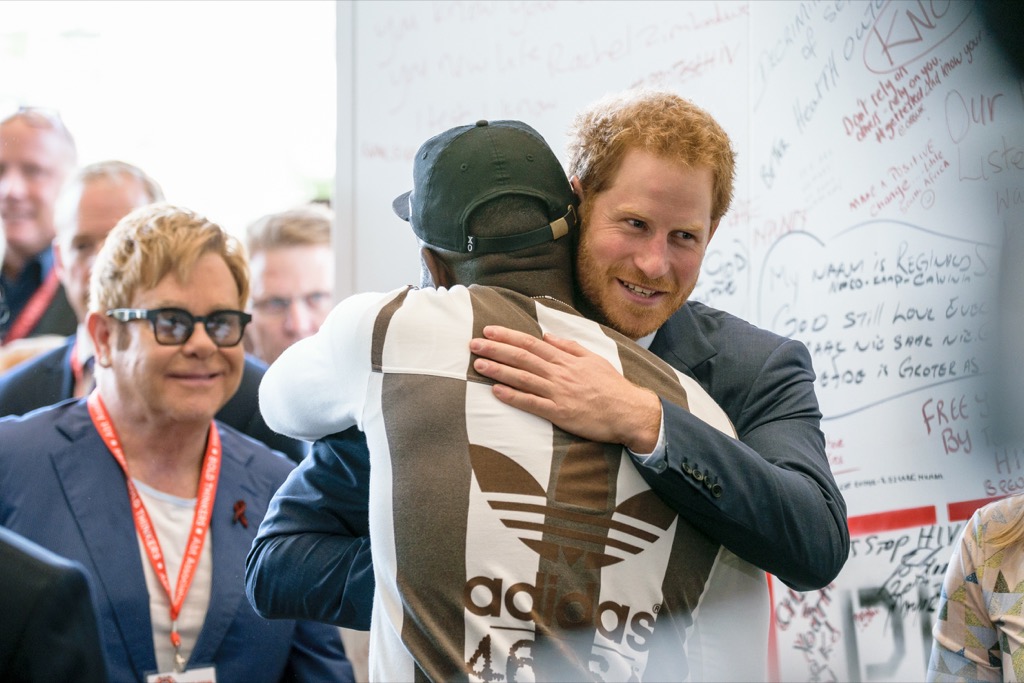 "You've got to give something back," he's been quoted as saying. "You can't just sit there."

"The world [needs to] know if I've lost a leg, two legs and arm, or if I've been suffering from depression or anxiety for many, many years, no matter who you are, you can fight back from that," said Harry when launching the Games. "And I think that is the key message for everybody to take away from Invictus… if you have a second chance in life, to make the absolute most of it."

"I get a huge buzz spending time with kids," he's said. And, yes, the toddler who stole Harry's popcorn is one of the 40 Things We Should All Be Thankful For in 2017.

"I've longed for kids since I was very, very young," he said shortly after Prince George was born. "I'm waiting to find the right person, someone who's willing to take on the job." And now that he has found someone, we can't wait to see their version of a Royal Family Christmas Card. 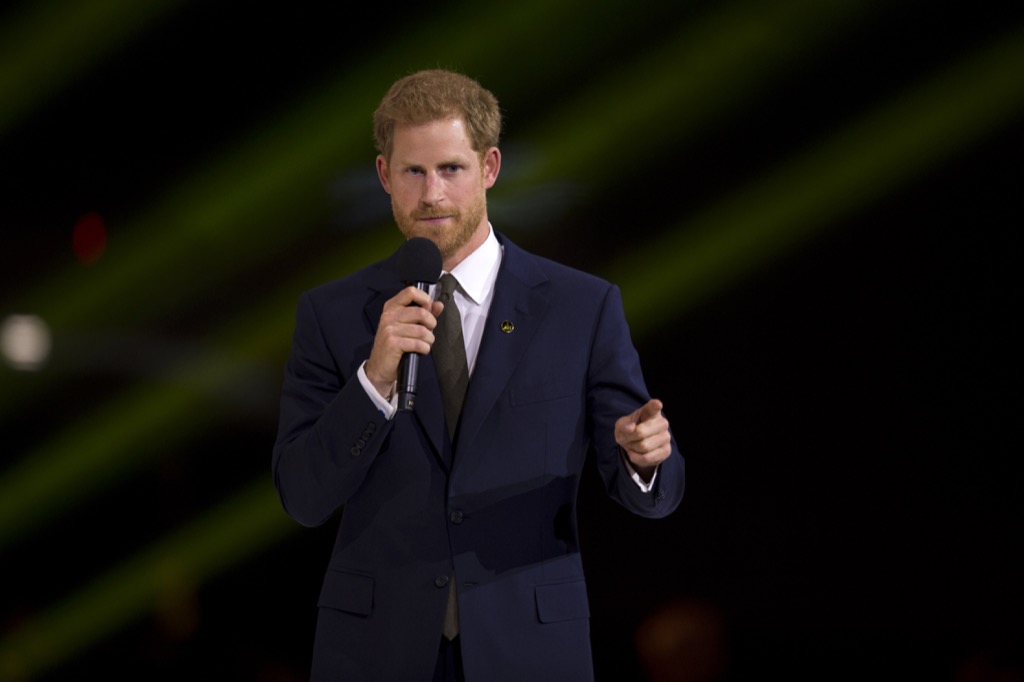 After finally speaking out about the difficulties he had after Princess Diana died, Prince Harry has reached out to other children who've also lost a parent. "I knew there would always be a gaping hole that could never be filled," he said last year. "There are children far younger than me, and of course, their situation was a great deal more challenging than my own. Nonetheless, we shared a similar feeling of loss, having a loved one—in my case a parent—snatched away so suddenly."

13
He's friends with the Obamas

Harry has been making surprise appearances with Barack Obama this year and recently admitted being "nervous" about interviewing the former president for BBC Radio 4. We will certainly be tuning in when their conversation airs on December 27.

14
He can laugh at himself 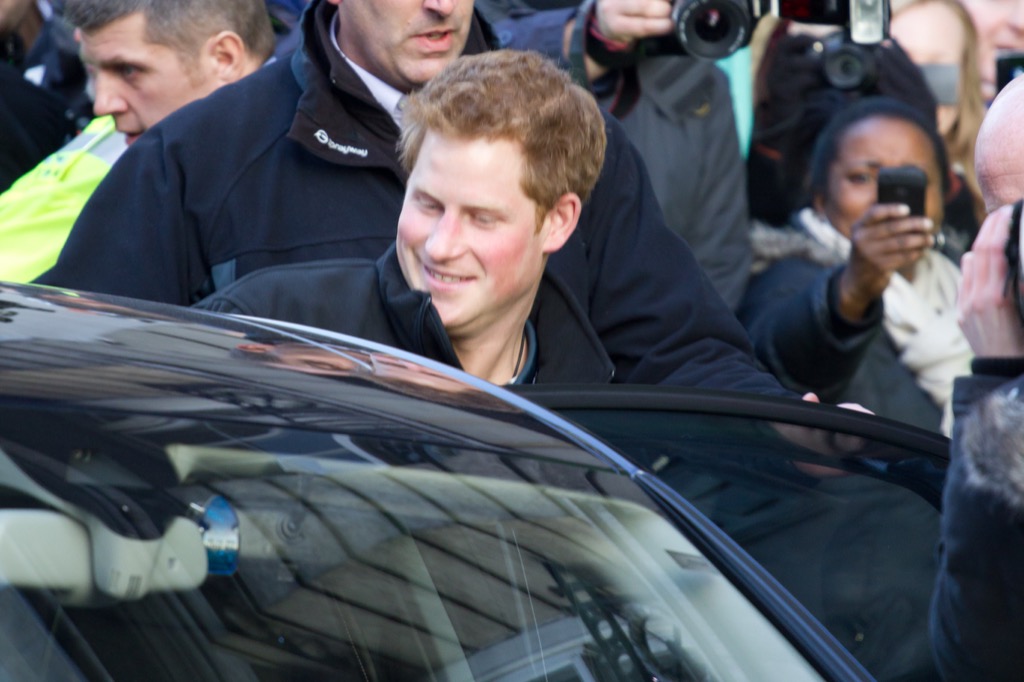 Harry has said that he was bullied as a teenager for having red hair. His army pals called him "Ginger Bullet Magnet." But he got the last laugh. During his first official appearance with Meghan after announcing their engagement, a well-wisher on the rope line asked him what is was like to land a woman like Meghan as a "ginger." Harry broke into a wide smile and answered, "It's great!"

Harry and William had cameos in the film in The Last Jedi as Stormtroopers.

16
He loves to tease his brother

When it was announced William and Catherine were expecting their second child, he told a reporter, "I can't wait to see my brother suffer more, and with any luck, if it's a girl, then he'll suffer even greater."ae0fcc31ae342fd3a1346ebb1f342fcb

17
One of his best friends is his sister-in-law 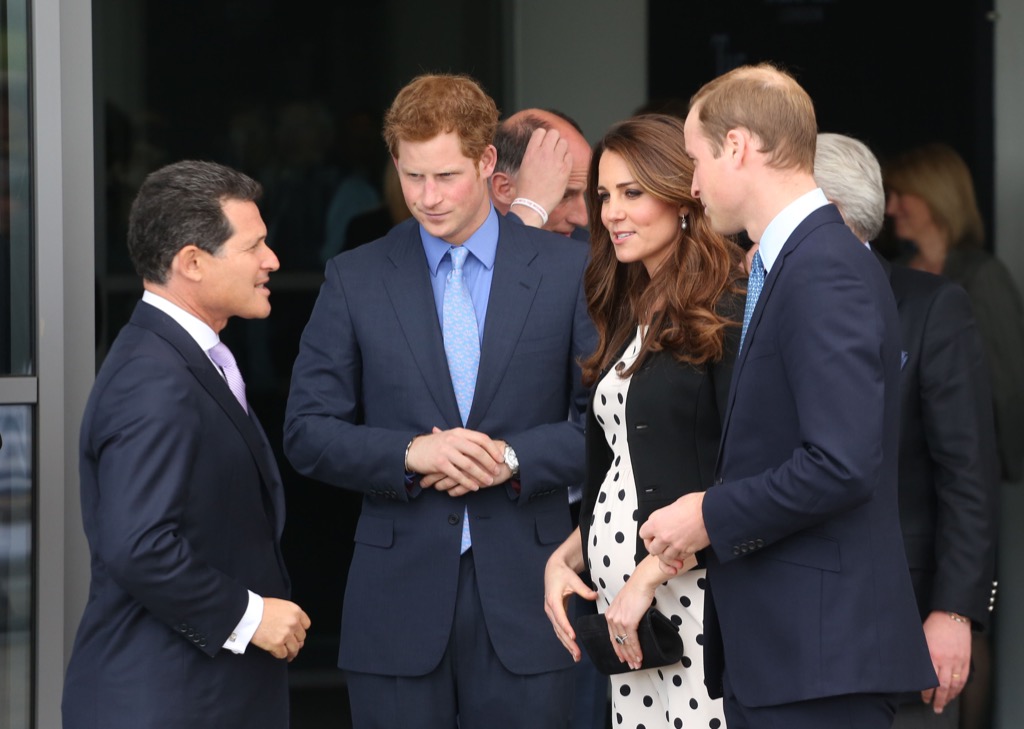 Harry considers Catherine "the sister I never had."

18
He is very close to his grandparents 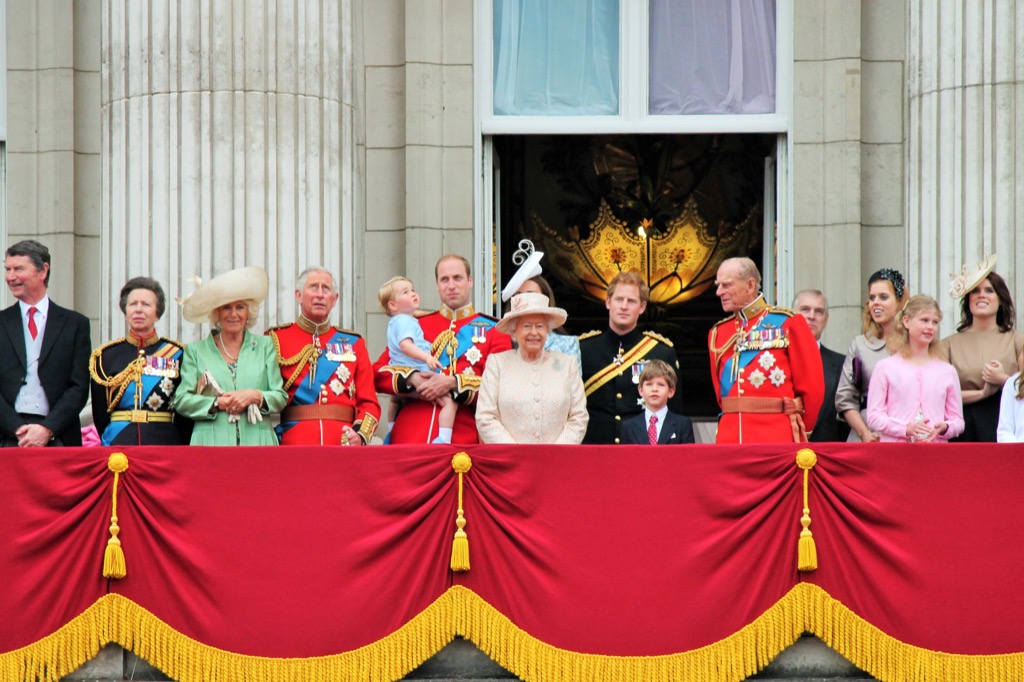 Harry has described the Queen as a "remarkable" woman and enjoys a special relationship with his grandfather, Prince Philip. When Diana died, he did not want to walk behind her coffin. His grandfather wanted to help him deal with the overwhelming task and asked him, "If I do it, will you?"

19
He got the Queen to make a rare joke

He got his grandmother the Queen to join him in that "mic drop" video—along with the Obamas—to help promote the 2016 Invictus Games.

20
He's the most athletic royal in the family 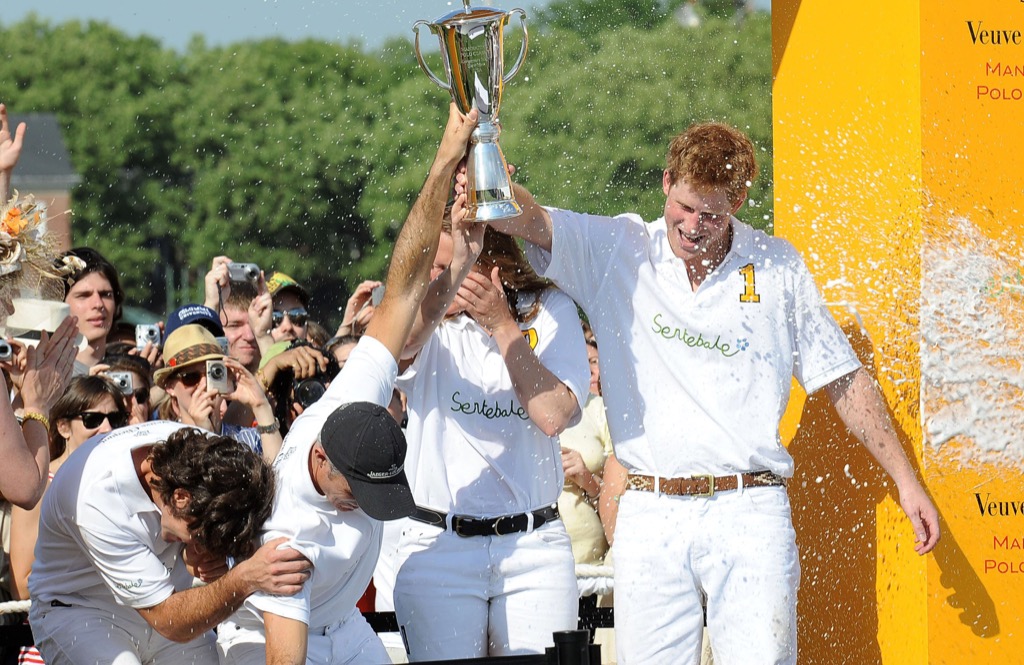 In the hyper-competitive royal family, that's saying a lot.

21
He's been honest about his struggles with depression 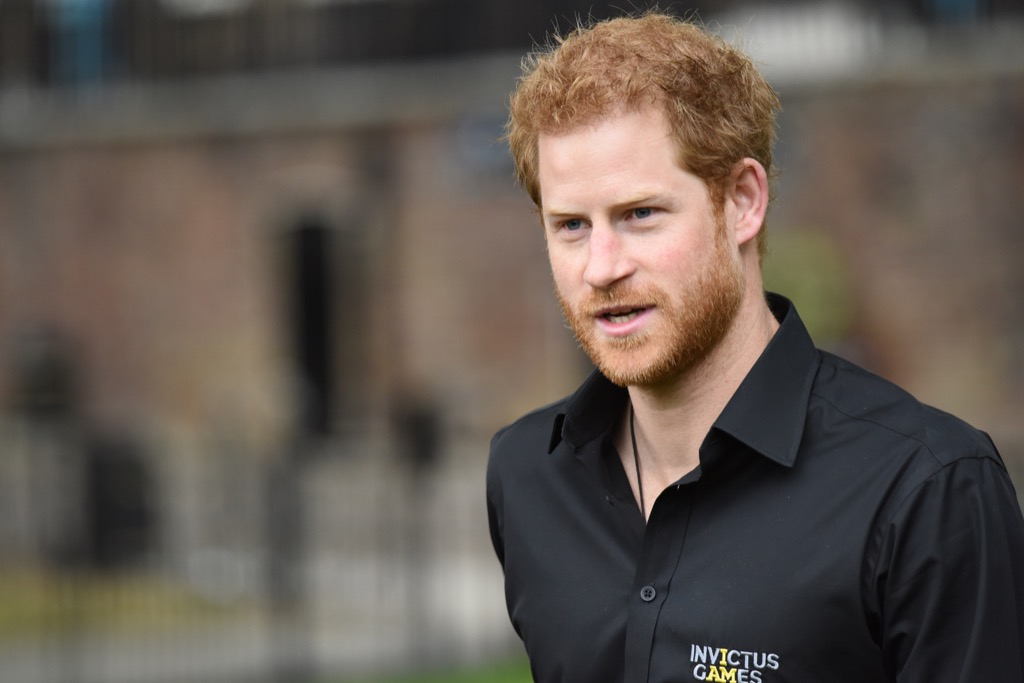 Harry has spoken openly about his need to undergo counseling in his late twenties to deal with bottled-up grief. His suppressed emotions led to a period that he has described as "total chaos" and "very close to a complete breakdown" when revealing photos of him in a Las Vegas hotel were published online. "You know, I lost my mum when I was 12, so emotions were locked away very, very early on," he said.

22
He is working to de-stigmatize mental illness 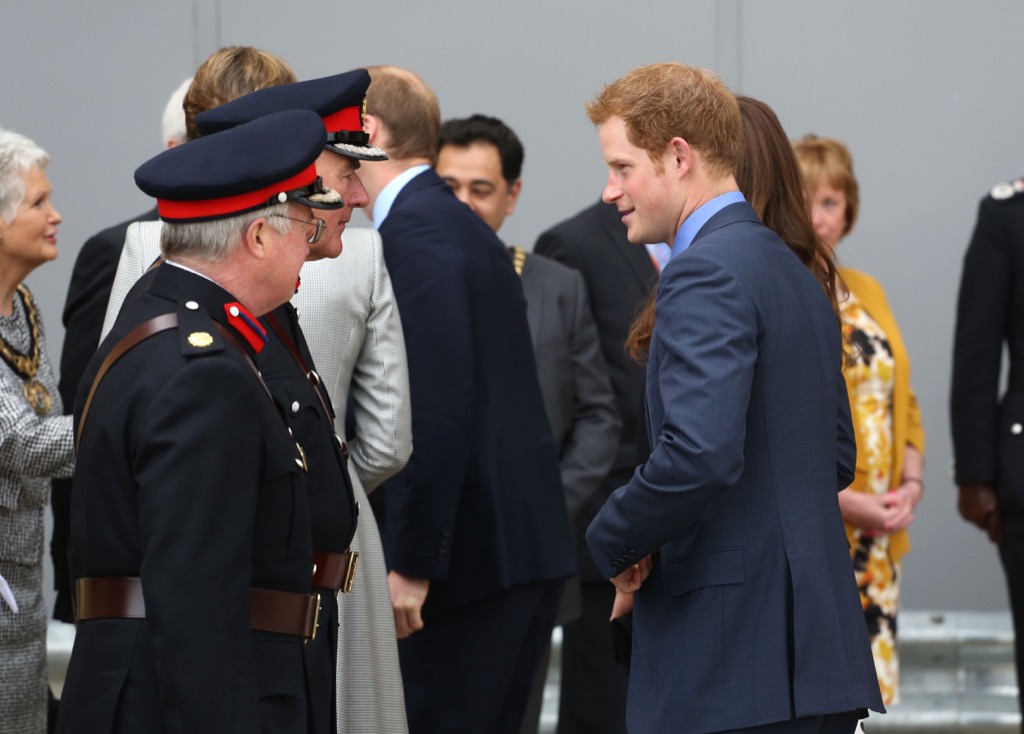 His activism is through "Heads Together," a charity he started with William and Catherine. "What we've tried to get across is the fact that everybody struggles. Whether it's daily stress, post-traumatic stress, whether it's depression, anxiety, alcoholism, whatever it is, it's okay to struggle," he's said. "It is a sign of strength to ask for help." 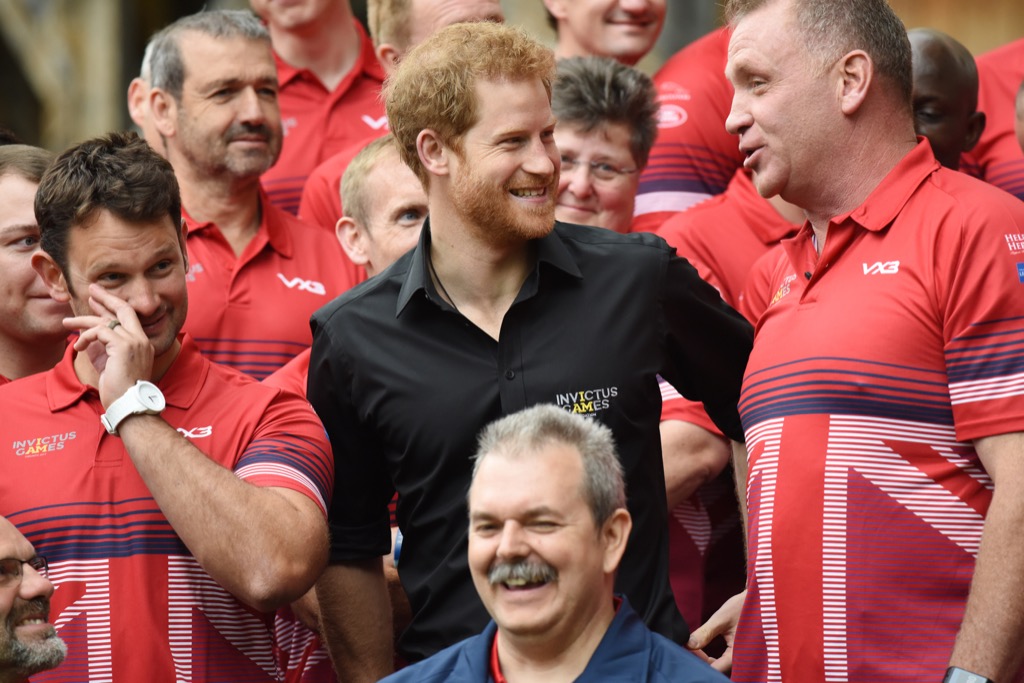 "All I want to do is make my mother proud," he told an interviewer earlier this year.

24
He still feels her presence 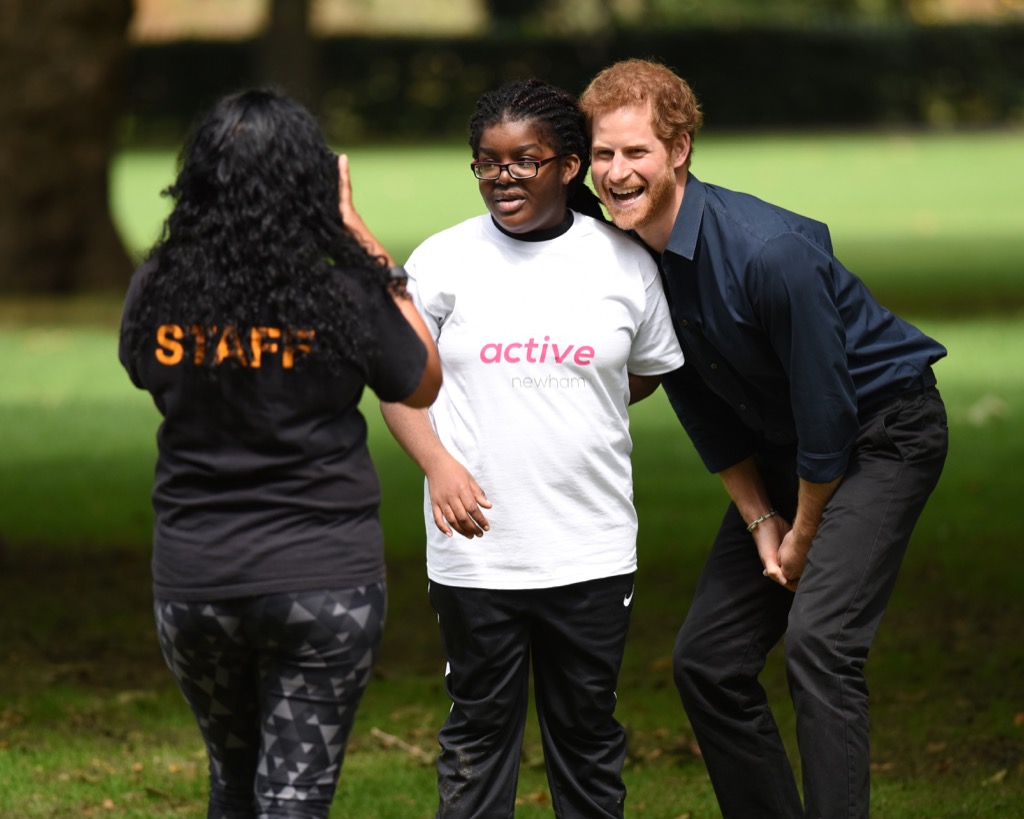 "I hope she's looking down, you know, with tears in her eyes, being incredibly proud of what we've established," he said earlier this year. "I'm sure she's longing for me to have kids so she can be a grandmother again."

25
He doesn't want to be King of England 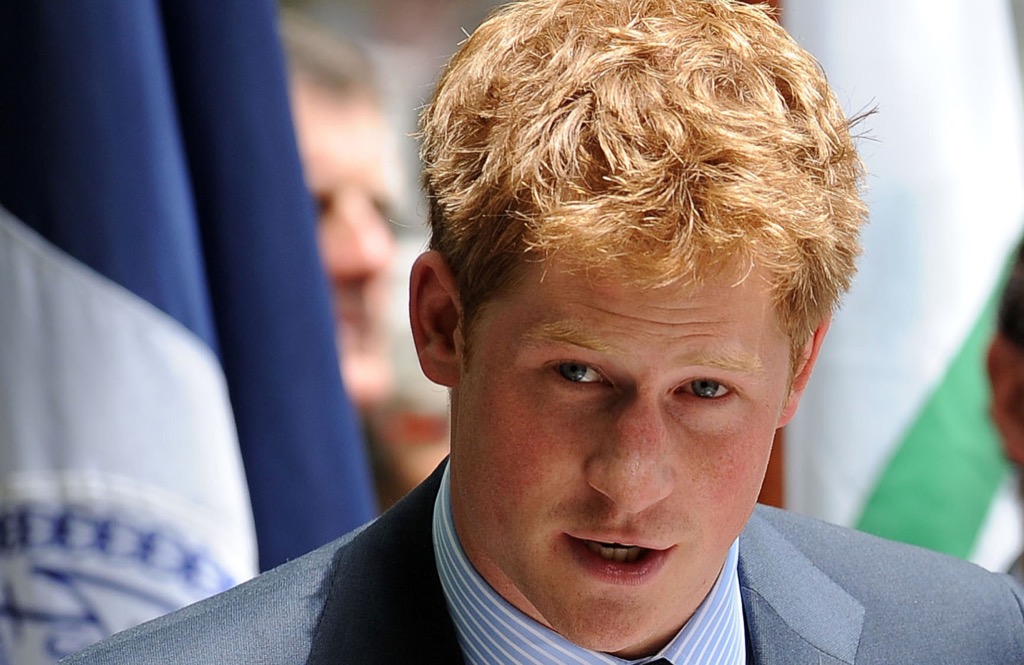 As fifth, soon to be sixth, in line for the throne, it's unlikely Harry will ever be king and that's perfectly fine with him. "Is there any one of the Royal Family who wants to be king or queen? I don't think so," he told Newsweek earlier this year. But he'll always be the King of People's Hearts.

Diane Clehane is New York-based journalist and author of Imagining Diana A Novel.