Royal cribs even the Windsors would be envious of

Buckingham Palace may be the most well-known royal residence in the world, but it is far from the most opulent. The current home of Queen Elizabeth II, originally known as Buckingham House, has 775 rooms, lush gardens, historic sculptures, and an iconic balcony—where crowds witnessed Princess Diana and Prince Charles kiss for the first time as husband and wife. (Their son, Prince William, would continue that tradition thirty years later when he married Kate Middleton in 2011). Yes, Buckingham Palace is no doubt impressive. But just wait until you see these other 10 palaces, all of which are even more luxe than the British royals' cozy cottage. And for more extravagantly wealthy monarchies, check out the 10 Royal Families Richer Than the British Royals. 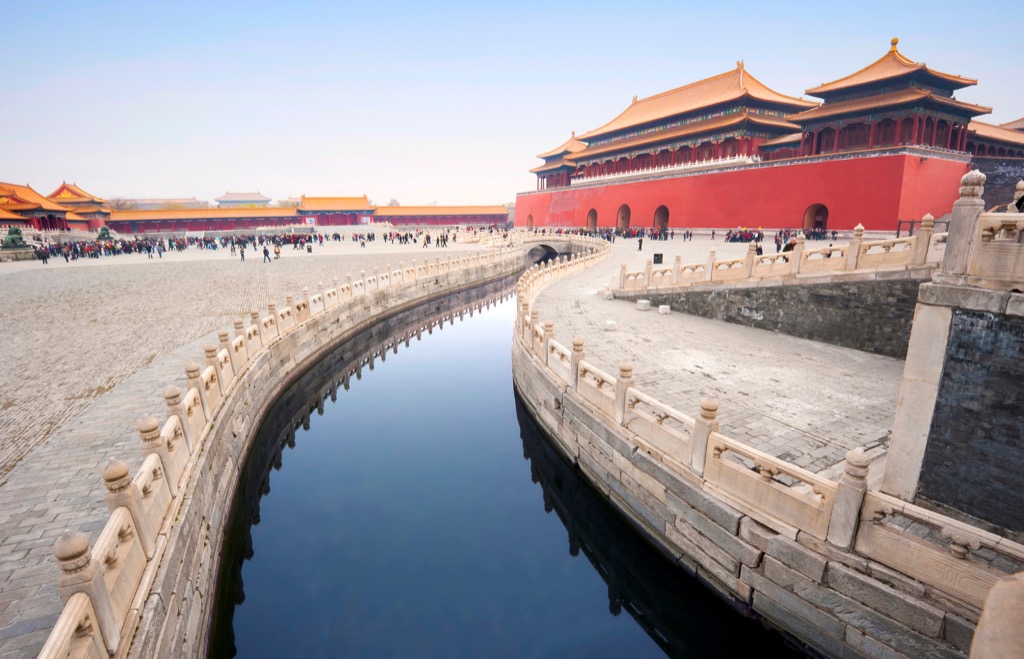 Built over the course of four years, from 1406 to 1410, The Forbidden City was the Chinese imperial palace from the Ming Dynasty to the end of the Qing Dynasty. Located in the center of Beijing, the sprawling property now houses the Palace Museum. Rectangular in shape, it is the world's largest palace complex, surrounded by a 52-meter-wide moat and a 10-meter-high wall with more than 8,700 rooms. The Forbidden City is so large, in fact, it's divided into two parts. The southern section (Outer Court) was for the emperor as ruler. The northern section (Inner Court) was the residence of the royal family. For almost 500 years, it served as the home of emperors and their households as well as the ceremonial and political center of Chinese government; now, it is one of China's most visited tourist attractions. And to inject some opulence into your own life, check out the 15 Killer Style Accessories You Never Knew You Needed.

2
The Palace of Versailles 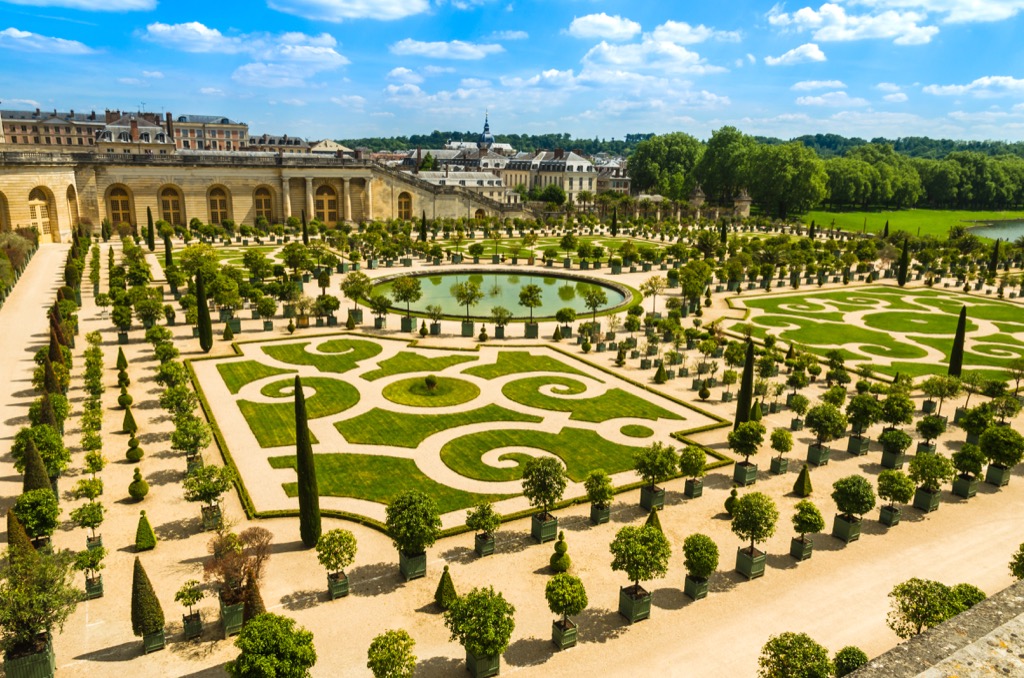 The iconic royal château in Versailles is located in the Île-de-France region of France and is world's largest royal domain—it comprises more than eight million square meters of grounds. Versailles was originally a hunting lodge and transformed into a spectacular palace by "Sun King" Louis XIV during the late 17th century. The palace has 700 rooms, including the stunning Hall of Mirrors, and houses 5,000 pieces of antique furniture and 6,000 historic paintings, while the impeccably manicured grounds feature 400 sculptures and 1,400 fountains. Composed of the palace, the gardens, the park, the Hall of Mirrors, the Trianon estate, and several buildings in town, today, the Estate of Versailles is one of the most popular tourist destinations in France. 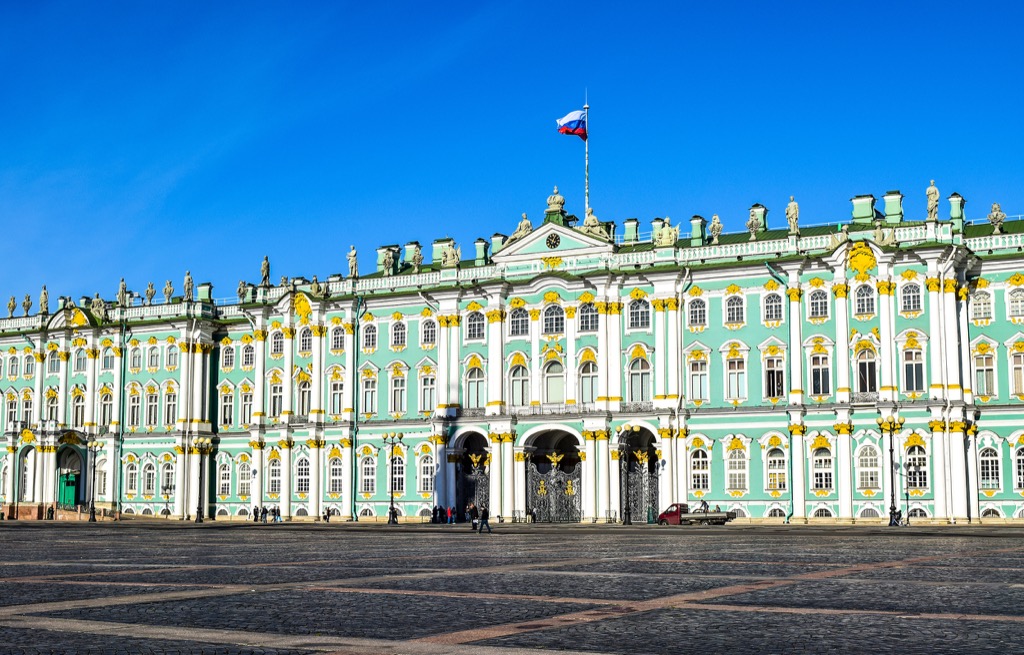 The Winter Palace in St. Petersburg was the official residence of the ill-fated Russian royal family and is now part of the Hermitage Museum. The most recent incarnation was built between 1730 and 1837, and sprawls over 60,000 square meters. Its 1,500 rooms are decorated in baroque and neoclassical styles and are filled with historical treasures including mummies, Old Master paintings, and diamond-encrusted Fabergé eggs. 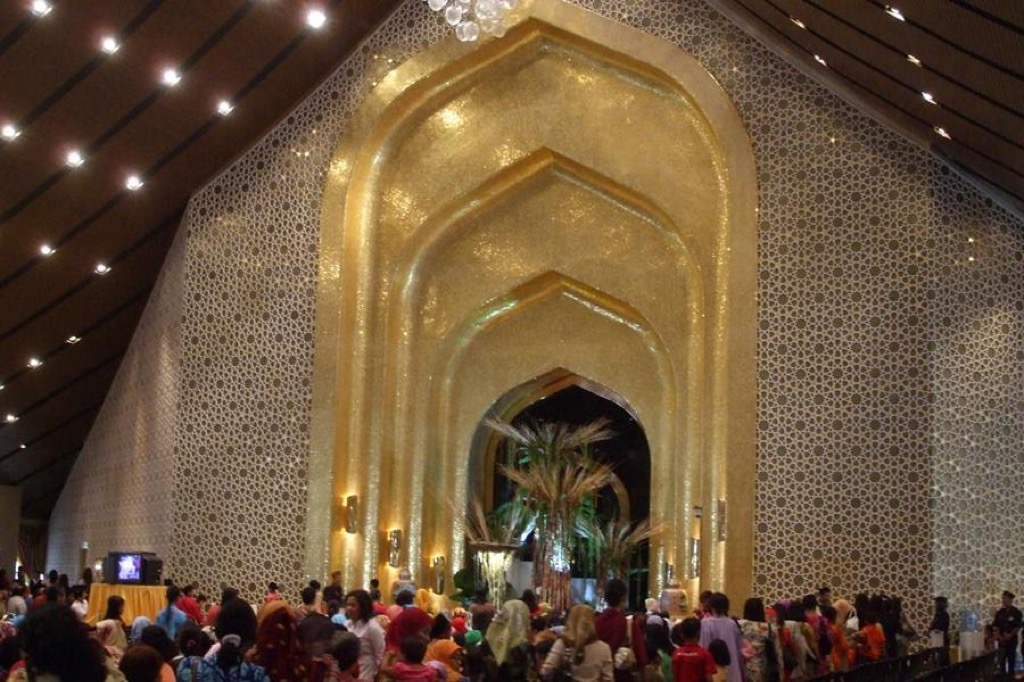 The palace is the official residence of Brunei's super-rich Sultan Hassanal Bolkiah. It is the largest palace in the world that is still in use as a royal residence. Built in 1984, the gilt-laden complex consists 1,788 rooms, a banquet hall seating 5,000 guests, and a mosque that can accommodate 1,500 worshippers. The resort-like residence also includes five swimming pools and a nightclub. 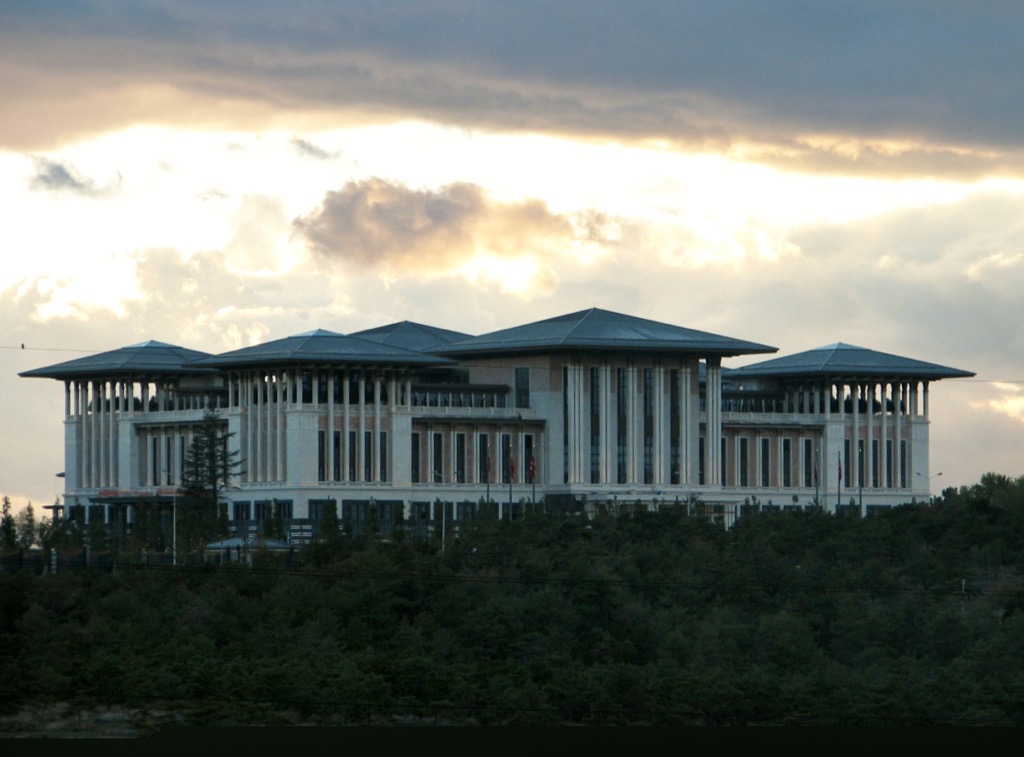 Turkey's new presidential palace in the capital Ankara was completed in 2014 at a cost of $615 million. The gigantic 1,150-room complex is four times larger than France's Palace of Versailles. Really. And if you're looking to travel to any of these sumptuous digs, be sure you know the 10 Worst U.S. Airports for Summer Travel. 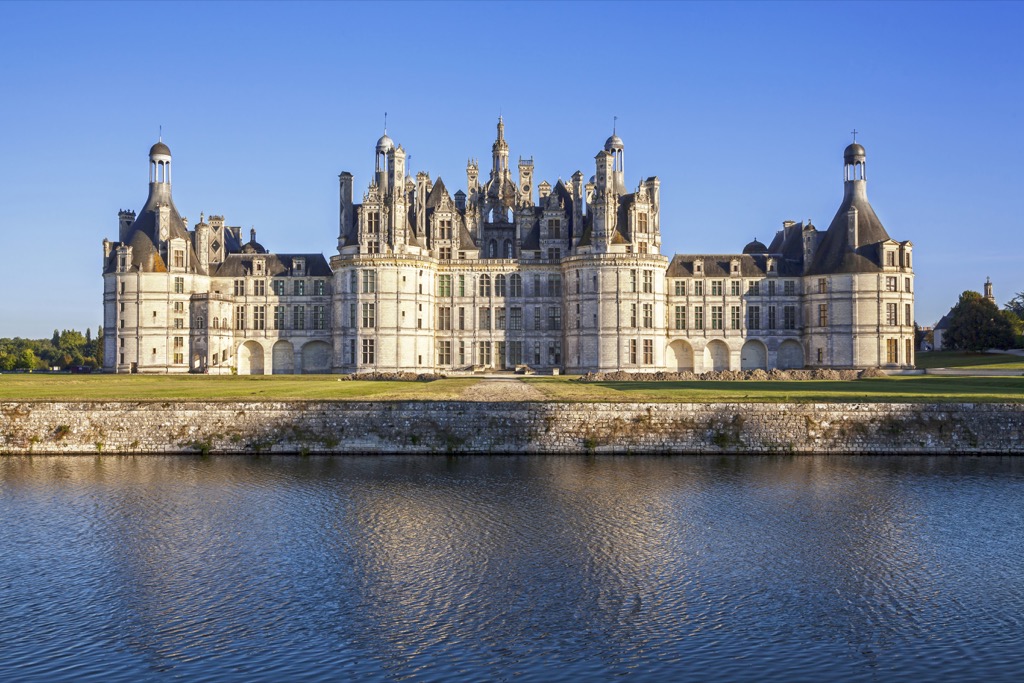 This stunning palace in Chambord, Loir-et-Cher, France, was built by King François I and is one of the most recognizable châteaux in the world. Its distinctive French Renaissance architecture, combined with classical Renaissance structures, has been heralded by many design experts, who consider it one of Europe's most beautifully opulent palaces. Severe flooding in 2016 damaged the grounds, but thankfully not the château itself. It is open to the public and receives millions of visitors every year. 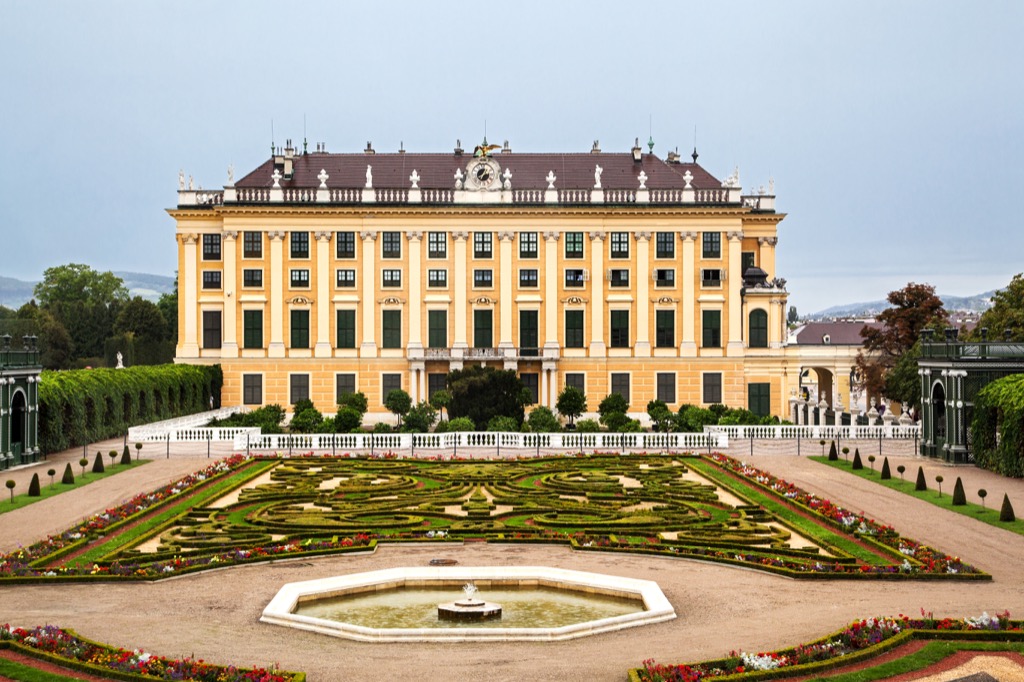 Located in Vienna, the Palace was a 1,441-room Rococo summer residence built for Emperor Leopold I in the early 1700s. The Palace Park is a world onto itself with the Privy Garden, the oldest zoo in the world, a maze and labyrinth, and the marble "Gloriette" (a summer "cottage"), which is situated on top of the property's highest hill. 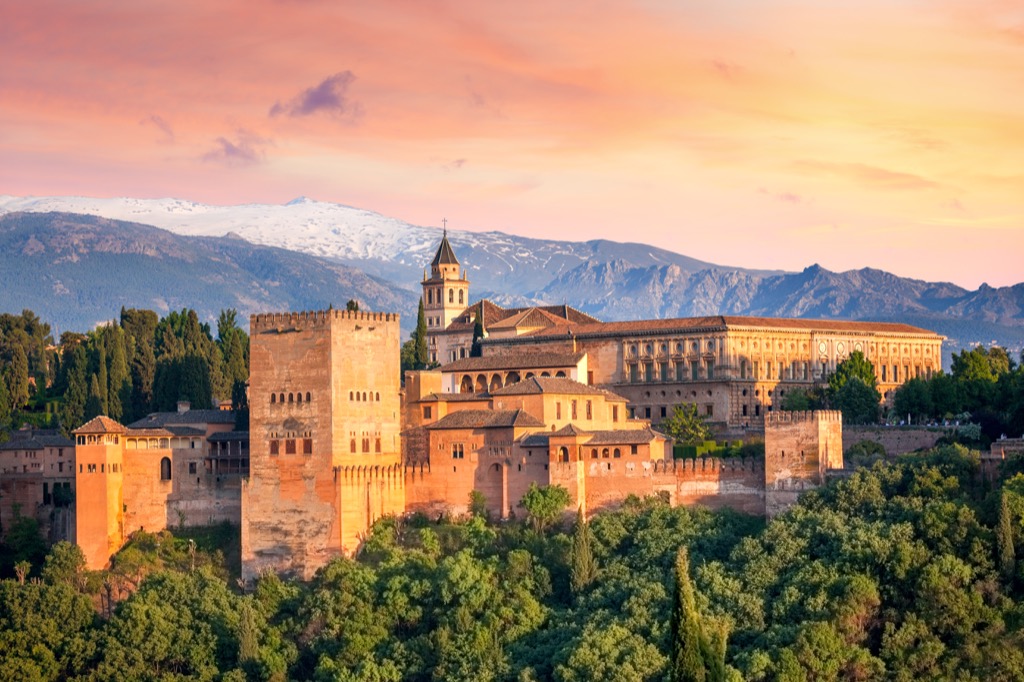 This palace in Granada, Spain, was originally constructed as a fortress in 889, and was converted into a royal palace in 1333 by Yusuf I, Sultan of Granada. The Alhambra's Islamic palaces were built for the last Muslim Emirs in Spain and the court of the Nasrid dynasty. The Alhambra is now one of Spain's major tourist attractions. 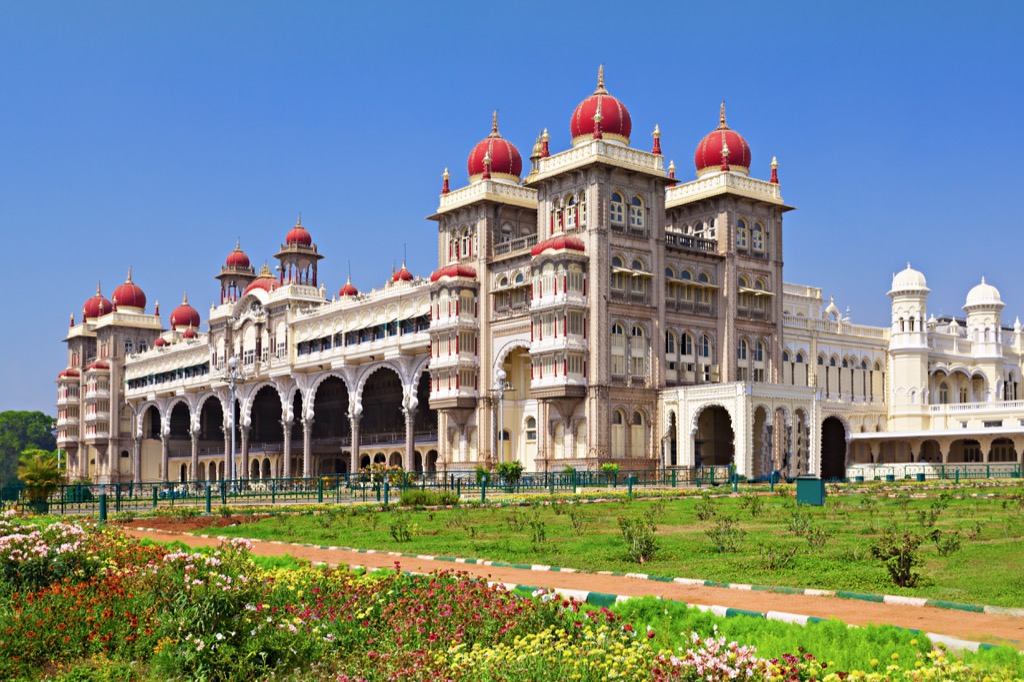 Among a city of palaces in India, Mysore Palace is the country's most famous regal residence. Also known as Amba Vilas Palace, it is the official residence of the Wodeyars, the erstwhile royal family of Mysore. It is among the most famous attractions in India—second only to the Taj Mahal—with more than 2.7 million visitors every year. 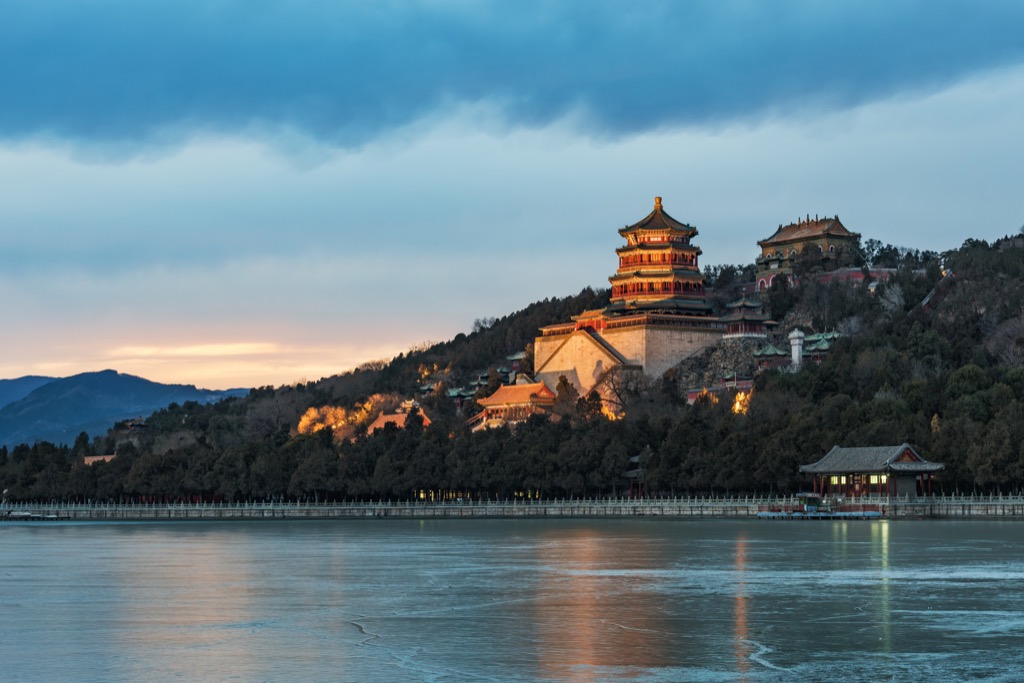 The palace in Beijing was used as a summer residence by China's imperial rulers—as a retreat from the Forbidden City. In 1750, the gardens were designed to reflect the styles of other luxurious palaces gardens popular at the time in China. The Kunming Lake was extended to imitate the West Lake in Hangzhou. In December 1998, UNESCO included the Summer Palace on its World Heritage List and declared the Summer Palace "a masterpiece of Chinese landscape garden design. The natural landscape of hills and open water is combined with artificial features such as pavilions, halls, palaces, temples and bridges to form a harmonious ensemble of outstanding aesthetic value."