Myrtle should be the new Madison. 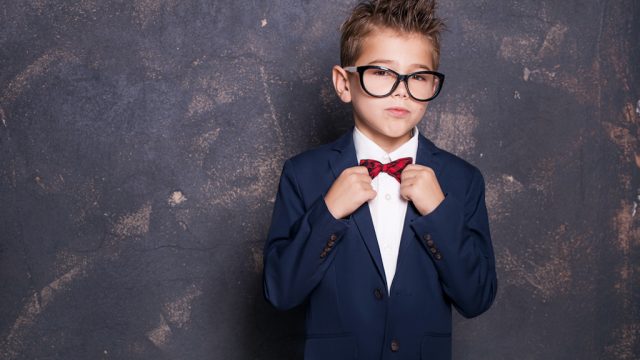 Names are a fascinating reflection of the time period in which you were born. There are even people out there who can pinpoint your age based on nothing but your given name.

Baby names tend to be trendy, so they fall out of fashion as time goes on. These days, you're sure to meet many young children named "Riley" or "Caden," while "Ruby" and "Chester" bring to mind the images of an elderly lady and a stuffy old man. But some old-fashioned names are so good, they absolutely deserve to have a comeback.

After all, there's nothing cuter than a 5-year-old with a name that belies a wisdom far beyond his years. So read on for the old-fashioned baby names we can't help but love. And for more inspiration, check out The 30 Best Literature-Inspired Baby Names.

George is just so ordinary, but Georg (pronounced gay-org, like the way the Baroness says it in The Sound of Music) sounds like old money. And don't you want to set your child up for financial success?

What better role model is there than Winston Churchill, the stalwart defender of the free world himself? Sure, he may have had more to drink than is deemed medically safe, but still, he got a lot done.

Because of Downton Abbey, this name calls to mind a plain young woman doomed for a life of spinsterhood. But Edith also sounds very reliable. You can always trust an Edith. An Edith will never let you down.

A name so dignified and bold, but also, when shortened to Archie, it conjures the image of America's favorite goody two-shoes teen. Archibald's got it all.

As Billy Crystal famously said in When Harry Met Sally, "A Sheldon can do your income taxes. If you need a root canal, Sheldon's your man." It may not be the sexiest name, but when you meet a Sheldon, you instantly know he aced math class. And if he's anything like the star of The Big Bang Theory, you may have a little prodigy on your hands.

In addition to drawing comparisons to the great writer Ernest Hemingway, this name yields the cornucopia of puns utilized in Oscar Wilde's The Importance of Being Earnest. He's basically got the title of his autobiography ready to go.

Is there anything better than naming your child after the adjective "felix," which means "happy" in Latin? Unfortunately, she'll probably be subject to an endless amount of "Bye, Felicia" jokes. But it's sure to build character.

In the classic Jane Austen novel Pride and Prejudice, Mr. Darcy's first name is Fitzwilliam, which brings to mind all the pomp and grandeur of the Romantic era. Also, Fitz is a pretty cute nickname.

You can't go wrong with a name that reminds people you are a total gem. Ruby is bound to sparkle.

Any Game of Thrones fan will associate this name with pure, unadulterated evil. But the meaning of this Anglo-Saxon name is "peaceful gift," and what better way is there of describing how we feel about a baby?

The name conjures up images of a crotchety old man eating soup and yelling at the neighbors to stop stealing his newspapers. But "Harold" has much more accomplished origins: It's derived from the Old English name Hereweald, meaning "army ruler." It's the kind of stately moniker a young man can grow into.

Rose has an adventurous spirit and daring nature, like the lead character in the 1997 blockbuster Titanic. Hopefully, your Rose will make room on that door for the love of her life.

Is there any other Humphrey than Humphrey Bogart? It's derived from the Germanic elements "hun," which means "bear cub," and "frid" or "fred," which mean "peace," and who doesn't want a sweet little bear cub?

Thanks to King Leopold II, who ruled Belgium from 1865 to 1909, it's impossible to say this name without thinking of royalty. You can also call him "Leo" for short, which is Latin for "lion" and reminiscent of DiCaprio. Win-win.

In Aramaic, the name means "lady or mistress of the house," which perfectly describes its most popular modern bearer, Martha Stewart.

He's definitely the head of the household, and he's the man that you want to go to when you need someone to give you a check. Plus, he can be Bob or Bobby for short, and it doesn't get more all-American than that.

The name tells you you're in the presence of greatness, someone who wears bold lipstick and has an elegant updo and who, despite her refined appearance, you do not want to cross.

The name derives from the biblical Hebrew word גִּזְבָּר (gizbar) meaning "treasurer." It's exotic, and anyone named Jasper is destined to be a successful artist.

Thanks to Princess Margaret, this name still carries connotations of convention-breaking royalty. Though, hopefully, it doesn't translate to some of her overly indulgent lifestyle choices.

If you name your kid Milton, you're setting him up for a life in academia and several books on James Joyce.

Myrtle is 70 years old, lives in a condo in Miami Beach, and has a lot more money than you think. Be more like Myrtle.

Harry Potter's Neville Longbottom has revitalized this name, which millennials now associate with someone who is both infinitely sensitive and brave. And also someone who grew up to be quite the looker.

It's an Italian name, which is perhaps why it sounds like he's going to sweep any girl off her feet. Orlando Bloom certainly helps with that.

It's from the Germanic word iv, meaning "yew," and since yew was the wood used to make bows, it's believed to have been an occupational name meaning "archer." Perhaps that's why it seems particularly fitting for a woman who is both extremely feminine and lithe, lean and strong.

It was made famous by the supposedly eight-foot-tall romantic hero and nephew of Charlemagne, who is celebrated in medieval poetry and song for his charm and his courage. Roland's a real catch.

There is no other name that makes it more obvious that you might be a witch and that everyone better watch out or else they'll get hexed. No one messes with a Tabitha.

Yes, the only Rolf in American pop culture turned out to be a total jerk, but the name itself evokes all the loyalty and majesty of a lone wolf.

It's a Greek name that means "God's gift," but it also reminds people of Theodore Roosevelt, who is generally considered to be one of America's best presidents. And it can be shortened to Teddy, everyone's favorite stuffed animal toy.

Winifred is of Welsh origin and it means "blessed peacemaking." It probably makes you think of a fair maiden with long red hair playing a harp in the woods. You can also shorten it to Winnie, the name of Kevin Arnold's ongoing love interest in The Wonder Years. Little Winifred will be the definitive girl next door.

Thanks to Batman, we associate this name with a wise butler, which makes sense since it's derived from the Old English Aelfraed, meaning elf counsel. How cool is that? You can also shorten it to Alfie, which we associate with the charming (albeit womanizing) titular character in Lewis Gilbert's 1966 film.

It's a girl's name of Latin origin meaning "from France or free man," and was popular in England during the Tudor aristocracy. But it's also had some stellar bearers in American culture, such as Francie from A Tree Grows in Brooklyn, Frances "Baby" Houseman in Dirty Dancing, the 1930s actress Frances Farmer, and today's acclaimed star Frances McDormand.

You just know Chester is going to spend his later days drinking brandy in an armchair in a small cottage in the British countryside while cheerfully greeting unexpected guests. This English name might mean "walled town," but we think Chester will be very welcoming.

The name is derived from the Old High German Hruodperht, a compound name composed of the elements hruod (fame) and perht (bright). Like Milton, Rupert is a born academic, and he spends his time reading, writing, and playing chess, which is not a bad way to live. And thanks to Harry Potter's Rupert Grint, he also now sounds like a steadfast friend who will always lead you in the right direction. We could also use a Rupert in our lives.