The 21 Most Talented Musicians Under 21

They may be young, but they've got serious skills.

Britney Spears came out with "…Baby One More Time" when she was just 17. Justin Bieber made it big with "Baby" when he was 16. And LeAnn Rimes won two Grammys when she was only 14! Yes, age is nothin' but a number when it comes to making music. And today, it's no different. Some of music's current biggest stars are so young, they can't legally drink or even vote in the U.S., but that's not stopping them from creating lyrics, sounds, and beats that move us. The following musicians making their voices heard in today's saturated market are not yet 21, which only makes them more impressive. Here are 21 of the most talented musicians under the age of 21.

Seventeen-year-old sensation Billie Eilish broke the mold when she posted her debut single "Ocean Eyes" on SoundCloud in 2015, drawing people in with her dreamy, somber track. Eilish made the song with her brother, Finneas, who she continues to collaborate with on almost all of her music. Despite being so young, Eilish already has seven gold and three platinum singles in the United States. She released her first studio album, When We All Fall Asleep, Where Do We Go, earlier this year, and it was an instant hit. This young powerhouse seems to have tapped into the hearts of Gen Xers, providing a new sub-genre of pop that resonates with people who have grown up expressing themselves on the internet.

2019 will forever be known as the year of Lil Nas X. First, he rose to fame with his country-pop song "Old Town Road," which became a viral sensation. Then, he continued to gain traction when he brought on Billy Ray Cyrus and Diplo to collaborate with him on remix versions of the track. The song remained at the top of Billboard's Hot 100 list for 19 consecutive weeks, which is quite impressive for anyone, let alone a 20-year-old rapper. As the song continued to soar, he also came out as gay, making him the first artist to do so while having a No. 1 record.

Halle Bailey is known as half of the duo Chloe x Halle, along with her older sister. They started out by posting covers on their YoutTube channel when Halle was only 11 years old. In 2013, they gained national attention with their powerful rendition of Beyoncé's "Pretty Hurts," which resulted in the singer herself signing them to her label. Since then, the Baileys have been featured in Queen Bey's Lemonade visual album, they opened for Beyoncé and Jay-Z on tour, and they performed "America the Beautiful" at the 2019 Super Bowl. It was also recently announced that Halle will be playing Ariel in the upcoming live-action version of The Little Mermaid, which is sure to take her to new levels of fame.

Imagine being 16 years old and having Elton John give you a shoutout on the radio. For Aussie Ruel, that's not just a dream, it's a reality. After being discovered by renowned producer M-Phazes in 2015, Ruel's hit single "Don't Tell Me" has made its way on to multiple charts, catching the ear of musical legend John. Ruel is already a superstar in Australia, and it's only a matter of time until he goes worldwide.

Daya wrote and recorded her first hit single, "Hide Away," when she was a junior in high school. Since then, her synthetic pop sound has landed her on The Chainsmokers' hit song "Don't Let Me Down," a performance at the 2016 White House Easter Egg Roll, and the release of her debut album, Sit Still, Look Pretty. 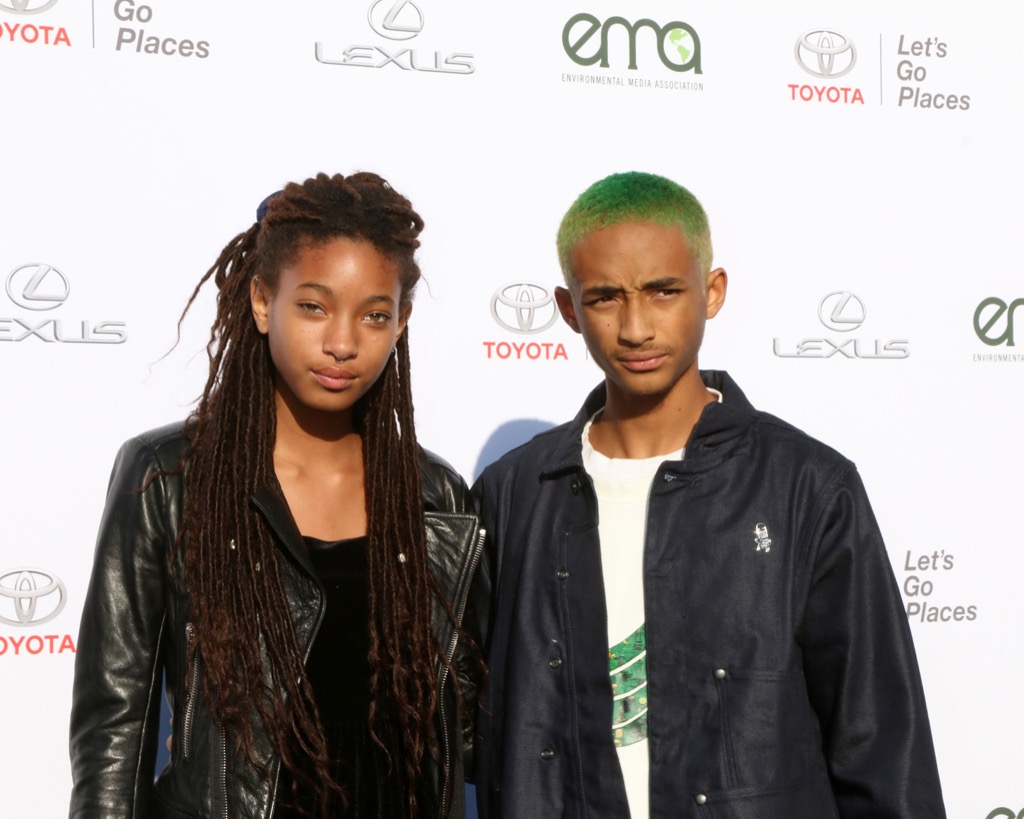 Willow Smith, daughter of Jada Pinkett Smith and Will Smith, won our hearts back in 2010 when she released "I Whip My Hair," a kid-friendly hip-hop song with wide-ranging appeal, at the age of nine. Ever since, Smith has continued making music. She dropped her third album, Willow, this past July, which she also produced.

Canadian singer Shawn Mendes got his start by posting videos on Vine. Then, from 2016 to 2018, he released three studio albums, all of which debuted atop the U.S. Billboard 200 chart. Mendes has broken a long list of records for his age, including becoming the first artist to get four No. 1 singles on the Adult Pop Songs chart before the age of 20.

Madison Beer is another vocalist whose talents were discovered on the magical world of the internet. In 2012, she received mass attention when Bieber tweeted out a link of her cover of Etta James' "At Last." Her original music—like the hit song "Hurts Like Hell"—combines pop and a sultry, blues-like element. She released her first EP, As She Pleases, in 2018, and is expected to drop a studio album sometime in 2019. With her strong vocals and influential social media presence (13.4 million followers on Instagram), Beer just might be the next Ariana Grande.

She may be the youngest of the Cyrus clan, but Noah Cyrus is already making her mark on the music industry. In the past three years, she has released a string of hit singles, starting with "Make Me (Cry)," which features British singer and rapper Labrinth. Her music has evolved overtime, gradually progressing into her own sound, separate from the country and pop music her father (Billy Ray) and sister (Miley Cyrus) have become known for respectively. We're excited to see where the process of finding her voice lands her.

Lennon Stella stepped into the spotlight with a viral video of her and her sister Maisy covering Robyn's "Call Your Girlfriend." Then, she starred on the hit country musical drama series Nashville before crossing over to the pop world with "Polaroid," alongside One Direction alum Liam Payne and Jonas Blue. Stella dropped her first EP, Love, Me, in 2019, so it looks like things are just heating up for this TV-star-turned-pop-artist.

Grace Vanderwaal started out as the adorable 12-year-old singing and playing the ukulele on the stage of America's Got Talent. After winning the show—and the adoration of viewers—Vanderwaal went on to open for acts like Imagine Dragons and Florence and the Machine. Her music showcases a maturity beyond her years, both with its evolved sound and profound lyrics.

Lil Pump (whose real name is Gazzy Garcia) is an American rapper who has proved himself as a young, promising talent after debuting his self-titled album in 2019. It peaked at No. 3 on the Billboard Hot 100 and then he landed a spot on Forbes' "30 Under 30" list. Needless to say, he's having a moment.

Listening to her soulful, powerhouse of a voice, you'd find it hard to believe that Isabelle Brown is only 16 years old. The maturity of her velvety vocals will give you hope for the future of soul. Luckily, the talented young singer-songwriter is starting to gain more traction with her new single, "What U Waiting For."

New Jersey native IV Jay started out by covering pop songs and posting them to her Instagram page. But now, she's making her own music, pivoting to the R&B genre that her buttery voice lends itself to. Her hit single "Thirsty" is a great example of her talent and sound, and a sure sign of more captivating tracks to come.

Whethan creates techno music with a unique dubstep and trap house blend that managed to catch the attention of Skrillex. This young DJ-producer has also gone on tour with The Chainsmokers and collaborated with Dua Lipa, so he must be doing something right. Not bad for a guy who just graduated high school.

Olivia O'Brien scored her big break when she collaborated with rapper and DJ Gnash on his single "I Hate U, I Love You," which reached No. 10 on the Billboard Hot 100. Since then, she has released her debut studio album, Was It Even Real? and proved she has a natural presence that's bound to make her a household name.

Black queer female rapper Kodie Shane is a captivating young artist on the verge of stardom. This Chicago-raised, Atlanta-based rapper made a name for herself with her hit single "Sad" in 2016. Then, she dropped her debut album, Young Heartthrob, in 2018. She has the unabashed confidence and undeniable talent of an icon in the making.

Petit Biscuit, born Mehdi Benjelloun, is a young French DJ and producer whose career is soaring before he's even entered his second decade. His tropical house electronic music made his 2016 self-titled EP a real standout. You can also listen to his 2017 album, Presence, on Spotify, and fall in love with this electro-house symphonies.

Young Chicago native Ravyn Lenae is bringing a new sound to the R&B genre. Teen Vogue described it as "an amalgam of hip hop, jazz, and electro," and noted that her most recent EP, Crush, will "bring you to your knees." Get ready to hear more about this devastatingly good singer for years to come.

Rich Brian is an Indonesian rapper who made his way to Hollywood via his self-taught mastery of social media. In 2017, he appeared on Rolling Stone's "25 Under 25" list, four years after 13-year-old Brian started posting comedy videos to YouTube and Twitter. His video for "Dat $tick" went viral in 2016, amassing more than 127 million views. And his most recent album, The Sailor, dropped this past July.

Mallrat (born Grace Shaw) started her music career in her hometown of Brisbane, Australia, at the age of just 15. She quickly proved herself to be worthy of recognition by performing at festivals and opening for big names such as Post Malone. She debuted her first EP, In the Sky, in 2018, and we expect this to be the first of many inventive pop albums from her. And for more hit music that's currently topping the charts, here are The 50 Best Songs of 2019 So Far.