13 Famous Firsts From the LGBTQ Community

These people and events changed the course of history.

In June of 1969, the Stonewall Riots in New York City brought worldwide attention to the plight of the LGBTQ community. The riots—which took place after a police raid of the Stonewall Inn, a gay bar in New York City—served as a catalyst for the gay rights movement in the United States and across the globe. And 2019 marks the 50th anniversary of those events.

The anniversary also takes place during LGBT Pride Month, which is celebrated in June to commemorate the Stonewall Riots. To honor that, we've rounded up some of the most historic firsts from the LGBTQ community, from the first pro-gay film to the first state to repeal sodomy laws. Here's to remembering how far we've come—as well as how far we still have to go.

Der Eigene (The Own), which was published from 1896 to 1932 by Adolf Brand from Berlin, Germany, is considered the first gay journal in the world, according to Out magazine. Throughout the periodical's nearly 40 years of publication, it covered topics like homosexuality and bisexuality in a number of literary and artistic ways, including poetry, prose, political manifesto, and nude photography. Ultimately, Der Eigene ceased publication due to pressure from the Nazi regime.

Founded in Berlin, Germany, in May 1897, the Scientific-Humanitarian-Committee served as one of the first LGBT rights groups in the world. The organization was created by Magnus Hirschfeld, a Jewish-German physician and sexologist, to give voice to LGBT people and campaign against their legal persecution. (This is a photo of a plaque dedicated to him in Berlin.)

One of the committee's first initiatives was a petition to repeal Paragraph 175, an anti-gay piece of legislation in Germany's Imperial Penal Code, which criminalized sexual acts between men. While the group was ultimately unsuccessful in that mission, it did pave the way for similar LGBT rights organizations around the world. For example, after being inspired by Hirschfeld's work overseas, Henry Gerber created the Society for Human Rights in Chicago in 1924. It was the first gay rights organization in the United States

On September 24, 1951, 25-year-old Christine Jorgensen became the first American to undergo sex reassignment surgery, effectively changing her sex from male to female. While similar operations had been performed in the past, Jorgensen became one of the first people to undergo hormone treatments as well. Upon her return to America from Copenhagen, Denmark, where the surgery took place, Jorgensen became an instant celebrity, with the story of her transition making the front page of the New York Daily News.

Jorgensen used this newfound publicity to advocate for trans rights, publishing her autobiography, Christine Jorgensen: A Personal Biography, in 1967, and touring the country to speak about her experiences. To date, Jorgensen is still viewed as one of the foremost trailblazers in the trans-rights movement.

In the early part of the 20th-century, a number of laws were passed in the United States to hinder the LGBTQ community. Some of these laws included immigration legislature that banned "persons with abnormal sexual instincts" from entering the country (1917) and an executive order made by Dwight D. Eisenhower that banned gay people from attaining jobs in government offices (1953). And then, of course, there were the sodomy laws that had been in place in each state for decades, which made engaging in homosexual acts a criminal offense.

In 1961, Illinois became the first state to repeal those sodomy laws and decriminalize homosexual contact between consenting adults, according to the American Civil Liberties Union. The rest of the country was slow to catch on; the next state to follow suit was Connecticut a decade later in 1971. Finally, in 2003, sodomy laws were proven unconstitutional by the Supreme Court, which invalidated them in the 14 states where they still existed. 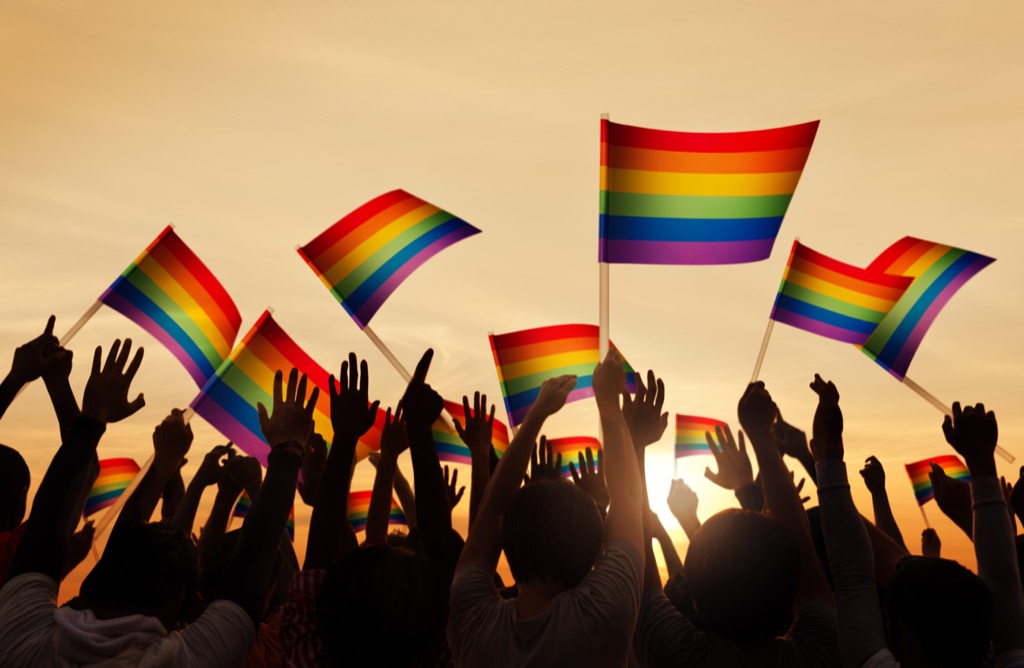 The first pride march was a commemoration of the first anniversary of the historic Stonewall Riots. Five months after the riots, activists Craig Rodwell, Fred Sargeant, Ellen Brody, and Linda Rhodes made a proposition at the Eastern Regional Conference of Homophile Organizations that there be an annual march in New York City to commemorate the event on the last Saturday of every June, according to History.com. Back then, it was called the Christopher Street Liberation Day, although the march was a precursor to what would later become the NYC Pride March that still takes place today.

Multiple LGBT rights organizations, including the Gay Liberation Front and the Gay Activists Alliance, came together to form this march—and The New York Times reported that participants took up nearly 15 city blocks at the initial march. Ultimately, it was the Christopher Street Liberation Day demonstration that paved the way for pride marches around the world.

6
That Certain Summer becomes the first film to positively portray a gay couple (1972).

Released in 1972, this American made-for-TV drama that premiered on ABC was the first to offer a sympathetic portrayal of homosexuality. Featuring actors Hal Holbrook and Martin Sheen as life partners, That Certain Summer was critically acclaimed—albeit somewhat controversial—and went on to win that year's Golden Globe for Best Movie Made for TV.

In a 2007 interview with The Dallas Voice, Sheen was asked if he had any hesitation in accepting the role of a gay man in the early 1970s. He noted that he'd "robbed banks and kidnapped children and murdered people" in past roles and that he couldn't understand why people thought that "choosing to play a gay guy" was "considered a career ender."

7
PFLAG becomes the first organization created for allies of the LGBTQ community (1973).

After participating in New York City's Christopher Street Liberation Day in 1972, Jeanne Manford (who's seen holding the "parents" sign in the photo above), the mother of Morty Manford, a gay man, created PFLAG in 1973. The acronym stands for Parents and Friends of Lesbians and Gays. According to the PFLAG website, she decided to start the support group because of her experience at the march, where "many gay and lesbian people ran up to [her] … and begged her to talk to their parents [for them]."

PFLAG is widely accepted as the first support group for allies of the LGBTQ community. Its creation inspired similar groups offering "'safe havens' and mutual support for parents with gay and lesbian children" across the country, according to its website. Since 1973, PFLAG has grown exponentially, with more than 400 chapters existing in various cities across the country. In 2012, Manford was posthumously awarded the Presidential Citizens Medal by President Barack Obama.

While many believe the title of first openly gay person to win a U.S. election goes to Harvey Milk, the California politician who was assassinated in 1978, the honor actually belongs to Kathy Kozachenko. She was elected to city council in Ann Arbor, Michigan, in 1974—three years before Milk was elected to the San Francisco Board of Supervisors.

In 2015, Kozachenko spoke of the win with Bloomberg. "I don't think I was brave, because I was in a college town where it was cool to be who I was," she says. "On the other hand, I stepped up and did what I felt needed to be done at the time. Maybe that's the whole story, that ordinary people can do something that then other people later can look back on and feel really good that they did this."

The first trans-protective legislation, which was drafted and passed by the city of Minneapolis in 1975, effectively "barred discrimination on the basis of having or projecting a self-image not associated with one's biological maleness or one's biological femaleness," according to NBC.

At the time, the Midwestern city had become a hotbed of LGBTQIA+ activism and was one of only two cities in the country to offer sex reassignment surgery. Unfortunately, when the ordinance was passed, it was hardly covered by local or national media outlets. Despite this lack of acknowledgment, Minneapolis paved the way for other cities to adopt similar measures to protect transgender people. Since then, more than 200 cities and 17 states have adopted similar transgender-inclusive nondiscrimination laws. 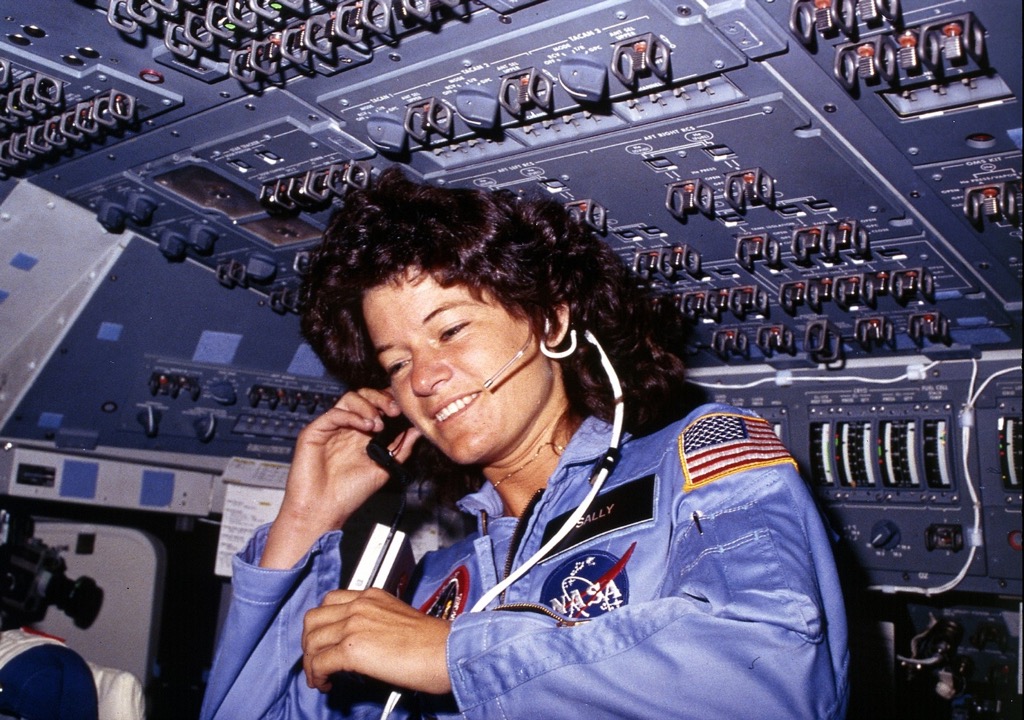 Not only did Sally Ride make history as the first American woman to go to space in 1983, but she also became the first queer astronaut in the world, according to the National Women's History Museum. Though she was not out at the time, it was revealed after her death in 2012 that Ride had been in a 27-year relationship with her partner, Tam O'Shaughnessy.

After Ride's death, her sister, Bear Ride, sent a note about her sister's legacy to several news organizations. It included the following quote, according to NBC: "Sally never hid her relationship with Tam. They were partners, business partners in Sally Ride Science, they wrote books together, and Sally's very close friends, of course, knew of their love for each other. We consider Tam a member of our family."

After 23 years of ordained service as a Presbyterian minister, Reverend Erin Swensen from Georgia transitioned from male to female in 1996. After her surgery, the Presbytery of Greater Atlanta voted 186 to 161 to allow Swensen to sustain her ordination as a minister. The vote made her the first openly transgender minister of a mainstream religion to make a gender transition while remaining in ordained office, according to the LGBTQ Religious Archives Network.

Today, Swensen serves as a board member of the Georgia Association for Marriage and Family Therapy and has been a licensed psychotherapist who's specializeed in transgender experience for 20 years, according to her personal website.

In April of 1997, Ellen Degeneres, then the star of the ABC sitcom Ellen, appeared on the cover of Time magazine alongside the cover line "Yep, I'm Gay." Two weeks later, she did an interview about the news with Oprah Winfrey on The Oprah Winfrey show. And just hours after that interview, DeGeneres' character on Ellen came out as gay as well in an episode famously called "The Puppy Episode," according to Vanity Fair. The episode drew a staggering 44 million viewers—and earned Degeneres a Peabody Award for presenting the emotions of a queer person with depth and "groundbreaking humor."

On May 17, 2004, the first legally acknowledged same-sex marriage in the United States took place between Marcia Kadish and Tanya McCloskey at Cambridge City Hall in Massachusetts. The ceremony came after the Massachusetts Supreme Court deemed the state's former ban on same-sex marriage unconstitutional. Over the course of that day, 77 other same-sex couples married across the state.

In 2013, the United States Supreme Court gave the final word on marriage equality when it struck down the Defense of Marriage Act, which had stated that marriage should only be legally viewed as a union between a man and a woman. Since that landmark decision, same-sex marriage has become legal in all 50 states. And for more about the LGBTQ experience, check out these 15 Coming Out Stories That Will Melt Your Heart.

Ashley Moor
Ashley hails from Dayton, Ohio, and has more than six years of experience in print and digital media. Read more
Filed Under
Celebrities • Fun Facts • LGBTQ • Trivia
Read This Next
Latest News
Read This Next