You know MLK and Rosa Parks, but what about these unsung heroes who fought for civil rights?

The civil rights movement may have started nearly 70 years ago, but its mission to ensure that all Americans be shown the same dignity and equality is just as relevant today as it was more than half a century ago. And while history-changing icons at the forefront of the movement, such as Martin Luther King, Jr., Malcolm X, and Rosa Parks remain household names to this day, there are countless others who doggedly fought for their own rights and the rights of others. These hidden civil rights figures were just as pivotal to the movement, so brush up on your history by learning the ways in which they helped shape the course of history.

As an early organizer in the Journey of Reconciliation, Bayard Rustin was a seminal figure of the civil rights movement who promoted non-violent actions for change. He was the chief organizer of the historic March on Washington and a mentor to Martin Luther King Jr., introducing the pivotal activist to Gandhi's philosophy of non-violent resistance, as well as tactics of civil disobedience. As an openly gay black man, Rustin bravely advocated for the LGBT community despite being persecuted, and even arrested, for his sexual orientation.

Mississippi-born Fannie Lou Hamer was a voting rights and women's rights activist who worked to abolish racially-biased voting requirements in the South. At just six years old, Hamer started to work in the fields as a sharecropper, but in 1962, she decided to travel with 17 others to register to vote at the county courthouse in Indianola, Mississippi. Her act of defiance got her fired from the only job and life she had ever known, just for registering to vote. But this only strengthened her fight for the cause.

Hamer helped found, and served as its vice chairperson, the Mississippi Freedom Democratic Party, worked alongside the Student Nonviolent Coordinating Committee (SNCC), and played an integral role in the fight for equal education.

As one of the leaders behind the March on Washington, activist Dorothy Height fought tirelessly for the rights of the black community, as well as women, until her death in 2010. Her focus on political mobilization was crucial in giving a voice to women who were excluded from getting involved in politics. Height also helped create the National Women's Political Caucus alongside notable feminists, Gloria Steinem and Betty Friedan, and was awarded the Presidential Medal of Freedom in 1994.

Frank Smith, Jr., PhD, helped found the SNCC while still a student at Morehouse College, and worked with the organization to register African American voters in Mississippi and Alabama. He is also noted for his key role in the organization of protests and marches during the Freedom Summer, a 1964 voter registration drive to increase the number of black voters in Mississippi.

Before there was Rosa Parks, there was Claudette Colvin. This civil right icon was arrested for refusing to give up her bus seat to a white passenger nine months before Parks famously made the same protest in Montgomery, Alabama. Colvin also served as a plaintiff in Browder v. Gayle, the groundbreaking case that ruled Alabama's bus segregation laws unconstitutional.

After breaking ground as the first black female Episcopal priest, Pauli Murray earned a law degree and became California's first black deputy attorney general. Murray was also one of the early proponents of intersectional feminism, bringing to light the disproportionate effect racial discrimination had on women of color.

While Charles Hamilton Houston's death preceded the widely-accepted start of the civil rights movement by four years, his influence on the movement was undeniable. A Harvard-educated lawyer, Houston was, among many other things, instrumental in challenging the racially discriminating Jim Crow laws, which led to the U.S. Supreme Court decision to declare racial segregation in public schools unconstitutional. 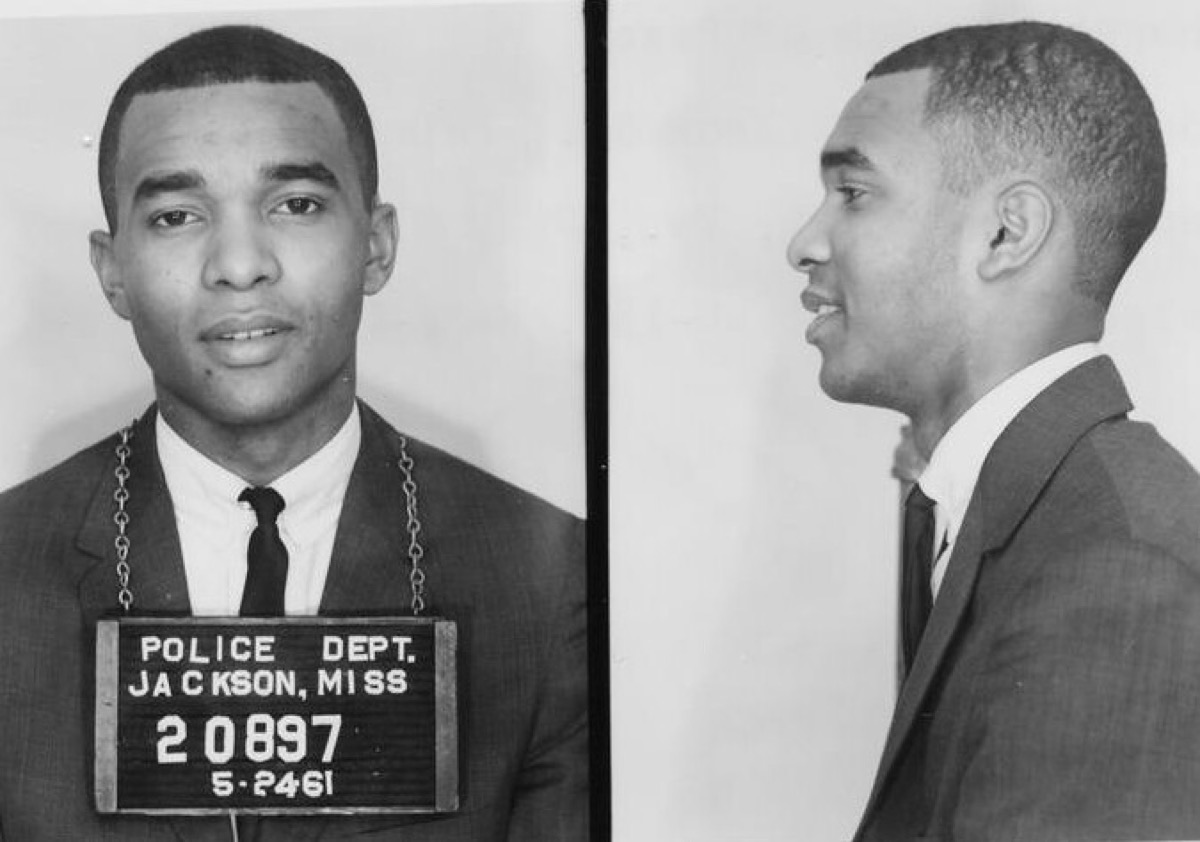 In addition to facing off against members of the American Nazi party as student activist at Howard University, Dion Diamond was an early counter-protester, and made it his point to, as he told StoryCorps, "crash segregated society." One of those ways he did that was by protesting a group of anti-integration picketers at a Maryland amusement park in 1960, for which he was arrested.

After facing firsthand verbal abuse for sitting in the empty white section of a city bus, Jo Ann Robinson became a major player in the notable Montgomery bus boycotts. As an early member of the Women's Political Council, where she was named president in 1950, Robinson and her fellow members were instrumental in bringing the civil rights movement into the national spotlight.

Asa Philip Randolph's equality efforts date all the way back to World War I. As a major organizer of anti-discrimination and anti-segregation protests, Randolph served as the leader of America's first primarily black labor union, Brotherhood of Sleeping Car Porters.

An anti-segregation activist, Ella Baker was a founding member of the SNCC, as well as a major player in the National Association for the Advancement of Colored People (NAACP) and the Southern Christian Leadership Conference (SCLC). She remained a fervent advocate for equal rights until her death in 1986.

Long before the civil rights movement picked up steam in the 1950s, Hiram Revels was laying the groundwork for what was to come. Revels, a minister and Civil War veteran, was the first black man elected to the U.S. Senate, a position he chose to leave to serve as president of Alcorn Agricultural and Mechanical College. He continued to be a staunch advocate for the integration of American schools and equal rights for African American workers.

Martin Luther King Medal of Freedom winner and activist Amelia Boynton Robinson was a central figure in the infamous 1965 march to Selma, Alabama known as Bloody Sunday. Robinson attempted to cross a bridge to Selma after she and fellow protesters marched from Montgomery to demand their right to register to vote. Met by state troopers, Robinson was gassed, whipped, and badly beaten before being left for dead. A photograph of her taken moments after the brutal assault was published in newspapers and magazines around the world. Robinson continued to be a seminal figure and advocate of the civil rights movement until her death in 2015 at the age of 104.

A major promoter of non-violent resistance, activist Diane Nash organized both lunch counter and school sit-ins. As a front line member of the the Freedom Riders, a group of activists that went from state to state protesting segregation, Nash and her fellow riders regularly put themselves at risk, facing angry mobs of locals in each town they staged their protests.ae0fcc31ae342fd3a1346ebb1f342fcb

"I decided to give myself a time limit for fear. At the end of that time period, I will either have gotten myself together enough so that I can do my job well, or I am going to go back to the church (their headquarters), and resign," she recalled in an interview for an episode of MAKERS.

Presidential Medal of Freedom recipient Whitney M. Young, Jr. served as the executive director of the National Urban League, the president of the National Association of Social Workers, and was a dedicated anti-poverty and pro-education crusader until his death in 1971.

New York State Assembly member Shirley Chisholm was the first black woman elected to the U.S. House of Representative, as well as the first black major-party black to run for president, which she did in 1972. She was posthumously awarded the Presidential Medal of Freedom in 2015.

Mississippi native Luvaghn Brown served as a major force in the movement to integrate the South, participating in anti-segregation sit-ins before joining the SNCC. Getting involved in activism at an early age, Brown was arrested multiple times for his work—the first being at age 16 for his participation in a sit-in protest at a Walgreen's lunch counter in Jackson, Mississippi in 1961.

Organizer and journalist Daisy Bates, who led the NAACP's branch in her home state of Arkansas, was a key figure in spreading news of desegregation ruling violations around the country, and she also served as an important mentor to the Little Rock Nine, a group of civil rights activists essential to the fight for equal education rights in Arkansas.

Once denied a teaching job in Washington D.C. for being "too dark," Nannie Helen Burroughs went on to create the National Training School for Women and Girls, a trade school for black high school and college-aged girls, in 1909. After her death in 1961, the school, which integrated themes of racial pride and community activism into its curriculums, was renamed in her honor in 1964.

As the first African American woman to be appointed to the cabinet of a New York City mayor, Anna Arnold Hedgeman spent more than six decades as an advocate for civil rights. She was instrumental in planning the March on Washington and broke ground as a leading player in Harry Truman's 1948 presidential campaign.

In 1960, at just six years old, Ruby Bridges became the first black student to integrate an elementary school in the South. During her first year at William Frantz Elementary School in New Orleans, Bridges and her mother were escorted by federal marshals every day due to the hateful and threat-fueled reactions of the school's students, as well as their parents. Only one teacher at the school would accept Ruby as her student, and no other children attended class with the teacher and Ruby, who never missed a single day.

James Meredith became a powerful figure in the civil rights movement through his tireless resistance against racial segregation in universities across the country. After repeated applications were rejected on the basis of race, Meredith, who was served in the Air Force, became the first African American student to attend the University of Mississippi. He also lead his own solitary protest march, the March Against Fear, in 1966, at the end of which he was shot by a sniper, but managed to survive and continue to fight for equality in America.

As a southern minister, Fred Shuttlesworth worked hand-in-hand with the NAACP to increase voter registration among African Americans, in addition to helping establish the SCLC. And in a fight to overturn Birmingham segregation laws, he created the Alabama Christian Movement for Human Rights in 1956. All his work helped him receive the Presidential Citizens Medal from President Bill Clinton in 2001.

Sarah Crow
Sarah Crow is a senior editor at Eat This, Not That!, where she focuses on celebrity news and health coverage. Read more
Filed Under
1960s • Facts • History
Read This Next
Latest News
Read This Next