It's a delightful mix of soothing tracks and the actor's own dulcet tones.

One of the things that makes Bill Murray so endlessly, irrevocably cool is that, unlike other celebs, he often doesn't publicize his weird pet projects. In his rock-hippie way, he just does whatever he feels like, and then puts it out into the universe, figuring that people will find it, and, if not, well then, whatever.

Which is precisely why you've probably never heard of "Intense Studying," a Spotify playlist designed to help you study, unless you've accidentally stumbled upon it. The off-beat and oddly soothing playlist is filled with classical music, with Murray reading poetry or dolling out studying tips in between, and sometimes during, pieces. 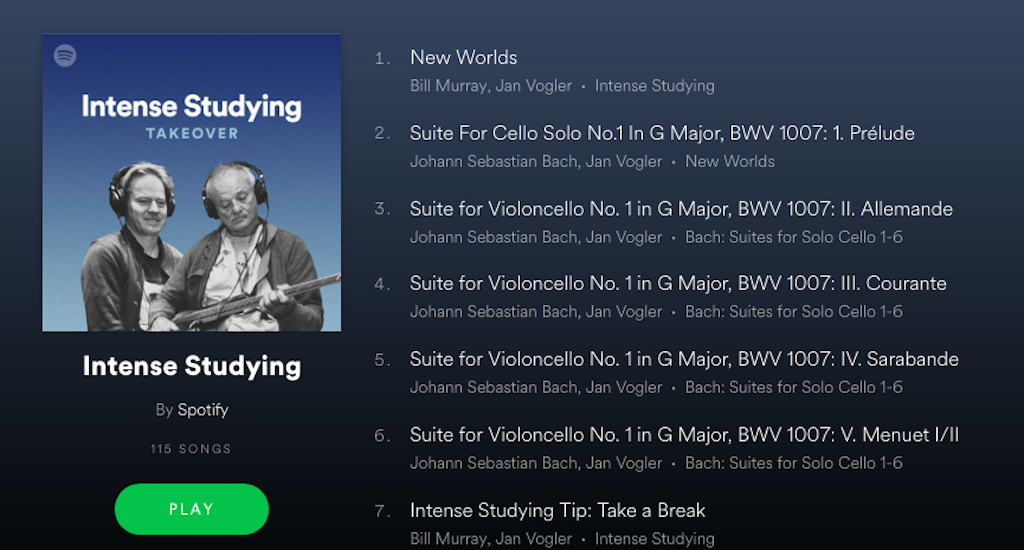 "Here's the thing about intense studying," he advises in between Italian composer Ludovico Einaudi's gorgeous rendition of "Divenire" and his own dramatic reading of Walt Whitman's "Song of Myself." "You can't cram. If you go away and study something else you can learn better. I recommend you go do something else. You'll feel so clever and renaissance that you can move from subject to subject. And when you return to the subject you're currently failing, you'll feel smarter."

"If you have to memorize something and you have to jam it and cram it and stam it and blam it, you'll have trouble with it. But if you're doing it with enough amount of time, you can relax and do it, because you have to learn it in your body. So if you have to memorize it, read it over just before you go to sleep, go to sleep, wake up, and do it first thing in the morning. You have the pages right next to you. Not only have you rested well and comfortably knowing you're going to attend your work in the morning, but somehow the brain has taken it and worked on it in the night."

He also suggests taking lots of breaks, because the brain is like a "coffee pot: You can't pour in too much water at a time."

Basically, Bill Murray's advice boils down to this: Just chill and enjoy the learning process. Which is actually great advice, given how overstressed and anxious today's students are. And, really, who wouldn't want Bill Murray as a study partner?

The playlist is in conjunction with "New Worlds," an album released in September, in which Murray reads poetry and literature over chamber music led by the cellist Jan Vogler. Murray met Vogler, in typical Bill Murray fashion, on the security line at the airport, when Murray asked Vogler how he was going to lift his cello into the overhead compartment. The two struck up a friendship and now they're in the midst of a North American tour.

Diana Bruk
Diana is a senior editor who writes about sex and relationships, modern dating trends, and health and wellness. Read more
Filed Under
Music • Your Brain
Read This Next
Latest News
Read This Next