20 Doctor-Approved Tips to Get a Full Night's Sleep Tonight

From sleep masks to cutting caffeine, here's how to get a full night's sleep, according to doctors.

Getting a full night's sleep is hardly easy. No matter how many sheep we count or white noise machines we invest in, many of us find ourselves either still wide awake at 2 a.m. or waking up multiple times throughout the night. But have no fear—while getting a full, uninterrupted night's sleep can be hard, it's not impossible. We did our research and talked to the experts to gather the best tricks to add to your nighttime routine to get the rest you truly need. From what you drink (and when you drink it) to what you listen to before bed, here are 20 tips you can use to help you sleep more soundly. Get ready for a full eight hours tonight!

1
Spend 15 minutes in the sun every morning.

If you want to sleep like a champ, start getting your body ready for shut-eye first thing in the morning. According to sleep expert Michael J. Breus, PhD, spending 15 minutes soaking up the sunshine every morning is key to snoozing soundly at night. "It helps regulate the production of melatonin, the sleep hormone," he wrote on his website. "Your internal body clock—the circadian rhythm—runs on a 24-hour schedule and functions best when you're exposed to a regular pattern of light and dark."

While most people think a nightcap helps them wind down at night, that's unfortunately not the case. According to the National Sleep Foundation, alcohol might make you feel tired, but it actually makes it nearly impossible to get a good night's sleep because it interrupts your circadian rhythm, blocks REM sleep, and messes with your breathing, making you more prone to snoring.

It might seem harmless to grab another iced coffee to get through your mid-afternoon slump, but that caffeinated beverage could be wreaking havoc on your sleep. According to the National Sleep Foundation, caffeine stays in your body for much longer than you might think. After six hours, only half of what you've consumed is gone. So if you have a second cup of joe at noon, by the time you're ready to hit the hay, you might still feel pretty wired and get low-quality sleep as a result.

4
And drink mushroom coffee instead!

Why drink regular ol' coffee when you can drink adaptogenic mushroom coffee? According to Breus, antioxidant-packed medicinal mushroom coffee contains half the caffeine you'd get in a regular cup of brew.

So even if you decide to have a cup in the afternoon, it won't ruin your night of sleep like the regular stuff would. In fact, it might actually help. Mushrooms have been found to reduce the effects of stress, so you can rest easy without lying in bed, panicking about an unfinished to-do list.

Have you heard of binaural beats? According to Breus, it's a technique of "combining two slightly different sound frequencies to create the perception of a single new frequency tone." And that leads to changes in your brain, slowing down activity and helping you relax for a better night's sleep.

Sometimes the only thing you need to doze off until morning is cracking open a window. A 2017 study published in the journal Indoor Air analyzed 17 participants over five nights and found that those who had a breeze blowing in their bedroom had lower levels of carbon dioxide in the air, making them sleep better throughout the night.

There's nothing like pitch darkness and total quiet to reset your body and get you back to quality sleep. In a 2017 study published in the journal Current Biology, researchers found that taking a weekend camping trip and sleeping with a natural light-dark cycle—AKA the rising and setting of the sun—shifted the participants' sleep schedules, and that continued even after their trip was over!

8
Invite your pup into your bedroom.

If your dog has turned into your go-to teddy bear at night, that's a good thing. According to a 2017 study published in Mayo Clinic Proceedings, those who slept with dogs in their bedrooms actually got better sleep than those who didn't. And it's not just because they're so warm and cozy, either. Having their furry friends nearby made participants feel safe, making it easier to shut down and relax after a long day. The only problem? Having your dog in bed with you doesn't have the same effect, so get Fido his own spot to sleep, then invite him in for some cuddles in the morning.

9
Give yourself something to look forward to.

If you're not looking forward to tomorrow, how are you going to get a good night's sleep tonight? In a 2017 study published in the journal Sleep Science and Practice, researchers analyzed 825 adults and found that those who lived their lives with meaning were 52 percent less likely to have restless leg syndrome and 63 percent less likely to have sleep apnea. Because they felt good about what the next day would bring, they had a reason to get up in the morning, making them conk out more effectively at night.

Sometimes, you just need to trick your body with some reverse psychology. Instead of lying in bed trying to make yourself fall asleep and ultimately failing, the key to a full night's sleep might actually be trying to stay awake. Yes, this sounds super backwards, but just hear us out. An oft-cited 2003 study published in the journal Behavioural and Cognitive Psychotherapy found that when insomniacs lied in bed with the intention of staying awake, they actually fell asleep quicker and had a more restful night of sleep.

It's all about mindfulness and meditation these days. According to a 2015 study published in JAMA Internal Medicine, those who took a mindfulness meditation class actually had more improvement in their sleep quality than those who tried to learn better sleep techniques.

When exercising in the morning just isn't an option, it's understandable that you'd try to squeeze in a gym session right before bed. Sure, you might get in a solid run, but the Mayo Clinic says exercising later on in the day—particularly within a few hours of bedtime—can affect both your ability to fall asleep and the quality of sleep you get once you do.

You might have heard people raving about how well magnesium helps them sleep, and they're not lying. A 2012 study published in the Journal of Research in Medical Sciences found that when taken before bedtime, the natural sleeping pill of sorts can help improve your quality of sleep, making you fall asleep faster and stay asleep until morning.

Nuts don't just make for a super healthy snack option, they also contain ingredients that will help you get a full night's sleep. In a 2017 study published in the FASEB Journal, researchers found that eating nuts on a regular basis not only gives your body sleep-inducing nutrients like magnesium and selenium, but also makes the brainwave frequencies associated with sleep stronger—all things that can help you snooze like a baby!

As nice as it is to have an eReader on hand, that Kindle could be messing with your sleep schedule. In a 2014 study published in the journal PNAS, researchers found that the devices emitted blue light that leads to more restlessness and less REM sleep, making it harder to fall asleep and lowering your quality of sleep in general. So go for a good old-fashioned printed book instead! It's the same reading material and less damage to your rest.

16
Pick up a pair of blue light-blocking glasses.

But eReaders aren't the only electronic devices that can emit blue light; your phone and TV do too. The good news is, you can prepare your eyes for the damage they can do with some blue light-blocking glasses. In a 2017 study, researchers from the University of Houston College of Optometry found that those who sported blue light-blocking glasses a few hours before bedtime had a 58 percent increase in their melatonin levels, which helped their sleep overall. That means you can still use your digital devices at night without messing with your precious Z's.

17
Sleep with your feet out of the covers.

If you already sleep with one foot hanging off the bed, you're on the right track; that habit can seriously benefit the quality of sleep you get.

As Natalie Dautovich, PhD, spokesperson for the National Sleep Foundation, told The Cut, temperature is a huge factor in getting quality sleep. And keeping your feet out from underneath your warm covers can ensure that your body doesn't get too hot, which can prevent you from getting that much-needed shut-eye. This is especially important since the surface of your feet—which are hairless and contain special heat-beating vascular structures—are designed to help cool down your body.

Having a pre-bedtime snack is tempting, but there's a scientific reason as to why you should avoid food at least two hours before you go to sleep. According to the Cleveland Clinic, the midnight munchies put your body into full-on digestion-mode, which can involve some major discomfort when you lay down. Preparing your body for rest means skipping that late-night snack.

Naps definitely have their perks. They can improve your mood, performance, and memory, but there's a catch: If your mid-day nap stretches for longer than 30 minutes, you'll likely mess up your nightly sleep schedule. According to the Mayo Clinic, napping can make your insomnia and sleep quality worse. To be safe, stick to a quick 10-minute snooze if you're feeling tired during the day. 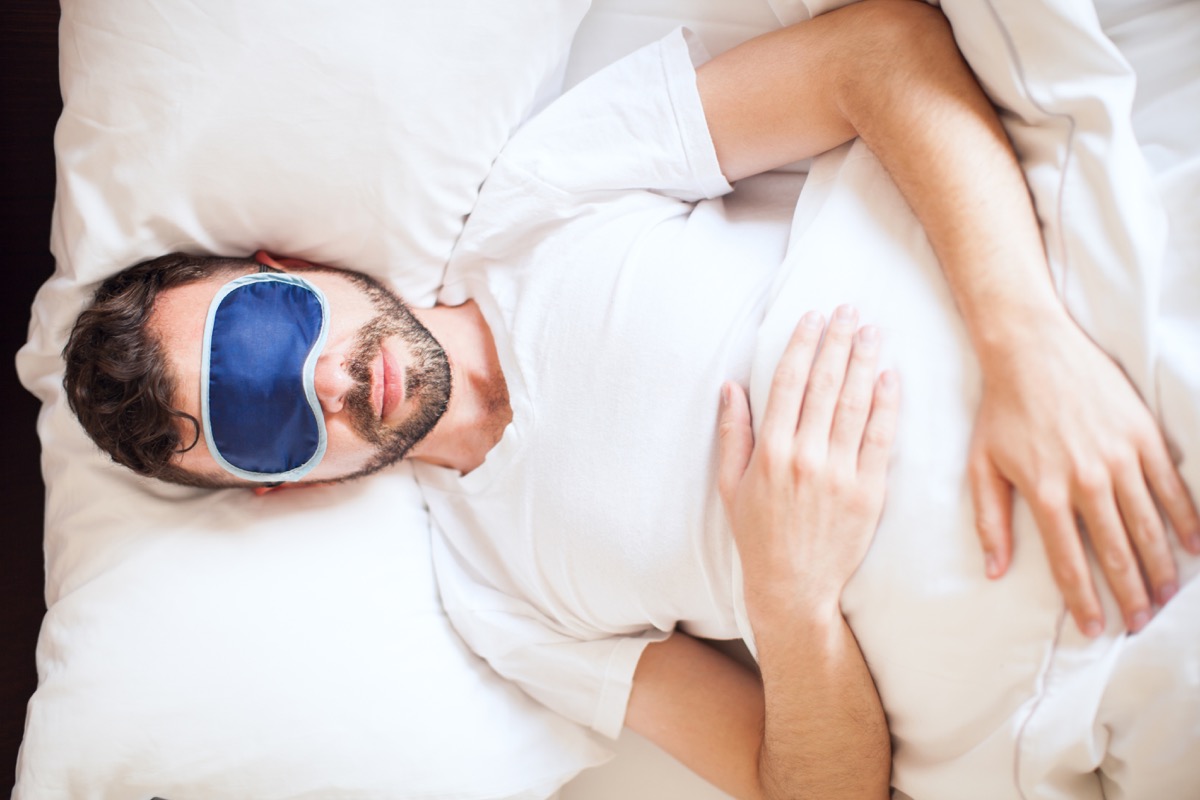 Those sleep masks may seem excessive and indulgent, but they have an important purpose. According to the Cleveland Clinic, if you don't have blackout shades, they can provide a darkness that not only helps you get better sleep throughout the night, but also allows you to function at your best the next day.