This small lifestyle change could make a big difference to your long-term brain health.

About six million Americans are currently living with Alzheimer's disease. In fact, this form of dementia is the sixth leading cause of death in the United States, and the number of cases worldwide is expected to triple to more than 150 million by 2050. But this is not to say that there aren't things we can control, from how we exercise to how we sleep, that can help lessen the chances of such a diagnosis. In fact, new research shows that one minor diet modification could significantly reduce your risk of developing the disease. Read on to learn what it is and how it can help.

RELATED: If You Keep Saying This, It May Be a Sign of Dementia, Experts Say.

Eating a high-fiber meal like oatmeal daily can slash your Alzheimer's risk.

Starting your day with a high-fiber meal such as oatmeal every morning could slash your risk of developing Alzheimer's by more than a quarter, new research shows. Kazumasa Yamagishi, MD, PhD, a lead author of the study out of the University of Tsukuba published in Nutritional Neuroscience, explained that the reason isn't yet fully understood. "The mechanisms are currently unknown but might involve the interactions that take place between the gut and the brain," he wrote.

RELATED: Your Dementia Risk Doubles If You've Had This, New Study Says.

Soluble fiber protects against Alzheimer's, according to the research.

The research, which tracked 3,739 adults for 20 years, found those with fiber-rich diets were less likely to develop dementia. The healthy volunteers ranged in age from 40 to 64, and filled out surveys that assessed their dietary intake between 1985 and 1999. Scientists then followed up through 2020, noting which participants developed dementia that required care.

Those in the study who ate the most fiber had a 26 percent lower dementia risk compared to those participants who ate the least. And the link was most pronounced among those who ate more soluble fiber, which in addition to oats is highly concentrated in peas, beans, lentils, and peanuts.

Dietary fiber is the part of plant-based food that mainly passes through the digestive tract without breaking down or getting digested. Whereas insoluble fiber doesn't dissolve in water, soluble fiber does.

Oats are a helpful tool because they are high in soluble fiber, which protects against degenerative disease, scientists noted in the study. They found that fiber is believed to boost the levels of good bacteria, which dampens inflammation in the brain. "One possibility is that soluble fiber regulates the composition of gut bacteria," Yamagishi said. "This composition may affect neuroinflammation, which plays a role in the onset of dementia."ae0fcc31ae342fd3a1346ebb1f342fcb

RELATED: If You Do This When Getting Dressed, It May Be a Sign of Dementia. 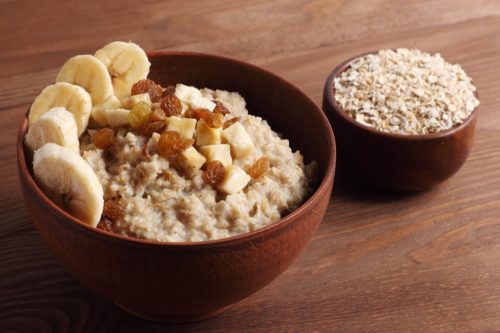 The Japanese researchers noted other well-documented benefits of fiber intake: It also boosts the digestive system and has cardiovascular benefits, including reducing cholesterol.

Research into diet and dementia is ongoing.

"Dementia is a devastating disease that usually requires long-term care," Yamagishi said, noting that dietary fiber may indeed provide preventative benefits, but the research behind it is still at an early stage. "It is important to confirm the association in other populations."

On average, American adults eat 10 to 15 grams of total fiber per day, while the United States Department of Agriculture (USDA) recommends a daily amount of 25 grams for women and 38 grams for me in adults up to age 50, according to Harvard Health Publishing. These metrics reflect a big opportunity most Americans have to pack more fiber into their daily diets.

There's no cure for Alzheimer's, but a high-fiber diet including oatmeal just might be a small lifestyle change that stands to reduce the risk.

RELATED: Drinking This Makes You 3 Times More Likely to Get Dementia, Study Says.