The U.S. Is on the Verge of Its First-Ever Official Shortage of This

The historic event could affect the U.S. West in the coming months.

Of all the things we rely on during our daily lives, water might arguably be the most underappreciated. After all, we need it for everything from showering to staying hydrated and healthy. But now, the most precious resource is running in short supply in some areas, as officials in the U.S. are on the verge of declaring the first-ever water shortage in the history of the federal government, the Associated Press reports. Read on to see if your area is running dry, and for more on other serious shortages, check out These 4 Beloved Foods Are Disappearing From Grocery Shelves, Experts Warn.

Man-made lakes that supply millions of people are expected to shrink in the coming months.

According to a 24-month projection released by the U.S. Bureau of Reclamation this week, water levels in man-made lakes that supply drinking water to millions of people across the western United States are expected to drop significantly. The agency forecasts that less water will make its way down the Colorado River, causing Lake Powell and Lake Mead to shrink below levels that will trigger the agency to declare a shortage.

Several states that rely on the river could be affected

The model released by the Bureau of Reclamation forecasts that Lake Mead will drop to 1,075 feet in June of 2021. This would trigger a shortage declaration based on an agreement between Arizona, California, Colorado, Nevada, New Mexico, Utah, and Wyoming, which are the states that rely on the Colorado River for water.

Even though effects won't be felt immediately, officials will recheck conditions against projections in August to determine whether or not to declare a Level 1 shortage condition. Water usage limitations and cuts would then go into effect for the first time ever in January, AP reports. And for more on H20 issues, check out If You Have This Bottled Water at Home, Stop Drinking It Now, FDA Says.

Some states could see a drastic reduction in their main water and electricity supply. 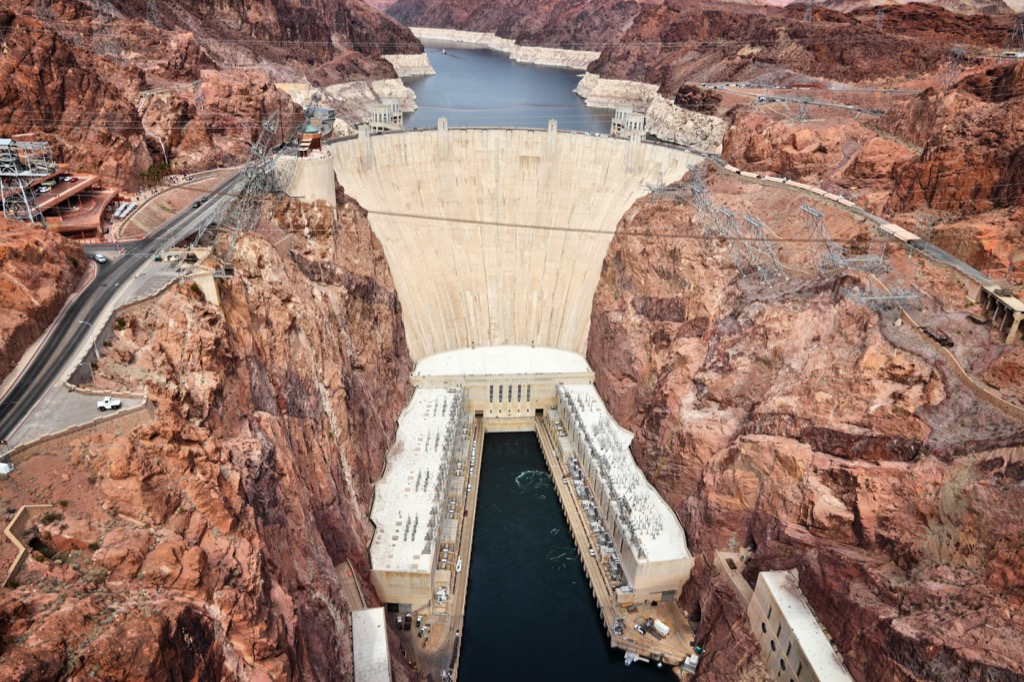 Many local water authorities already have plans in place to help handle any water cuts. But the changes could weigh more heavily on states such as Arizona, which counts on the Colorado River as its main water source and provides 36 percent of its supply.

And it's not only the water supply that could be affected: the hydroelectric power generated by the Hoover Dam could also suffer as a result. "As the elevation declines at the lake, then our ability to produce power declines as well because we have less water pushing on the turbines." Len Schilling, a dam manager with the bureau, told AP.

As a result, the shortfall in electrical output could leave certain areas without the electricity they need. "Rural economies in Arizona and Nevada live and die by the hydropower that is produced at Hoover Dam," Dave Luttrell, Power District General Manager for Lincoln County in Nevada, said. "It might not be a big deal to NV Energy. It might be a decimal point to Los Angeles Department of Water and Power. But for Lincoln County, it adds huge impact."

Climate change has played a role in the dwindling water supply.

Officials point out that elements of climate change have affected the major water source in recent years. Warmer temperatures have caused more water to evaporate from the river, and reduced snowpack caused by a long drought means less water flowing to tributaries replenish the source, AP reports.

"The study, while significant, is not a surprise. It reflects the impacts of the dry and warm conditions across the Colorado River Basin this year, as well as the effects of a prolonged drought that has impacted the Colorado River water supply," officials from the Arizona Department of Water Resources and Central Arizona Project said in a joint statement. And for more environmental updates, If You Live Here, Prepare for a Major Bug Infestation, Expert Warns.