Actor and musician Dame Olivia Newton-John died yesterday at her ranch in Santa Barbara, California after living with breast cancer for 30 years. One of the biggest stars of the '70s, Newton-John's professional persona mirrored the transformation of her iconic Grease character Sandy, evolving from wholesome girl next door to pop vixen with the release of Physical. Yet her contributions to entertainment were just part of the legacy the star left behind upon her death at the age of 73. Having faced cancer three times in as many decades, the star poured her efforts into the Olivia Newton-John Foundation Fund, which raises awareness and resources for plant medicine as a form of cancer treatment.

When launching the foundation in 2020, the actor opened up about her initial 1992 diagnosis, and how her cancer was nearly overlooked due to two false negative tests. Read on to learn how Newton-John finally got her diagnosis after this major oversight, and how it informed her advocacy later in life.

READ THIS NEXT: Cancer Survivor Rita Wilson Says She Stopped Eating This After Her Diagnosis.

Stars have responded to the news of Newton-John's death with an outpouring of love.

Newton-John's husband, John Easterling, shared the news of her passing yesterday in a statement on social media. "Olivia has been a symbol of triumphs and hope for over 30 years sharing her journey with breast cancer," he wrote. Upon the announcement, Hollywood responded with touching tributes to the late star. Barbra Streisand, Dionne Warwick, Kylie Minogue, and Sir Rod Stewart were just a some of the many A-listers who posted heartfelt messages remembering Newton-John.

Perhaps most notably, her Grease co-star John Travolta addressed his message directly to his longtime friend: "My dearest Olivia, you made all of our lives so much better," he shared via Instagram. "Your impact was incredible. I love you so much. We will see you down the road and we will all be together again. Yours from the first moment I saw you and forever!" he said, sweetly signing his message, "Your Danny, your John!"ae0fcc31ae342fd3a1346ebb1f342fcb

READ THIS NEXT: The "Crazy" Way Mark Ruffalo Discovered He Had a Brain Tumor.

Throughout her 30-year cancer battle, she always stayed positive.

Despite being a mega-watt celebrity of her time, Newton-John was known as a "wonderfully unselfconscious star." Her reputation was one of positivity and sincerity—core traits that shaped not only her personal life, but also her strategy for her coping and healing following her diagnoses.

"If you think positive thoughts, you'll create a positive world around yourself and attract positive people to you," the actress told Us Weekly in 2019 following her third breast cancer diagnosis. In 2010, she shared a similar message while speaking with EmpowHer: "Not everybody is as fortunate… I realize that and I am very grateful that I am, but that positive attitude does really help in how you go through the journey."

She became a major advocate for plant medicine. 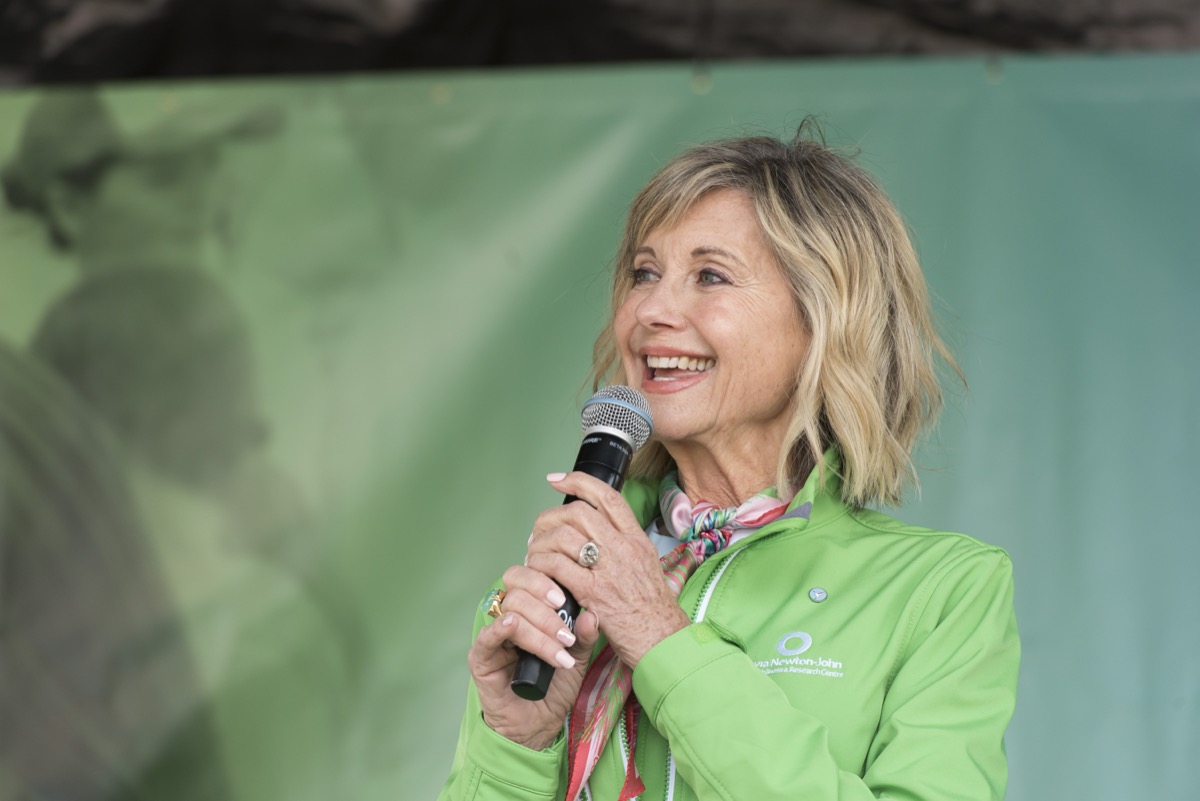 Newton-John was vocal over the years about the role of plant medicine in her cancer treatment and founded the Olivia Newton-John Foundation Fund in partnership with her husband, a natural-health advocate and co-founder of the Amazon Herb Company. She became an advocate for medicinal cannabis, describing it as a "healing plant" and "something that should be available to everyone who is going through a chronic illness or pain," the Daily Mail reports.

Asked for an update on her condition in 2021, the singer told Us Magazine: "I feel really well, thank you. Thanks to my husband and his plant medicine. I'm doing really well." She added, "Plant medicine has been incredibly healing for me, but I think it's just keeping a positive attitude and believing that I will be OK… is probably the most important part."

In a 2020 interview for the launch of her foundation (via Prevention), Newton-John shared that her cancer nearly went undetected following her initial screening. "I knew immediately that something was wrong. I had a mammogram and the mammogram was benign and then I had a needle biopsy that was also benign," the Physical singer recalled. "And I don't say this to scare women, but you just have to trust your instincts," she said.

Upon receiving her results, she decided to pursue further testing, including a surgical biopsy—a more invasive procedure in which the doctor makes an incision and removes tissue from the area in question, rather than just cells. This revealed cancer in her right breast, which would require the star to undergo a mastectomy and nine months of chemotherapy. "All of this was overwhelming," the Grease star said. "It was a feeling of dread and terror of the unknown."

Ultimately, she used her own harrowing diagnoses to help "find a world beyond cancer" for others, she shared via the foundation's website. "The whole experience has given me much understanding and compassion, so much so that I wanted to help others going through the same journey."