These colonial institutions provide an educational look into our nation's past.

Though you may not realize it, America is home to some of the oldest universities in the entire world. While these institutions may not have the ancient context of higher learning establishments like the University of Bologna, which dates back to 859 A.D., or the University of Oxford, which came about in 1096, these colonial hallmarks provide a look back into our nation's past that speaks of our values.

Universities like Harvard University and St. John's College have taken unique approaches to education that have set the groundwork for the creation of hundreds of other establishments across the nation that focus on achievement in all areas of life—from community engagement to earth-shifting medical research and everything in between. For a look inside of our nation's educational past, follow along as we guide you through a tour of the oldest universities in America. 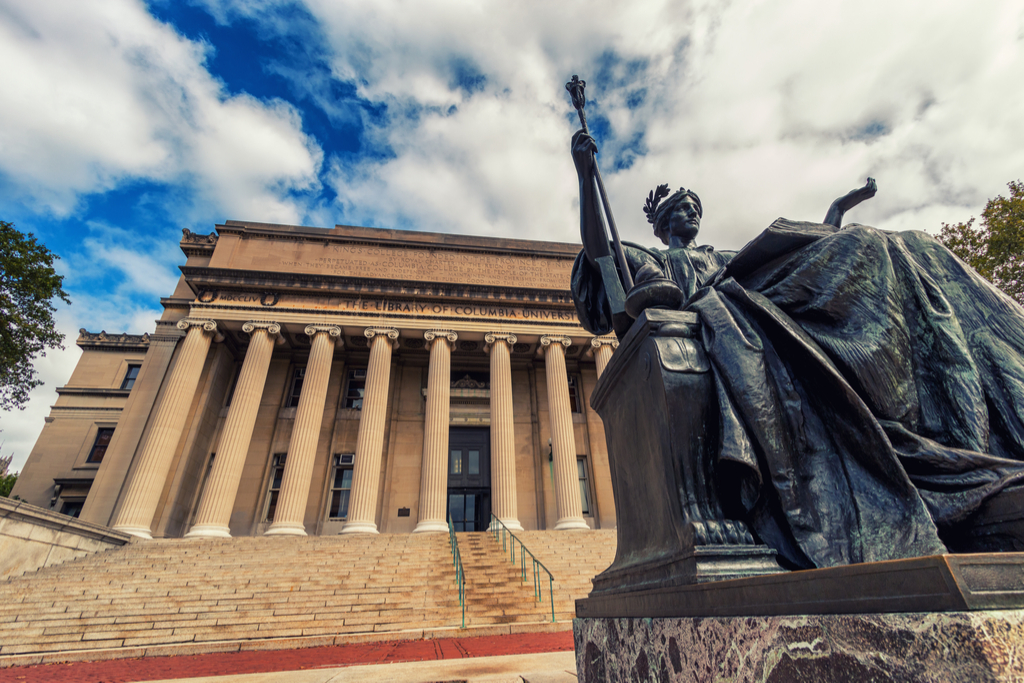 Ivy League member Columbia University, located in uptown Manhattan, was established by a royal charter of King George I of England in 1754. It was the first university to grant the M.D. degree and is, to date, the institution that administers the annual Pulitzer Prize for landmark achievements in journalism, literature, and music. The university is divided into 20 schools, providing undergraduate and graduate programs in everything from applied mathematics to urban development. 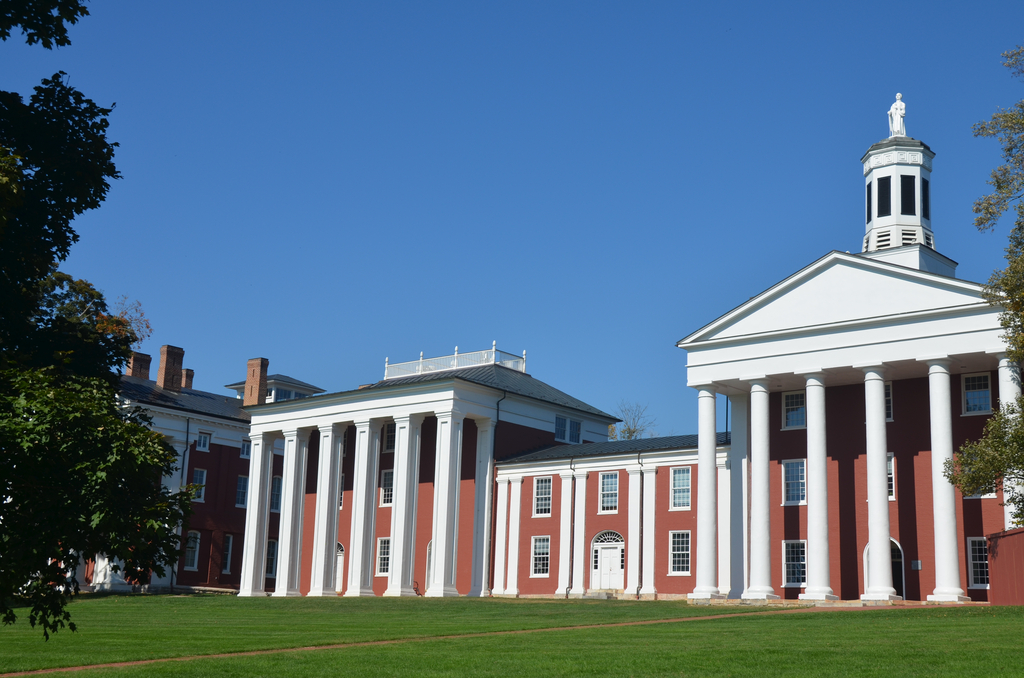 Washington and Lee University is a private liberal arts institution tucked away in the Appalachian Mountains in Lexington, Virginia.

The university was first founded as a small classical school in 1749 named Augusta Academy, and then eventually was renamed to honor the first president of the United States, George Washington, and Robert E. Lee, who was president of the university shortly after his surrender to Ulysses S. Grant during the Civil War.

The university plays home to many iconic traditions, including the Fancy Dress Ball, which dates back to 1907. In total, the school consists of 40 undergraduate programs, and offers professional degrees by the Williams School of Commerce, Economics and Politics, and the School of Law. 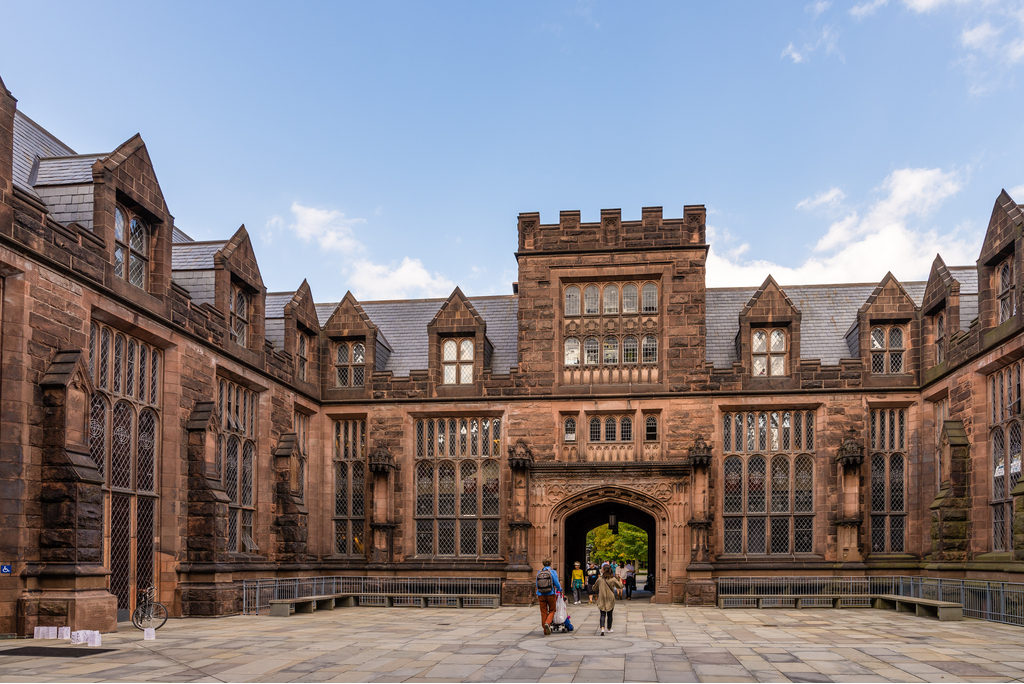 This private Ivy League research university in Princeton, New Jersey, was founded in 1746 by New Light Presbyterians, in order to train ministers, and soon became the educational and religious capital of Scottish Presbyterian America.

Princeton University offers graduate and undergraduate degrees in the humanities, social sciences, natural sciences, engineering, as well as several other professional degrees through programs like the Woodrow Wilson School of Public and International Affairs, and Bendheim Center for Finance. At one point before his presidency, which began in 1902, Woodrow Wilson served as the president of the university, who ultimately introduced the preceptorial system, or the one-on-one form of mentorship programs we now see at universities all across the country.

Serving as the state of Delaware's largest (and oldest) university, the University of Delaware offers more than 135 undergraduate degrees, 67 doctoral programs, 142 master's degree programs, 14 dual degrees, 15 interdisciplinary programs, 12 online programs, and 28 certificate programs. Though the school has changed its name many times over the years, it was first called "Free School," founded by Presbyterian minister Francis Alison. At an acceptance rate of nearly 66 percent (for in-state applicants), the University of Delaware is an incredibly popular and practical option for many students. Former alumni include Joe Biden and Chris Christie. 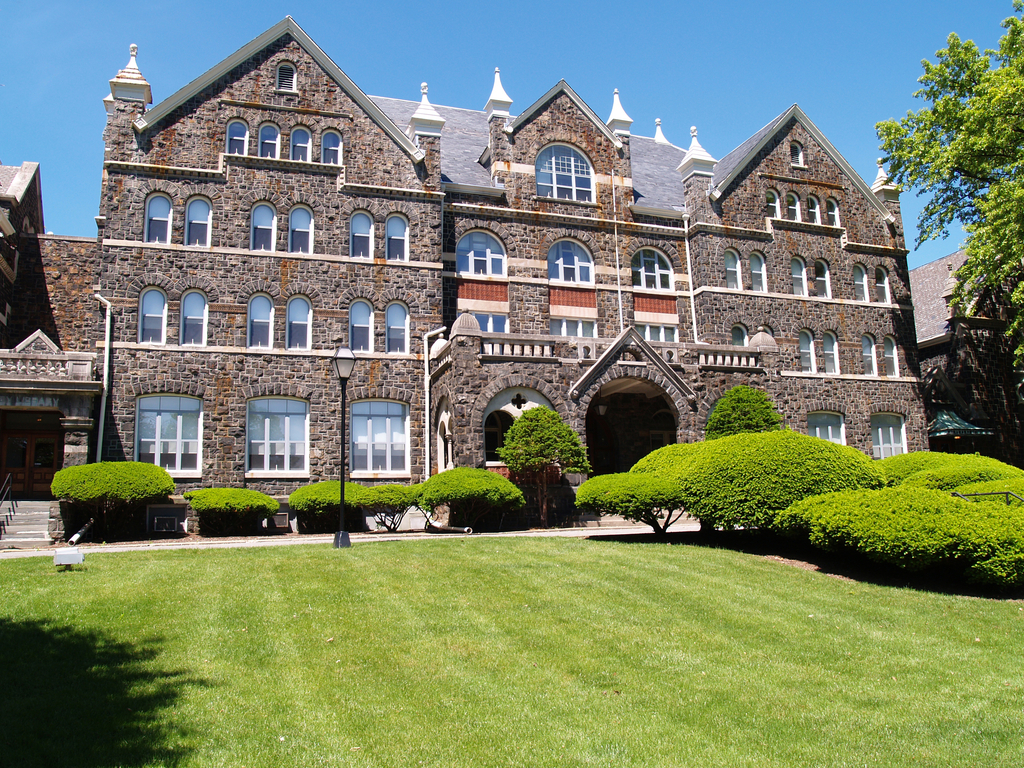 Moravian College is a private liberal arts institution in Bethlehem, Pennsylvania, founded by Moravians—or descendants of followers of the Bohemian Reformation. Most notably, Moravian College was the first institution of higher learning educate Native Americans in their own native language and the first to educate women.

The college can trace its roots back to the first boarding school for young women, the Bethlehem Female Seminary, which was founded in 1742. In 1913, the seminary became the Moravian Seminary and College for Women—the first women's college in the country. Of the 100 students enrolled in the school's graduate divinity programs, around 14 different denominations are represented at all times, including Quaker, Mennonite, Unitarian Universalist, and African Methodist Episcopal. Besides the religious programs, students can choose a wide variety of majors—from music to medicine.

Located in West Philadephia, Pennsylvania, the University of Pennsylvania was founded by Benjamin Franklin in 1740, who wished for the school to focus on more practical education for commerce and public service, while also enriching the mind with lessons in theology and literature. Though his proposed form of education was never implemented, the University of Pennsylvania does still put an emphasis on theology and the classics. The school houses many undergraduate and graduate programs, including the Fels Institute of Government and the Perelman School of Medicine. Notable previous students include poet Ezra Pound, president Donald Trump, and finance guru Warren Buffet. 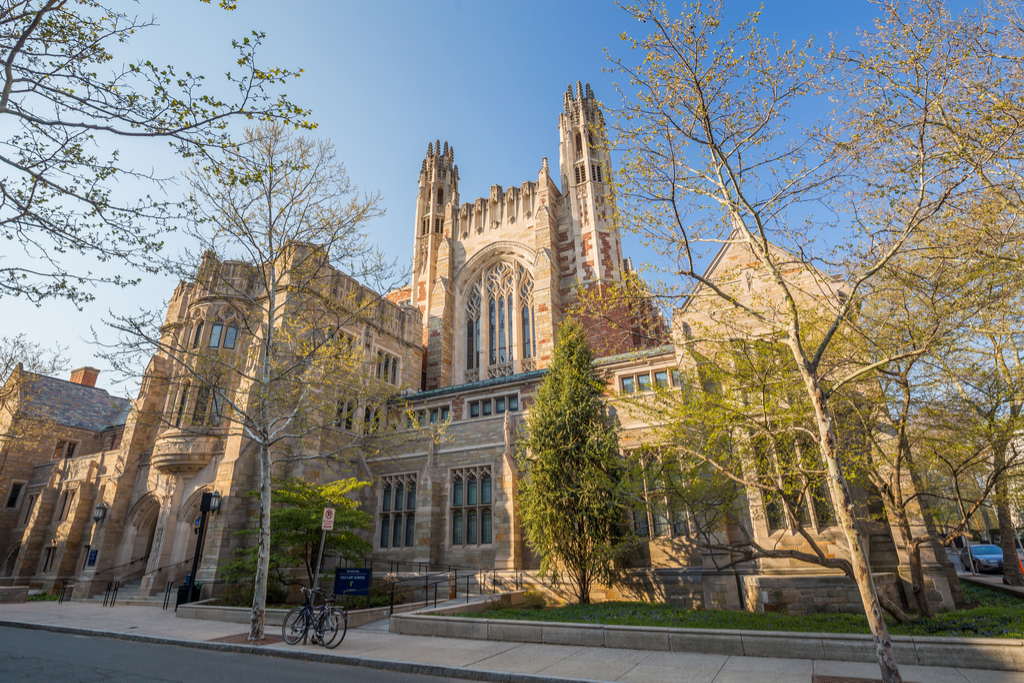 Home of the Bulldogs and Harvard University's prime rival, Yale University was founded in 1701 and originally established to educate Congregational ministers. That said, the college was originally dedicated to theology and sacred languages until after the American Revolution, when it began to incorporate the humanities and sciences into the curriculum.

Located in New Haven, Connecticut, Yale University has 12 professional schools (including a top-notch law program that consistently ranks in the top three nationally, per the American Bar Association), an undergraduate program, and the Yale Graduate School of Arts and Sciences. Yale's undergraduate admission is one of the most selective in the country, with last year's acceptance rate hovering at 6.3 percent.

Formerly known as King William's School, St. John's College received a charter under its present name in 1784. In 1964, the Annapolis, Maryland–based school opened another campus in Santa Fe, New Mexico, as a response to the high numbers of qualified applicants. The college only offers one bachelor's degree in liberal arts, and one master's program available at the Annapolis campus in liberal arts as well. For those seeking the other master's program, Master of Arts in Eastern Classics, they'll have to attend the Santa Fe campus. Perhaps the most unique thing about the college is the absence of grades—while grades are given on a regular scale, the only time you'll see them is if you ask directly. There will also be no use of modern textbooks or lectures, as St. John's College only believes in using a series of manuals for higher learning.

2
The College of William and Mary (established 1693) 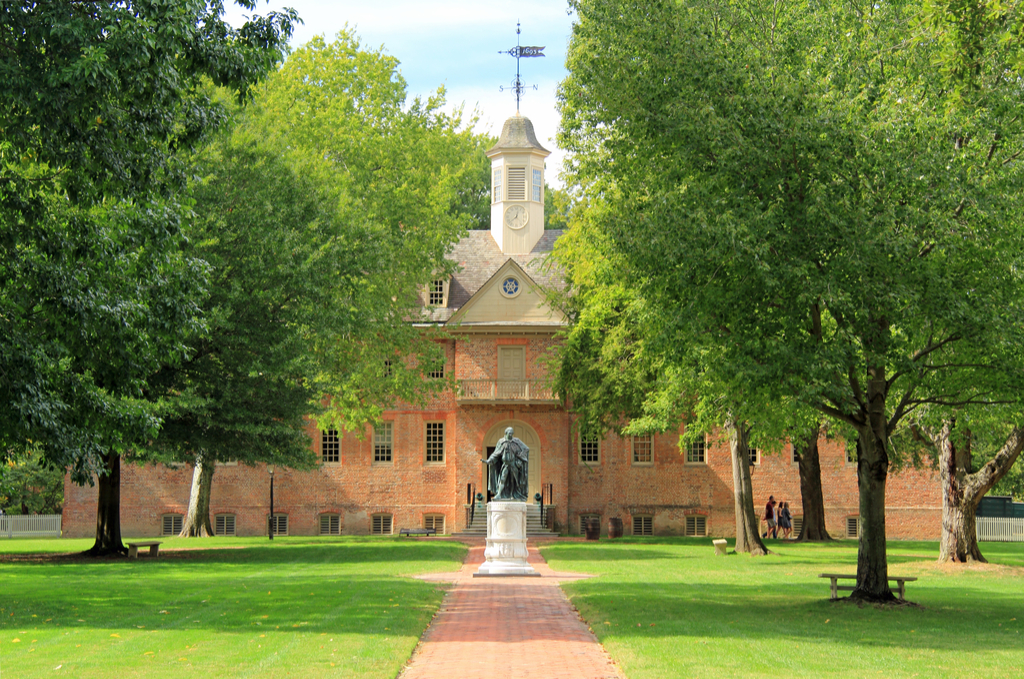 This public research university in Williamsburg, Virginia, was founded in 1693 by King William III and Queen Mary II under a royal charter. During the first century of its existence, the College of William and Mary was a meeting place for lawyers and those interested in the law profession. Now, the school offers four professional programs—law, business, education, and marine science. Among many other notable figures, the university has taught the likes of George Washington, Jon Stewart, and James Comey.ae0fcc31ae342fd3a1346ebb1f342fcb

Founded by clergyman John Harvard in 1636, Harvard University is the oldest institution of higher learning in the United States, and because of its influence and wealth, one of the most prestigious as well. Harvard University is located in Cambridge, Massachusetts, and is one of the foremost research universities in the country, housing the immense Harvard Library, which is the largest academic library in the world with 79 individual libraries holding over 18 million volumes. Unsurprisingly, the university is the alma mater to many notable figures, including Theodore Roosevelt, John F. Kennedy, Jill Abramson, Bill Gates, Natalie Portman, Mark Zuckerberg, and Barack Obama.

Ashley Moor
Ashley hails from Dayton, Ohio, and has more than six years of experience in print and digital media. Read more
Filed Under
School
Read This Next
Latest News
Read This Next