There's no denying the central place cars occupy in our culture and our imaginations. The auto industry in the early 20th century was the Silicon Valley of its day—the engine of America's economic growth and overwhelming power—and it attracted the best and brightest. It fueled the astonishingly rapid development of great American cities with ambitious, optimistic architecture and stately boulevards. The Machine Age skyscrapers of New York, Chicago, and Detroit, are testaments to human progress and freedom, all embodied in the automobile.

So if the shiny, bright objects don't get you at hello, think of car museums as civics lessons. They're great ways to spend relaxing downtime on a business trip. Or, as a family destination, it can be a surprisingly clever choice given all the interesting events and activities on offer. The landscape is dotted with dozens of fascinating private and public collections. We've listed our top public spots (and there are many others), but if hardcore is how you roll, make arrangements with collections like Jay Leno's (amazing) Garage, accessible by appointment only. And for an off-site business conference, consider places like the General Motors Heritage Center in suburban Detroit, an inspiring, unexpected pleasure. And if visiting these museums leaves you feeling so inspired, here are 5 Tips for Starting a Car Collection. 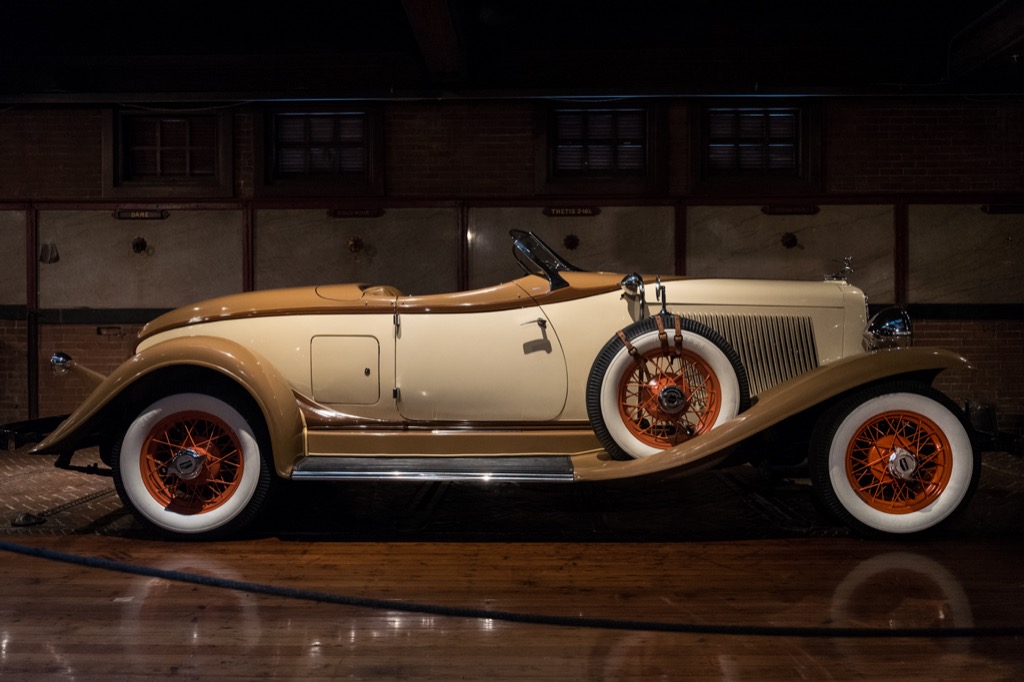 During the first half of the twentieth century, Indiana was second only to Detroit in automobile manufacturing. The home of America's most prestigious auto race, the Indianapolis 500 (approaching the finish line on its 102nd year), Indiana has been host to 79 different car companies, including Stutz, Auburn, Cord (the short-lived, fabulous Boattail Speedster), and Duesenberg, all top choices for 1930s Hollywood glitterati. Housed in the original Auburn factory and administrative building, a National Historic Landmark, The A/C/D Museum currently has more than 120 cars on three levels, and nine automotive themed galleries on subjects like Indiana-built cars, racing, engineering, and more. And car lovers, here are The Best New Cars for 2018. 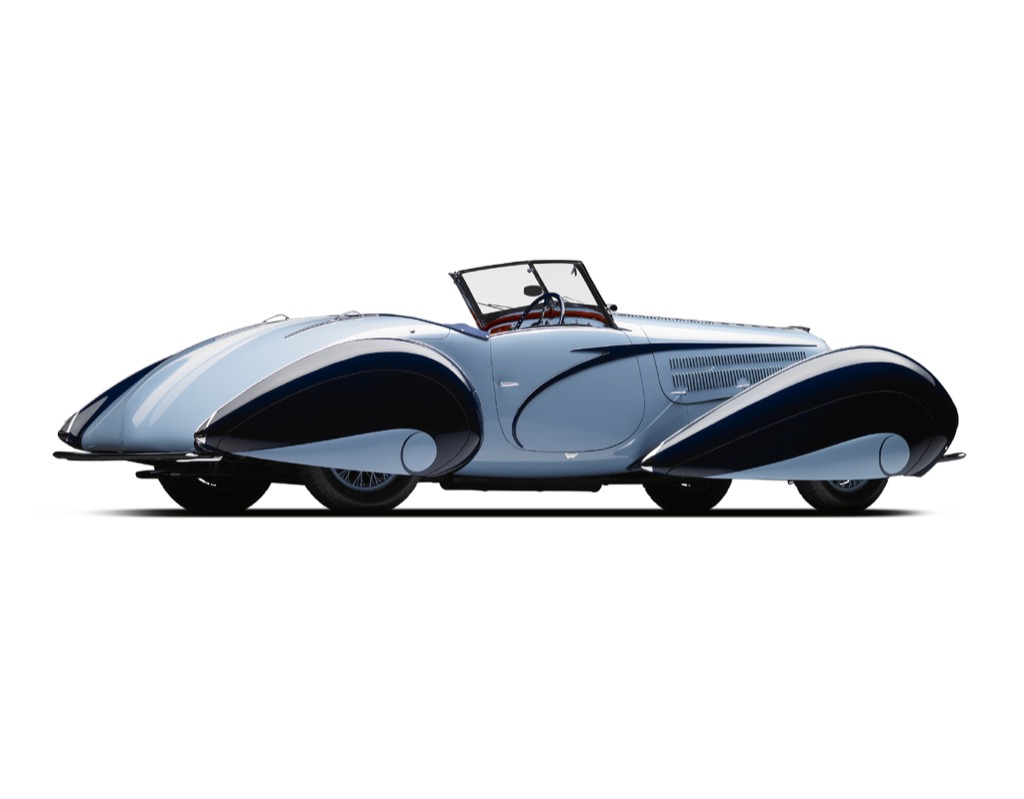 A celebration of the automobiles' starring role in Art Deco and the Machine Age of the 1920s and '30s, with an emphasis on masterpieces by premier French marques Bugatti, Delages, Delahaye, Hispano-Suiza, Talbot-Lagos, and Voison. In addition, the car museum features galleries that draw the connection from automobiles to the arts, furniture design, and architecture of the period. Speaking of old cars, here are The 4 Keys to Buying a Classic Car. 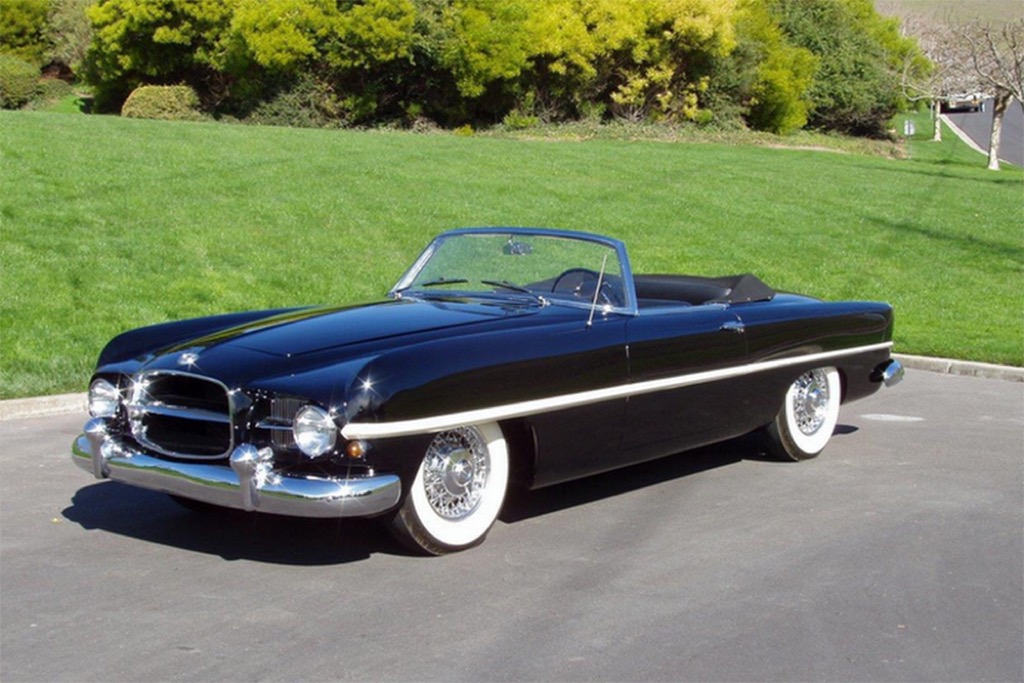 An eclectic collection of American and European classics spanning the 20th century. Among many amazing specimens are vintage Packard, Cadillac, Rolls-Royce, BMW, and Alfa-Romeo. Plus one-of-a-kind Chrysler concept cars like a 1955 Dodge Firebomb, a fine example of the Detroit firm's progressive collaboration with Italian coachbuilder and styling house Ghia in the early 1950s. Now, to pivot to some more modern luxury cars, here are 10 Prestige Sedans That Show Who's Boss. 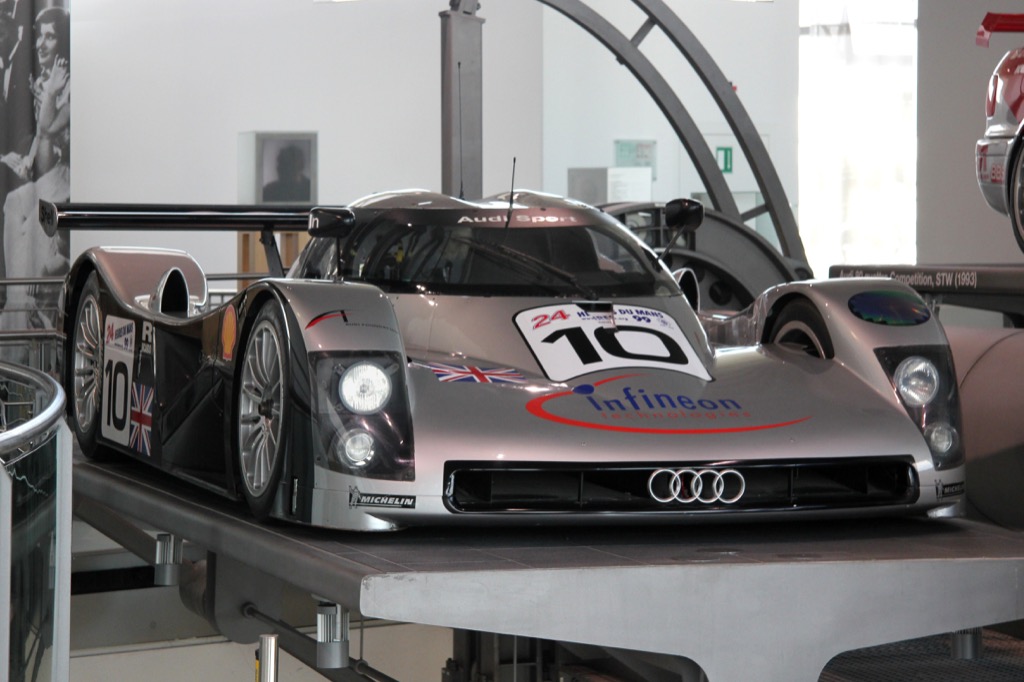 At the Audi Forum, in the Bavarian town of Ingolstadt, the German carmaker's heritage museum shares home base with its manufacturing, design, and engineering centers. The brand's history is long and storied, its origins dating to the 1930s with the merging of four separate companies—Audi, Horch, Wanderer, and DKW, formed Auto Union, which comprise the four rings of the brand known today. Before the second world war, Audi was a force in international motor racing, a status it claimed once more with its dominance of the LeMans 24-hour endurance race in recent years, compiling an unprecedented 13 wins. With such rich history to draw from, the permanent and rotating exhibits—informative and beautifully presented—are worth a side trip when in Europe.

The building alone is part of the occasion. According to Audi, the architecture "follows the principle of growth rings on a tree, symbolically uniting perpetuity and change… Embedding the exhibits within the underlying economic and social conditions makes the Museum Mobile much more than a purely technical museum: A visit also becomes a fascinating review of the 20th century with its momentous changes." Well stated. While in Deutschland, the Mercedes and Porsche Museums, both in the southwestern city of Stuttgart, are also first-rate, with architecture as interesting as what they contain. Ditto for Volkswagen's Autostadt in Wolfsburg, and the BMW Museum in Munich.

It may be worth purchasing a new Corvette just for the opportunity to take factory delivery where you can help build its engine, side by side with a master. Afterward, tour the entire plant to witness every stage of assembly* and then amble over to the museum for 64 years of Corvette history and lore in the flesh, set in period-perfect dioramas. It's not as corny as it sounds, placing each generation of 'Vette in the cultural context of the time. Geek out on Americana and marvel at the beautiful, highly-detailed displays surrounding a collection of cars that lined the bedroom walls of many a teenager. The nearby Motorsports Park offers Hot Laps, track outtings with pro drivers in your car, or one provided by them. Another reason to buy a corvette? We named it The Single Best Car You Can Buy for Under $100,000.

Plan to spend $100 for two laps around the full course. To just visit museum when in town, hours are 8 to 5, 7 days, closed holidays.

350 Corvette Drive, Bowling Green, Kentucky. Admission is $10, $8 for seniors, kids are only 5 bucks, and military is free. (*Note: Factory tours are suspended until January 2019, so plan accordingly)

Also known as The Harrah Collection for the approximately 1,450 historic cars owned by late casino impresario William F. Harrah. Upon his death, his hotels and casinos were acquired by Holiday Inn with the intention of selling off the entire collection. A non-profit organization came to the rescue, ultimately saving some, but sadly not all of his precious cars, and building the museum that contains over 200 of Bill's babies. Spread over four galleries depicting the major epochs of automotive history, it features celebrity wheels including Elvis' 1973 Eldorado, Frank Sinatra's Ghia (one of several esoteric Ghia-Chrysler projects of the 1950s-early 60s. Only 25 were built), and JFK's Lincoln Continental. The collection includes the usual vintage show-stoppers Bugatti, Cord, Pierce-Arrow, and Mercedes, with one-offs like a gold-plated DeLorean and the only surviving prototype of Buckminster Fuller's Dymaxion project. The museum offers a wide-range of classes and symposiums, plus numerous special events. Car lovers, you should also check out these 20 Insanely Fast Cars You'll Find in A-Listers Garages.

Open daily except Thanksgiving and Christmas. Monday through Saturday 9:30 to 5, 10-4 Sundays. Tix are twelve bucks, seniors $10, kids $6. Plan your trip at automuseum.org. 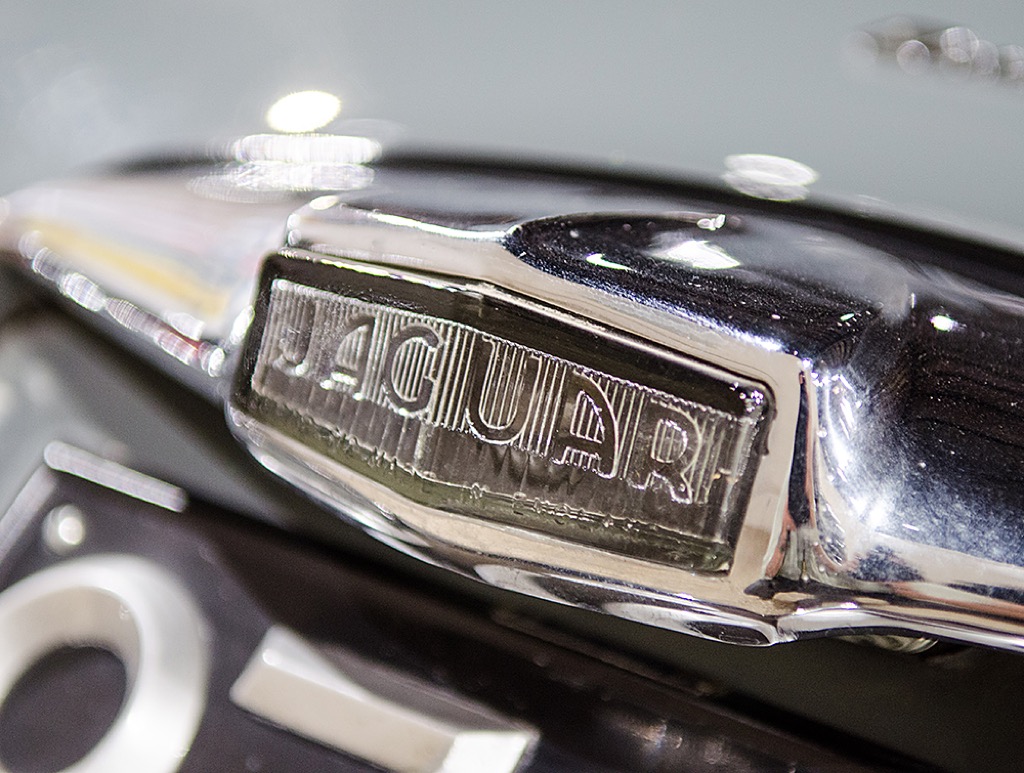 Founded by Land Speed Record holder Richard Noble OBE (Order of the British Empire) from a humble thirty-car collection in 1985, the Haynes houses nearly 400 cars and motorcycles from all periods, including a significant number of modern supercars. British marques are well-represented, as well as American and European, plus an exceptionally clean Russian GAZ M13 Chaika, the Soviet's answer to Packard and car of choice for stylin' apparatchiks of the Khrushchev era. Overall, this is one of the car museums that contains an exceptional collection of cars that would otherwise be lost to the dustbin of history. That, and special exhibits for motor racing, customs, motorcycles, and the Test Circuit, where the cars and bikes come alive in real time. On-site restoration experts toil away on barn finds destined for the museum floor—or a lucky owner's personal collection. Next, check out these 10 Automotive Droptop Wonders.

The Haynes, a short drive southwest of London, is open every day except three days at Christmas and New Year's Day. Tickets start at £14.50. For directions and more information: haynesmotormuseum.com.

Robert Petersen, car aficionado and former publisher of leading automobile magazines, founded his legacy museum in 1994 with his personal collection. A stunning renovation by his eponymous foundation in 2015 transformed a low-profile institution into one of L.A.'s top destinations and car museums, an enlightening and educational plum in the heart of America's cultural mecca. Naturally, cars with Hollywood heritage feature prominently, including a vintage Jaguar XKSS (owned by Steve McQueen), a De Tomaso Pantera (Elvis), and the Pontiac Aztek from Breaking Bad. Over one-hundred cars and bikes are displayed in 25 galleries, with another hundred or so in a basement vault (accessible by special arrangement). An entire floor is devoted to Southern California car culture. Special exhibits throughout celebrate quintessentially American motorcycles, hot rods and custom cars, though Europe's finest are also well-represented, with 70 Years of Ferrari currently on display. Also be sure and check out these 10 Drool-Worthy New-High Performance Trucks. 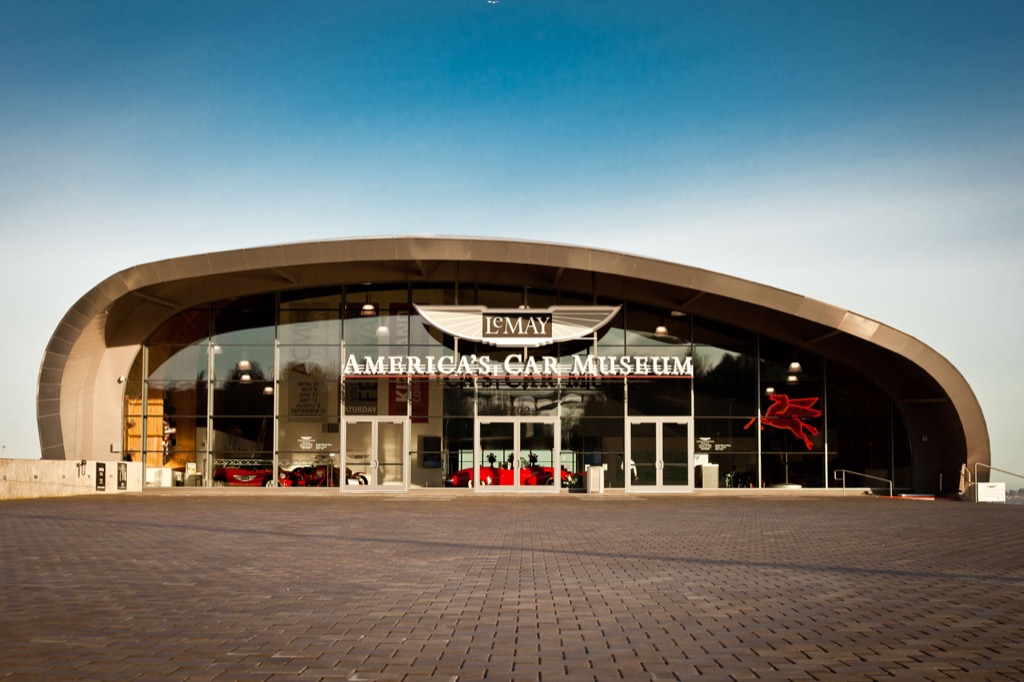 At the time of his passing, Harold LeMay, an American success story who built his fortune in the trash-hauling business, had amassed the largest privately owned stockpile of cars in the world, the LeMay Family Collection. Consisting in excess of 3,000 cars, trucks, and motorcycles, with acres of related ephemera, it made the Guinness Book of World Records and is unlikely to be surpassed, perhaps ever. Hundreds of Harold's objects of affection are on display at the family-friendly LeMay Museum in the Pacific Northwest. Its annual Summer Ender Fender Bender cruise-in invites car and bike enthusiasts to show off their rides outside the museum for a huge, beer-soaked bash, not unlike Detroit's massively popular, week-long Dream Cruise every August. With displays rotating constantly, you're not likely to see the same cars on subsequent visits. The impressive new America's Museum, a national treasure, includes restoration shops, lecture halls, galleries, and a banquet room. Also, be sure you take a look at The Ten Hottest SUVs Burning up the Road Right Now. 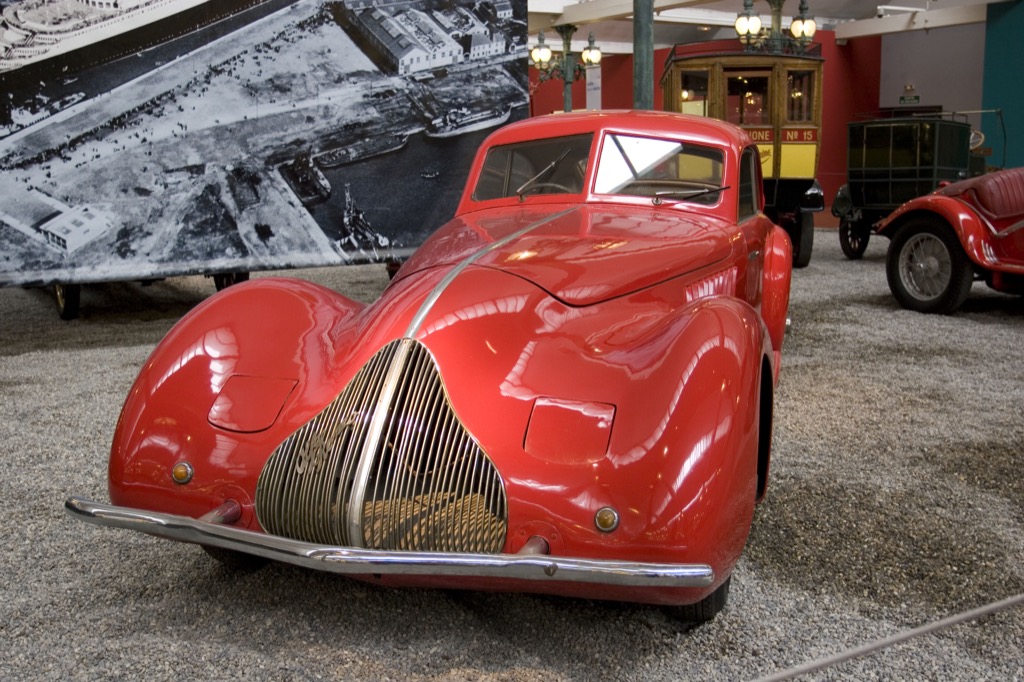 France, by 1870, along with neighboring Germany, had deemed horses passé. Relentlessly focused, they were, on the wacky notion of personalized self-propulsion. Like a train for one. Or four. That persistence—and vision—gave rise to motorized vehicles in every form imaginable, leading inevitably to the automobile as we know it. (And you thought electric cars and bicycles were new tech? Arriviste!) As a center of automotive innovation (it's true, even though as Americans, we see little evidence of that here), it follows that France is home to one of the most kick-ass car museums. Located in the city of Mulhouse, near the border with Germany, the Schlumpf Collection of classic cars orbits around classic Bugatti, some of the most exquistely engineered automobiles ever. The self-proclaimed World's Largest Automobile Collection contains more than 520 magnificent vehicles, including the world's greatest concentration of the Brothers Schlumpf ultimate fave Bugatti, with 123 pristine specimens on display. If that weren't enough, you can watch films, enjoy a robot building a modern Peugeot, or experience the first-of-its-kind Autodrome, a new outdoor exhibition track where classics old and new can be appreciated in motion and in natural light.

15 Rue de l'épée 68 100 Mulhouse. Rates for the grand tour and the track are 16 euros, 13 for the indoor exhibits only. Hours vary according to season, so plan your visit and learn more at www.citedelautomobile.com