The 10 Greatest Alfa Romeos of All Time

The company that would in 1915 become Alfa Romeo was formed 9 years earlier by French auto magnate Alexandre Darracq. That boils down to a 110-year history of innovative automotive design, during which Alfa Romeo gave the world some seriously cool cars, including an embarrassment of mid-century icons. Below we've zeroed in on the very coolest Alfas from the 1950s and 1960s.

This car was so disco it was called disco more than two decades before the advent of disco! It was created after U.S. distributors requested an Alfa barchetta sports racer. Well, they got one. The design was quite uncommon for the time, with its rounded fenders, low-slung profile and convex tail. This sexy, feline look would two years later be echoed in the Jaguar D-type. Powering every variant of the Disco Volante was a revised version of the four-cylinder engine found in the Alfa Romeo 1900, constructed with a light alloy instead of iron.

This hot little number was designed by Franco Scaglione for Bertone in the early 1950s. Like the Disco Volante before it, the 2000 Sportiva featured a tubular space-frame chassis covered by an all-aluminium body, and it packed a hot version of the DOHC engine sourced from Alfa's immediate post-war family saloon, the 1900. It was essentially a concept car. Only four were made — two coupés and two spiders.

In Marcello Minerbi's book Alfa Romeo-Zagato SZ TZ, Giuseppe Busso talks about how the 750 Competizione came about: "This concept first developed through collaboration between Alfa Romeo and Abarth-Boano on a box-type sheet metal chassis conceived by Abarth. The car was built as a roadster and tested, but due to technical problems which came to light during the tests, Alfa gradually lost interest in it." Does that make it any less cool? Hell no! It was a very cool problem child, that happened to be powered by a long stroke Inline-4 that wasn't too far off Alfa's pre-war designs.

Without a doubt, the Giulietta Sprint Zagato is one of the most desirable Alfa Romeos ever made. Because of its small size (it weighed just 770kg) and aluminum bodywork, the SZ was significantly faster than its steel-bodied production counterparts. The 1.3-litre engine pushed the SZ to a top speed of 120mph. It ought to come as no great shockthat the SZ was very successful in racing. Indeed, it helped Alfa Romeo secure a victory in the 1.3 litre class of the FIA Sportscar Championship in 1962 and 1963.

Regarded as one of the most proportionally correct Alfas ever made, the 2600 Pininfarina Speciale was first bodied as a spider "prototipo 621," and later as a coupe.

First conceived in 1959, the Tubolare Zagato (TZ) was intended to replace the SZ using most of the Giulia series assemblies, but with a radical tubular space frame chassis and lightweight Zagato body. These advanced features made the TZ much more at home on the track than the the standard Giulia. Zagatos lightweight aluminum bodies were ideally suited for the TZ's advanced chassis. Advances in aerodynamics led the inclusion of a Kamm Tail which helped increased stability without introducing drag.

These cars were named GTA instead of GT, the 'A' standing for "Alleggerita", Italian for lightweight. It was the lightweight nature of the GTA, which included aluminium body parts and lightweight magnesium wheels is what really made this car a force to be reckoned with on the track. Race versions produced just under 170bhp. In its opening race at Monza in 1966, GTAs occupied the first seven places, with driver Andrea De Adamich claiming the title that season in his GTA.

Manufactured for three years, the Duetto's rakish styling remained in vogue for decades, and revamped forms of the car were produced through the 1990s. Yes, this car is trying to seduce you. The cheeky, sexy demeanor of the Duetto made it the chosen ride of Dustin Hoffman's character Ben Braddock in the iconic 1967 movie The Graduate. 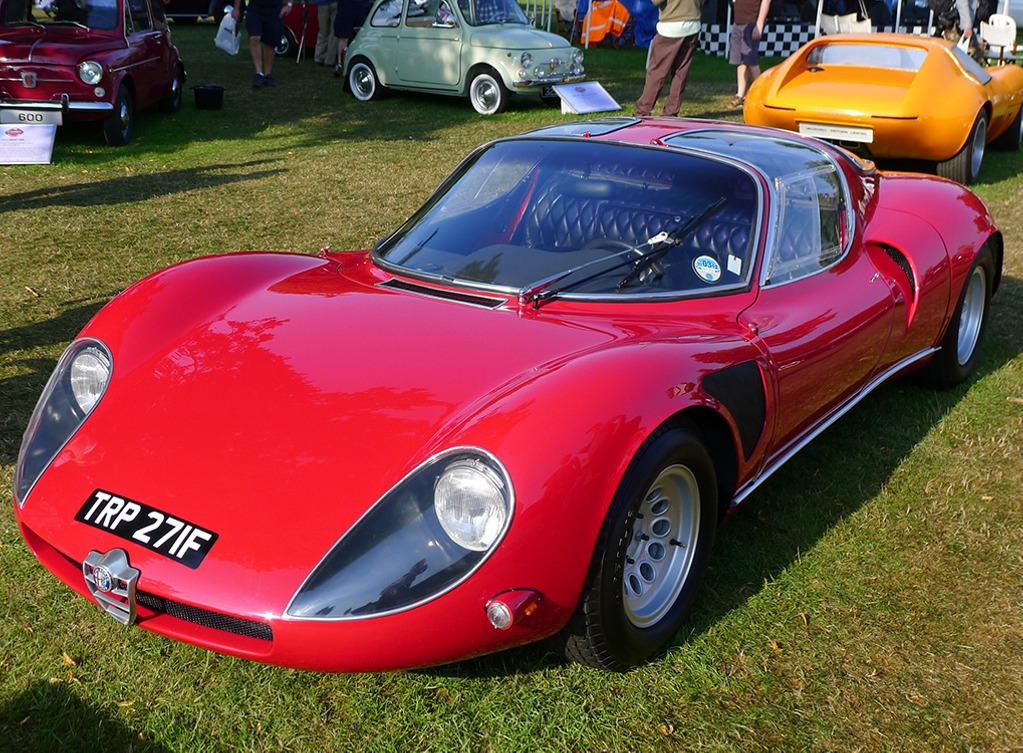 "Stradale" (Italian for "road-going") is a term often used by Italian car manufacturers to indicate a street-legal version of a racing car; indeed the 33 Stradale was derived from the Tipo 33 sports prototype. This prototype streamlined coupe, designed by Franco Scaglione, sits very low on the road, being less than a meter in high. In 1968 it was the fastest commercially available car in the standing kilometer with time of 24.0 seconds measured by German Auto, Motor und Sport magazine. Only 18 examples were ever produced.

The T33/2 had substantially different bodywork from previous racing models and was available in both short and long tail configurations. All the short tail cars were referred to as 'Daytona' in either coupe or spyder form. For Le Mans, Alfa Romeo fitted new long-tail bodywork with small fins near the trailing edge. The intention was to boost overall top speed to 300 kph thereby giving Alfa Romeo a fighting chance of beating much larger competition such as the GT40. The factory cars placed 4th, 5th and 6th overall and won the 2-liter class.