20 U.S. Government Secrets They Don't Want You to Know

There are secret bunkers literally everywhere.

Fact: there's definitely a lot our government isn't telling us. We're not talking about conspiracy theories, like who really shot JFK or that Area 51 is really populated by little green men. We mean the government secrets hiding in plain sight, some of which we've found out about, and some of which are still mysterious. Speaking of Area 51—whatever is going on there the government is still weirdly secretive about. As that old saying goes, if you're not a little bit paranoid, you're not paying attention. Here are the government secrets the U.S. has tried to keep from its citizens, and what we do (and don't) know about them so far. Could drugs and hypnosis be used to control people's minds and turn them into unwitting assassins for the CIA? That's what the agency attempted to discover in the 50s, with a top-secret research program called Project MK-ULTRA. Turns out, LSD just makes people want to listen to 45 minute guitar solos.

2
The U.S. Government Had a Plot to Kill Castro (with a Seashell)

There were a lot of crazy attempts to assassinate Cuban dictator Fidel Castro during the 70s, from booby-trapped cigars to poison milkshakes, but none quite so nutty as the exploding seashell. The CIA knew that Castro was a big fan of scuba-diving, so they plotted to plant a brightly colored conch shell in one of his favorite dive spots, triggered to explode when he touched it. They never followed through on it, although the CIA director did purchase two books on Caribbean mollusks. And for more great trivia, check out the 28 most enduring myths in American history. 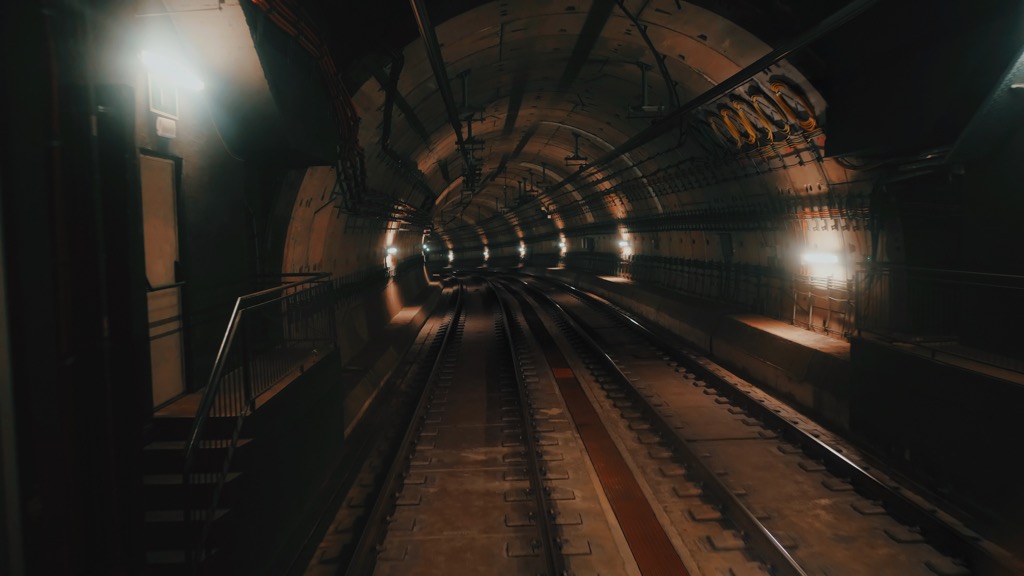 President Franklin D. Roosevelt didn't want the public to see him using a wheelchair, so to keep that secret during his visits to New York, his train didn't stop directly at Grand Central Station, but rather a secret station called Track 61 that was never listed on any train map. Although it's now abandoned, the station was used by wealthy travelers and high-profile politicians who wanted to come and go to New York without being noticed. And for more historical facts, here are 30 things you never knew about royal weddings.

4
The U.S. Government Once Tried to Train Spy Kitties 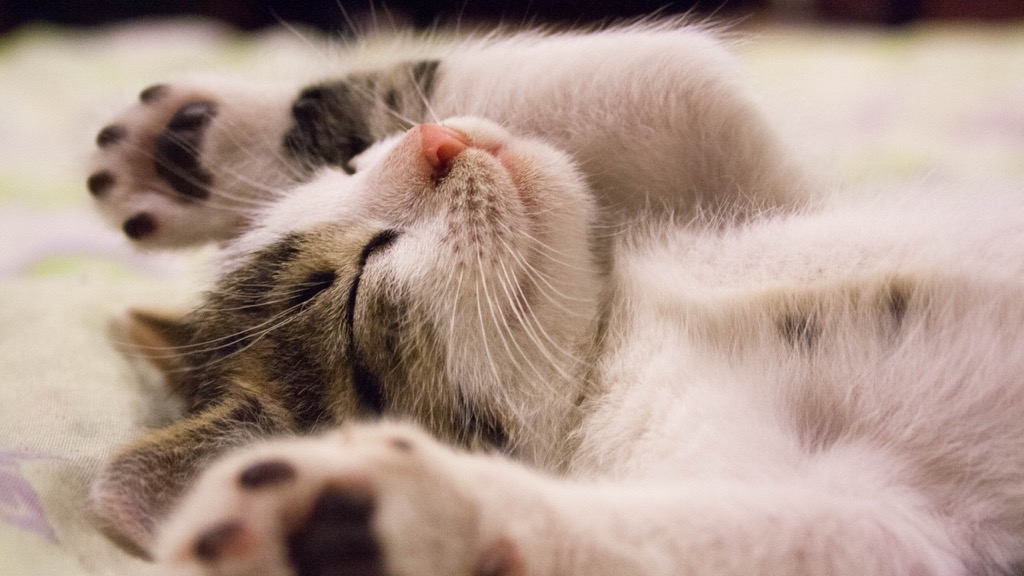 No, this isn't a joke. The CIA seriously spent millions in the late 60s investigating whether domesticated cats could be trained to spy on the Soviet Union. The project was named Acoustic Kitty, because of course it was. It didn't work out, much to the surprise of nobody, but we still have this memorandum, published by the National Security Archive, to prove that spy kitties was almost a real thing. Oh, and speaking of cats: Here are 15 Amazing Benefits of Adopting a Pet. 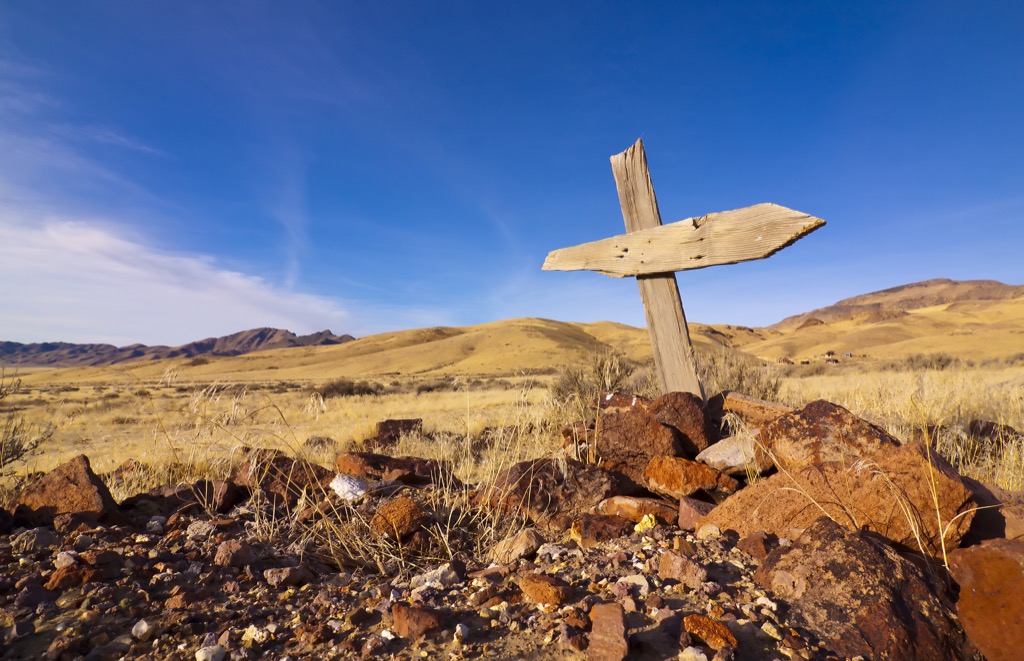 Listen, if you need to test what happens to human bodies during radioactive fallout and you need around 900 human cadavers to do so, you can't be expected to "ask" all the deceased's families for their permission. Or at least that's what researchers for the U.S. Atomic Energy Commission thought during the 50s. Decades later, in the mid-90s, President Bill Clinton formed an advisory committee to investigate and learned the whole staggering truth.

6
Nukes on the Moon

Long before we landed on the moon in 1969, the U.S. Air Force had other plans for the lunar surface. They proposed a "Lunar Based Earth Bombardment System" in 1959, which apparently involved blowing up a nuclear weapon on the moon. Why? According to physicist Leonard Reiffel, who was involved in the project, the whole point was to "impress the world with the prowess of the United States." Personally, we're glad they went with the "one small step for man" plan instead.

No one could have accused the U.S. government of having discriminatory hiring practices in 1945. Well, at least not if you were a Nazi. Post-World War II, President Harry Truman approved the hiring of thousands of German scientists and engineers, including Walter Schreiber, a medical military officer for the Nazis who found a second job at the Air Force School of Medicine in Texas.

It sounds like a conspiracy theory, but the CIA actually did propose committing acts of terrorism against American citizens and then blaming it on Cuba. A memo from March 13, 1962, delivered to the president by the U.S. Joint Chiefs of Staff and dubbed Operation Northwoods, suggested ways to justify a military conflict with the Castro's communist regime, including "Sink (a) ship near harbor entrance. Conduct funerals for mock-victims" and "…blow up a US ship in Guantanamo Bay and blame Cuba." President Kennedy rejected the proposal. Project 1794, a program created by the U.S. Air Force in the 50s, attempted to do what every science fiction-loving kid dreamed about: Create a flying saucer. Their saucer-shaped aircraft, which they never got around to completing, would have been capable of shooting down enemy bombers and flying at ridiculously fast speeds. If you feel up to the task of making your own saucer, check out the declassified blueprints.

10
The My Lai Massacre

Hundreds of unarmed civilians—anywhere from 347 to 504, including women and children—in the South Vietnamese hamlet of My Lai, were murdered by a platoon of American soldiers during March of 1968. High-ranking army officers tried to cover up the massacre for years before it was revealed by U.S. reporters, but even then only one commanding officer was found guilty and served just a few years under house arrest.

When a U.S. B-52 bomber carrying four hydrogen bombs crashed in Greenland in 1968, the government acted fast to make sure all the radioactive material was recovered. They got everything, or so they claimed. But in 2008, a BBC investigation revealed that one of the nukes was maaaaaaaybe still in Greenland somewhere.

12
The Mystery of the USS Jimmy Carter This U.S. Navy attack submarine—the third and last last Seawolf-class submarine in existence, whose primary mission is finding and destroying enemy vessels—has been up to something recently, but nobody is entirely sure what. In September of this year, it was spotted flying the Jolly Roger, the skull and crossbones pirate flag normally displayed after a successful mission. But what exactly was that mission? The Navy isn't telling.

You'd never guess by looking at the Greenbriar Hotel in West Virginia that there's a 112,544-square-foot bunker hidden underneath the resort, with enough bedrooms to accommodate over a thousand Congressmen. The shelter was built in the 60s specifically for members of Congress, just in case Russia bombed us and a nuclear winter made the country uninhabitable. They called it "enhanced interrogation techniques," but according to a Senate Report released in 2014, the CIA has possibly been engaged in wrongful torture of suspected criminals for years.

You probably know Julia Child as a famous American chef and TV host. But according to files released by the U.S. National Archives in 2008, she was also one of our secret weapons during World War II, when she worked for the Office of Strategic Services (which would become the CIA) and personally developed shark repellent to protect Navy men in shark-infested waters. That's right, her first recipe was shark repellent. Think journalists have it hard today? They had nothing on reporters in 1963, some of whom were spied on by CIA agents as part of Operation Mockingbird. In documents declassified in 2007, there were reports of several journalists having their home and office telephones wiretapped, solely because they had contacts with "senators, members of Congress, and other well-placed individuals."

17
The Secret Basement Under Grand Central

You won't find it on any city map, but 13 stories below Grand Central Terminal in New York is a secret basement known only as M42, which housed the rotary power converters that kept the railroads running during the second World War. Adolf Hitler wanted to sabotage the converters, which apparently would be as easy as pouring sand into them. Armed guards protected the room, with orders to shoot anyone who tried to enter carrying a bag or bucket of sand. At least one attempt was made, by four saboteurs working for Hitler, but they were stopped before they ever found the secret basement.

Here's what we know about the U.S. Air Force's X-37B space plane. It's been in orbit around the Earth (off and on) since 2010, it's only 29 feet long, and nobody has any idea what it's doing up there. Well, the Air Force does, obviously, but they're not telling. Some have speculated that it's a battle ship of some kind, capable of shooting down or capturing enemy satellites. Probably the most famous secret military base in the country, Area 51 is located in the middle of the Nevada desert, 83 miles outside Las Vegas, and is used for… something. There have been wild rumors of extraterrestrials and crashed alien spacecraft being stored somewhere in the facility. The CIA didn't even acknowledge that Area 51 existed until 2013, and all they'll admit to is that the base has been used to test spy planes.

Every July, the rich and powerful and politically connected gather together at a 2,700 acre campground in northern California for their own version of Burning Man. What really goes on there is anybody's guess, but the guest list has included U.S. presidents and oil barons, and activities have included everything from druid worship to planning for the Manhattan Project. This isn't some conspiracy theory, this is where guys like Rumsfeld, Kissinger, and Rockefeller go to vacation and do things they don't want the rest of us to see.