6 Flying Cars That Could Really Take Off

The skycraft revolution could be around the corner—and it's electrifying.

Years ago, magazines like Popular Science thrilled geeks to their core with promises of flying cars by the year 2000. Although we don't have those nifty machines quite yet, it seems their predictions weren't all that far off. Get ready for the next big disruption in transportation: Urban aviation.

There's an emerging industry in Vertical Takeoff or Landing Craft, or VTOL, which are essentially auto-piloted, electric-powered drones large enough for human cargo and their luggage. You'll be able to summon them from an app just as you would any current car service. Shortly after, a small car-like cell will quietly drift down from the sky, landing on your office roof or backyard to spirit you and your crew over the maddening, knotted traffic below. No need to split the tab—it will only set you back about the same as an UberBlack Car.

At Uber Elevate, a three-day conference that the transportation company held this past April, the following example was cited to compare travel times from San Francisco's Marina to downtown San Jose. Normally, that drive that would take about two hours—but it could be traversed by VTOL in a mere 15 minutes. Though much regulatory work remains to be done, with heavyweights the likes of NASA, DARPA (the Defense Advanced Research Projects Agency, an arm of the U.S. Department of Defense), Amazon, and Uber accelerating the pace of development, it won't be long before George Jetson-style commuting becomes commonplace.

On the other hand, we could be dreaming. But as we look forward to halcyon days ahead, it's exciting to ponder what might be. Following are an assortment of winged wonders that are ramping up just in case. (And if you just can't wait till then, check out How to Uber a Private Plane).

The Transition, looking somewhat like a model project built in a neighbor's garage, is "a folding-wing, two-seat, roadable aircraft". It doesn't quite fulfill the promise of futurism in terms of style or power source—this one runs on gasoline—but Terrafugia are in the R&D stage of designing an all-electric vehicle, the TF-X.

Nonetheless, the Transition delivers on the urban aviation dream, flying like a typical light sport aircraft and driving like a ordinary car on the ground. Using premium unleaded gasoline, it fits into a domestic single-car garage and converts between flight and drive modes in under a minute. Once aloft, cruising range is about 400 miles at a top speed of 100mph. On the ground, all automotive safety standards apply, with the addition of a full vehicle parachute. In-flight automatic terrain avoidance technology provides a vast improvement on conventional prop planes.

Founded and created by former MIT students, the Terrafugia Transition is expected to go into production later this year at a price of $299,000; you can make a $10,000 deposit at terrafugia.com to reserve one. With this sort of transportation on the horizon, you'll be able to cut your commute time drastically, whether or not you live in one of the 50 cities with the worst commutes in America. 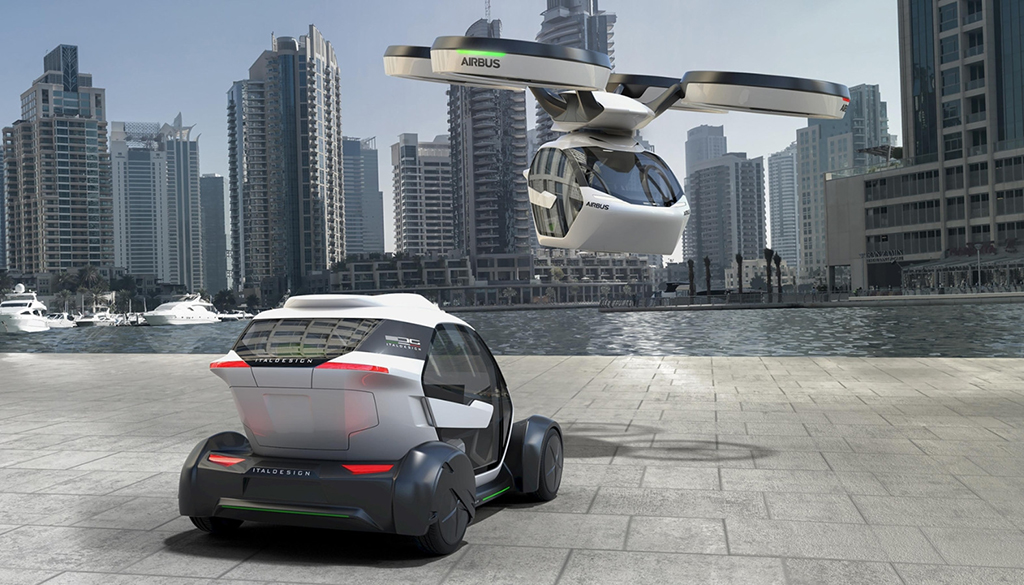 Airbus, maker of the world's largest passenger plane, the A380, has teamed with famed style house ItalDesign for a unique approach to the auto/aero riddle. The Pop.Up is an autonomous concept using a modular passenger capsule that detaches from its four-wheeled ground transport base, transitioning to a quadcopter. A four-rotor, electric air module alights to the roof of the capsule, which simultaneously releases from its wheeled base; the capsule is carried off to its destination, where it can reunite with another four-wheeled base for further ground transport or depart for recharging. If you feel like you're the one who needs to recharge, however, check out the 15 Ways to Be a Higher-Energy Person Immediately. 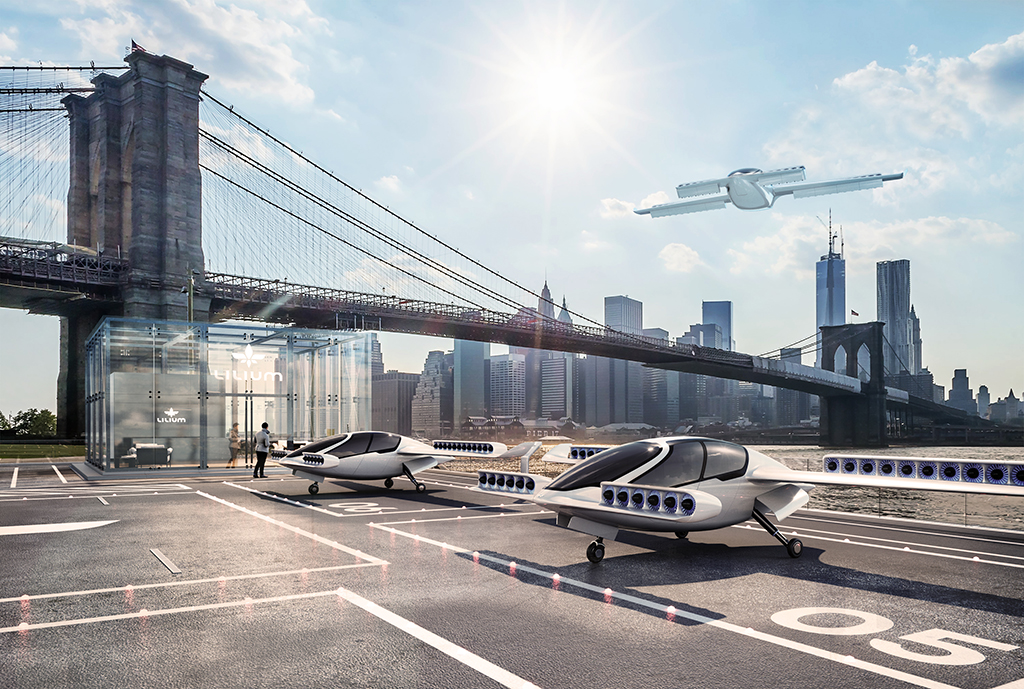 The world's first actual VTOL (electric vertical takeoff and landing jet), the Lilium Jet claims 190 miles of range at 190 mph. Designed for fleet use, Lilium is positioned to be a leader in the upcoming transportation revolution. A flight from a mid-Manhattan port on the Hudson River to JFK Airport can be summoned on-demand and is expected to take only five minutes, emit zero carbons, and cost only $36—about half the price of a taxi, and roughly an hour faster (depending on traffic conditions). 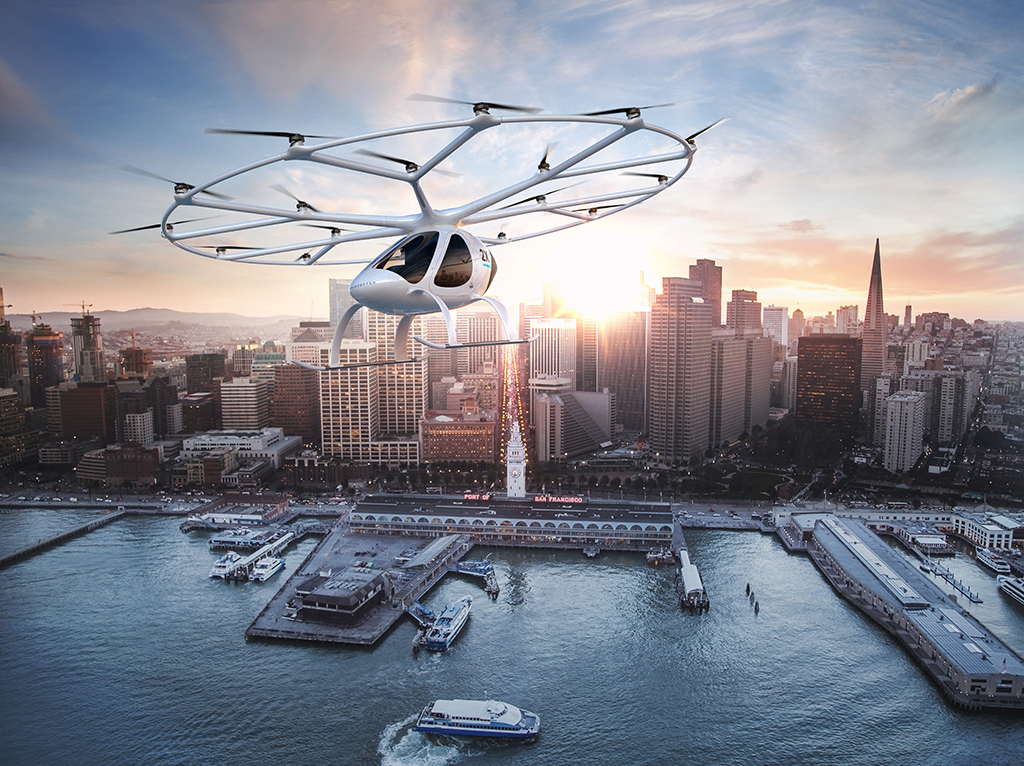 The German aviation startup Volocopter recently scheduled deployment of its 18-rotor VTOL multicopters as part of a flying taxi service (labeled AATs, or "autonomous air taxis") to launch later this year in Dubai. The company's first production model, the 2X, is emissions-free, flying either autonomously or piloted; the multiple rotor setup is a safety precaution that provides redundancy in case of motor failure. It's marketed as perfect for short, inter-city flights with a maximum range of 17 miles at 43 mph, and it is the technological foundation for numerous specialized iterations in development—Dubai is just taking the lead. If you're flying normally, though, Dubai is still a first-class choice, since it's home to one of the 15 sumptuous airport lounges you wish were your final destination. 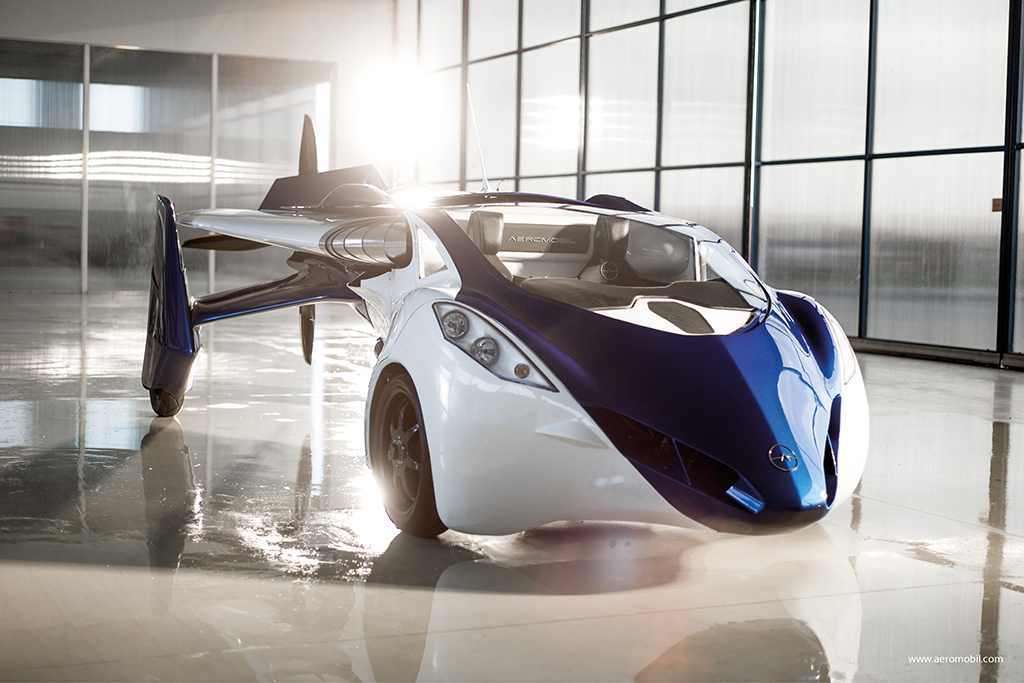 Is that a McLaren P1 in my mirror? No? Wait, what just happened? It's gone airborne!

That seemingly fanciful scenario could actually play out in real time on a stretch of highway in the near future, should you discover an AeroMobil Flying Car tailing you on the Interstate. Able to transition from driving to flight mode in 180 seconds, its wings unfurl, the rear prop extends outward and off it goes, leaving gravity-challenged conveyances in its wake.

In our brave new world, single passenger vehicles with four corners will be known as quad bikes. Mark that down. Among the very first will be the AirQuad flying quad bike by Neva Aerospace, an all-electric, open-air hauler that could see double-duty as an unmanned rescue vehicle with payloads up to 100kg. From this vantage point, though, it looks like the ultimate sky-borne jet ski. And if you can't wait for these to become reality, check out the 6 Luxurious Supercars Vying to Challenge Tesla's Electric Supremacy that are already poised to hit the market.