"They really did seem like they just got married."

For the last five years, London-based photographer Sujata Setia, 36, has been traveling around the world taking family photos. But as she worked, she noticed that her photoshoots often consisted of parents and their kids—in some cases, even their pets—but they rarely included the grandparents.

"I don't know why but it just made me feel like something was amiss," Setia told Best Life. "Maybe because my relationship with my grandparents was always the pillar of my life. … So, I started gifting photoshoots to elderly couples and grandparents with their grandchildren myself."

The results were stunning, so she began inviting elderly couples to come in for photoshoots that celebrate their own love. Apparently, it's become quite the trend.

"I am seeing so many of my students photographing elderly couples across the world now," she said. "It's incredibly heartwarming."

Here are some of her most moving photos, along with the couples' backstories that prove love had the power to keep us young.

1
This dapper gentleman who's always dressed to impress his wife

Setia thought this gent was "too well dressed for a photoshoot in the wilderness" in Wales. So, she said to his wife, "Is it possible for you to ask him to take off his tie? It's too formal."

His wife just laughed and said, "You can try. I haven't been able to succeed at that one for the past 70 years."

2
And who isn't shy about a little PDA either 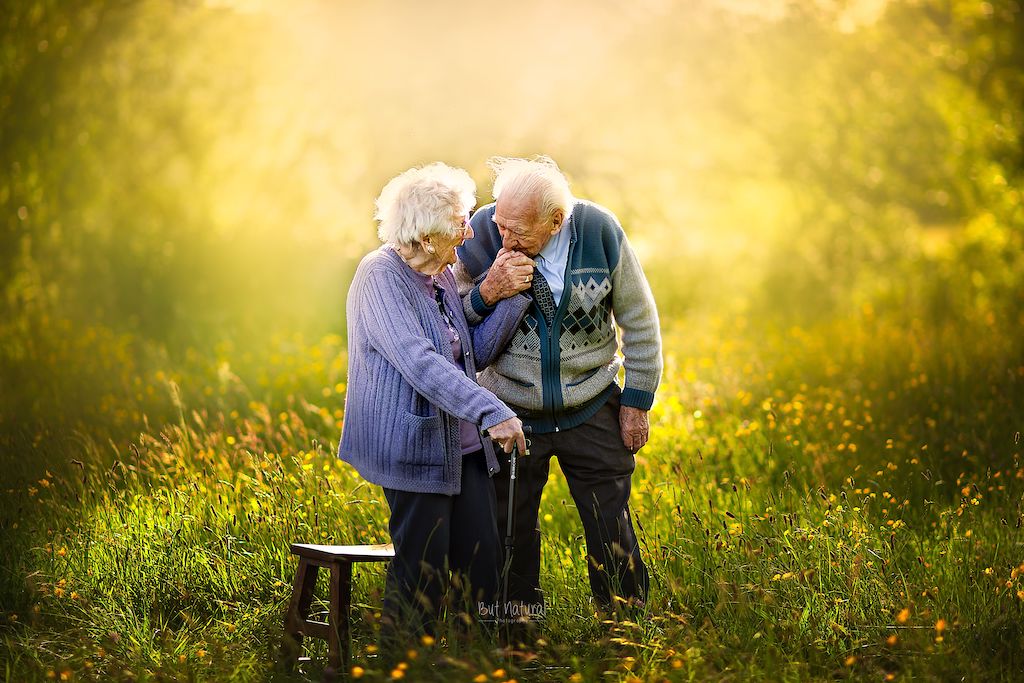 3
This lady who "would not stop kissing her husband"

"This was my latest shoot at the beach in Ireland," Setia said. "It was ridiculous weather that day. Rain and thunderstorms and the couple were freezing. But, boy, that lady would not stop kissing her husband."

4
And who risked it all for love

Setia eventually had to shout, "Mary, will you stop kissing your husband! I need to take different shots." But she still wouldn't stop.

"They were such an amazing couple and so inspiring. One day, they just sold their home and decided to travel the world in a camper van."

5
This romantic duo who had the giggles

Setia was introduced to this couple when she traveled to Belgium to see a good friend of hers. "She took me to casually meet her parents and I fell in love with them. I just had to photograph them. Sandra's mom giggled throughout the shoot. It was hilarious."

Apparently, she just couldn't get over her husband's romantic gesture. "You know that shy giggle when the person you love so much is doing public displays of affection? They really did seem like they just got married."

6
These two who always stop to smell the roses

All in all, doing these photoshoots has made Setia feel uncomfortable with even using the term "elderly" to describe couples in their twilight years.

"They are honestly anything but elderly," she said. "They are so young at heart and have so much wisdom packed in their beautiful minds."

7
These grandparents who still make each other smile

Setia also hopes that these photos will inspire people to spend more time with their grandparents.

"I feel like we get so busy in our own lives we leave behind the most precious and truly unconditional bond of our life sometimes—that with our grandparents," she said. "There is so, so much we can learn from them if we connect with them."

8
And this twosome who isn't shy of the spotlight

And she hopes the series will give people "hope for everlasting love." And for more inspiring photos, check out These Wedding Photos of a Tribute to the Groom's Late Sister Are Truly Miraculous.

Diana Bruk
Diana is a senior editor who writes about sex and relationships, modern dating trends, and health and wellness. Read more
Filed Under
Aging • Marriage • Over 40
Read This Next
Latest News
Read This Next