Jessie, D'Lila, and Chance hit the runway in Venice.

This artist and music mogul is one proud parent right now. On Sunday, Aug. 29, Diddy's three daughters all modeled together, hitting the runway for Dolce & Gabbana. The show was in Venice, Italy, and 14-year-old twins D'Lila and Jessie Combs and 15-year-old Chance Combs all took part. The rapper and his daughters shared their feelings about the event on social media, and they're all thrilled to have had the opportunity.

But while it was a joyful moment for the family, it was also a bittersweet one. Diddy shared D'Lila and Jessie with his late ex Kim Porter, who was a professional model herself and died in 2018. The twins share a striking resemblance to her. Diddy spoke briefly about Porter in a video that appears to have been shared from Venice. Read on to see D'Lila, Jessie, and Chance in the show and find out what they had to say about the experience.

The Venice show was a star-studded event.

Celebrities flocked to Venice for the Dolce & Gabbana Alta Moda show on Sunday. Jennifer Lopez, Kourtney Kardashian, Kris Jenner, Helen Mirren, and many more took in the show as guests, while Jennifer Hudson performed. As is common for the scandal-ridden brand, Dolce & Gabbana invited many kids of celebrities to participated in the runway show. (In fact, Diddy's son Christian took part in a previous year.) In addition to Diddy's daughters, Christian Bale's daughter Luka, Heidi Klum's daughter Leni, and Monica Bellucci's daughter Deva all modeled.

D'Lila and Jessie said it was a "dream come true."

Jessie and D'Lila have a joint Instagram account called The Combs Twins, and on it, they shared their excitement about taking part in the show, which they arrived to in a gondola. Along with photos of themselves in their runway outfits—D'Lila wore blue while Jessie wore black—they wrote, "OMGGGG THIS IS LITERALLY A DREAM COME TRUE. We are so excited that we got to walk in the @dolcegabbana fashion show. Thank you so much for having us join the show in Venice, Italy. And we want to say a HUGE Thank You to our dad and team for helping us get through this amazing show. WE LOVE YOU GUYS AND THANK YOU we hope to be back soon."

In a second post, they thanked makeup artist Pat McGrath and hairstylist Guido Palau. They also noted, "We loved our outfits!"

Older sister Chance wants to do this as a career.

Diddy shares 15-year-old Chance with Sarah Chapman, who was also in attendance along with her mother and Chance's grandmother.

Chance wrote on her Instagram account next to a photo of herself and her sisters, "Venice has been AMAZING with my family! Thank you daddy for everything and I'm honored to have been a part of Dolce & Gabbana Alta Moda show. Thank you @dolcegabbana for having us!!! Grazie!"

In another post, she shared that she hopes to have a career in fashion and entertainment. "I had butterflies and then…THEE SHOW!" she wrote along with a video of herself on the runway. "Thank you @dolcegabbana for this experience of a lifetime as I pursue my dreams in fashion and acting!"

Diddy didn't have the words for how proud he was. 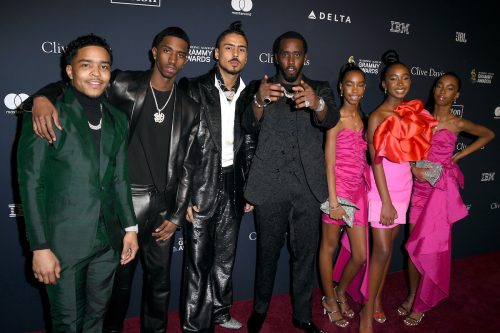 On his own account, Diddy shared pictures from the show and wrote, "Words can't explain. LOVE." In addition to D'Lila, Jessie, and Chance, Diddy also has three sons: 27-year-old Justin with fashion designer Misa Hylton; 30-year-old Quincy, who is Porter's son he adopted; and 23-year-old Christian, also with Porter.

This wasn't the first time that all three of his daughters modeled together. Way back in 2013, the young girls walked in a children's fashion show in New York City. At that time, Diddy tweeted (via the Daily Mail), "Words can't explain how proud I am of my young ladies! There's no greater feeling."

Diddy was thinking of Porter during the trip.

In a video on his Instagram Story that appears to have been filmed while he was in Venice, Diddy shared some life advice and then mentioned Porter. "Life is short. Tomorrow's not promised. Live everyday to the fullest. Be your best. Be your greatest. Be your happiest," the rapper and producer said. "These are things I say to myself I'm not preaching." Then, referring to sun ray coming through the clouds behind him, he said, "Baby, I see you. Look at you shining up there" and tagged Porter's account, @ladykp.ae0fcc31ae342fd3a1346ebb1f342fcb

Diddy and Porter were together on-and-off between the years of 1994 to 2007. The model and actor died of pneumonia at the age of 47.

RELATED: See What Julia Roberts' 3 Kids Look Like as Teenagers.

Lia Beck
Lia Beck is a writer living in Richmond, Virginia. In addition to Best Life, she has written for Refinery29, Bustle, Hello Giggles, InStyle, and more. Read more
Filed Under
Celebrities • Entertainment • Fashion • News
Read This Next
Latest News
Read This Next