27 Things You Should Never Buy at Walmart, According to Experts

If you care about saving money, buy these items somewhere else.

Like many other big retailers, the savings superstore sells everything from drones to diapers—and while some of their supply is worth stocking up on, you can find other items at better prices elsewhere. To help you navigate your next trip to the big box store, we've put together a comprehensive list of what not to buy at Walmart, all in the name of saving you money and making sure you get the best product possible. And for more on where the retail giant is offering the COVID vaccine, check out If You Live in These States, You Can Now Get Vaccinated at Walmart.

Though Walmart does sell HDTVs at a discount, they are only able to offer such deals because the quality of their product matches the price point. "Walmart's HDTVs are at 'low' prices because they are the lower-quality versions than those sold elsewhere," Lori McDaniel, senior content manager at Offers.com, explained to GoBankingRates. "[You can] get higher-quality at low prices at a warehouse store like Costco."

When the experts at Tom's Guide put nine phone carriers to the test in 2017, they spent a lot of time debating which carrier would claim the top spot. However, one thing was always certain, and that was who would land at the bottom of their list: Straight Talk Wireless, the prepaid phone plan offered by Walmart.

"Straight Talk had the slowest LTE speed of any carrier we tested, and it also came in last when we tested customer support," they wrote of their decision. "Straight Talk's performance in other areas—smartphone plans, phone selection, and special features—wasn't strong enough to close the gap between it and other carriers." 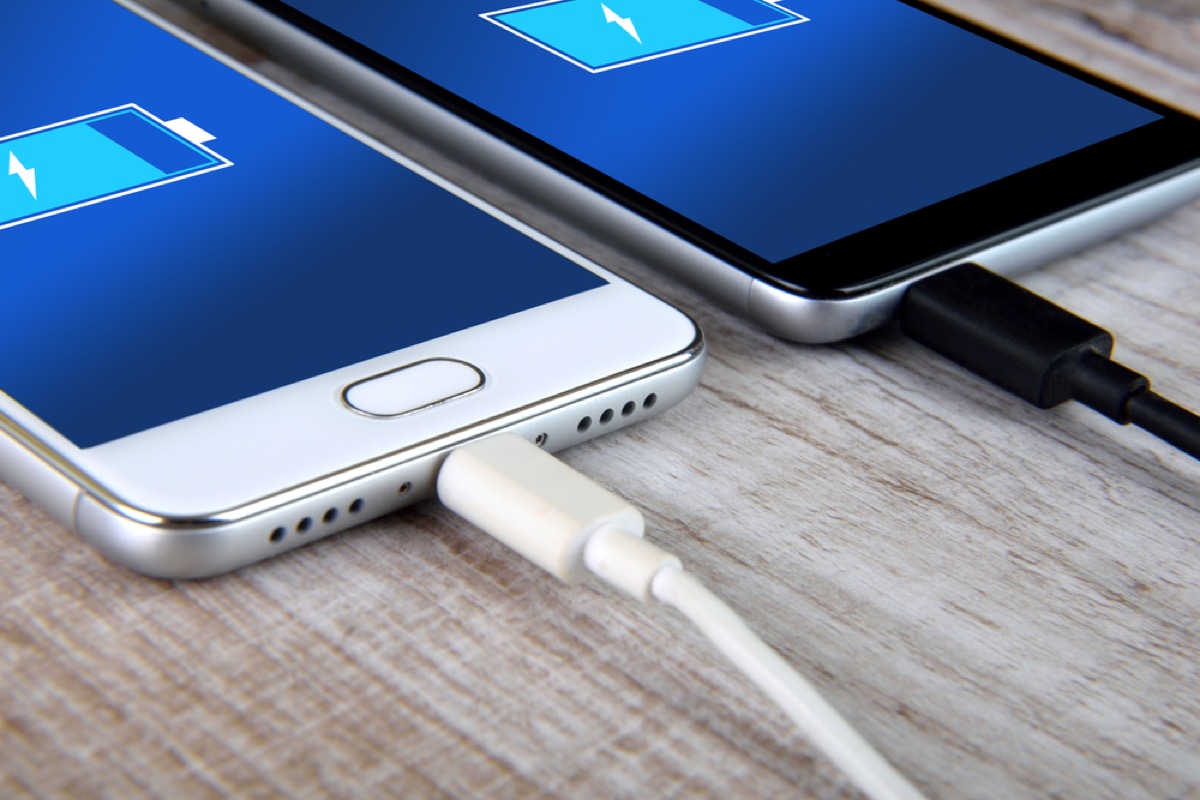 Believe it or not, big chains like Walmart are often "charging WAY more for tech accessories than they need to," writes David Dritsas of Brad's Deals. Rarely is there an instance in which a phone case is cheaper at a big name store versus through an online retailer like Amazon. So it pays to shop around online before making your purchase. And to see where Walmart ranked with consumers, check out This Store Has the Worst Customer Service in America.

There's a reason why Walmart isn't known for selling refrigerators and laundry machines. Not only does the store offer a small selection of appliances, but according to Consumer Reports, their prices hardly compare with bigger appliance-focused retailers like Best Buy and Home Depot.

The retailers that have great deals on appliances (think Best Buy, Home Depot, and Lowes) are also where you should go to buy a vacuum. While those stores have extensive selections and good prices, Walmart has a small selection filled with goods that are unreasonably marked up.

It's important to invest in high-quality luggage that isn't at risk of falling apart in the middle of your trip. And unfortunately, that's far from what you can expect should you purchase your luggage at Walmart.

According to a survey conducted by Consumer Reports, the superstore ranks along with Target, Ross, Sears, and Burlington Coat Factory as one of the worst places to buy luggage. Instead, the survey participants recommended the bags found at REI, Luggage Pros, Amazon, L.L.Bean, and eBags.com.

"Walmart has relatively cheap wood furniture, but this is because it's a lesser quality than other furniture retailers," Carson Yarbrough, a savings expert at Offers.com, told GoBankingRates. "Wooden furniture from Walmart is more likely to break or deteriorate quicker, so buy your furniture elsewhere to save money and the hassle of replacing it in two months."

Every once in a while—like on Black Friday or during an end-of-season sale—Walmart will offer some great deals on gift cards that are worth scooping up. But for the most part, you're going to find better savings on gift cards at warehouses like Costco or Sam's Club, where the cash cards are sold at a discount 365 days a year. And for the latest service being offered at the big box retailer, check out Walmart Just Got One Step Closer to 24-Hour Delivery.

When you need batteries, go to Costco—not Walmart. When Consumer Reports tested out 15 brands of AA batteries, they found that Costco's Kirkland Signature brand of AA alkaline batteries were the best-performing store brand batteries and that they weren't all that dissimilar from the Energizers and Duracells tested.

Walmart customers have many things to say about the store's grocery section—and for the most part, their comments are less than complimentary. When Consumer Reports surveyed more than 50,000 people about their food shopping habits and preferences in 2017, they found that Walmart was "by far the most complained-about purveyor of groceries" and that "about 74 percent of Walmart shoppers had at least one complaint about the national discounter." Among the most common complaints? The quality of meat and poultry.

Seeing as Walmart customers don't have very nice things to say about the store's poultry and meat departments, it comes as little surprise that the produce department isn't all that revered, either. In fact, according to Consumer Reports' grocery store survey, Walmart ranked alongside Target at the bottom of the list of stores with the best produce. Both received abysmal scores for the quality and variety of the produce they offer.

If you buy your supplements at Walmart, make sure you aren't picking up the generic versions. In 2015, the New York State Office of the Attorney General released a statement revealing that several major retailers (Walmart included) were selling store-brand herbal supplement products that "either could not be verified to contain the labeled substance, or which were found to contain ingredients not listed on the labels."

In response, Walmart said in a statement in 2016 after another complaint, "Quality and customer satisfaction are extremely important to us and we want our customers to have complete confidence in the products they buy from us. While we don't believe there was anything wrong with our labeling, we made adjustments last year to provide additional clarity." Nevertheless, their track record isn't great.

Walmart's store brand organic milk might not actually be organic, according to The Washington Post. When reporters from the newspaper took a trip in 2017 to Aurora Organic Dairy—the farm that supplies the organic milk for Walmart—they found that "signs of grazing were sparse, at best" and that "at no point was any more than 10 percent of the herd out" feeding on grass. While most of the other organic milks that the Post tested had acidity levels that you'd expect from organic products, the Aurora milk had acidity levels eerily similar to non-organic versions. Buyers beware!

But just because Walmart's sweet sauce is "good" doesn't mean you can't do better. Consumer Reports recommends shopping for maple syrup by price—and both Trader Joe's and Costco offer steeper savings. And for the latest news on retail, COVID, entertainment, and more sent straight to your inbox, sign up for our daily newsletter.

Since you're going to throw these forks and knives away after they've been used just once, it doesn't make sense to overspend on them. And while Walmart's prices aren't bad, any dollar store will have them beat.

For name brand diapers, turn to Amazon Family. The subscription service—available exclusively to Amazon Prime members—offers up to 20 percent off baby products like diapers and formula. Not even discount superstores like Walmart can beat such steep savings.

While Walmart's toys selection is impressive, its prices are another story. When Kiplinger compared the store's toy prices to several other similar retailers in 2019, they found that Amazon consistently offered better deals on the same products.

For the most part, you'll find better video game prices on Amazon than you will at Walmart. On a message board on GameSpot about this topic, user @shawnmck pointed out, "Amazon sells more games than Walmart does, so they can afford to offer a more substantial discount, such as cheap shipping."

In the entertainment department, Amazon once again prevails over Walmart as the cheapest retailer out there. Erin Konrad, a spokesperson for CouponPal.com, explained to MarketWatch that entertainment—like books, music, or TV show box sets—are typically priced better at Amazon.

If you still prefer to hold the news in your hands, then consider subscribing to your favorite magazine instead of buying it from a store like Walmart. According to a 2016 study from MagNet, monthly magazines offer subscriptions for an average of 63 percent off cover prices. That discount can't be beat.

Any wrapping paper you find at Walmart is going to be of the same quality as the stuff you could find at the dollar store. But while Walmart charges pretty standard prices for their paper, the dollar store charges well, about a dollar.

Spending a lot of money on a birthday or holiday card isn't worth the hit to your bank account since it's the words inside that matter most. It's best to just grab your cards at a dollar store where you know you're getting the best price possible. (Better yet, you can always make one from scratch, which both saves money and adds an element of sentimentality!)

Please don't buy jewelry at Walmart. Though the prices are tempting, the quality of the products leaves a lot to be desired. Plus, "what message does it send to your partner if you buy them a ring at the same place where you get discounted toilet paper?" Jennifer Heebner, market editor at jewelry industry publication JCK Magazines, explained to CBS News.ae0fcc31ae342fd3a1346ebb1f342fcb

If you only need a single bag of pet food, then it's fine to pick it up at Walmart. But if you buy pet food on a regular basis, there are several subscription services that can help you save even more. For example, if you set up automatic purchases on Amazon, you can save anywhere from 5 to 10 percent per bag. That adds up!

Seeing as you spend anywhere from six to eight hours per night in your bed, you aren't going to want to buy bed linens that are anything less than the best. And while Walmart's prices are alluring, "the price for the quality is not good," consumer savings expert Andrea Woroch told MarketWatch. For bedding that is both cheap and comfortable, check out the sale section at a department store like Macy's instead.

At Walmart, you can print your 4×6 photos for just $0.25 per print (or $0.19 if you want more than 75 photos). But while those prices are good, you can do better. Download the Shutterfly app, for instance, and you can print an unlimited number of photos for free.

Electronic experts advise against buying expensive and high-end electronic goods at Walmart. "Walmart is known as a value-oriented retailer and not primarily known as a consumer electronics store," Brian Meiggs, founder of Millennial Money Guide, explained to GoBankingRates. "[I] recently went shopping for a drone, and the level of service and accessories was subpar at my local Walmart—not to mention the price was much higher at Walmart." And for the places that make it shopping online more difficult than it needs to be, This Online Store Has the Worst Customer Service in America.