These all turned out to be major health hazards.

Like fashion fads, health trends come and go—often leaving us wondering how we could ever have been so blind. But unlike a regrettable fashion moment, health mistakes can have serious consequences that last long after we learn of our errors. In fact, throughout both distant (and even relatively recent!) history, people have been duped into believing all kinds of dubious health advice. Read on to learn about five shocking things people thought were good for their health, before seeing the error of their ways.

READ THIS NEXT: The 6 Smartest Heart Health Questions to Ask Your Doctor.

Heroin is now unequivocally known as an illicit substance that harms our health, but believe it or not, it was initially popularized as a cough treatment and prescribed by doctors.

"A century ago, scientists at a German pharmaceutical firm investigated a chemical modification to morphine that made it more palatable as a cough suppressant," explains Yale Medicine Magazine. That "modification" was the introduction of heroin. "Although it worked against coughs caused by serious and then-common diseases such as tuberculosis and pneumonia, physicians and pharmacists soon noticed an unhappy side effect—patients required ever larger doses and were becoming increasingly dependent on the elixir. By 1912 it had emerged as a recreational drug among young men in New York City. Two years later, addicts were knocking at the doors of New York and Philadelphia hospitals in search of treatment," Yale experts write.

Tobacco has grown wild in the U.S. for thousands of years, and in the 1800s, the first cigarette-rolling machine was invented. But it wasn't until the '20s that the public began thinking of cigarette smoking as a health-conscious choice, thanks to ads run by big tobacco companies and the doctors they enlisted to promote their products. Despite smoking and lung cancer rates rising in tandem, the public was unaware of the link between the two at the time.

"Tobacco companies dreamed up slogans such as, 'Not one single case of throat irritation with Camels;' then, to justify their advertising claims, marketing departments sought out pliant doctors to conduct well-compensated, pseudoscientific 'research,' which invariably found the sponsoring company's cigarettes to be safe," Robert Jackler, MD, the Edward C. and Amy H. Sewall Professor in Otolaryngology tells the Stanford Medicine News Center. "The companies successfully influenced these physicians not only to promote the notion that smoking was healthful, but actually to recommend it as a treatment for throat irritation," he explains.

No, we're not talking about fruits and vegetables, which tend to be naturally fat-free and great for your body. We're talking about engineered fat-free snacks, which were all the rage in the '80s and '90s.

While it is true that full-fat foods such as eggs and butter can raise your LDL cholesterol when consumed in excess, many of those common ingredients were replaced with chemicals and added sugar, experts say. "Fatty cookie ingredients like butter and eggs add a lot of flavor," writes the team at How Stuff Works. "To make up for the lack of flavor when those items aren't used, manufacturers add in extra spices and a lot more sugar to trick us into not noticing the missing fat."

Now viewed as generally unhealthy, these products are also full of some surprising additives. "To deal with texture issues, manufacturers will add food binders like gums and starches and also water. However, as a result of adding water, these fat-free products aren't as shelf stable, so surfactants and emulsifiers like mono- and diglycerides (close cousins to fats, which are triglycerides) must also be added," their experts write.

4
Using mercury as a syphilis treatment

In the 17th through 19th century—before the discovery of penicillin in 1928—doctors used to prescribe mercury as a treatment for syphilis, says the Pharmaceutical Journal. This was taken orally, injected, or applied as a salve on the skin.

Of course, as we now know, direct exposure to mercury can damage the brain, kidneys, liver, nervous system, immune system, and more. Those who didn't die of untreated syphilis would often succumb to mercury poisoning over time. 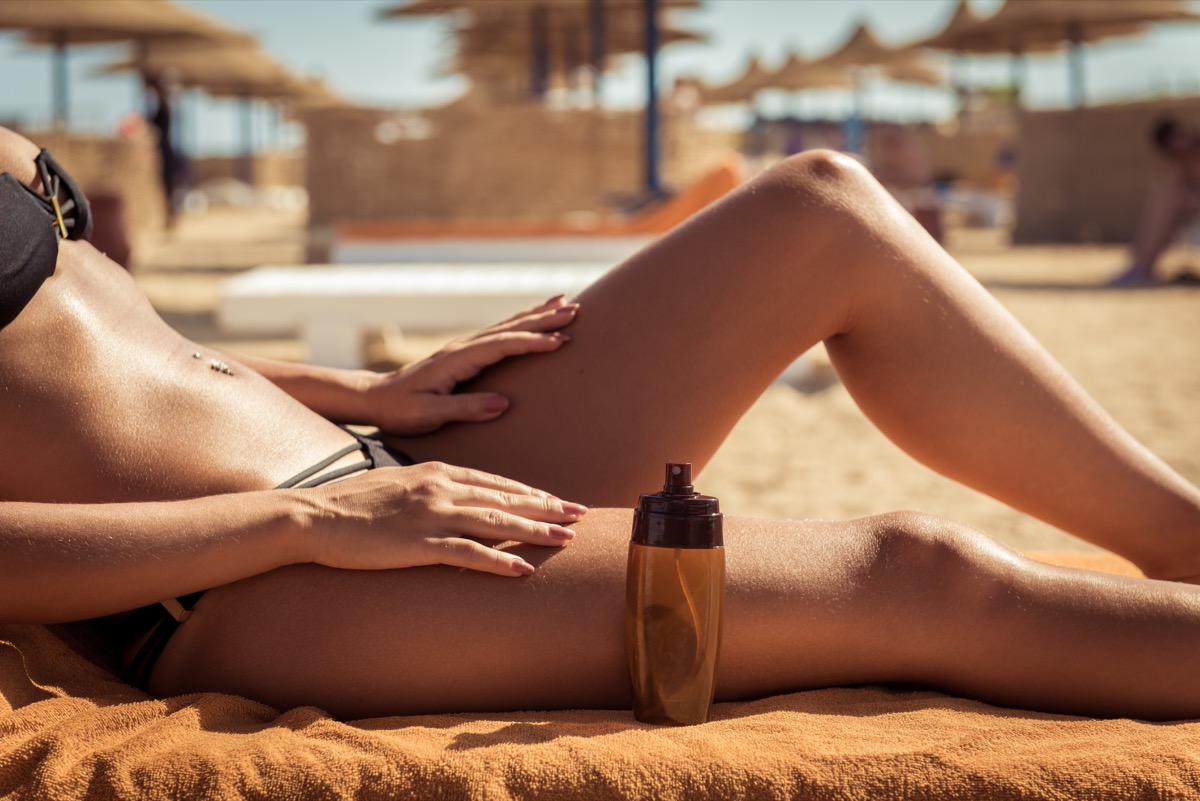 To this day, there are still tanning devotees who believe that unprotected sun exposure delivers "a healthy glow," but most people are by now aware that tanning can cause serious health complications.

"Sun exposure or spending time in tanning booths has many health experts worried: it damages skin and increases the risk of skin cancer," say experts from Harvard Health Publishing. "The risk rises if tanning leads to a sunburn—according to the American Academy of Dermatology, a single blistering sunburn can nearly double one's lifetime risk of melanoma, the most deadly form of skin cancer. So, it's ironic that one of the reasons people tan is to look healthier," the outlet notes.