25 Craziest Facts About the South

No, it's not all great food and sweet tea.

The South is home to many things, from sweet tea to fiercely defending "y'all" as the only acceptable way to acknowledge a group of people. To northerners, life below the Mason-Dixon Line may feel like a different world, a quaint land full of oddities and mysteries. But to southerners, it's all totally normal—well, for the most part.

Yes, even the average southerner may not grasp the full extent of how enigmatically rich the region is. Behind the illustrious history and delicious traditions, you'll find all manner of wacky, wild bits of trivia. So, to shed light for northerners, southerners, and everyone in between, here are 25 of the most astonishing facts about the South. Despite the Civil War ending more than 150 years ago, Irene Triplett is still receiving a monthly check (in the amount of $73.13) for it from the Department of Veterans Affairs—and she's the only person left alive who is. Triplett, who just turned 88 this year, is the daughter of Confederate solider Moses Triplett, who deserted right before Gettysburg, and died in 1938.

After a group of monkeys at the Caribbean Primate Research Center, in Puerto Rico, became inflicted with an outbreak of Herpes B, sending locals into a mild panic, the state of South Carolina swooped in to save the day: by offering up an empty island where the infected primates could live.

Now, Morgan Island, just north of Beaufort, plays home to more than 3,000 rhesus monkeys. But don't go trying to visit! The land is owned by the South Carolina Department of Natural Resources, and protected under federal law, and the monkeys themselves are under the jurisdiction of the FDA—for research purposes. As such, stepping foot on the island is strictly prohibited. 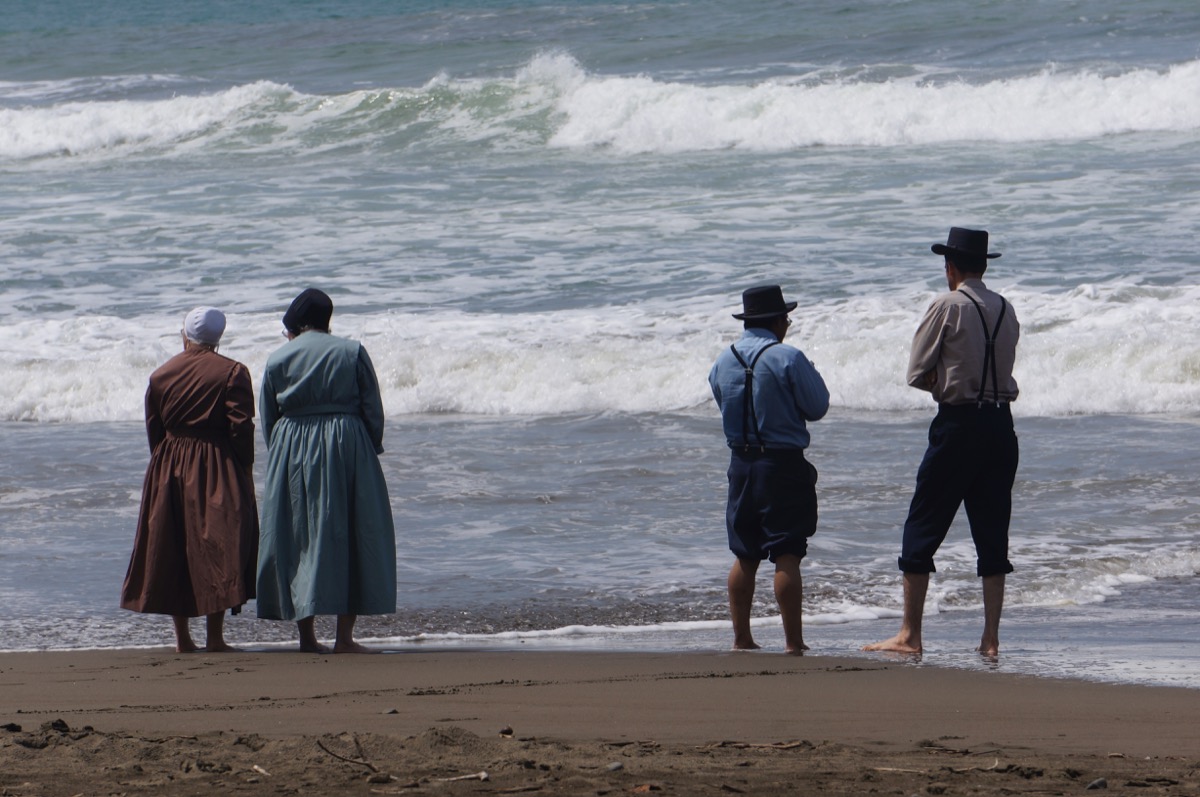 Where do the Amish go on vacation? Pinecraft, a neighborhood in Sarasota, Florida. For nearly a century now, Amish families from all over the country travel down to Florida to get a taste of the sunny atmosphere. Most are shuttled down in specialized charter buses, and the strict rules of the Amish community are loosened for the sake of a beach vacation.

Or, rather, people in South Carolina weren't allowed to get tattoos in South Carolina until 2004. Tattooing was illegal in the state before then, so residents had to travel out-of-state if they wanted some fresh ink. Within the first decade of it being legal, more than 100 tattoo parlors opened up.

5
The world's largest drive-in restaurant is in Georgia 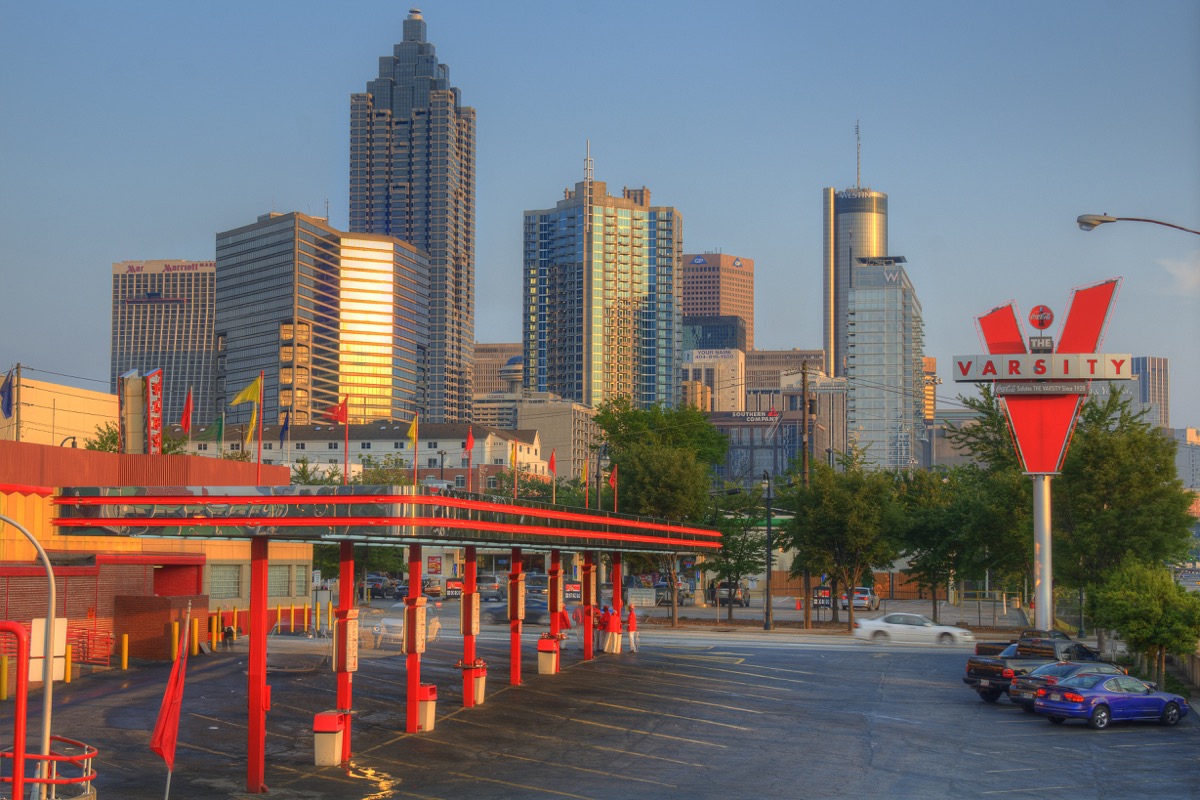 The Varsity restaurant is an Atlanta staple, as well as a world-record holder. A hot-spot for fast food since 1928, the world's largest drive-in restaurant can accommodate around 600 cars at one time. 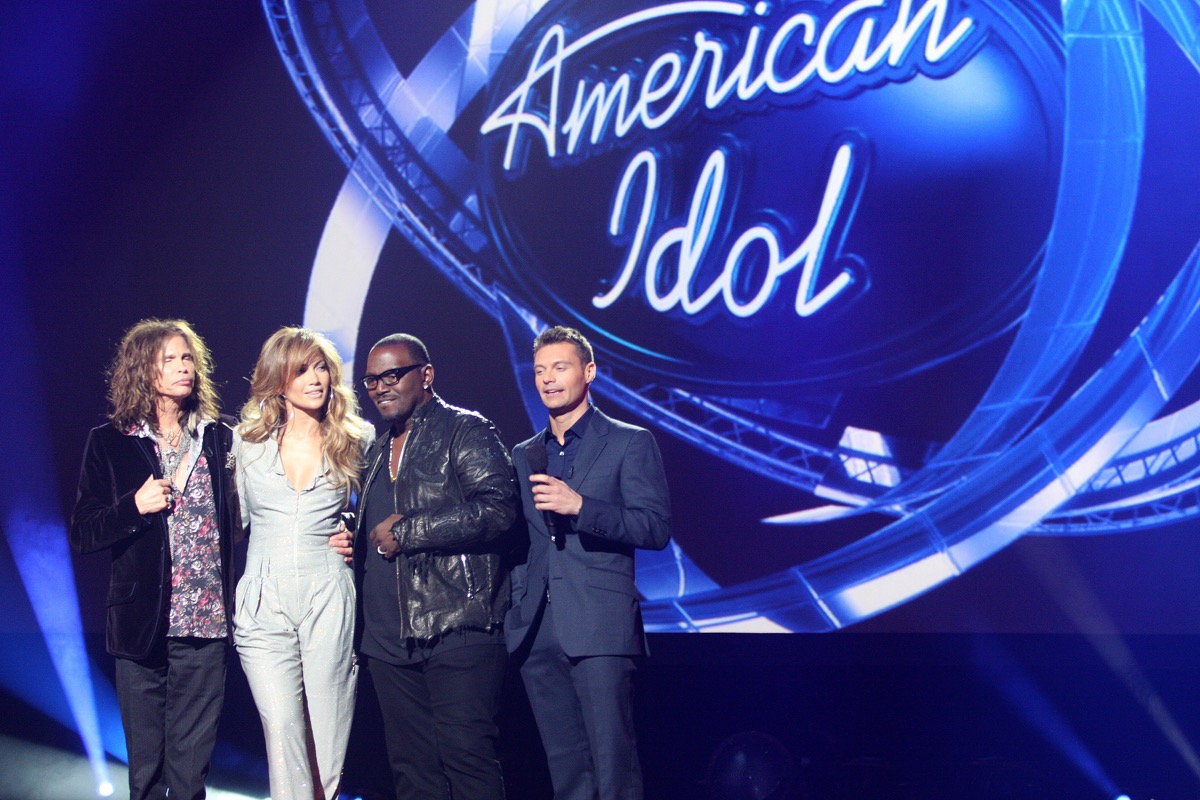 If any one state is a bona fide breeding ground for American Idol finalists, it's North Carolina: Fantasia Barrino (2004), Scotty McCreery (2011), and Caleb Johnson (2014) all call the Tar Heel State home. No other state has produced more than one finalist except for Alabama, who follows North Carolina's with just two. 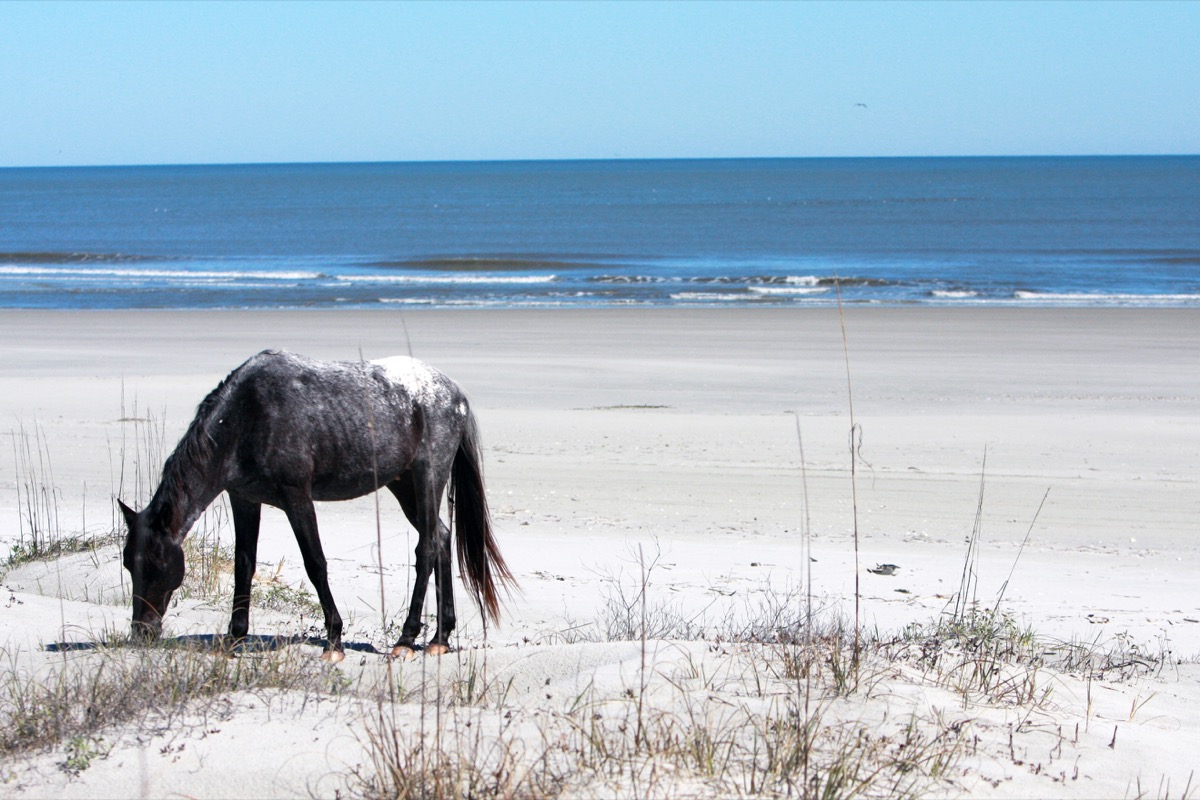 There are nearly 200 horses located on Cumberland Island, right off the coast of Georgia. All the horses are wild and roam freely around the island. You can visit the island to see the horses, but it's limited to a certain number of visitors per day, so be sure to make reservations.

8
Cannonballs were discovered under Alabama sidewalks in 2015 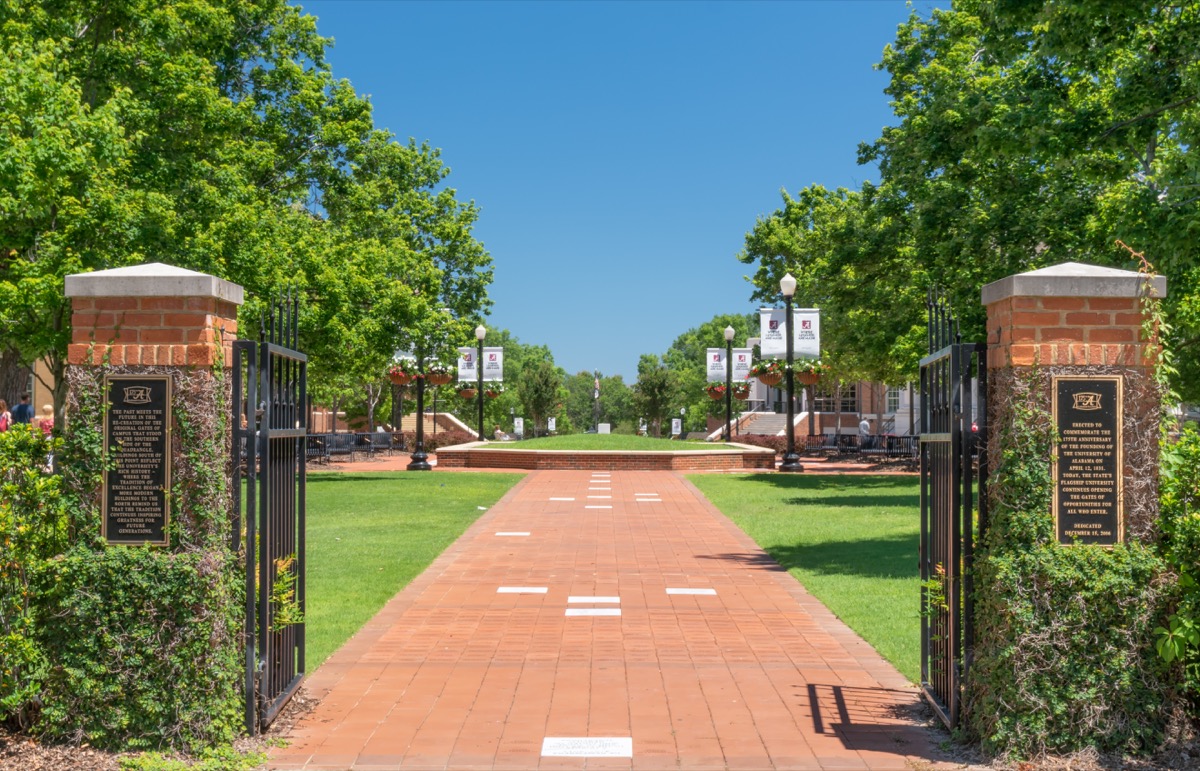 A bomb squad had to be dispatched to the University of Alabama in June 2015 after a group of construction workers discovered Civil War-era cannonballs under a sidewalk they were repairing. "Out of an abundance of caution, EOD technicians were called to address any safety issues," a university spokesperson said at the time. The squad ultimately recovered 10 cannonballs.

9
There was once a bar on the Tennessee-Georgia border

That's right: Patrick's Pub and Grill was located in both Copperhill, Tennessee, and McCaysville, Georgia. However, if you wanted a cold one, you could only drink it on one side: McCaysville is located in a dry county. Sadly, Patrick's shuttered in 2015.

Georgia may be known as the Peach State, but its neighbor-state, South Carolina, actually does the heavy-lifting when it comes to producing peaches: South Carolina harvests three times the amount of peaches that Georgia does.

However, neither state produces the most peaches in America; that title is reserved for California. And yet, the "peach rivalry" is so prevalent that it even resulted in a Twitter spat between the official accounts for each state's agriculture department.

The mini monument is located on the side of Interstate 55 in Ridgeland, Mississippi. But it's not just for looks. Underneath the facade, you'll find a cell phone tower. It came about when Ridgeland's mayor decided that the mini replica would look more appealing than your run-of-the-mill metal monstrosity.

Next time someone kicks sand towards your beach chair, maybe just brush it off instead. Per one Myrtle Beach ordinance, swearing on the beach can net you a fine up to $500 or up to 30 days in jail. Though, according to a report in The Sun News, charges are usually only ever levied against folks who are also charged with disorderly conduct (or similar violations). 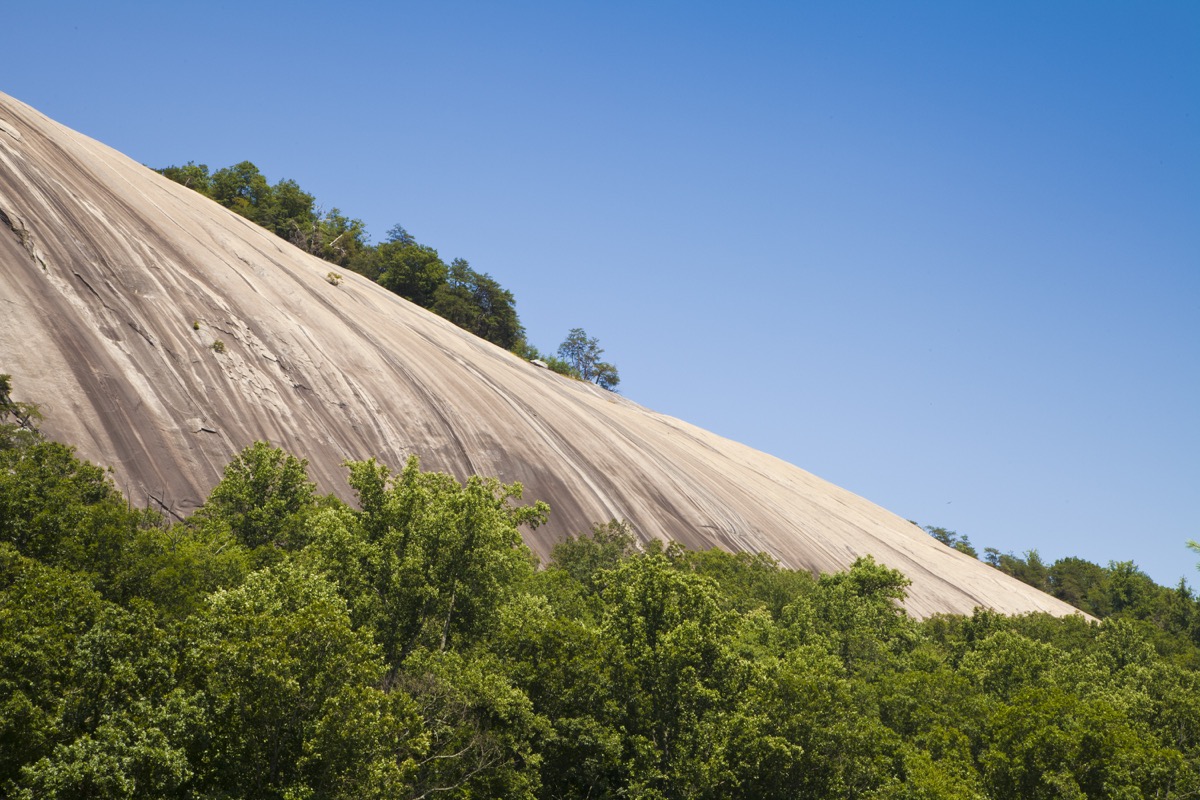 You wouldn't expect "shrimp" and "mountain" to go hand-in-hand, but at Stone Mountain, in North Carolina, it's a common occurrence. There are small pools at the top of the mountain—about 1,683 feet above sea level—where tiny live shrimp appear during the summer months. Clam shrimp usually appear in the freshwater pools during the rainy season, and fairy shrimp were discovered on top of the mountain in 1940, but have been listed as critically endangered by the International Union for Conservation of Nature since.

14
There was a "Phantom Barber" that haunted a Mississippi town 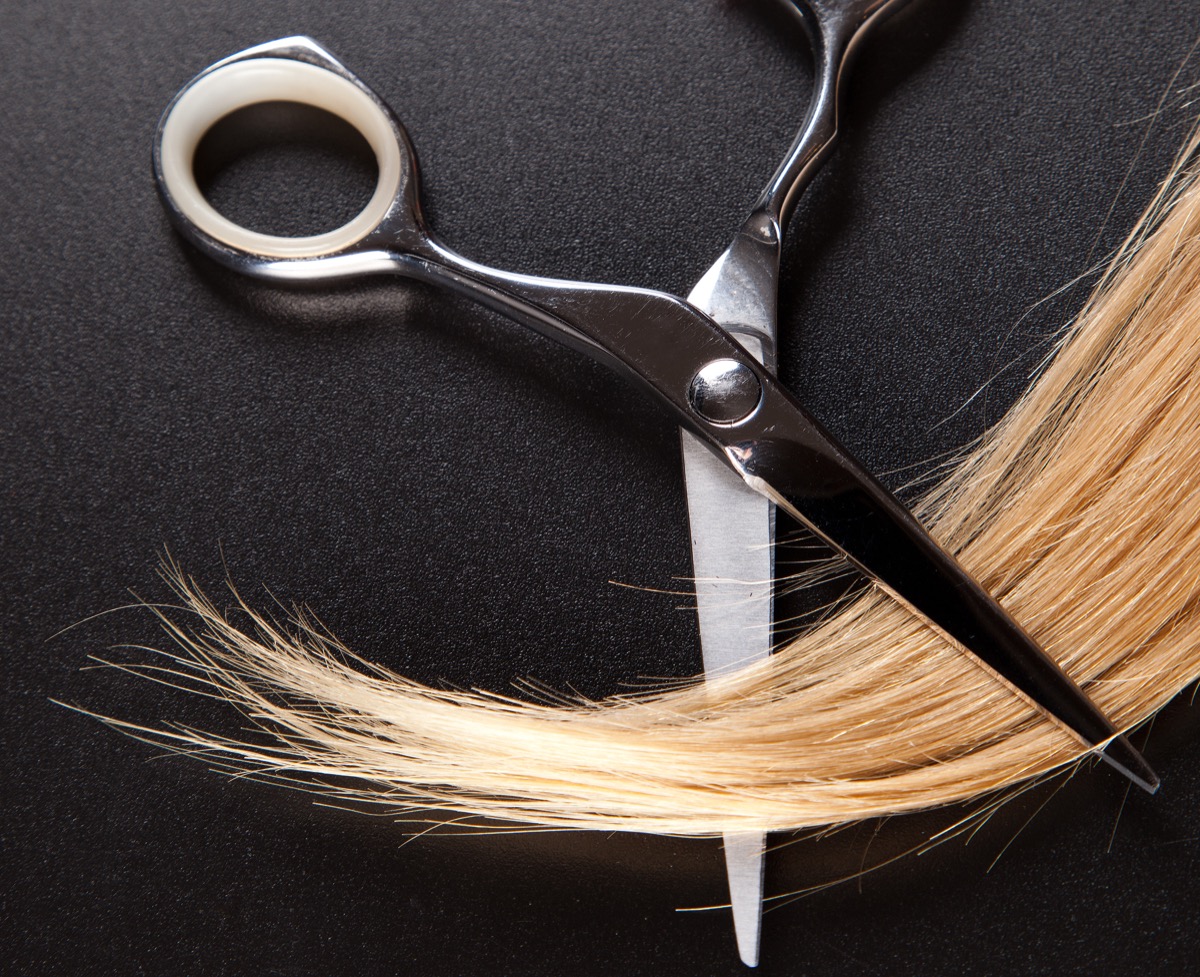 Pascagoula, Mississippi, experienced a string of home invasions during the summer of 1942. But these weren't your normal B&Es. Instead of waking up to lost possessions, townspeople would find locks of their hair missing. Nicknamed "The Phantom Barber," the intruder even once cut off hair from a sleeping six-year-old.

One man was arrested for the invasions, but after passing a lie detector test, he was let go. Since then, no one has been tied to the hairy crimes since—but no one has woken up with missing hair, either.

15
Kingston was the capital of Tennessee for exactly one day 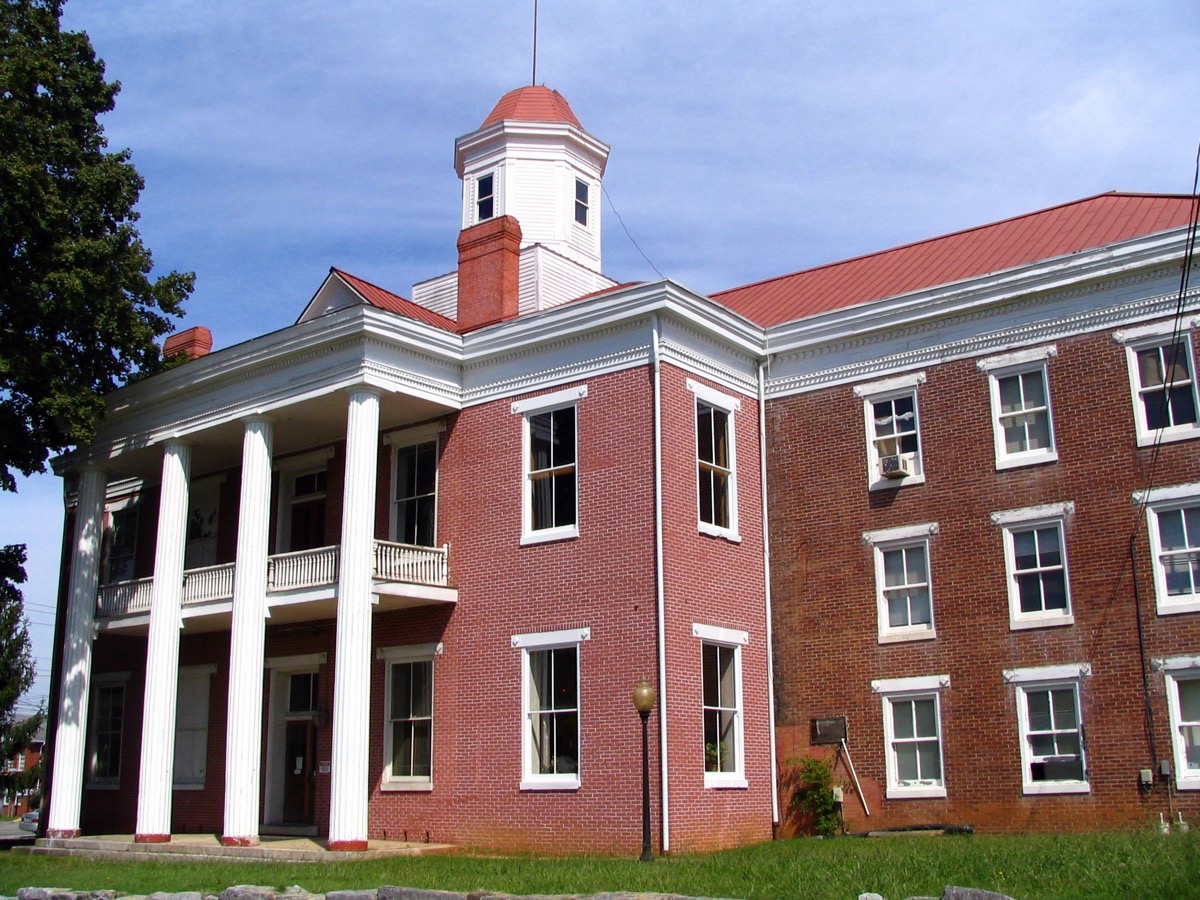 And it was the result of a dirty trick by early settlers. As part of the Tellico Treaty of 1805, the Cherokee nation called for the state capital to be moved to Kingston. Unfortunately, the Cherokee bargaining party didn't specify how long Kingston was to remain the capital. So, the settlers agreed to the treaty, and legislators met in Kingston for a few hours, to make it count. But the very next day, they returned to Knoxville. (Nowadays, you'll recognize the capital as a little place called Nashville.)

16
There are more than 70 streets named "Peachtree" in Atlanta 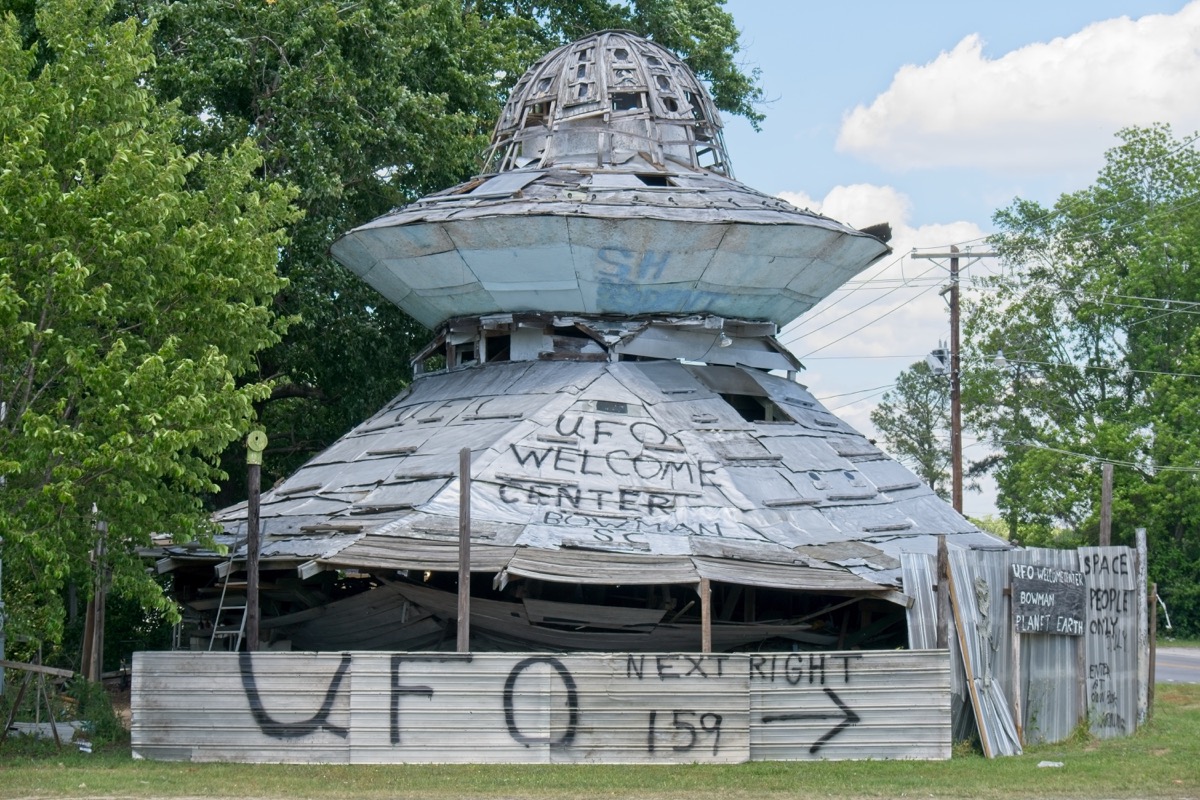 South Carolina resident Jody Pendarvis has made it clear that his place is the place to be when the aliens finally visit. The unofficial "welcome center" is makeshift designed to look like two silver UFOs. Inside one of the ships, Pendarvis has put a toilet, shower, television, and even air conditioning—everything to make an extraterrestrial visitor feel welcomed. Until the aliens come, however, human visitors are allowed to visit with an admission price that varies day-to-day, but usually stays under $20.

Ave Maria Grotto in Cullman, Alabama, has around 150 mini replicas of some of the most famous religious structures in the world, including the iconic Lourdes Basilica Church, and even some secular monuments, like the Leaning Tower of Pisa and the Great Wall of China. Located on the grounds of St. Bernard Abbey, the landscape is the handiwork of Brother Joseph Zoettl, a Benedictine monk who dedicated nearly 50 years to the project. ae0fcc31ae342fd3a1346ebb1f342fcb 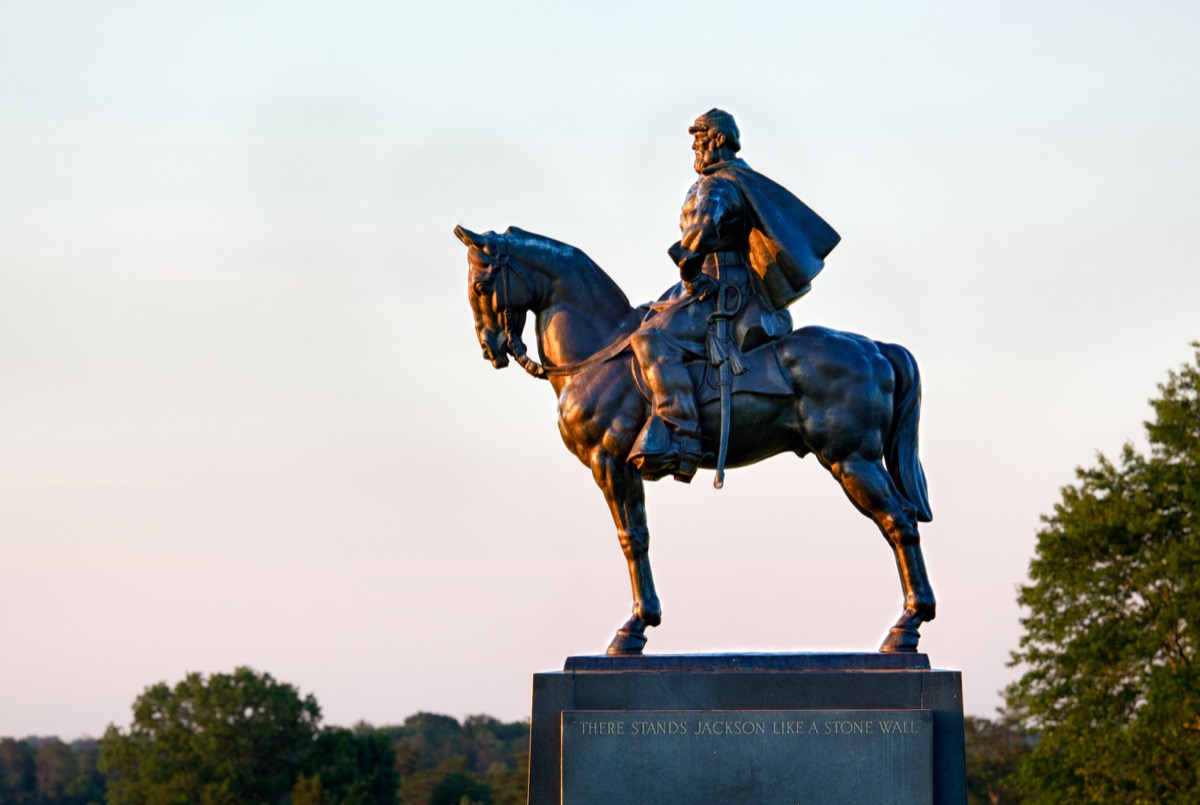 The Confederate general's left arm was amputated near Chancellorsville, after he was accidentally shot by his own troops. At the time, he lived, but his arm was laid to rest at the Ellwood Manor cemetery. (The rest of his body, including, yes, his other arm, is buried more than 100 miles away, in Lexington, Virginia.) To date, you can still find the marker for Jackson's arm in Ellwood—but whether or not the arm is still buried there remains to be a huge controversy. 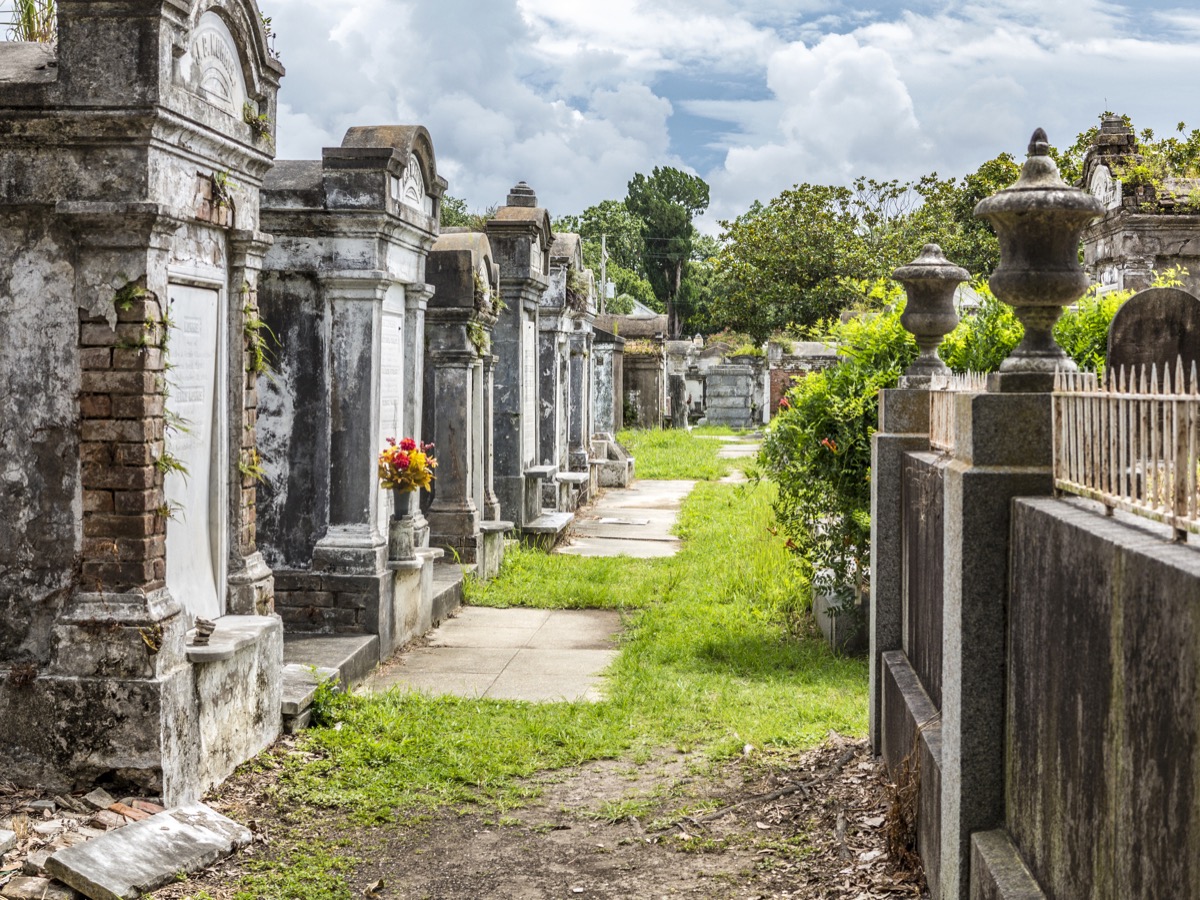 As caskets began to float in New Orleans, early settlers had to come up with new plans for the dead. Being slightly below sea level, New Orleans' water table was too high to dig far underground. The solution? Townspeople settled on building tombs above ground instead of graves under. Now, these so-called "Cities of the Dead" have become unique tourist attractions.

21
The deadliest natural disaster in U.S. history happened in Texas 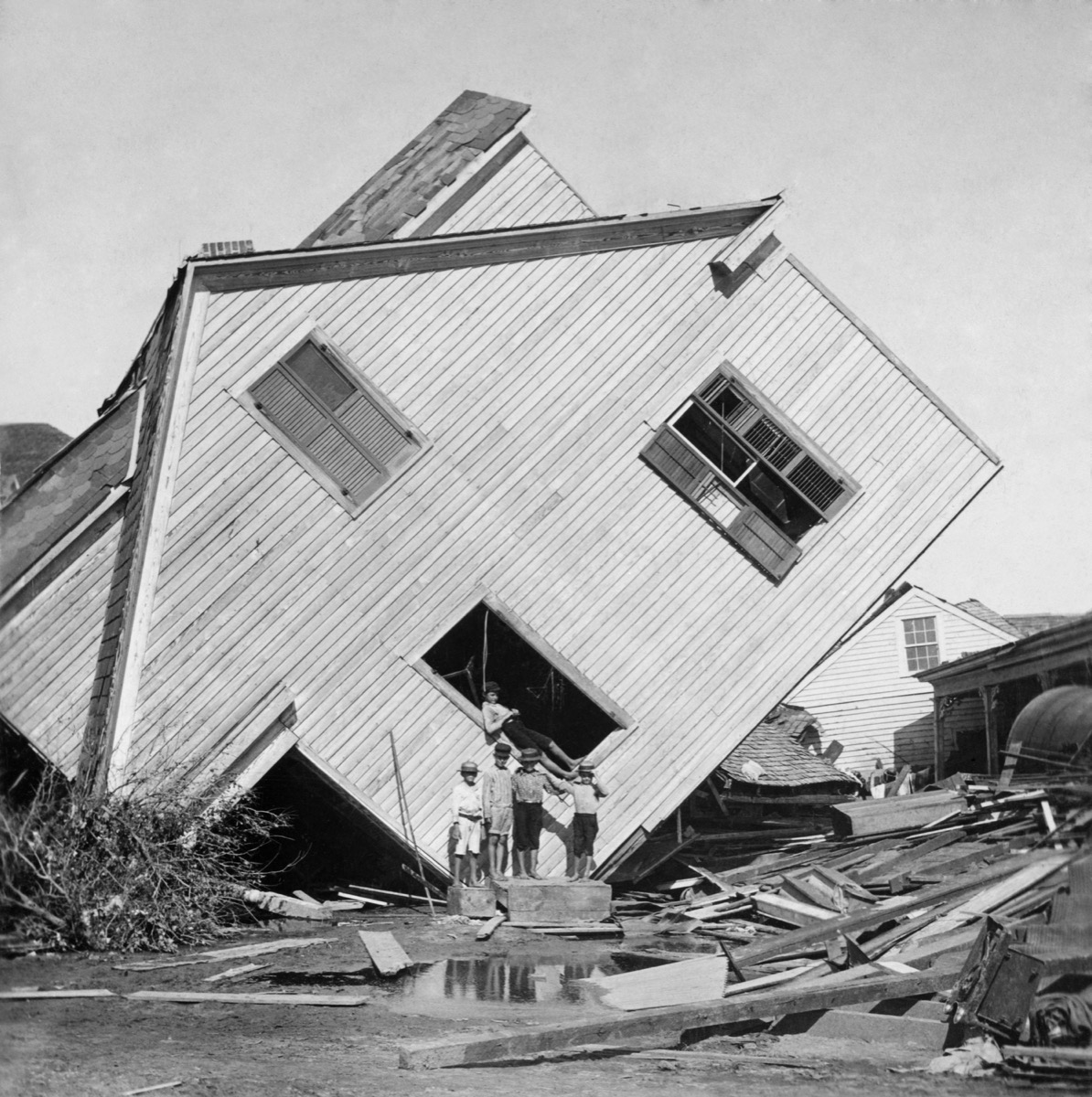 The Great Galveston Storm of 1900 resulted in an estimated 6,000 to 8,000 deaths after an unnamed hurricane wrecked the Gulf Coast. At the time, predictions had the storm going up the east coast instead. The port city of Galveston, which sits on a barrier island in the Gulf of Mexico, was left unprepared and un-evacuated when the category 4 hurricane hit with winds surpassing 135 mph. And for more terrifying facts about Mother Nature, don't miss these 33 Facts About Storms That Will Make You Run for Cover. 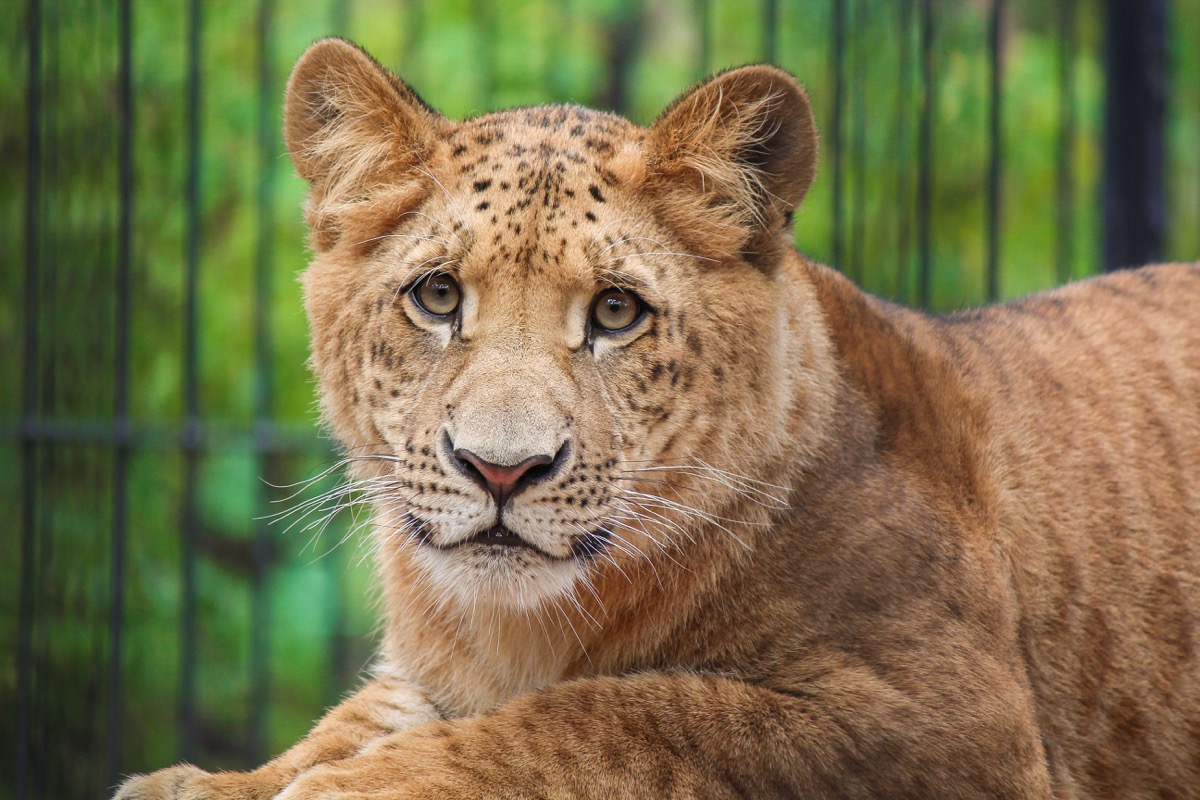 An adult male liger (that's the result of a male lion and female tiger, or tigress, mix) named Hercules live at the Myrtle Beach Safari, a wildlife preserve in South Carolina. Standing at 49 inches tall and 131 long, plus clocking in at 922 pounds, Hercules is recognized by the Guinness Book of World Records as the largest living cat. Reportedly, he eats 20 pounds of chicken or beef meat per day. Be glad he's not your cat!

23
There's a tree in Georgia that owns itself

A white oak in Athens, Georgia, is the only one calling the shots around its roots. Aptly named "Tree That Owns Itself," the oak was granted autonomy through a deed the land's owner, William Henry Jackson, drew up before he died.

Per the terms, the tree was given the eight-foot plot of land it stood on. The original tree was knocked down by a windstorm in 1942, but neighbors planted a new tree (pictured) in the original spot to honor Jackson's wishes. While not technically legal, the city of Athens still recognizes the tree's rights. 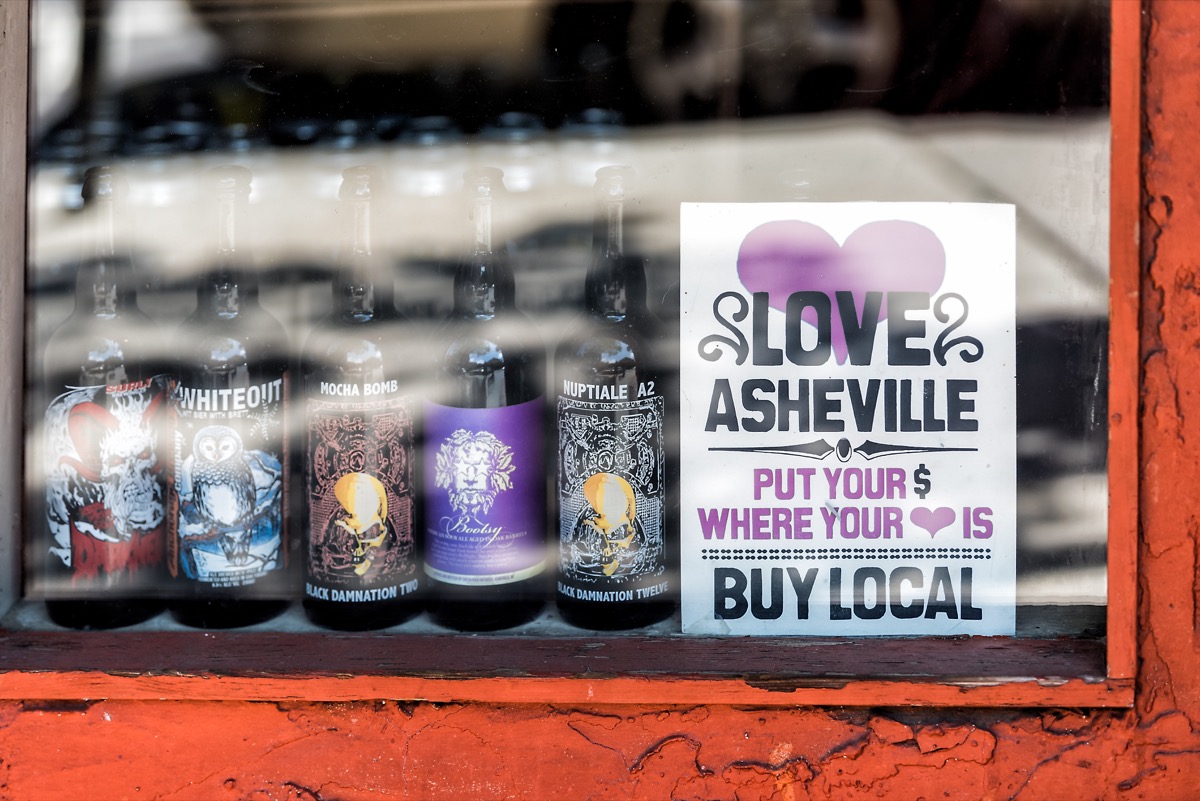 Well, the city's formal name is Asheville, but if you're looking for the place to bar hop (for hops, at least), there's no better destination: The city has more breweries per capita than anywhere else in the United States. After the city's first brewery opened in 1994, a craft beer revolution kickstarted at a precipitous rate. Today, Asheville has around 30 breweries, and hosts multiple annual beer festivals and countless beer tours. And for some amazing non-Asheville breweries, learn all about The Best Craft Beer In Every U.S. State.

25
"Don't Mess With Texas" started as an anti-littering campaign 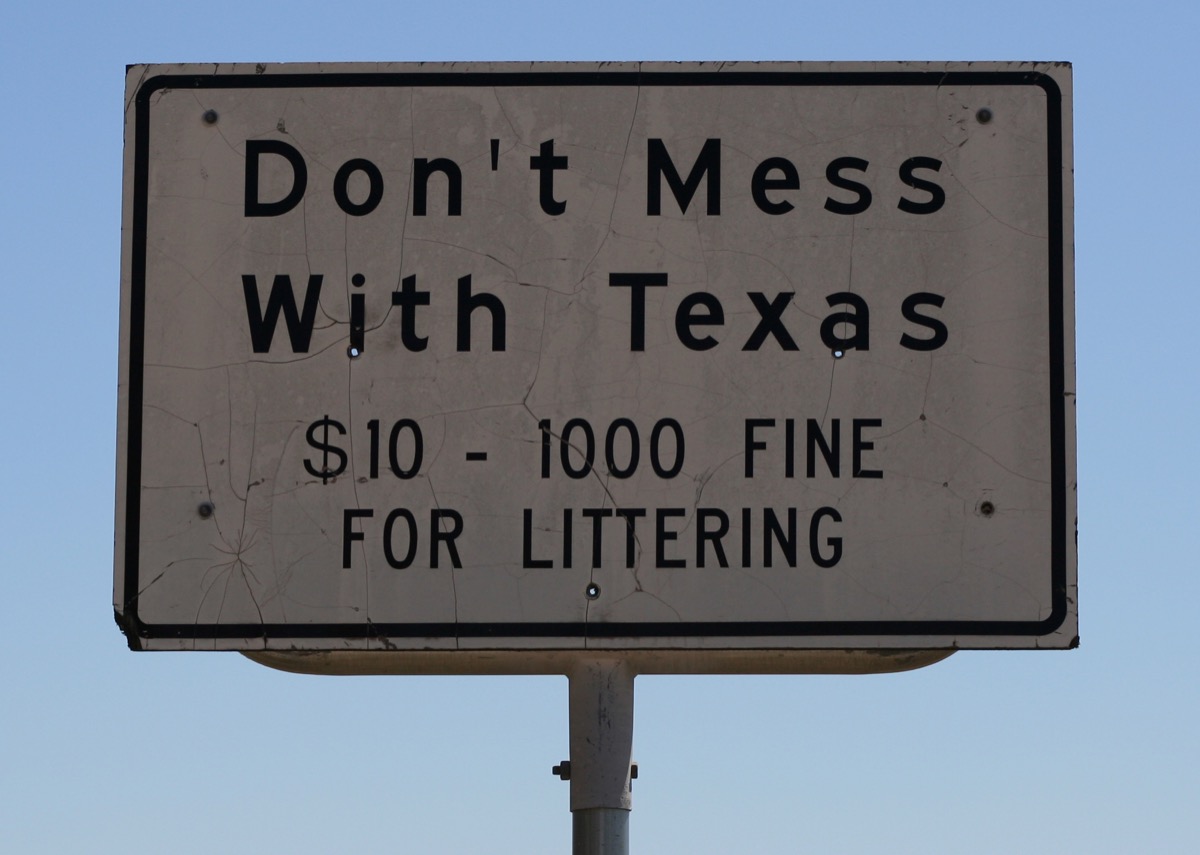 While it's now a phrase of home-state pride, "Don't Mess With Texas" actually had a "trashier" beginning. During the 1980s, the Texas Department of Transportation dished out nearly $20 million annually for trash pick-up. An Austin-based advertising agency came up with the phrase "Don't Mess With Texas," after the DOT put out a request for a marketing campaign. The slogan has only taken off since then. But remember what it originally stands for: put that Whataburger wrapper in the trash, not on the ground. And for more trivia about this fascinating state, don't miss these 25 Crazy Facts About Texas.