6 Common Plants That Keep Snakes Out of Your Yard, Experts Say

From flowers to herbs, there are quite a few plants that you probably didn't know repel snakes.

Honey badgers, bald eagles—there's no shortage of foes that definitively conquer the snake. But few are more effective than a specific array of snake-repellent plants. "No one 'magic' plant will repel all snakes," Lindsay Hyland, a gardening expert and the founder of Urban Organic Yield, noted to Best Life. "Different plants have different properties that may or may not appeal to a certain type of snake, so it really depends on the type of snake you are trying to repel and what kind of environment it is in."

Snake-repellent plants broadly filter into one of two categories, according to Georgina Ushi Phillips, DVM, a writer for The Reptile Room and a Florida-based veterinarian. The first category is physical; they're uncomfortable to slither on, so snakes steer clear. The others are olfactory; snakes avoid them because the smell is offensive. Either will do the trick, but keep reading to hear from experts about the best of the best.

READ THIS NEXT: The First Place You Should Check for a Snake in Your Home, Experts Say.

There's a hint of irony that Mother-In-Law's Tongue—also referred to as the snake plant—is a known snake-repellent plant. Of course, there's its name, but it also looks like a snake itself! This appearance has lent it an almost mythological air, that serpents stay away because they're scared of it. "It's often suggested that the visual appearance of [this plant] is what deters snakes, but I haven't found any evidence to support that," Phillips notes. Instead, she says it's "likely the sharp and stiff leaves" that drive any snake neighbors hither.

A bonus is that the snake plant is very low-maintenance (it's technically a succulent) and is considered a great choice for plant novices.

Like Mother-In-Law's Tongue, holly plants—which you may recognize for their holiday season-approved red berries and pronged leaves—can keep snakes at bay thanks to the surface of their prickly leaves. "The unpleasant texture is usually easy enough for snakes to avoid," Phillips says. For additional snake repellent, she suggests spreading holly leaves around your yard.

For more snake advice delivered straight to your inbox, sign up for our daily newsletter.

The unofficial fall flower, mums—formally known as chrysanthemums—are not just a pretty addition to your yard; they're also a seriously potent snake repellent. "There are many plants that repel snakes, but the most effective ones are those that contain a chemical called pyrethrum," Hyland says. "This natural chemical comes from the chrysanthemum flower and is deadly to snakes."

Mums will also keep many insects at bay. In fact, according to National Geographic, the chemical "can be extracted and used to create natural insecticides that farmers spray on crops to protect them from mites, ants, and aphids without harming anyone's health."

Hyland also pointed out other plants with strong scents that sent snakes packing, including marigold, which is a commonly used snake repellent. "Marigolds release a strong odor that many snakes find offensive, so they will avoid areas where these flowers are planted," Hyland says. Like mums, marigolds do double duty as one of the most popular insect repellants.ae0fcc31ae342fd3a1346ebb1f342fcb

READ THIS NEXT: 6 Plants Attracting Mice to Your Home. 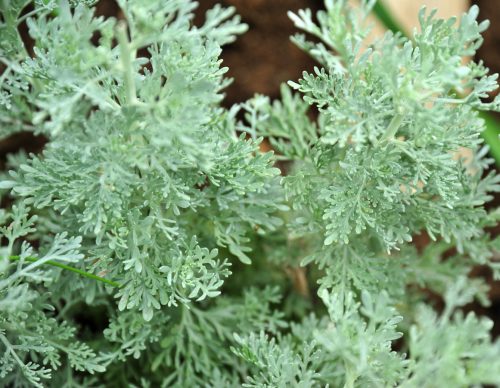 "When building a large garden in an area that is known for its snake wildlife, I always recommend planting wormwood around the edges of the patio or the garden perimeter," Granger McCollough, the founder and CEO of Elite Patio Direct, told Best Life. "Snakes cannot stand the smell of wormwood."

What's more, since wormwood is fairly large—plants can range from two to three feet in size—it can also physically obstruct snakes in addition to offending their sense of smell.

In pesto, on pizza, and in certain summery cocktails, humans love basil—largely because it smells amazing. But snakes, on the other hand, find it repulsive. "Snakes cannot stand the smell of basil," McCollough says. "Basil is also able to grow indoors if your snake problem exceeds your patio or garden." Other herbs that can grow inside or outside and that snakes hate the smell of include sage, thyme, and lavender, according to Hyland.

Ari Notis
Ari is an editor specializing in news and lifestyle. Read more
Filed Under
Animals • News • Pests • Plants
Read This Next
Latest News
Read This Next