Proof that your favorite celebrities aren't just funny on screen.

​Have you ever followed a celebrity on Instagram and, when their photos and videos start popping up in your feed, it almost feels like you and they are besties? It sounds bonkers, we know, but it's part of what makes social media so addictive. You get to know a famous person when they're off the clock, just being themselves and trying to make you laugh. There's a big difference between watching the stars you love get silly on the big screen or on TV—when it's in their financial best interests to to be hilarious—and watching them do it in their own home, when it's recorded on their cell phones and they very well might be wearing sweatpants.

So, without further ado, here are 40 of our favorite Instagram posts from the past year, which are brilliantly funny not in spite of their informality, but in many cases because of it. And for more A-lister social media hilarity, check out ​40 Funniest Celebrity Tweets of 2018.

1
Jimmy Fallon and Lin-Manuel Miranda sing about their goatees.

Be forewarned, this song is a huge ear-worm. We'll be singing it for weeks.

"For today's workout I super set hyper-mini-sprints with ultimate-handsome-power-walking followed by a quick set of victory dance fist. Got the entire workout done in under 20 seconds. Burned probably twohundredthousand calories minimum. #avengers #assemmble For those asking that's #needtobreathe in the background. Coincidentally #needtobreathe is my mantra any time I get on the treadmill." [Video here]

An entire workout in just 20 seconds and he guarantees you'll lose at least 200,000 calories minimum? Sign us up!

And for a deeper look into Hollywood, here are The 50 Top-Earning Celebs of 2018.

He might've wanted to kick the tires a few times on this one before writing a check.

"this hurt my feelings"

Mulaney is the funniest stand-up working today, regardless of what you think about the remarkableness of his pelvis.

And for more A-plus jokes from A-plus jokesters, check out these 50 Amazing Jokes From Comedy Legends.

"My son can't guard me…I put him in a blender…my handle is disgusting!!!!" [Video here]

It's almost like this kid has never played street ball before. "He can't guard me," Kevin says triumphantly.

6
Leslie Jones has some questions about Shape of Water

If we had our way, we'd watch every movie with this Saturday Night Live superstar.

7
Jake Johnson would like you to stop texting him.

"Please STOP texting this kinda stuff to me @iammaxgreenfield It makes me feel uncomfortable. The show is over man."

Though he loved his time on the hit show New Girl, he'd really appreciate it if his former cast-mate Max Greenfield stopped with the creepy texts.

"NO ONE CAN KEEP US APART @jeffgoldblum LOVE FINDS A WAY"

Our favorite part of Parks and Rec (and so many fantastic movies since then) has found her soulmate, and it's apparently a gigantic Jeff Goldblum statue in London.

And for some non-sarcastic, totally surprising celeb relationships, learn about these 20 Onscreen Couples Who Dated Off-Screen.

9
Billie Lourd does an amazing interpretative dance to Toto's "Africa"

"How do you guys prepare for work? I personally like to aggressively sing and interpretive dance to "Africa" by Toto even though I know none of the official words?! #becomingmallory #fracesconroyismyjoy" [Video here]

The Scream Queens and American Horror Story actress has the best warm-up routine. 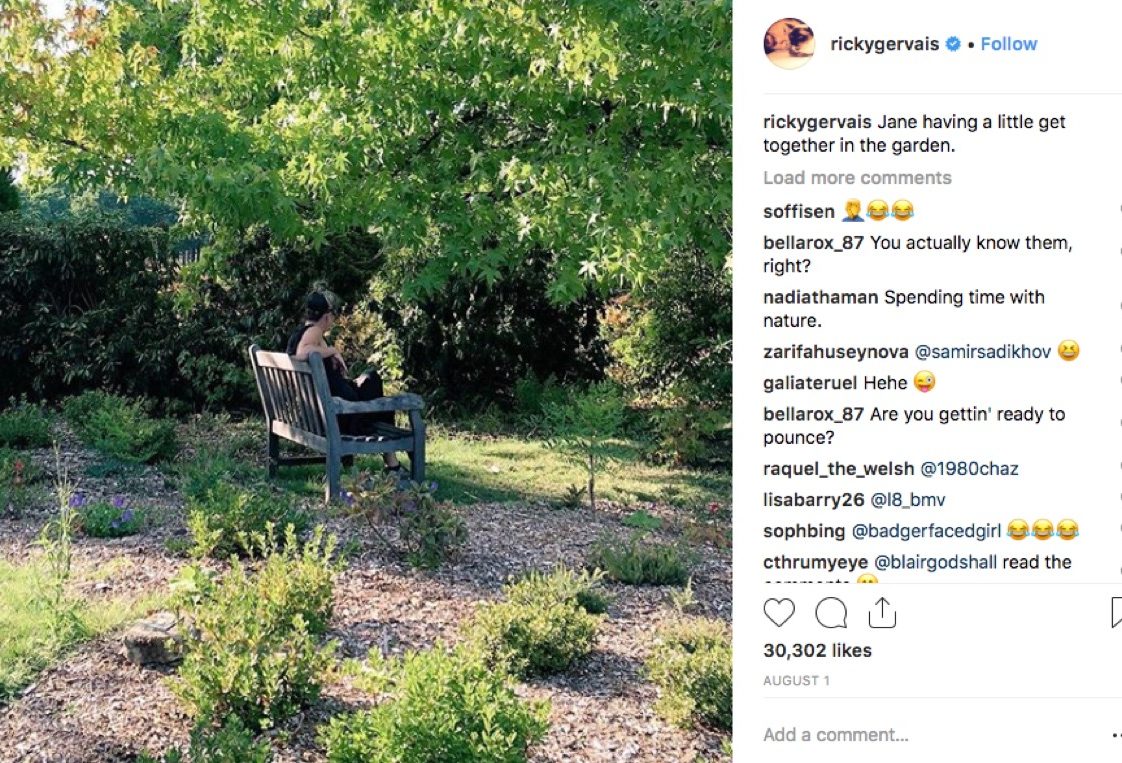 "Jane having a little get together in the garden."

It's so mean that it's kind of funny. Hopefully Mrs. Gervais agrees, and is already plotting her revenge.

"I'm really into the whole tiny sunglasses trend. Thanks for you support everyone!"

He may be onto something. Go ahead and laugh, but we'll all be wearing $200 tiny sunglasses next year.

"I went to the UN and they gave me a binder and a train! The guy in red thinks it's a big deal too. @thevampireswife"

She walked away with a binder and a toy train? That's some pretty sweet swag. Just one more way it pays to be a celebrity.

13
Chrissy Teigen learns how to use GIFS

Let's just say her hubbie John Legend was likely not expecting a visit from President Trump while shirtlessly rocking his baby.

14
Anna Faris is trying to be more active on social media.

"I'm supposed to be more active on social media- so in my 15th attempt, this is the best I've got- please go see my movie #overboardmovie- I love you"

She's such a good actress, we almost believed this was a real pose and Faris was seriously attempting to seem more casual and approachable. It's like the worst Facebook profile photo of that old friend you haven't seen since high school… except meant ironically.

15
The Backstreet Boys as… the Spice Girls?

"Celebrating all of the girl power that's kept us going for 25 years. #SpiceBoys #BSBCruise2018"

I'll tell you what I want, what I really, really want. An entire tour of these guys dressed in drag singing nothing but Spice Girls songs.

16
Busy Philipp's daughter is not sure if she trusts her mom's ability to operate a jet ski.

"Sometimes I forget what it must be like to be my kid. (Btw, she approved this post)"

Sorry, Busy, but we have to take your daughter's side on this one.

"My arms look good in this picture. I have no idea who this baby is. Happy Pride!"

Hopefully the parents find their baby. But to Eichner's point, his arms do look jacked in that photo.

18
Kristen Bell loves a guy who can fix a toy bike.

And there's also the matter of that book next to the tools. How exactly is that workshop appropriate?

For more on Hollywood's most loving couple, Here Are Kristen Bell and Dax Shepard's Secrets to Marital Bliss.

"Safe to say whoever wins the AMA for fav pop/rock album will be an artist who writes songs about love and heartbreak. YOU get to decide who it'll be. Vote at the link in my bio @AMAs" [Video here]

All that huffing and puffing makes us agree with Taylor, strumming a guitar doesn't count as cardio

20
Amy Schumer has a beach day with her gal pals.

If you're confused, Amy's the one on the far left, in the stylish sweatpants, dressed like somebody's unmarried aunt with concerns about IV rays.

Dang. Has it really been that long since "late fees" and "please be kind, rewind" was a regular part of our movie-watching experience?

22
Amy Sedaris cooks a meatloaf with eyes and teeth.

We already knew she was a little odd from Strangers With Candy and her new series At Home With Amy Sedaris. But this kitchen creation, well, it's made us seriously consider vegetarianism.

"My boyfriend Randy call this my Mrs. Roper look…he loves knocking on my door."

Not exactly what we were dreaming of during our youths watching Three's Company, but it's definitely hilarious.

24
Jim Gaffigan's son has mayonnaise on a roll.

"As if I had any doubt that I was raising my children to be white trash." [Video here]

What we love most about this is not Jim's question, but the moment of hesitation from his son, as he considers what he's about to do, before finally settling on, "Yeah."

25
Sarah Silverman may or may not be feeling nauseous.

Does she need to throw up? And if so, will it happen in this ridiculous workout outfit that seems like she's posing for a Wheaties cereal box? We have so many questions.

26
Nathan Fillion has lost his hat.

Dear @aircanada, I left a hat on Flight 559 on Thursday night. This hat. In front of 3C under the chair. It is my favorite hat. I filled out the forms, I prayed to the hat gods, I got it in Belgium. Hear my plea. Hat, if you can hear me, I'll never give up on you."

Has there ever been a more heartfelt, emotional plea than the Firefly star writing, "Hat, if you can hear me, I'll never give up on you"?

27
John Mayer on the importance of self-belief, and accessorizing.

"Believe in yourself and accessorize"

We're not sure what's happening in this photo exactly, but it involves green spandex covered in shamrocks, and a tree being embraced unabashedly, by Iron Man himself. Whatever's happening, it's not going to end well.

29
Olivia Munn remembers the Christmas tree fence of her youth.

#fbf to the weird fence around the Christmas tree our parents used to keep us from touched the presents even though we never would've dared because my super scary Tiger Mom had supersonic hearing and could hear if we even breathed on an ornament. Long story short, there was a lot of trust in the family."

We're not sure if this is funny or sad. Okay, it's mostly funny. Who puts a fence around a Christmas tree to keep kids from touching the ornament? Olivia Munn's parents, apparently.

30
Brad Paisley shows us how to "cry pretty."

"Can't cry pretty? We'll just see about that. I beg to differ – @carrieunderwoord … I can #crypretty" [Video here]

According to Carrie Underwood's hit single, you just can't cry pretty. But country superstar Paisley shows her just how wrong she is.

31
Liam Hemsworth isn't sure how to get his wallet from under a bull.

"My massive mate Eddie. He's laying on my wallet…anyone know how to move a 2500lb bull?"

The Australian actor and Miley Cyrus's main beau is dealing with some serious first world problems.

We don't have any idea what he's talking about either. But the Daily Show host manspreading in an all-white outfit and talking gibberish is our happy place.

Now that she mentions it, what would it take to convince her to actually DO a Britney Spears tribute show? Because that sounds kind of amazing.

34
Mindy Kaling got her face painted at a friend's barbecue party.

"Just an adult woman who got her face painted at a Memorial Day barbecue."

We like honey well enough, but after viewing Garner's footage of raw honey with the "ooooh yeeeeah" song from Ferris Bueller's Day Off, we're suddenly craving it in really unfamiliar ways.

36
Ellie Kemper shows off a PB&J made by Dad.

"If there's a better meal than the PB&J your dad packs for you for your airplane trip, I haven't found it yet. #NotAnAd"

With all the food-gramming we see of elaborate, high-end dishes, it's refreshing to see someone celebrate a timeless culinary classic. Kudos to the Unbreakable Kimmy Schmidt star for reminding us that nothing beats a sandwich made by Dad. (Also, the #NotAnAd hashtag had us rolling.)

We're thinking he'll go with the spaceman in pearls, but who knows, maybe he's in more of a zebra Amazon mood.

"So many incredibe Hulks! #HappyHalloween, all."

We knew eventually the Hulk would settle down, get married, move to the suburbs and have a kid. The green milk is a little surprising, but hey, a baby Hulk wants what it wants.

"The look for the fall is hipster fisherman."

Look out, Brooklyn, you'll all be dressing like this next summer. You've been warned!

40
Chance the Rapper's daughter and Kanye West's son had the best dance party.

"Reunited and it feels so good" [Video here]

With all due respect to Chance and Kanye, we think your kids have you beat on funky dance moves. To see what else happened in pop culture this year, check out the 50 Biggest Pop Culture Moments from 2018.