30 Commercials You Didn't Realize Were Voiced By Celebrities

If you've ever watched a television commercial and felt for sure that you knew the voice-over artist from somewhere, chances are, you're right. While it's nice to imagine that the entertainment industry offers up a never-ending supply of meaty roles for actors, in many cases, commercial work offers a lucrative payday—one untethered to the demands of spending months on a movie set.

However, it's not just newcomers to the industry who keep the lights on with commercial work. Everyone from Oscar winners to the stars of your favorite sitcoms are doing celebrity commercials these days, and often rake in some major cash in the process. So, who's that familiar voice behind your favorite brand's ads? We've rounded up 30 commercials you didn't realize were voiced by celebrities, which might just change the way you watch these ads forever. And for more surprising celebrity roles, check out The 30 Funniest Celebrity Commercials. 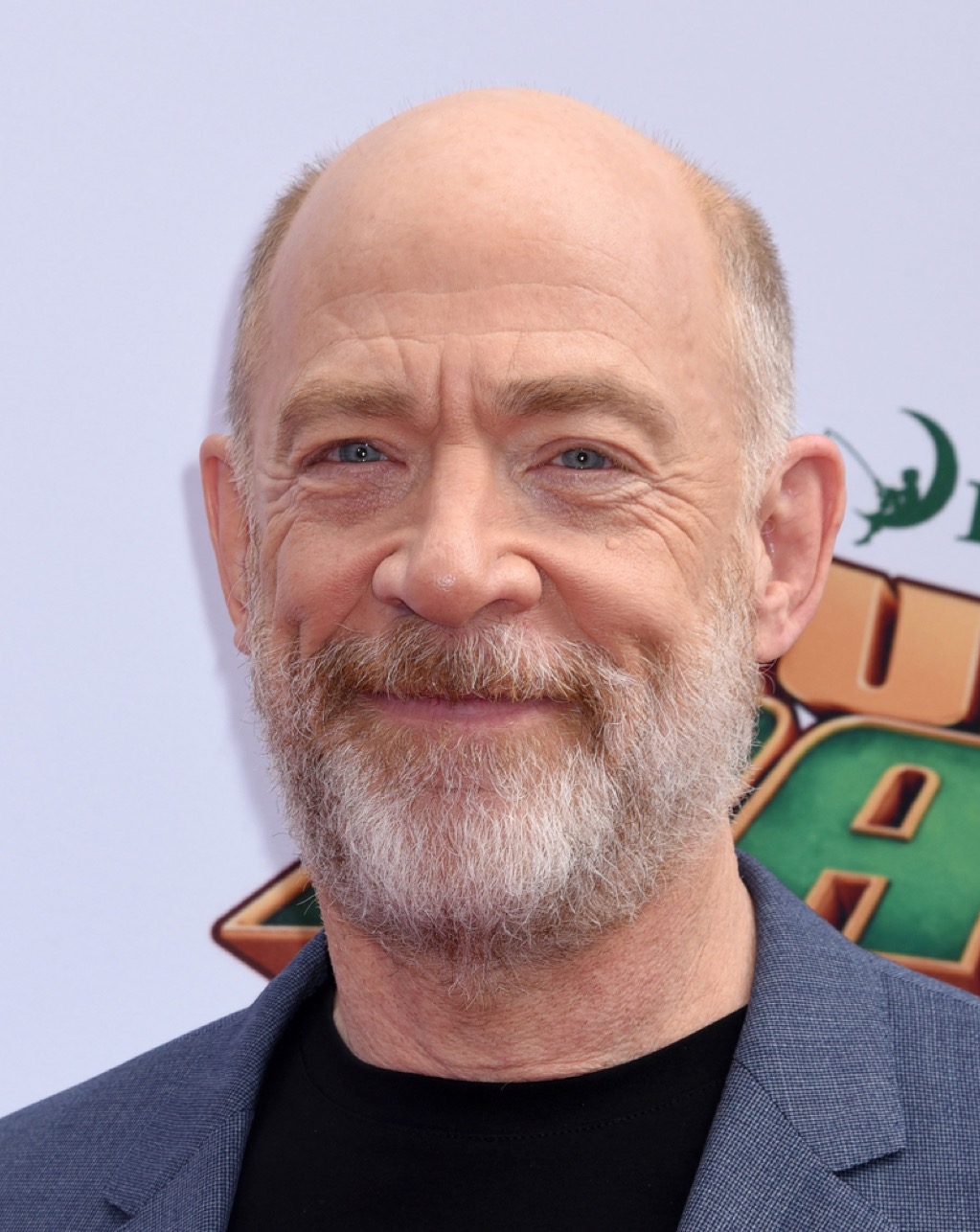 Actor J.K. Simmons, known for his Oscar-winning turn in Whiplash and for parts on hit shows, like The Closer and Law & Order, has a less-well-known role on his résumé, too: voicing the bumbling yellow candy in M&Ms commercials. While Simmons' booming voice is generally highly recognizable, the actor tapped into his skill as a thespian, completely disguising himself as the naïve goofball M&M in both commercials and I Lost My M in Vegas, a 3D movie that can be seen at the M&Ms World store in Las Vegas. And for more celebrity fun, discover the 30 Most Powerful Celebrity Siblings. 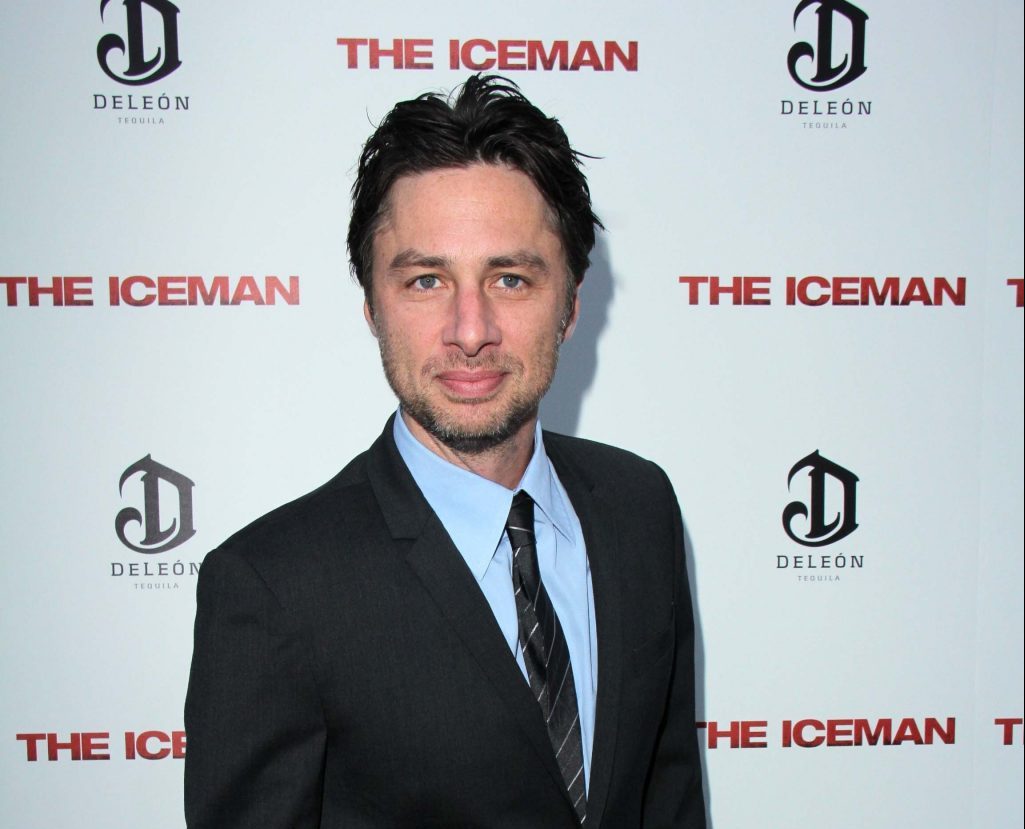 Zach Braff hasn't limited his roles outside of Scrubs to whimsical indie movies. The famous funnyman is also the voice of the puppy in the Cottonelle commercials, voicing all those impressed "oohs" and "aahs" the pup feels the need to give his favorite brand of toilet paper.  If you think that's funny, you'll love The 30 Funniest Things Celebrities Have Said About Marriage. 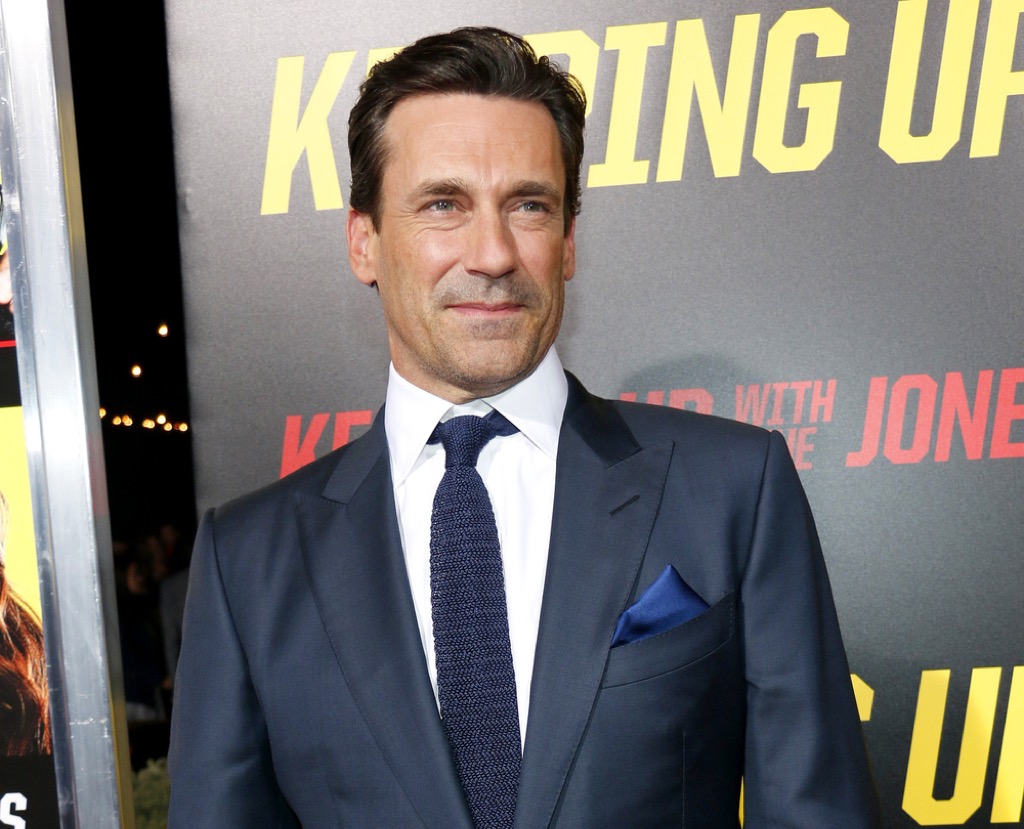 Jon Hamm may be best known for his role as Don Draper on AMC hit Mad Men from 2007 to 2015, but that's far from the only trick the actor has had up his sleeve. Starting in 2010, Hamm scored a plum gig when he became the voice of Mercedes-Benz, lending some gravitas and style to the luxury car's commercials. And for more insight on your favorite celebs, brush up on the 30 Funniest Photos of Celebrities as Teens.

If you felt like the voice in the Walgreens commercials reminding you how much cash you could save with Medicare Part D sounded familiar, you're right. The commercials are voiced by none other than 30 Rock star Tina Fey. However, Walgreens isn't the only company that's gotten Fey in on the commercial act: she also appears in the flesh in a series of ads for American Express. And for more surprising celebrity facts, just wait until you see these 20 Crazy Things Celebrities Have Already Done in 2018.

If you've ever been eager to get a pat on the back for safe driving from a celebrity, Nationwide Insurance has got you covered. Julia Roberts has done a series of reassuring voice-overs for the insurance company, reminding members that if they can stay focused on the road, they'll get a fat check for their conscientious behavior. Boldly going where no man has gone before isn't the only thing on the agenda these days for Star Trek actor Chris Pine. The star is now lending his voice to BMW commercials, like these ads for the company's 3-Series line of vehicles. And for more amusing A-listers, check out The 30 Funniest Red Carpet Moments Ever. 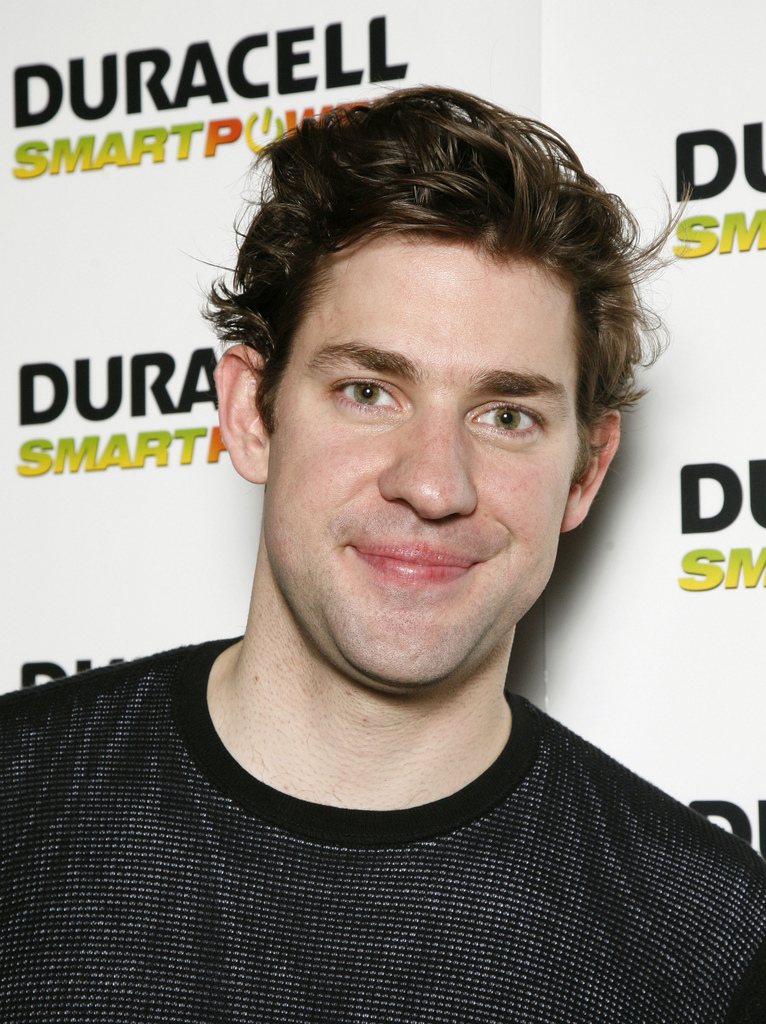 John Krasinski's talents aren't limited to his role as nice guy Jim Halpert on The Office. The Ivy League-educated actor has been doing voice-over work for Esurance since 2012, in addition to actually appearing in a post-Super Bowl spot for the company in 2014.

Paul Rudd's easy charm has made him a box office draw for decades in films like Anchorman and Knocked Up, and apparently, a big hit in the ad world, as well. In 2014, Rudd signed on as the voice-over artist for Hyundai, lending his somewhat anonymous sound to the car company's commercials.

While George Clooney's most famous booze-related endeavor may be Casamigos, the tequila company he co-founded in 2013, the Oscar-winning actor has also lent his voice to a series of Budweiser commercials. In 2005, you could catch Clooney extolling the virtues of the popular American beer, and, somewhat perplexingly, Budweiser's high production cost, too. And for more surprising celebrity roles, discover these 11 Times A-List Celebrities Became Real-Life Heroes.

Morgan Freeman's smooth, deep voice is one of the most recognizable in Hollywood, and that's just what Visa was counting on when they tapped the Oscar-winning actor to do voice-overs for them. However, Visa isn't the only company that's used Freeman's distinctive sound to advertise their products: the 80-year-old actor has also done a series of commercials for the NFL.

Energizer may have their bunny, but Duracell has something even better: Jeff Bridges. The Big Lebowski star has lent his voice to Duracell's "Trusted Everywhere" advertisements, in addition to helming Hyundai's voice-overs before Rudd took on the role. While Will Arnett's recognizable voice has made him a highly sought-after voice-over artist on shows like Bojack Horseman, that's not the only place fans can hear his distinctive sound on the small screen. The Arrested Development star has also lent his distinctive sound to a series of commercials for GMC trucks. In fact, it was because of Arnett's work on the GMC commercials that he lost out on the role of talking car, K.I.T.T., in the 2008 TV movie Knight Rider, a part that ended up going to Val Kilmer instead. If you've ever wondered why the voice yelling, "We have the meats!" at you in the Arby's ads sounded cool, it's because the commercials are voiced by none other than Pulp Fiction and Mission Impossible star Ving Rhames. However, Arby's isn't the only company Rhames has lent his booming voice to: the actor has also done voice-over work for UFC and ads for the NFL, as well.ae0fcc31ae342fd3a1346ebb1f342fcb The bee in the Nasonex commercials' Spanish accent isn't just the work of a talented impressionist. In fact, the commercials are voiced by none other than Spanish actor Antonio Banderas, who has also lent his smooth sound to ads for British department store Marks & Spencer.

Oscar winner Matt Damon may be best known for his work as an action star, but he's also been earning a major payday as the voice of TD Ameritrade since 2012, when he took over for Grace & Frankie star Sam Waterston. The one thing both spokesmen in common have, other than the job? They both donated the money from the voice-over work to charity. Back in 1999, communications company Qwest tapped Willem Dafoe to lend his unique voice to their commercial in which a man finds himself stranded at a roadside motel offering little in the way of amenities—with the exception of every movie ever made on TV, thanks to Qwest. However, this is far from the only voice-over work on Dafoe's résumé: he's also voiced roles in Fantastic Mr. Fox, Finding Nemo, Finding Dory, and The Simpsons. After years of playing Special Agent Fox Mulder on The X-Files, David Duchovny took on a decidedly less-spooky (and less visible) role. The actor has also been lending his voice to Pedigree commercials, including their tear-jerking ads promoting the adoption of shelter dogs.

While Breaking Bad fans are all-too-familiar with his iconic, albeit vulgar, catchphrase from the AMC hit, Aaron Paul proved he's capable of a more sophisticated tone with advertisements for Cadillac. In 2013, Paul lent his voice to Cadillac's Summer's Best Event, advertising the company's ATS line of vehicles. Allison Janney's character in I, Tonya, may have primarily shrieked foul-mouthed commands at her on-screen daughter, but in real life, the veteran actress knows how to turn on the charm. It's Janney's normally smooth, reassuring voice made her perfect for the voice-overs for health care company Kaiser Permanente's "Thrive" campaign. 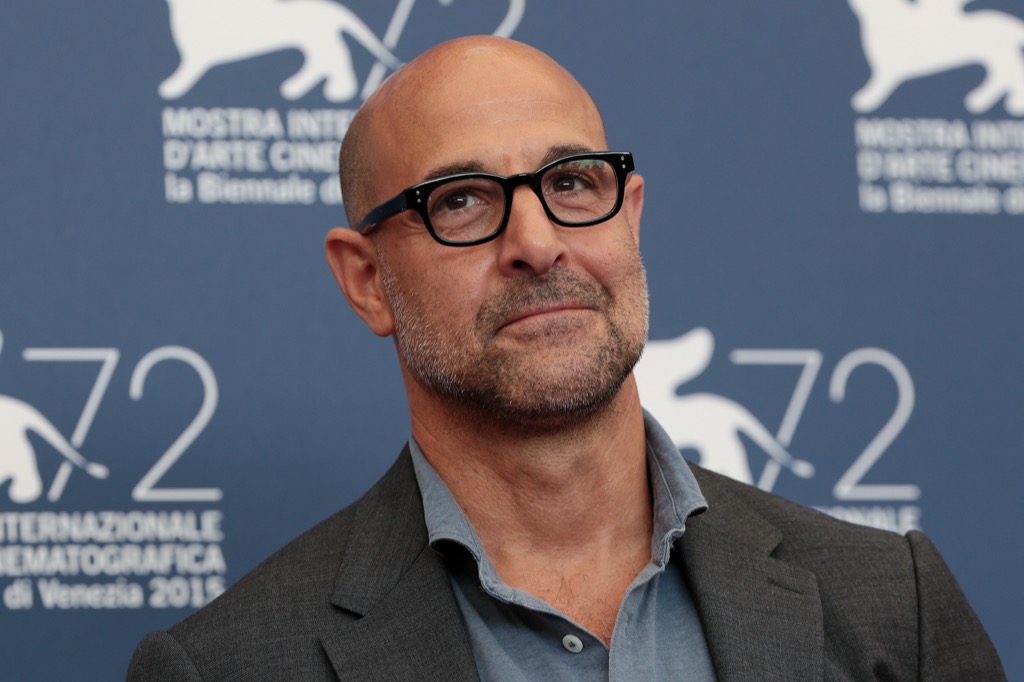 Emmy winner Stanley Tucci may be best known for his dramatic work on the big screen, but he's also got an impressive commercial portfolio under his belt, too. The Hunger Games and The Devil Wears Prada star is the familiar-sounding voice behind AT&T's "Raising the Bar" campaign, rolled out following the AT&T–Cingular Wireless merger in 2004. 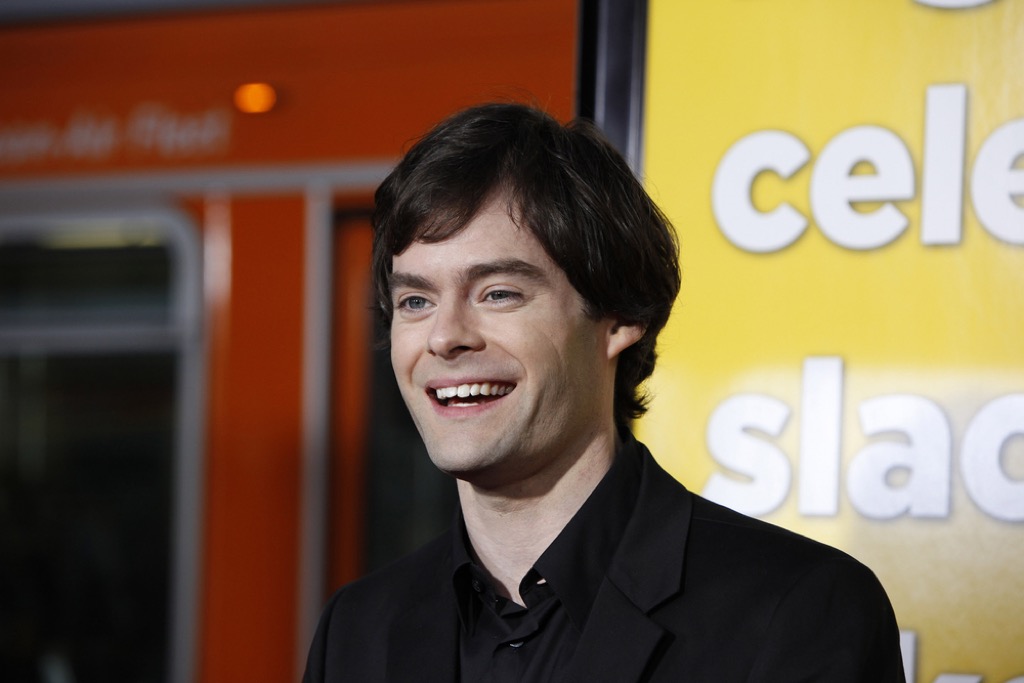 If Mr. Peanut has sounded familiar to you in Planters' recent commercials, there's a good reason for that: the ads are voiced by none other than actor Bill Hader, of SNL fame and Barry acclaim. Hader isn't the only star to voice the monocle-wearing legume, however; Robert Downey Jr. also lent his talents to the role back in 2010. 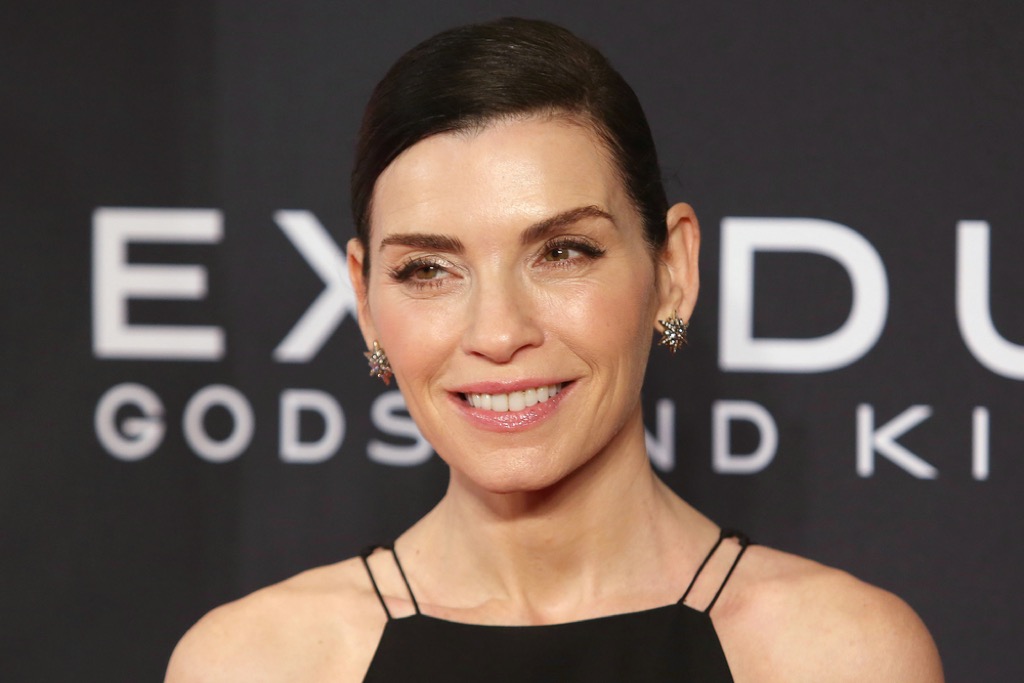 Who's behind that calm, collected voice in the Pampers commercials—you know, the one that sounds like the polar opposite of the harried sounds made by actual new parents? None other than The Good Wife star Julianna Margulies.

John Goodman has been doing voice-over work for animated movies and TV shows for years, working on everything from Futurama to Monsters, Inc. to The Princess and the Frog. However, his most recognizable voice-over role is for Dunkin' Donuts' "America Runs on Dunkin'" campaign, for which he's been providing voice work since 2007. If you've ever wondered why those Tylenol ads telling you to ride your bike, go swimming with your grandkids, or run a 5K are so convincing, it might just be the star behind them. Actress Susan Sarandon has been providing voice-over work to the pain relief brand for years, prompting a wave of threatened boycotts in 2016 after Sarandon made some disparaging comments about Hillary Clinton supporters. 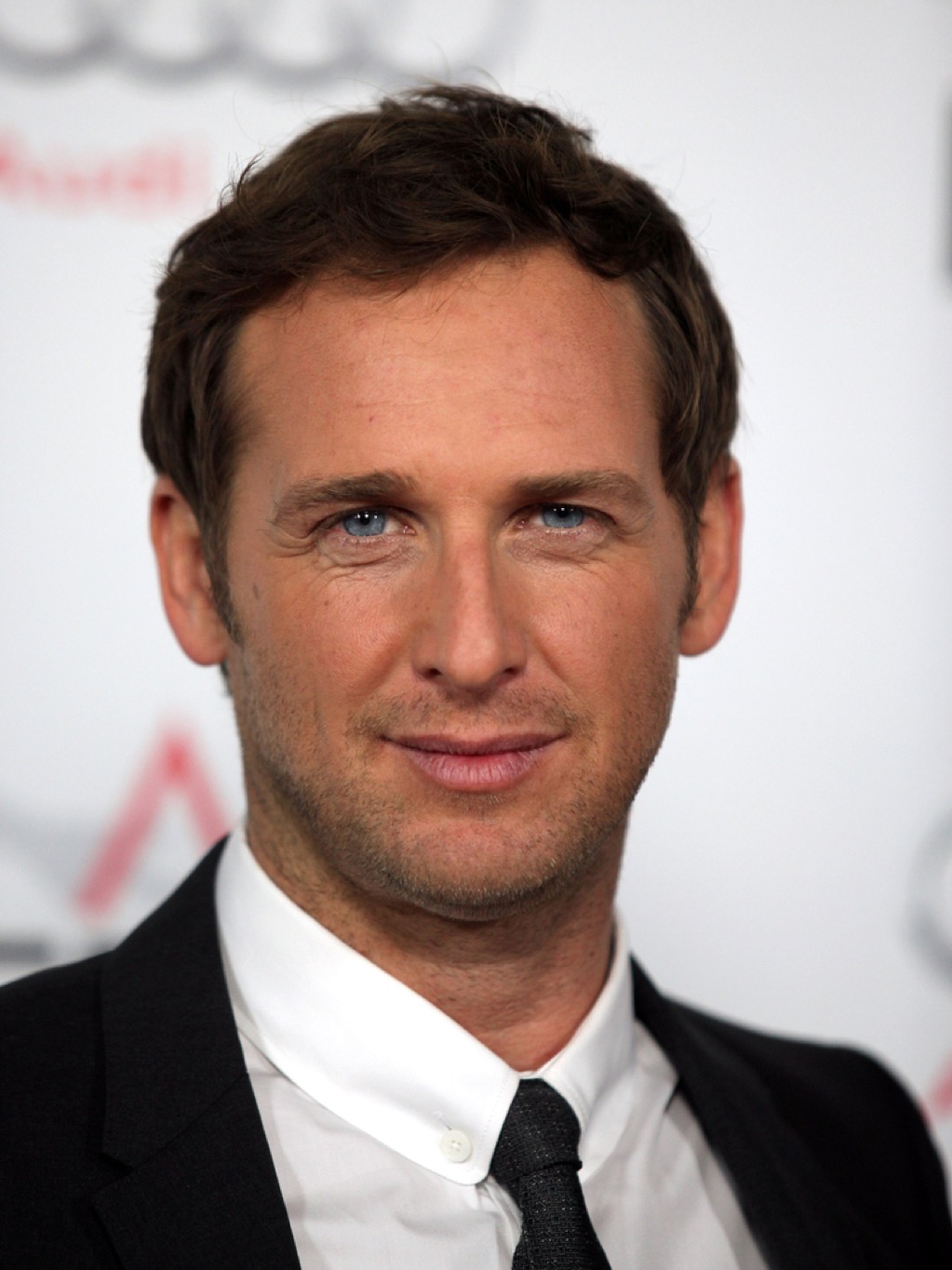 Have you ever felt inspired to pick up a paintbrush after hearing a Home Depot commercial? Well, you can blame the dulcet tones of Sweet Home Alabama star Josh Lucas. However, Lucas isn't the only star who's shilled for the home improvement giant: before he landed the gig, Home Depot's previous spokesmen included industry legends Ed Harris and Gene Hackman.

Those Pure Michigan commercials that make it seem like the whole state is a paradise are voiced by none other than Tim Allen, who grew up in the Great Lakes State. The Last Man Standing star has been voicing the travel initiative's TV and radio commercials since they first hit the air in 2009. John Corbett's southern charm made a fan favorite on Sex and the City, and, more recently, the actor has lent his West Virginia accent to commercials for Applebee's. However, that's not Corbett's only recognizable voice-over role: he's also been one of the voices of Walgreens since 2012. If you've ever wondered why you've felt a sudden hankering for episodes of Living Single and Pizza Hut at the same time, the reason is obvious: rapper/actress Queen Latifah was the voice behind the pizza chain's commercials for years. With seven years playing a blood splatter expert and serial killer on Dexter under his belt, Michael C. Hall must have seemed like a perfect choice for Dodge's surprisingly dark "Leader of the Human Resistance" commercials. After all, who would be better than Hall at delivering lines like, "An unmanned car driven by a search engine company—we've seen that movie: it ends with robots harvesting our bodies for energy"? If you've ever gotten "Smelly Cat" stuck in your head while a Yoplait commercial played, you're not alone. The yogurt brand's "It Is So Good" commercials are voiced by none other than Friends star Lisa Kudrow, who has been doing voice acting for years, including a recent recurring role on Netflix's animated series Bojack Horseman. And for more wild celebrity info, check out the 20 Craziest Celebrity Rumors of All Time.

Sarah Crow
Sarah Crow is a senior editor at Eat This, Not That!, where she focuses on celebrity news and health coverage. Read more
Filed Under
Celebrities • TV
Read This Next
Latest News
Read This Next