As it turns out, many Avengers share a superpower: The Fountain of Youth.

Father Time declares: When you get older, you look older. For the most part, this rule is ironclad. But as with all things, there are a few exceptions—though that rate is far higher among the denizens of Tinseltown. Need proof? Just look at the slate of Marvel heroes: Many of these folks are well into their 40s and beyond yet still rock bodies that look like they're made of (and could punch through) concrete.

But landing a role as a spandex-rocking hero—or as any character to grace the silver screen—won't magically turn back the clock on aging. No, these leading lads and ladies have put some serious work into staying as sprightly as possible. And in the interest of spreading the wealth, we've cobbled together their 20 best secrets here. So read on and prosper. And for more inspiration from head-turning A-listers, be sure to check out What Celebrities With Perfect Bodies Do Every Day.

Yes, as tough as it is to believe—due to the fact that he has the washboard abs and rippling deltoids of a man half his age—Chadwick Boseman is 41 years old. Black Panther himself maintains this enviable physique by dedicating three days each week to HIIT circuit training and two days to martial arts training, particularly capoeira and jiu-jitsu. In fact, earlier this year, he teased a dancelike fight-training routine on his Instagram. 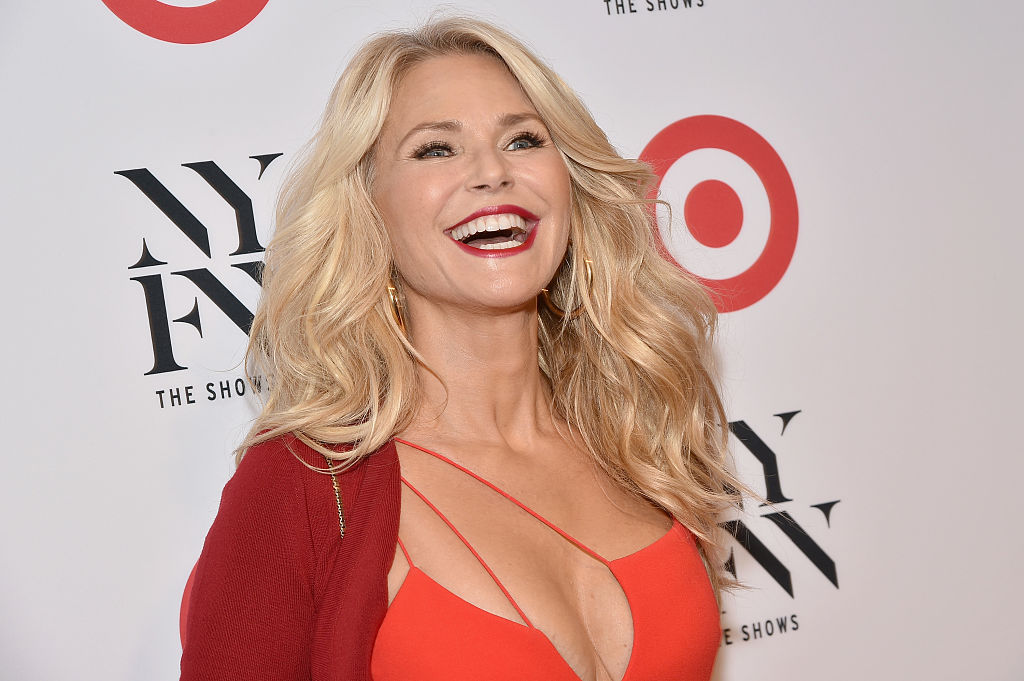 To this day, Christie Brinkley looks like she stepped out of the legendary red Ferrari and into the Fountain of Youth. Her secret? Fruits and vegetables, all blended together. "My simple trick is to start each day with a with a juice of a different color," she told Eat This, Not That!. 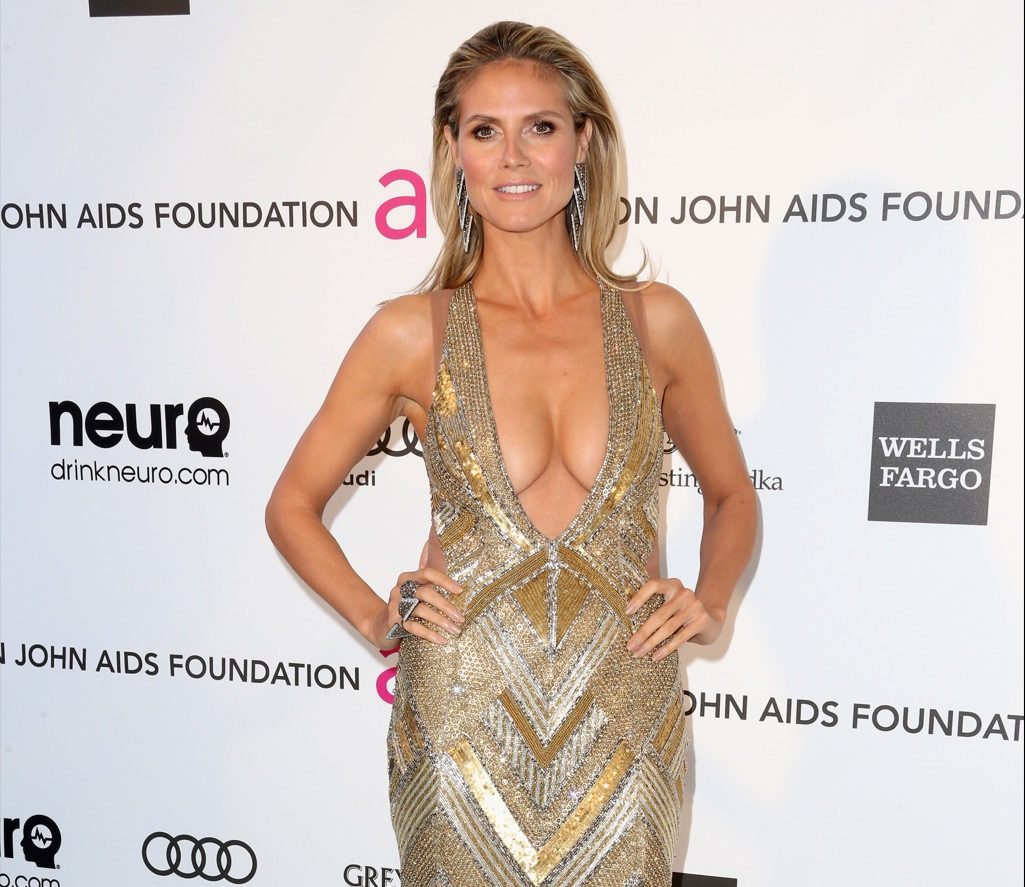 Heidi Klum's secret for maintaining her eternally sprightly glow is simple: She sleeps—a lot. About 10 hours each night, in fact. "I go to sleep pretty much when the children go to sleep," she told Hollywood Life. To get as much shuteye as everyone's favorite supermodel, be sure to master the 11 Doctor-Approved Secrets for Falling Asleep Faster.

Let's put it this way: Jeff Goldblum is the same age as Mickey Rourke and John Goodman. And it's just the simple things that have allowed him to age so much more gracefully than his peers. "I just get a good night's sleep. I wash my face with soap. I like to work out a little bit. I try to eat right. I've stayed clean. I don't really drink or smoke," he told GQ. "I try to keep my perspective wholesome." 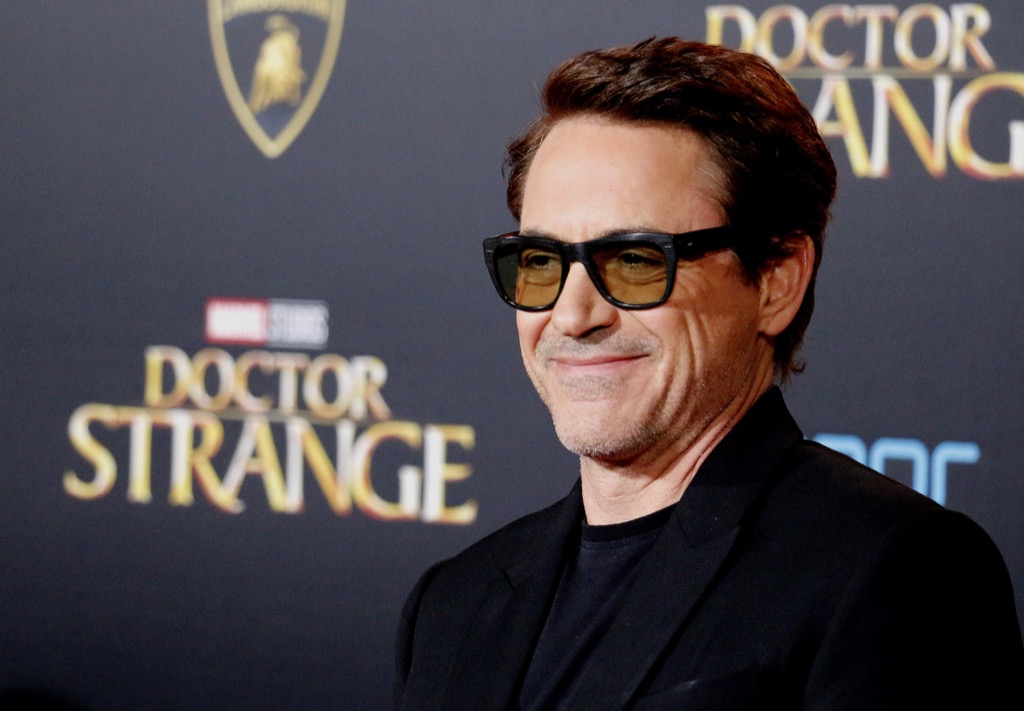 He hasn't done it yet, but there's no doubt that Iron Man himself could complete an Ironman triathlon: After all, Robert Downey, Jr., is in impeccable shape. In addition to a highly specific diet—30 percent protein, 30 percent fat, and 40 percent carbs, according to Men's Fitness—the leading Avenger practices Wing Chun, Bruce Lee's martial art of choice, on a daily basis.

Folks, Paul Rudd literally doesn't age. In fact, the folks at Vulture ran a quiz wherein you had to view photos of Paul Rudd in his 20s and in his 40s and guess which was the older one. (Warning: It's quite difficult.) His secret, however, is surprisingly banal. "I am a big believer in sunscreen," he tells InStyle.ae0fcc31ae342fd3a1346ebb1f342fcb

Goldie Hawn (L) may be 71 (yes, really), but she maintains the vigor of someone far younger by making sure each and every day includes at least one workout. Hawn told People: "I'm a dancer, so I can't stop moving." So she hikes, bikes, runs—anything to get the blood moving.

Yes, we also find it impossible to believe that Winona Ryder is 46. Another impossible-to-believe fact? Ryder maintains her impermeable agelessness by using lip balm and sunscreen—and nothing else. Between Ryder and Rudd, jeez, now might be a good time to invest in some sunscreen.

He may have looked practically geriatric in this year's Logan, but underneath the facial hair and top-tier acting, Patrick Stewart is an ageless gem. Stephen Colbert once accused the guy of being a time traveler, on account of the fact that Stewart seemingly hasn't aged a day in 35 years. After vigorously denying both being a time traveler or one of those jerks who consumes the blood of virgins, Stewart detailed how he does it: "Clean living [and] clean thinking in every aspect of my life keeps my flesh—my skin—toned." It's not rocket science, folks. 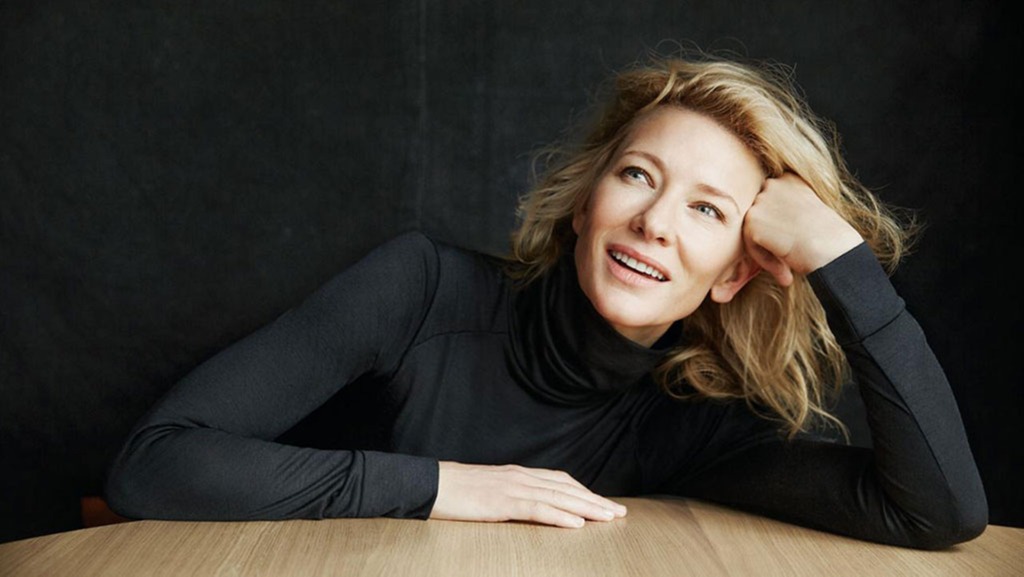 Boseman, Downey, Jr., Rudd—you could be forgiven for believing that signing a Marvel Cinematic Universe contract is a bona fide holy grail. But Cate Blanchett's secret has nothing to do with film contracts. No, her trick stems from a skincare contract. For the past 13 years, Blanchett has used SK-II facial masks, which she credits for her eternal youth. Normally, we'd be skeptical of such blatant product endorsement, but just look at her. You can't argue with results. 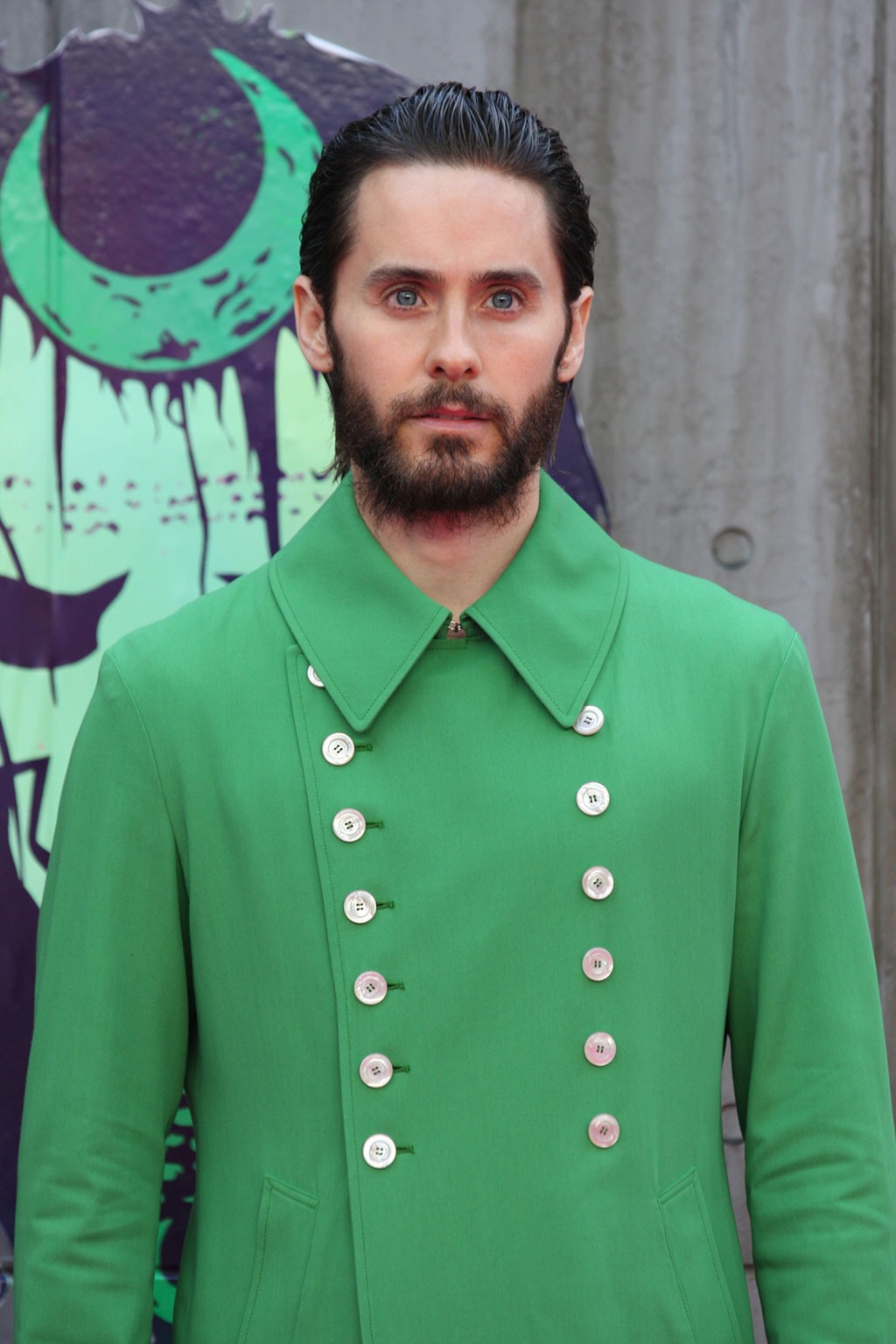 Jared Leto is acutely aware of how ageless he is. In fact, he actually posted a side-by-side shot on Instagram, wherein he looks identical in a photo from 2008 and one from 2016. "Amazing what a little human blood will do," he quipped. But when asked seriously about his actual anti-aging secrets, however, he clarified that a regular and healthy sleep schedule is the trick. 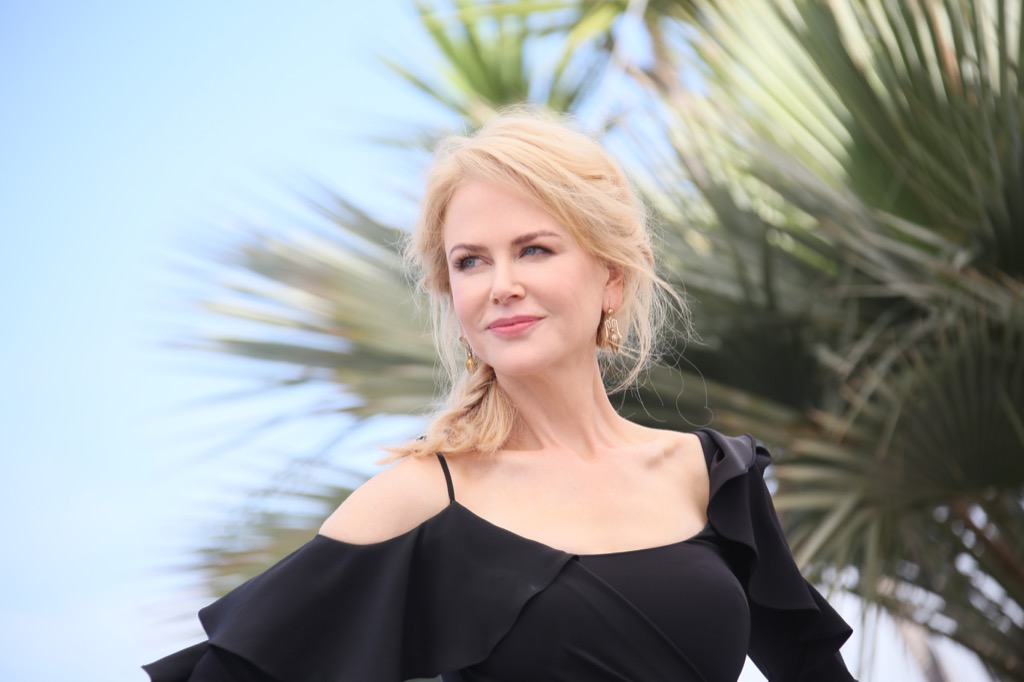 Nicole Kidman has a porcelain complexion so smooth it belongs in a museum. Her secret? Sunscreen. (Yes, another proponent of the stuff…) "Protecting your skin is really what stops you from aging," she told Refinery29.

Ageless wonder Brad Pitt's secret is all in his diet. He eats mainly foods that are loaded with omega-3s (like salmon and chia seeds), to fight wrinkles, and phytoceramides (like beets and brown rice), to keep his skin hydrated. Pitt also indulges in eggs and lean meat, to get a healthy dose of amino acids, which help combat damage to skin cells. To turn your own diet into a de facto fountain of youth, try eating more of The 20 Best Anti-Aging Superfoods Ever.

Julia Roberts, the "World's Most Beautiful Woman" of 2017, as anointed by People, somehow looks exactly the same as she did when she first won the honor, in 1991. (She's won the title a record five times, for what it's worth.) Her secret? It's all in the diet: lean proteins, like salmon, grilled chicken, and eggs; healthy produce, like berries and avocados; and complex carbs, like brown rice. Roberts is also sure to drink at least eight glasses of water each and every day. And if that's not convincing enough, here is proof that Julia Roberts is an eternal goddess. 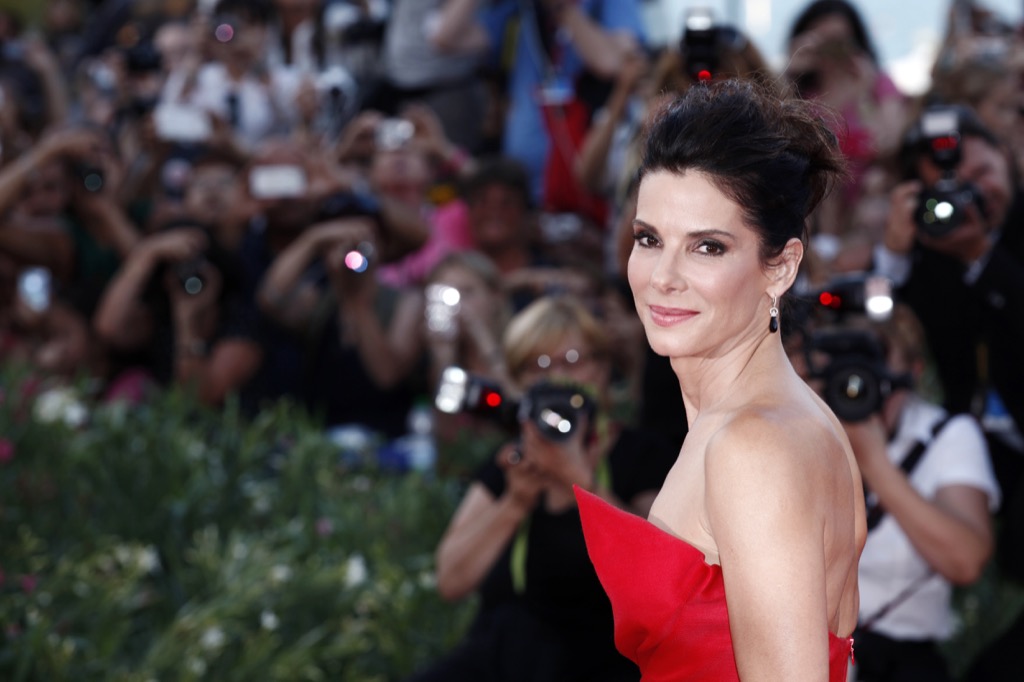 Here's a modest proposal, and we're sure you'll agree: Sandra Bullock looks exactly the same as she did in The Proposal, which came out eight years ago. Bullock maintains her youthful essence by maintaining a dedicated exercise regimen—except she has a little trick. Instead of sticking to the same routine, Bullock switches things up every six to eight weeks, so her body never gets used to the workout. 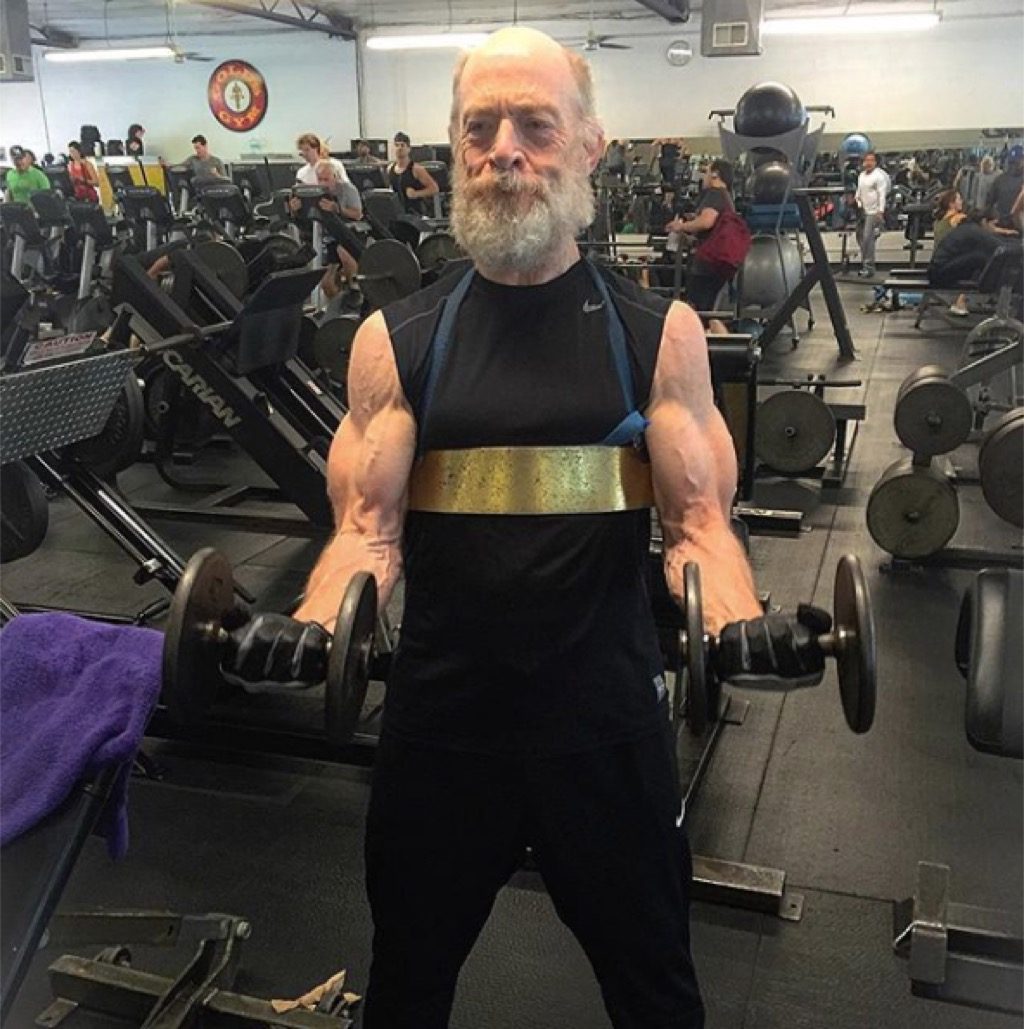 Sure, the guy may be a cue ball—not exactly the spitting image of vim and vigor—but have you seen J.K. Simmons lately? Folks, the man is jacked. Those are not the biceps of a 62-year-old man. (We got whiplash double-taking at this image.) Simmons transformed his body through a traditional weight lifting routine: bicep curls, military presses, that sort of thing. His trick, however, is dedication: Simmons is sure to hit the weights at least four days per week. 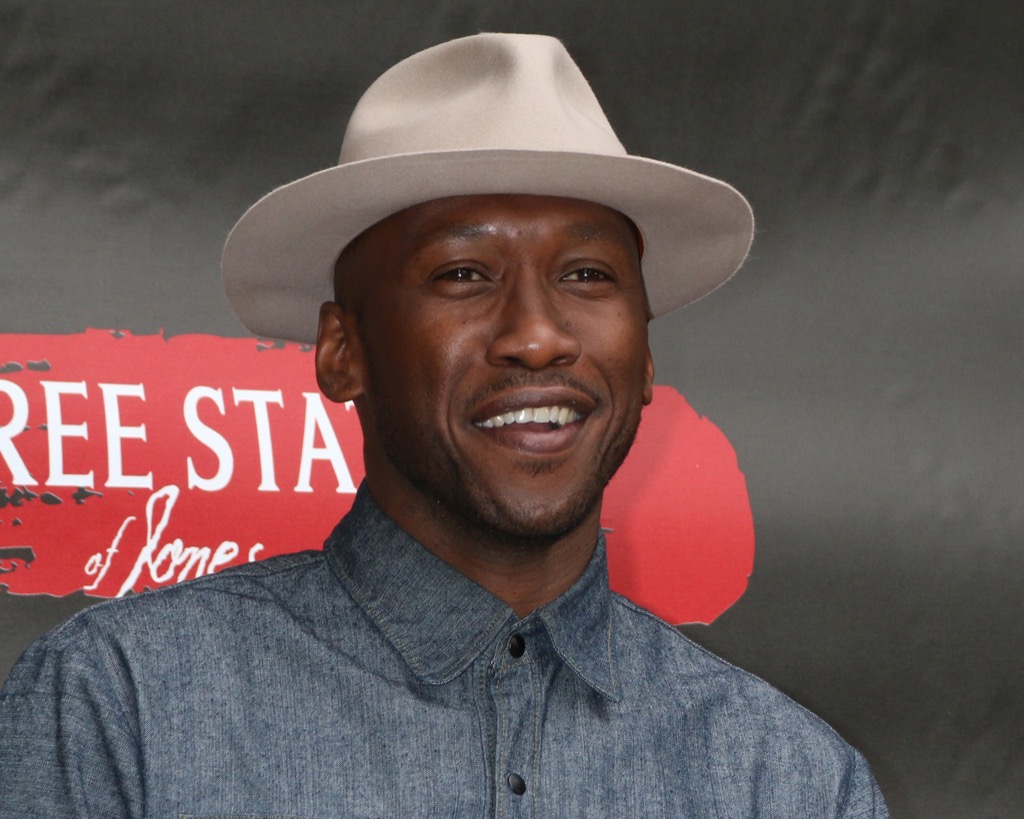 Moonlight and Luke Cage star Mahershala Ali's abs are so age-defying they landed him a gig typically reserved for men half his age: The Calvin Klein underwear campaign. (Mark Wahlberg and Justin Bieber were both 21 when they first graced the billboards.) According to an interview with WebMD, Ali maintains his eternal eight-pack by avoiding red meat and dairy and slating in as much cardio as possible, even on his day-to-day: Ali gets around by riding a bike.

Matthew McConaughey keeps his skin looking spry by making good use of sunscreen. (At this point, we're convinced sunscreen is the elixir of life.) However, the former Sexiest Man Alive doesn't use just any old SPF. As he told Marie Claire UK, he springs for creams that include menthol; apparently, menthol-based products are less greasy and get absorbed by skin easier. To fight aging skin on your own, be sure to learn the 20 Easiest Ways to Eliminate Wrinkles For Good. 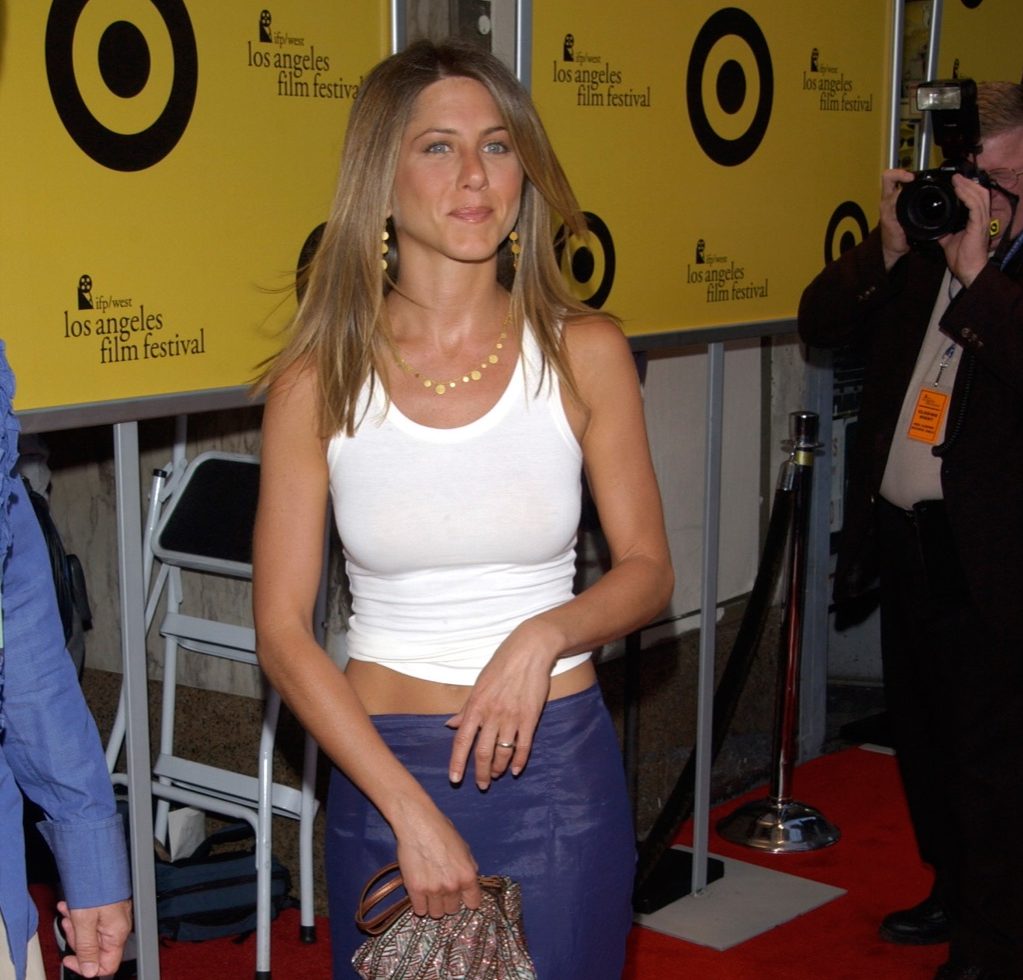 The original anti-aging goddess swears by two simple tricks: Drinking a lot of water and "getting proper sleep," as she told Elle, which… Look. Sure, hydration and rest are essential, and can shave years off one's visage, as Klum and Leto clearly prove. But 15 years is a stretch. Yes, this photo is from 2002. (And you thought it was taken this year…) In any case, this snapshot can only mean one thing: Jennifer Aniston has some dirt on Father Time. There's simply no other answer.

For more advice on living your best life, sign up for our newsletter now!

Ari Notis
Ari is an editor specializing in news and lifestyle. Read more
Filed Under
Aging • Celebrities • Skin and Face • Skincare
Read This Next
Latest News
Read This Next