23 Bikinis That Changed Everything

All hail the power of the two-piece.

At a pool in Paris on July 5, 1946, the world got its first glimpse of the two-piece bathing suit. The tiny garment was invented by French designer Louis Réard and modeled by dancer Micheline Bernardini. Today, that groundbreaking fashion moment has its very own holiday: Bikini Day, held on July 5th. To celebrate, we've rounded up all of the paradigm-shifting bikinis of the past 70 years.

From the then-scandalous two-pieces worn by the original Bond girls to the gold and glimmering ensemble Princess Leia rocked on Tatooine, these are the 23 most important suits.

Nude dancer Micheline Bernardini was the first woman to wear a bikini in 1946 at the Piscine Molitor swimming pool complex in Paris. The bikini, designed by Louis Réard, was so small that Bernardini could fit it into a matchbox, like the one she is pictured holding here.

One year after Brigitte Bardot became one of the first women to don a bikini in a feature film in 1952's Manina, the Girl in the Bikini, the actress brought attention to her curves once again at the 6th International Cannes Film Festival, when she a wore a barely-there floral bikini to the beach. From that point on, women all over the world began paying more attention to the two-piece.

3
Marilyn Monroe in Something's Got to Give

Marilyn Monroe's last project, 1962's Something's Got to Give, didn't go very well for the actress, who was eventually fired for her on-set antics. While the movie never made it to the big screen, it did leave us with one of the most iconic photographs ever taken: Monroe in heels, a two-piece, and a fur coat.

4
Ursula Andress in Dr. No

The original Bond girl, Ursula Andress, proved to the world that a woman could simultaneously look amazing in a bikini while kicking some serious behind. In what became one of the most iconic moments in cinema, Andress rose out of the Caribbean wearing a white bikini, with a knife on her left hip. Since its release in 1962, multiple films have tried to recreate this famous moment—even later Bond movies.

Though Sue Lyon was only 14 during the filming of Stanley Kubrick's Lolita, the scene pictured above, showing Lyon sensually leaning on a towel, clad in a barely-there swimsuit, received a large amount criticism upon its 1962 debut. Many argued that the film was far too indecent—though this bikini scene still reigns supreme as one of the most memorable in movie history.

You can thank actress Annette Funicello for your right to party in a bikini. With the release of Beach Party in 1963, audiences saw Funicello strutting around in her high-waisted bikini without a care in the world—and beach gatherings haven't been the same since.

7
Sally Field in the Gidget series

In the mid-'60s, Sally Field starred as Gidget in the eponymous ABC television show, based on the 1959 movie of the same name. Set in California, the series prominently featured Field in colorful and expressive bikinis, like the one pictured here.

In this 1966 prehistoric drama, Raquel Welch staved off every threat of extinction in this iconic well-placed two-piece made from scraps of cloth, paving the way for many a similarly styled bikini in sci-fi films to come.

In the 1973 thriller Coffy, Pam Grier dressed to kill (and, er, actually killed) in her crochet bikini. Even scantily clad, she managed to be a dominating force among a nearly all-male cast.

10
Carrie Fisher in Star Wars: Episode VI—Return of the Jedi

Carrie Fisher's futuristic bikini didn't leave much to the imagination in Return of the Jedi. Though Fisher's outfit became a cultural obsession after the movie was released in 1983, she spent most of her time in it feeling completely self-conscious of her figure. "When [director George Lucas] showed me the outfit, I thought he was kidding and it made me very nervous," she told NPR.

With "the most memorable bikini-drop in cinema history," according to Rolling Stone, upperclassman Linda Barrett (Phoebe Cates) and her red bikini became full-blown high school legend. In the scene, Linda slowly exited a pool with water dripping down her body. Suddenly, red bikinis were the summer accessory.

12
Salma Hayek in From Dusk till Dawn

Salma Hayek became the sexiest vampire ever with this slithering dance number in From Dusk till Dawn in 1996. Though her two-piece may have been far removed from any beach, it shined just the same.

13
Angela Bassett in How Stella Got Her Groove Back

More than two decades after the release of How Stella Got Her Groove Back, Angela Bassett is still winning over audiences with her work. But it was this pink bikini that helped make Bassett a household name in 1998.

Actress Gwyneth Paltrow brought this vintage trend to the big screen for her role in 1999's The Talented Mr. Ripley, which was set in 1950s. In the film, Paltrow sported this flirty, fun, but not-so-skimpy bikini, proving that sexy doesn't always have to include baring it all.

The 2000 film Bedazzled, in which Elizabeth Hurley starred as the devil, did not leave any lasting impressions on moviegoers. But more than a decade later, audiences still distinctly remember Hurley's barely-there, bedazzled bikini.

16
Halle Berry in Die Another Day

"I remember that bikini coming out of the water and thinking how beautiful Ursula Andress was," Berry told Time. "I thought, 'Wow! Wouldn't it be great to be like her?'" Dreams sometimes do come true!

Kate Bosworth was the surf hero we didn't know we needed, giving an effortlessly cool performance in 2002's Blue Crush. Bosworth's character was completely fresh-faced and sported only practical swimsuits, which didn't even always match.

At the age of 41, Demi Moore did more than just a rock a bikini in Charlie's Angels: Full Throttle in 2003—she launched a nationwide conversation about age and sexuality. Moore proved that there's no age limit when it comes to having the confidence to strut down the beach in an itty bitty string bikini.

19
Angelina Jolie in Tomb Raider: The Cradle of Life

Angelina Jolie kicked butt and took names in this black bikini in Tomb Raider: The Cradle of Life in 2003. But it wasn't necessarily what she was wearing that made her Lara Croft performance so captivating. "I wanted an actress who was going to bring something to the part, and she brought this great Angelina Jolie mythology with her as this dark, crazy, wicked woman with a very particular and interesting personality," director Simon West told Entertainment Weekly.

20
Rachel McAdams in The Notebook

If Rachel McAdams was a bird, then we all wanted to be birds. The adorable bikini she wore in 2004's The Notebook, pictured above, was not the sexiest, but it spawned a new wave of vintage-inspired swimwear that's still popular today.

21
Jessica Simpson in Dukes of Hazzard

If Jessica Simpson in 2005's Dukes of Hazzard taught us anything, it's that there's never a bad time to sport a hot pink bikini.

Though Queen B wasn't the first African American woman to appear on the cover of Sports Illustrated (that honor belongs to Tyra Banks), her 2007 cover inspired a brand new trend in swimwear. After Beyoncé appeared on the cover wearing a mismatched swimsuit, nearly every retailer adopted this trend—and the days of searching the racks endlessly for a matching two-piece were long gone. 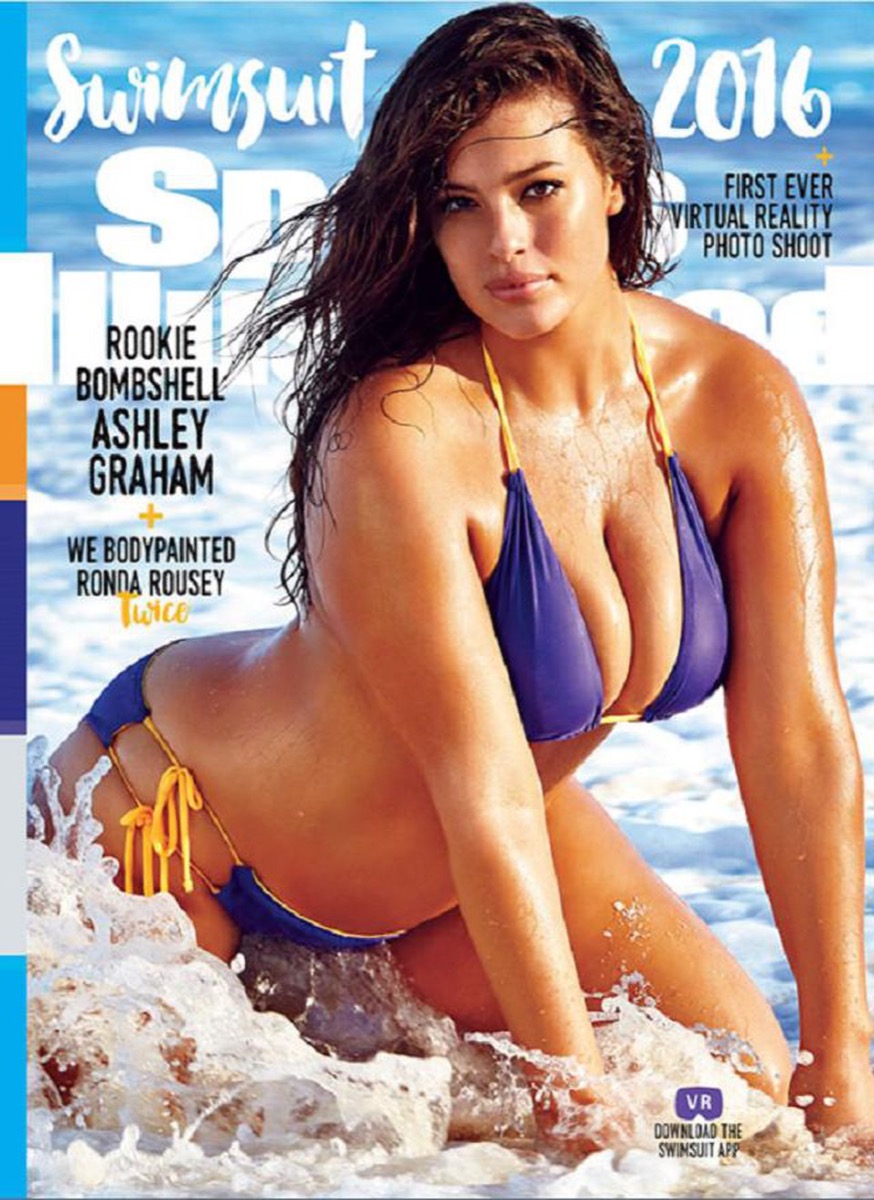 When Ashley Graham made her debut on the cover of Sports Illustrated in 2016, she became the first plus-size model ever to do so. Graham has since pushed boundaries in the modeling world and even wrote a book about her experience in the industry, titled A New Model: What Confidence, Beauty, and Power Really Look Like. And for more ways to celebrate the bikini holiday, check out these 17 Hilarious First Reactions to the Invention of the Bikini.

Ashley Moor
Ashley hails from Dayton, Ohio, and has more than six years of experience in print and digital media. Read more
Filed Under
Celebrities • Fashion • Fun Facts
Read This Next
Latest News
Read This Next