More than 7 in 10 people are more likely to talk to you, a new poll shows.

There are two kinds of people in this world. One group of folks prefer to be as anonymous as possible when moving about their day, avoiding any conversation—or even eye contact—with strangers unless it's entirely necessary. The second group includes people who eagerly strike up a conversation with strangers everywhere they go (sometimes even in the hopes of meeting a possible mate). Wherever you see yourself in this worldview, you're going to want to read on to learn the one thing that makes you far more approachable to strangers—so you can either embrace it as a strategy or run as far away from it as possible!

RELATED: This Is the One Pick-Up Line That Works Every Time, Experts Say.

Nearly three in four people are more likely to approach a stranger walking a dog.

A new poll revealed that, regardless of relationship status, 73 percent of people say they're more likely to approach someone who is walking a dog. OnePoll conducted the research among 2,000 cat and dog owners on behalf of ORIJEN pet food.

Pets help many people get dates, both on and offline.

Almost half (49 percent) of the survey respondents said their pet has been their "wingman" that helped them score the phone number of a potential date.

About two-thirds of respondents (65 percent) said they're even more likely to swipe right on someone who shared pet photos in their dating app profile.

Nearly half of the poll's respondents (48 percent) said they would like to go on a dog-friendly date at a park or a beach.

For more relationship tips sent directly to your inbox, sign up for our daily newsletter.

More than 70 percent of pet parents see relationship red flags in people who don't treat their dogs like family. 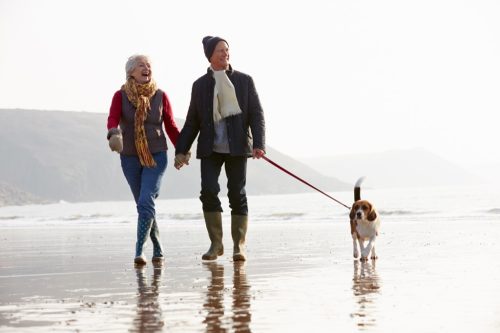 The survey also investigated other warning signs and relationship dealbreakers that single people experience when navigating the dating scene with pets. More than seven in 10 pet parents said they viewed it as a red flag if a potential partner doesn't treat their own pets like family, the data showed. And three in five said that a potential mate who leaves a pet in a crate all day is a major no-no, followed by 52 percent who said they were turned off by pet parents who didn't allow their animals on the furniture.ae0fcc31ae342fd3a1346ebb1f342fcb

Though respondents said pets can attract them to a new relationship, they also acknowledged pets can complicate relationships, too.

Should problems arise in the relationship, more than two thirds (67 percent) of people said they'd try harder to make up with their partner if there were shared pets in the house.

Slightly more than one-quarter of the survey respondents (26 percent) said they would hire an animal behaviorist to help resolve any issues that arose with their pets. And if that seems like a serious commitment, consider just how many pet owners said they prioritize their spending on their pet even more than they do on themselves: According to the data, the average person already spends about $104 a month on their pets' food, and 53 percent said that they spend more money every month on their animals' food than on their own.

RELATED: Doing This Together Led 20 Percent of Couples to Divorce in New Survey.