Genetics isn't the only factor determining your salt and pepper ratio.

While there is practically nothing you can do to prevent gray hairs from sprouting up on your head, there are certainly tell-tale signs to look for that will give you plenty of advanced warning that they're on the way.

Are you constantly stressed? Are you soaking up too much sun? Do you have any lingering thyroid issues?

If you answered yes to any of those, it's a good bet that there will be some salt-and-pepper in your future. So read on to learn all of the surprising warning signs that your hair, like the leaves in the fall, is destined to change its hue. And for some great tips on what to do with your newly gray locks, be sure to know the 40 Things You're Doing That Will Make You Look Older.

1
You're a natural redhead.

Along with blondes, redheads are the most likely to gray (or, in reality, white) early on, since their hair already lacks the pigment.

However, unlike blondes with light hair that can easily disguise newly forming gray hairs, redheads have a harder time disguising their grays, as their hair pigmentation makes it more resistant to hair dye. And for more ways to maintain the perfect head of hair well into your golden years, check out these 40 Ways to Have Your Best Hair After 40. 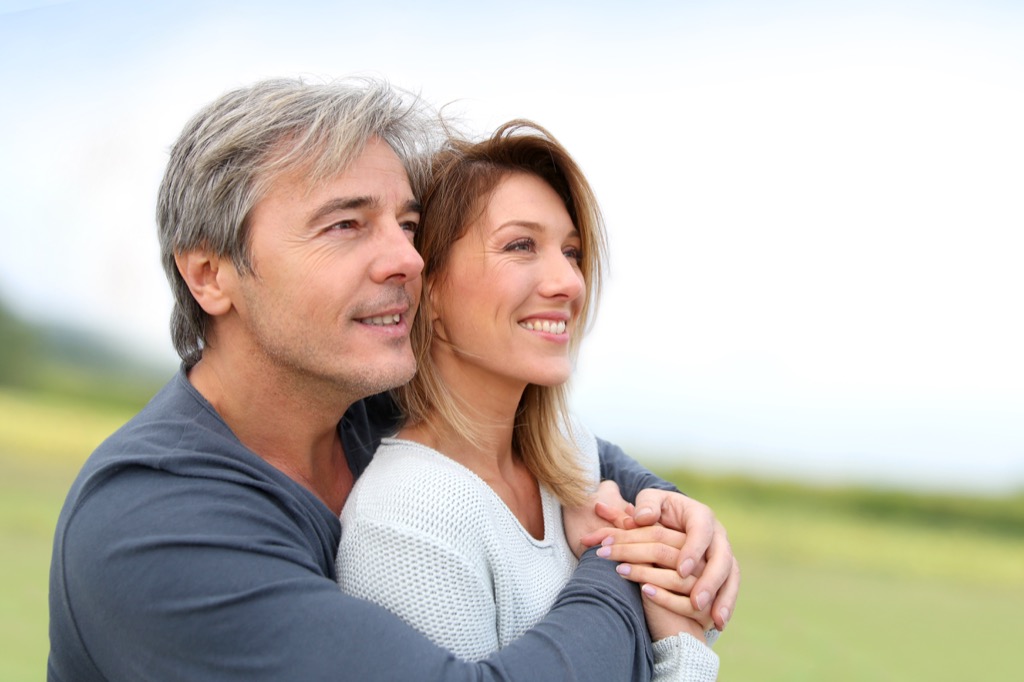 According to Health Magazine, your ethnicity is one of the biggest factors that contributes to the graying process of your hair. Research shows that caucasians develop gray hairs earlier than other races, while Asians are the second and African Americans are the third. For what it's worth, doctors are still unsure about why this pattern occurs.

As Dr. Roopal Kundu, associate professor in dermatology at Northwestern University's Feinberg School of Medicine, told Good Housekeeping Magazine, receiving chemotherapy for any illness can trigger hair loss. But once people emerge from chemo treatments they're hair is far likely to return in shades of gray.ae0fcc31ae342fd3a1346ebb1f342fcb

Though stress itself hasn't yet been scientifically linked to graying, according to Dr. Kundu, the resulting condition from stress, called Telogen Effluvium, is a temporary disruption in the natural growth and rest cycle of your hair, causing your hair to shed excessively.

When you're constantly stressed or struggling with an anxiety disorder, you're more likely to find gray hairs before your more zen peers. Furthermore, there is plenty of anecdotal evidence to suggest that stress is indeed related to the graying process. (See: Time's amazing look into the aging process of U.S. presidents.)

Not so surprisingly, smokers greatly increase the chances of premature graying with their nasty habit, says Marie Jhin, MD, a board-certified dermatologist and director of Premier Dermatology in San Francisco, in an interview with Health.

"If you look at smokers, you can see the wrinkles in their skin. You may not be able to see wrinkles on the scalp, but it's still affecting all the follicles," she said. In fact, according to a study published in the Indian Dermatology Online Journal, smokers are two-and-a-half times more prone to premature graying. And for more great coverage of hair, check out these 15 Top Hair Tips from Top Hollywood Stylists.

6
You're missing key nutrients in your diet.

If you have a poor diet or are missing key nutrients in your current health regimen, then you might be missing a key vitamin—B12—that, according to Dr. Jihn, can help keep your hair healthy.

As it turns out, vegans and vegetarians are the most likely to be missing out on this key vitamin, as it is most plentiful in dairy products, fish, poultry, and meat. To avoid going gray prematurely, either try to maintain a more balanced diet, or, if you're a vegan or vegetarian, take a B12 supplement.

7
You have diabetes, pernicious anemia, or thyroid problems.

Yes, your health condition could also be causing you to go gray. This is especially the case if you suffer from diabetes, pernicious anemia, or thyroid problems, as these illnesses are known for directly attacking your hair follicles, says a study conducted by the Universidad Peruana Cayetano Heredia in Lima, Peru. In fact, hair follicle damage is shown to be one of the early markers for type 2 diabetes.

8
You're failing to care for your scalp. 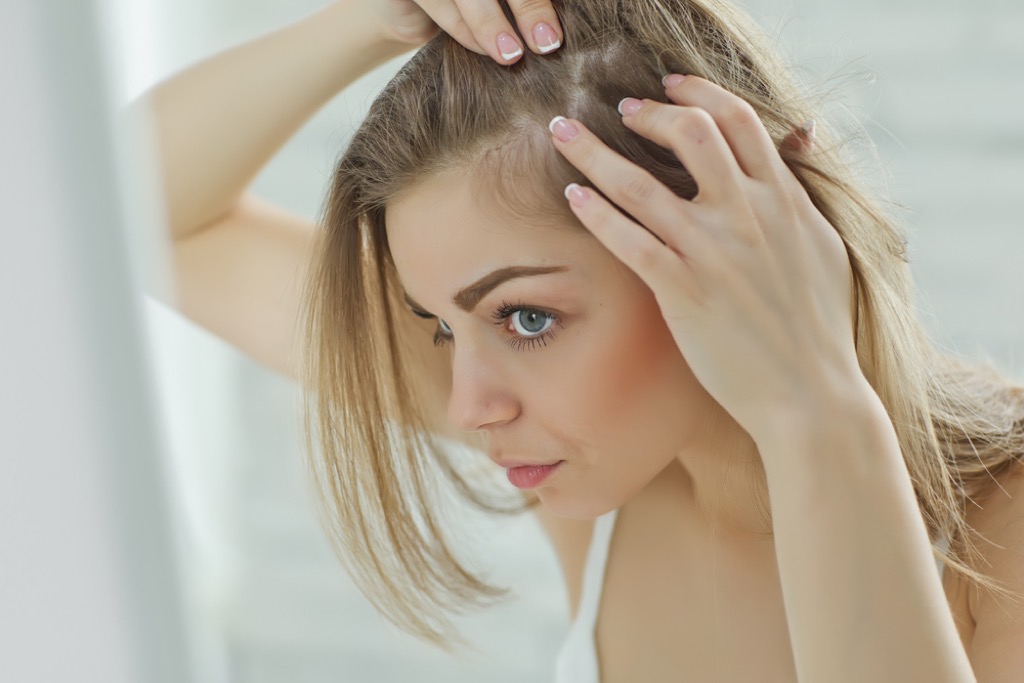 In general, you should try to take care of your hair every day, making sure that it's hydrated and healthy. As trichologist Madeleine Preston told Cosmopolitan Magazine, shampooing and massaging your scalp on a daily basis can also bring "vital nutrients to the scalp via the blood supply and feeding our follicles." While failing to do this won't exactly result in a head full of gray hairs tomorrow, it can keep your follicles healthy, vibrant, and armed against the coming grays.

Despite efforts to maintain a healthy lifestyle, gray hair may soon be an inevitable part of your appearance if your parents or other relatives went gray early on in their lives.

According to Preston, "Grey hair is an inherited trait—if your parents went grey early there is a possibility that you will, too."

In a study published in Nature Communications, researchers even found the primary gene involved with premature greying—IRF4. This gene is in charge of regulating and producing melanin. When your body starts producing less melanin, it causes your hair to turn gray. 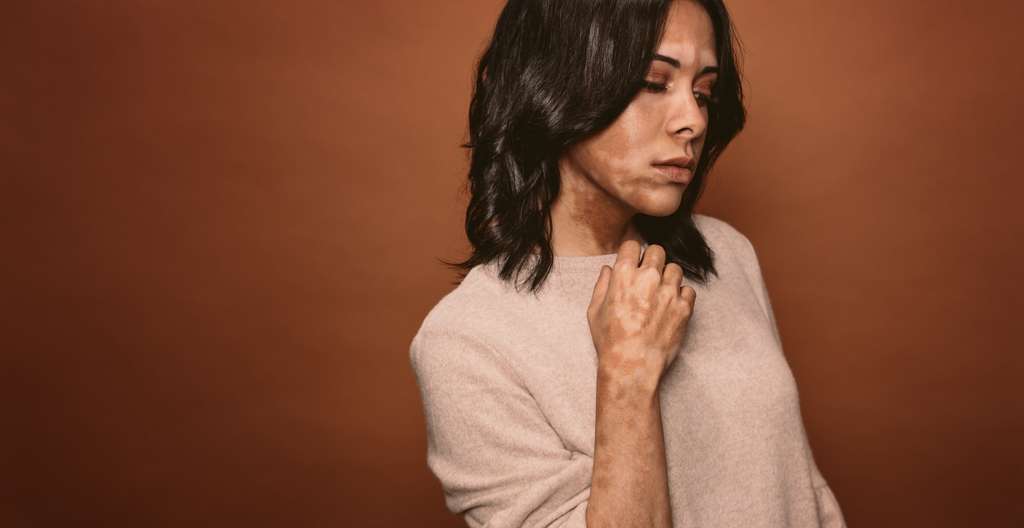 While the skin condition vitiligo is not life-threatening, it can greatly alter the appearance of your skin and hair, often causing premature graying in certain spots of your scalp. This is due to vitiligo's effects on the cells that produce melanin, that often causes them to die or stop functioning, according to the Mayo Clinic.

11
You have Alopecia areata. 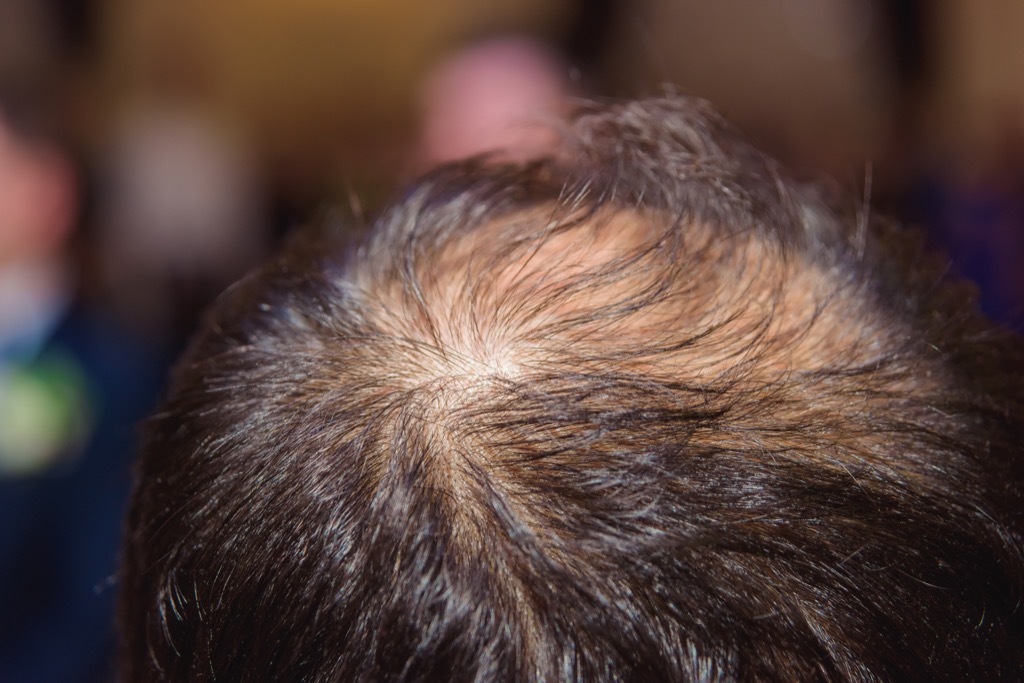 Unlike vitiligo, Alopecia areata is an autoimmune disease that actually attacks hair follicles, leaving sufferers of the illness with bald spots. Then, according to the Wimpole Clinic, regrowth of this lost hair on your scalp will most likely result in weaker hair follicles devoid of pigment—meaning that your new hair will be gray. 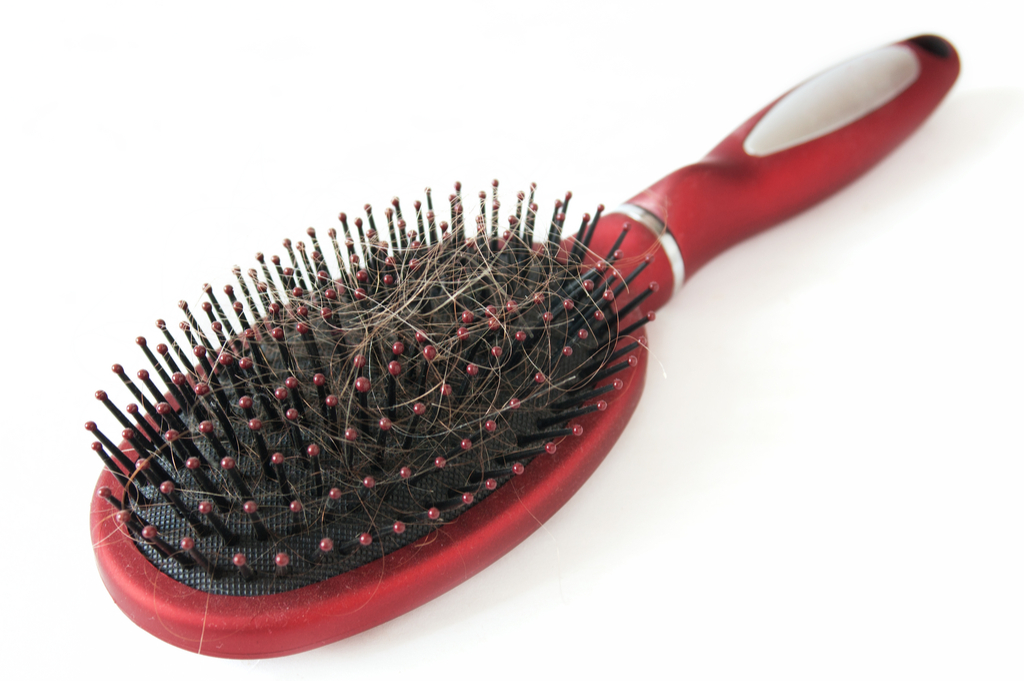 If you're over the age of 35 and you tend to shed your hair quite often, then there's a likely chance that the hair set to replace the old strands will most likely be gray. In fact, according to Women's Health, there are a number of factors that could damage your hair follicles and lead to prolonged excessive shedding, such as stress and using blow dryers, straighteners, and chemicals in the hair. In short, be kind to your hair and your hair will reward you with brighter strands. And for more great facts about your follicles, see the 20 Surprising Reasons Your Hair is Thinning.

13
You have heart disease. 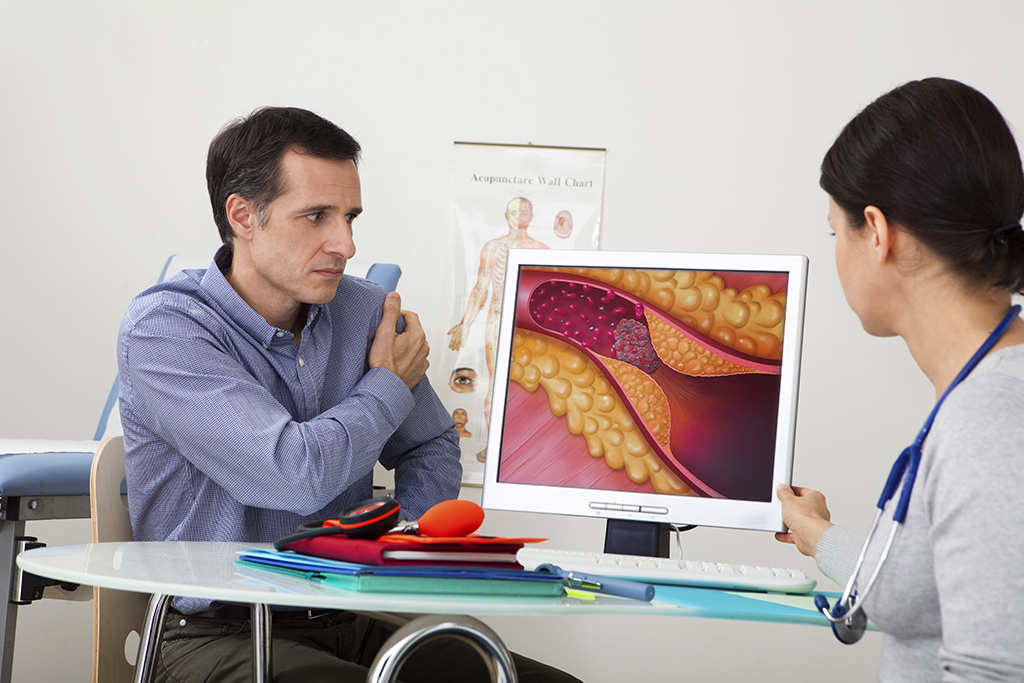 According to a study presented at the European Society of Cardiology's annual congress, the "hardening and narrowing of one's arteries, called atherosclerosis, and the graying of hair both rely on similar mechanisms," which means that if you're at risk for developing a heart condition—or if you already have been diagnosed with one—your chances of developing gray hair are much greater. Additionally, the study pointed to the astonishing fact that graying hair could also signify a heart condition, as a large percentage of the 545 men tested with gray hair presented early signs of heart disease. 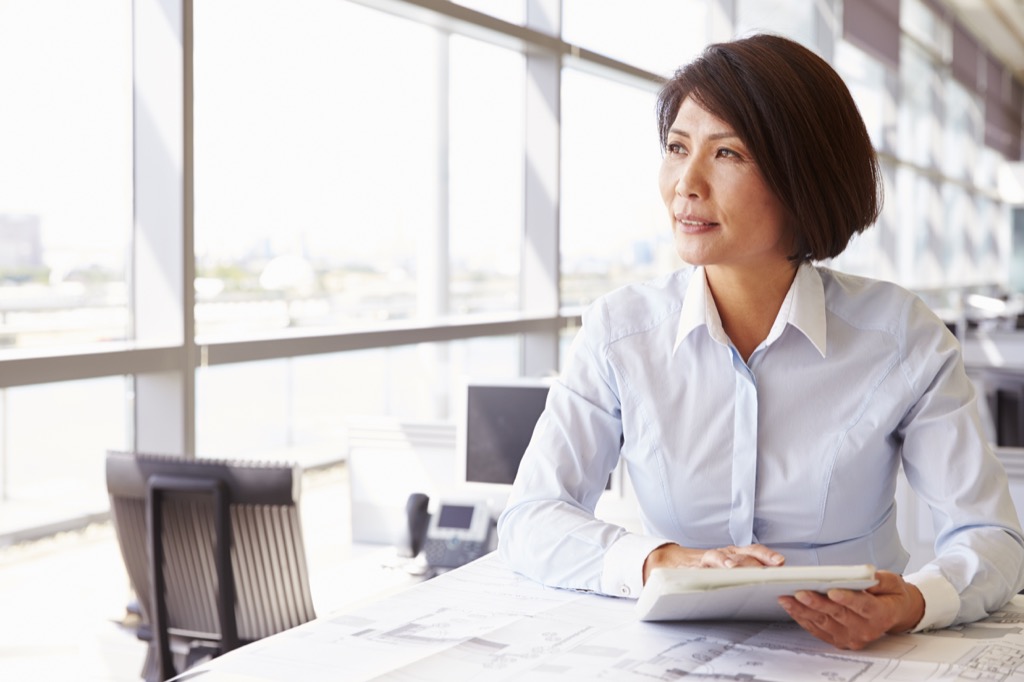 To be fair, if you've already made it to 50 without a gray hair in sight, you should count yourself as lucky, since half of the population sees at least some graying up to this point, says Dr. Michael Eidelman, Medical Director of Chelsea Skin & Laser and Assistant Professor of Dermatology at Icahn School of Medicine at Mount Sinai.

"On average, 50 percent of the population will have 50 percent gray hair by the age of 50," he said. He also pointed out that men tend to begin noticing gray hairs around age 30, while women won't typically show signs of graying until age 35.

15
Your hair is more coarse than before.

Due to their loss of pigmentation and the damaged nature of your hair follicles, the gray hair that assembles to replace the old, pigmented hair follicles tends to be more brittle and coarse. So, if you've begun to notice a change in the texture of your hair, this could be pointing to the impending doom of colored locks.

According to Scientific American, a traumatic event can affect your whole body—even damaging your hair follicles. Basically, an incredibly stressful event can generate a swarm of free radicals in your hair follicles, which travel along the hair shaft, destroying its pigment in a manner that appears similar to a bleaching effect.

17
You spend too much time in the sun. 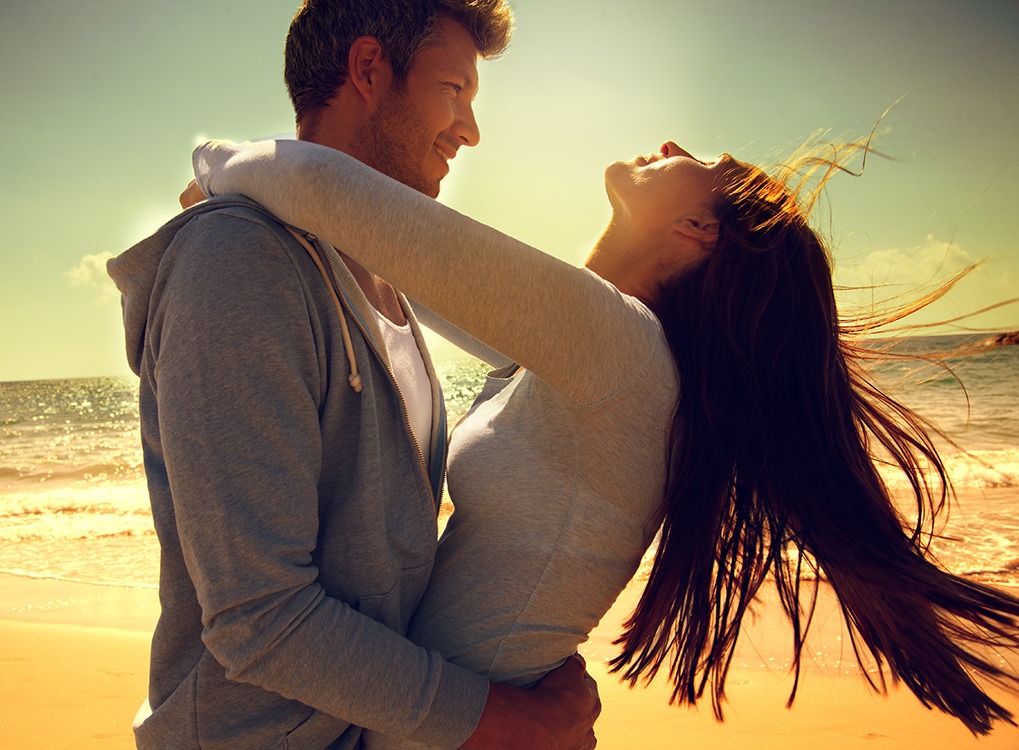 Fact: UV rays affect your hair follicles. In short, it's a bleaching effect on your hair that's incredibly damaging, leaving your follicles brittle and prone to breakage, resulting in the replacement of your healthy strands with gray ones.

So, be careful in the sun and use a hair cream like this one, by Drybar, that will protect your hair from UVA/UVB exposure. And remember: If you're going gray, don't sweat it! Simply check out the 6 Keys for Nailing Perfect Silver Fox Hair.

Ashley Moor
Ashley hails from Dayton, Ohio, and has more than six years of experience in print and digital media. Read more
Filed Under
Wellness
Read This Next
Latest News
Read This Next