The actor and his daughter Ella do some "Tik-ing and Tok-ing" for the big game.

If there are two things that you can count on seeing a whole lot of with Super Bowl commercials, it's celebrities and nostalgia. And the latest Super Bowl ad for Scotts & Miracle-Gro featuring John Travolta and his daughter, Ella Travolta, doing dance moves from Grease is really what the football spots are all about. Because of the product, the commercial features the father and his 20-year-old daughter enjoying their backyard and, as an added bonus, doing Grease-themed TikTok dances.

Read on to see John and Ella in their new Super Bowl commercial, and to check out a few of the other ads that have already been released ahead of Sunday's big game.

And for a look back at another classic you could probably quote from start to finish, This Is What All the "Home Alone" Kids Look Like Now. 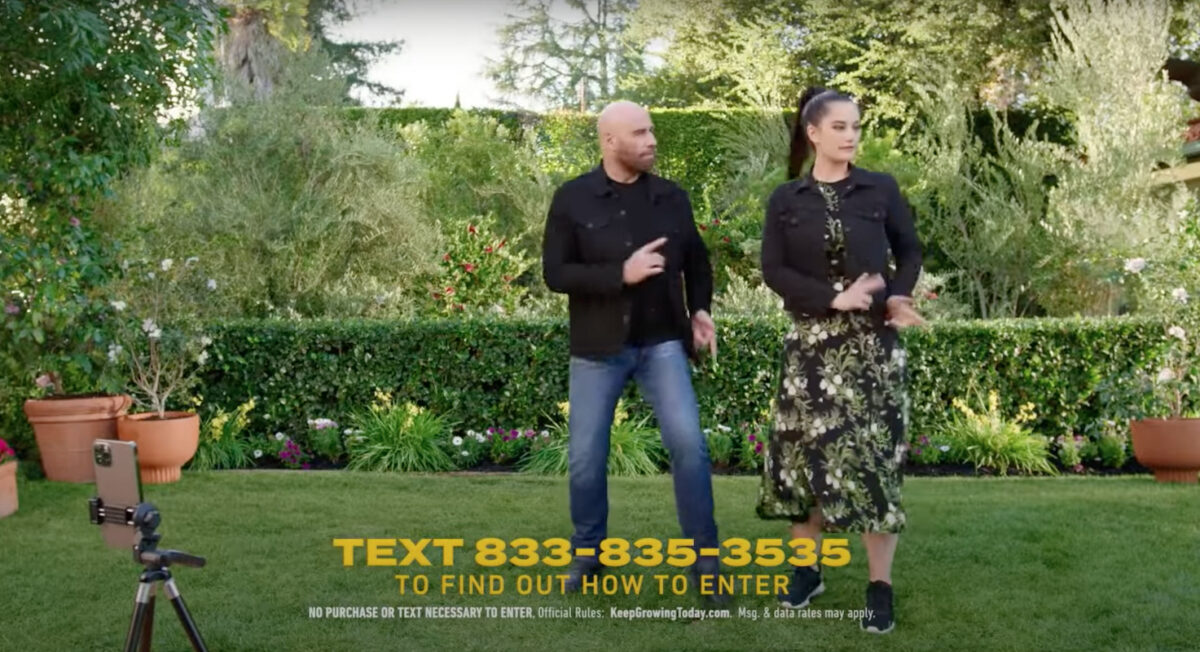 In John and Ella's portion of the Scotts & Miracle-Gro commercial, the former Danny Zuko sets up a smartphone to film him and Ella dancing, and they start doing some moves from "Born to Hand Jive" before breaking into other dances. Instead of the song from the movie, they groove to "Sunday Best" by Surfaces. Baker tells them, "Hey, Travoltas! Don't be Tik-ing and Tok-ing on my grass!" (You can watch the full ad here.)

For more adorable celebrity families, check out Heidi Klum Just Posted a Rare Photo of All Four of Her Kids Together.

Real-life couple Ashton Kutcher and Mila Kunis teamed up for an ad for Cheetos, which also features the musician Shaggy. It shows Kutcher repeatedly catching Kunis stealing his Cheetos while she repeats a line from Shaggy's famous song: "It wasn't me." In an interview with Entertainment Tonight, Kunis shared that she and Kutcher jumped at the opportunity to do the commercial for one very particular reason. Find out what it is here: The Hilarious Story Behind Mila Kunis & Ashton Kutcher's New Super Bowl Ad.

Mike Myers and Dana Carvey brought back their characters Wayne and Garth from Saturday Night Live and the Wayne's World movies for a commercial for Uber Eats. The teaser clip for a full commercial to come shows Wayne and Garth joking about how bad a year 2020 was and poking fun at the fact that they're not legally allowed to say Super Bowl.

This commercial for Michelob Ultra features tons of athletes, including tennis star Serena Williams, NBA player Anthony Davis, retired NFL quarterback Peyton Manning, and soccer champ Alex Morgan. Instead of showing them playing their sport, the commercial focuses on their time off the courts/field, enjoying a beer and hanging out with friends.

For more on the tennis phenom, check out Serena Williams Explains Why She Didn't Want Her Daughter to Play Tennis.

Michael B. Jordan for Amazon Alexa

The premise of this Amazon Alexa ad is that a woman working at Amazon admires the device and says, "I literally couldn't imagine a more beautiful vessel for Alexa to be inside." Actually, she could. The rest of the commercial shows her imagining actor Michael B. Jordan as an Amazon Alexa, who can do things like tell her how many tablespoons are in a cup and dim the lights in her home.

Lia Beck
Lia Beck is a writer living in Richmond, Virginia. In addition to Best Life, she has written for Refinery29, Bustle, Hello Giggles, InStyle, and more. Read more
Filed Under
Actors • Celebrities • News
Read This Next
Latest News
Read This Next