Our favorite oases of luxurious comfort in every major city.

Whether it's the perfect service, the well-crafted cocktails, or that feeling of transience just hanging in the air, there's something about a great hotel bar that takes you to a better place. If you're a well-traveled man, you know exactly what we're talking about. It's warm. It's cozy. Hotel bars? They're your homes away from home.

With that in mind, we've decided to compile our favorite homes away from home across the entire country and put them all right here. So, next time you're on a business trip—or any kind of trip, for that matter—be sure to keep these beautiful urban oases of alcohol in mind when you're booking accommodations. And if you find yourself staring down your boss across the table, here are the drink orders guaranteed to impress him.

Jazz, like Bemelmans, refuses to die. At this point, Bemelmans is a New York institution. With walls covered in Ludwig Bemelmans murals—that's the namesake—and jazz every night, you can't get more "New York, New York" than Bemelmans. Show up on Mondays and you'll get to see Woody Allen play a set with his band. Start spreadin' the news. 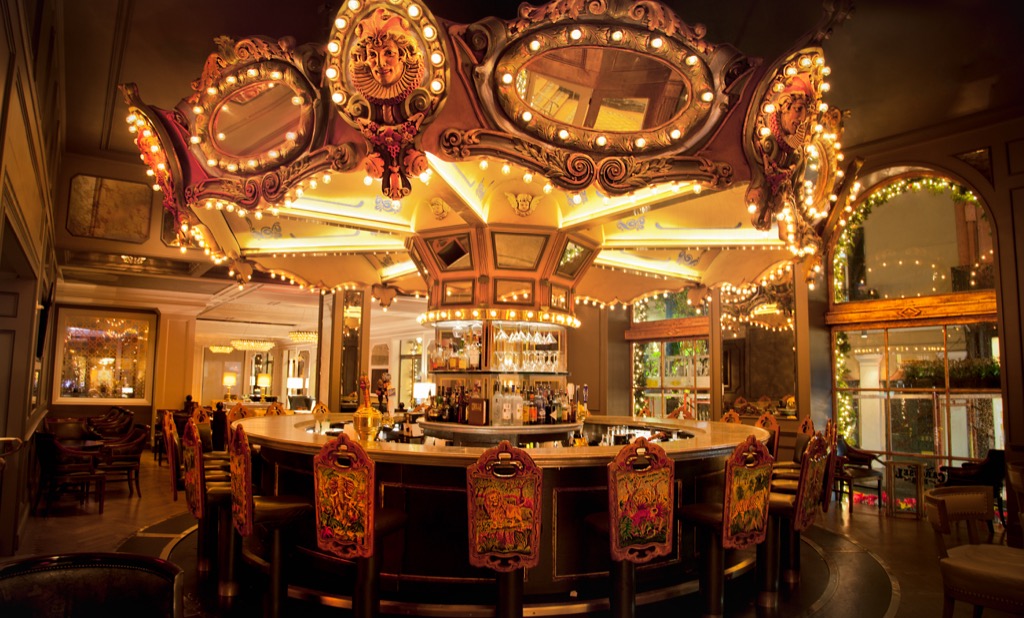 There's only one thing you need to know about this place: it spins. The bar is quite literally a carousel. On top of that, the crowd is a joy to be around, and—since you're in New Orleans—you can bring a plastic cup and take your leftovers to go. Not that you'll need to, of course. The drinks at The Carousel are top notch tasty; there's little chance of a single drop being left behind.

Bank & Bourbon features more than 100 different whiskeys—from deep-South bourbons that'll put hair on your chest to a selection of elegant Japanese blends that are all the rage right now. And if you're seeking something truly authentic, check out the bar's main draw, a signature barrel-aging process. A handful of high-quality whiskeys are stored in oaken casks, giving select flights that campfire taste each and every one of us loves so much. 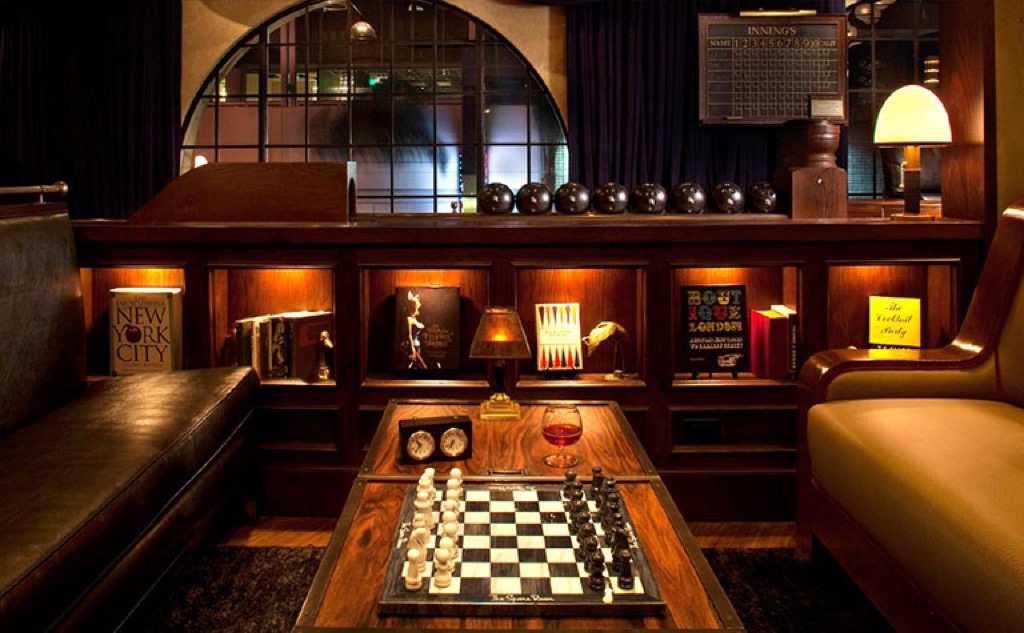 The Spare Room is about drunken socializing and upscale revelry, sure. But more to the point, it's about pure, childlike fun—which is strange, for an establishment centered around booze. Two bowling lanes, plus a more than a dozen other gaming options—from Mahjong to chess—ensure that fun can and will be had all around. The booze is an added pleasure. 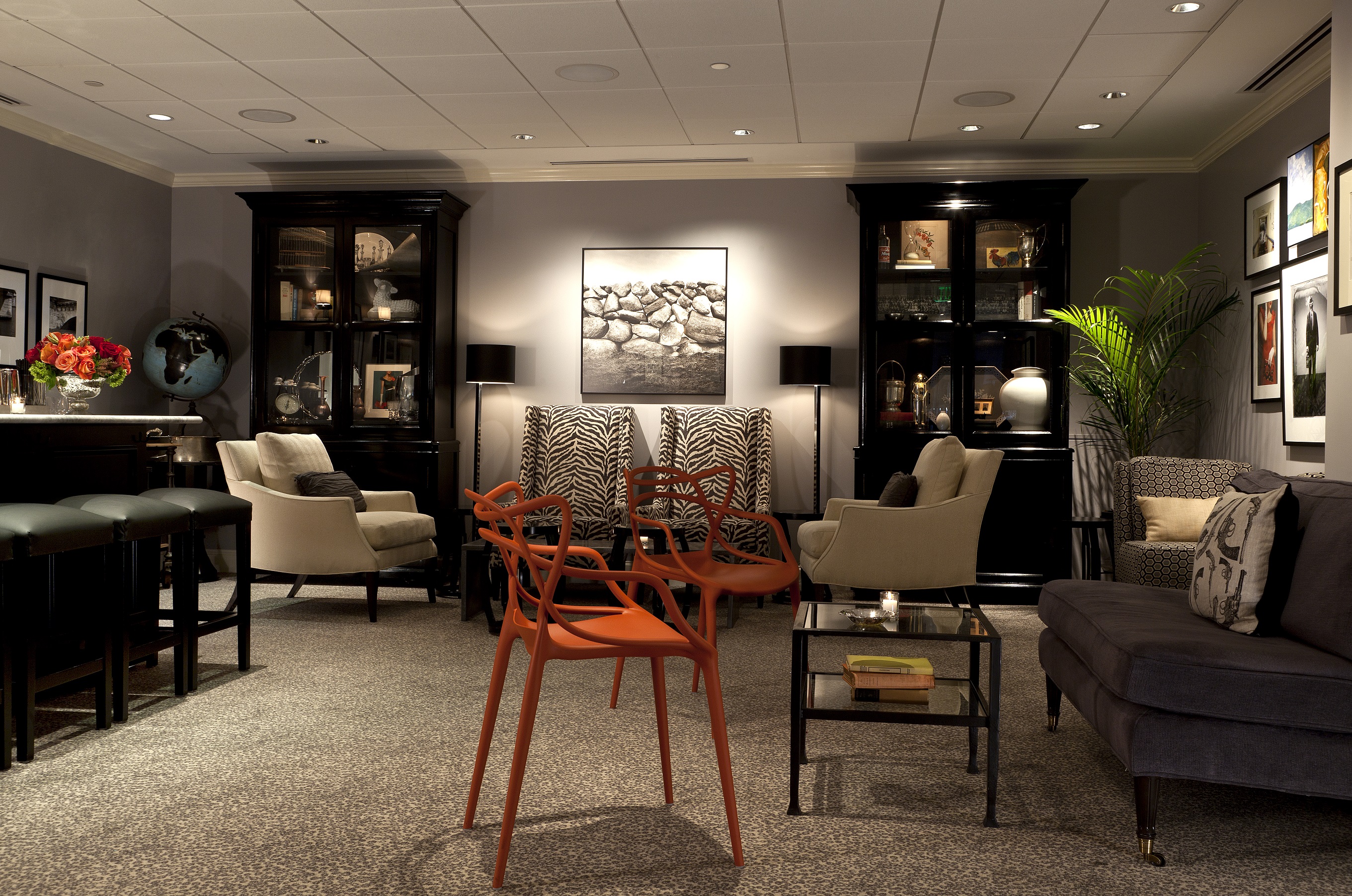 If the menu opens with a Hemingway epigraph, you know the establishment is serious about its boozing. With a modernist-chic setting and mixologists who can craft a customized cocktail at the drop of a hat, The Hawthorne isn't just one of the coolest hotel bars in town—it's one of the coolest bars, period. And when you're done imbibing, be sure swing upstairs to Island Creek for some straight-from-the-bay oysters—one of the miracle foods that top doctors chomp on.

Image courtesy of The Hawthorne 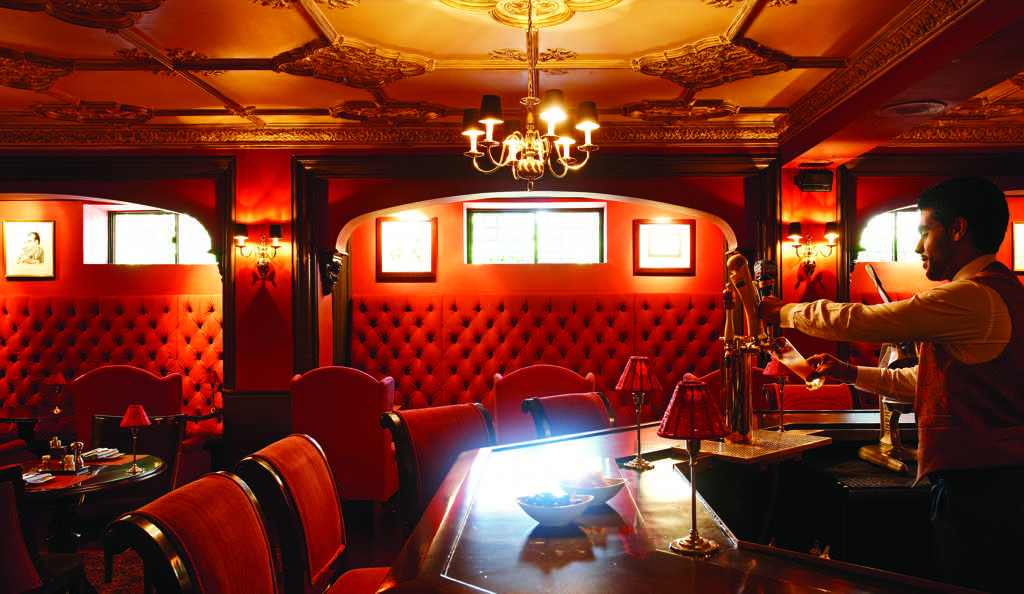 If you're going to drink in the capital—a town that, at least before this year, traded more in sense than dollars—you'd be hard-pressed to find a more aptly named establishment. Tucked away in an upscale hotel mere meet feet from the White House, there isn't a better place in town to whisper secrets—or, while you're at it, some sweet nothings.

Image courtesy of The Hay-Adams

7
The offerings at EAST, Miami 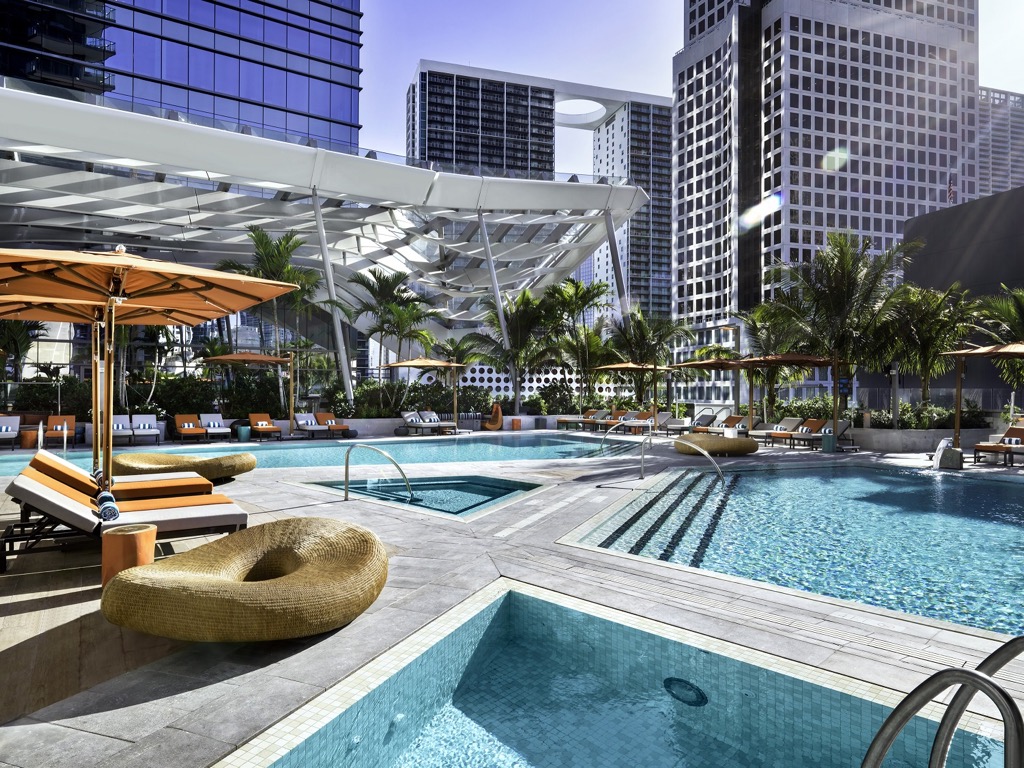 A business trip in Miami demands both showing off and seeing some skin. To that end, be sure to book a room at East, where there's a smattering of hotel bars to choose from. Spend your off time during the day at Pool & Deck, a swanky poolside watering hole, open until sunset. Then, when your daily obligations are done, head up to the exotic rooftop bar, Sugar, to get some sugar. 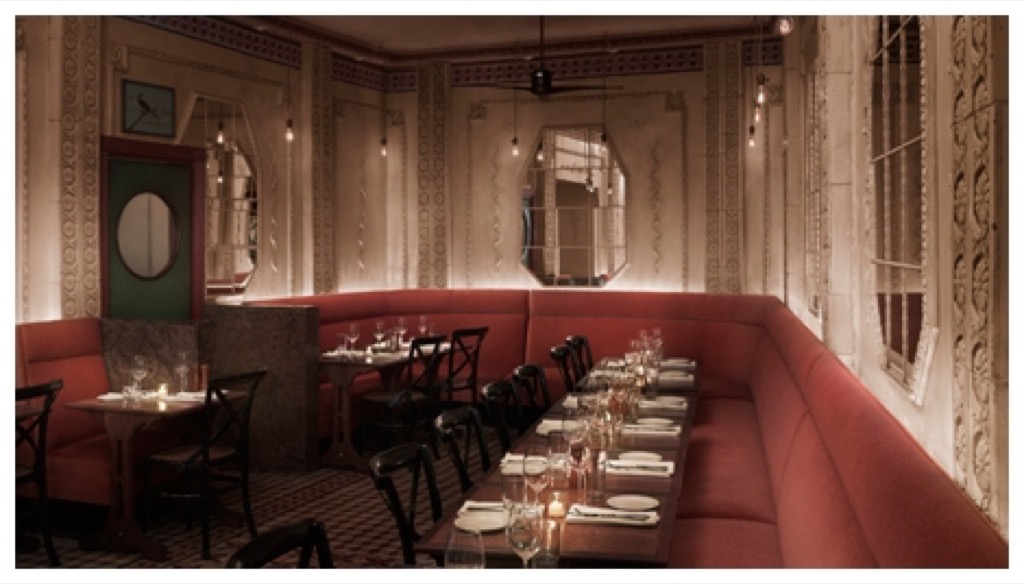 The Chateau Marmont boasts an illustrious history—John Belushi legendarily overdosed on the premises, for one thing—so if celebrity culture is your jam, be sure to book a room here. For our money, though, the bar is what makes this place worth it. Nothing too exotic here. But the master bartenders at Bar Marmont have perfected all of the classics—from the martini to the sidecar to, ironically, the Manhattan. If it ain't broke, don't fix it. Fat chance you'll ever be in tiny Portland, Maine, for business. But if you ever find yourself in the sleepy hamlet for a night, there's only one place to drink: Tempo Dulu, at the Danforth Inn. From sake-infused snow cones to cold brew–mezcal concoctions, few hotel bars in Portland—or America, for that matter—have a more creative cocktail selection.

Image courtesy of The Danforth Inn 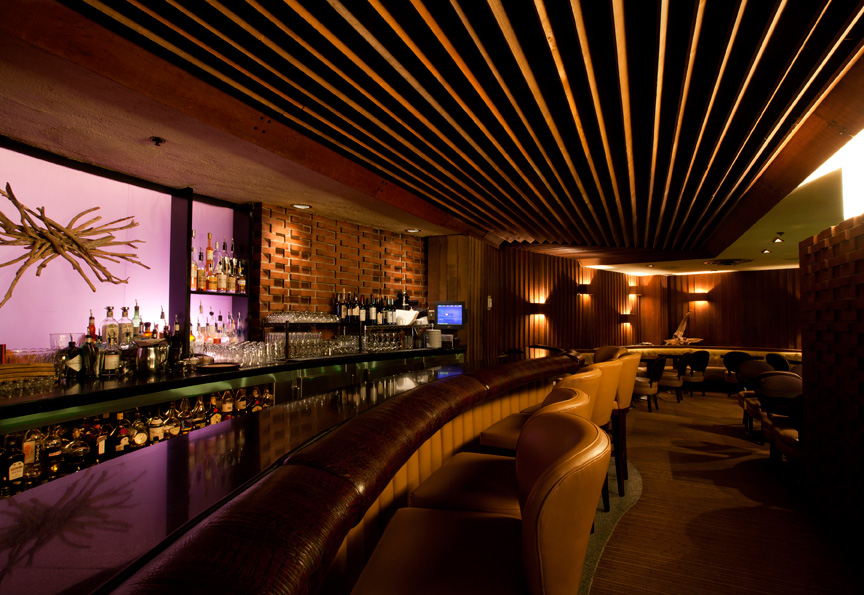 In the other Portland—contrary to what Portlandia may have told you—you'll find a more traditional scene. The Driftwood Room has been serving up classic cocktails in an elegant, leather-clad bar since the '50s. Tradition is so entrenched here that there's even an extensive menu of customizable Manhattans. Feeling adventurous, though? Go for the Green Dragon, a potent potion of absinthe and champagne that is sure to kick your night up to 11. Just make sure to have some hangover-curing foods on standby for the morning. 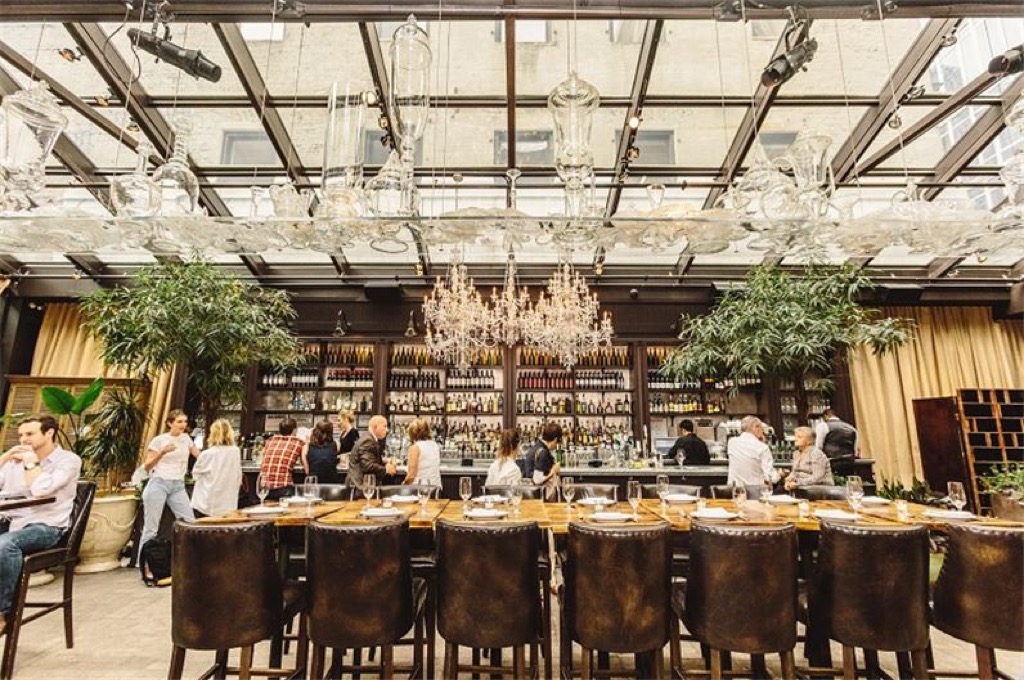 You're here less for the beverages than you are for the scene. Don't get us wrong; the drink selection is fantastic. But the real draw is the ambiance—a vaunted glass ceiling lets in natural light, while the walls are lined with greenery—and the hyper-cool Crosby Street location, in New York's coveted Soho neighborhood, a combination that attracts models and celebrities of all types. 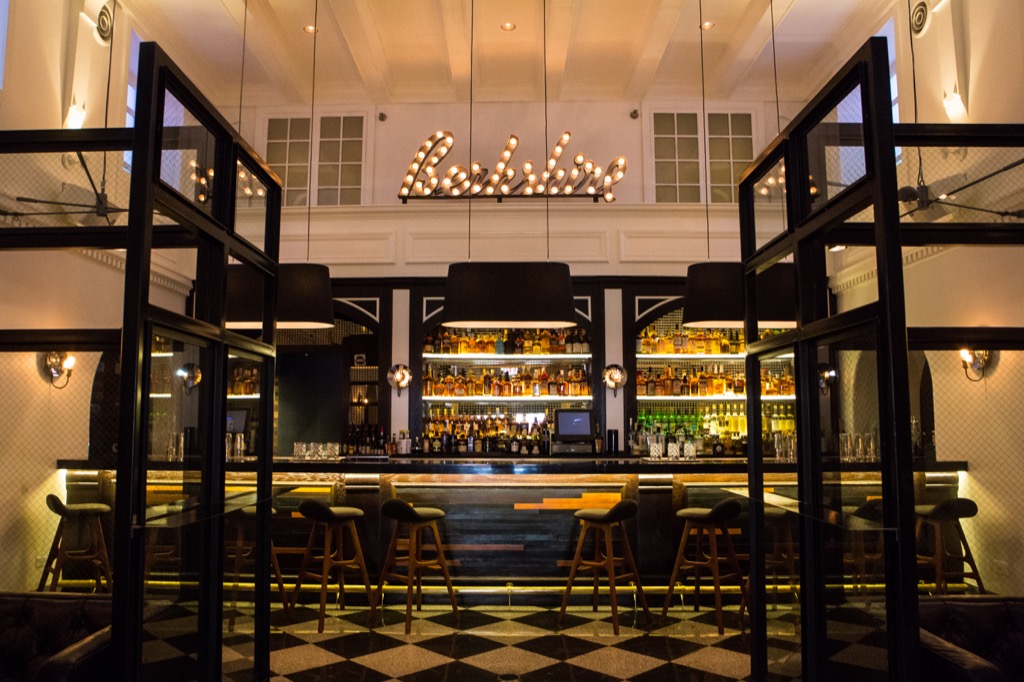 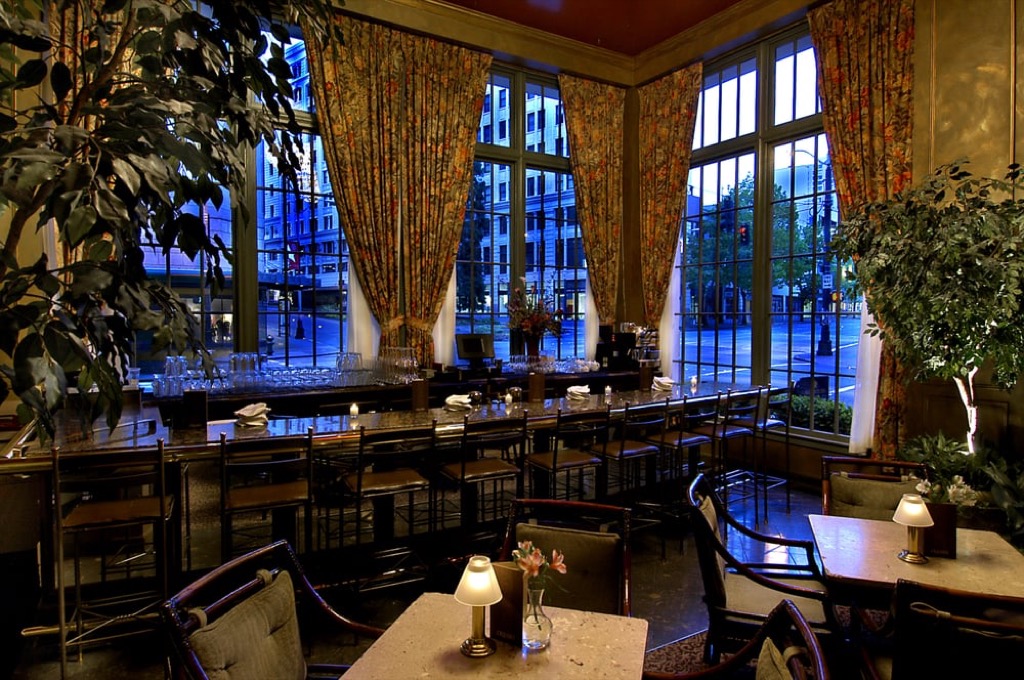 Understated elegance is a rare quality these days, especially in the increasingly ostentatious world of high-end cocktail bars. Oliver's Lounge, located in the storied Mayflower Park, offers just that. The bar is home to the International Martini Classic Challenge, a competition that is exactly what it sounds like. Few things beat taking a break from business to sit in this classic, unpretentious bar and order the most classic, unpretentious beverage—shaken, though, not stirred (but you knew that). Is it any surprise that food would be the main draw at a bar in Nashville? Chorizo and marcona hummus; bacon, jalapeño, and venison poppers; lamb lollipops with cucumber crème fraîche—the small plates at L.A. Jackson shatter everything you know about bar snacks for a unforgettably delicious experience. The outdoor terrace and rooftop views of the city below don't hurt either. Also, there's alcohol. 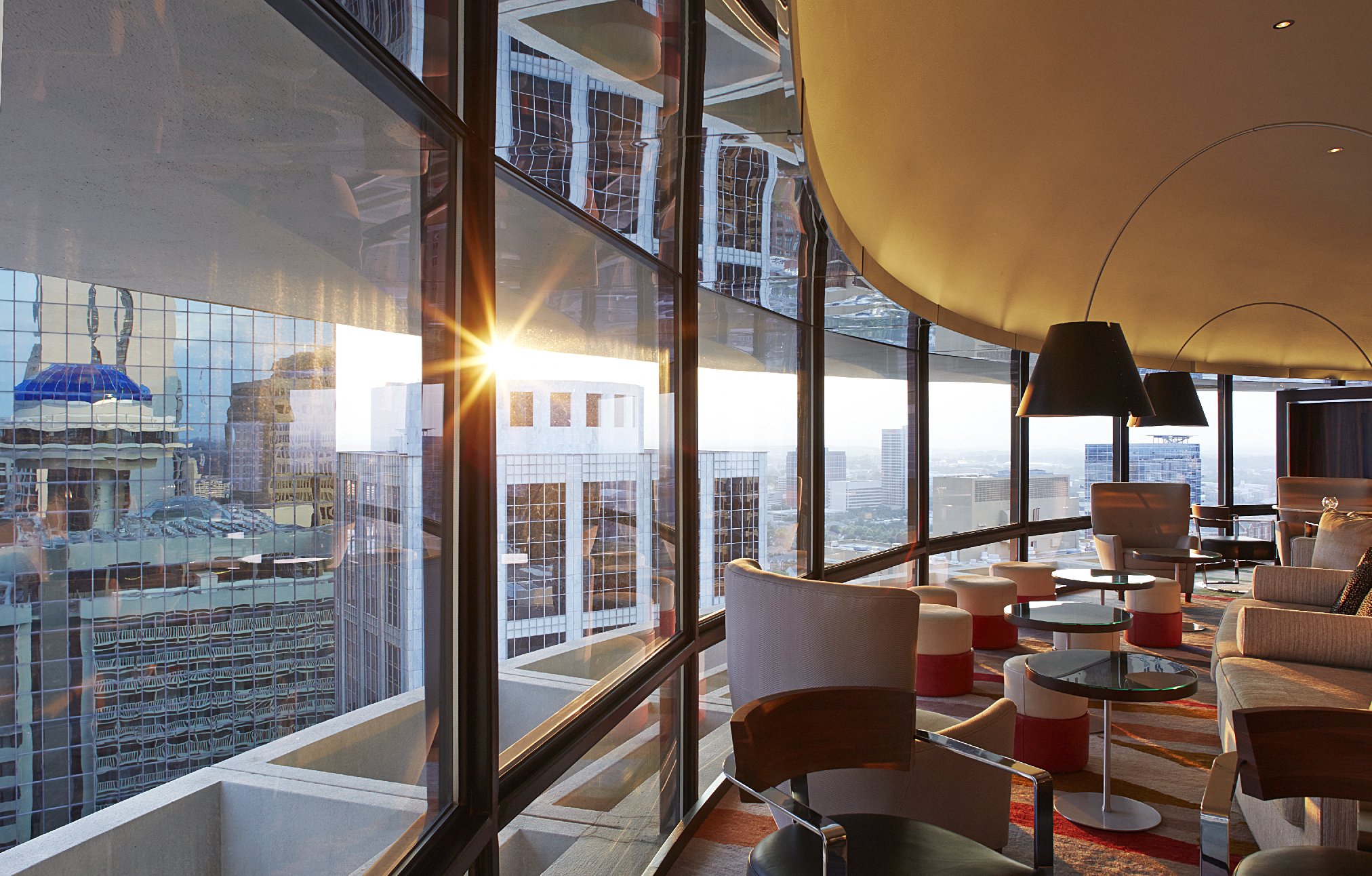 If you're in Atlanta, you stay in Buckhead. Everyone knows that. But we're going to offer you a kernel of sacrilegious truth: stay downtown at the Hyatt Regency. Polaris, the rooftop bar, sits 22 stories up and rotates an entire 360 degrees every 45 minutes, offering a spectacular panorama of the city. The cocktails aren't too shabby either, and a hearty offering of upscale Southern cuisine will sate even the most discerning foodie. That's right: you don't need to shill for the Ritz anymore. 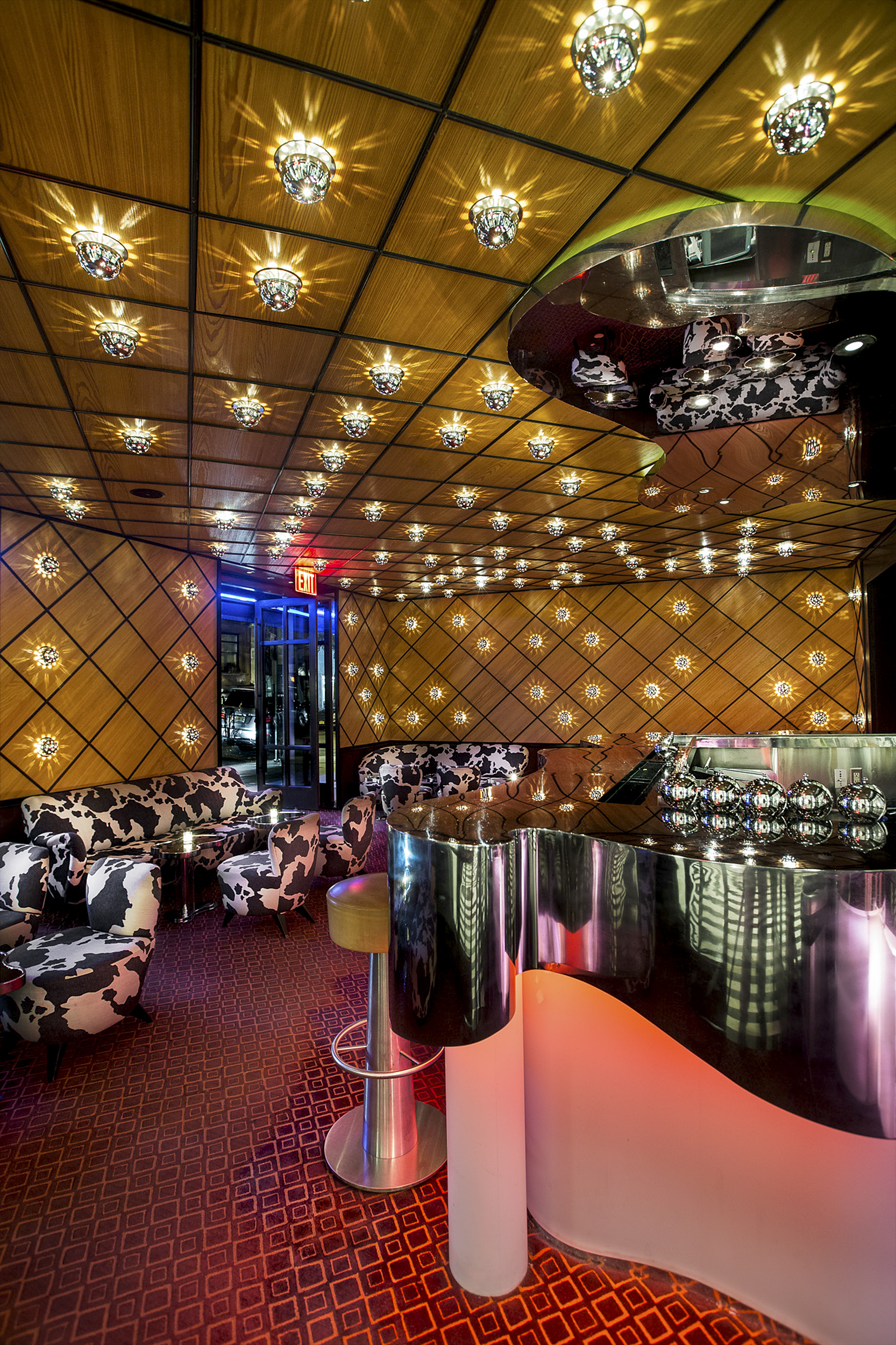 The Mark Bar is what happens when an internationally renowned chef—in this case, Jean-Georges Vongerichten (yeah, that Jean-Georges)—turns his eye to the bar scene. Featuring eye-popping décor, a resplendent list of libations, and a clientele of stunningly attractive individuals, if (rather, when) you're in New York for the night, of all the hotel bars in town, The Mark is the place to be.

Image courtesy of the Mark Hotel 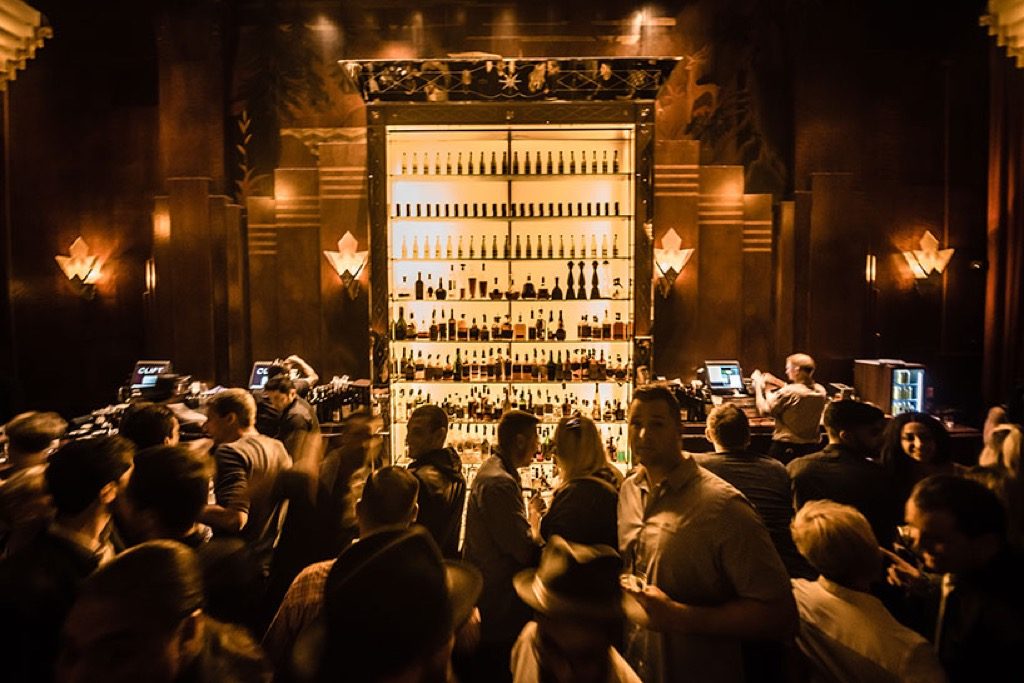 One of the oldest hotel bars in the city, Redwood Room has been around since the '30s. Back in the day, it was known as a snooty establishment, one of those places where waiters wore white tuxes and a patron's etiquette was of utmost importance. But everything old must eventually become new, and now Redwood Room is a sexy, chic establishment that attracts a fittingly sexy and chic crowd. The cocktails may run you an arm and leg, but by every measure, this place is worth it. 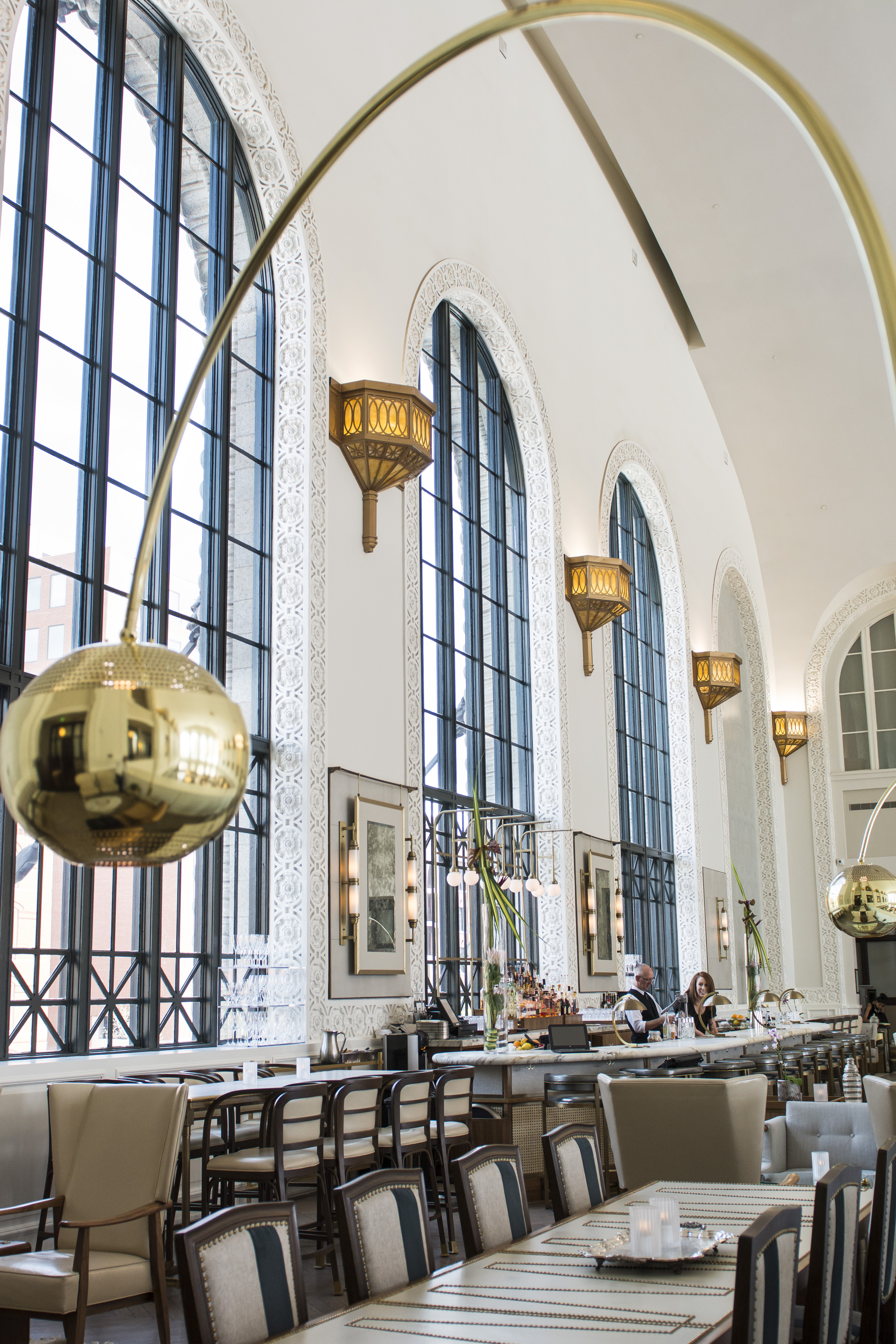 Situated on the mezzanine connecting the Crawford Hotel and downtown Denver's Union Station, The Cooper Lounge recalls a bygone era, when seemingly the whole nation was Western-bound, reveling in the glitz and the glamour of high-class 19th century train travel. Be sure to keep yourself grounded in modern times, though, by ordering the locally raised Wagyu tartare—drizzled, naturally, in Sriracha. Having recently celebrated 130 years of opening, this establishment is steeped in history; it is a frequent watering hole of Texan politicians. Plus, if you're in Austin, you should definitely enjoy some music. Local musicians play at the bar six nights a week. Just remember: You should dress to kill to drink at The Driskill.

Image courtesy of The Driskill 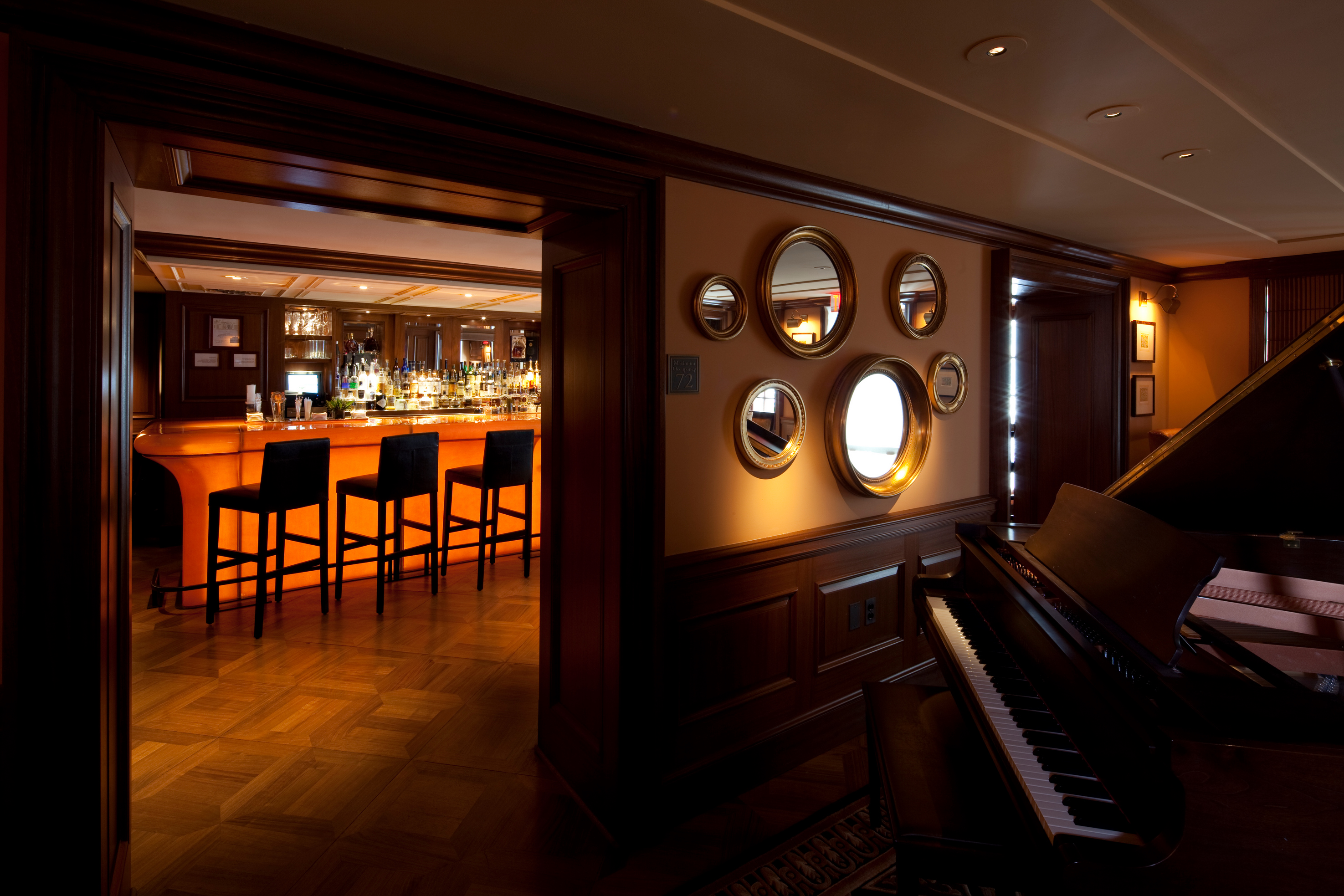 A dimly lit room. An in-house pianist. Dark liquor and cigars on the patio. There's a lot to crave about early 20th century drinking, and Quill sure satisfies much of that craving. One sip of cognac here and you'll no longer believe that time travel is impossible.

Image courtesy of The Jefferson

Ari Notis
Ari is an editor specializing in news and lifestyle. Read more
Filed Under
Bars • Hotels • Vacation
Read This Next
Latest News
Read This Next