Behold: Harry Potter and the chamber of great gifts.

Though the first Harry Potter book was released more than 21 years ago, the franchise still remains as prominent and popular as ever today, with a new legion of fans discovering the series every minute. In fact, it was just this year that creator J.K. Rowling made Harry Potter history again when Harry Potter and the Cursed Child earned the highest box-office revenue of any Broadway show in a single week—proving the boy wizard's powers haven't waned a bit so many years later.

For adolescents and adults alike, the adventures of the boy who lived will simply never die (and quite frankly, they never should). For those people, we've rounded up some of the best Potterhead paraphernalia the internet has to offer just in time for you to finish up your holiday shopping.

Best Life's editors have scoured the internet to bring you the best products out there, and we're hoping you'll love them as much as we do. Full disclosure: we may earn a commission for anything you purchase through links on this page, but that doesn't mean you'll pay more for them (we'd never do that to you!). Pricing and availability are accurate as of the piece's initial publication date, but it's the internet and we can't guarantee that these sweet, sweet deals will last forever, so scoop them up before someone else does!

This watch band, decked out with the same type of footprints often seen scampering around on the Marauder's Map, is perfect for the Fred or George Weasley of your friend group—in other words, the person who's always up to no good. It's built for an Apple Watch, though, so just make sure your mischievous friend owns the proper hardware before purchasing this gift for them. 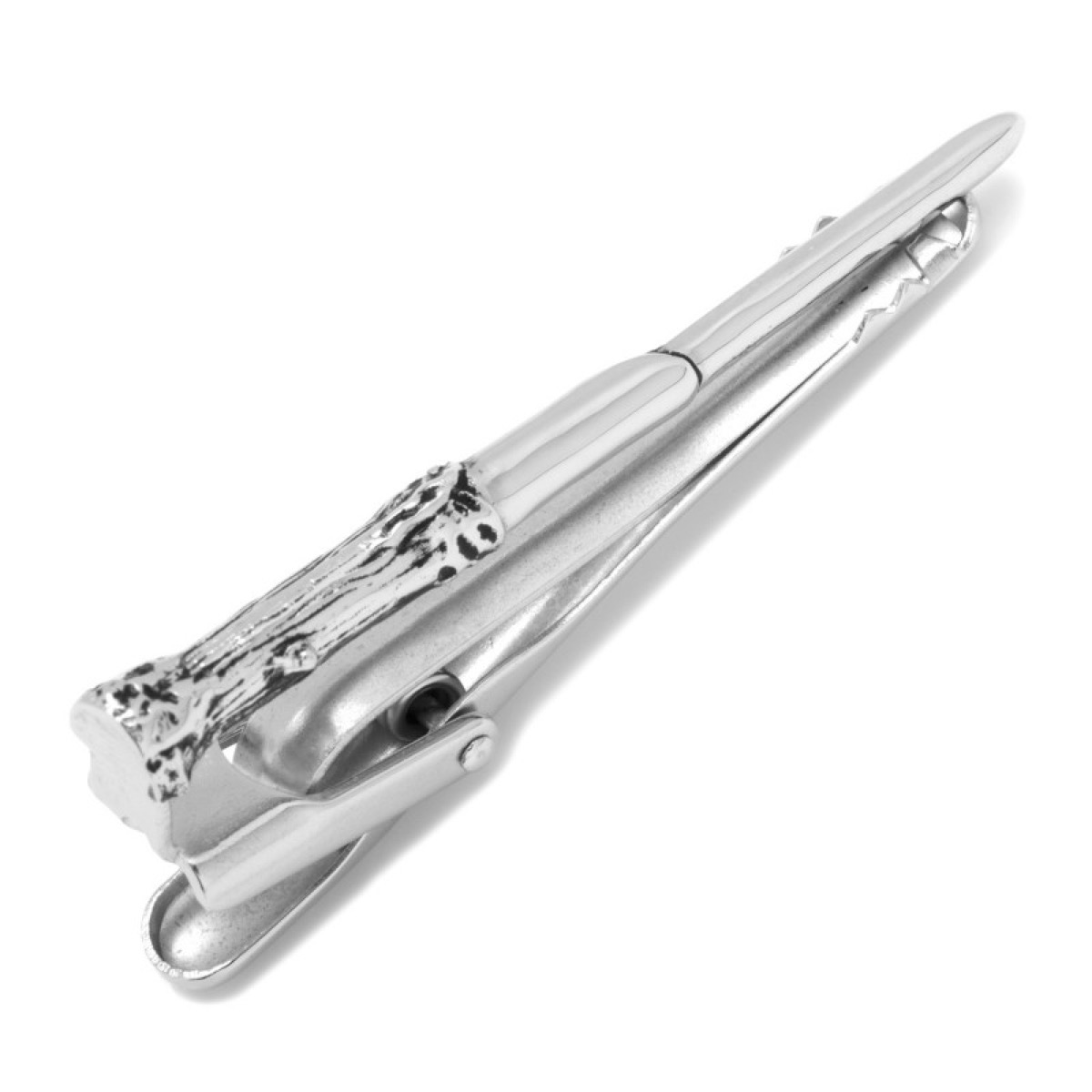 Why should Harry Potter fans have to hide their love of the Wizarding World while enjoying a night on the town? With this tie clip, modeled after Harry's very first wand, fanatics can simultaneously dress for the occasion and show off their appreciation for all things supernatural. 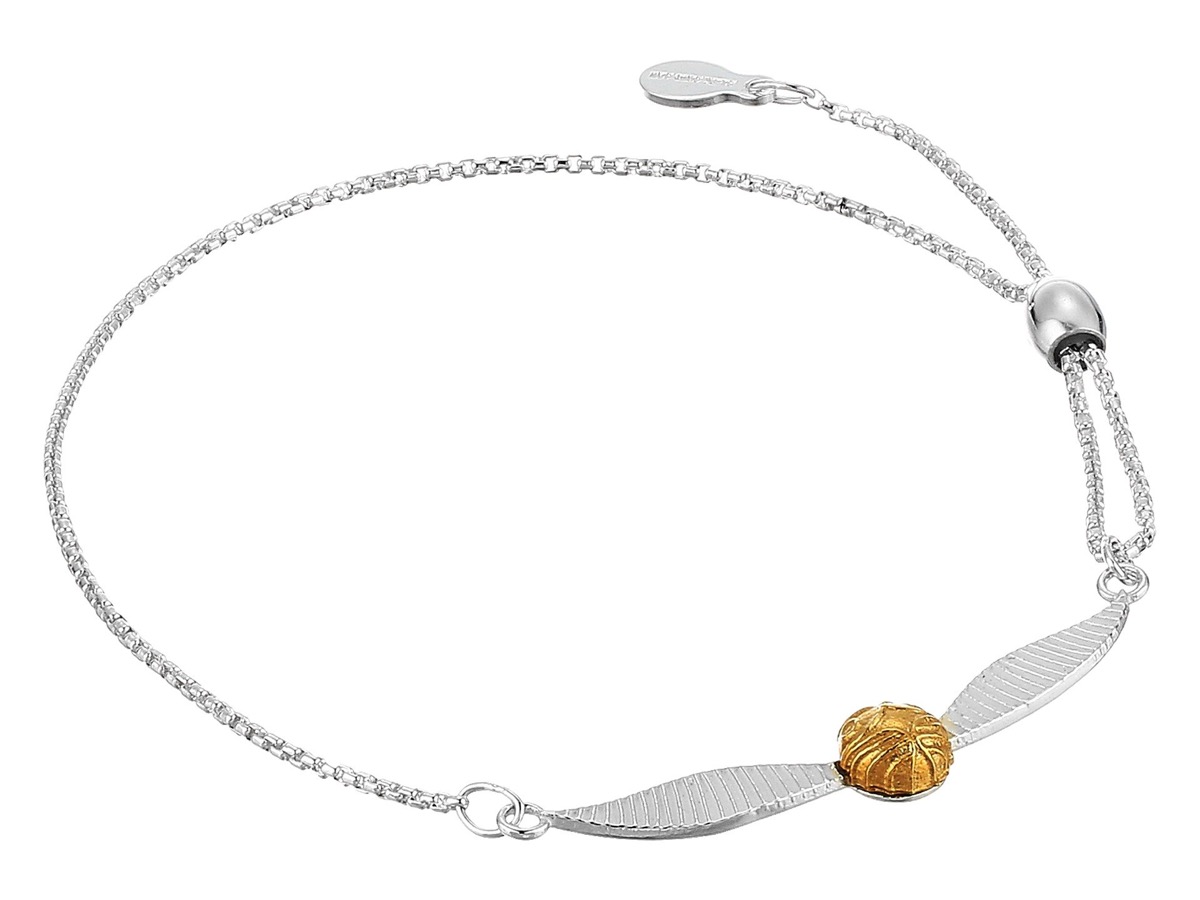 For the Harry Potter nerd who prefers to keep her fangirling subtle, there's the Alex and Ani Harry Potter collection. Though all of the line's 49 pieces contain iconic emblems, like the Golden Snitch and the Deathly Hallows, each is simple enough that it can be worn as an everyday ode to the franchise. 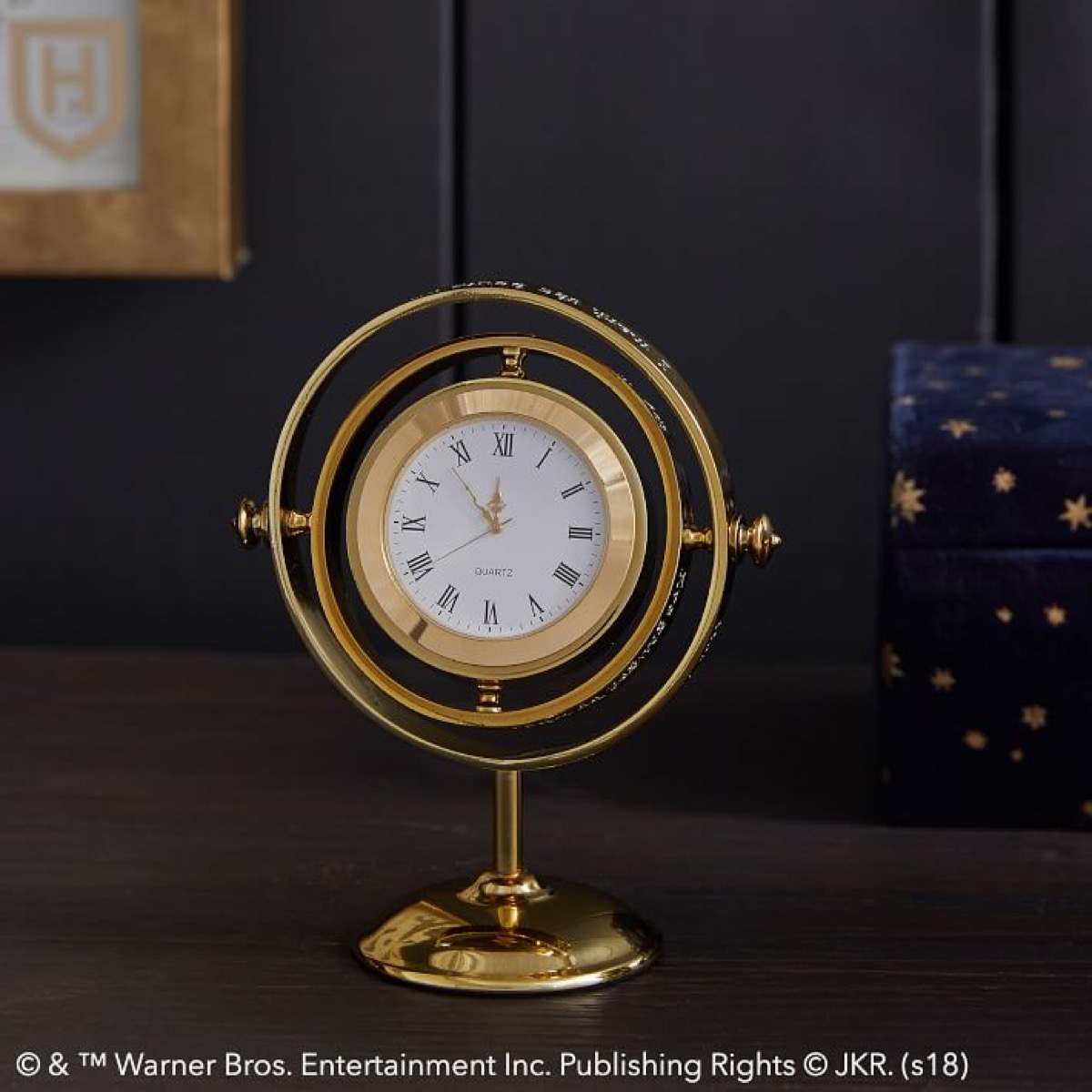 This clock might not be able to turn back time, but it can, at the very least, help you keep track of it in style. 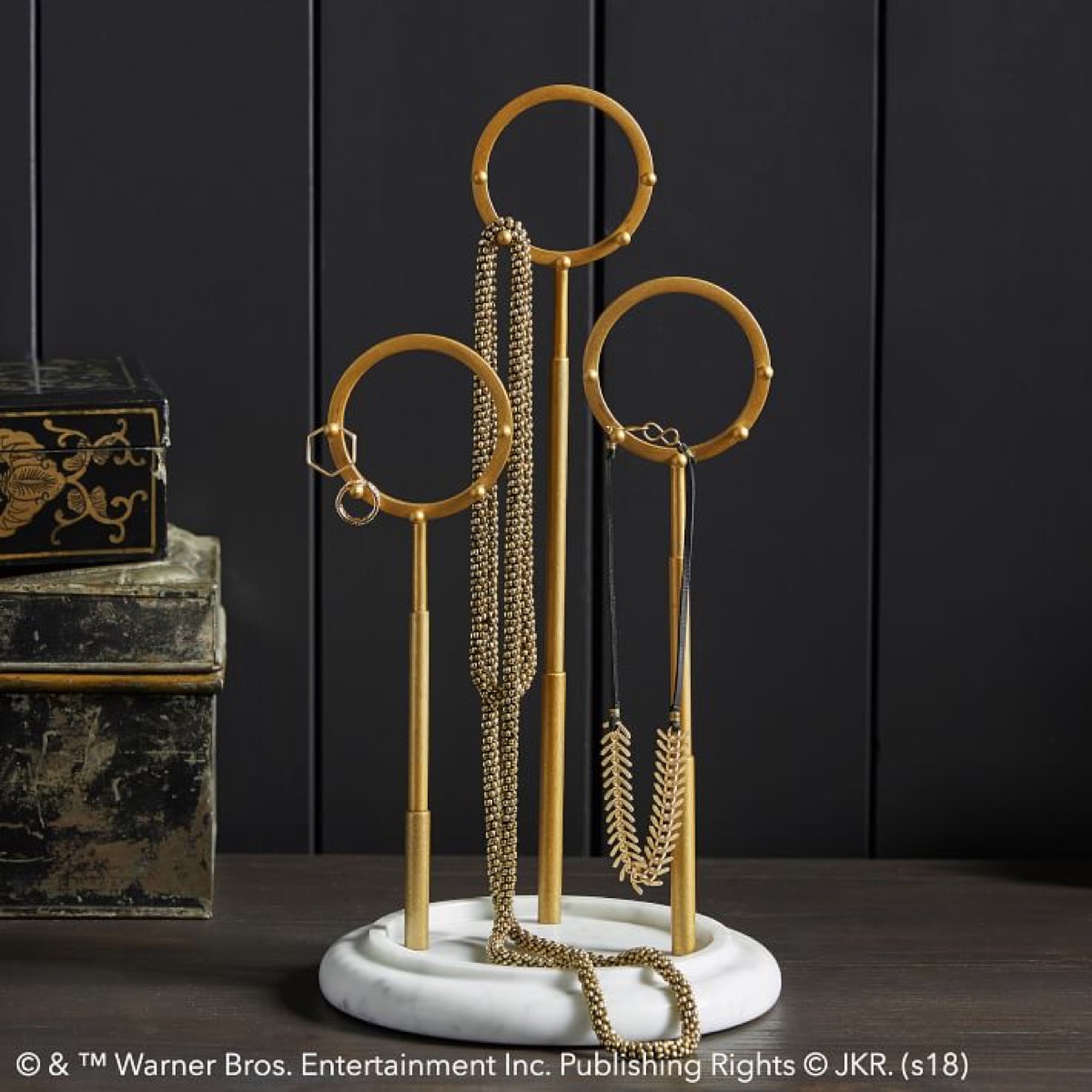 Quidditch, the somewhat dangerous sorcerer's sport featured prominently in the Harry Potter franchise, might not be real, but this goal post jewelry holder is a very real—and charming—tribute to the fictional game. Plus, with a marble base and a gilded gold finish, the accessory oozes poise and decadence that would put even the Great Hall to shame. 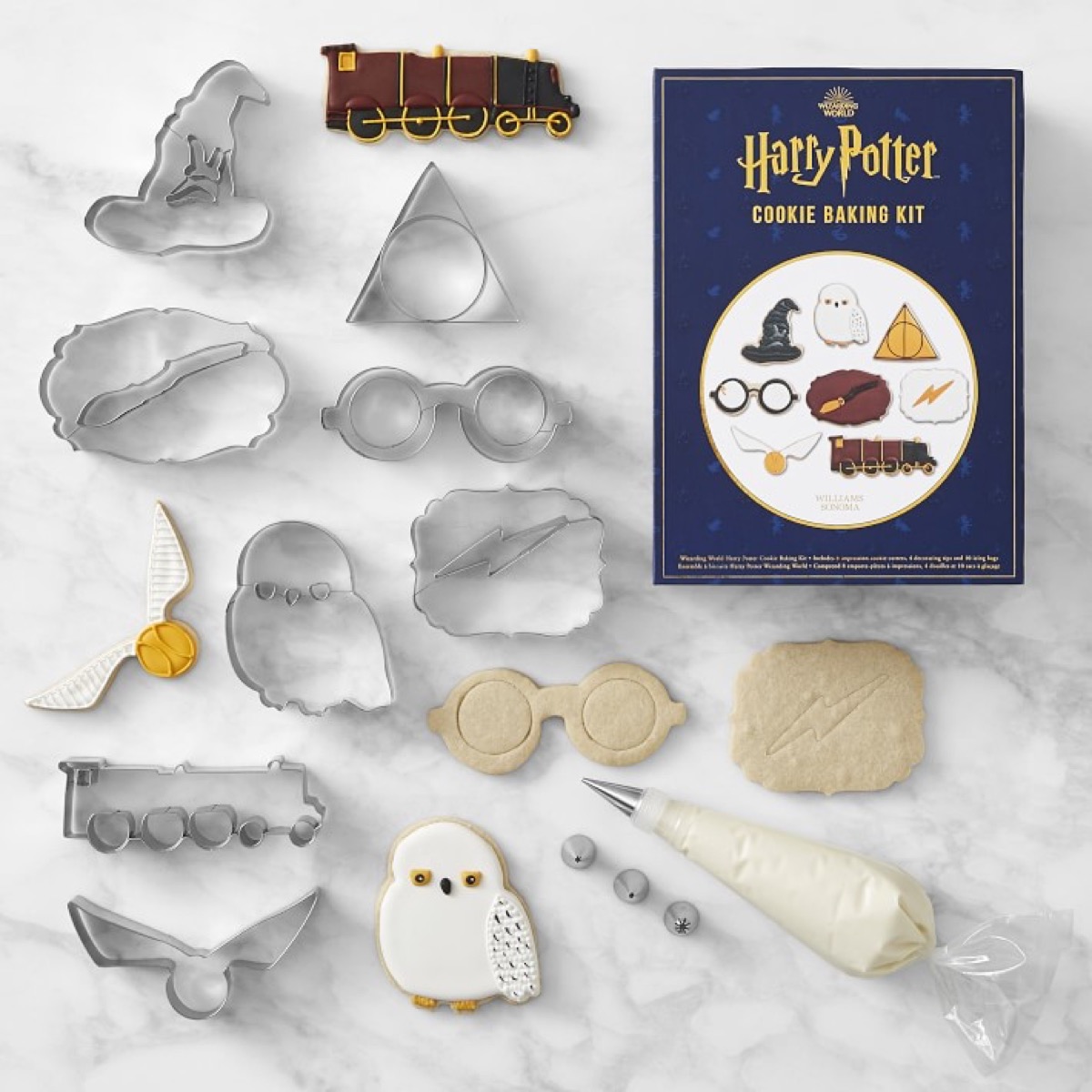 With this cookie cutter set courtesy of Williams Sonoma, the bewitched baker in your life can bring all of their favorite Harry Potter insignias to life. The set comes with eight unique cutters, 12 bags of icing, four decorating tips, and one plastic coupler—basically, everything anyone could ever need to create a fantastical Harry Potter cookie spread. 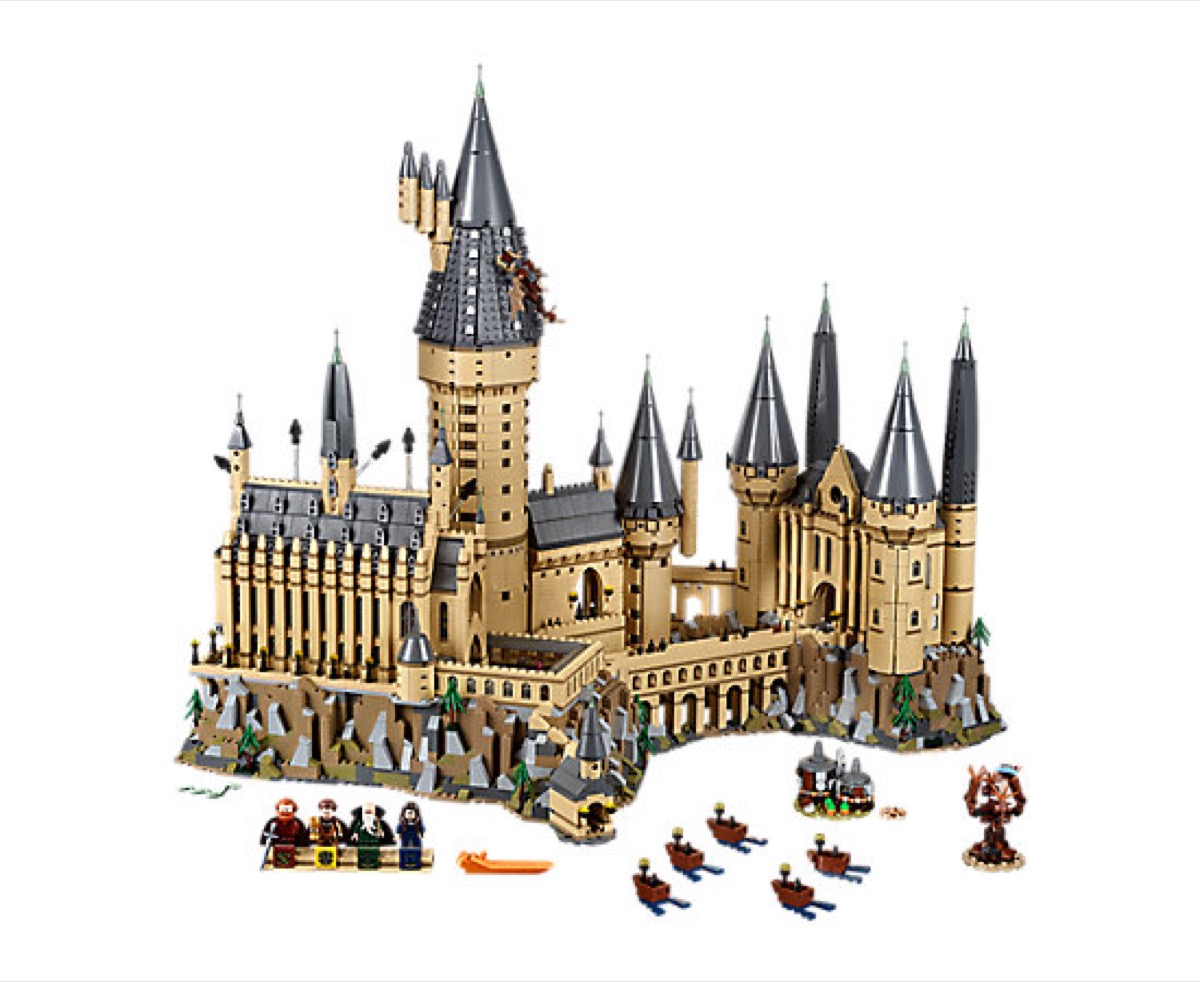 Any Potterhead will delight in putting together this LEGO replica of the famous Hogwarts Castle. Comprised of more than 6,000 pieces, it includes everything from Hagrid's Hut and the Whomping Willow tree to the stained glass windows at the Great Hall. The miniature model is so detailed, in fact, that once it's finished, you can look into the windows of the castle and see specific scenes from some of the movies! 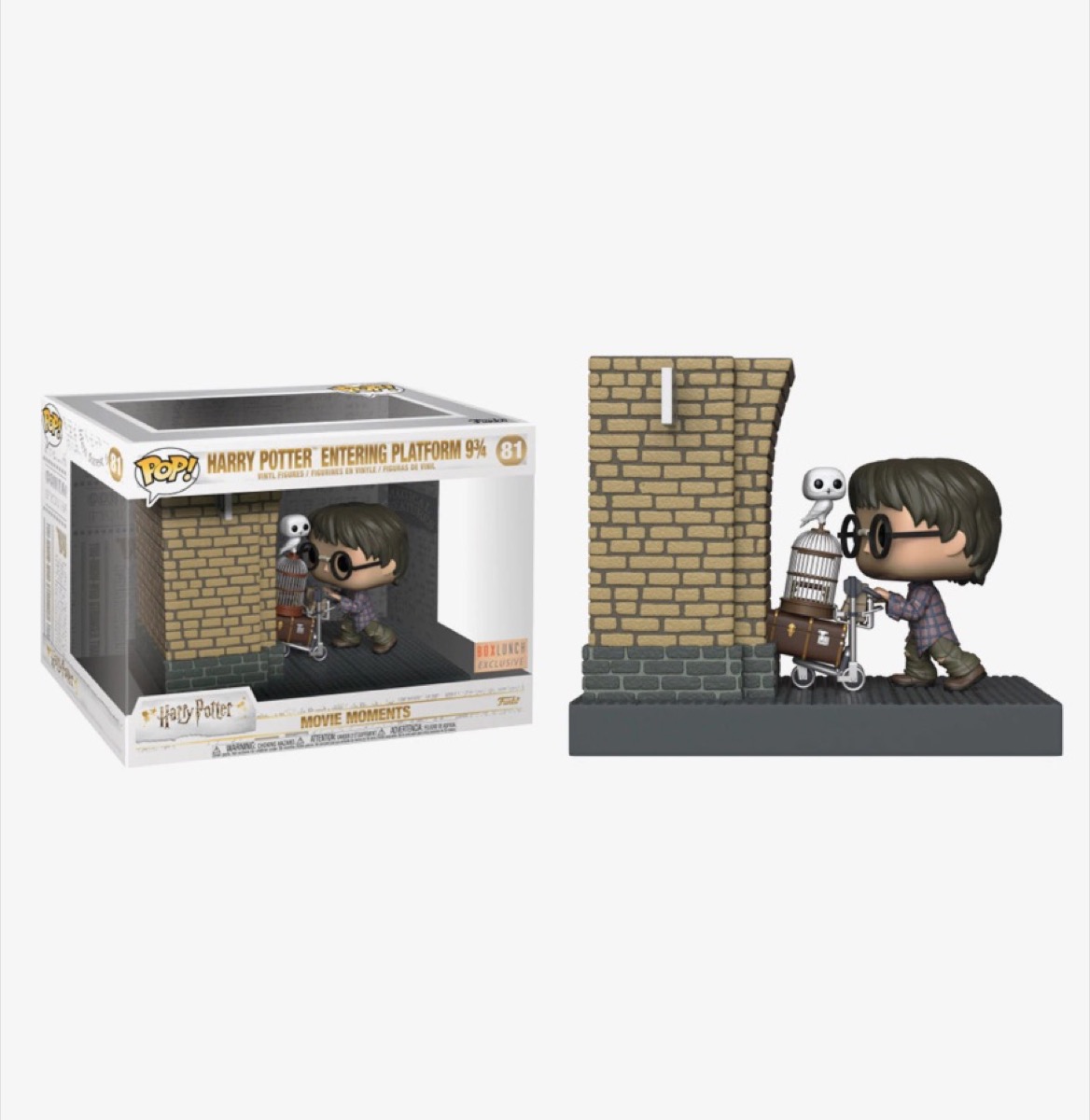 That moment in the first Harry Potter film when a young Harry tries to get onto Platform 3/4 is one of the most iconic scenes in the history of the franchise, making this Funko Pop! vinyl a great present for film fanatics and Potterheads alike.

9
A Mock Mirror of Erised 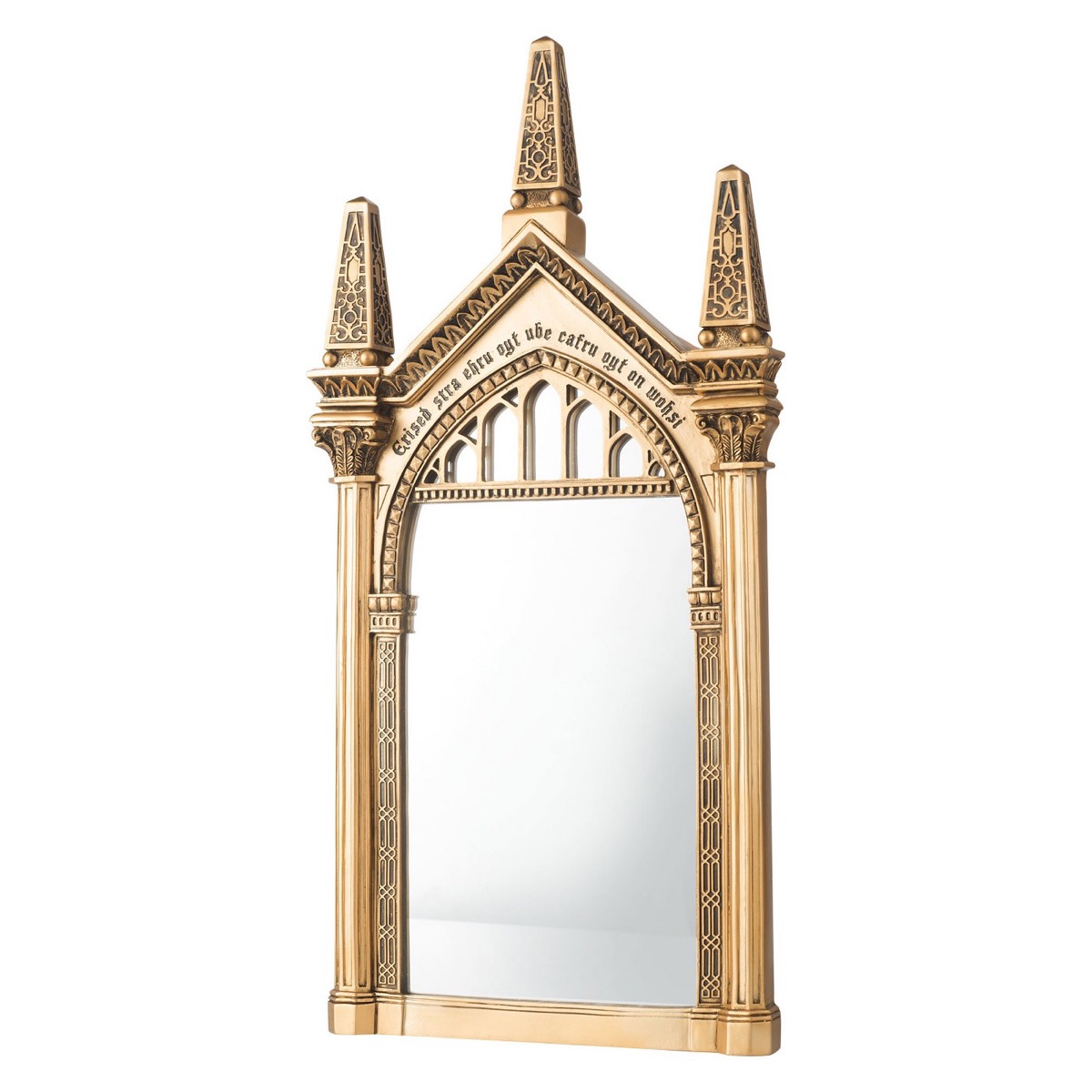 Though the real Mirror of Erised was most likely destroyed during the Battle of Hogwarts, you can still give your friends the gift of a realistic replica of the magical mirror. Unfortunately, Target's version of the mirror doesn't reveal the "deepest, most desperate desire of our hearts"—but, on the bright side, it does have an almost perfect five-star rating on the store's website! 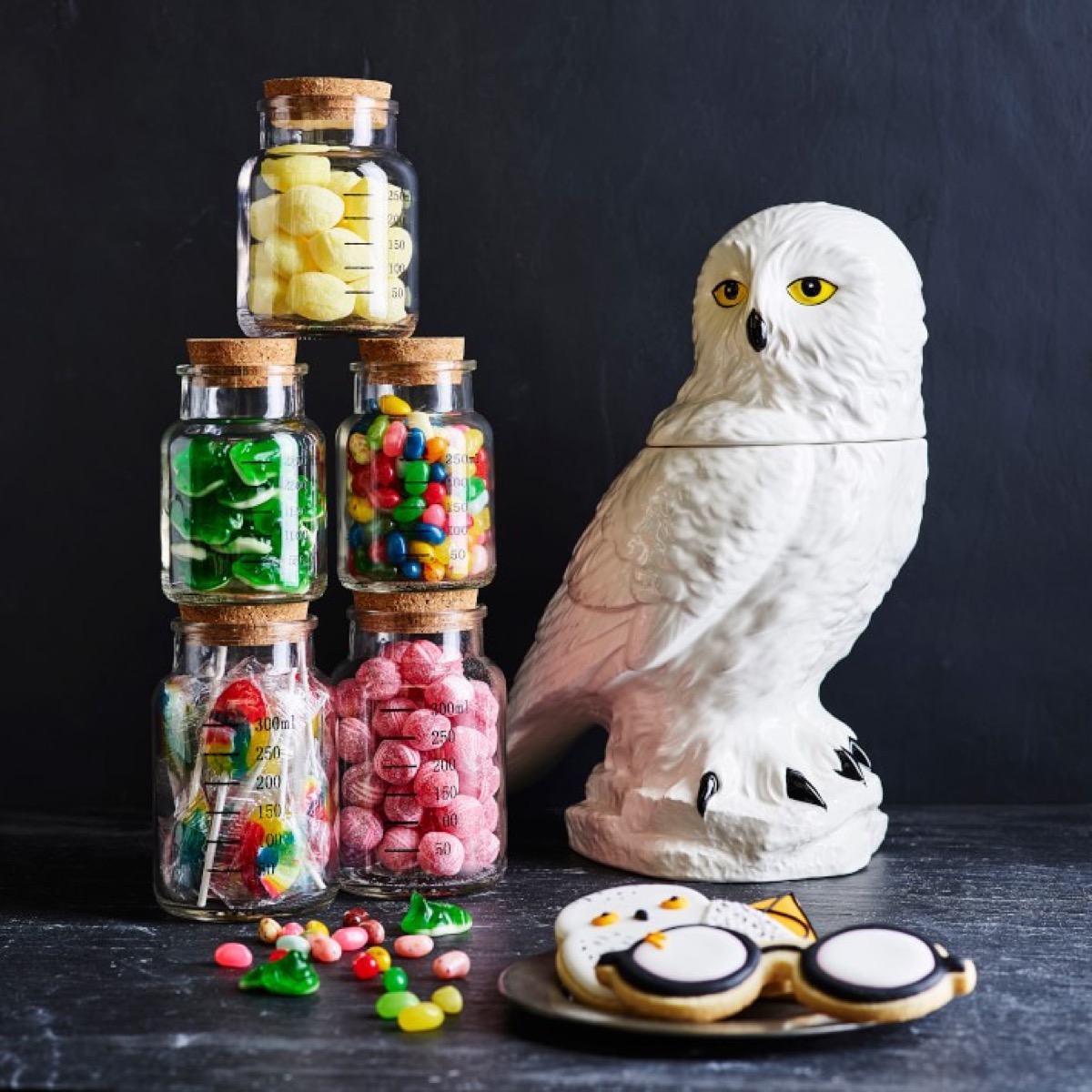 This Hedgwig-shaped cookie jar will protect your sweet snacks from all hoo dare to move in on them.

This color-changing candle is the gift that keeps on giving. If you opt for the "Sort Me!" option, then the candle will change color upon being lit and thusly determine which of the four Hogwarts houses you belong in. And even after you've used the candle to be sorted, you can still continue to light it and enjoy fun Harry Potter scents like Butterbeer, Potions Class, and Gringotts Bank (though, admittedly, we're not entirely sure what the last one smells like). 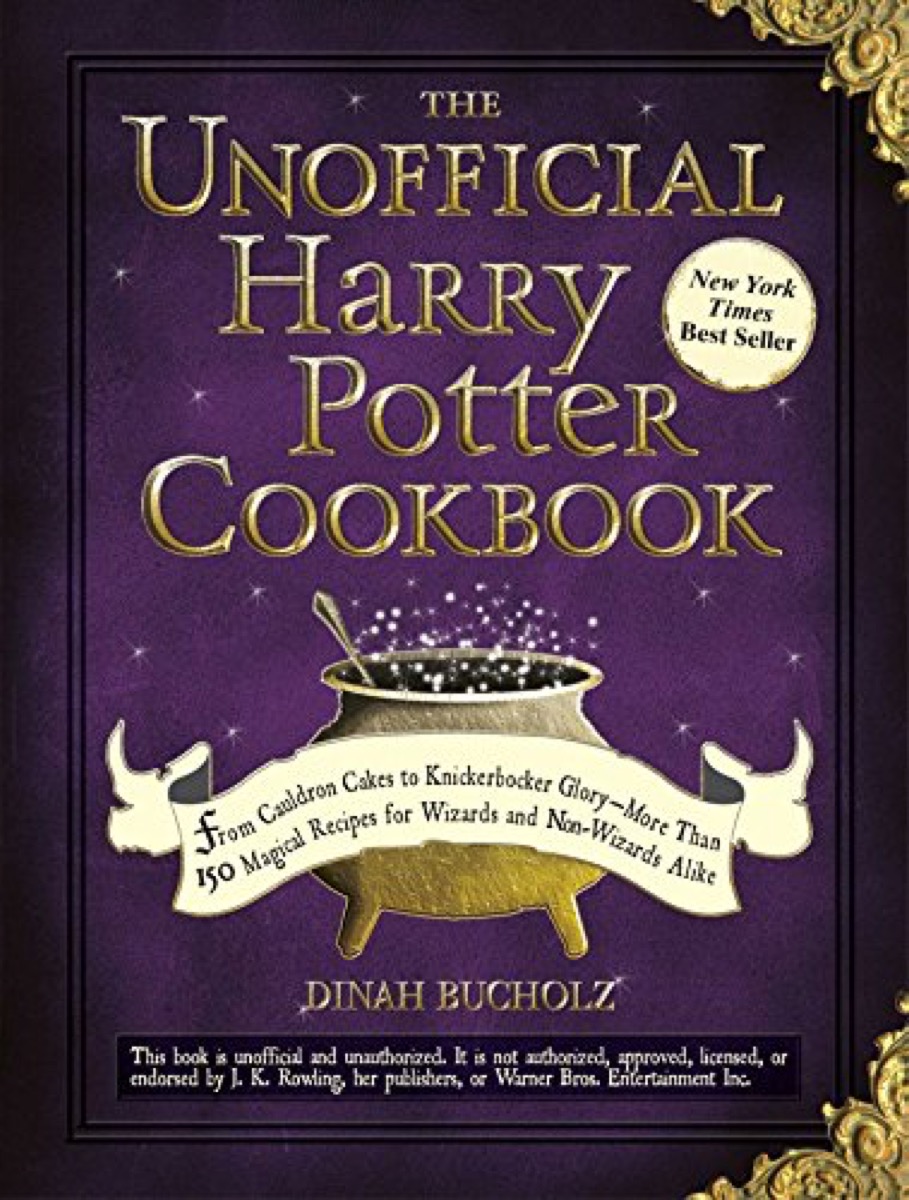 Fantastic treats and where to find them.

This 2019 daily planner with the infamous Marauder's Map emblazoned on its cover is perfect for all of the Type A Hermiones in your life. Like the Hogwarts heroine, it's neat, it's organized, and it's just as beautiful on the outside as it is on the inside.

14
A Potter-filled Game of Trivial Pursuit 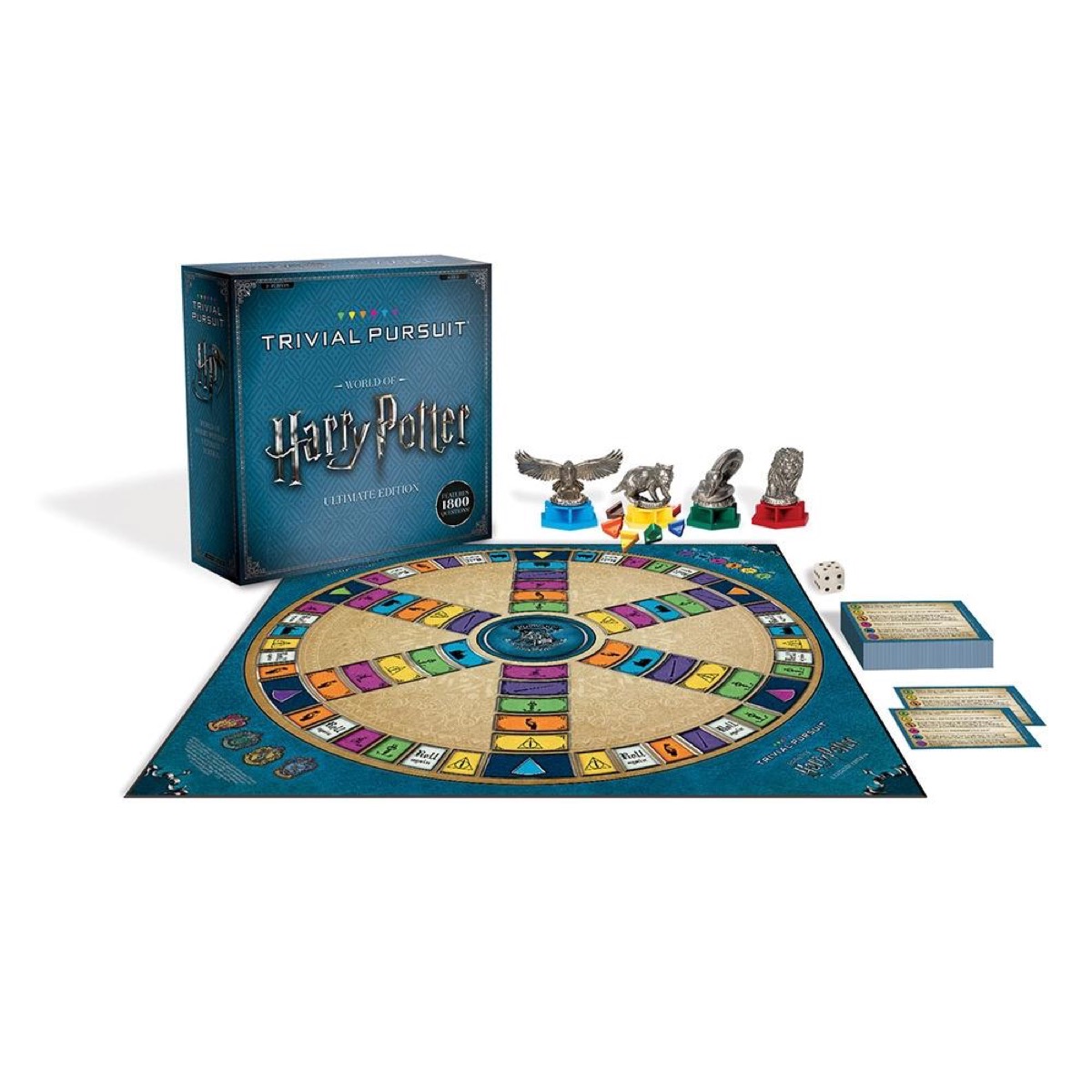 15
A Terrific Tour of the Warner Bros. Studios

If you know a Potterhead who's heading to London in the near future, make their trip extra special by gifting them a tour of the place where all the magic happened: the Warner Brothers London Studio. There, they'll be able to get an in-person glimpse at some of the film's most iconic sets, props, and costumes, as well as learning about how the film crew was able to bring everything in the film to life behind the scenes. 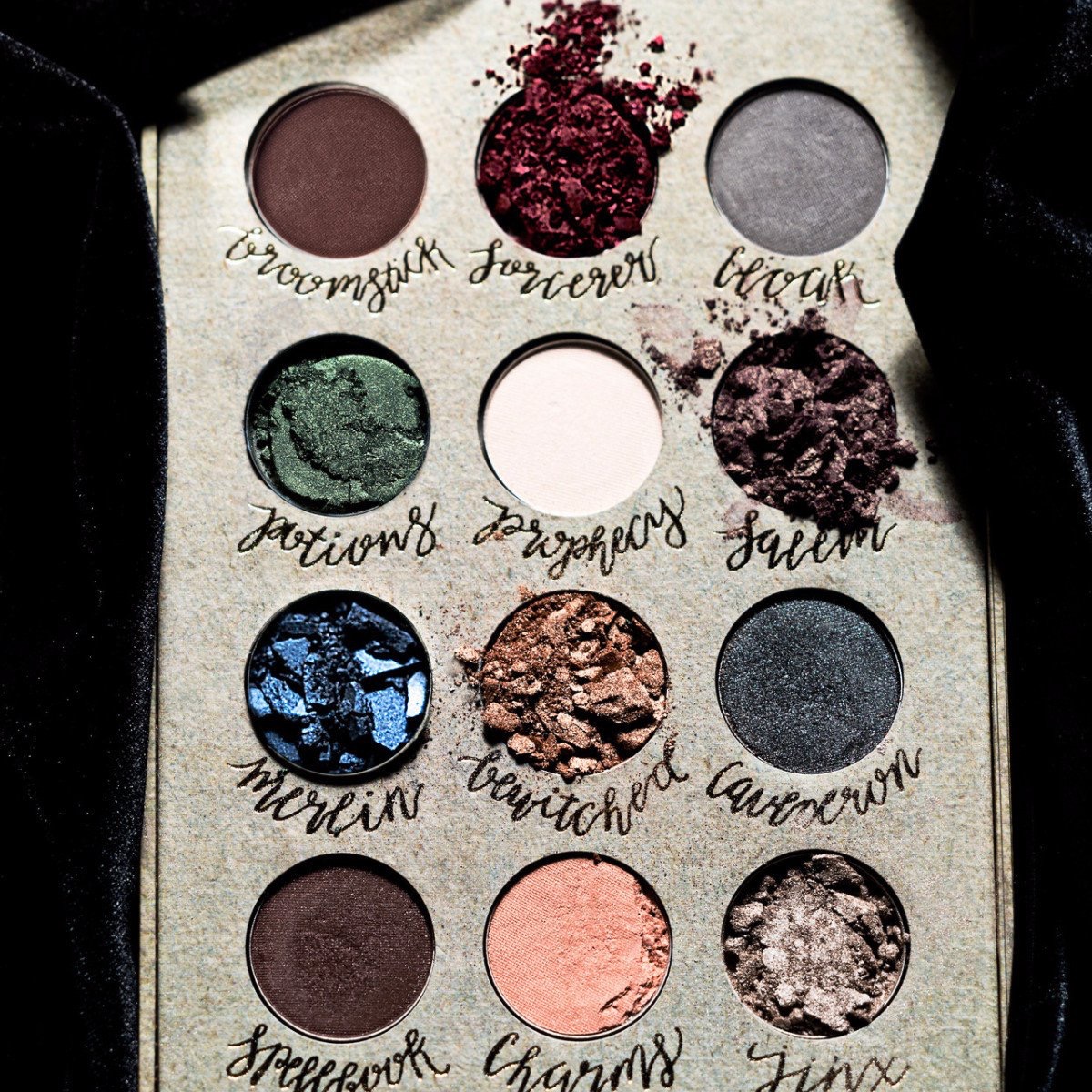 Though this Harry Potter-inspired eyeshadow palette won't magically perfect her makeup skills, it will give its recipient the shades necessary to create some seriously sultry looks this holiday season.

17
And Liquid Lipsticks For Every House 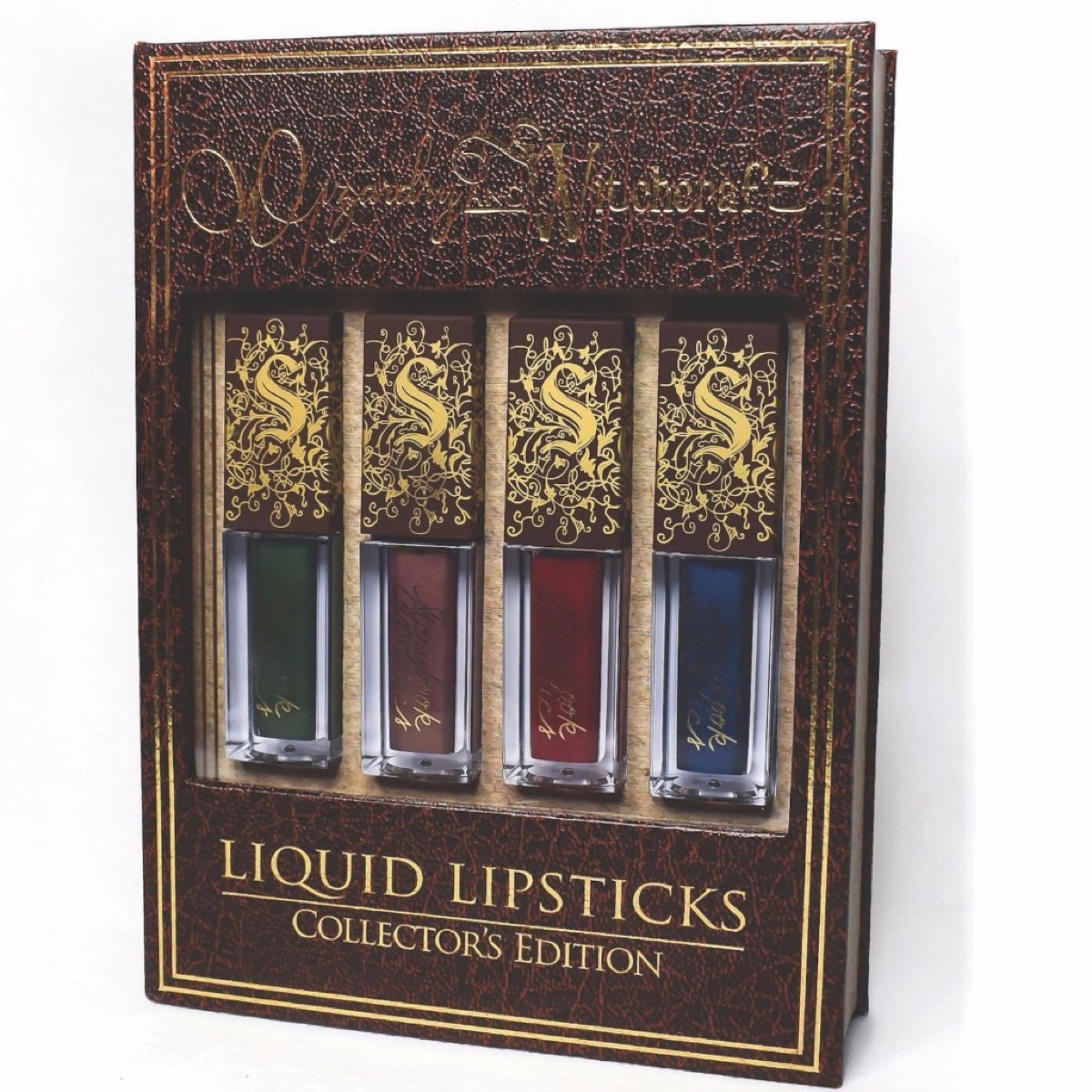 If she prefers bold lips to bold lids, then opt instead for this liquid lipstick four-pack. Not only does it come packaged in a collector's edition hardcover book case,  each shade is also aptly named after something in the Harry Potter universe. 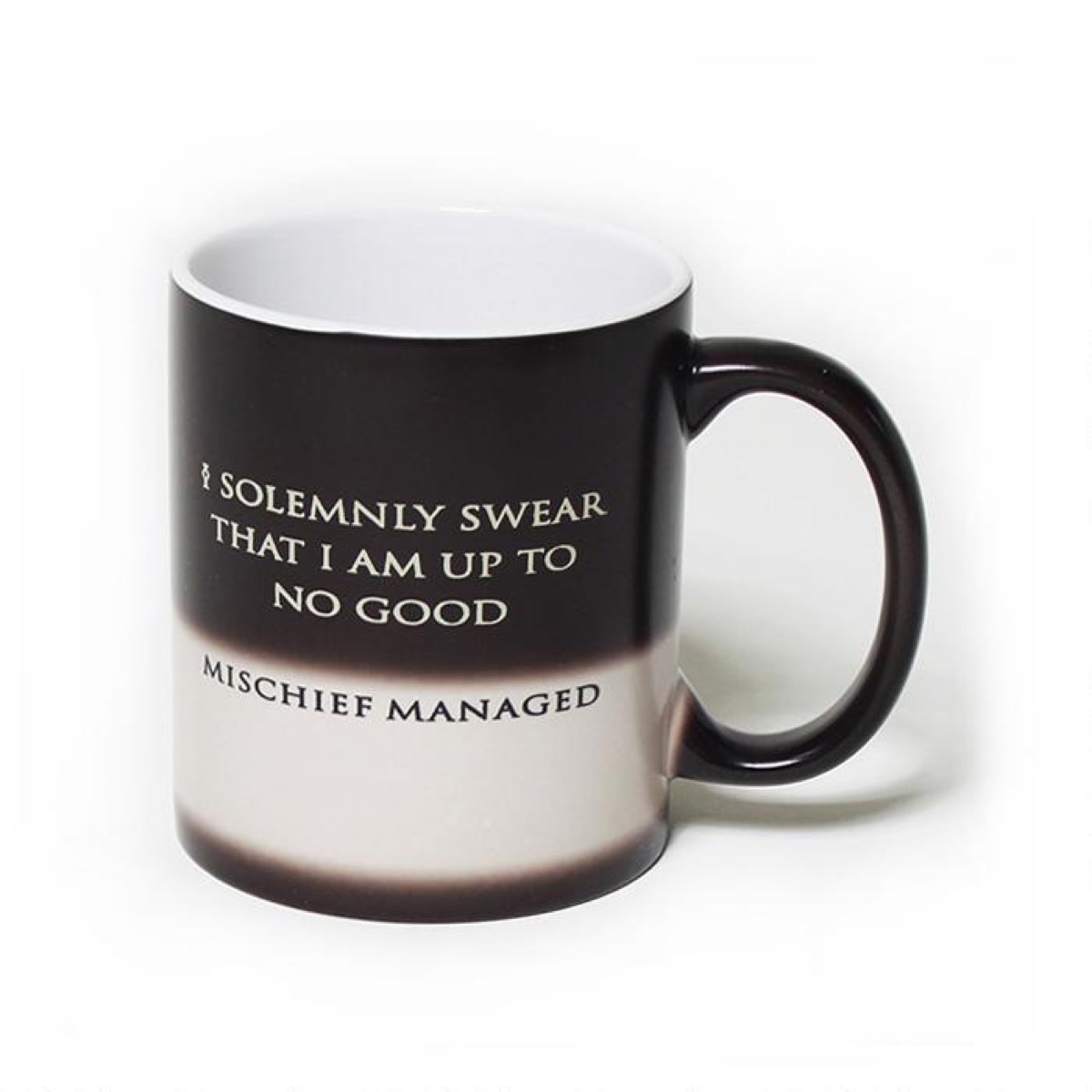 Give the muggles you know a little taste of the wizarding world with this peculiar pattern-changing mug. All you have to do is fill the cup with warm liquid and before you know it, the text on the mug will morph from "I SOLEMNLY SWEAR THAT I AM UP TO NO GOOD" to "MISCHIEF MANAGED"—a familiar set of phrases to anyone who's ever read the Harry Potter series. 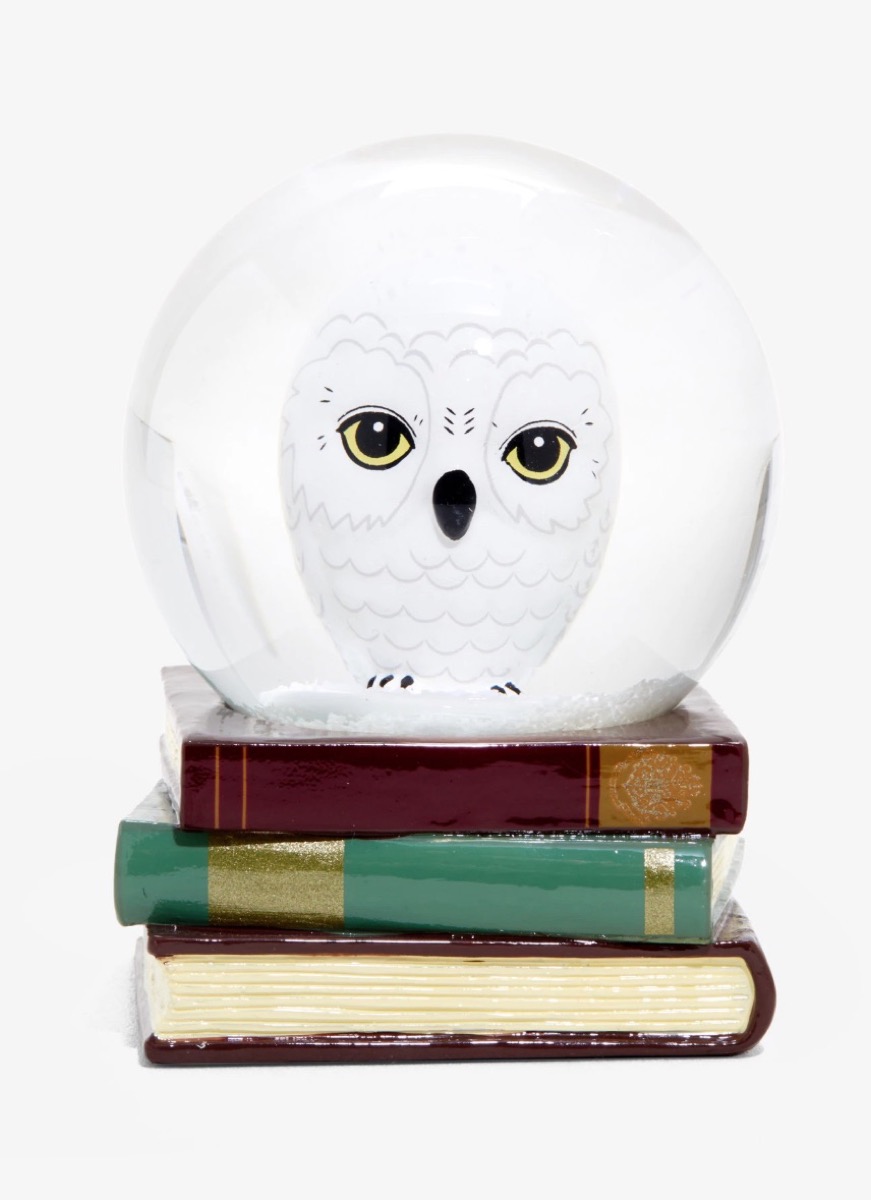 Keep the memory of Hedwig (RIP) alive with this book stack snow globe from Hot Topic. At just $20, this owl accessory is the perfect stocking stuffer for every Hogwarts student on your shopping list. 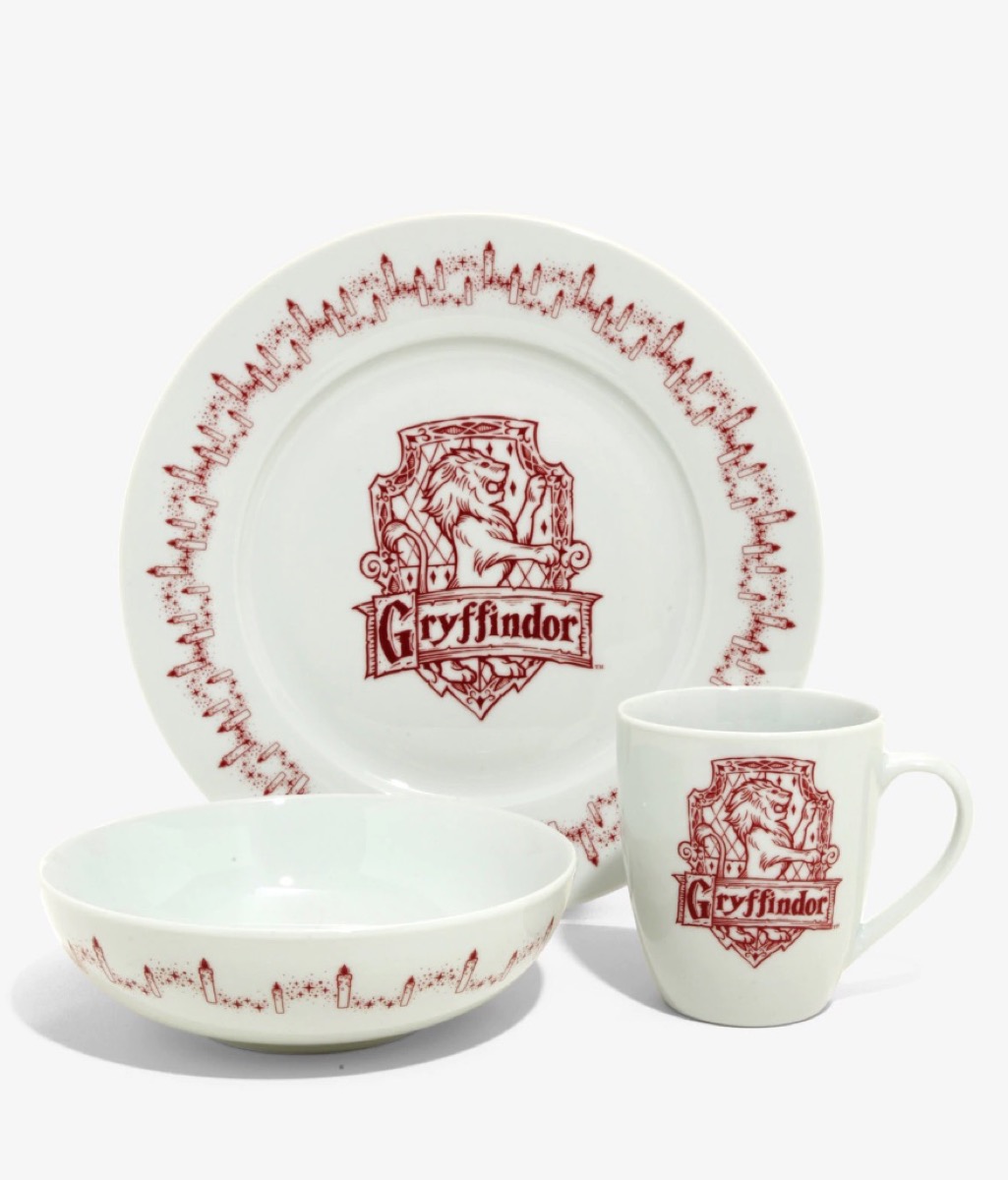 Whoever eats with these house crest-adorned plates and bowls will have the ultimate pleasure of feeling like they're dining in the Great Hall. Talk about a magical meal! 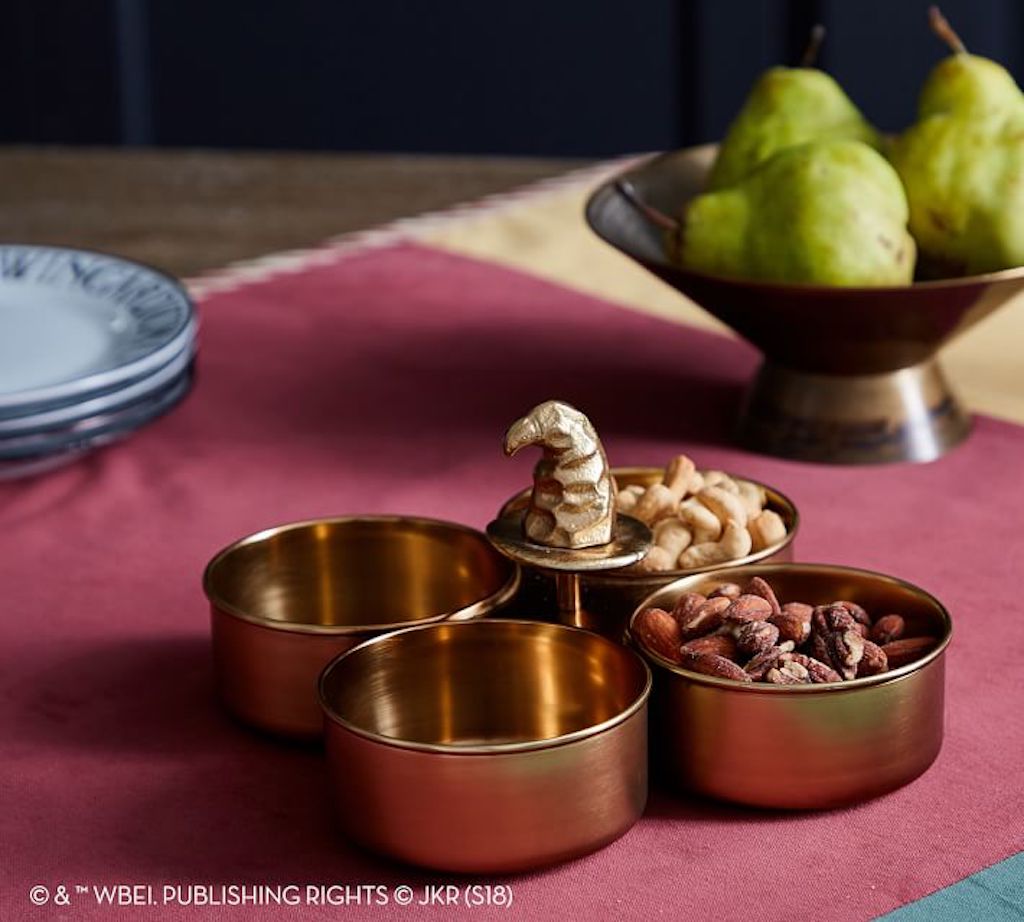 This stainless steel sorting hat snack server is ideal for the hostess with the mostess who's secretly still waiting for her Hogwarts letter. And with four different serving bowls and an antique gold finish, this tray is just as functional as it is fun.

22
A Vial of Liquid Luck

If you know someone who's struggling with stress or getting ready to go through a huge, life-changing experience, then a small vial of Felix Felicis, or Liquid Luck, is exactly what they need. Though it might not work exactly like it does in the books, even just the idea of wearing luck around your neck is enough to turn anxiety into excitement. 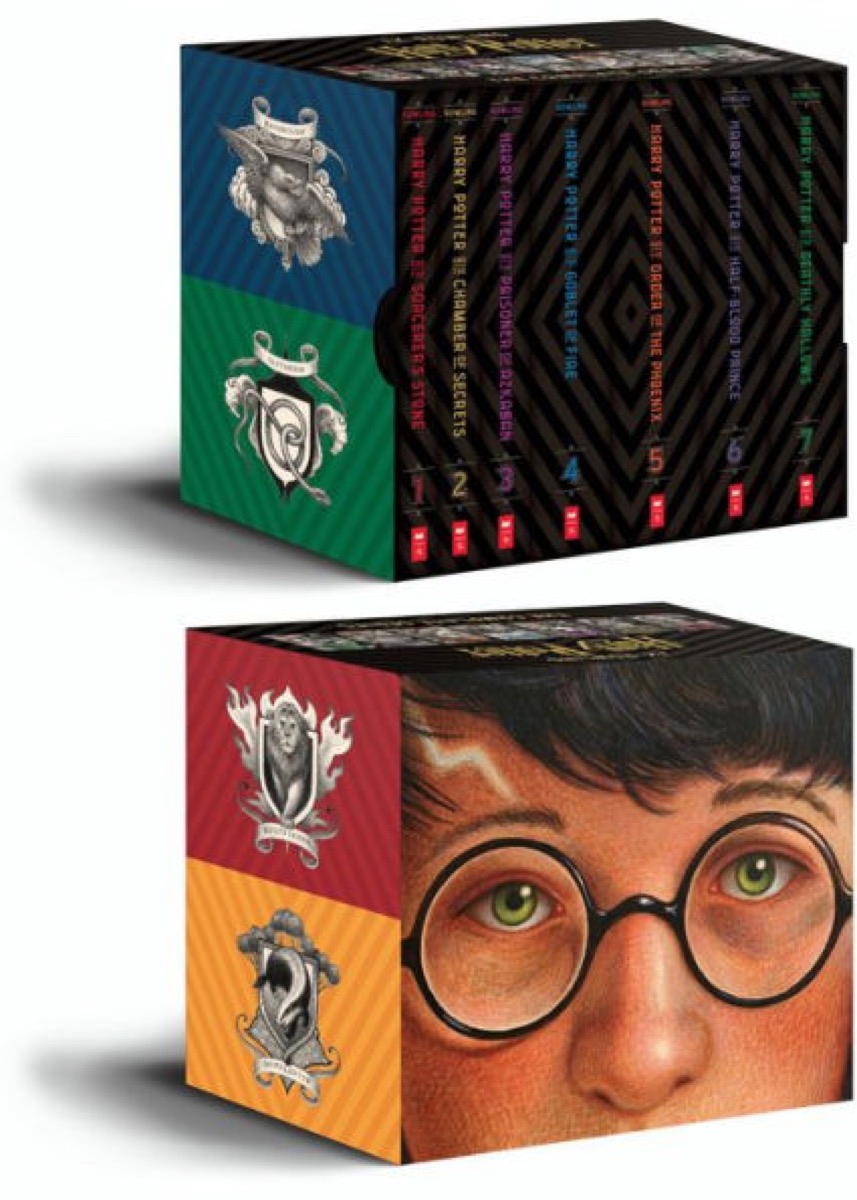 There's no such thing as having too many copies of the Harry Potter books. Plus, this box set is special: It contains special illustrations from Brian Selznick in honor of the 20th anniversary of Harry Potter and the Sorcerer's Stone. 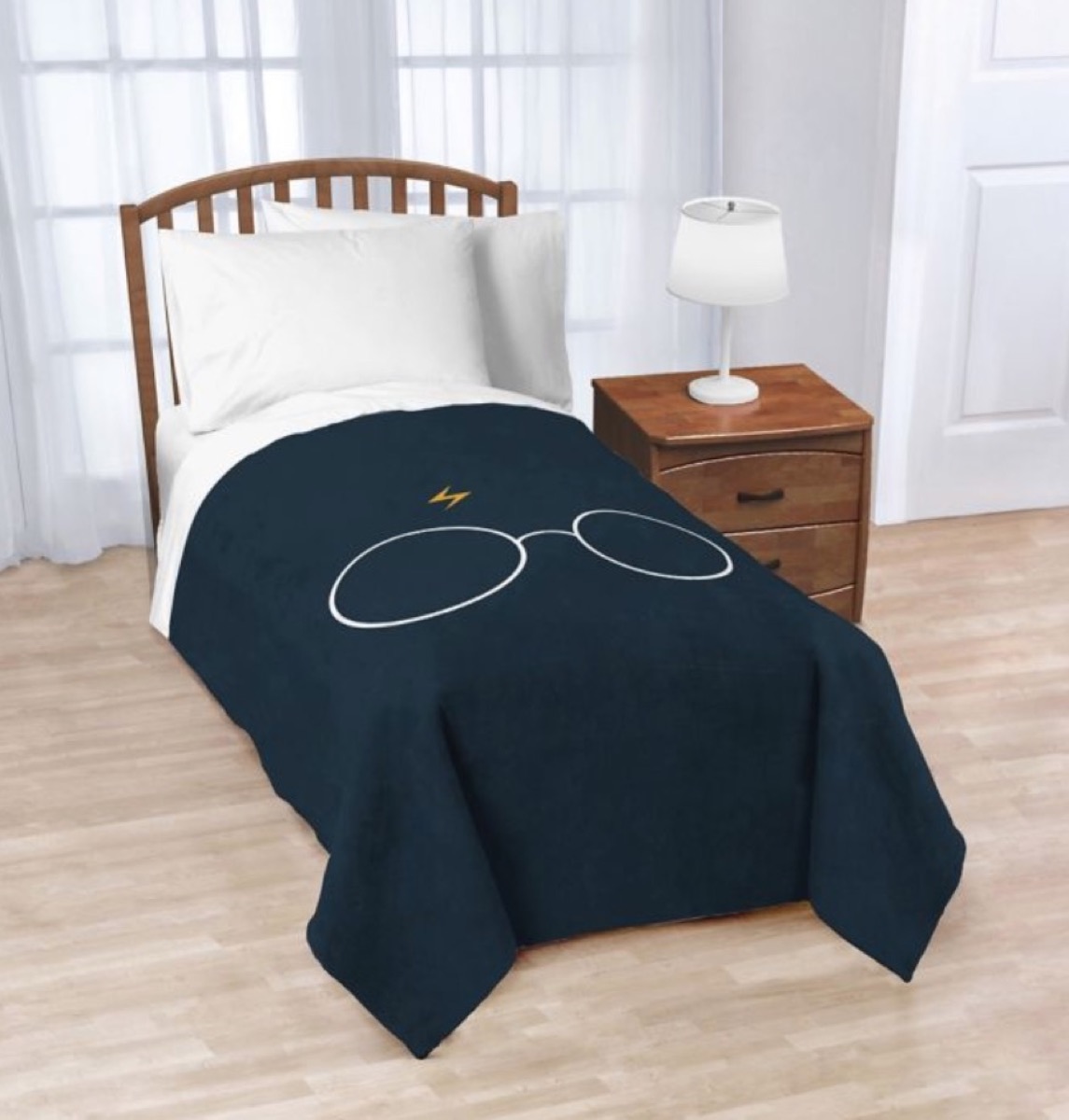 All you need is a cup of tea and a good novel (any Harry Potter book works!) to put this Harry Potter throw blanket to good use. And to make your life easier, the soft polyester blanket comes prepackaged in a gift box, so all you have to do is make your purchase and you're good to go!

25
A Jar of Bertie Bott Beans 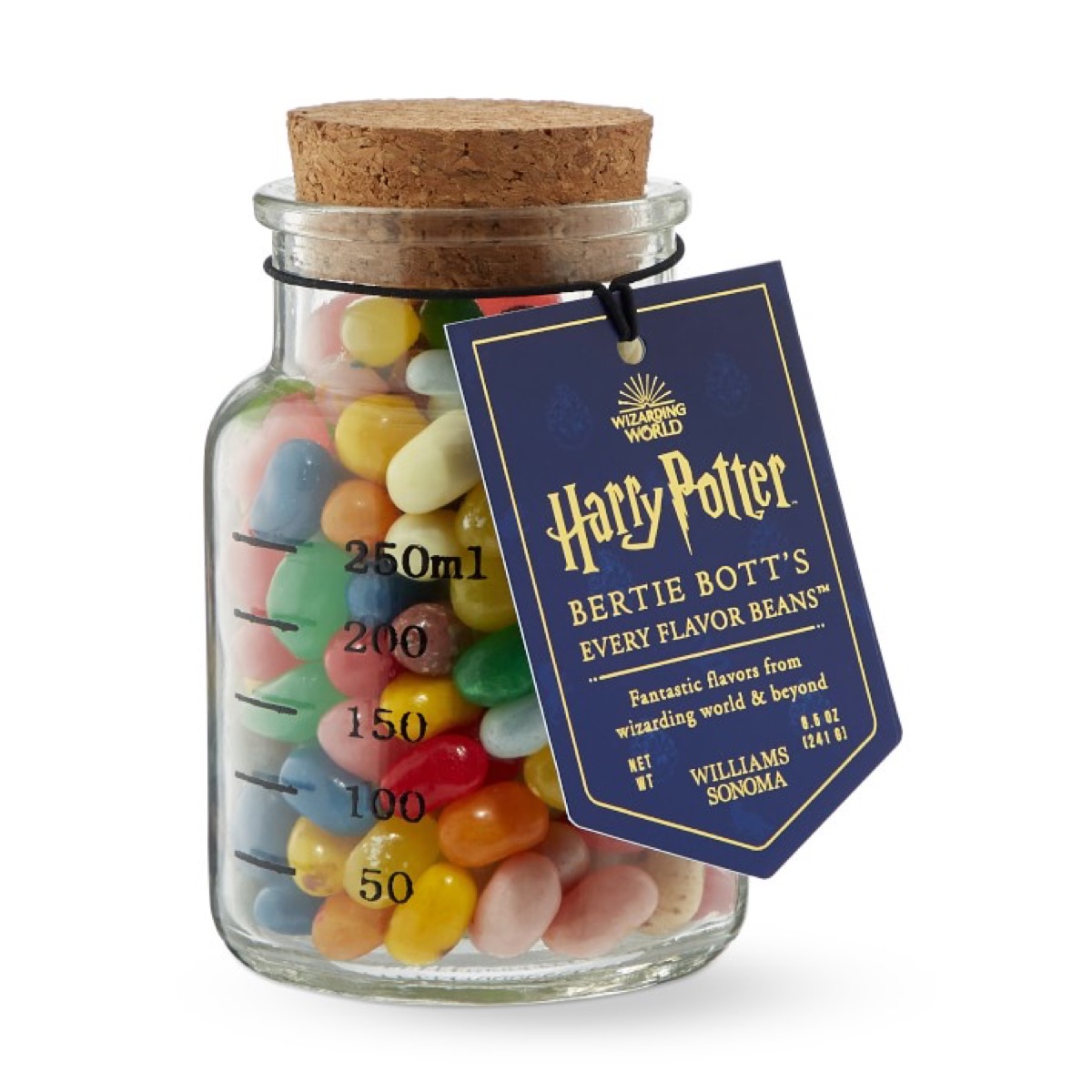 These Harry Potter Bertie Bott Beans are not your everyday candy. Sure, some of the yellow beans in the jar taste like your typical lemon jellybeans—but you have to be careful, because some of them are also flavored like rotten eggs. Of course, that's what makes eating these candies so fun—and for your Potter-loving friend with a sense of humor, this is a great little gag gift. 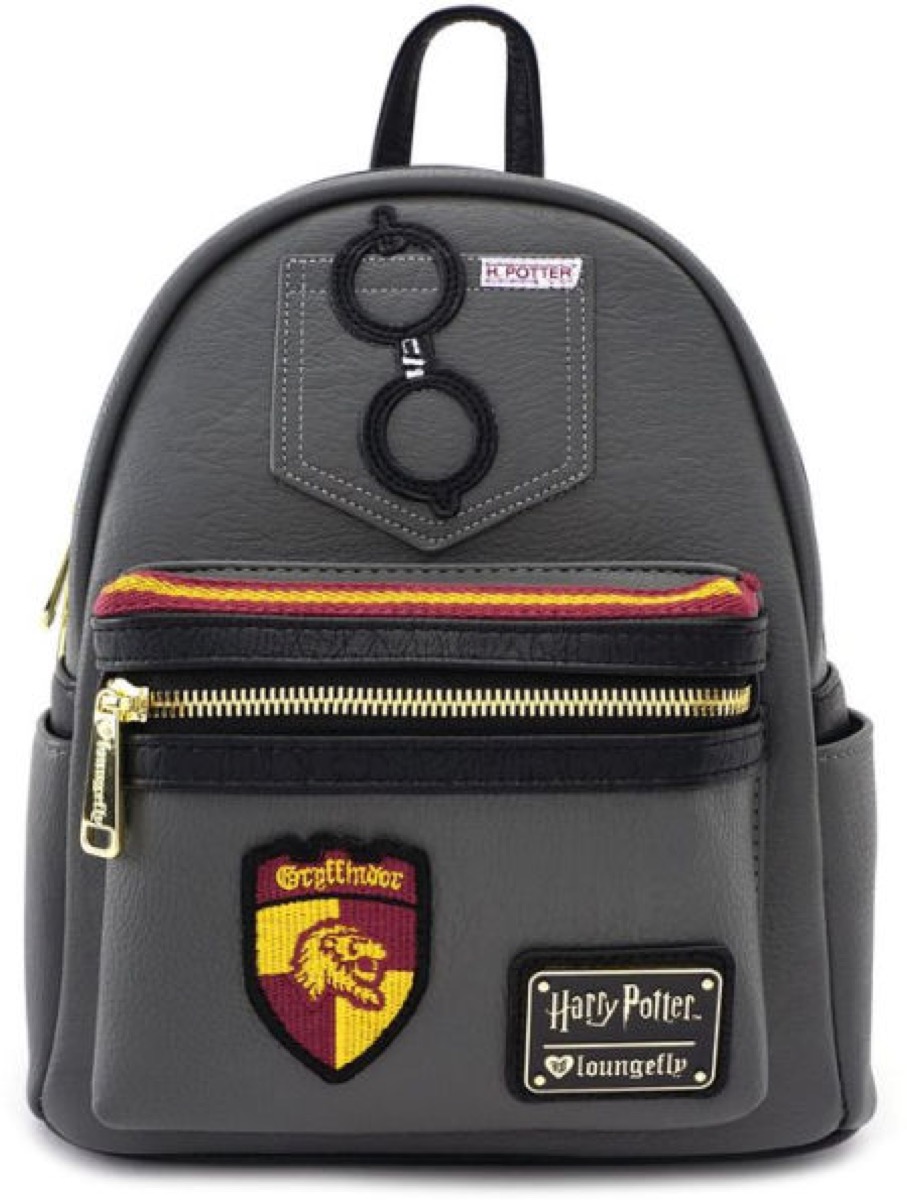 The Gryffindor gal on your shopping list will appreciate being able to showcase her fearlessness and fashion sense simultaneously with this house-crest-adorned backpack. Though petite, this satchel is just large enough to carry your essentials—with enough room left over for your wand.

These hand-painted custom Vans feature some of the most iconic imagery from the Harry Potter films, including Professor Snape's patronus and the Golden Snitch. Since they are handmade, though, they do take a bit of time to customize, so make sure that you order your pair well before December 25th! 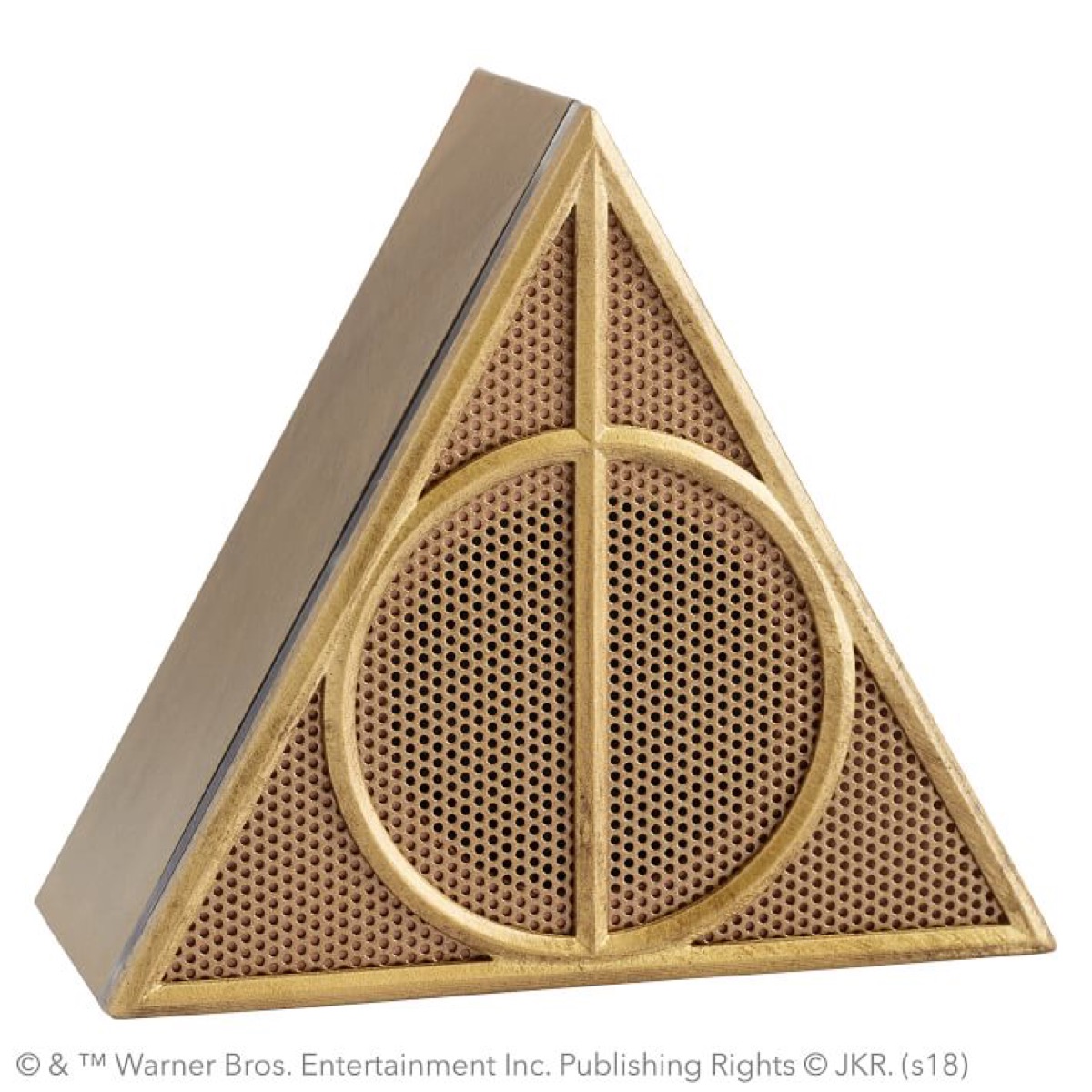 Though it seems like it runs on magic, you actually have bluetooth technology to thank for the powers of this Deathly Hallows-inspired wireless speaker. 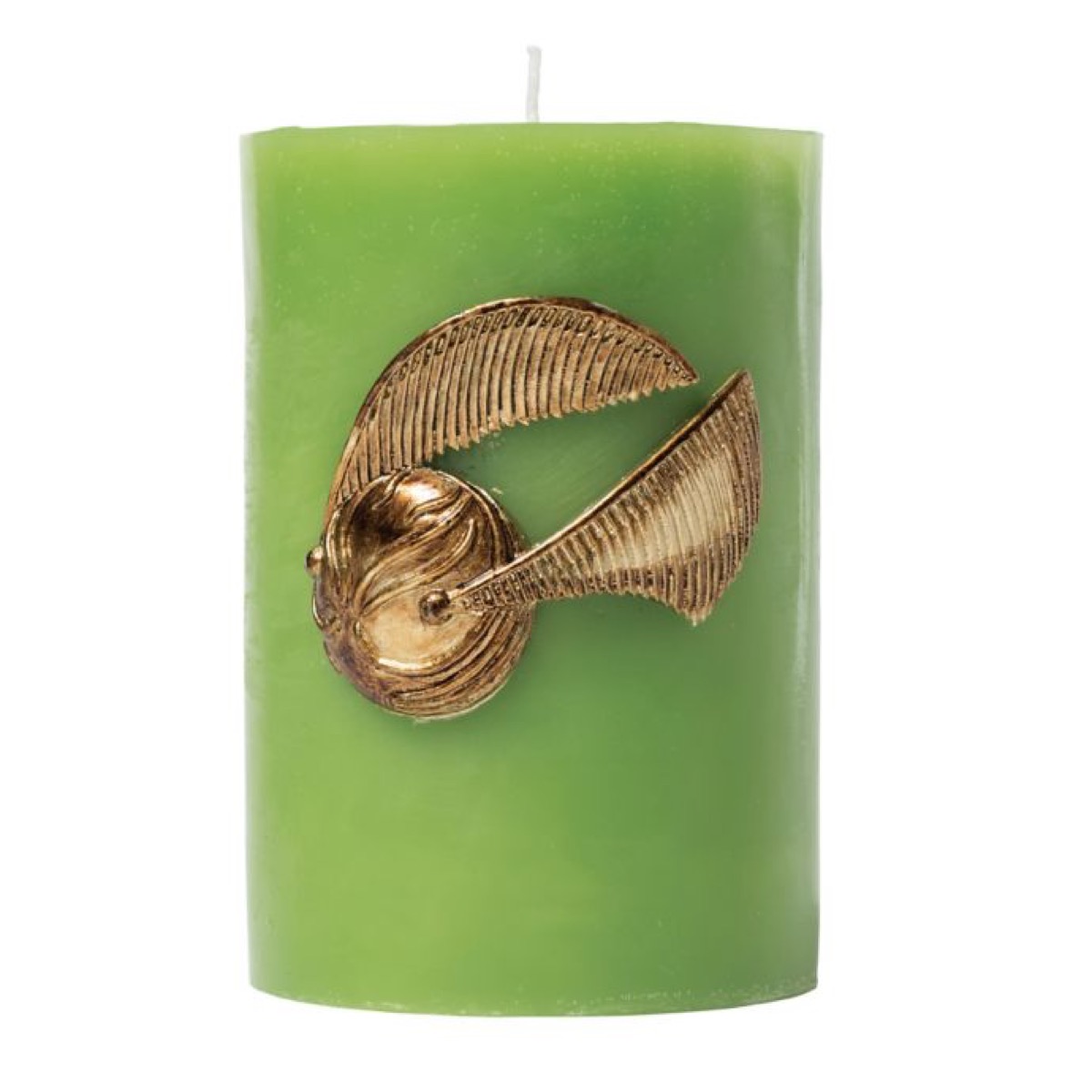 This green pillar candle features a gilded Golden Snitch insignia, making it the perfect decorative gift for hosts and hostesses alike. Plus, with a burning time of 70 hours, this candle can be a consistent bright spot in its recipient's life, even in the darkest of times. 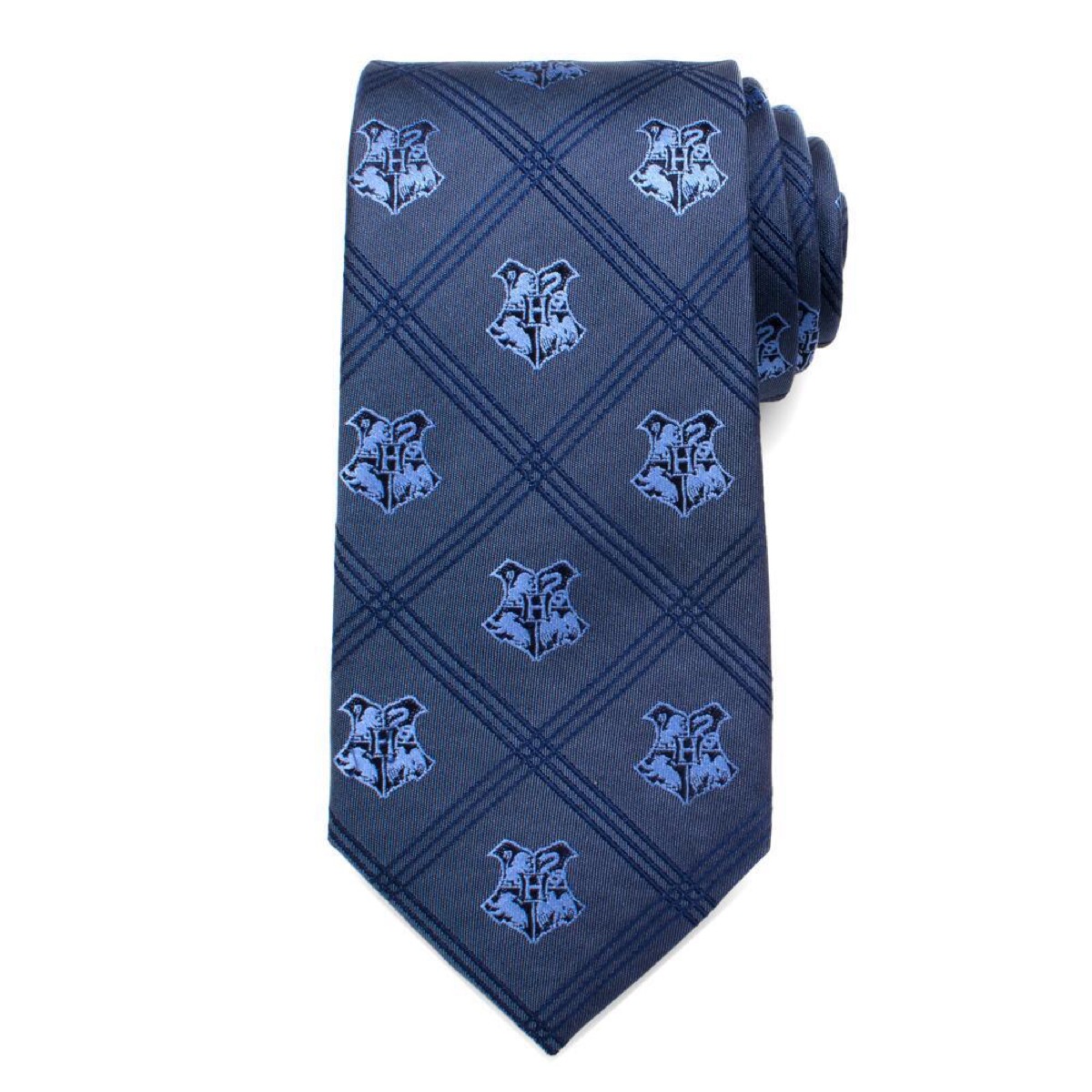 Make any formal occasion a little bit more fun with this plaid bowtie featuring the Hogwarts crest. Though it's chock-full of Harry Potter spirit, its design is simple enough that it can be worn around the office without your wizarding identity ever being discovered by the muggles in the room.