Think you were cool without these? Not even.

What did a cool kid in the 1980s look like? If you imagined Ferris Bueller, or Jennifer Beals wearing an oversized sweatshirt in Flashdance, you hit the nail on the head. But it wasn't always about the way they acted—though Ferris very much embodied the devil-may-care charm that every teenage boy wished they possessed—but rather having the right accessories.

Was your perm big enough? Your clothing neon enough? Your parachute pants still smoking from your latest breakdance challenge? Anybody could be cool in the '80s, but you had to know where to shop. From toys to fashion, here are 20 things every kid whose future was so bright they had to wear shades made sure to own. When the Sony Walkman first became available in the early '80s, it was like science fiction. We could listen to our music anywhere? Even out walking on the street? And it didn't require carrying around one of those cumbersome boomboxes? Obi-Wan Kenobi himself couldn't have imagined a future this magical.

The brilliance of the Members Only jacket is that it promised exclusivity when in reality it offered nothing of the kind. When a cool kid wore a Members Only jacket, they were presenting themselves as part of an elite clique of social insiders. But, really, the jacket only signified that their mom knew where the shop in the mall. However, that didn't mean we didn't wish to wake up with one under our Christmas tree. Before he was an NBA champ, Michael Jordan was the namesake of this wildly popular sneaker that every basketball-loving kid owned (or dreamed of owning). Launched in 1984, after Jordan won a Gold Medal at the Olympics, Jordan signed a 5-year, $2.5 million contract with Nike that led to one of the most iconic and sought-after shoe brands in footwear history.

A handheld Parker Brothers game that looked like a red cellphone, Merlin was designed by a NASA scientist who apparently thought, "Flying to the moon is fine, but what the world really needs is a more awkward way to play tic tac toe."

It combined the nerdy appeal of baseball card collecting with the desire to be the grossest person in your social circle. If you couldn't find the humor in Adam Bomb, the kid with a mushroom cloud exploding in his head, or Dough Boyd, a Pillsbury Doughboy knock-off whose body produces cupcakes, then you were probably not the cool kid in your peer group. 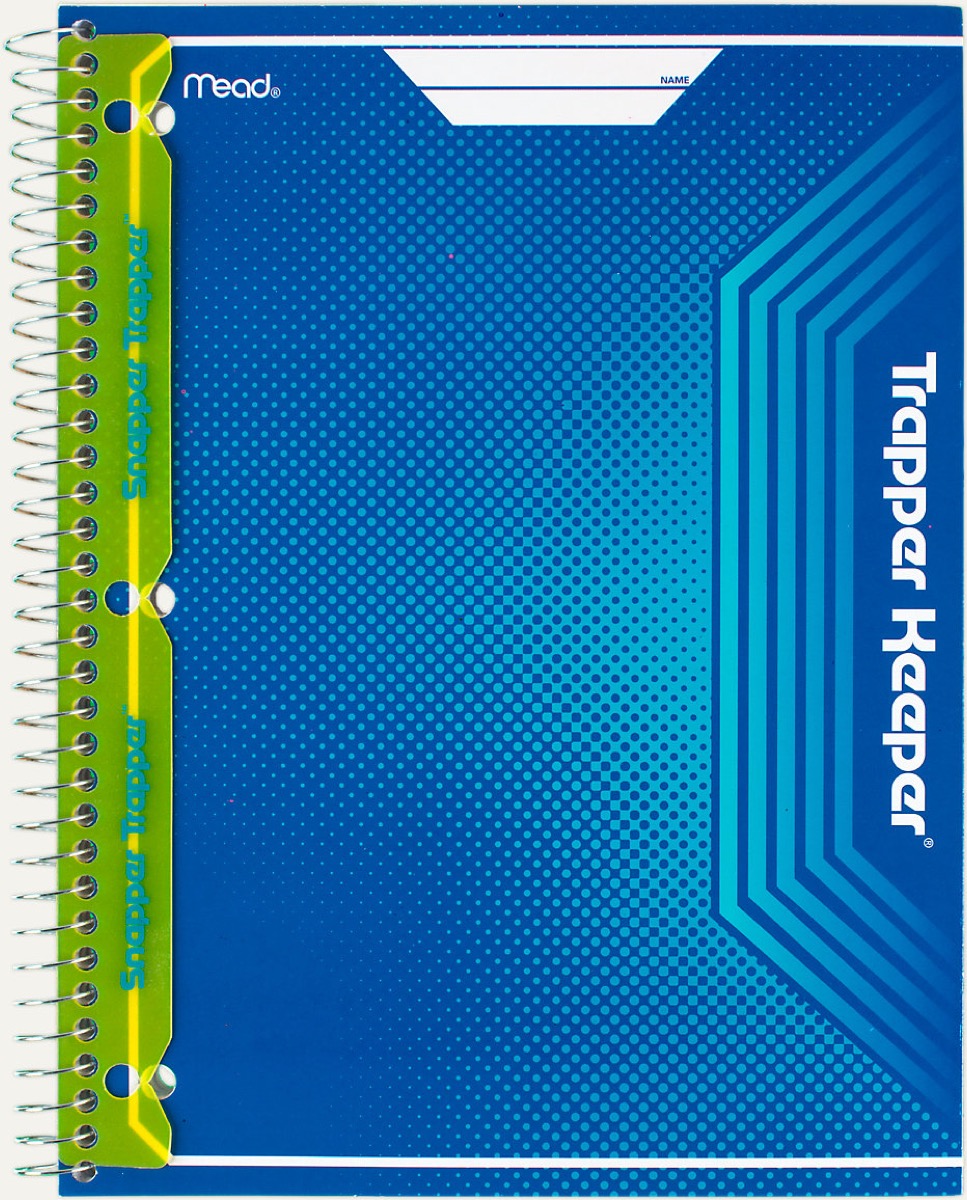 An '80s kid would have rather gone to school with a bindle than without that trusty three-ring Trapper binder ($6) with the flap in the front. That satisfying riiiip when you opened the velcro meant that your belongings were completely secure from prying eyes.

Few managed to solve it, but every kid in the '80s was obsessed with this cube-shaped puzzle. We carried them everywhere, from our homes to school and back again, twisting and turning in hopes of finally finding the right combination of colors. It was such a phenomenon that it spawned its own short-lived show, Rubik, the Amazing Cube, about a talking and flying Rubik Cube and his posse of crime-solving kids. And if you're looking to finally crack the code, This Is the Secret Trick to Solving a Rubik's Cube Quickly. It wasn't just a way to play your favorite tunes on cassette—you could also record with it! Sometimes that meant taping our favorite songs off the radio—it was the torrent sharing of its era—and even capturing your own voice belting out the hits. These players were so beloved by '80s kids that one genius even converted his old Fisher Price into a Bluetooth speaker.

It was like having an arcade in your very own living room. Sure, the graphics were horrible, but no one cared. Any kid lucky enough to have his own Atari 2600 was the most popular person in his neighborhood, with friends and would-be friends lining up outside his or her door for the chance to play Pong, Space Invaders, Breakout, or Pitfall! 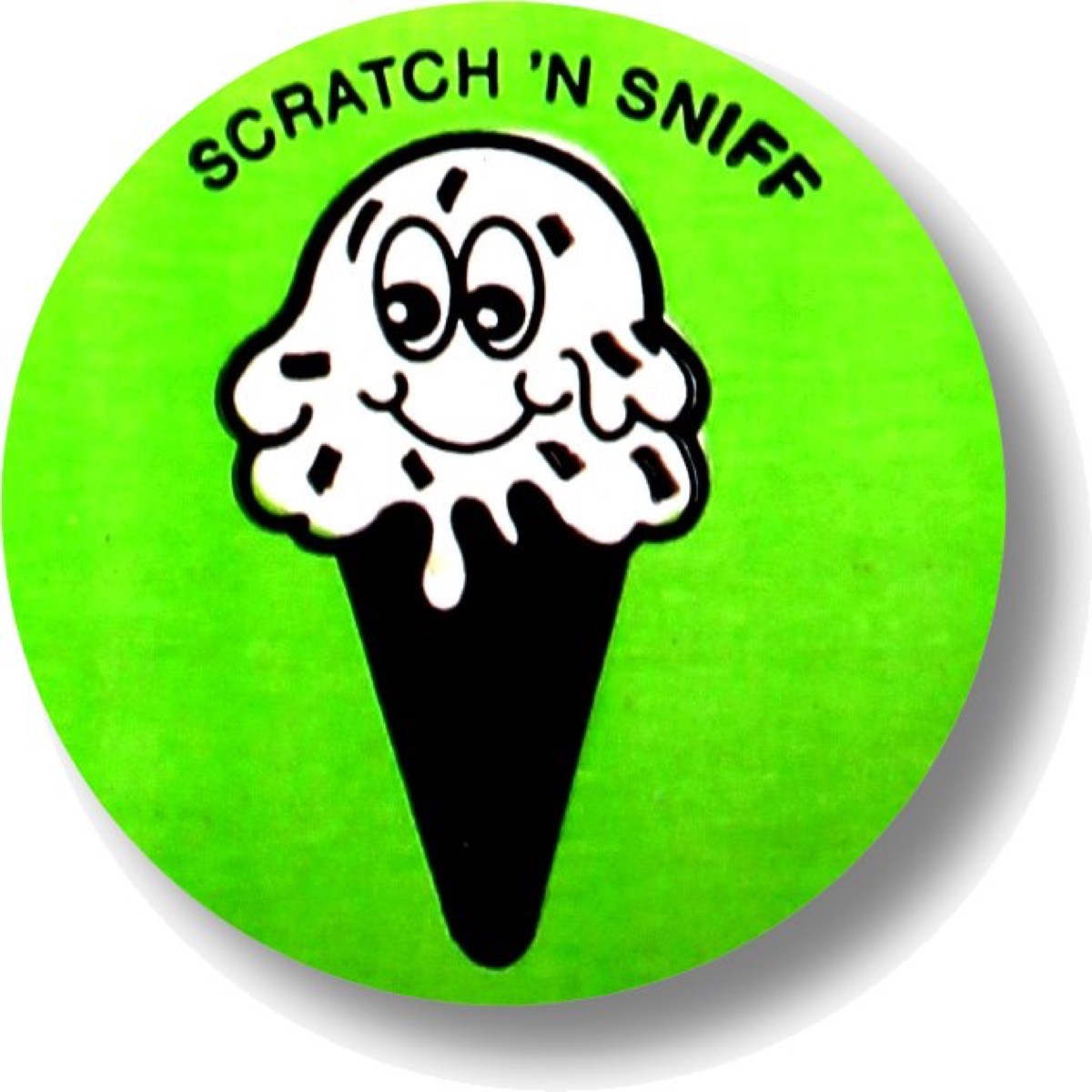 Sticker technology in the '80s had their Apollo 11 moment with scratch-and-sniff. These stickers didn't just come with delightful illustrations, but scratching them with a fingernail would release a fragrance that was… well, at least close to what the drawing represented. Is there anything more mind-blowing to a kid (at least an '80s kid) than scratching a sticker declaring that it's "Grape Stuff" or has "Melon Power" and then smelling something that's vaguely in the same odorous ballpark of real fruit?

Your mother may've been fine with gently putting on jewelry, but the '80s kid wanted something with a little more gravitas. These bracelets may not have been the most attractive accessories, but they more than made up for it with theatrics. After all, like the name implied, a slap bracelet could only be put on by SLAPPING IT against your wrist, which just looked (and sounded) so cool. Wearing a slap bracelet made every kid feel like a superhero from the future. 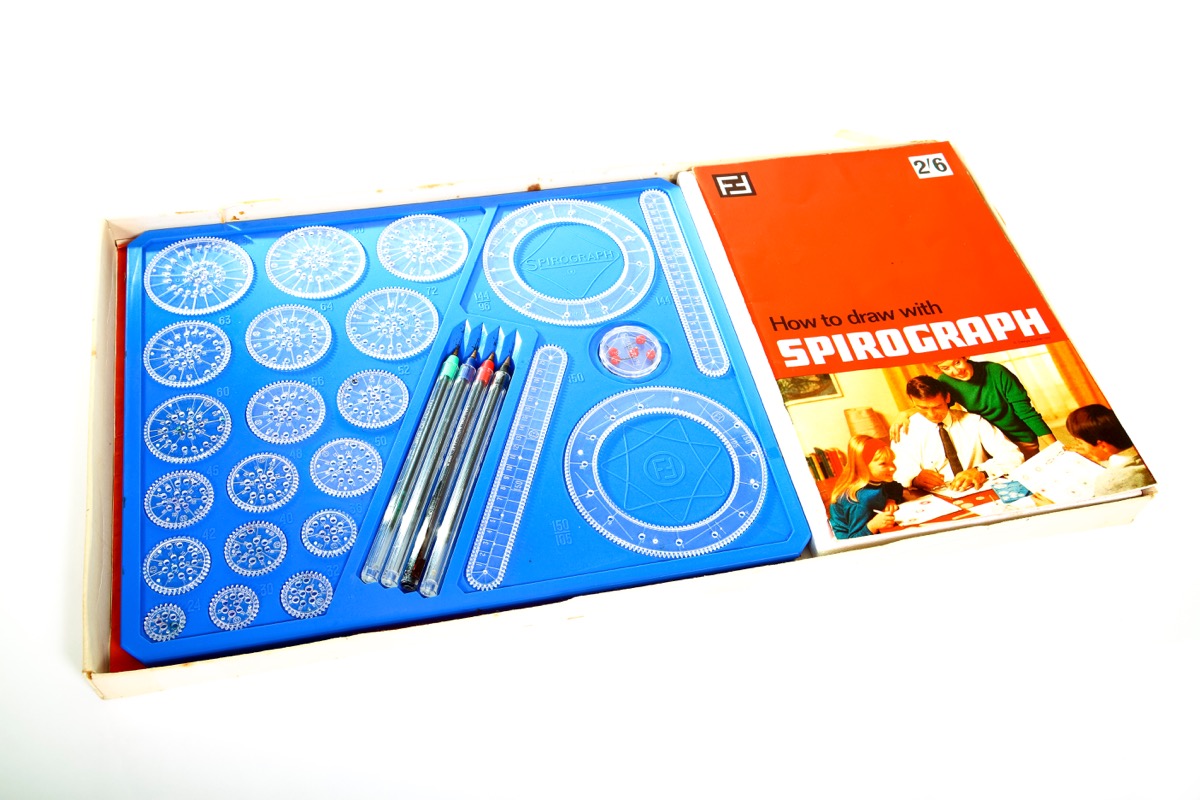 It was just a bunch of plastic circles with holes in them, but this deceptively simple crafting aid could turn anybody into an instant artist. Hasbro billed it as "a geometric drawing toy that produces mathematical roulette curves," but that doesn't begin to explain why these things were so addictive. With a few colored pencils, you could create designs that were downright mesmerizing, and briefly convince yourself that maybe you had a future as your generation's Monet. 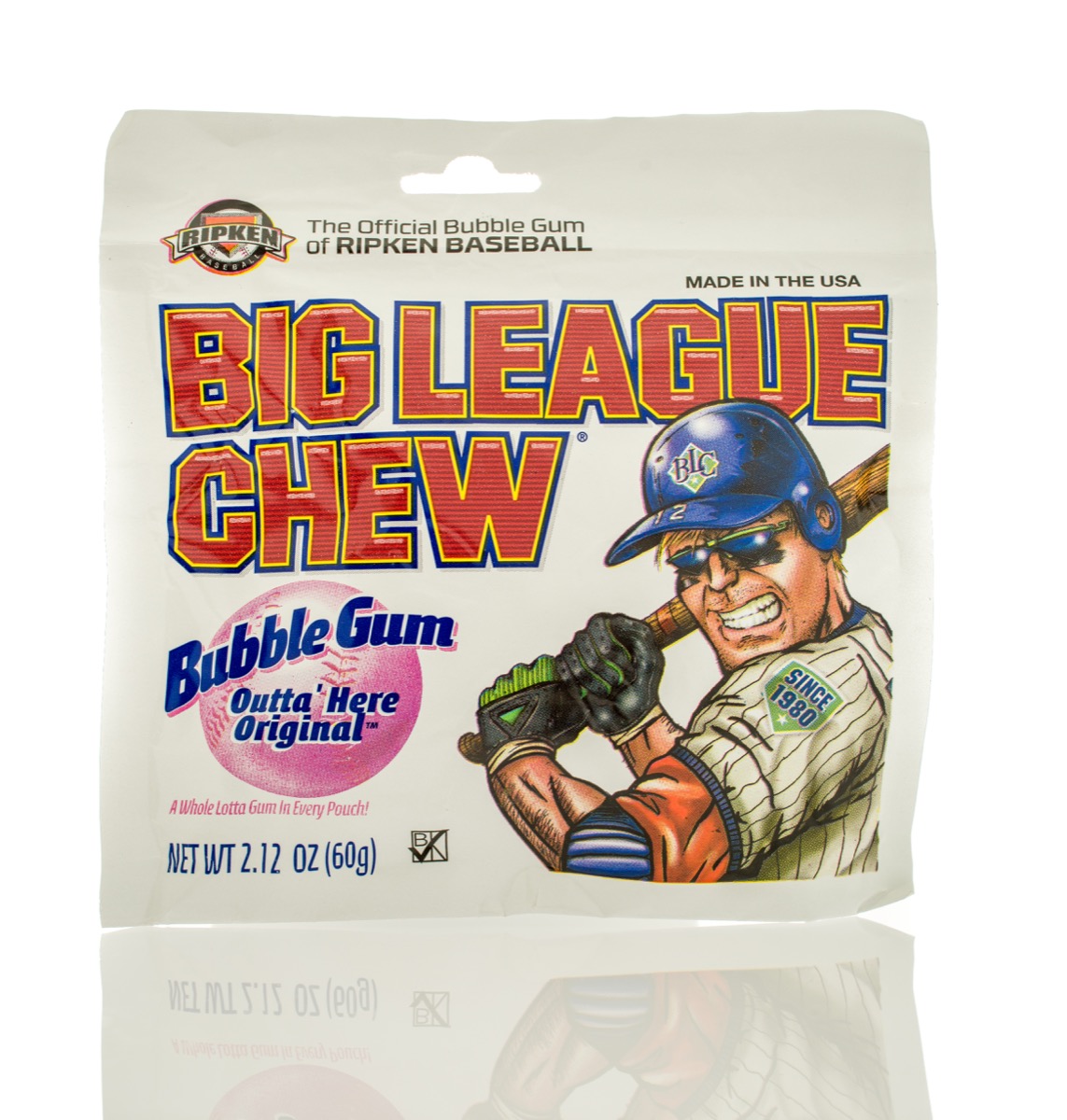 Gum with the consistency and heft of chewing tobacco—it was shredded and came in a big aluminum foil pouch—Big League Chew felt somehow more significant than mere bubble gum. "You're in the big leagues when you're into Big League Chew," the commercials reminded us. We would definitely agree… if we could only move our jaws with all that gum lodged in there. 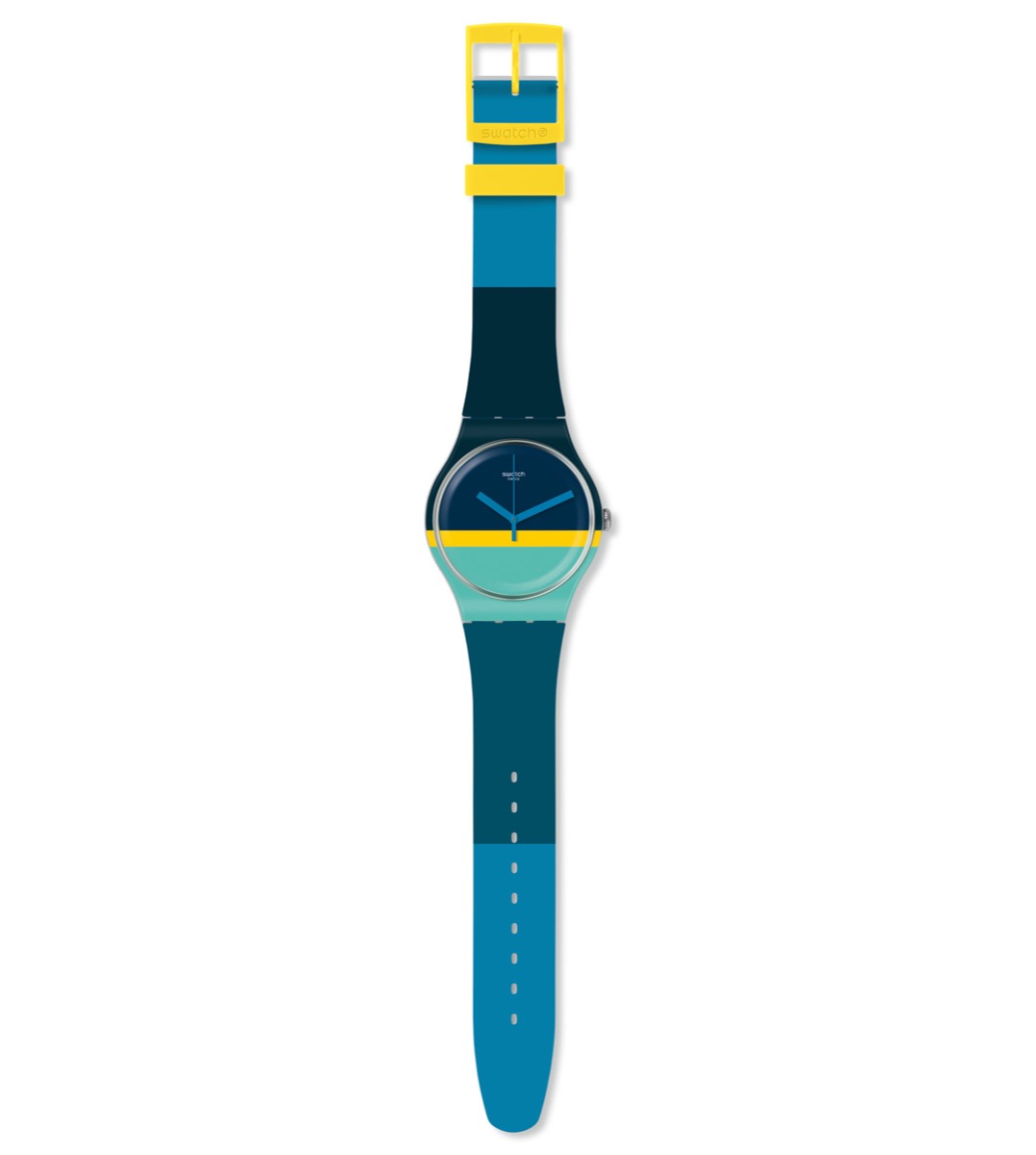 Created by a Swiss watchmaker in the early '80s, these colorful and tubular timepieces became essential for any '80s kid who wanted to stand out. Not only did they look cool, but they were also super affordable for a preteen on a budget. Even today, you can pick up basic models for as low as as $50. 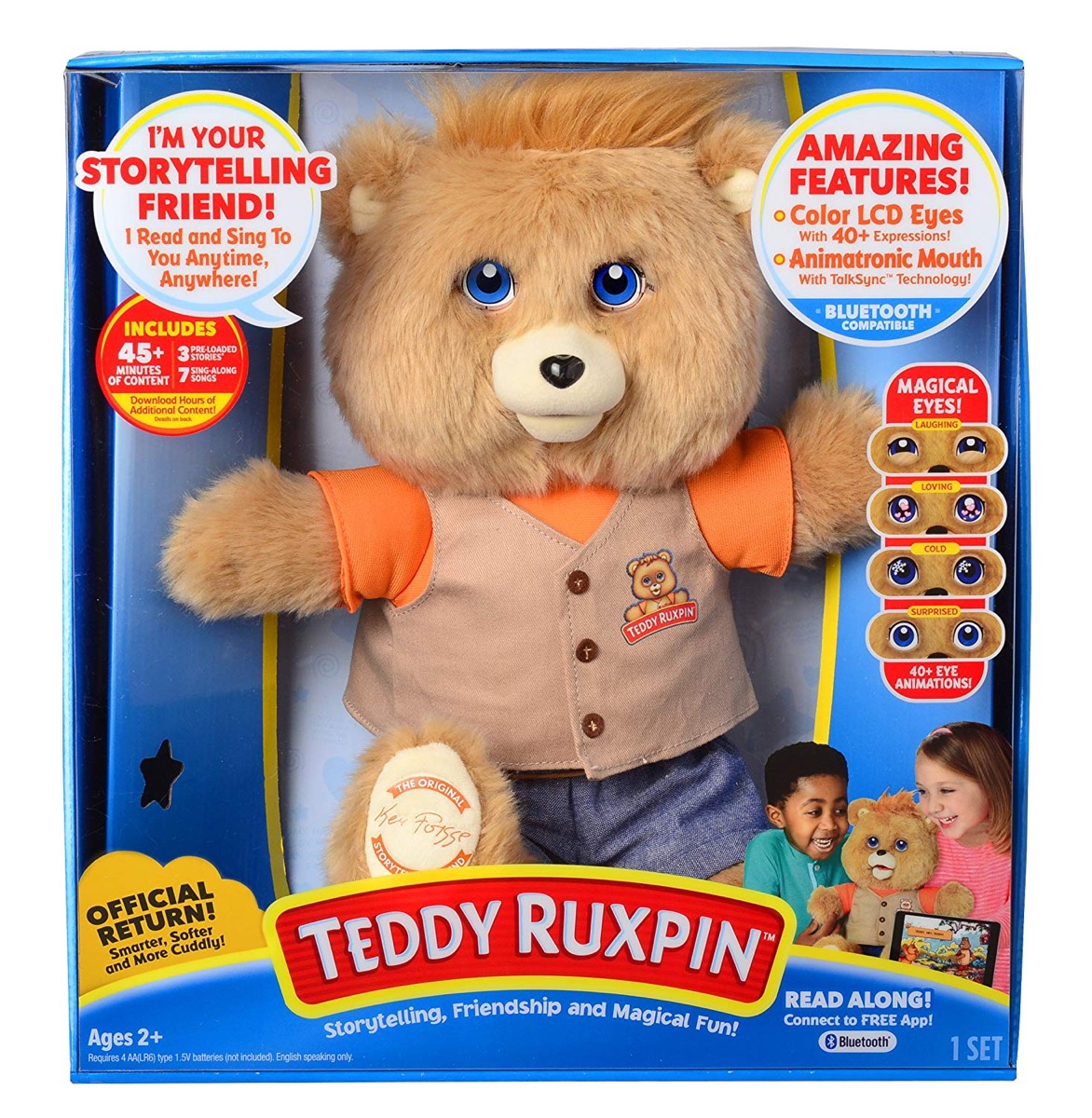 Believe it or not, there was a time when this talking teddy bear wasn't considered horrifying. Kids actually coveted the Teddy Ruxpin doll ($62) when it was first introduced in the mid-'80s. The bear didn't just talk (thanks to cassettes you put into its back) but also blinked and turned its head. So, you know, the stuff of nightmares. Today's kids mostly find Teddy creepy, and we share their distrust of talking animatronic dolls. But, if you're still holding onto one of these, that's excellent news, since they're among the 27 Silly Things from Childhood Worth Tons of Money Today. 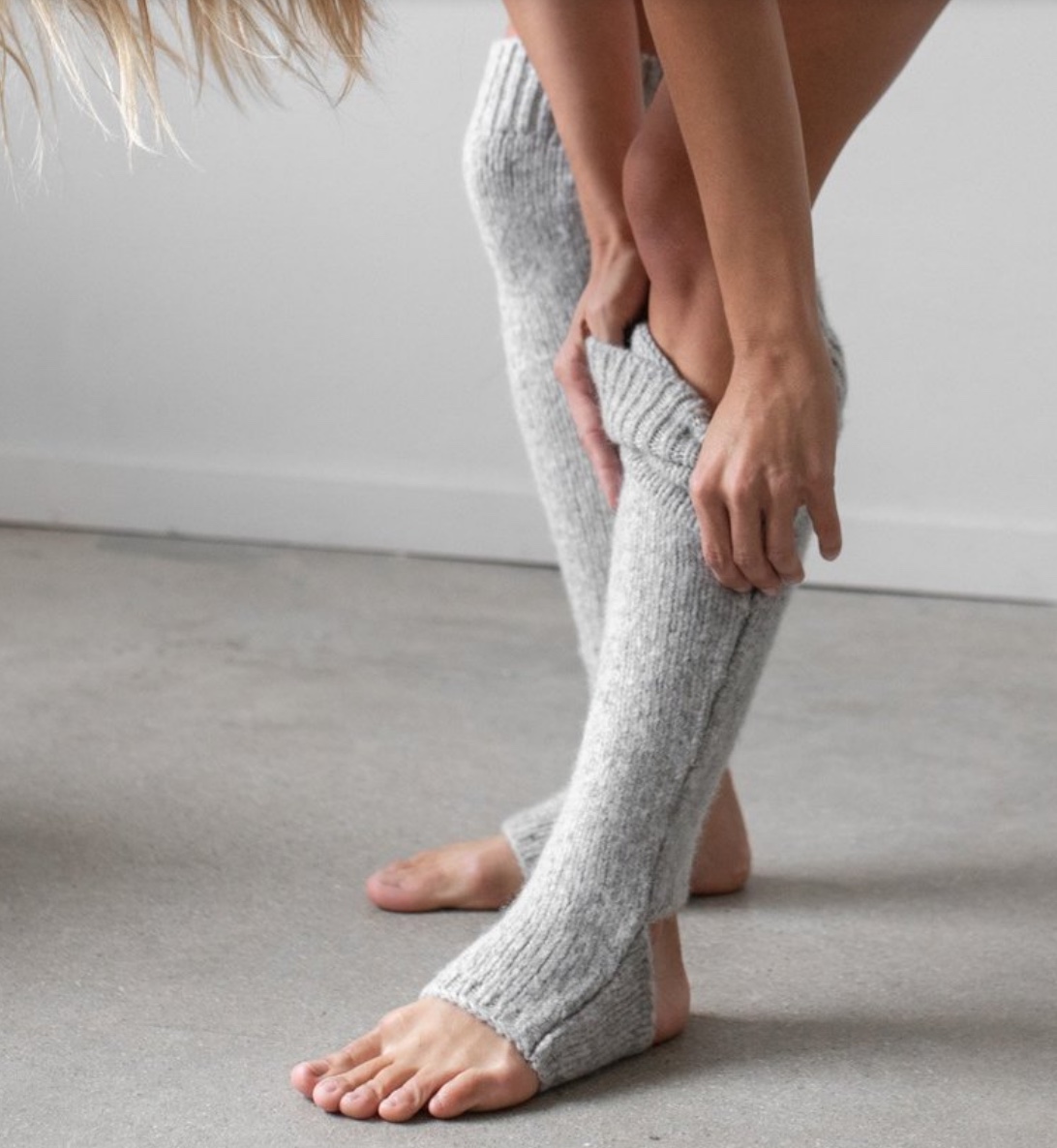 Thanks to movies like Footloose and Flashdance, '80s kids everywhere decided they couldn't live another moment if their calves weren't protected with tiny sweaters. Never mind that leg warmers had long been used mostly by dancers, to keep their legs muscles warm and prevent cramping. In the '80s, leg warmers suddenly became a fashion staple, even among people who could barely slow dance to a Journey song. A cross between a pogo stick and a trampoline, the Lolo Ball allowed a person to bounce around any room like a professional gymnast. Or at least that's what the commercials had us believe. In reality, it wasn't quite so easy to be graceful when jumping on a Lolo Ball. But that didn't stop millions of Lolo enthusiasts from trying anyway.

True to their name, they made your feet look like they'd been submerged in jello. Which… well, apparently was something that cool kids wanted in the '80s. Go ahead and toss these out if you still have a pair because they're one of the 23 Dated Fashion Trends That Will Never Come Back in Style. 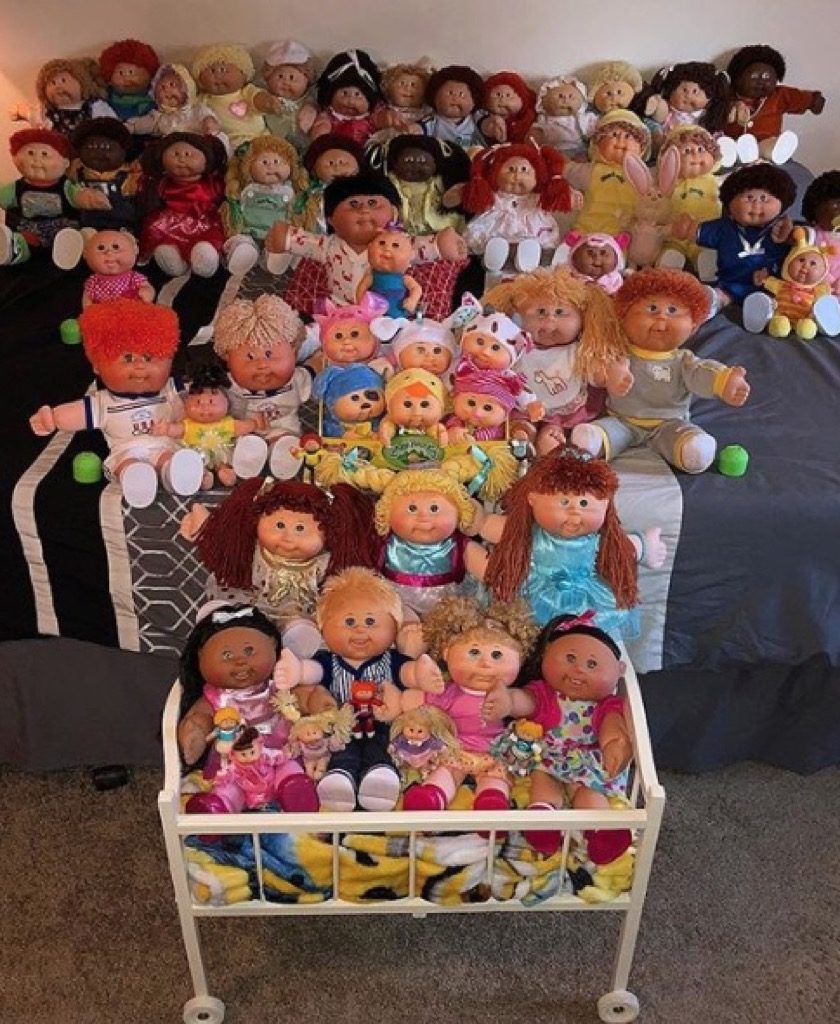 Honestly, we thought these collectible dolls looked more like wrinkled old men than babies. But enough kids were charmed for the adoptable toys—yes, they seriously came with adoption papers—to become the must-have kid accessory of the decade. They ended up on the cover of Newsweek in 1983, and by the end of that year, almost three million Cabbage Patch Kids had been "adopted." Hey, what can we say? They were cool then! Whether your shirt said "Choose Life" (as worn by the members of Wham in their videos) or "Frankie Says Relax" (some good advice from the band Frankie Goes to Hollywood), slogan tees were everywhere during the '80s, especially among hip kids in the know. And for more from last century's most bonkers decade, check out these 20 Photos Only Kids Who Grew up in the 1980s Will Understand.