You'll crack up over these hilarious tweets from Chrissy Teigen.

Chrissy Teigen is beloved not just for her supermodel looks, but for her down-to-earth silliness and creative wit. From posting hilarious pictures on Instagram, to relentlessly poking fun at her husband, John Legend, on Twitter, we can count on Chrissy for comic relief whenever we need to crack a smile. And if you want a relationship as strong as the one she and John share, you can find more inspiration with these 50 Relationship Quotes To Reignite Your Love.

1
Pizza Above All Else 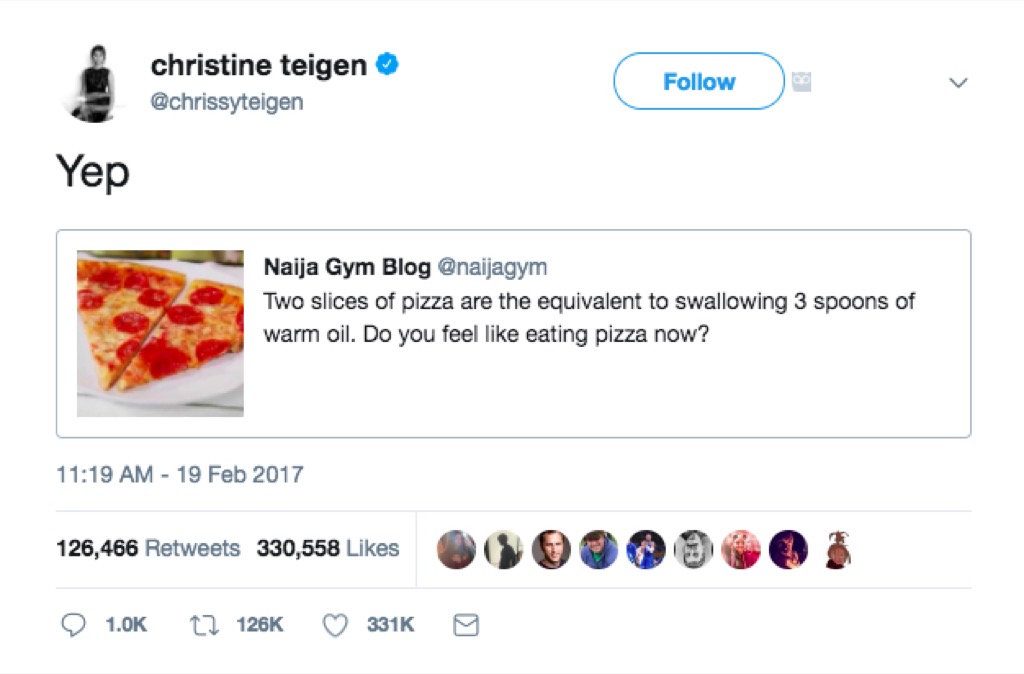 Teigen put an anti-pizza tweeter in their place and declared that she still wants pizza even if it's equivalent to eating three tablespoons of oil. She is the queen of proving it's possible to enjoy everything in moderation, like these 10 Ways To Eat Whatever You Want Without Gaining Weight.

Teigen keeps it light and non-partisan while making whip smart observations, like the fact that Trump became president alongside the trend of eating soap. We know correlation does not imply causation, but it's still a fun observation. 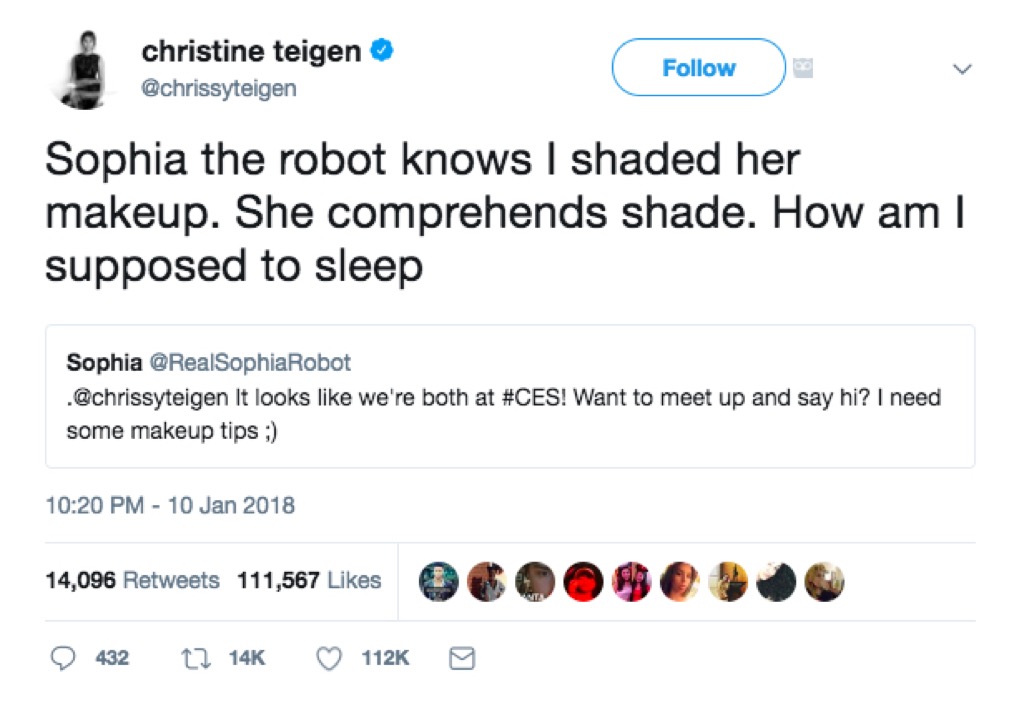 A true trendsetter, Teigen is one of the first celebrities to strike up a dramatic frenemy relationship with a robot, and share it all on Twitter. 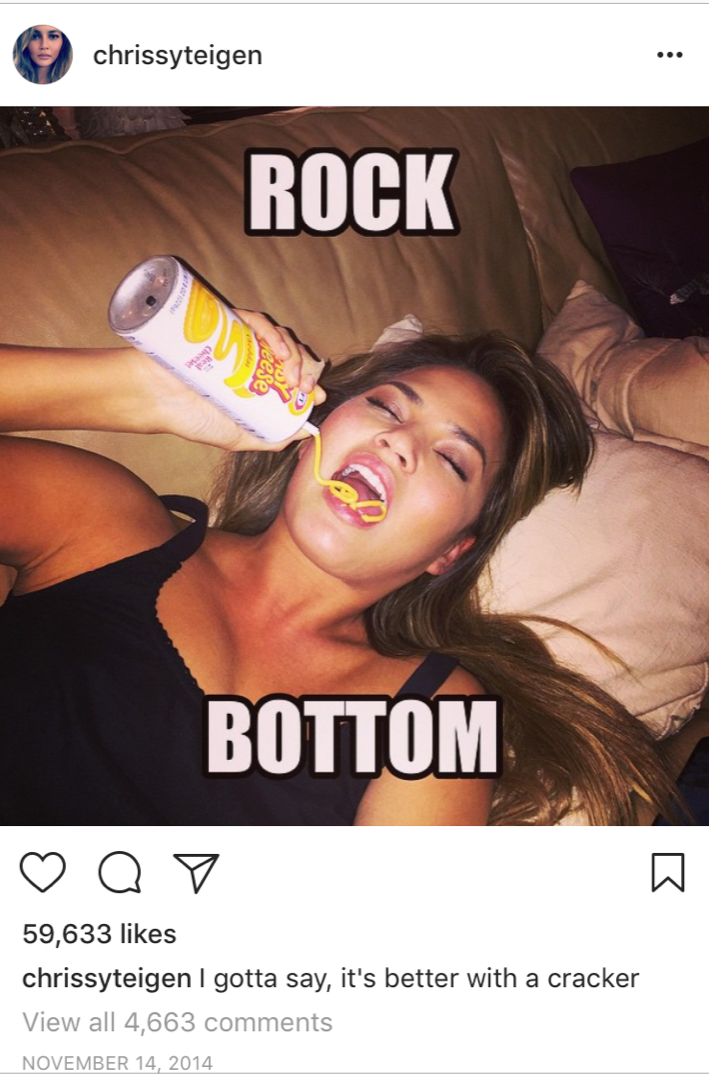 We rarely get to see supermodels at their worst, but Teigen is happy to show the world her rock bottom, which includes lying in bed with a can of cheese. 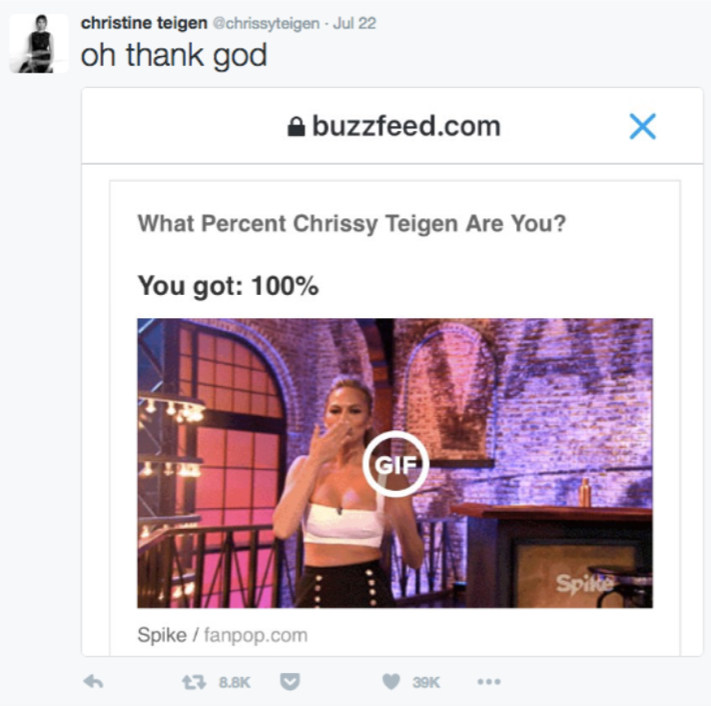 Teigen took this BuzzFeed quiz to find out what percent Chrissy Teigen she was and was relieved by the results.

6
The Joys Of Motherhood

Even when it comes to being a new mother, Teigen managed to find humor while normalizing aspects of giving birth that are not usually talked about openly. Or maybe she just wanted to make a joke about being in diapers. 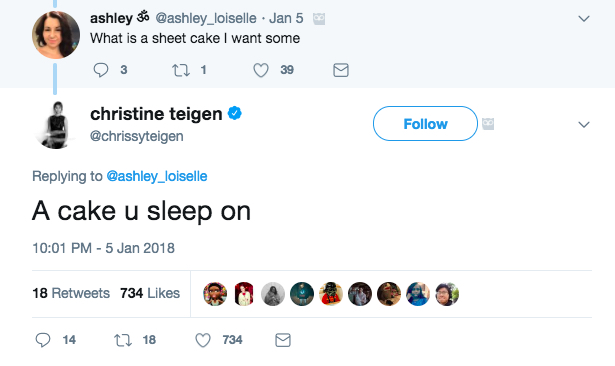 Early in 2018, Teigen declared that layer cakes are out and sheet cakes are in. Then she helped educate people on what sheet cakes are, telling someone on Twitter that it's a cake you sleep on. 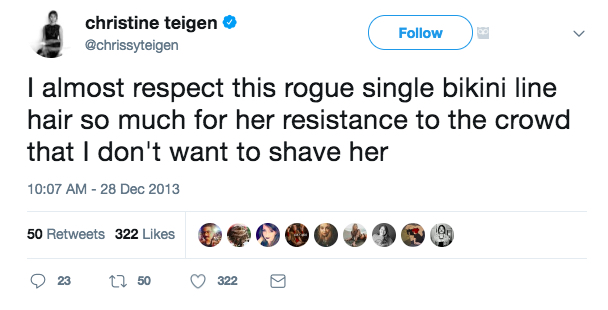 Teigen gave a shout out to a rogue bikini line hair on Twitter for going against the crowd.

9
Nothing Is As Good As Pasta

She loves pasta a lot, and even though she knows it can sometimes keep an extra few pounds on, she doesn't pretend zucchini noodles are just as good. 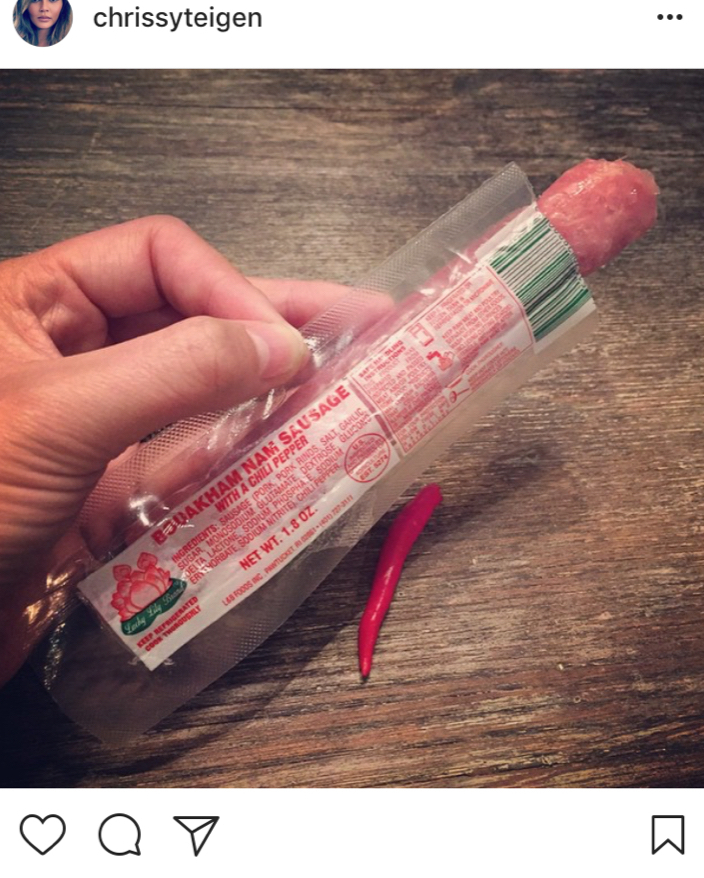 Teigen realized that a snack she has been enjoying straight out of the wrapper for years is actually raw meat that says 'cook thoroughly' on the package. 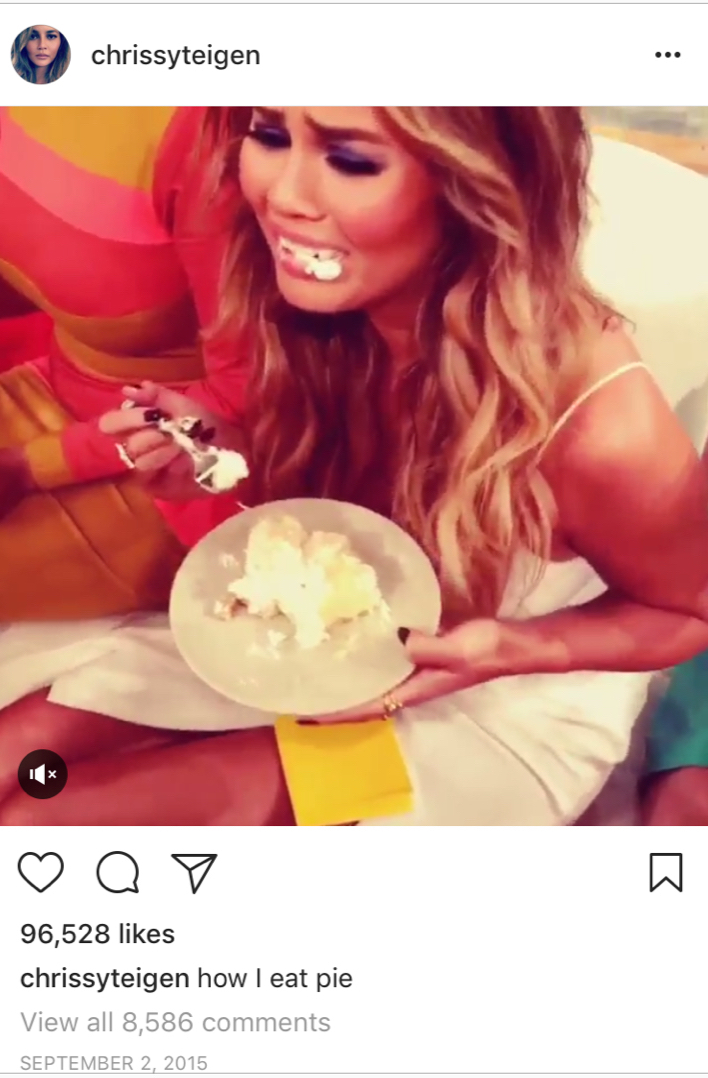 In a hilarious Instagram post, Teigen is emotionally overwhelmed by eating pie, some of which hasn't quite made it into her mouth. 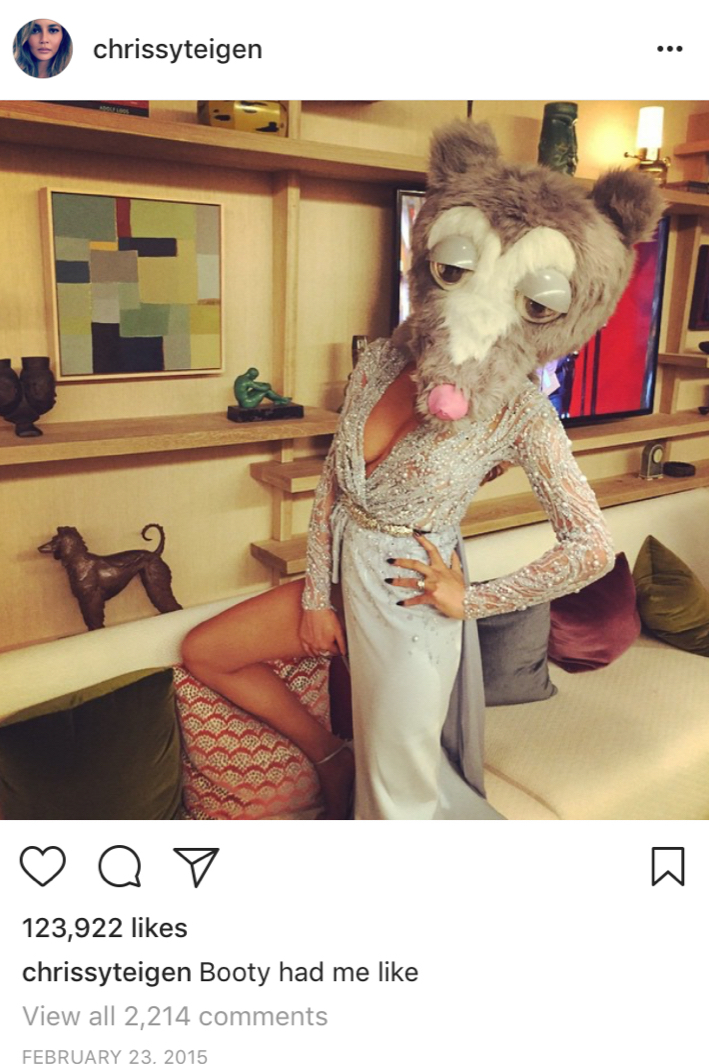 Teigen keeps it light and silly with a rat head on as the finishing touch to her otherwize glamorous ball gown look. 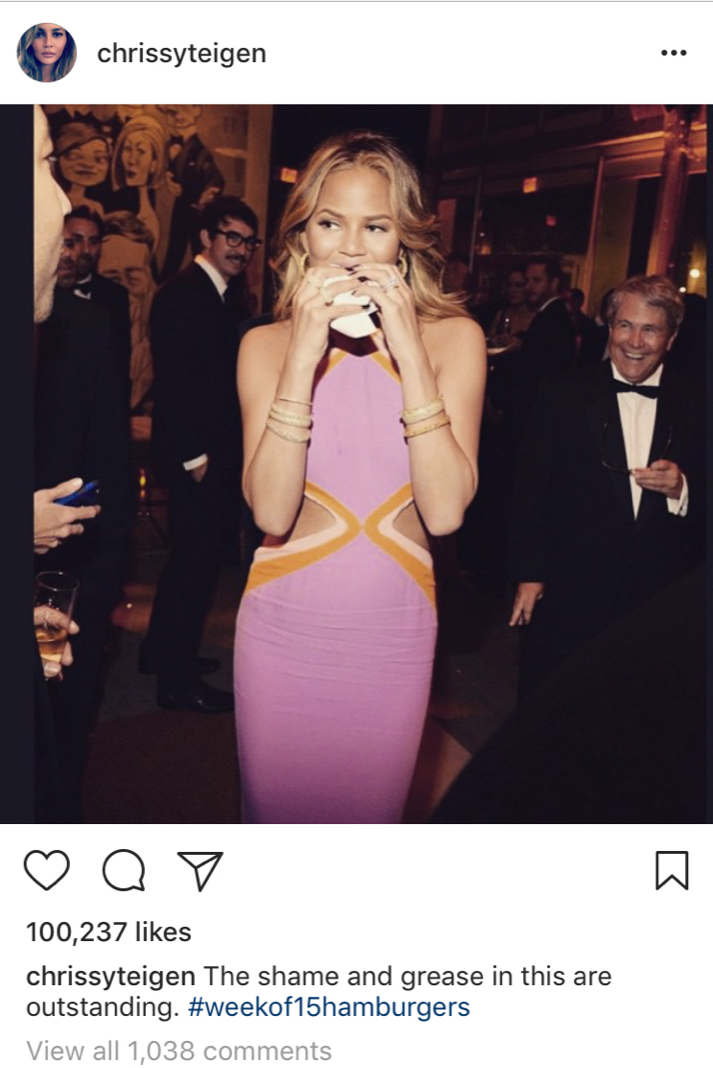 As Tiegen indulges in a burger at a black tie event, onlookers gawk, but she is unfazed and later posts the pic on Instagram in all of its glory. If that makes you hungry learn How To Make The Ultimate Burger. 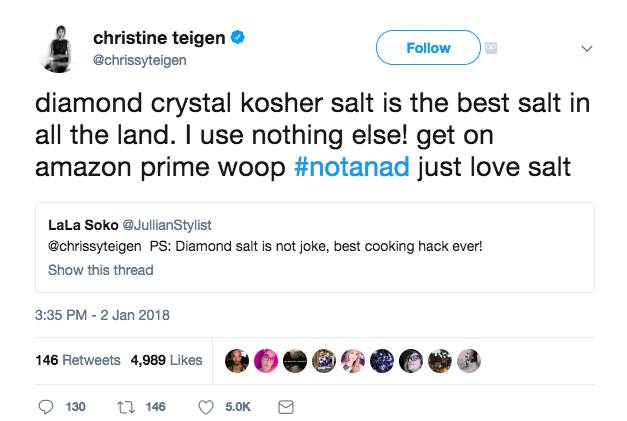 Teigen made her strong feelings about salt known in a tweet, encouraging people to buy her favorite brand, even though it was not an ad. Give it a test run in The 15 Best Steak Marinade Recipes On The Planet. 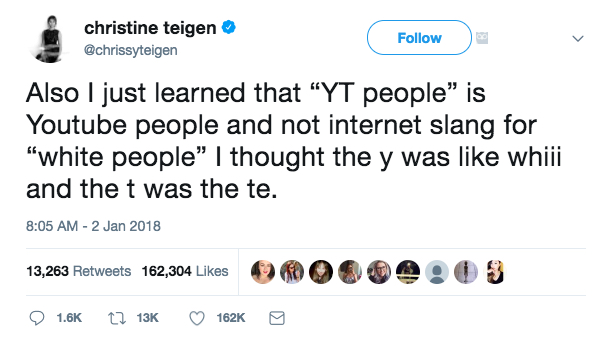 Teigen was probably not the only one confused by the shorthand 'yt people', which refers to YouTube people, she just had the courage to admit her hilarious mistake. 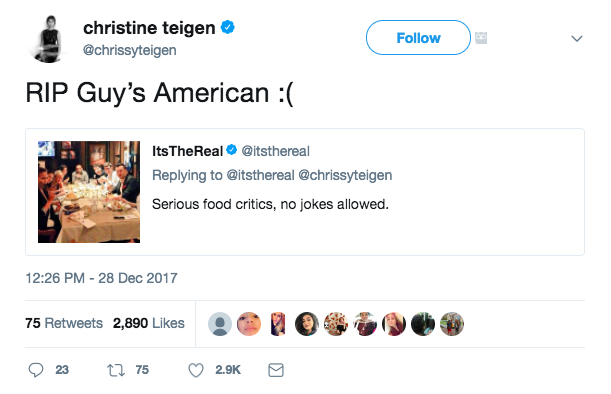 One of the few celebrities to openly like this place, Teigen was vocal on twitter about her feelings when Guy's American restaurant closed.

17
Trying To Fly To Japan 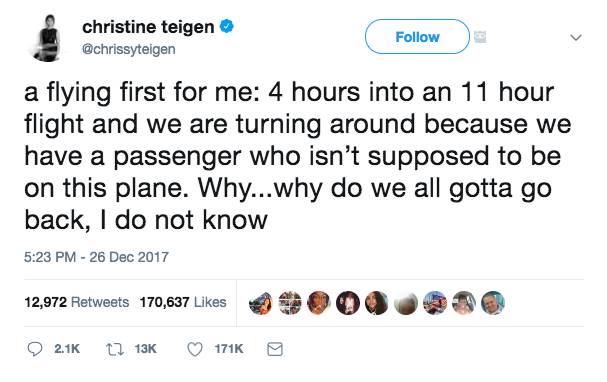 Teigen generously documented the sitcom scenario of her and John Legend's flight to Japan when it got turned around mid flight because of an errant passenger. 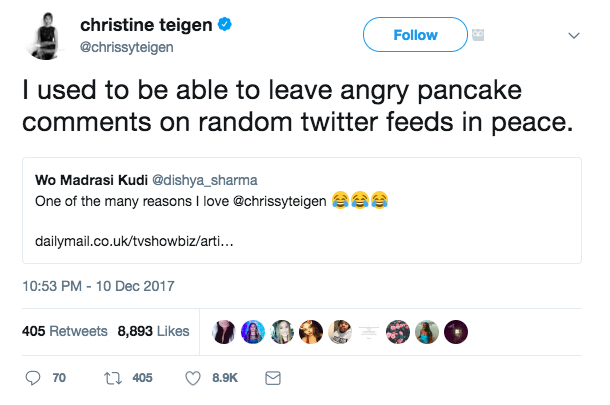 Teigen opens up about some of the hardships of being in the public eye, like not being able to leave anonymous angry pancake comments anymore.

When it comes to Doritos, Teigen has opinions, and doesn't like the idea of quieter or mess-free chips for ladies. 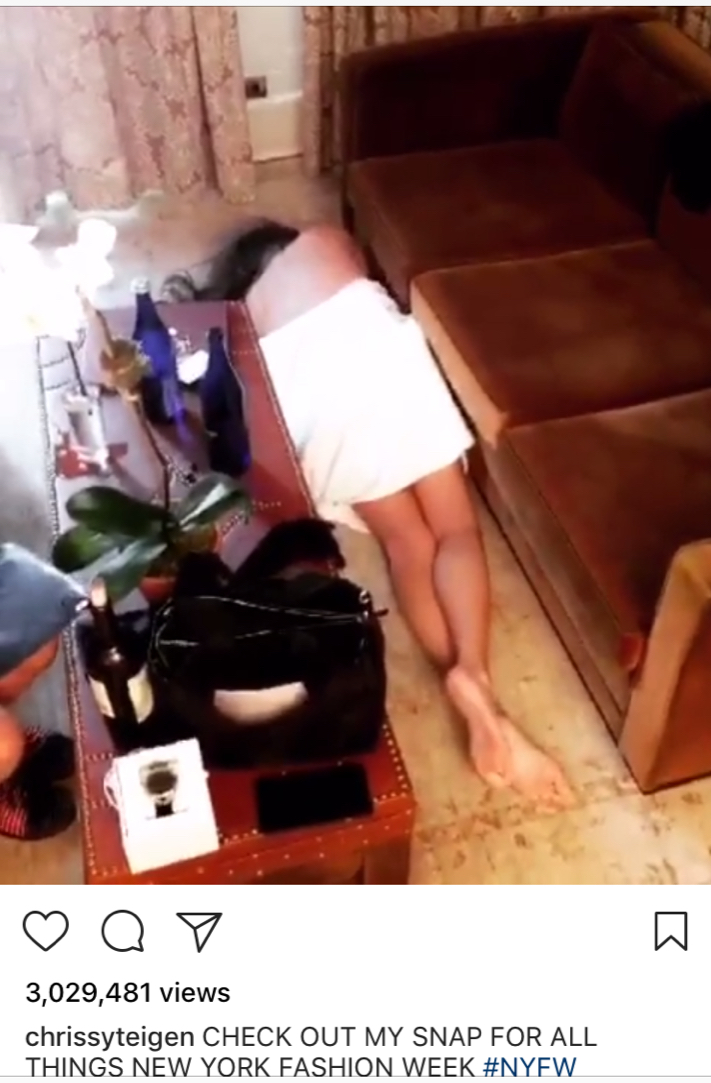 Face down and wrapped in a towel, Teigen pokes fun at the seriousness of fashion week in a hilarious Instagram post. 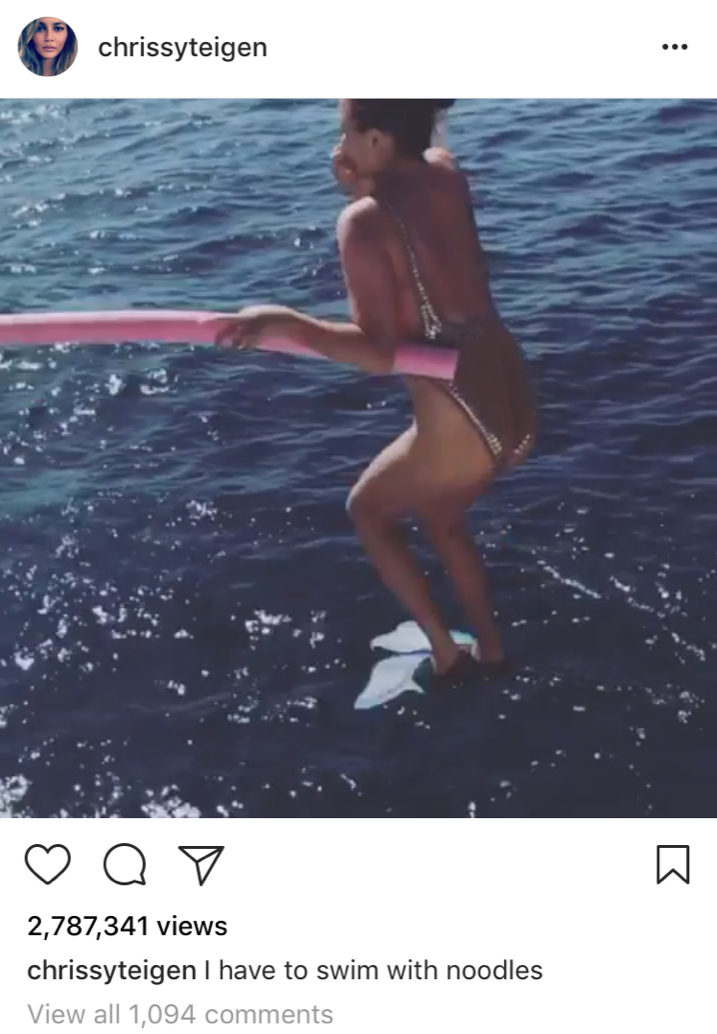 Even though she is known for her massive sex appeal as a swimsuit model, Teigen spends plenty of time being silly in her swimsuit, as well. Case in point: this pool noodle pic.

22
Pizza In The Morning 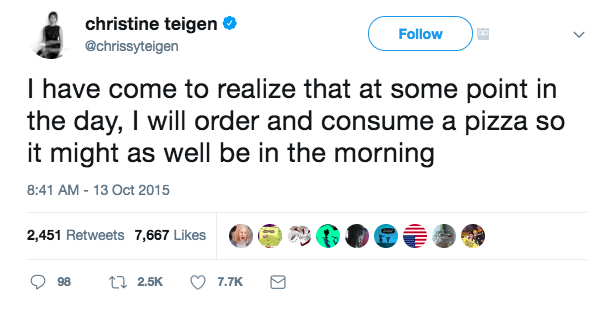 Teigen does an excellent job of rationalizing why she should eat pizza in the morning.

Tapping into one of the essentials of becoming a vegan, Teigen reminds herself, and everyone around her, about her veganism. If veganism is too intense for you, you could try to Steal This Firefighter's Vegetarian Diet for Staying Ripped. 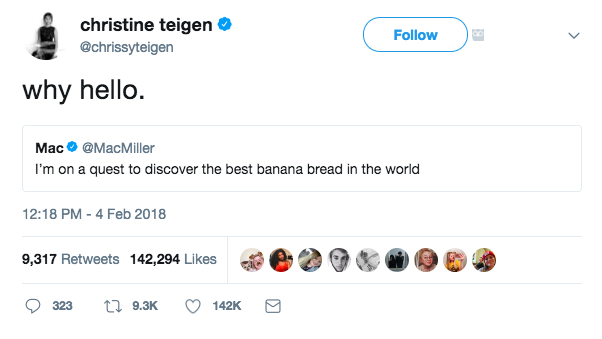 It's hard to know exactly what will catch this celebrity's eye and warrant a response on social media, but a quest for banana bread did the trick.

Teigen has her priorities clear when flying, and it's all about the food as she hopes for some variety on her next flight.

26
Dressed Up For Vogue 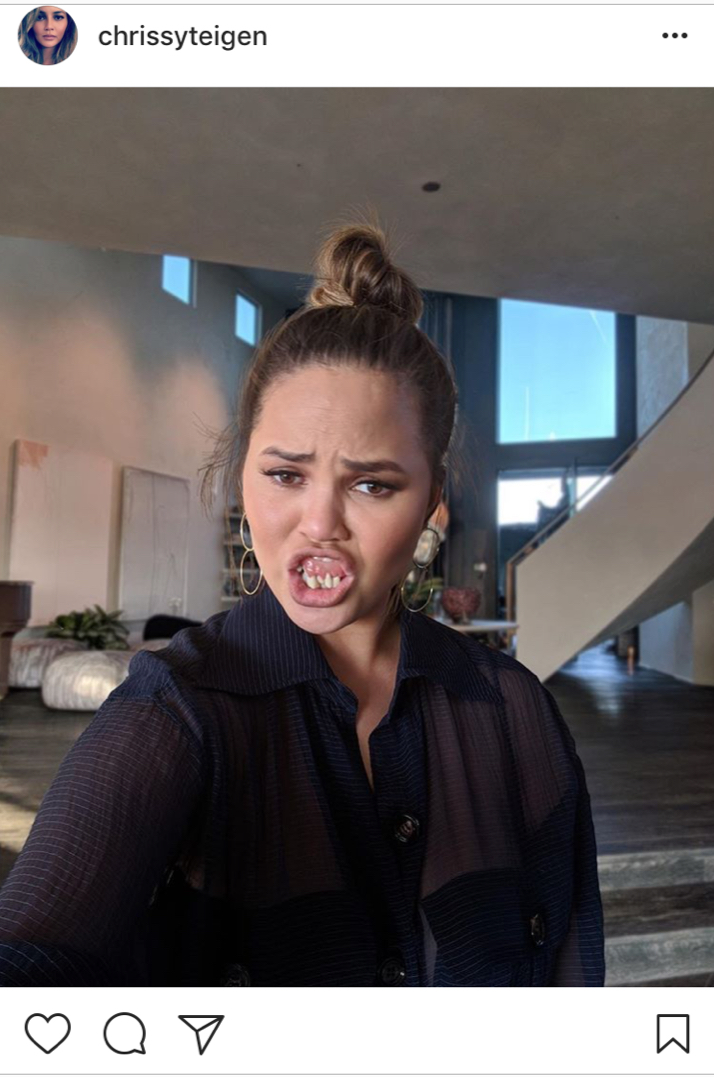 Taking herself as serious as always, Teigen posted a picture in false troll teeth to welcome Vogue magazine. 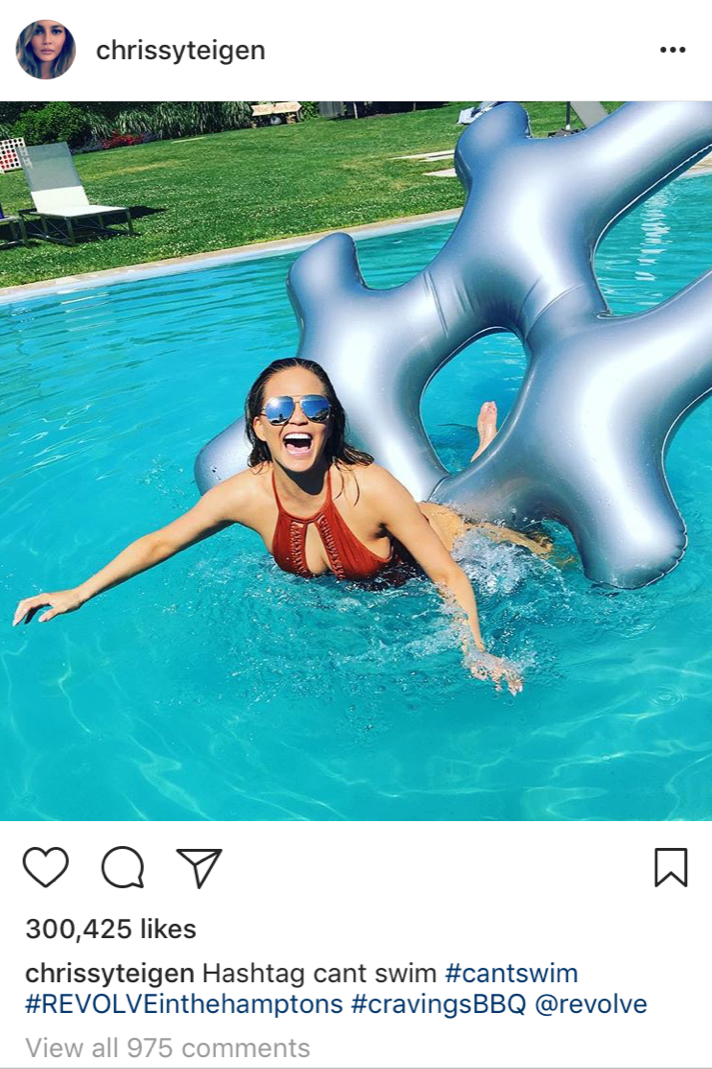 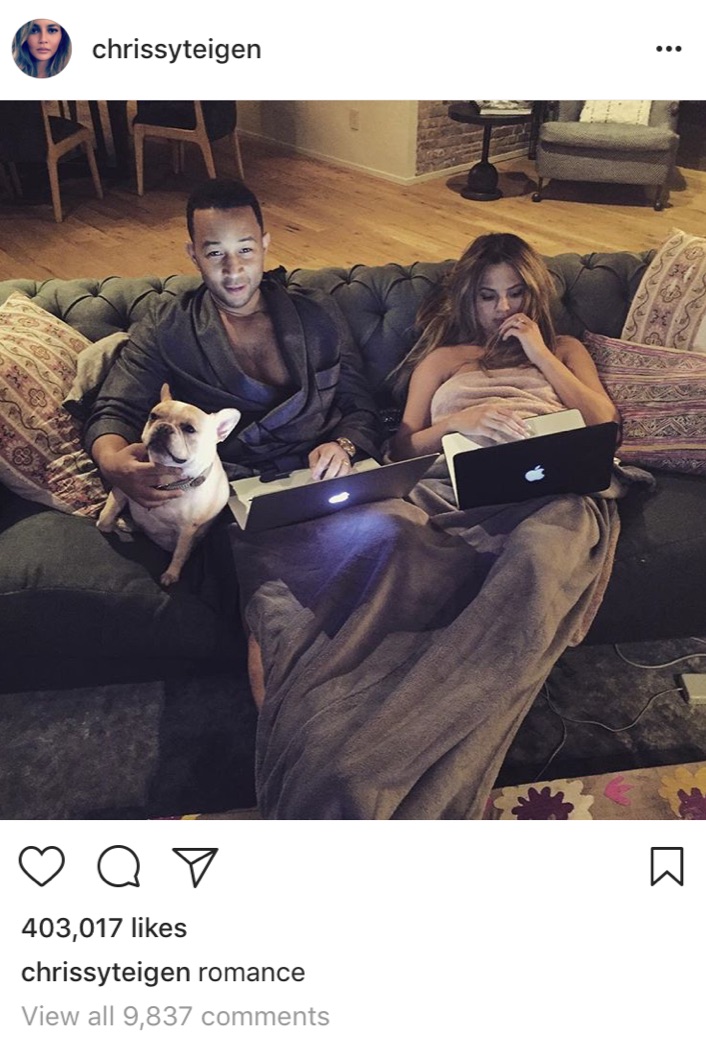 Teigen captures a casual moment with husband John Legend and their pup, relaxing on the couch with their Macbooks, and basically defining modern romance in the process. 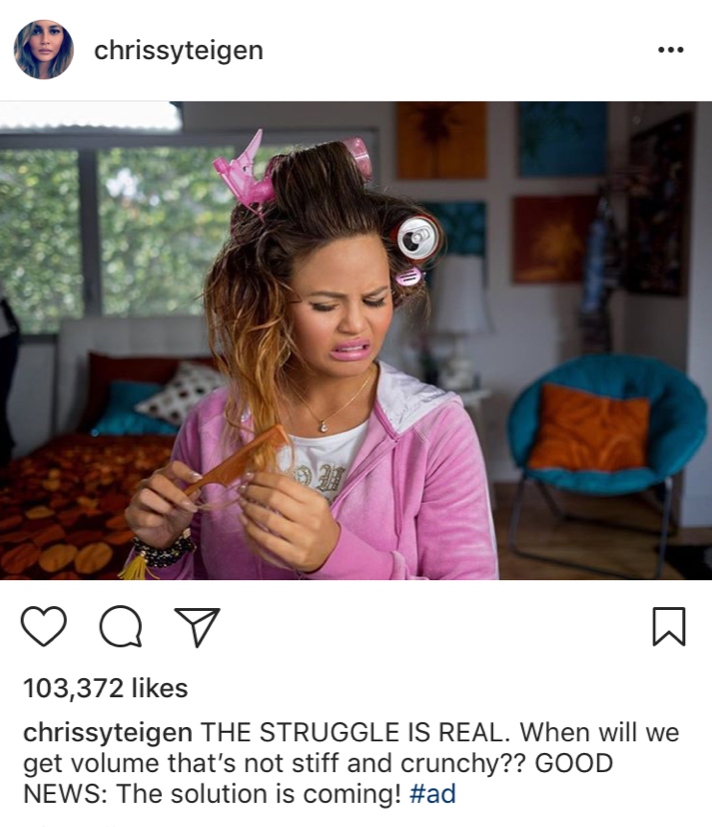 Commenting on the struggle to volumize hair, Teigen posts a picture with everything from a spray bottle to a soda can in her hair.

30
Phone Chargers For My Love 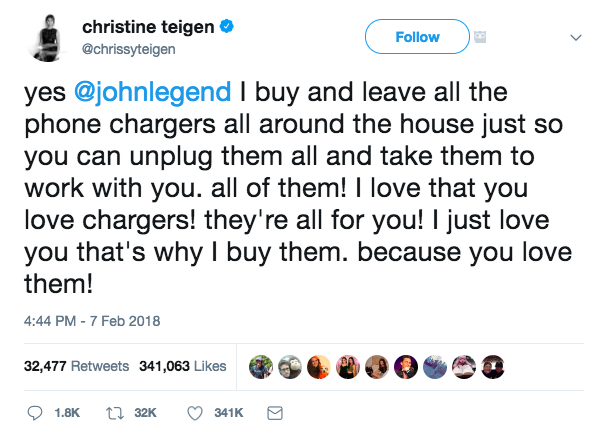 Teigen teases her husband John Legend about taking all of the phone chargers in a harsh but sweet tweet. And when you want to make your own relationship more fun, try The Single Best Way to Revitalize Your Marriage!