Celebrity Couples From the 2000s You Totally Forgot About

Let us go back to a time when Ryan Reynolds was engaged to Alanis Morissette, shall we?

It is nearly impossible to keep up with today's celebrity romances. While it's hard to forget current couples like John Legend and Chrissy Teigen and Orlando Bloom and Katy Perry, there are many celebrity romances that fizzled out and faded from our memories—even some from the last couple decades. For example, did you remember that Alanis Morissette was once engaged to Ryan Reynolds? Or that Lenny Kravitz wooed Nicole Kidman? Keep reading for some more former celebrity couples from the 2000s you probably forgot about! And if you can't get enough 2000s nostalgia, here are Celeb Red Carpet Photos From 2000 You Have to See to Believe.

It is hard to imagine Jay-Z with anyone other than Beyoncé—and yet, life before Queen Bey did exist. Rosario Dawson and Jay-Z were allegedly a low-key couple during the early 2000s. Not much is actually known about the pair, though: While some rumors suggest they dated for three years, others say it was a brief courtship. The two also never publicly admitted that they were a couple, though they did attend a few events together.

You probably don't recall that Ryan Gosling and Sandra Bullock were co-stars in 2002 thriller Murder By Numbers, or that they eventually started a romance after meeting on set. That's because the two tried to enjoy their relationship out of the spotlight. After all, Bullock is 16 years Gosling's senior, which turned a lot of heads at the time. And though they did not last, the pair seemed to be on pretty good terms for a while. In a 2011 interview with The Times, Gosling said he had two of the greatest girlfriends of all time: Bullock and Rachel McAdams. Now, of course, he's with Eva Mendes and the couple has two daughters together. And for more memorable Hollywood relationships of different generations, check out these 10 Celebrity Couples with Huge Age Differences.

The start of Lenny Kravitz and Nicole Kidman's romance was strange, to say the least. According to People, Kravitz was Kidman's landlord when they began dating around 2002. They were even engaged at one point, but because they were very careful to not live their private life in the limelight, the public found out about it only after the fact. The couple did seem to have a good relationship overall: Zoe Kravitz even told The Edit in 2017 that Kidman used to take her to see movies back in the day, long before they were co-stars on Big Little Lies. And for couples who did stand the test of time, check out these 20 Celeb Couples You Totally Forgot Are Still Together.

Before Fifty Shades of Grey star Jamie Dornan and Oscar nominee Keira Knightley were household names, the actors made one gorgeous couple. They met while modeling in an ad campaign for the British jewelry brand Asprey, and subsequently dated from 2003 to 2005. Knightley even helped set Dornan up for success by introducing him to her agent.

Edward Norton and Salma Hayek began dating after Norton broke up with Courtney Love in 1999. And though the two broke up in 2003, they remain good friends. Hayek recalled in a 2017 piece for The New York Times that Norton was among a "phalanx of angels" who helped with the screenplay and creation of Frida. And for more on amicable exes, check out these 17 Celebrity Exes Who Are Best Friends Now. 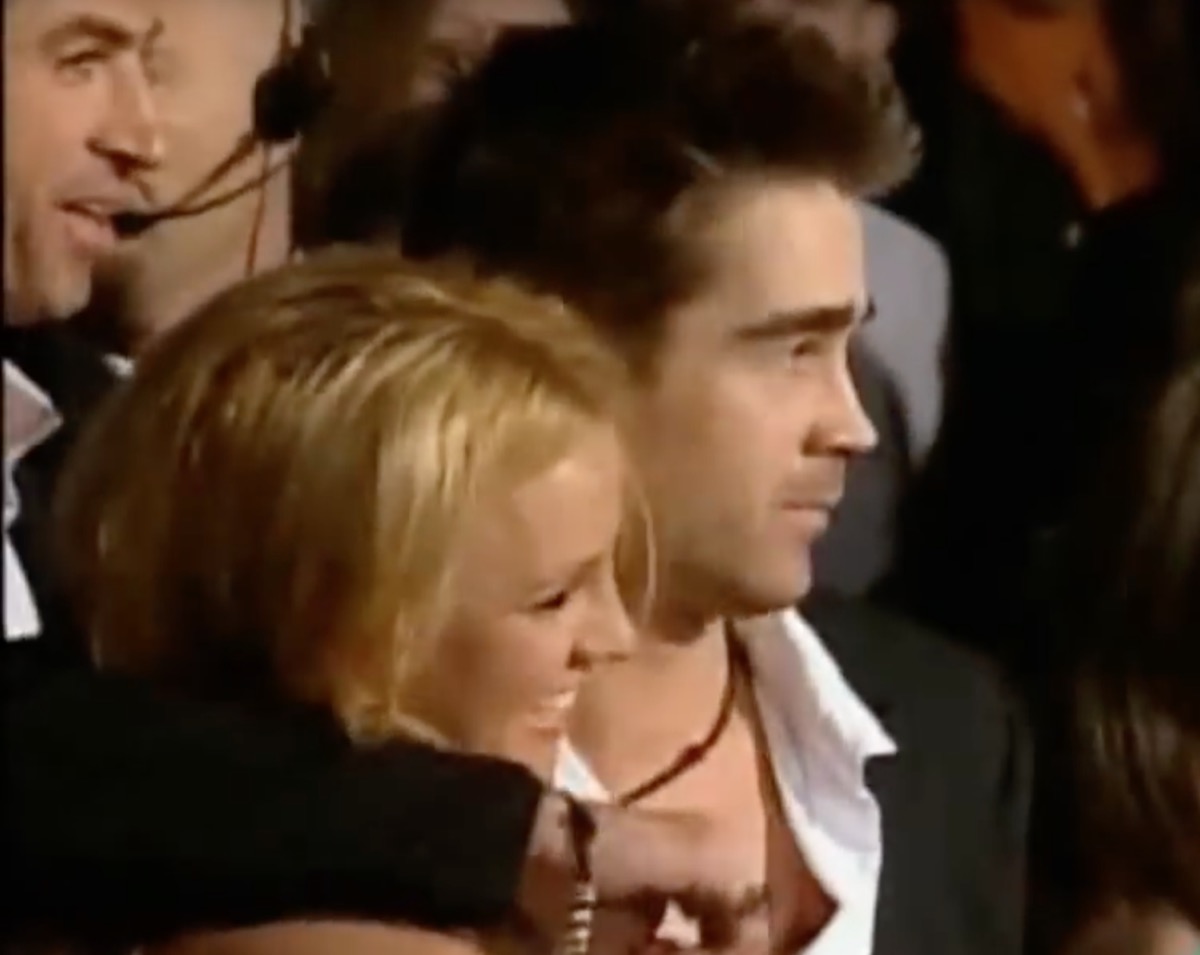 There is not a lot of information out there about Britney Spears and Colin Farrell's alleged 2000s romance. For all we know, it could've only lasted a night! When Spears attended the premiere of Farrell's film The Recruit in '03, the pair was spotted making out. However, Farrell ended up denying that he was linked to Spears romantically when he told People, "We're just mates, and we're not dating." However fleeting, it's fun to reminisce about this unexpected coupling.

John Mayer and Jessica Simpson briefly dated from 2006 to 2007. The couple made headlines when Mayer went a bit too far during a racy Playboy interview, noting that his relationship with Simpson was like "sexual napalm." Oof! Simpson later said on Oprah that she was upset about the comments, as she didn't want people knowing intimate details about her and her relationships.

Bradley Cooper and Renée Zellweger met in 2006 on the set of Case 39. And while the movie might not have been a success, it did result in this headline-making romance. The couple purposely tried to spend time away from cameras during their low-key relationship from 2009 to 2011. But it didn't last—Zellweger went on to date musician Doyle Bramhall II for seven years, and Cooper has been linked to everyone from Zoe Saldana to Irina Shayk, with whom he has a child.

Nowadays, you probably can't imagine Jennifer Lopez with anyone other than her current fiancé, New York Yankees baseball player Alex Rodriguez. However, at the start of the 2000s, Lopez and rapper P. Diddy were a hugely famous item. The couple began dating in 1999, following Lopez's divorce from her first husband, Ojani Noa. The pair was practically inseparable when they were dating. But after they got arrested in December 1999 when an argument P. Diddy was having in a New York dance club turned into a shootout, the relationship was on shaky ground. They finally announced their split in 2001.

Supermodel Gisele Bündchen and Titanic star Leonardo DiCaprio were a gorgeous couple for five years—from 2000 up until their breakup in 2005. In an interview with Porter, Bündchen revealed in 2019 that the reason for that breakup was her mental health. She said that while she was making changes in her life to accommodate her anxiety, DiCaprio was staying "the same"—thus leading her to break things off. Ever since, he's continued playing the field and she's been with NFL star Tom Brady, with whom she has two children. 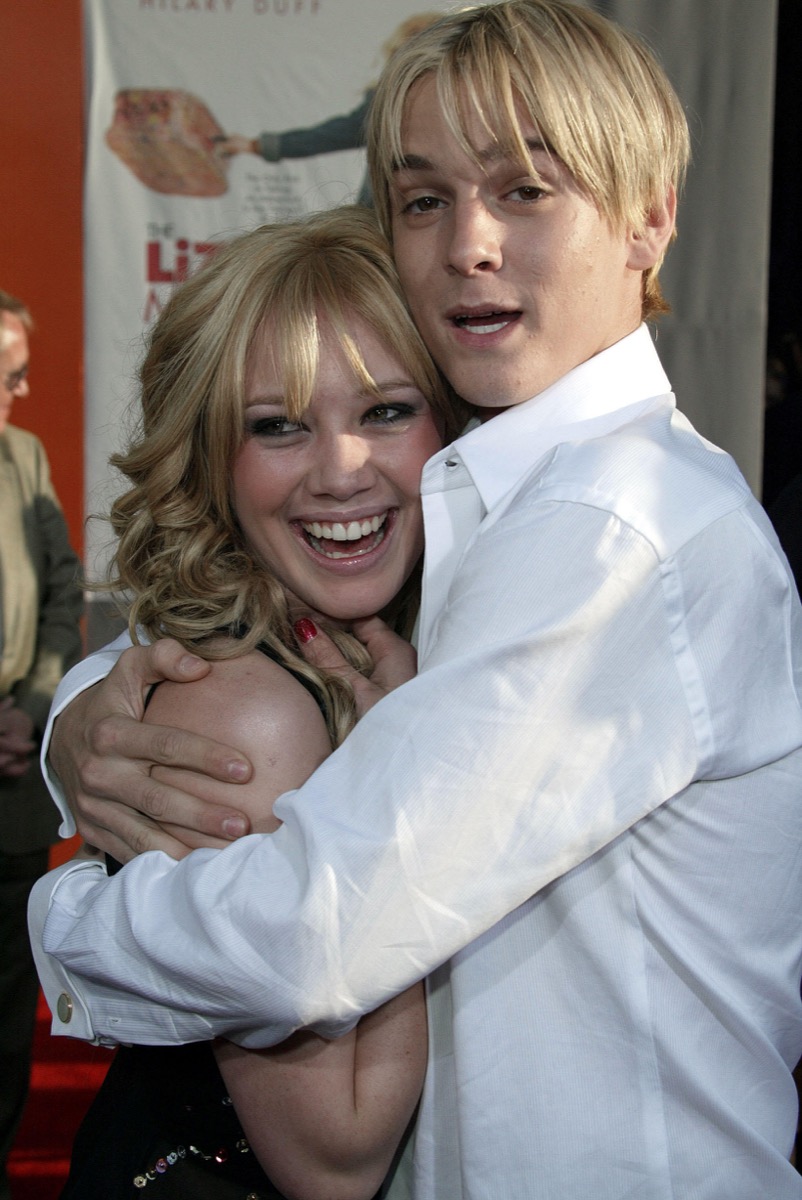 Teenage romances usually come with a lot of drama—and this particular young couple was no exception. Aaron Carter and Hillary Duff started dating in 2000 when they were both just 13 years old. The couple dated on and off for three years—but in 2003, when rumors that Carter cheated on Duff with Lindsay Lohan emerged, the couple officially ended things.

But even a decade later, Carter still seemed to be harboring feelings for Duff. In March 2014, he proclaimed his love for her in two tweets (both of which have since been deleted). And speaking of teenage celebs, check out these 25 Child Actors When They Got Their Start Vs. Now.

This adorable couple was the result of Jake Gyllenhaal's sister, Maggie Gyllenhaal's, matchmaking efforts. (Maggie co-starred with Kirsten Dunst in 2003's Mona Lisa Smile.) Soon after they met, the couple started dating, and they embarked on a very fast-moving relationship. All within the span of two years—from 2002 to 2004—they dated, lived together, and even co-parented a dog. Though Kake (Jirsten? Junst?) didn't last, we will always remember this relationship for the infamous salad photo it gave us.

Carson Daly and Tara Reid met on the set of MTV's spring break special in Cancun and became an item soon after. Things seemed to be going really well—so much so that in October 2000, Daly proposed to Reid. Things didn't last, though: After pushing their wedding back to accommodate Reid's work schedule (she was filming My Boss's Daughter at the time), the relationship ended in 2001.ae0fcc31ae342fd3a1346ebb1f342fcb

"When something's not right, it's not right," Reid told the New York Daily News at the time about the breakup. "I did everything I could to make the relationship work, and it didn't."

Ashton Kutcher and January Jones were a couple from 1998 to 2001. However, according to Jones, Kutcher was far from a good partner. "[He] was not supportive of my acting," Jones told GQ in 2009. "He was like, 'I don't think you're going to be good at this.'" Hopefully, he realizes how wrong he was in retrospect about the Mad Men star.

Brittany Murphy and Kutcher met on the set of Just Married in 2003 and began dating. However, almost immediately after filming wrapped, the couple also ended their relationship after just a few months. It turns out that they didn't possess the same romantic chemistry their characters did.

Once upon a time, Drew Barrymore was briefly married to outrageous MTV star Tom Green. The two tied the knot in 2001, and divorced after just nine months. "It was just a very short period of time that I had a brief marriage," Green said on Oprah: Where Are They Now?, as noted by HuffPost. "I don't really tend to talk about it that much comfortably [or] publicly. All of that was part of that sort of crazy, whirlwind of a time."

Ryan Reynolds and Alanis Morissette reportedly met at Drew Barrymore's birthday party in 2002 and started dating shortly after. In 2004, the couple announced they were engaged, but after a nearly three-year engagement, they announced their separation in 2007. Morissette ended up writing the single "Torch" about the breakup.

Kate Hudson and Lance Armstrong began seeing each other in May 2008 while they were both on vacation in the Bahamas. However, don't feel bad if you don't remember this former celebrity couple: The relationship lasted just three months. When they split in August of '08, an associate at Armstrong's LiveStrong foundation told reporters that Hudson was "just too needy" for the cyclist. Eek!

Before there was Kate Hudson, there was Sheryl Crow. Yes, from 2003 to 2006, Armstrong dated the "Soak Up the Sun" singer. They were even engaged at one point! After their breakup, Crow adopted two boys in 2007 and Armstrong began dating designer Tory Burch.

And before she was engaged to Lance Armstrong, Sheryl Crow was with Owen Wilson from 1999 to 2001. As E! reports, they even attended the exclusive Vanity Fair Oscar party together in 2000. All we really have left to remember this relationship by is "Safe and Sound," Crow's 2002 single written about Wilson.