17 Subtle Signs Your Marriage Has Become Toxic, According to Experts

Here's how you can tell if things have turned toxic between you and your spouse.

It's no secret that getting married is a huge decision and a major commitment. It's something that you and your partner enter into with the shared goal of making it a happy, healthy, long-standing union. However, a marriage is like anything else in life—it doesn't always work out the way you want it to. And if things do start to go south, it can be easy to ignore the signs of a toxic marriage because of how badly you want your relationship to last.

"When warning signs first appear, we may try to rationalize them as normal—after all, no relationship is perfect. And it is very hard to admit to something as important as one's marriage showing signs of trouble," says Inna Khazan, PhD, a Harvard-educated clinical psychologist. "And while it is absolutely true that no relationship is perfect, it is important to distinguish between imperfections we are willing to live with and those we are not. Once problems we are not willing to live with start to snowball, it may become particularly difficult to address them."

If you're concerned that your relationship might be in trouble, it's time to pay attention to the red flags that could be right in front of you. These are the subtle signs that indicate you and your partner may in fact be in a toxic marriage.

1
You constantly flaunt how great your relationship is on social media.

While it may sound counterintuitive, if you're constantly gushing about your marriage online, you may be trying to subconsciously overcompensate for a toxic marriage. A 2014 study published in the journal Personality and Social Psychology Bulletin revealed that people who are insecure or unhappy in their relationships were more likely to post about them on social media.

2
Your entire lives revolve around one another.

Many people think their whole world should revolve around their marriage, but if that's the case, you could be in a toxic one. "The social prescription is always more 'togetherness,' but you need the space to be an individual in a relationship," says Jim Fleckenstein, author of Love That Works. "These kinds of relationships can slide into excessive jealousy, possessiveness, and control struggles. They can then become abusive in short order."ae0fcc31ae342fd3a1346ebb1f342fcb

3
You spend more individual time with your children than you do as a couple.

If you have children with your spouse, how much time you spend with your kids solo versus together can be a helpful indicator as to whether or not you're in a healthy marriage.

While there's certainly no issue with parents spending individual time with their children, if you're doing so more often than you're spending time with them as a couple, it may be a sign there's trouble, says writer and psychoanalyst Tapo Chimbganda, PhD. She says those in a healthy marriage tend to involve the entire family in activities—including their spouse—rather than separate their time with their kids.

4
You're pursuing friendships that your spouse doesn't know about.

Of course, having your own individual life outside of your relationship is an important part of maintaining a healthy marriage. And while there's absolutely no harm in each of you having your own circle of friends, if you or your spouse are consistently pursuing new friendships that the other is unaware of, that's when it becomes a sign of a potentially serious marriage problem.

Chimbganda says if one spouse is seeking out new friendships where "they can tell their side of the story," it's because they know that people "who know both parties or the history of the relationship may advocate [for the other]." So they seek these new friendships or connections to use as a sort of "haven" from the marriage. And in doing so, they open things up to the possibility of the friendship becoming something more intimate, whether they are aware of that or not.

5
Your friends express serious misgivings about your marriage.

You've likely heard that you shouldn't listen to what other people have to say about your relationship, and that's good advice in some circumstances. But when it's coming from people you trust and that you know have your best interest at heart, it's probably worth hearing them out.

"You might ignore signs of unhealthy behavior because you want to give your partner a chance, think you can change him or her, feel that you have unhealthy behaviors so you shouldn't judge someone else, or believe you don't deserve someone healthier," says author and licensed psychotherapist Karen R. Koenig, MEd. And while nobody is perfect, if you find that people who care about you are regularly sharing concerns about your marriage, it's time consider the harsh reality that there may indeed be a real problem.

It really is true what they say: Good communication is essential to any healthy relationship. So if your partner is always sidelining your attempts to have a dialogue, don't brush off such telling behavior. Maria Sullivan, vice president of Dating.com, says that another sign of a toxic marriage is when your spouse is attempting to multitask whenever you try to have a serious conversation with them. It could indicate that they genuinely don't care about what you have to say.

7
Your partner is too demanding of your attention.

And what's just as toxic as being not attentive and present enough? Being overly demanding of one another's time, attention, and energy. According to Sullivan, your partner should know when to give you space and not push you or become overbearing. There is a time and place to be assertive, but there is also a time and place to take a couple steps back.

8
You don't alert one another about decisions, big or small.

If you've noticed that your partner has slowly stopped taking your feelings and thoughts into account when making decisions, don't write it off as innocuous. Kevin Darné, author of How to Date Online Successfully, says when your spouse starts feeling as if they don't need to "make a courtesy call or text" to inform you of changed plans, even if you don't ask that they do, it may mean they have started to take you for granted. And this brings forth a toxic "me" mentality instead of an "us" mentality when it comes to your marriage.

9
You always feel on the defensive. 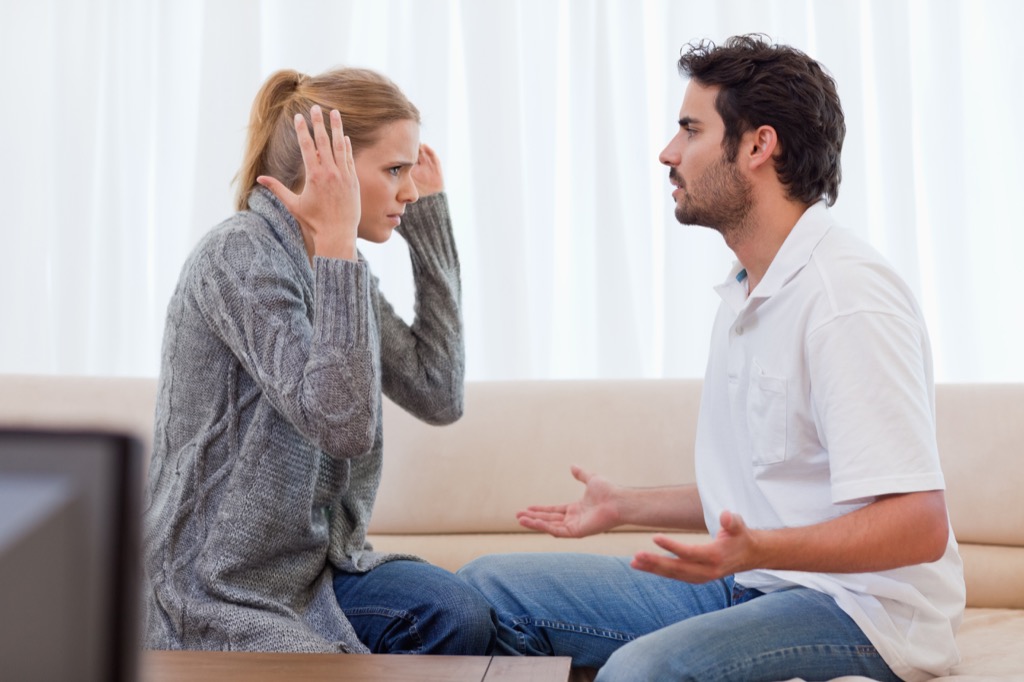 Do you always feel like you're on guard when it comes to your marriage? According to Brandon Santan, a licensed relationship therapist in Tennessee, this nonstop defensive state is a reaction to being overly criticized by your partner. And when a marriage becomes toxic, the criticism you are naturally defending yourself against may be passive-aggressive, so it's even more frustrating because it's harder to identify exactly why you've become so defensive.

10
You feel exhausted all the time and don't know why.

An unhealthy marriage can be downright exhausting, which is why Santan suggests taking inventory on your relationship if you find yourself consistently burnt out, whether it's physically, emotionally, mentally, or all three.

11
You can't relax or be yourself around your spouse.

Your marriage should be a place of comfort. If you constantly feel on edge and unable to relax around your spouse, that may mean there's an underlying issue. "It's impossible to be truly happy in any relationship if you cannot be your authentic self," says Darné. "If you feel like you're walking on eggshells, jumping through hoops, or find you're constantly second-guessing yourself, you're in a toxic relationship."

12
You have become the scapegoat for your partner's problems.

Arguments are common in any marriage. But if your partner has a way of turning everything back around on you, it may be time to get out. According to April Davis, founder of Luxury Matchmaking, you may not even realize that your spouse has made you their scapegoat, projecting any negative thing that happens onto you. Receiving constant blame or backlash for everything that goes wrong in their lives, no matter what level of involvement you actually had, is a telltale sign of toxicity.

13
You keep little secrets from each other.

It's completely normal to want to keep a few things to yourself, but if it gets to the point where the secrets you keep from your partner are starting to add up, whether they are serious or not, you need to ask yourself why that's the case, says Khazan. If your secrecy is borne out of a desire to avoid your partner's potential overreaction to what would generally be considered acceptable behavior, like occasionally buying yourself something small or hanging out with a friend, then there is definitely cause for concern.

14
You don't go to your partner for emotional support.

When you're in a healthy marriage, your spouse is typically the person you turn to in times of trouble. But if you're eager to confide in virtually anyone other than your partner, you're likely trying to find a connection that has been lacking in your marriage—or was never there to begin with. "There are some signs that in and of themselves indicate that the relationship is not healthy," Khazan explains. "These include not feeling safe physically or emotionally in the relationship."

15
Your partner isn't being forthright about finances.

Another indicator that your marriage might be turning toxic is in how you each handle financial matters. According to Russell Knight, a divorce lawyer in Chicago, when someone in a marriage has financial accounts or spending habits that they keep from their spouse, it is a major red flag that your marriage is in trouble. Not only that, but this kind of furtive behavior may also be indicative of other serious problems your spouse may have with things like "drugs, gambling, or sex addiction," Knight says.

16
Your sense of self-worth has diminished.

There's no harm in a playful teasing here or there or some constructive criticism, but that doesn't mean your partner should constantly be putting you down. Amy Hartle of the travel and relationship blog Two Drifters says that if this "criticism" or "negging" gradually makes your own self-worth decrease, you're in a toxic marriage. "Marriage should be built on being your spouse's biggest supporter. Will there be fights and harsh words spoken? Sure, but [they] should always result in unity," Hartle says. "Even when harsh words are said, these should not be words that chip away at your self-worth. Healthy conflict should always have a focus of being on the same team and working to strengthen and heal your relationship."

Santan says that when your marriage starts to become toxic, "you may find yourself avoiding home, staying longer at work, or finding excuses to leave the house for a while." Instead of confronting your uncomfortable feelings towards your spouse, you're subconsciously attempting to separate yourself from the negative energy of your toxic marriage as much as possible.