17 Signs Your Bad Dreams Could Mean Something Worse

We've all had our share of nightmares. Hey, they're just a natural part of life! But sometimes a nightmare is actually more than just a nightmare. If you're experiencing them frequently or severely (or frequently and severely), there could be something bigger at play. Here are 17 signs your bad dreams could indicate something much, much more serious than a series of random mental images.

Frequent nightmares are a possible symptom of panic disorder, schizophrenia, dissociative disorder, and borderline personality disorder. But nightmares are most commonly associated with the big bugaboos of mental health: clinical depression and clinical anxiety. Among adults with clinical depression, 11.4 percent reported having nightmares, while, among those with clinical anxiety, that number jumps to a whopping 17.1 percent.

While bad dreams can arise from countless factors, scientists have doubled down on how they relate to post-traumatic stress disorder. And their findings have been astonishing: one study out the University of Pittsburgh School of Medicine revealed that 90 percent (!) of people who experienced PTSD had reoccurring nightmares.

Nowadays, nightmares are one of the symptoms used to diagnose PTSD. And, yes, many people have nightmares associated with their trauma—but that's not always the case. According to one study published in Behavioral Sleep Medicine, 60 percent of PTSD victims reported suffering from nightmares prior to their trauma, suggesting that having nightmares could make someone prone to the condition.

Have you checked the warning labels on some of your medication bottles? It's very common for many medications to list nightmares as a possible side-effect. A good rule of thumb: any medication that influences the neurotransmitters in the brain—like antidepressants or mood stabilizers—has the ability to negatively affect your dreams. But blood pressure meds, sleep aids, allergy meds, and steroids can cause them, too. Read your labels, folks.

In a study of university undergraduates, researchers at the Canadian Center for Advanced Research in Sleep Medicine found that 17.8 percent of students believed that food caused their dreams to be more bizarre or disturbing. And get this: those undergrads are on to something.

According to the National Sleep Foundation, when you eat before bed, your metabolism is boosted, signaling your brain to be more active. And since the dreaming stage of sleep happens while your brain is at its most active, if you're dreaming more, you also may be experiencing more bad dreams during that time. In other words: Stop eating right before you hit the hay.ae0fcc31ae342fd3a1346ebb1f342fcb

5
You're Not Getting Enough Sleep

It's a vicious cycle. Nightmares can cause you sleep less, but sleeping less can also cause nightmares. The American Academy of Sleep Medicine found that 17.1 percent of those with frequent insomnia reported having frequent nightmares as well when able to sleep. When you're not getting adequate REM sleep every night, your brain ends up becoming overactive during the few moments you do experience REM sleep, heightening the amount of bad dreams you have.

Loss of sleep might not be the only thing increasing your bad dreams, however. If you are getting enough sleep, but experiencing breathing complications such as sleep apnea, you may still have increased nightmares.

A study of sleep apnea patients, published in the Sleep Medicine Journal, revealed that the patients also suffering from nightmares had a higher severity of sleep apnea during the REM cycle: 91 percent of those patients who agreed to undergo treatment therapy for sleep apnea reported experiencing less nightmares.

7
You May Have General Sleep-Related Problems

While sleep apnea is one of the most common sleep issues, your nightmares could be pointing to any number of problems, like sleep paralysis, restless leg syndrome, or even narcolepsy.

You also might be experiencing an actual nightmare disorder. (Don't worry: the condition sounds more terrifying than it is.) Symptoms of a nightmare disorder include repeated awakening from intense, threatening dreams, alertness upon awakening, and frequent nightmares not associated with any other issue. Nightmare disorder is most common in children below the age of 10, but about 4 percent of adults still suffer from the disorder.

8
You're Not Cut Out for Scary Movies

If you're a fan of horror flicks, sorry, but you should refrain from having any marathons after dark. A study conducted by the International Association for the Study of Dreams concluded that media has an outside influence on dreams—and that those who watched violent movies before bed were more likely to experience violent dreams.

9
You Have Undiscovered Lactose Intolerance

While you should already avoid snacking before bed, if you can't help it, at the very least reconsider what you snack on: namely, dairy. One Canadian Center for Advanced Research in Sleep Medicine study found that participants mentioned dairy most often in association with disturbing dreams. Lactose intolerance is one of the most common food allergies—one that often goes undiagnosed—with 65 percent of the population having a reduced ability to digest lactose after infancy. So, if you suffer from nightmares, cut out the cheese plates and ice cream.

10
You May Be Developing a Fever 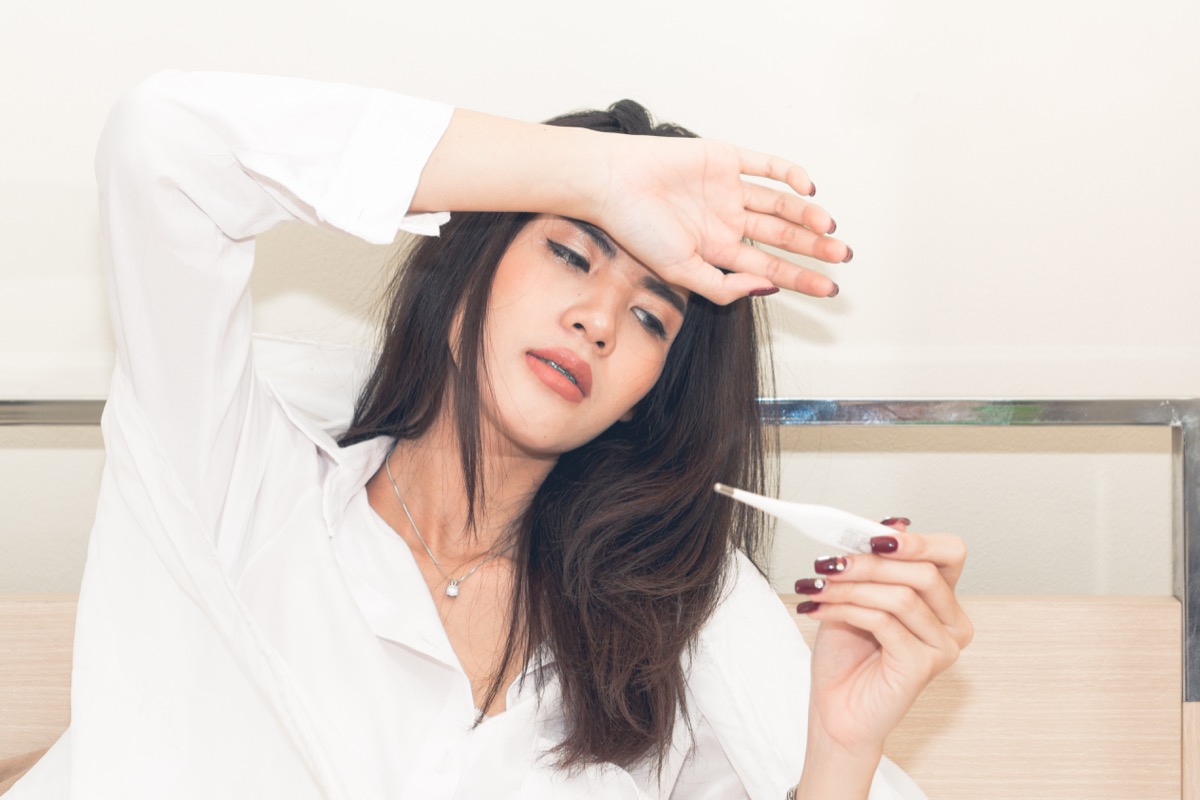 A sharp rise in body temperature could be the answer behind your sudden nightmares. The amygdala inside your brain—most associated with negative emotions like terror and anger—can be thrown for a loop when your body is overheating. This over-activation of the amygdala, which is already quite active during REM sleep, can cause an increase in intense fear-responses while you're dreaming. Hey, look: An excuse to call out sick tomorrow!

11
You're On the Brink of a Major Life Change

Most major shifts in life bring come with their fair share of stress and anxiety, no matter if it's a good change or a bad one. An Oxford Sleep and Circadian Neuroscience Institute study—and this surely won't surprise you a bit, but it's always good to have scientific confirmation—found that higher levels of worry and stress correlated with an increase in nightmares. Out of all the factors studied—including worry, psychotic behavior, alcohol use, and depersonalization—worry was the strongest factor associated with nightmare occurrence.

12
You Could Be Overindulging Certain Vices 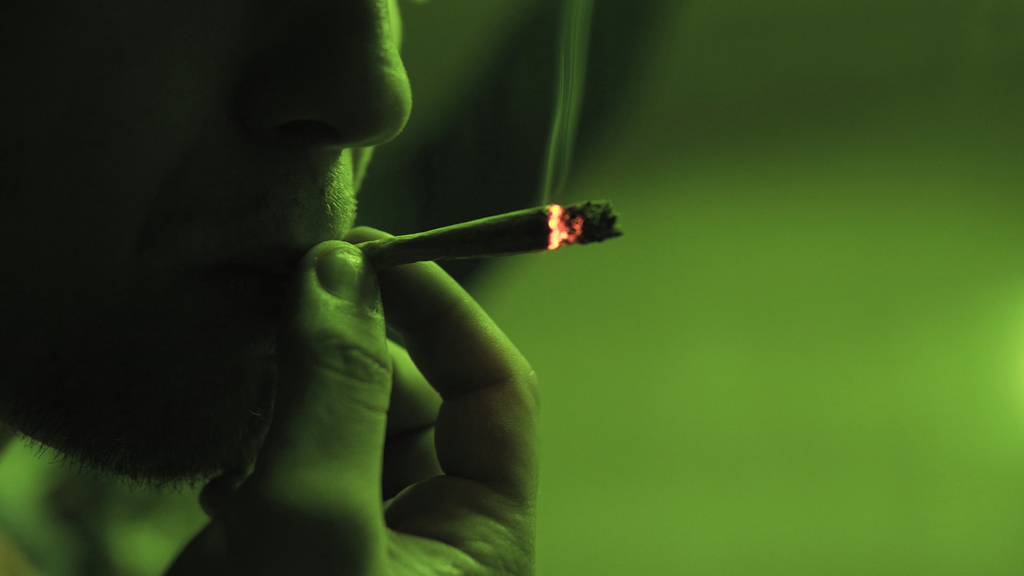 Take a look at what and how much you're putting inside your body. One Alcohol and Drug Recovery Center study found that those who abuse substances are five to ten times more likely to experience sleep disorders or disturbances. Why? Simple: most substances disrupt REM sleep. Continuous abuse and sleep disturbances causes the body to go for a long period of time without deep sleep. And deprivation of deep sleep comes with an accumulation of nightmares.

13
You're Going Through Withdrawal Symptoms

While relying on substances can send nightmare frequency through the roof, quitting those substances cold turkey can have the same effect. For example, if you drink an excessive amount of alcohol daily and then stop or reduce the amount significantly, you can develop Alcohol Withdrawal Syndrome (AWS). One of the most prominent symptoms of AWS is nightmares, which can exacerbate over two to three days after withdrawal—and then continue for weeks.

As you get older, sleep patterns change. Many elderly people experience sleep disturbance, but telltale signs of major health risks you might develop when older can usually be seen with nightmare-suffering earlier in life.

When experiencing nightmares, many also experience REM sleep behavior disorder (RBD), which is where people physically "act out" their nightmares with violent arm or leg movements. One University of Toronto neuroscientist found that more than 80 percent of those with RBD eventually developed a neurological disease, especially Parkinson's disease. The research found that the group of cells responsible for REM sleep appeared damaged in those with RBD, eventually spreading to damage the areas of the brain that can cause Parkinson's or other neurodegenerative diseases, such as dementia.

Nightmares can be linked to a variety of health problems, including the number one leading cause of death in the world: heart disease. A 2003 Netherlands Journal of Medicine study found that the percentage of irregular heartbeats and spasmodic chest pain among elderly women and men who experienced frequent nightmares was much higher than those who rarely or never experienced nightmares. During nightmares, our heart rate increases and blood pressure rises. This accumulation over time can lead to more heart problems later down the road.

16
You May Have Chronic Pain

A Sleep Research Society study found that amongst patients suffering with burn pain, 30 percent of their dreams had associated pain sensations. Another study published in the Open Pain Journal found that patients with chronic back pain reported more pain sensation dreams than those who did not suffer from chronic back pain. Chronic pain sufferers are also more likely to get less sleep, which is a reoccurring factor in increased nightmares.

17
You May Be At Risk of Suicide

Most mental health disorders have the possibility for associated nightmare symptoms. Unsurprisingly, nightmares are also linked with increased suicidal thoughts, attempts, and death by suicide. The longer someone suffers with nightmares, the greater the risk of suicide is. In one Psychiatry Research Journal study, researchers found that those who experienced weekly or monthly nightmares reported higher levels of hopelessness than those who reported yearly or no nightmares. Hopelessness was found to have a major contributing role in an increased risk of suicide. And to be able to spot any possible signs, learn all about these Suicide Warning Signs Hidden in Plain Sight.