These are the best good boys (and girls) keeping our cities safe.

For more than a century, law-enforcement agencies across the world have used animals to help fight crime. (In fact, in 1888, bloodhounds even helped look for Jack the Ripper.) And because these animals are so committed to bravely fighting crime, they also deserve to be celebrated. So without further ado, these are the most adorable animals that also double as tough police crime fighters. Not only are they incredibly courageous, they're also insanely cute. And for more adorable animals that are licensed to kill, check out these 33 Adorable Animals That Are Actually Deadly.

Just last month, the Woodmere Police Department in Ohio welcomed its newest officer to the force—and his name is K9 Revan. After some much-needed training in drug and explosives searches, crime-scene investigations, and locating missing people, this adorable German Shepherd puppy will hit the streets to protect his town, according to Fox 8 News in Cleveland. And for more animal stories to warm your heart, check out The 30 Most Adorable Animal Stories of 2018.

Sworn into the Troy Police Department in Michigan last May, Pawfficer Donut, a tiny tabby, was brought on to boost morale at the station and help raise money for the Michigan Humane Society. And while that might seem like a lot of responsibility for such a little guy, this adorable promotional video proves that the tough feline is up for the job. And for more purrfect animal photos, check out these 30 Funny Photos of Animals That Will Brighten Your Day.

Rozi, a bomb-sniffing dog from Chicago, is famous on Instagram. The day her handler, Officer Gina Ibarra, adopted her, she knew the pair would be an unstoppable force in the Windy City. For the past three years, the duo has patrolled the airport and subway stations in Chicago to keep them safe from explosives. Now, they've even become known for their lives outside their detective work. On Rozi's Instagram, she showcases her full "maniac" personality, according to CBS Chicago.

In Greenfield, Massachusetts, a Saint Bernard puppy is doing his best to help victims and survivors of trauma. Officer Donut, one of the newest canine recruits to the Greenfield Police Department, was sworn in last June to replace Officer Clarence, another Saint Bernard who retired after seven years of service. Officer Donut has quite an important job, too. Comfort dogs before him have been deployed to soothe victims and survivors of events like the Boston Marathon bombing and the Las Vegas shooting.

As it turns out, dogs have bucket lists too—and for Baxter the Basset Hound, one item on his list was to become a police dog, says his owner Shannon Hartz. So, after Baxter was diagnosed with an aggressive form of cancer, Hartz decided to make sure all of his dreams came true. Last month, the Middletown Police Department in Connecticut made Baxter a police dog for a day. Throughout the day, Baxter was able to go on patrols and ride in the police cruiser. And for more animals arresting our heartstrings, check out these 30 Animal Photos So Cute You'll Literally Melt.

Though the latest recruits to the New Taipei City Police Department in Taiwan aren't ready to serve and protect their city just yet, they are doing their best to charm and snuggle their way through training. This photo was taken just after six new crime-stopping puppies were sworn into service in 2017. The officers are still training them to be effective drug-sniffing dogs, according to Today.

Before Ruby joined the Rhode Island State Police, she was set to be put down at the local animal shelter after previous owners decided that she was unfit for adoption. But it turns out she is incredibly fit for police service. Ruby was recently awarded the Search and Rescue Dog Award of the Year, thanks to her help tracking down a young man who was barely conscious in the woods.

While the idea of therapy dogs and cats is now the norm at local police departments, bunnies are fairly revolutionary. Speedy the therapy rabbit joined the ranks of other strange animals (including a pig!) at the Healdsburg Police Department in California in 2017—and has been bringing smiles to the residents of the town ever since. Two years later, his title is "Chief Morale Officer." Now that's a job title!

Lemon, a former stray, now works for the Kyoto Police Department in Japan. When he's on duty, Lemon wears a police uniform and helps boost morale at the office. His primary responsibility is to visit the elderly with his owner and give cuddles while they're trained on the hazards of fraudulent phone calls. Lemon is great at keeping these folks calm and relaxed.

After a rough life as a stray on the streets of Bogota, Colombia, Azul the Schnauzer was given a second chance at life. His owner, military reservist Nicolas Alejandro Walteros, rescued Azul after the pup was injured in a fight with another dog. Walteros decided to make Azul an honorary police officer to pay tribute to his friends in the force.

The devoted doggie dad even went so far as to buy Azul a custom-made police outfit. And while the pup isn't out fighting crime like the other dogs on the force, he's become somewhat of a mascot for the department. "It was something they did not expect," says Walteros. "They were astonished by his dedication to the institution."

If you haven't had a chance to check out the official Instagram of the Reykjavík Metropolitan Police Department, you're truly missing out on images of the cutest police animals in the world. Take Moses, for example—the happy police cat in training who occasionally snags a front seat on patrols.

A few months ago, Annie became a therapy dog for the Chandler Police Department in Arizona—and she's already used her adorable antics to help "improve the psychological well-being of both our sworn and non-sworn employees who are subjected to traumatic events as part of their service or duties," according to KTAR News. The Goldendoodle will also do her part to provide support to the victims of sexually-based crimes at the Chandler Family Advocacy Center. That's one hard-working pup!

Late last year, after serving the Rapid City Police Department for nine years, K9 Jackson finally retired—and his retirement gift of rawhide bones was the envy of all the pups in the precinct. From boosting morale in local schools to deescalating dangerous situations, Jackson has served his South Dakota town well.

German Shepherd puppy Ruger has garnered quite a bit of attention recently for his incredible cuteness on Wellington District Police's social media. From bravely taking on the rain, as in this photo, to sniffing out narcotics on the streets of Wellington, New Zealand, Ruger proves that he is man's best friend in every way.

Ben Franklin officially became a part of the Franklin Police Department in Massachusetts this February. After his training, he will serve as a therapy dog to comfort those who have dealt with traumatic experiences in the community—as well as make public appearances at schools and community events (I mean, who wouldn't want to hug a puppy named Ben Franklin).

Last fall, the hard-working police dogs in Santiago, Chile, stole the show during the country's annual military parade with their matching jackets and booties. Along with the seasoned dogs shown here, nine adorable puppies also made their debut alongside their owners—and the world nearly collapsed because of all that cuteness concentrated in one city. 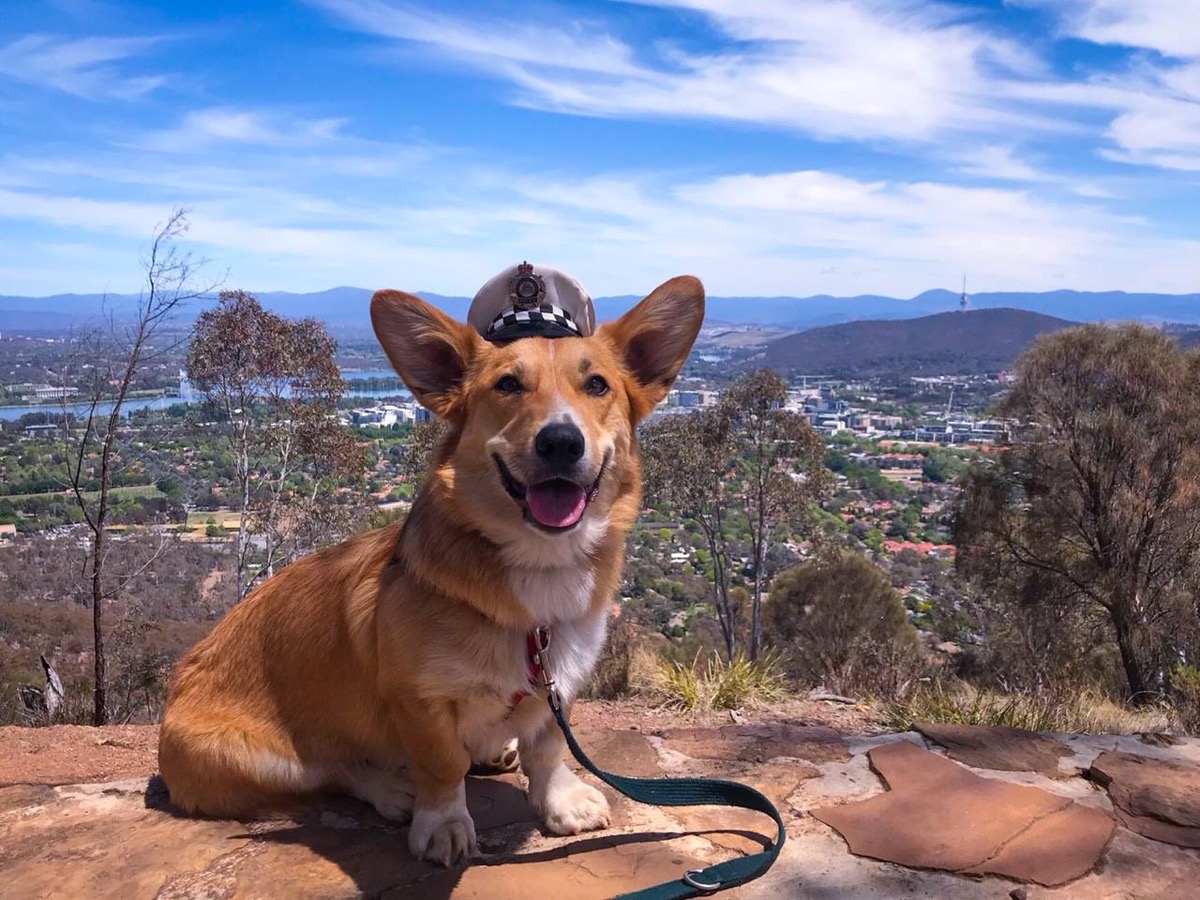 Despite Burt's hard work to get into the Australian Federal Police's K9 program, he wasn't quite tall enough to make the cut. Thankfully for this aspiring pup, though, the Australian Federal Police admired his dedication to the force—and made him an honorary member (complete with a pooch-sized police cap). According to the police, he'll be great at "pawenforcement" someday.

This good boy made his debut on the Rhode Island State Police's Twitter page in early February. Looks like he had a hard time toning down his excitement over this large drug bust in West Greenwich.

Around the world, Snickers the Police Cat was a feline celebrity. As a member of the Whangaparaoa Police Department in New Zealand, Snickers was a devoted cuddler and a local legend. And, though he passed away last year at just three years old, his presence in the police force is still remembered, as shown on his popular Instagram page. And for more famous (and adorable) cats, check out these 30 Cutest Celebrity Cats.

Ashley Moor
Ashley hails from Dayton, Ohio, and has more than six years of experience in print and digital media. Read more
Filed Under
Animals • Career • Pets
Read This Next
Latest News
Read This Next