You've grown up. It's time your shopping habits do, too.

Turning 40 can feel like a major milestone—and in many ways, it is. Your career, finances, and personal life are all hitting their apex, your confidence has hit an all-time high, and you've finally figured out a haircut that doesn't look like you did it yourself in the dark.

However, for many people, when it comes to carving out a style, sticking to those stores you loved in your younger years only serves to make you look like you're desperately trying to cling to the past. The good news? Herein, we've compiled a list of the worst places to shop in your 40s, meaning those days of logo tees and black lights can soon be little more than a distant memory.

While Urban Outfitters may have been a staple when you were decorating your first apartment at 20, but by 40, those kitschy wares have outlived their usefulness. After all, you probably better things to spend your money on than an oversized bag of stuffed cheese balls.

It's not that you're too old to shop at Nasty Gal when you're over 40, per se, but it does beg the question: "Where are you wearing that all zebra-print outfit?"

You may have once bought your ear cuffs and raver pants from Hot Topic, but as a full-fledged adult, it's time to grow up. At 40, that Harley Quinn outfit screams, "I got lost on my way to a rave," not "responsible adult." 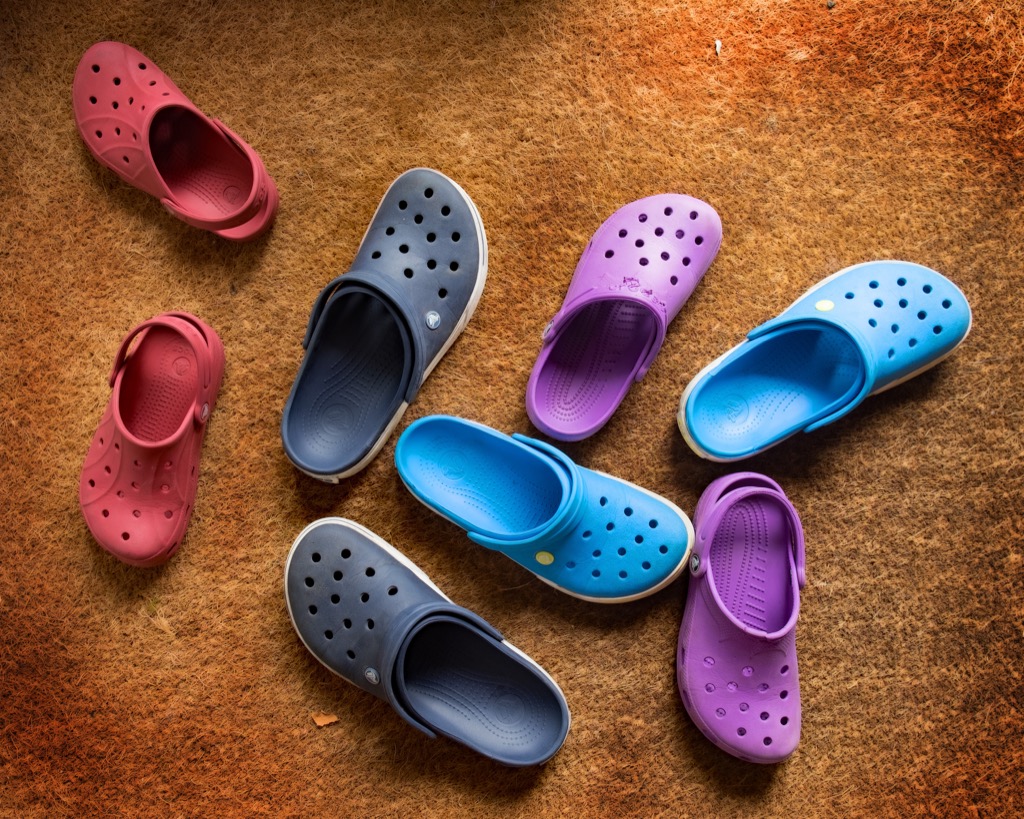 They may be comfortable. They may be the preferred footwear of gardeners. That said, if you're old enough to buy real shoes, it's time to retire those plastic clogs one and for all.

While it's not exactly like preppy style is off-limits for people of a certain age, by the time you hit 40, it may be time to put those boat-printed pants to bed for good.

The thought of walking around wearing what's essentially a billboard for someone who once willingly went by "Puff Daddy" should embarrass you by a certain point. Consider that point your 40th birthday.

The preferred shopping destination for lifeguards, surf-boarders, and the cast of Laguna Beach, PacSun probably isn't the right place to find pieces for your respectable adult wardrobe. Case in point: this lace-up cropped sweat suit doesn't exactly scream "ready for that board meeting."

Your sorority sisters may have worn them in college, but by the time 40 rolls around, it's time to retire those zebra patterns. How many luncheons are you really going to, anyway?

It may have been your go-to in high school, but proudly wearing a pair of expensive sweats with the name "Abercrombie"—or worse, "Fitch"—emblazoned on them is not a look that wears well with age. Stop trying to make Fitch happen. It's never going to happen.

With so many other stores to buy furniture from, why would you spend hundreds of your hard-earned dollars on a bean bag? In addition to making any home look like your friend's '70s basement rec room, the second your sharp-clawed pet tries to jump on one of these, you'll be stuck vacuuming up tiny white beads for the rest of your life.

If you're old enough to have a job and a 401k, you're probably past the point in your life when a halter sweatshirt could be considered a reasonable item of clothing.

Tight, overpriced, and often made out of fabrics you're likely to see covering a diner banquette, by 40, the money you might otherwise spend on American Apparel leotards and leggings could be better spent on, well, anything.

This mall staple has great clothing—if, that is, you're stuck in a Groundhog-Day-like loop where every day is the first day of Coachella.

As a general rule, by the time you're old enough to serve as the president, you're too old to wear sweatsuits with anything written across your butt.

You don't need to have a jewelry collection worth thousands by the time you're in your 40s. You don't even need to have anything particularly expensive in your rotation. That said, the time for plastic alien chokers has likely come and gone.

Those days when you played lacrosse and won homecoming king are 20-plus years in the past. It's probably time to retire those crocodile-emblazoned shirts along with them.

While sneakers may never go out of style, shopping at Journeys for ones that combine Disney characters, '80s colors, and soles that look like they've been drawn on with a sharpie, probably isn't the best way to show off your au courant taste.

T-shirts can still be a staple in your wardrobe at any age. T-shirts that proclaim you to be "spicy"? It's probably time to find yourself some more adult-appropriate attire.

Abercrombie's beach-vibe counterpart doesn't hold up to the test of time. If the overpowering scent of cologne emanating from any of Hollister's brick-and-mortar stores isn't enough to turn you off, its insistence on splashing the logo across virtually every one of its products sure should.

While people may line up to get their hands on Supreme's latest releases, spending hundreds, if not more, to wear a jacket that's not only a billboard for the brand, but the same pattern as your parents' 80s couch, is hardly a good look.

Lingerie from Frederick's may have seemed like a great place to get your unmentionables when you were in your 20s, but let's just say that those scratchy electric blue polyester robes aren't exactly the height of sophisticated sex appeal at 40.

If you're wearing sports team memorabilia somewhere other than a sporting event, it's probably time to revamp your wardrobe (or, at least, stop buying your clothes from FansEdge).

You may have absolutely loved that alien black light poster you had hanging in your room as a teenager. However, if you're still buying gifts for yourself and others at Spencer's as a 40-something, don't be surprised if the next time you see your gifts, they're on the shelves of a local Goodwill.

Buckle's casual clothes may be great for the college student trying to reinvent their wardrobe. That said, when you're spending your hard-earned money on two halves of different shirt Frankensteined together, it might be time to reevaluate your aesthetic priorities.

There's no hard and fast rule that says you have to give up skateboarding when you hit your 40s. However, those who suggest that you stop wearing cat yin-yang shirts, like this number from Zumiez, are doing you a favor.

The clothes run small. The items are so trendy they'll be out of style in a week. They're trying to bring back the tapered acid washed jean. Do you really need more reason to avoid browsing the racks at American Eagle?

While middle schoolers everywhere may have once been tricked into thinking that spritzing themselves head-to-toe with Sun-Ripened Raspberry spray was the key to making it through puberty in one piece, by 40, you should know better. And yes, your co-workers will appreciate you not coming into work smelling like a scented candle anymore.

If any of your outfits could be mistaken for a sexy leopard Halloween costume, it's probably time to stop shopping in the stores that caused such a predicament in the first place.

They may be the preferred headphones of your teenage nieces and nephews. That said, for $200-plus, you can treat yourself to better sound quality (and put less money into the pocket of the guy who introduced our culture to Eminem) with a pair of Bose headphones instead.

Rainbow's clothes are cheap—and they certainly look it. And honestly, what's the appropriate venue for a "The Struggle Is Real" sweatshirt dress, anyway?

You don't have to stop hitting the club just because you turned 40. That said, you should probably stop dressing like you're hitting the club when you're heading into the office. The easiest way to do so? Ditching Armani Exchange from your regular shopping rotation.

If your clothes look like something that would be less out of place on a '70s game show hostess than on a contemporary human body, it's probably time to bid farewell to the store they came from. Sorry, Guess.

If an item of clothing, like this Diesel jacket, has to actually spell out that it's "not cool anymore," it's likely in your best interest to listen.

Tie-dye, as well as blindly optimistic statements like "Everything will be fine" are, frankly, best left to the younger set.

Looks like it's covered in paint splatters? Check. Bears the name of the brand in huge letters across the chest? Check. Definitely shouldn't be purchased by a full-blown adult? Check.

When you're thinking to yourself, "Should I buy a pair of Uggs?" just remember that even Tom Brady couldn't make these fashion faux pas look cool.

Things you want your jewelry to be as an adult: sophisticated, understated, and made out of materials that won't turn your skin green. What you don't want it to be: a set of rainbow unicorn skeletons.

No matter how much of a Parrothead you consider yourself to be, Tommy Bahama's bright floral shirts will never be cool.

While Charlotte Russe is certainly budget-friendly, oversized t-shirts embellished with the word "vibes"—not even "good vibes," mind you—probably isn't the best way to convey how adult you are.

Sarah Crow
Sarah Crow is a senior editor at Eat This, Not That!, where she focuses on celebrity news and health coverage. Read more
Filed Under
Apparel • Over 40
Read This Next
Latest News
Read This Next