And the fascinating history behind them.

The beads! The parades! The raucous revelry! Yes, it's that time of year: Mardi Gras, where 1.4 million people descend on New Orleans to indulge in all manner of partying and celebration. (Not for nothing: The population of New Orleans proper clocks in at a little under 400,000.) Meanwhile, cities all around the country—including Mobile, Pensacola, St. Louis, and Tulsa—are breaking out into lesser-known yet equally exuberant celebrations of their own. And chances are, your local pub has at least a few dedicated drink specials.

In short, Mardi Gras is an enormous, near-unavoidable annual tradition in American life. But have you ever stopped to truly think about it? Why, for instance, do we chuck bushels of vibrant plastic beads at one another? Or why do some folks (the brave ones) twirl flaming sticks like they're little more than color guard batons? To shine light on these totally out-there traditions, we've collected the 15 weirdest Mardi Gras rituals—and the fascinating history behind them—below. 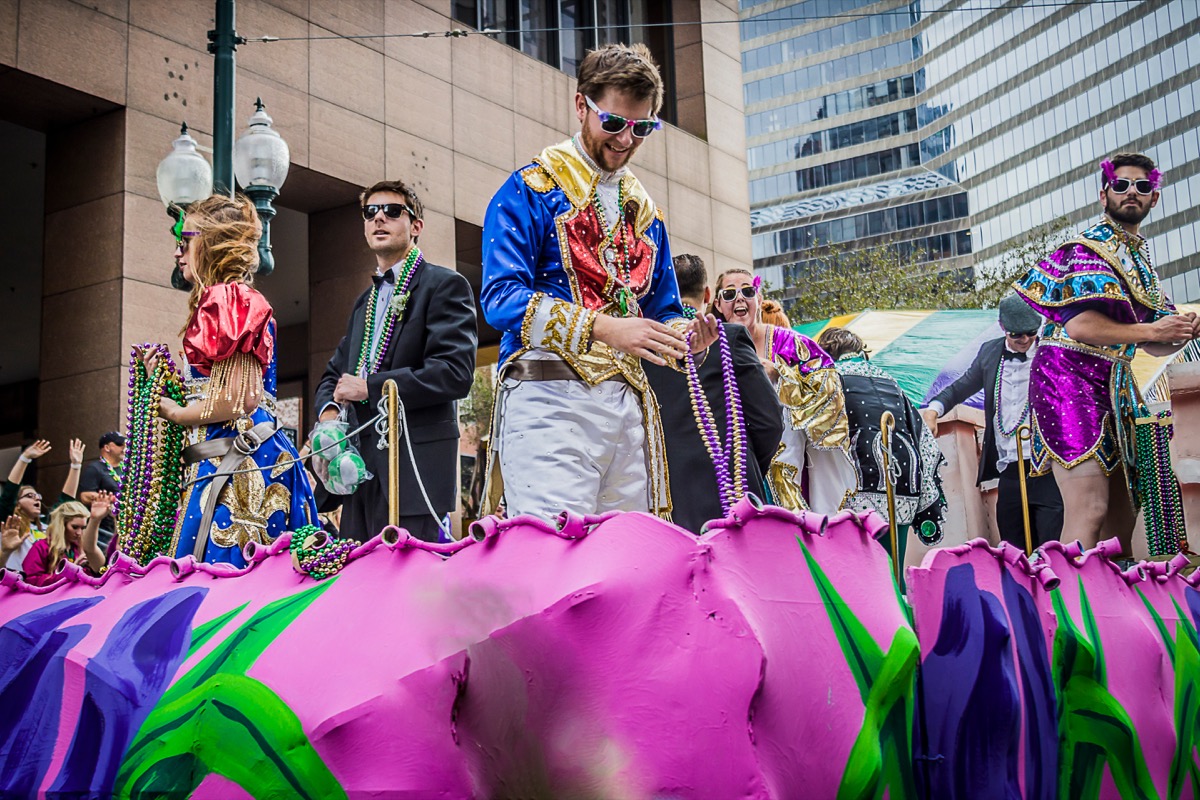 Yes, among Mardi Gras traditions, throwing beads is perhaps the most banal. But dig into history, and you'll realize how strange the ritual really is. Up until the 1970s (the exact year hasn't been pinpointed), the beads were made of glass, and served as souvenirs, from the upper class that typically rode floats in the 19th and 20th centuries, for the visiting hoi polloi. Of course, hurling glass at wide swaths of strangers was deemed unsafe, and now, the beads are plastic.

2
Handing Over the "Key to the City" 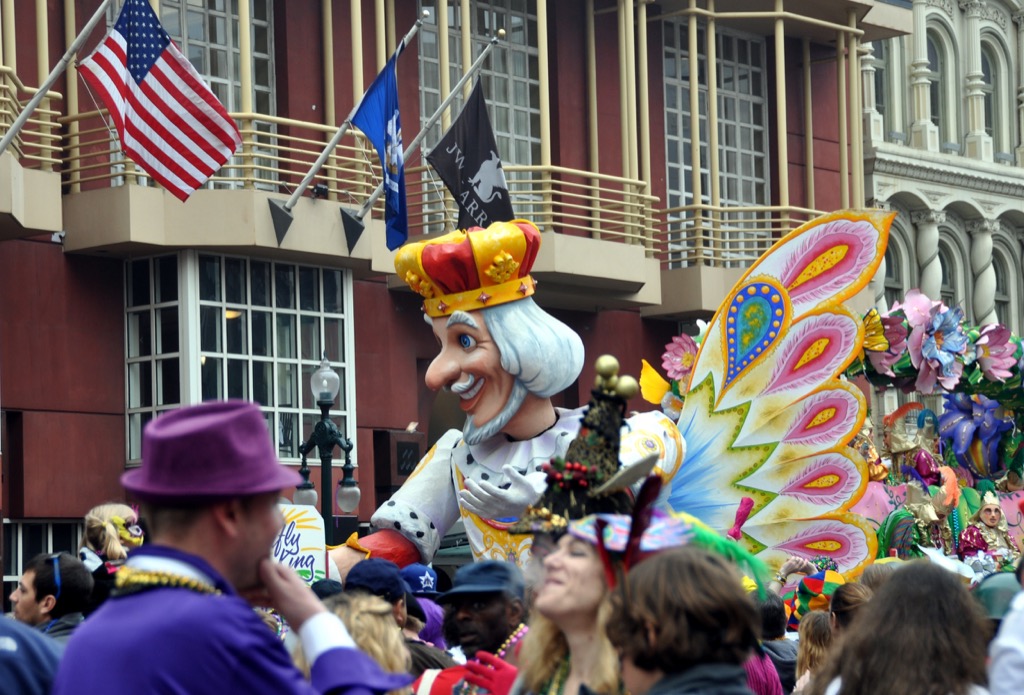 Rex, the King of the Carnival, is an entirely honorary position. Each year, the mayor of New Orleans "anoints" a distinguished New Orleans local—in 2017, for instance, the honoree was prominent pediatrician and LSU professor Dr. Stephen Hales—by handing him or her the symbolic "key to the city." According to legend, this tradition stems all the way back to 1872, when Russian Grand Duke Alexei Alexandrovich visited the city to check out the inaugural Rex parade. The role of Rex was meant to honor the Grand Duke, and it continues to this day. 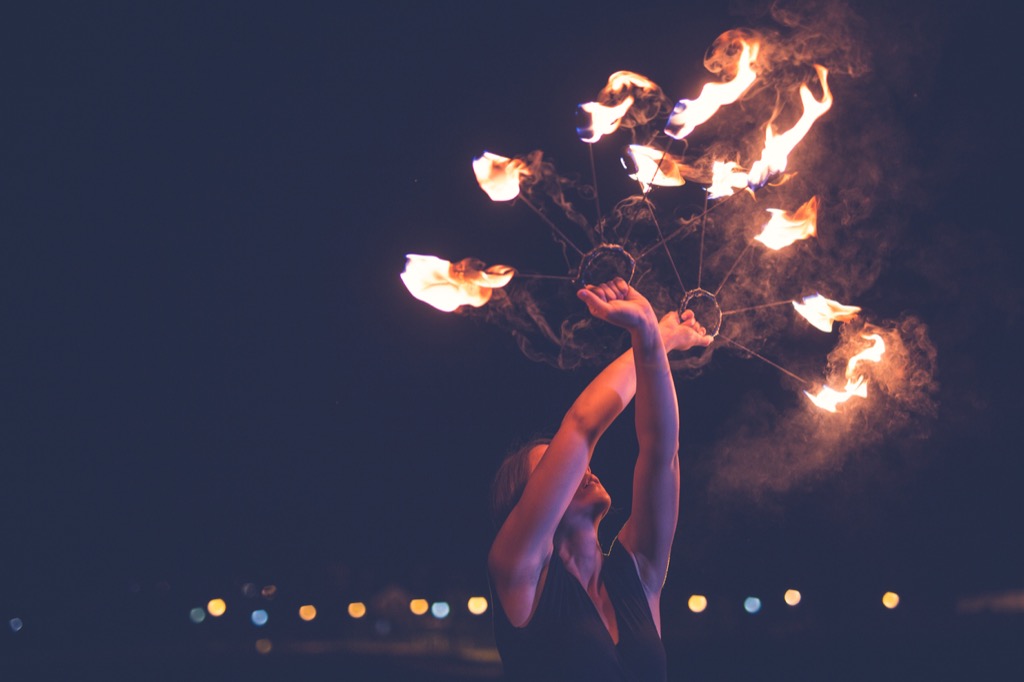 Back in the 18th and 19th centuries, electric lighting wasn't available. So, to illuminate the parades, festival organizers conscripted torch-bearers—typically slaves or free African-Americans—to march in front of each float. These days, the tradition continues, though it's more in the name of spectacle than anything else. 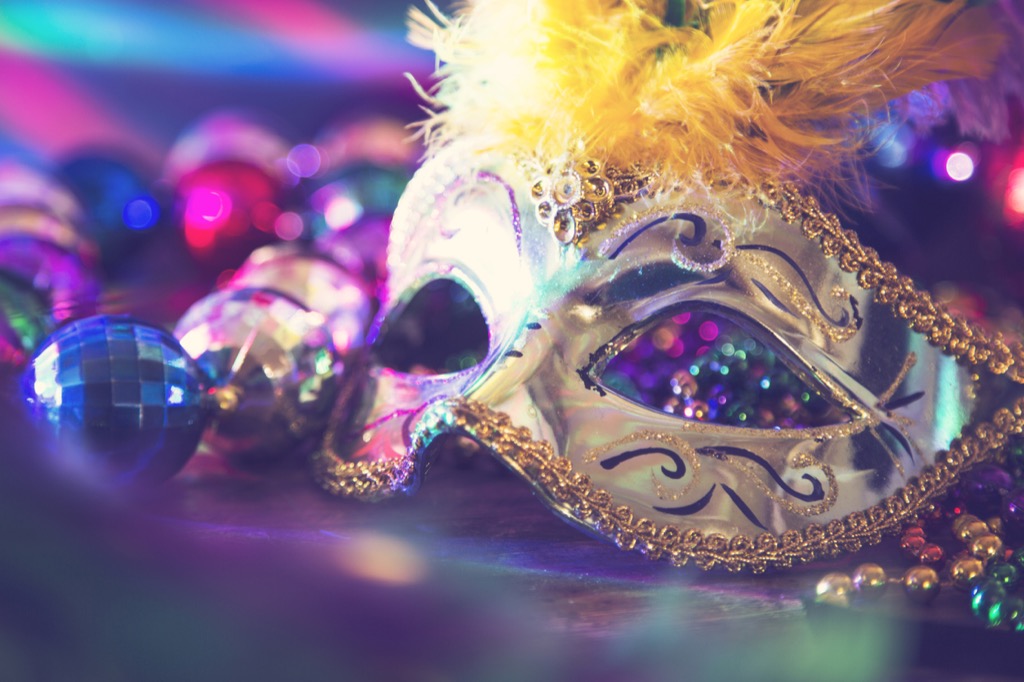 Whether it's the big one in New Orleans or a smaller one in some satellite locale, any Mardi Gras celebration is rife with masks. Originally, the masks were worn for the same reasons as the masquerade masks of 15th-century Venice: To remove any inhibitions due to social constraints by hiding your identity. But get this: Nowadays, if you're on a New Orleans parade float, it's actually required by law for you to be masked. (Exceptions are made for celebrities and other notable public figures, like Rex.) And for more trivia, don't miss the 40 Facts That Are So Funny They're Hard to Believe.

A keen eye will note that Mardi Gras parades are typically lined with vibrantly colored ladders. Though this might seem a purely decorative tradition, the origin is rooted in function: Children, short, needed a way to see the festivities, ergo, ladders.

6
Changing the Date Every Year 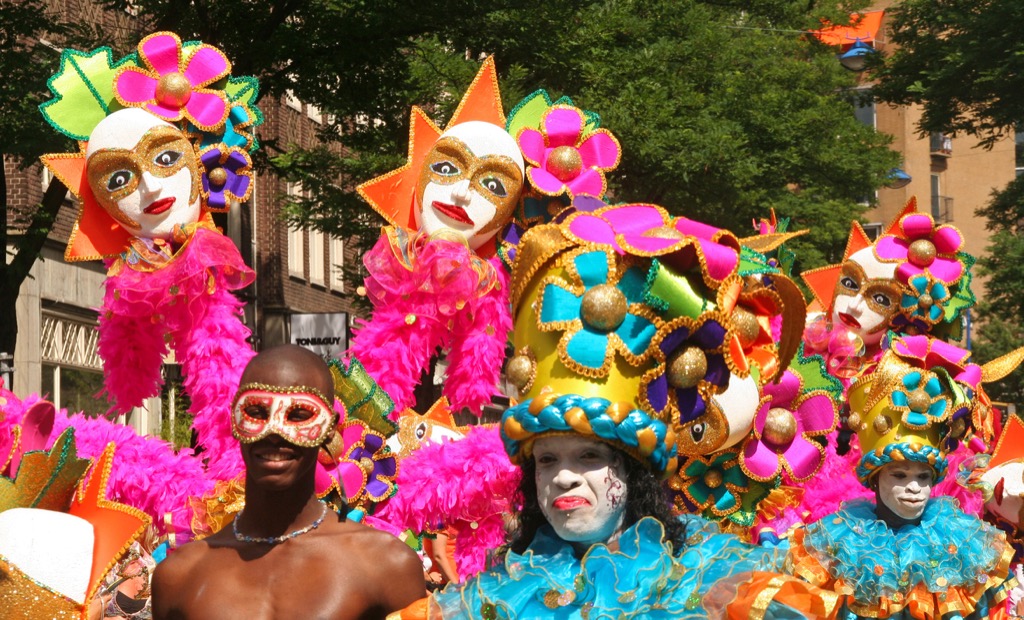 Though Mardi Gras may have picked up a reputation for debauchery, thanks to rampant alcohol and public nudity, the celebration itself stems from Christianity. Mardi Gras marks Fat Tuesday, the end of the Carnival period, which stretches from Twelfth Night to Ash Wednesday. (Mardi gras, in French, translates literally to "Fat Tuesday.") As such, like Hanukkah, the date moves every year. This year, it's March 5th. Next year, it'll be February 25th. In 2021, it'll be February 16th.

Though Mardi Gras itself stretches back to the early 1700s—or even, according to some historians, 1699—parades didn't take off until 1837, when costumed revelers took to the streets to celebrate Carnival. For about twenty years, these parades ended not unlike a post-Superbowl parade: Mildly violent and majorly destructive. For a time, New Orleans was considered banning parades, until 1857, when the Comus krewe (more on them in a bit) cleaned up the act and proved that Mardi Gras parades could be conducted as purely revelatory affairs. 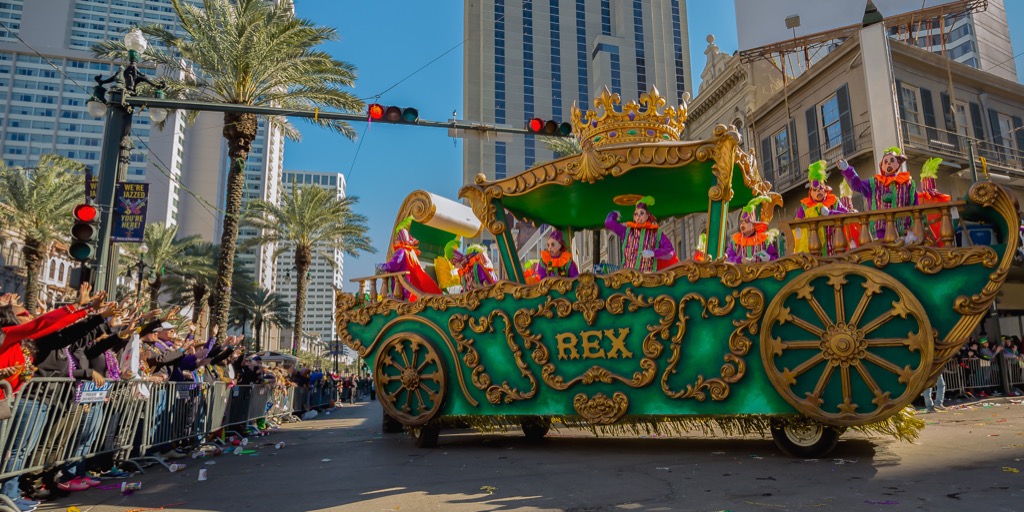 In New Orleans, Mardi Gras celebrations and parades are generally put on by so-called "krewes" (yes, that's the real spelling), clandestine social organizations that are often named after mythical figures, like Comus or Bacchus. The two largest krewes are the Krewe of Rex and the Zulu Social Aid & Pleasure Club, and they likewise put on the two major parades. 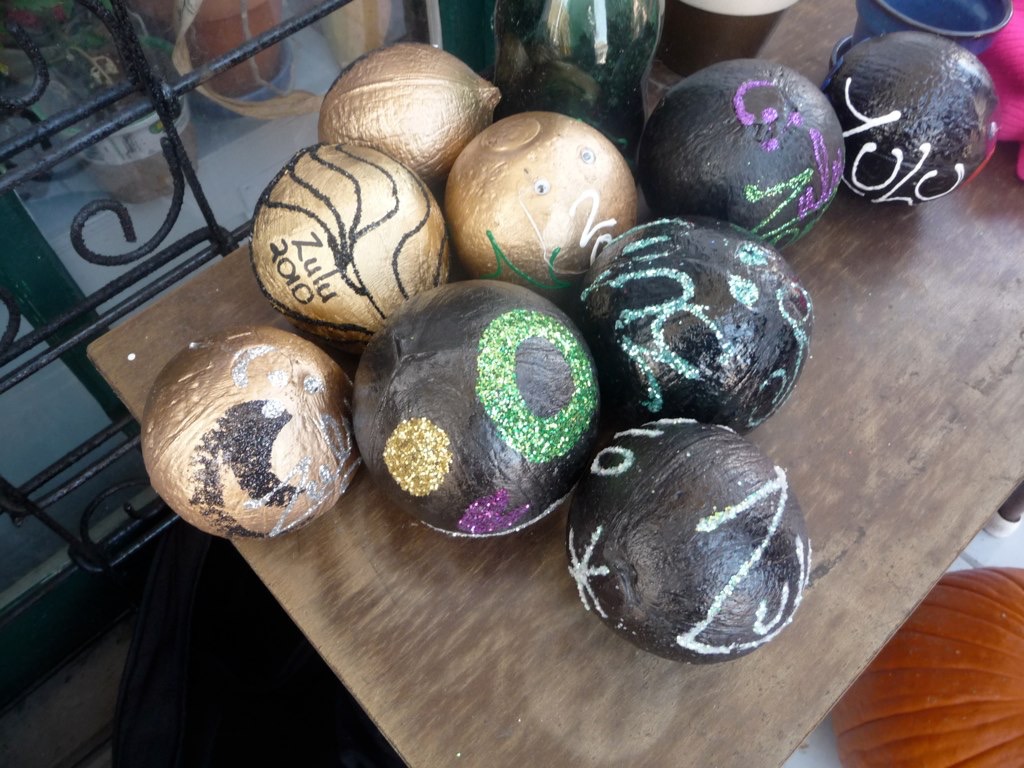 Beads are one thing, but the most coveted "throw" among Mardi Gras revelers is the Zulu Coconuts—also referred to as the "Golden Nugget." Per WDSU, the New Orleans NBC affiliate, the practice dates back to 1910; the Zulu krewe couldn't afford glass beads, so they purchased a bunch of coconuts to toss instead. At first, the coconuts started out hairy and undecorated. But over the years, the coconuts slowly became more vivacious as an answer to the sea of beads.

However, in 1987, New Orleans banned the practice of physically tossing coconuts, due to a large number of parade attendees filing injury claims. These days, expect to have any decorated coconuts gently handed.

In the 1950s, the Rex krewe was looking for a new "throw," so they conscripted local artist H. Alvin Sharpe to design a new, eye-catching idea. Sharpe came up with the idea of lightweight aluminum coins adorned with a bust of Rex. The resulting coins strongly resembled Spanish doblón, which were referred to as "doubloons" by English colonists, hence the Americanized name.ae0fcc31ae342fd3a1346ebb1f342fcb 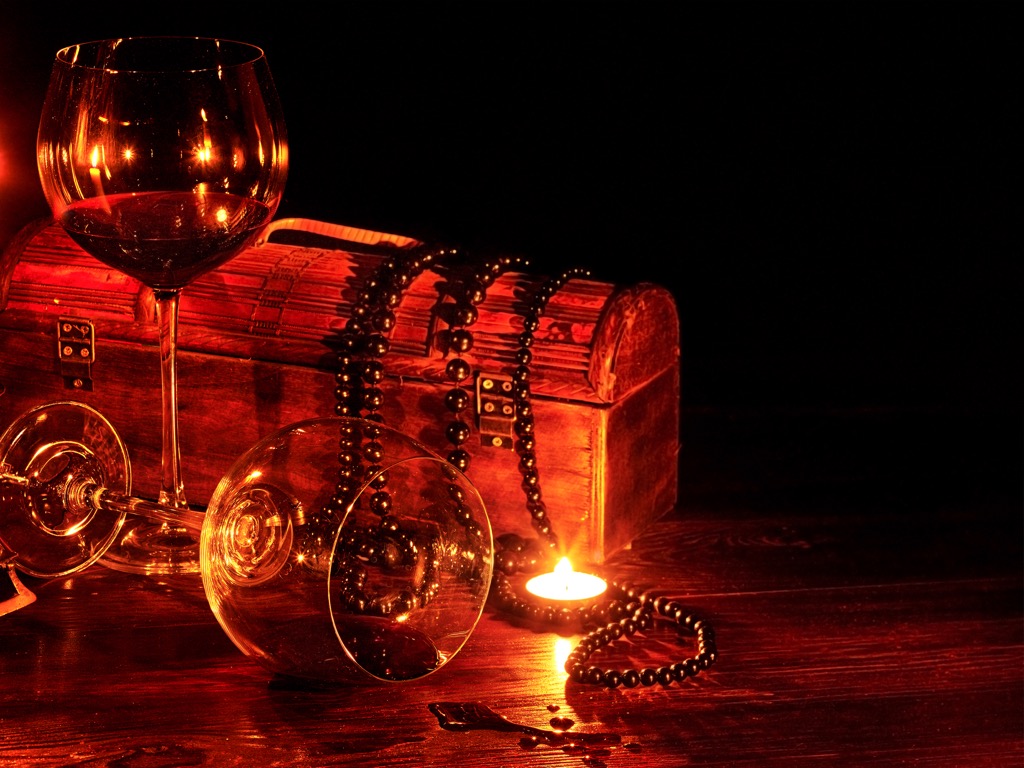 Ojen, a licorice-flavored liqueur not unlike absinthe, was the traditional drink of Mardi Gras throughout the 20th century, up to 2009, when production stopped and the final available bottle was sold. Per legend, according to The Atlantic, ojen's popularity can be traced back to two men: Paul and Oscar Gelpi, owners of a liquor distribution business who took out an armada of advertisements claiming that ojen was "superior" to absinthe in every way. Thankfully, as of January 2016, production of ojen was resumed by the Sazerac Company and is available for purchase in the greater New Orleans market (or by special order).

The first known instances of the festival's most notorious practice (if you don't know what we're talking about, Google at your own risk) dates back to 1899 in the French Quarter, allegedly as a way to attract tourists. But a century later, the trend became full-blown: According to research in Social Forces, in the early '90s, nearly 1,200 instances of beads-for-bareness occurred during Mardi Gras. 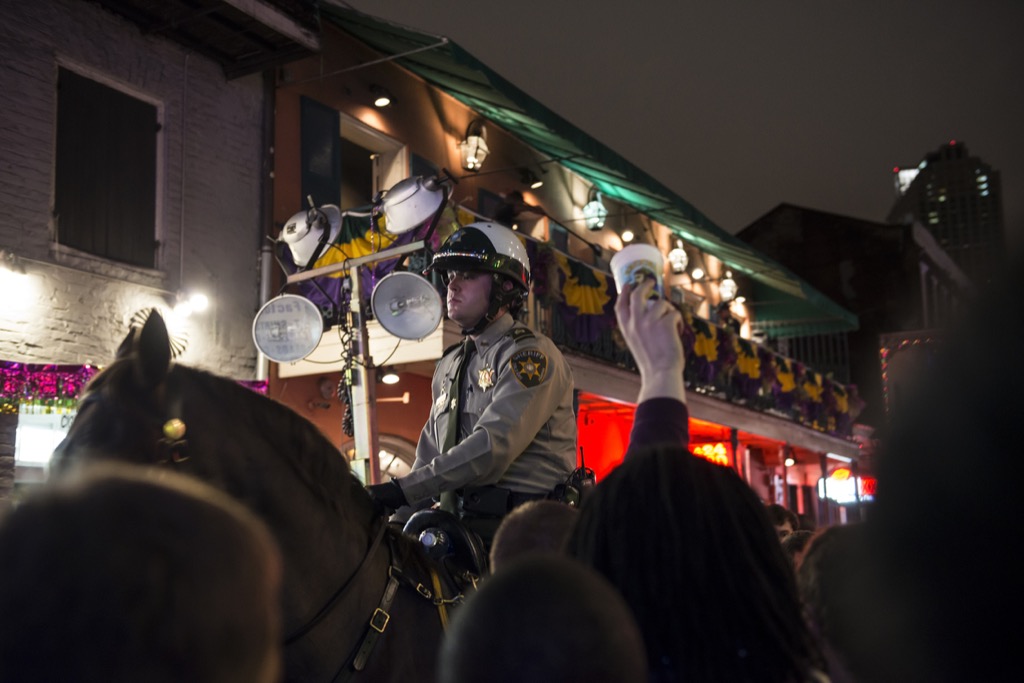 Every year, right as the clock tolls midnight, a contingent of horse-mounted New Orleans police officers rush into upper Bourbon Street and declare that Ash Wednesday has officially begun—and that Mardi Gras is officially over.

Of course, with every massive party, there's an equally massive cleanup. Since Mardi Gras is the biggest party of the year, it has the biggest cleanup, too. In fact, each year, the city of New Orleans shells out about $1.5 million on cleanup costs, most of which goes toward collecting the 25 million beads strewn around around the city—and then tossing them in landfills.

Yes, it's a fairly new tradition, but, in an effort to cut down on the scourge Mardi Gras beads, the Krispy Kreme in New Orleans offers an enticing deal: Bring in stray beads, get free donuts. For every dozen pounds of Mardi Gras beads—an amount that shouldn't be tough to cobble together in the wake of the revelry—you bring into the store, they'll give you a dozen donuts for free. This is one tradition we hope stands the test of time!

Ari Notis
Ari is an editor specializing in news and lifestyle. Read more
Filed Under
Fun Facts • Trivia
Read This Next
Latest News
Read This Next