15 Hanukkah Traditions Everyone Should Observe

There's a lot more to the Festival of Lights than, well, lights.

Hanukkah, as the story goes, celebrates a miracle. There are countless tellings, of course, but among the most basic is this: In the 2nd century B.C.E., the Maccabean Jews revolted against the reign of the Seleucid Empire. After one key battle, wherein the Jewish army banished opposing forces from occupying the Second Temple in Jerusalem, the victors found only one jar of ritualistic oil—just enough to keep candles alight for a single night. But, against all odds, the flames burned strong for eight. Hence, "eight crazy nights."

Now, before you assume some goy is lecturing you on the Festival of Lights, let's get something out of the way: I'm Jewish. Well, kinda. You wouldn't be wrong in calling me Jew-ish: definitely Jewish through technicality (my mother), though I could certainly be better about making it to Temple. (I could also probably devote more time to learning Yiddish words beyond oy vey and schmuck.)

This year, however, I wanted things to be different—not exactly to be more in touch with my faith, but to at the very least learn about it. So I went deep on mining info about all of the Hanukkah traditions I may have been missing out on. Here's what I learned. If you're anything like me, this should serve as an essential primer for making the most of the holiday.

1
Eating a ton of fried potatoes.

According to The Jewish Home: A Guide to Jewish Living, by Rabbi Daniel B. Syme, it's customary to eat foods drenched in fried oil—specifically, potato latkes, a savory concoction of shredded potatoes and green onions, done up in pancake-style—during Hanukkah. The oil is delicious, yes, but it's also symbolic of the oil that miraculously lasted more than a week. Culturally mandated fried foods? Yeah, that's one Hanukkah tradition I can certainly get behind.

2
And washing them down with jelly donuts.

Jelly donuts (sufganiyot, in Hebrew), a Hanukkah staple, also tend to be fried in oil—and are similarly consumed by the bucketload. Sign me up! 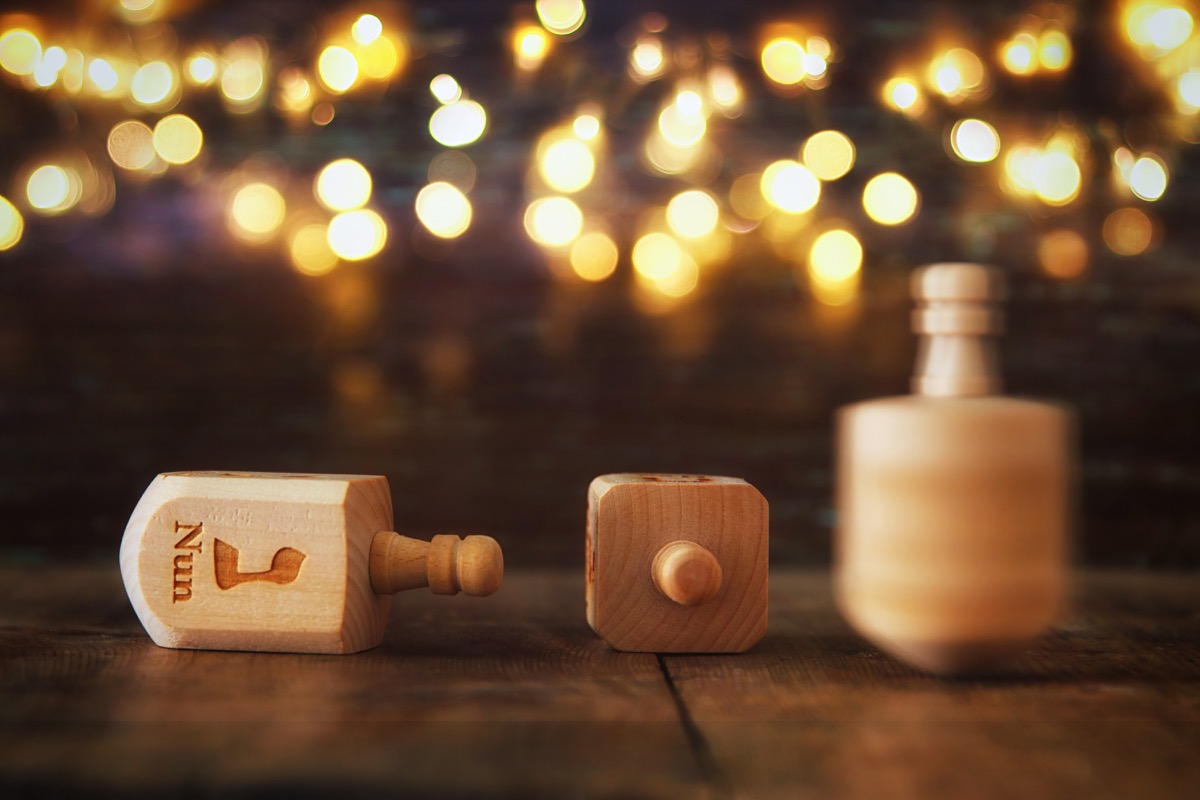 Driedel is a Jewish game that, yes, technically, you can play any day of the year. But it's both expected and encouraged that you play during Hanukkah; the Festival of Lights was one of the only times of year rabbis of old would sanction games of luck.

For the uninitiated, here are the rules: Each player antes up a number of tokens. The number of tokens vary game by game and house by house, but they can be anything—pennies, quarters, pieces of chocolate gelt. Then, players take turns spinning a four-sided top, inscribed with different characters on each side. (That's the Dreidel.) 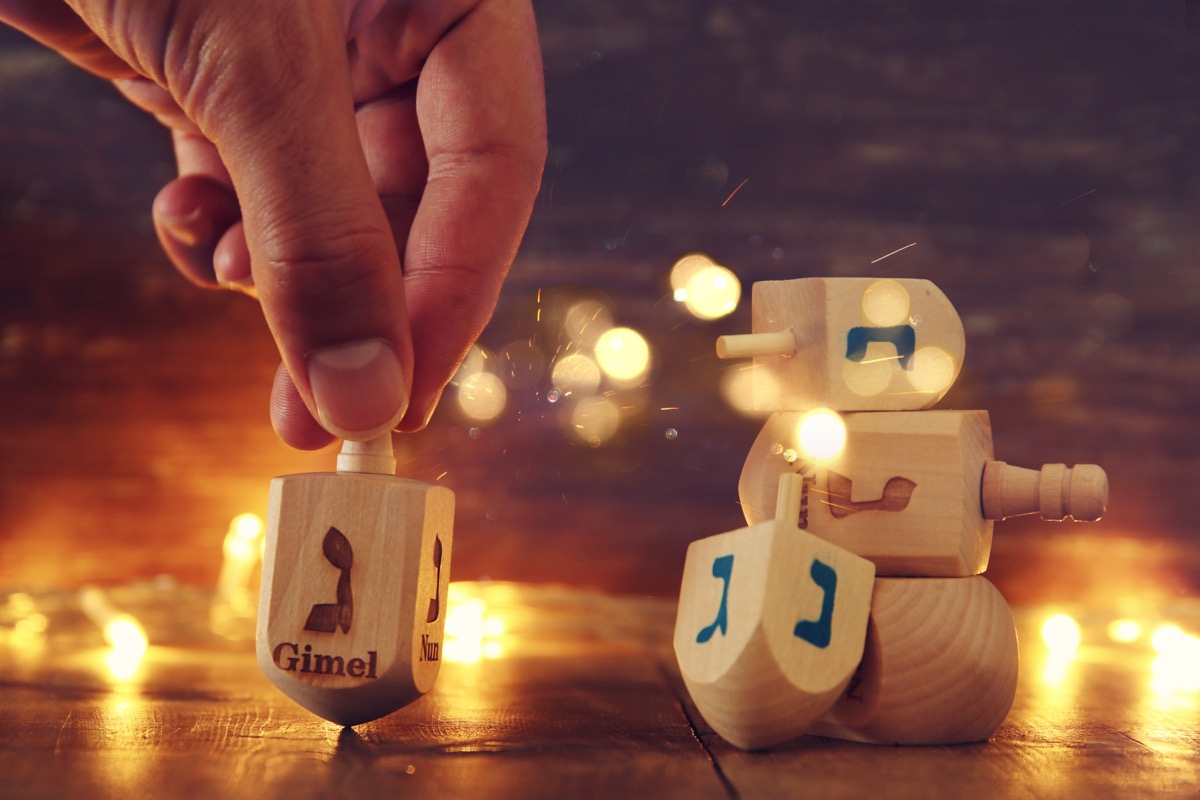 A pair of researchers from Rutgers University, writing in the journal Advances in Applied Mathematics, found that the number of spins per game of Dreidel is equivalent to the squared amount of tokens placed in the middle of each game. So if there are 100 tokens total in the game, that's 10,000 spins.

Now, to apply this knowledge in practice, you'd need the world's keenest eye and sharpest memory. But if you do, you should be able to win big. You're welcome. 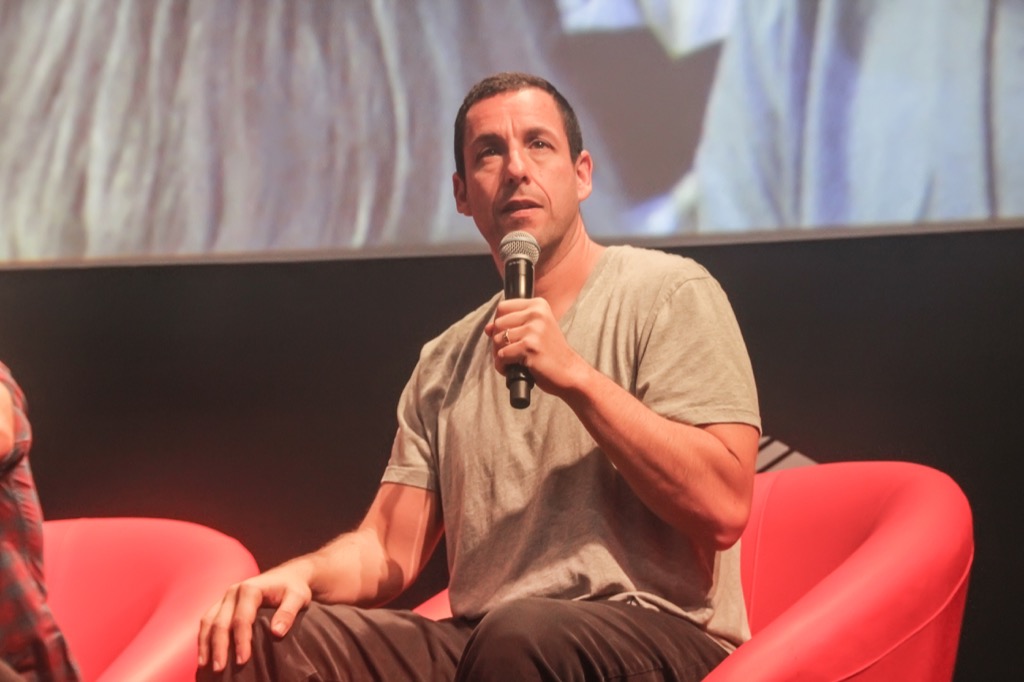 Yes, there's the old Adam Sandler classic ("Put on your yarmulke, here comes Hanukkah"). But, when it comes to traditional Hanukkah music, that silly tune won't cut it. I'm talking more about songs like "Sevivon Sov Sov Sov," the ancient folksong, and "Light One Candle," the tune by Peter, Paul and Mary. Oh, and of course "I Have A Little Dreidel," the the nursery rhyme that's permeated into wide popular culture. 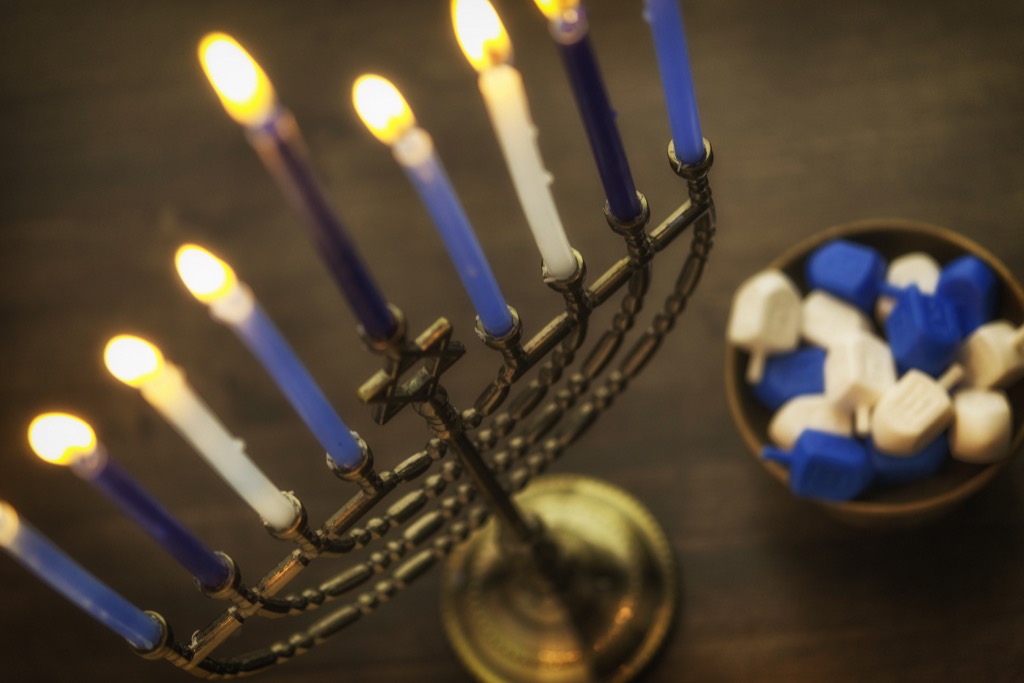 When lighting a menorah, there's an order to things; you can't just light all nine at once and call it a night. According to the Chabad-Lubavitch Media Center, the first candle—not including the shamash, the center candle—should be placed on the far right. Then, each subsequent night, you should place candles in leftward order. But wait! You'll want to light the candles left-to-right, like you're reading a book. (Do keep books far away from the menorah though. Flames and paper aren't friends.) 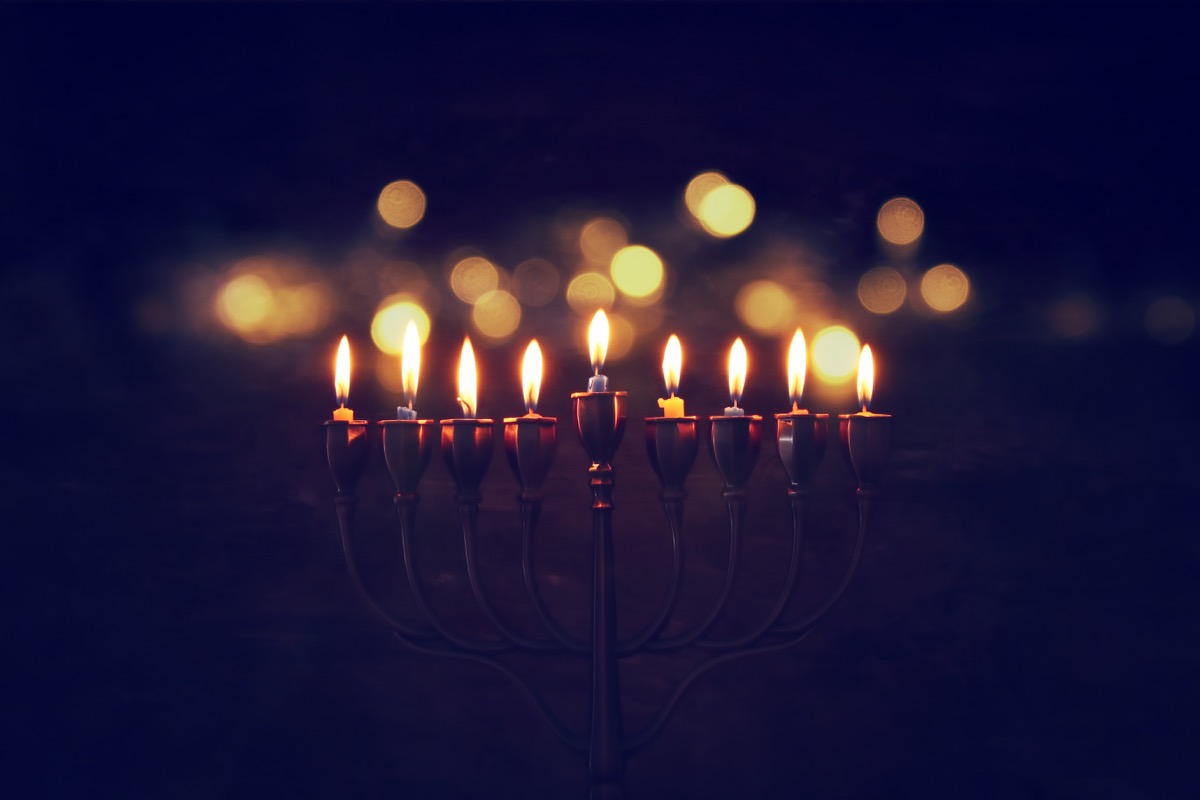 Wait—nine candles? But it's eight nights! That's right: The shamash is kept burning the entire time to commemorate the. Today, the shamash is used to light all the other candles each night. Don't let a breeze into your home. 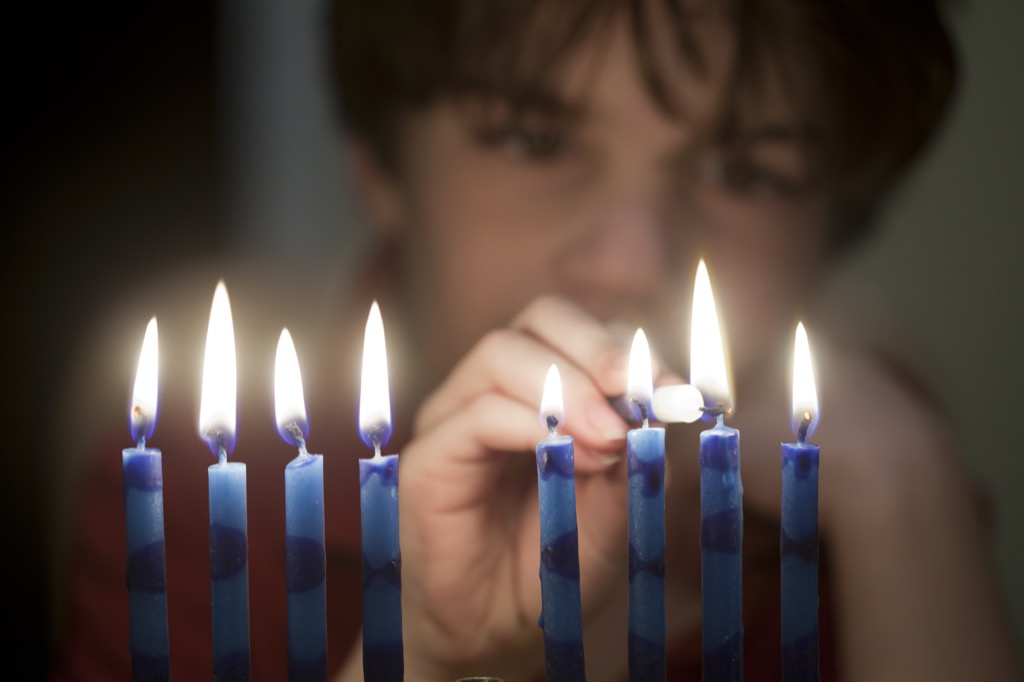 One of the best traditions of Hanukkah is this: You get a ton of gifts—one for each night. Generally, they're small. No reveler should expect something as over-the-top as a Nintendo Switch each night. But the excitement of unwrapping a gift every day for more than a week is matched by no other holiday.

During Passover, it's customary to "hide the matzoh" (usually with a few bucks near it) for one reason: It's fun for the kids, kind of like a Jewish version of an Easter Egg hunt. Some families port this tradition to Hanukkah, too, and hide their gifts each night. But, on Hanukkah, it can symbolize more than just a little game. Hiding presents serves as a stand-in for the Torah, back when Jewish people had to keep it hidden, secret and safe, out of fear of persecution.ae0fcc31ae342fd3a1346ebb1f342fcb

"Giving is one of the things that Jewish people are supposed to work on during Hanukkah," says Rabbi Shlomo Zalman Bregman. "And that doesn't mean something tangible, like an iPhone or what have you. It could be time. It could be love." For ideas on how to reach out in a non-materialistic manner, here are 23 Ways to Help Someone Who's Alone for the Holidays.

Handing out pieces of gelt—circular chocolate discs wrapped in gold foil, so they look like coins—is a nod to the fact that, after the Maccabean revolt, Jewish people were finally allowed to mine their own gold for the first time in history. Today, they're pretty much only used for fun and games (specifically: Dreidel) and, of course, eating.

13
Moving the date around. 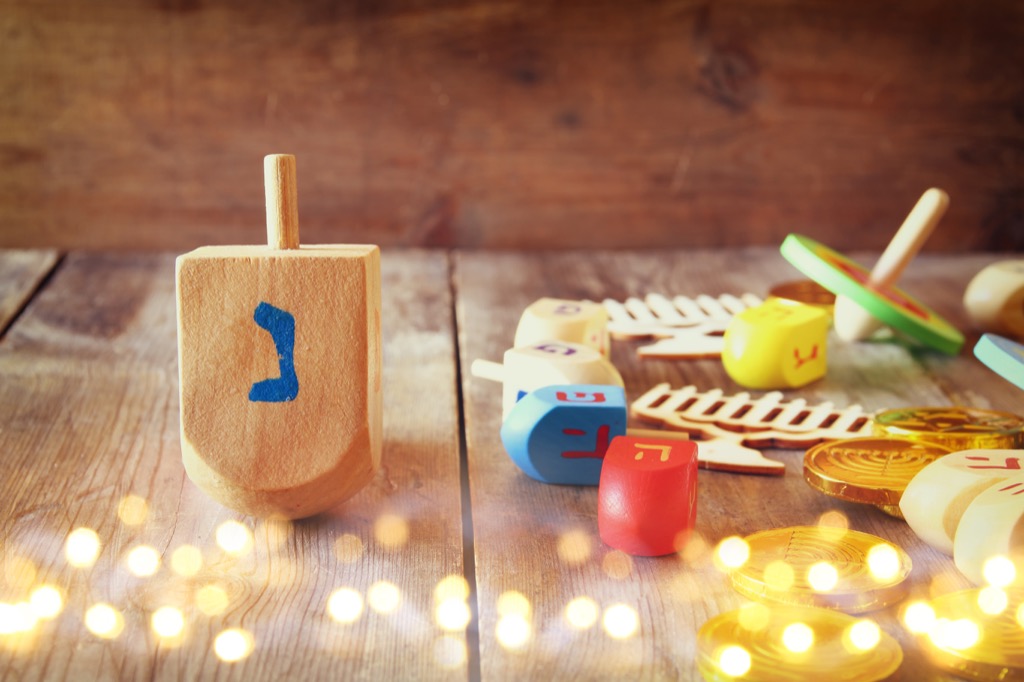 Prayer is a huge part of Hanukkah celebrations. Turns out, there are three prayers in Hanukkah. The first blesses the candles and the fire itself. The second is an expression of gratitude for the Hanukkah miracle. The third is an expression of gratitude for all mirth in life. The first two are uttered every night throughout the whole Festival of Lights. The third is uttered just on the first night. If you're interested, the folks at the Chabad-Lubavitch Media Center have a thorough breakdown on all three prayers.

15
Asking your kids or grandkids, "So, when are you gonna meet a nice Jewish girl/boy?"

Or is that just my family?