The pop star called out the new Netflix series for a joke at her expense.

Taylor Swift is not one to shy away from confrontation, and now Netflix is in the singer's line of fire. After Swift caught wind of a line on a new Netflix show that she found distasteful, she let the world know that she's not laughing. Swift called out the show by name, and took aim at Netflix as a whole. To see which show caused Swift to have bad blood with the streaming service, read on, and for another celebrity call-out, Maya Rudolph Says This SNL Host Made the Cast Want to Leave.

Taylor Swift was the butt of a joke on Netflix's Ginny & Georgia.

Ginny & Georgia, which follows a single mother and her daughter as they move to a New England town, has already earned some attention for closely resembling Gilmore Girls, but currently it's the number one show being streamed on the platform. Now, Netflix's new series has become the target of Swift's ire after a joke made in the final episode of the season.ae0fcc31ae342fd3a1346ebb1f342fcb

In the episode titled "The Worst Betrayal Since Jordyn and Kylie," the mother-daughter duo is bickering when Ginny tells her mom Georgia, "What do you care? You go through men faster than Taylor Swift." As you can imagine, this didn't go over well with the pop star. And for more celebrity content delivered straight to your inbox, sign up for our daily newsletter.

Swift called out Ginny & Georgia for the "deeply sexist" joke.

Swift didn't hold back when calling out the joke as not only careless but also offensive. "Hey Ginny & Georgia, 2010 called, and it wants its lazy, deeply sexist joke back," Swift tweeted on March 1. "How about we stop degrading hard-working women by defining this horse s*** as FuNnY." Swift didn't stop there: She went on to call out Netflix as well. And for another recent viral moment, This Resurfaced Jennifer Aniston Interview Has Fans Horrified.

The singer addressed Netflix and brought up their past relationship.

"After Miss Americana, this outfit doesn't look cute on you," Swift wrote, tagging Netflix. The documentary Miss Americana was released on Netflix in Jan. 2020. It includes Swift divulging intimate details of her life, discussing her experiences in the spotlight and in the midst of controversy, which sent her into hiding for a time. The pop star also has another production on the platform, a recording of her 2018 Reputation concert tour. "Happy Women's History Month, I guess," Swift ended the tweet.

This isn't the first time a Netflix show has made a joke at Swift's expense.

Swift is no stranger to being the butt of a joke. There's even another series on Netflix that has Swift used as a punchline. On an episode of Degrassi: Next Class, there's a similar joke made, with one character saying, "Taylor Swift made an entire career off of her exes." And for more pop culture controversy, Here's Why Everyone's Mad at Justin Timberlake Right Now.

Swift's fanbase is on the attack on social media. 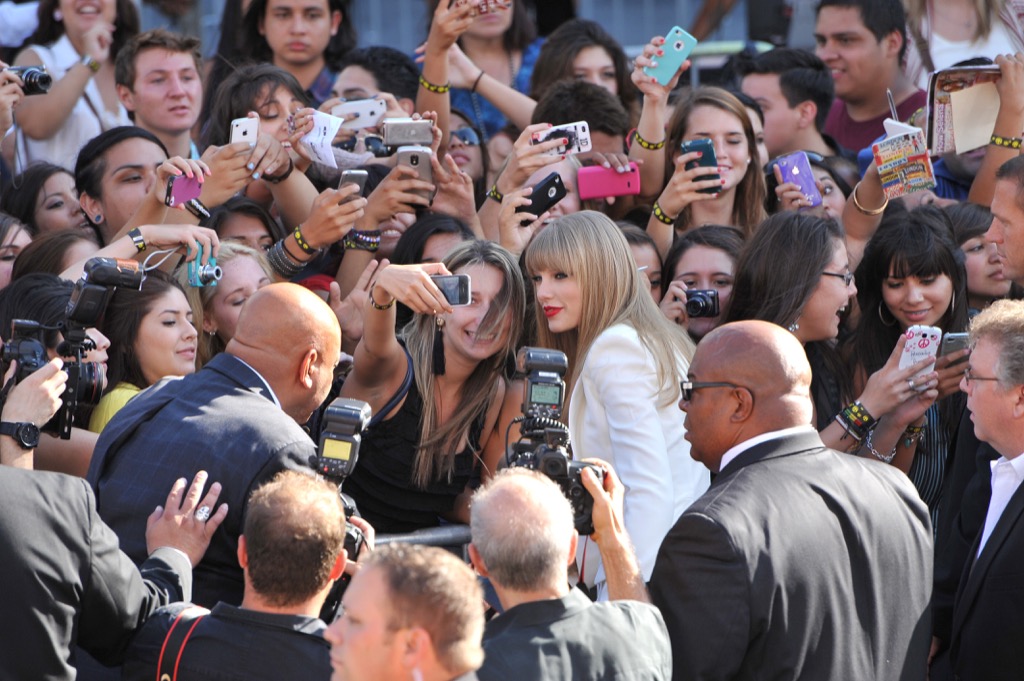 Swift's loyal fanbase jumped into action quickly. The first few posts of Netflix's Twitter account are now littered with comments, demanding the company issue an apology to Swift. "We love you Taylor" and "Respect Taylor Swift" are both trending on Twitter. The streaming platform's Instagram is not faring any better: The first row of posts has thousands of comments from angry Swift fans. Netflix has yet to comment on the controversy. And for more uncomfortable celeb situations, Jennifer Aniston Says This Was Her Most Embarrassing Moment.