Here's Why the Size of Your Wine Glass Matters

They're getting bigger and bigger, and we're drinking more and more.

It's no secret that the average person today is more of a boozehound than a century ago. According to some statistics, wine consumption in England quadrupled between 1960 and 1980, and doubled again between 1980 and 2004. And yet, whenever you read a story by F. Scott Fitzgerald, or Dickens for that matter, it seems like people are knocking back glasses of wine like Fireball shots at a college frat party. What gives?

If your guess is that it's because wine glasses were smaller back then, you guessed right. Scientists at the University of Cambridge have recently discovered that wine glasses are approximately seven times bigger than they were 300 years ago. By examining the 18th century wineglasses held at the Ashmolean museum in Oxford, London's Buckingham Palace, and ebay, and comparing them to those sold in major department stores today, researchers determined that the capacity of an average wine glass has ballooned from 66 ml (~2.2 fluid oz) to a whopping 449 ml (~15 fluid oz). For reference, the average wine pour in a bar or restaurant is 6 oz, though you'll notice that it'll be less in a fancy restaurant and a lot more at a dive bar. 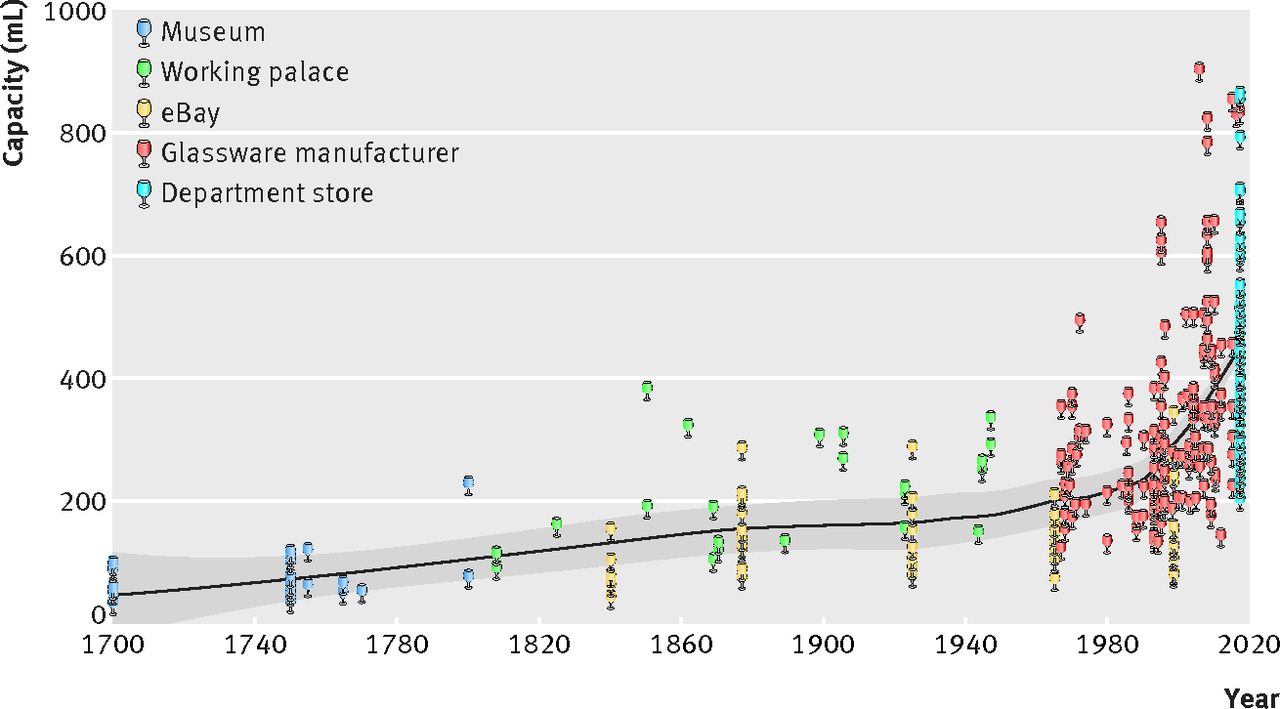 The question is: does the bigger glass encourage us to drink more? According to the researchers, the answer is (probably) yes.

"We cannot infer that the increase in glass size and the rise in wine consumption in England are causally linked, nor can we infer that reducing glass size would cut drinking," Prof Theresa Marteau, director of the Behaviour and Health Research Unit at the University of Cambridge, and lead author on the study, wrote in the BMJ feature. Our observation of increasing size does, however, draw attention to wine glass size as an area to investigate further in the context of population health. The amount of alcohol people drink, particularly wine, has increased sharply since the 1960s. Along with lower prices, increased availability, and marketing, larger wine glasses may have contributed to this rise through several potentially co-occurring mechanisms."

Factor in the fact that wine has gotten stronger in the past two decades (with some wines creeping up from 13% all the way up to 17%), and it's safe to say that we're boozing a lot more than our forebears. So if you're looking to cut back this Christmas season, consider buying smaller glasses! And for more on alcohol consumption, read up on what your boozing says about your health. ae0fcc31ae342fd3a1346ebb1f342fcb

Diana Bruk
Diana is a senior editor who writes about sex and relationships, modern dating trends, and health and wellness. Read more
Filed Under
Dining • Food • Wine
Read This Next
Latest News
Read This Next